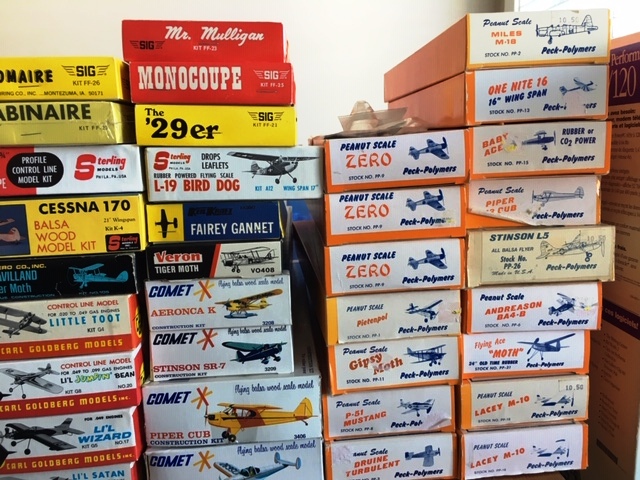 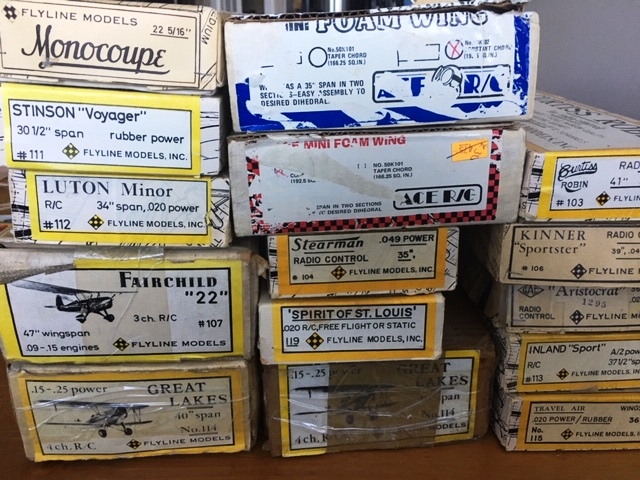 Yes Bernie, there is a market for these scale vintage kits, especially in England at least I know. I don't know USA market, but I think that rubber models are still popular in both young ages and old ages.

Very few build today. Those that do are getting up in age. The Flyline kits you show in the pic have some value to them. Ebay is the place for those models and you will be sitting on some of them for a while. The Flyline kits are the best of the bunch and generally have a good following pending on the fact that those are the desirable kits they offered. However, those that collect these types of kits are looking for pristine boxes with no tape or split or worn edges.


Those that build these types of kits like myself generally throw out all the kit wood. Nowadays, contest balsa is becoming non existent. When you factor in the cost of the kit you would need to sell them at, the required wood to make it fly correctly, most will shy away. Of course everyone now and then has the hair brained idea that they will once again build a kit they built from 30 + years ago.  This offers a bit of inspiration of impulse buying.


Comet kits were just plain horrendous. Most today wouldn't even tackle the challenge of building them especially inked print wood. They offered neat designs but they were not for the inexperienced. Most of the wood was just too heavy thus resulting in a rubber band powered tank which flies like one.

Not to sound like a downer here, what I see in the picture you show carries some merit in terms that I see kits that do have some followers. That being said, they're not going to fly out the door. Penn Valley models literally had thousands of these kits and were world known. In my 40 years of visiting that shop, many lonely kits sat on the shelves for years.

The Goldberg control line kits seemed to be desired. I can't figure out why they tend to bring the money they do.

Cox International wrote:Is there a market for those? We can buy a lot of 150 kits, all NIB.

Some 1/2A C/L & R/C kits in there too. Thay would be the more desirable ones. I built heaps of peanut scale rubber models as a kid. I don't know that many people would now days.

I can't say anything good about the Peanut Scale kits. I have a couple and they are minimal at best. Unlike Fred, I have had good luck with Sterling kits and the SIG and Carl Goldberg kit's are always good. That said, I have 22 unbuilt kits by actual count so I would not be in the market. I'm sure several others here are in the same situation.

Bob, Peck Polymer Peanut scale kits offered some very proven designs. They've been around for years. Today the kits are offered in laser cut versions. This is essentially true for most kit manufacturers. The kit fits are superior to the older methods. The wood is also generally lighter. Therefore buying a old kit is like buying a old car. How much work do you want to do on it?

What are these worth?

It all comes down to the selling price for this 150 kit lot. There are some that you will sell and others you will not. I missed out on a Brodak Stuntman23 kit at Toledo a few years ago as Brodak was packing up Sunday morning. I was willing to pay the $40US as it was the first kit I built and was never able to get it to fly. So if your cost for that kit was say $10  there could be money in it for you. But as others have said, the potential builders are all getting older.....

I think this IS a market for those kits. It may be a "Niche" market consisting of a narrow interest in flight, balsa, building old model kits. Bob recently posted a linc to a web page on Vintage Kits. HERE: https://www.oldmodelkits.com/index.php?g=flying-balsa-model-kits&mat=balsa

I have found a few groups on the "faceBook" that have very specific interests:

there are others I am sure.
they are all sorta like the Cox Engine Forum, small to medium size group of "Fans" of their specific interests.