I picked up this diesel today. I freed it up and hopefully can run it tomorrow but the weather is calling for rain. These have fascinated me for years. I would like to get it on a plane and fly it. I currently have the Drone .29 on the plane which is not up to snuff in terms of power. Hopefully this will give it some ummph but at 17 oz's, I don't know what the maneuverability will be like 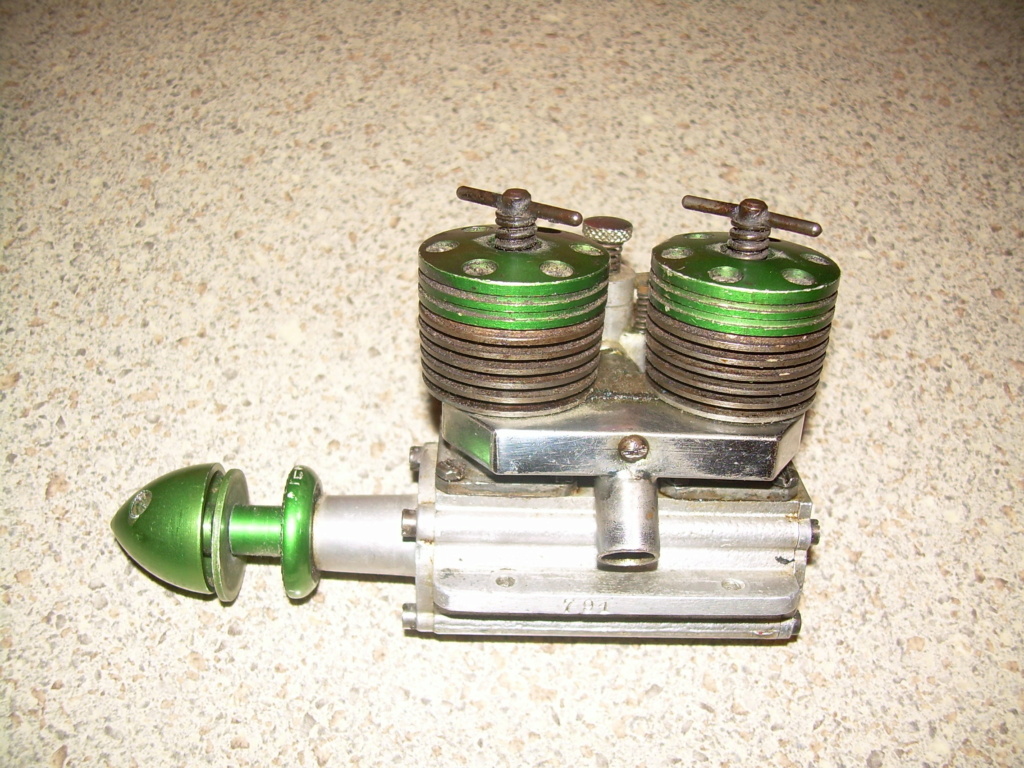 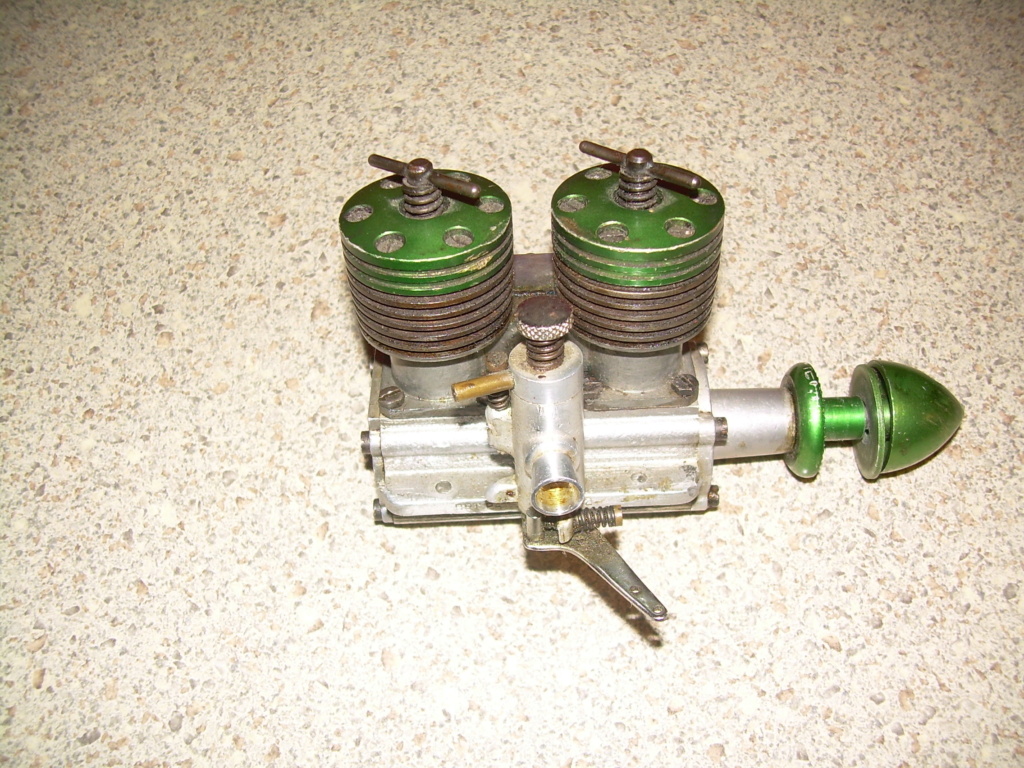 Hey Ken, I've had this 8cc taplin for a while. Locked up, but seemingly never started.
Bob 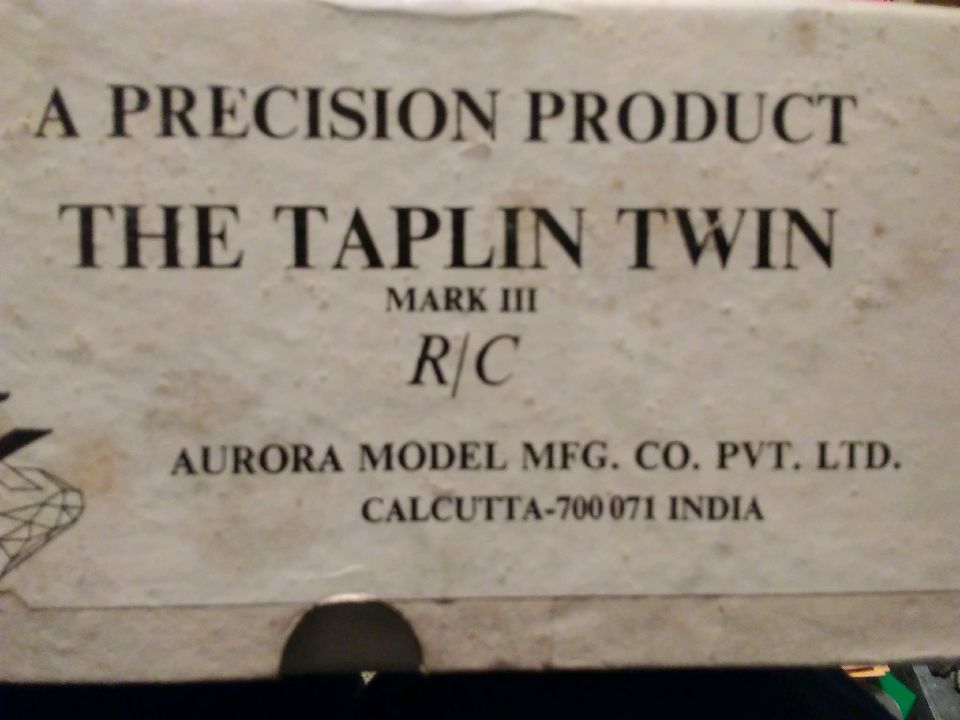 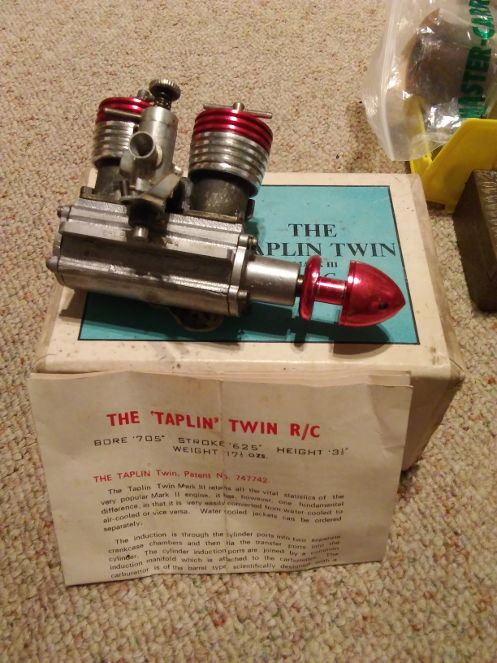 Nice Taplin , I have one just like it . They are a bit heavy , bizarre but unique . I wonder what they are worth ?? I was thinking of putting mine on a Kadet Senior .

Good grief, those are nice.  Love to own one too.

I thought Ken had them mixed up (I should have known better) with Tiapans.  Same color green anodizing as mine.

I hope to see Ken's running and in the air soon.

The title peaked my interest, but I guess the engine is a 7cc twin (and not 0.7cc) ?

Those engines look great though, and the RC carb is a great feature to have too. It is a pity the prices are a bit crazy on any of the older diesel engines around here, and the twin engines seems to be hoarded by collectors...

Pretty sure the Indian Aurora has nothing to do with the U.S. company. They made the "Kumar" range of engines and, I think, the "Curry Mills" replicas.

Do I back of the contra piston on one and concentrate on getting the other to fire and bring the other in when running? Or try to use a set number on both? I'm finding it difficult to even flip because of the alternating firing. A starter would be the best bet. I'm more or less smacking it. I have life but it just can't get it going and I know I'm not far off. The plane I have has it's nose a bit short. The beams are external and bolted onto the fuse. I can make new beams and lengthen them but this is going to put the engine out quite far.

Pretty sure the Indian Aurora has nothing to do with the U.S. company.  They made the "Kumar" range of engines and, I think, the "Curry Mills" replicas.

nice catch and I look forward to your video

The Taplins were originally British, appearig in the 50s-the original prototypes used ED 2cc piston cylinder units, whilst the production Mk1 of 7cc used modified ED 3.46 cylinders to generate the 7cc capacity-later the capacity was increased to 8cc in the Mk2 and Mk3 versions....along with the change to red anodising. Most were the marine variant used extensively y UK and other boat modellers-the aero version was rather a lot of engine for the power it delivered....after production ceased sometime in the early 70s, eventually Aurora in India acquired the rights -along with the remaining spares inventory (and presumably the factory jigs and tooling...)-the initial aurora offerings used a mixture of original and Indian made parts-but towards the end was AFAIK entirely of Indian manufacture.

There were also some very large Taplin twins of 15cc made-plus a 4 cylinder in-line job...again AFAIK these were made to special order and were never a production item by Taplin.

my example is an aero converted marine mk1...which are not convertable to air cooling (unlike the Mk2 and Mk3 models) which is a bit unfortunate as to use it in a model i'll have to come up with some form of radiator....

Thanks for the information, Chris. Do you
know if anyone ever converted one to glow,
or is that insane?

@dckrsn wrote:Thanks for the information, Chris. Do you
know if anyone ever converted one glow,
or is that insane?

that would be a sin
such a awsome diesel on glow

@dckrsn wrote:Thanks for the information, Chris. Do you
know if anyone ever converted one glow,
or is that insane?

that would be a sin
such a awsome diesel on glow

@dckrsn wrote:Thanks for the information, Chris. Do you
know if anyone ever converted one to glow,
or is that insane?

I don't know about insane....but it would be considered 'terribly bad form , old boy' to do something like that to something so quintessentially British. Seriously though-I have no idea-and since I'm a hard core aeromodeller, and not a boatie....I probably move in the wrong circles to even be aware of such heresy :-)

On a serious note-I would suggest it is entirely possible-I have in my extensive engine collection a glow ED Racer and an extremely rare (as in I've never seen another one anywhere else..) factory glow ED Hunter....which as I pointed out earlier, the P/L of which (the hunter) formed the basis of the Mk1 Taplin cylinder. now i should also point out that neither of these glow versions come close to the performance of the same engine as a diesel....and this is fairly typical of the era. Nitromethane was prohibitively expensive in the UK in the late 40s and 50s...and probably through into the 60s-hence the UK focus on diesels...add to that the greater fuel economy of operating a diesel-and I imagine that IF a Taplin was ever converted to glow, it would have proved disappointing in power output and thirstier to operate-so a rather pointless exercise....

PS I'm unsure of the detail-but I suspect that ED supplied either partly or fully machined P/L units to Taplins either on contract or simply as bulk products. It is not clear who did the actual machining to turn a Hunter cylinder into the 3-port Taplin one-having just examined my mk1 Taplin closely(mine is missing the exhaust manifold so its easy to check) the cylinders appear to be standard ED Hunter porting with an extra port cut at 90degrees to the transfer and exhaust ports where the inlet manifold is soldered to join the two cylinder units. I'm thinking that this would not have taxed ED overmuch, as they would already have the jigs and fixtures for manufacturing the Hunter cylinder, whereas if Taplins did it 'in house' they would have had to come up with all their own.

PPS. Thinking about this 'glow conversion'.....another pitfall might be that glows tend to run hotter than diesels....perhaps hot enough to melt the soldered on inlet manifold?

And here gents...for your delight an edification-are the engine tests on the Mk1 and Mk3 (the Mk2 seems to have escaped the scrutiny of the testers..!): http://sceptreflight.com/Model%20Engine%20Tests/Taplin%20Twin%207cc.html

And a special bonus.....most of you here will probably not know that Taplin also produced a 3.5cc single cylinder model, the Tempest:

....those of you with a bit of knowledge in the area will recognise this as just about a direct copy of the ED Hunter-but fitted with an RC carb and the exhaust on the left rather than on the right-and seemingly produces an identical power output

This diesel is wonderful. It started very easily and required little to no fiddling. The carb responds terrific as well. I do have a video of it running. This is truly one of those keepers. It's quiet and just a lot of fun. A bit stinky but well worth it.

This diesel is wonderful. It started very easily and required little to no fiddling. The carb responds terrific as well. I do have a video of it running. This is truly one of those keepers. It's quiet and just a lot of fun. A bit stinky but well worth it. I need to get some other props. My prop had a bit too much pitch but it worked for my purpose.

@Ken Cook wrote:This diesel is wonderful. It started very easily and required little to no fiddling. The carb responds terrific as well. I do have a video of it running. This is truly one of those keepers. It's quiet and just a lot of fun. A bit stinky but well worth it. I need to get some other props. My prop had a bit too much pitch but it worked for my purpose.

Thanks for sharing that Ken, enjoyed every second of it.

It was their absolute reliability of running and their longevity in use that made the Taplin twins so popular among the UK marine modeller fraternity....after all-if you've got a model aircraft and the engine quits, you can normally land fairly quickly and retrieve it...if its in a model boat and you're on a large lake or a deep river, and the engine quits-you have a bit of a retrieval problem if you don't have a full size boat available to you...

Nice to see the Taplin running so steadily in that video...I'm inspired to mount mine up and run it....might do that over the Xmas break.

I'll be redeploying my 8cc Taplin to more able hands.
I'm up to my chin with Cox engines, and I can't see
myself diving into diesel right now.
The one I have has "Made In England" stamped(not cast)
onto one of the crankcase beams. must have been
among the inventory initially shipped to India, after the
company was sold.
Bob

She sounded sweet Ken , like you said good throttle response too.