Who out there is familiar with the subject airplane? I acquired one that is in pretty good shape, just needed some cleaning and a repair to the elevator horn. I pulled it apart to work on it and clean it, and when I took the top pf the fuselage off, the engine is just sitting in there. There are three screws that come in from the bottom, but they barely protrude through the engine. I'm thinking they are just there to locate the engine and the top half holds it in place. Is that how it is supposed to be?? The airplane is in good shape and I think I'm the first one to take anything apart. I don't intend to try flying this one, but it has some neat looking 50's jet styling and will make a nice hanger queen or swapping and trading material.
Any one got any information? Thanks in advance!
Dan McEntee

Might be a good question for Mark Boesen. He has a large collection of airplanes or did. He knows a lot about RTF’s

Maybe shoot him a PM? He doesn’t get on here as much as he used to.

Well, to update this topic, I was able to get the mounting screws out by removing the entire brass insert assembly. I could not tell that there were inserts in there at first, and I think I got informed of that fact by some one over on the FB 1/2A group. Why the screws were run in from the bottom I'll never know, but they were really bound in with some kind of corrosion or crud that acted like loc-tite. I took a pointy hot soldering iron and pushed from the opposite side and they pushed out fairly easily and left a clean hole, It took a small pair of vice grips and another pair of pliers to get the screws out of the knurled brass inserts. I worked at a small plastic injection molding company for a while and they used a lot of little brass threaded inserts in all sorts of products that they produced. Some were in place when the parts was molded, some were put in place with ultrasonic type presses, but some were put in place just by hand using a common soldering iron and some hand pressure to push it into place. I would have never thought I would have seen this in a plastic RTF model. Wen-Mac did some things really well in their products when you look at them and think about it a bit and tis is one of them. I cleaned everything up, mixed some some JB -Weld and put a coating of it on the inserts and pushed them back into place. When that was cured, I was able t reassemble the airplane and now it's ready for it's place on the ceiling!
Type at you later,
Dan McEntee

That's a cool account of your experience with that model Dan. These old "keepsakes" (dare I call them toys..) were designed in a time where quality/longevity actually meant something. 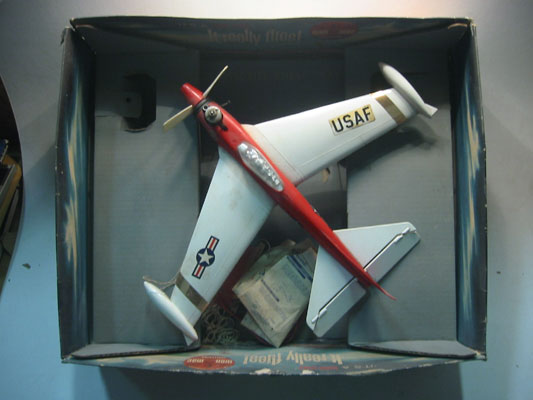 Yeah, that is exactly like mine. I don't remember where I go it, must have been in some batch of stuff I bought through the years. I wasn't going to do much with it, maybe even pass it on to some one else, but it kind of grew on me and I think it does look pretty cool, so decided to fix it up a bit and hang it up. I'll post some pics here that relate to the project. I need some practice at that! 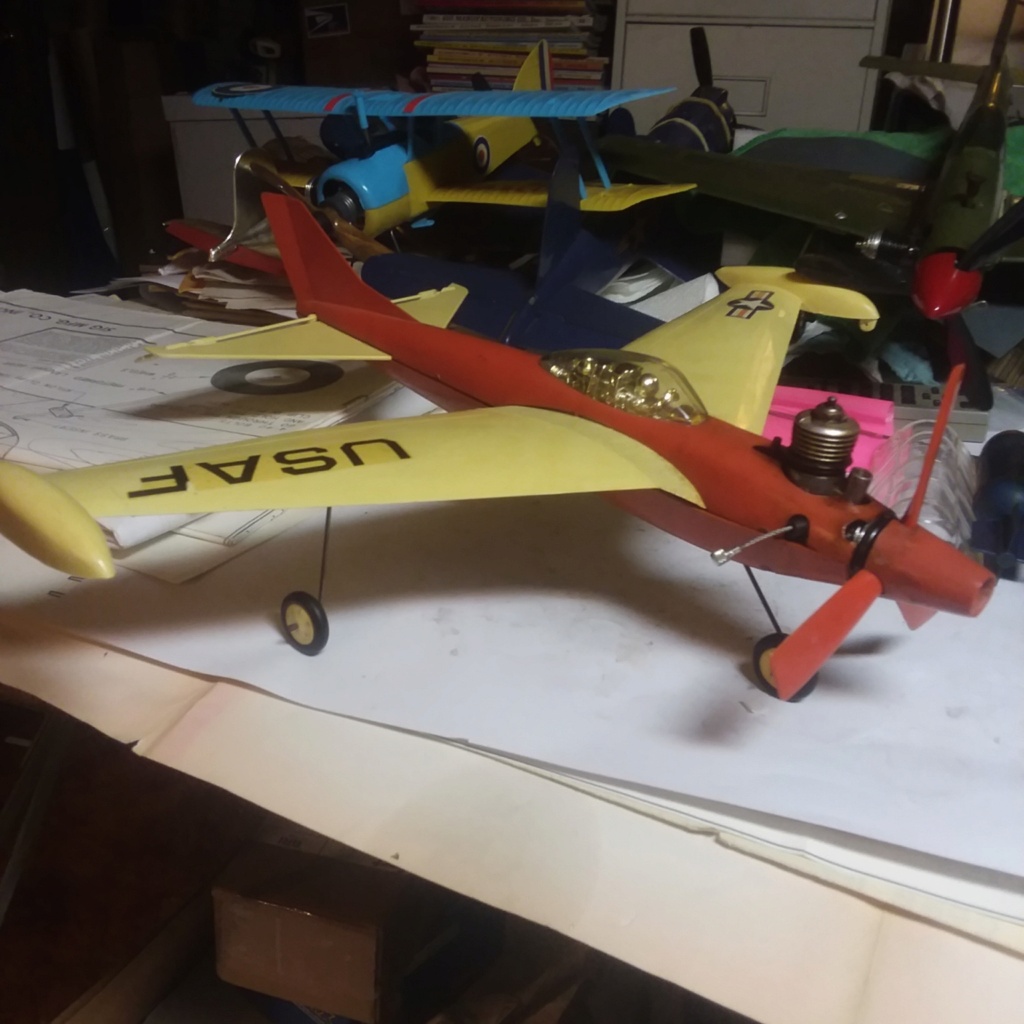 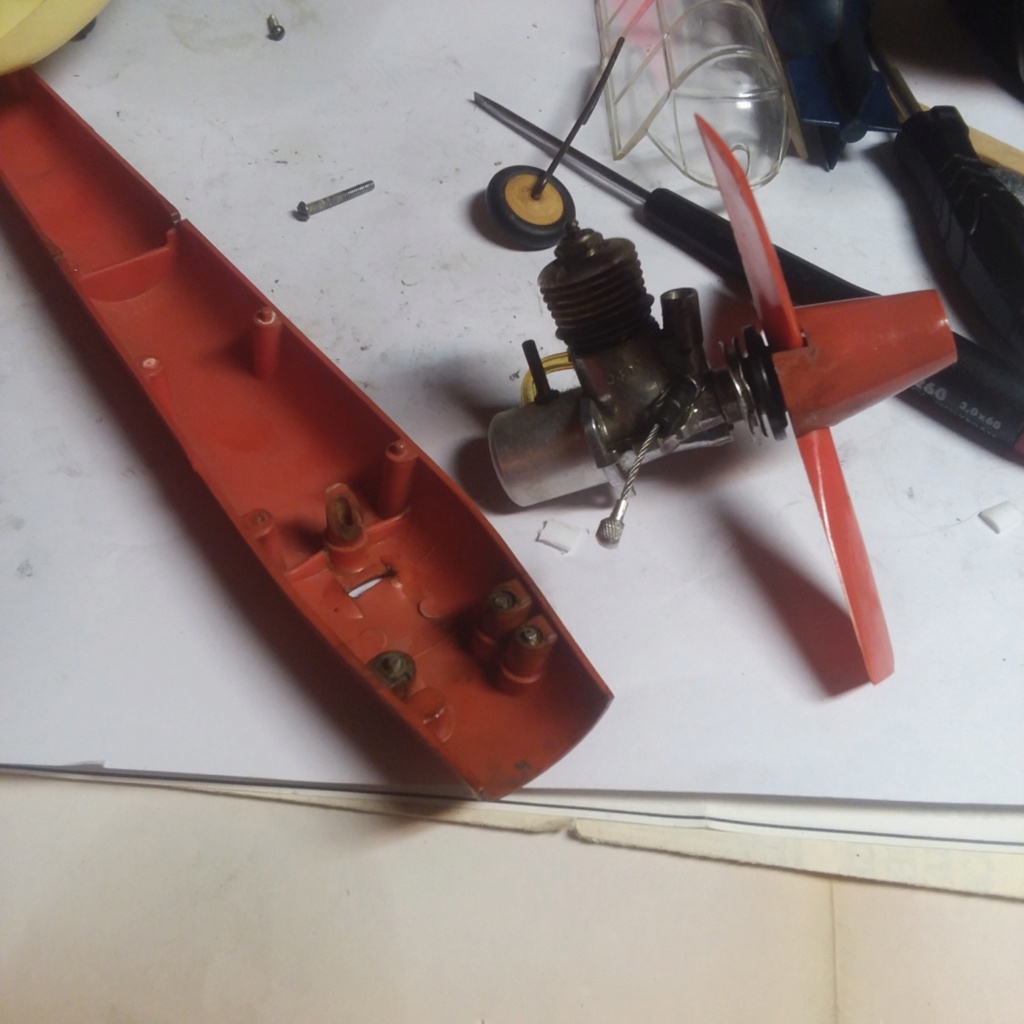 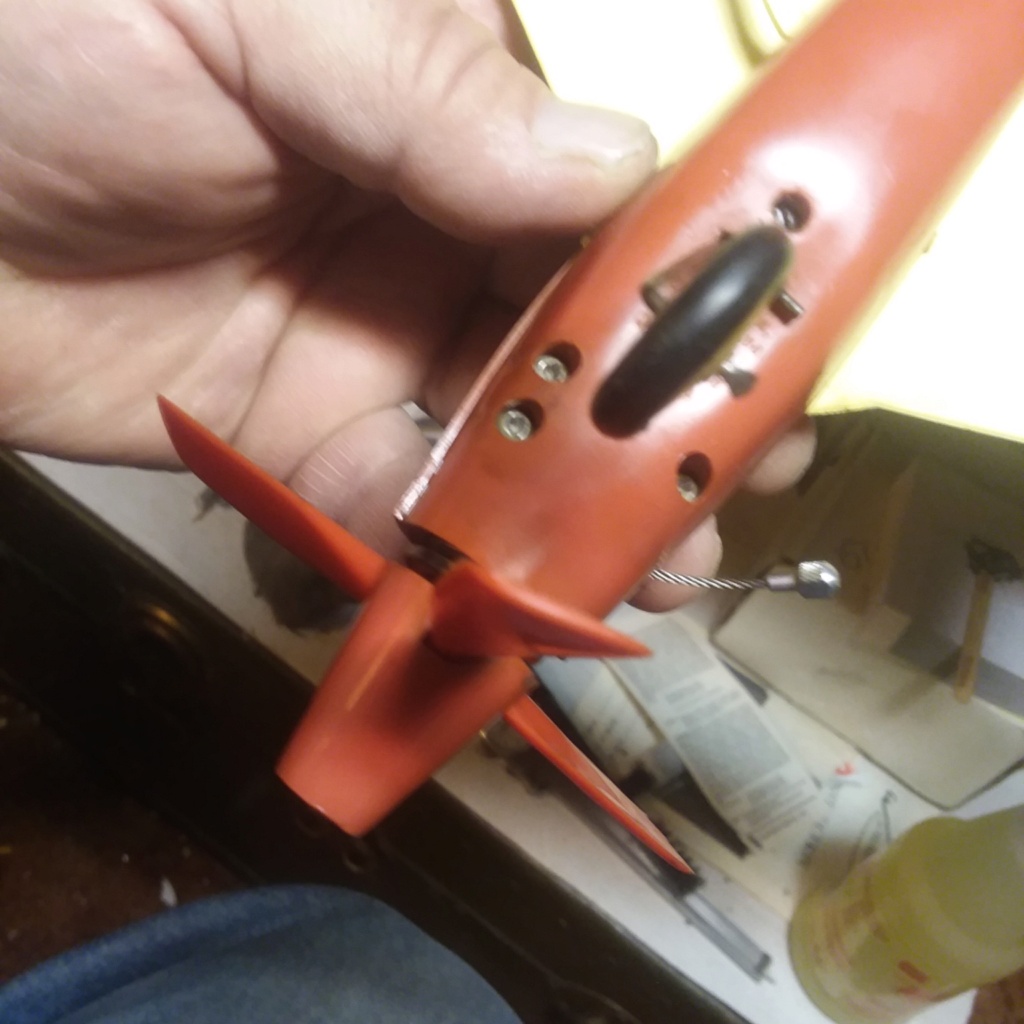 Type at you later,
Dan McEntee

Ooh, Dan, you did that plane good. I always liked the blunted spinner, I think
I've seen them on a few Wen-Mac planes. I also have to admire their use of
threaded inserts.
Thanks for sharing
Bob

Thanks Bob, but I didn't have to do a whole lot to it. it had a broken prop, a broken control horn on the elevator, and the strange issue with the engine mounts. The engine feels good and has some good pop to it, but was missing some of the pull start recoil parts. i think I have repaired regular Wen-Mac and Testors spring starter mechanisms by swapping around parts but wasn't too sure what this pull start has to it. I was just going through my 1/2A drawer and the box box of Wen-Mac/Testors engines and found another complete engine that was missing the prop drive washer, but still had the string, spring, and cord pulley with it. I'll bet this was the engine I robbed the drive washer off of for the one I repaired!! I think I have everything for repair this one if I can get the mechanism to work correctly. This engine might be missing the piston/rod assembly as the crank rotates but nothing going up and down. But it will do to figure out the mechanism and then transplant it into the Turbo Jet engine later. Right now, I got some Dauntless projects to work on! I just retired in January and just starting to get the hang of this retirement thing. Not need to put it off until later! Just pick a day and do it! I got lots to catch up on.
Thanks again,
Dan McEntee

I love when the needed parts just fall into place.
Congratulations on retiring! I just retired a week
ago this past Friday. Uncharted territory for sure.
We'll get it figured out.
Bob

Plane looks really good Dan , glad you could source parts from the dedicated draw,, Good for you and Bob on the retirement , after my disability started and brought my tools to the house at my old job were i was putting in 3 1/2 days . Then with all that time i was thinking of more stuff than i could possibly get done in a day LOL Made a list didn't take long to stop that silliness ! Thats why its called disability ,, Got to learn to pace myself was my next list.

I see you are here on CEF...I missed when you joined. I know it was quite a while ago, but I'm used to "seeing you" on Stunt Hanger...so I was pleasantly surprised to see you pop up here.
Welcome to CEF!

I see you are here on CEF...I missed when you joined. I know it was quite a while ago, but I'm used to "seeing you" on Stunt Hanger...so I was pleasantly surprised to see you pop up here.
Welcome to CEF!

Thanks for the welcome. With this retirement thing, I have a bit more time to "get around" the internet and my favorite sites. I have a discipline problem where I just can't get in and get out some times and spend more time that I really wanted to. So much neat stuff by so many neat people. I hope to share some of my stuff in photos here in the near future now that I have the time. I am going to be clearing out some extra and un-needed parts also in the near future as I try to return some order to my garage and basement. Thanks again and stay tuned for further developments as they become available!!
Type at you later,
Dan McEntee

I can't wait for retirement...you get to have all the fun, all the time. I hope to punch out of the work force as soon as the youngest clears college. "Only" seven years more (if I last that long).

I can't wait for retirement...you get to have all the fun, all the time. I hope to punch out of the work force as soon as the youngest clears college. "Only" seven years more (if I last that long).

There lies the problem. You start getting closer to retirement age, you realise that your reserves to support retirement are lower than you'll need, so you find yourself working harder at an older age. That finishes off your already ailing body so that by the time you can retire, you're not well enough to enjoy it.
Couple of years back I had surgery on a severely arthritic elbow. Left arm and I'm right handed. Trouble is that the weakness in the left arm means the right arm now has to do twice as much work. My biggest fear is having two useless arms and the best I can do is watch you guys flying because I no longer can myself. I have an elderly friend with two shoulders that are so badly worn out he can't even lift his hands onto the steering wheel to drive. Sad to watch someone who's been so active and enjoyed doing the things he's loved for years that can no longer do the stuff he wants.