I was tinkering around with Rusty's Traveling Engines this afternoon as they're going to be heading out to Kim tomorrow. I had the RR-1 running a little better than it has been before. Still not perfect, but it does run and I think it should keep a plane in the air as it is. In a picture I took of the engines, I included an early 70s Cox fuel can. Since I was already covered in castor oil and I had everything out, I figured I would finally try out that old Cox fuel. No, I didn't run the stuff through the RR-1, although it probably would've been happy with it. I had a rough little Babe Bee floating around my starting kit box so I mounted that up, ran a tank full of "new" Sig Champion 25% through it to make sure it was in running order, then I pulled out the fuel of finely aged vintages. 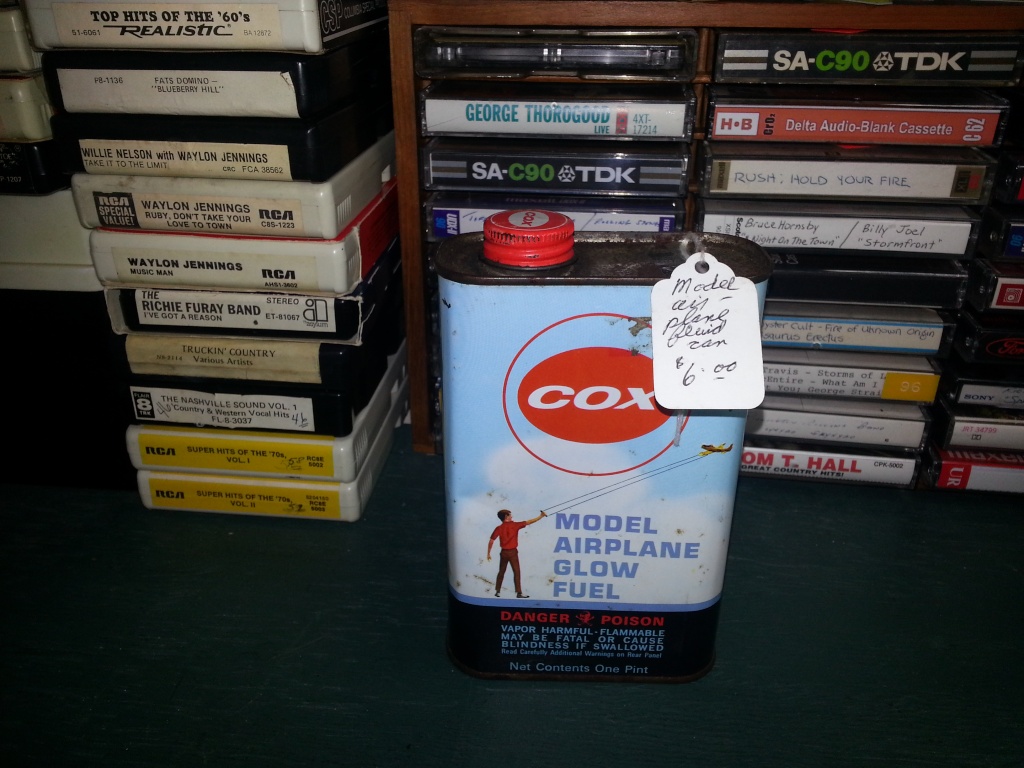 Nearly full of fuel, I remember it was difficult to get the cap off when I first opened it. The inside of the can is clean and while the fuel is a darker shade of gold, it is clear and has a normal smell to it. I bought this can at a swap meet nearly 8 years ago and never tried it until now. https://www.coxengineforum.com/t5185-went-to-the-back-to-the-50s-car-show-yesterday 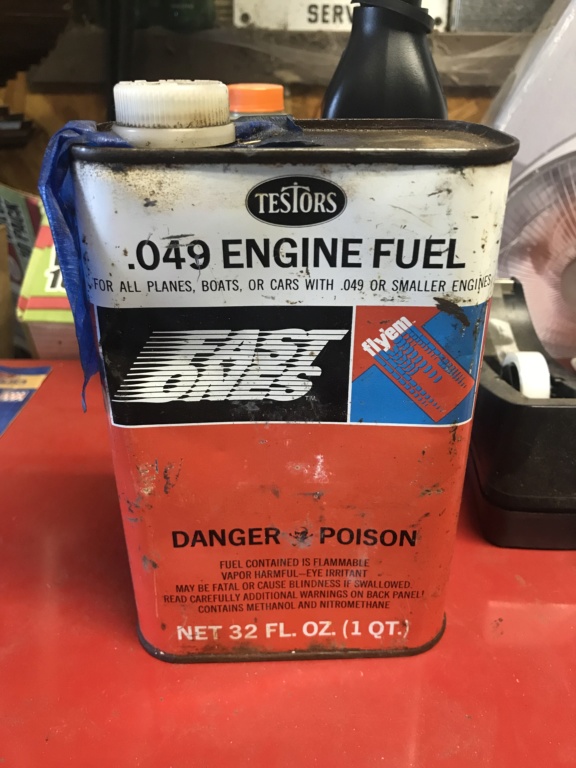 Nearly 3/4 full, I found this can of fuel at a flea market a couple of years ago. The can has some internal rust, although the fuel is clear. The can has been sitting out in the garage on the work bench since I brought it home, and it has left a little ring of oil around the base with a little bit of residue around it... so it could be very slowly seeping at the seam. It is still about 3/4 full. The fuel is a shade of pink, similar in color to the Sig Champion fuel. It smells normal and you could feel the alcohol evaporate on your fingers. https://www.coxengineforum.com/t13245-testors-049-engine-fuel-can

While the engine was still running off the Sig and starting to act like it was running out, I fed it some of the Testors fuel first as that was the can I could get open. The cap on the Cox can was too tight for my oily fingers to get open. The engine bounced back to life but performance was not the same as with the Sig. I didn't readjust the needle as it ran. I let the engine run off the Testors fuel for another couple of minutes, then I started to feed it some of the old Cox Fuel. As I fed the Cox fuel, the engine started to even out and run more smoothly. Unfortunately, I didn't get all of that on camera.

What I did get on camera was the last few minutes of the engine running off the old Cox fuel.

After it ran out of fuel, I refueled it with the Testors fuel and started it back up. This time, I had to turn the needle almost a full turn open for the engine to run smoother.

You cannot go by any of the run-times in the videos as by the time I started the camera, the engine had been running for a while as I walked back and forth across the yard to grab the fuel can to include in the video. Each time, the engine ran until the fuel was gone.

After running a couple of tanks of the old Testors and Cox fuel, it was covered in a lot of oil. The engine was definitely tighter at TDC. Upon a closer look, the cylinder is coated with an excess of varnish and the inside of the glow head is now a dark brown.

I almost didn't post this as it turns out the condition of the Babe Bee isn't at its peak. Upon opening it, the copper star reed had one of its points worn down, and all the gaskets could've very well been original. The fuel pick up tube is hard as a rock as well. It's possible this engine was a "survivor", not having been "restored" (aside from a newer glow head). Before mounting it, it turned over smoothly with solid compression and you could hear the reed open and close inside. It also did run off the new Sig fuel. The engine also insisted on running "backwards", every time it was started.

I got what I wanted, the engine ran off the fuel.

But, seeing some of the aftermath and re-watching my videos, I might need to repeat these tests with a different engine, or the same engine all cleaned up.
_________________
-Jacob

At the end of the second vid. it looked like the engine was overheating ? Smoking it was LOL But that's COOL the old fuel still works even if the engine wasn't at top performance .

"The engine also insisted on running "backwards", every time it was started."

Maybe it had a clockwise crank in it!

Actually I have had some do that, very irritating!

Anyone remember the first time they ran a Cox engine, or any glow engine!!!

The first glow engine that I ever ran was a Cox Space Bug Jr. bought in 1953, sounded like Jacob's with the 50 year old fuel.  Maybe I'm wishing a bit as my hearing isn't what it used to be, but it brought back memories of that event.  Wow, I thought the first time it caught and I leaned it out, this thing is awesome.  Vivid, and I remember it to this day.

My daughter in law's grandfather gave Mark this can of Cox fuel, never been opened and the only one I have with a UPC label.  Searched UPC history and found the first UPC label was on a ten pack of Wrigley's gum in 1974. 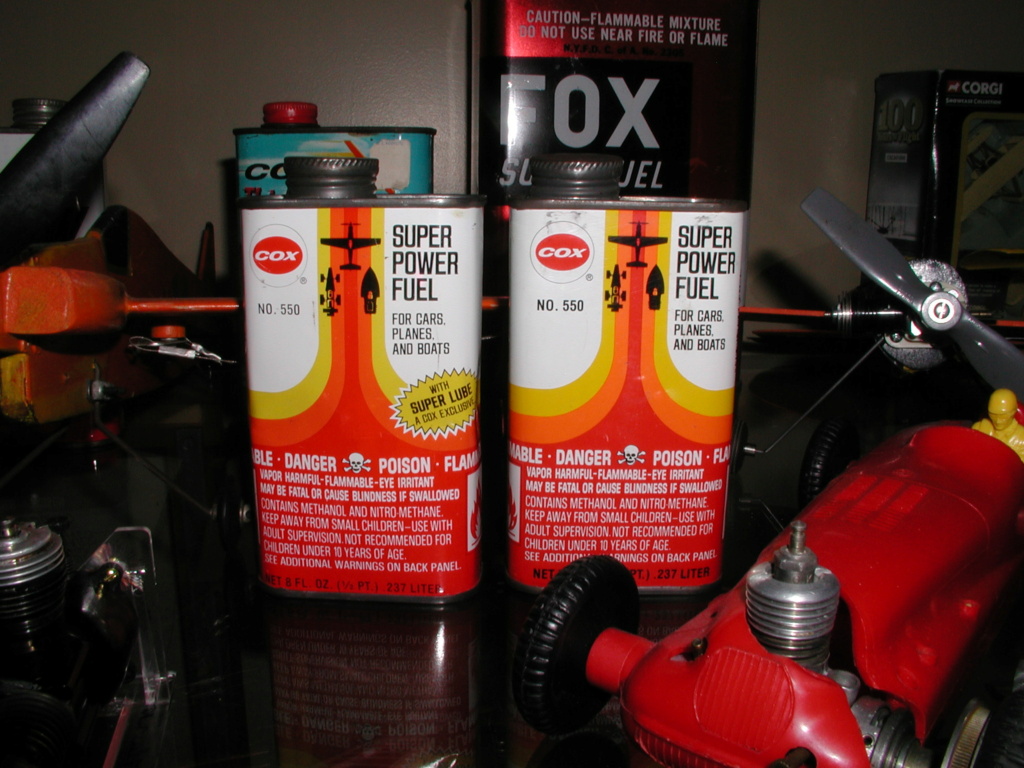 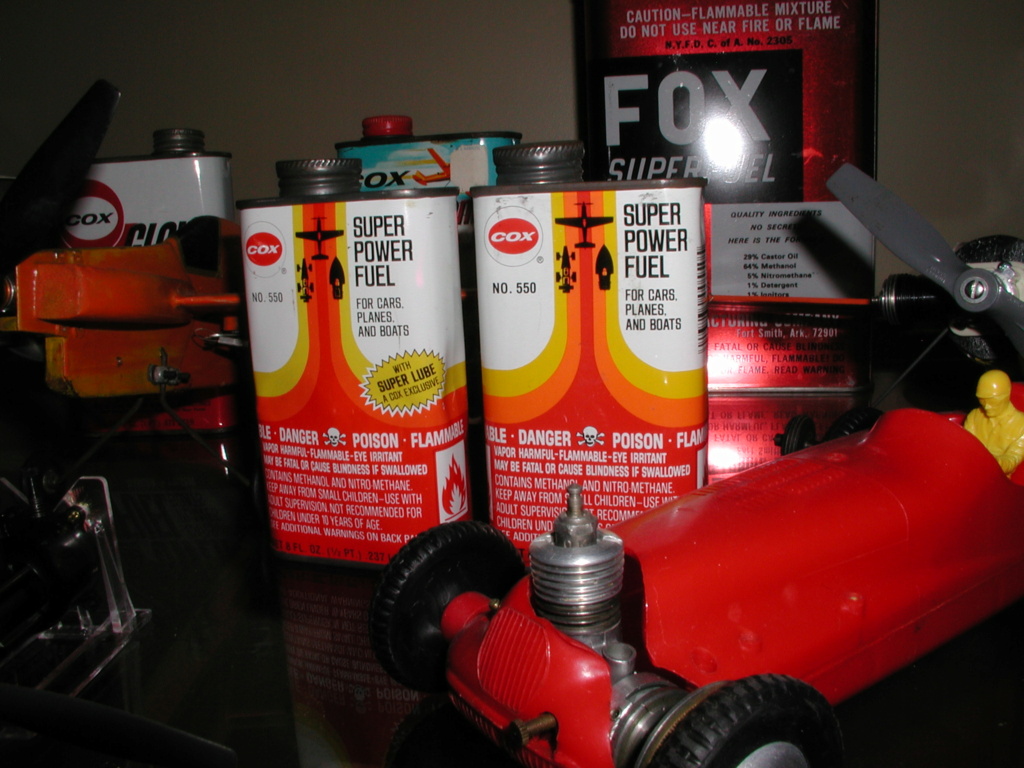 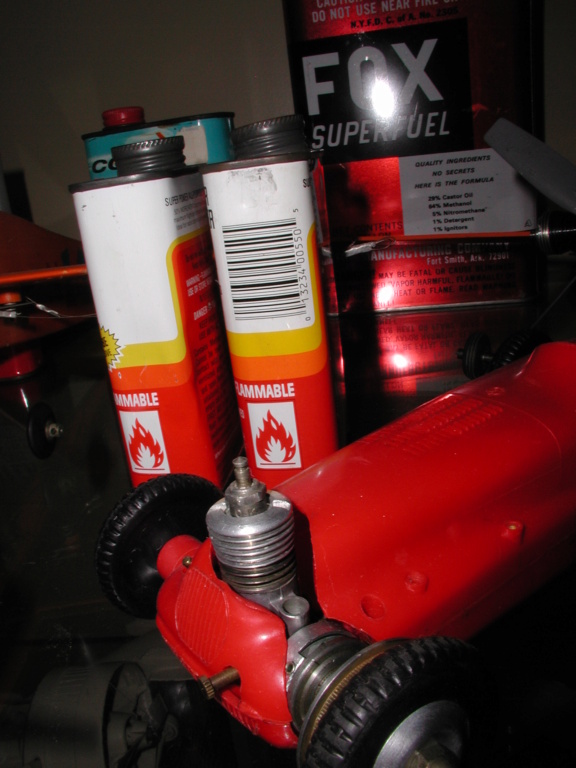 getback wrote:At the end of the second vid. it looked like the engine was overheating ? Smoking it was LOL But that's COOL the old fuel still works even if the engine wasn't at top performance .

I think it did overheat. The piston is pretty discolored around the top. Castor on the head and cylinder is pretty baked on, almost carbonized in the fins of the cylinder. The engine was already covered in old oil when I pulled it from the box, unwrapped it from an oil soaked paper towel and mounted it. Letting it run for probably 8-10 minutes continuously in reverse probably didn't help either.

It's not a pretty engine, the case and tank have a uniform coating of corrosion and at one time someone used a pliers on the driveplate to force it to turn over. Probably something I got at a flea market or in a lot off eBay. I remember it was a strong runner with great compression.

Soaking the cylinder and piston in Hoppe's No. 9 and using a brass bore cleaning brush cleaned most of the varnish out of the cylinder. It should run like a champ once again.
_________________
-Jacob

iamplanecrazy2 wrote:"The engine also insisted on running "backwards", every time it was started."

Maybe it had a clockwise crank in it!

Actually I have had some do that, very irritating!

I wonder why some of them do that. Whether you try to flip it counter-clockwise or clockwise, it wants to run clockwise. Maybe that is how it was broken in. Perhaps it was used on a prop-rod.
_________________
-Jacob

Usually over compression is the culprit , if the hd. gasket is worn (flat) or just has more than normal from the factor , try 2 gaskets ,,, I didn't notice it running that way , i 'll go back and take a look .

Mine run fine on blue and red can fuel that I opened last year from the mid 60's!