If I had to pick "The Most Steampunk-Looking" engines in my collection of castor slingers, it would have to be the weird little Gilberts, marketed by A. C. Gilbert in the early 1960's.

Called "Thunderheads", they were offered in two sizes: .074 ci and .11 ci, and powered a fairly obscure group of Ready-to-Fly plastic control line planes, but could also be purchased separately.

With their spray bar/intake veturi on a long cast aluminum tube protruding from the back of their cylinders, and a set of "mufflers" that would be right at home on a science fiction spaceship from the 1930's, they've got a strange appeal.

When mounted upright, the high spray bar location just loves to flood the old motor, but I was able to get them running with a little extra effort, and flew the Lazy Bee with an .074 and .11 on the Board of Engines. 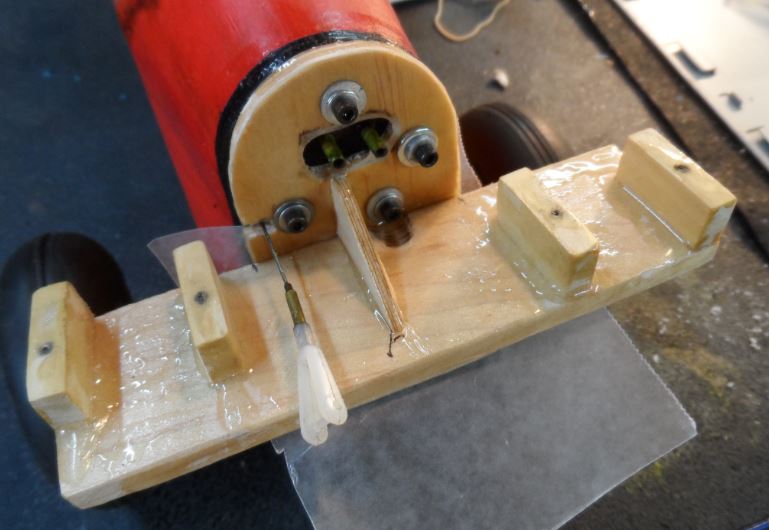 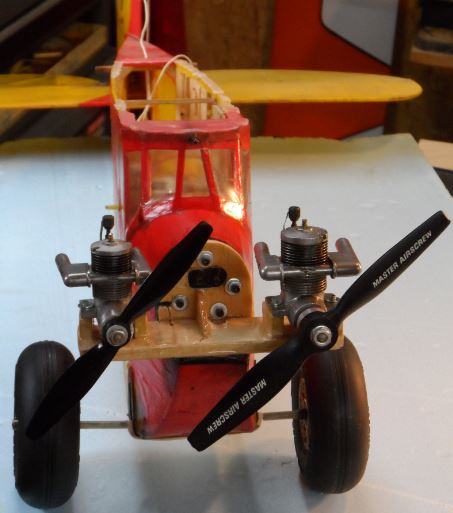 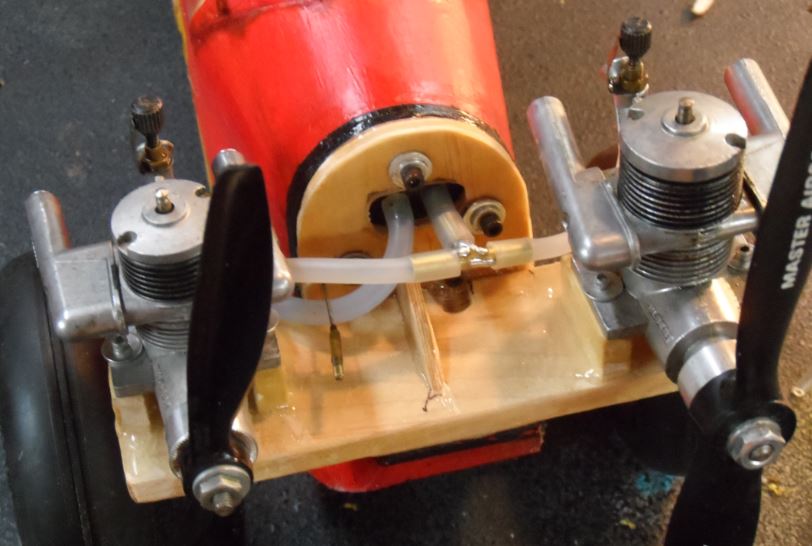 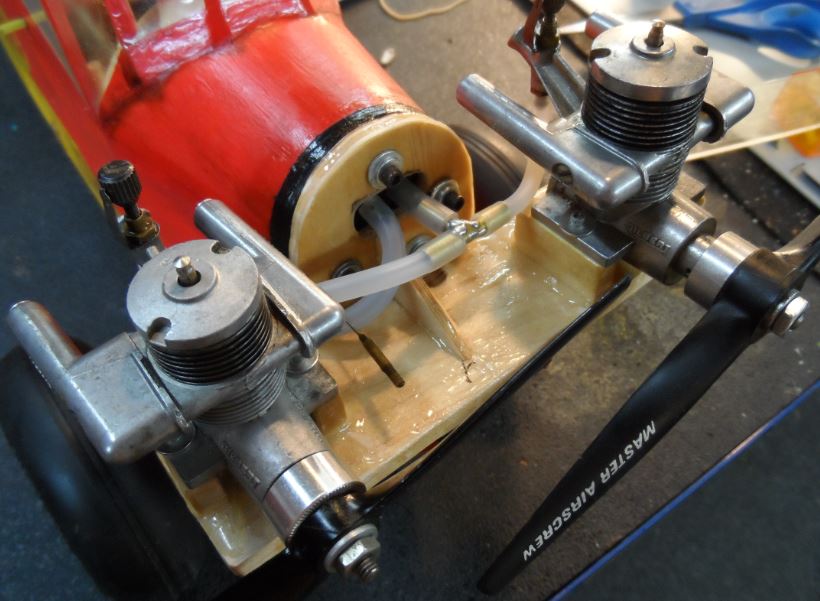 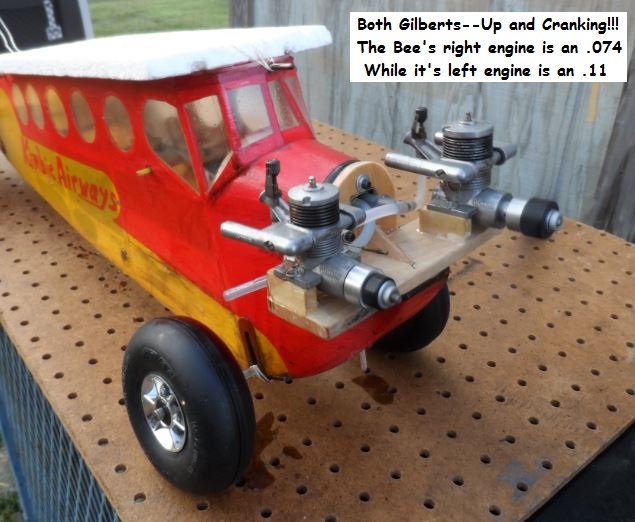 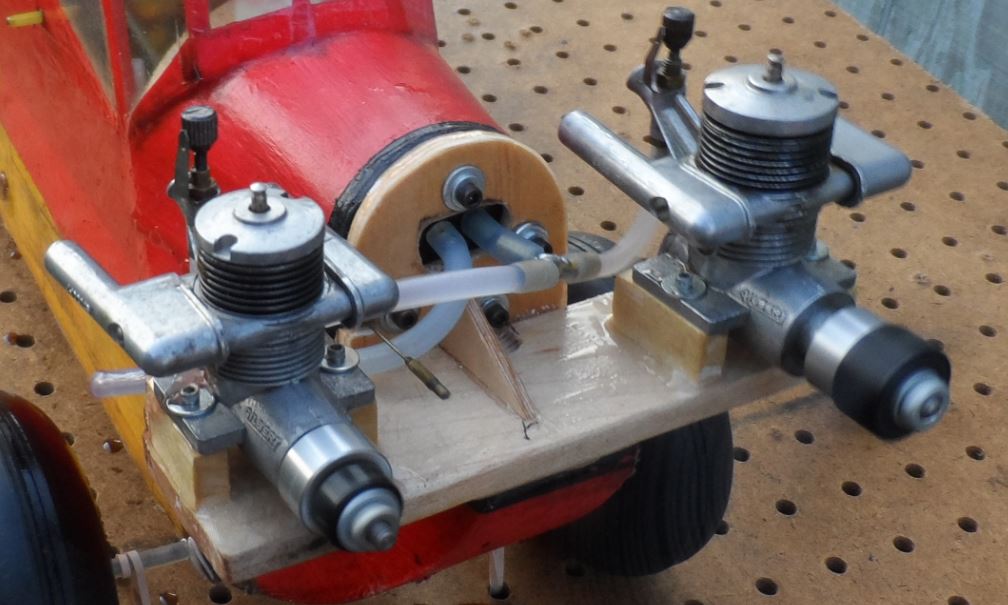 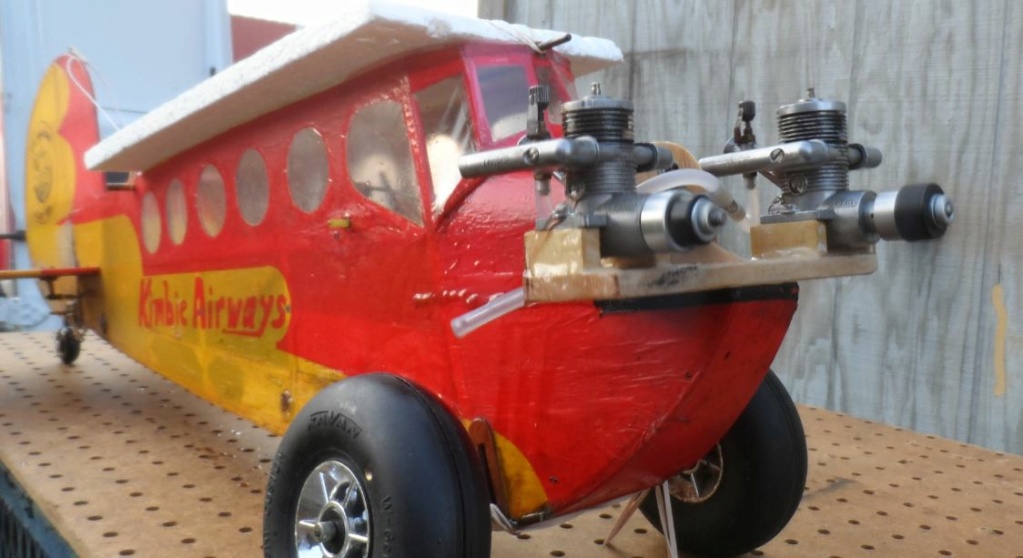 I remember that flight. Admire you for even attempting it, shaming me for not even starting mine.

I was waiting to see what would happen when one engine quit first.

Seems in the video you first had them both plumbed separately, then went to a single feed system/split ensuring they would fuel out together or very nearly together.

rsv1cox wrote:I remember that flight.  Admire you for even attempting it, shaming me for not even starting mine.

I was waiting to see what would happen when one engine quit first.

Seems in the video you first had them both plumbed separately, then went to a single feed system/split ensuring they would fuel out together or very nearly together.

I flew the Bee several times with the Gilberts and, of course, the old plane flew better without packing the camera gear along.

I'd considered making individual tanks for the engines, but thought I'd try running them off the Bee's tank with a splitter, and it worked pretty well.  I had already decided not to push keeping the plane in air on one engine, and figured to put it in the pasture if one gave out at low altitude.

The enormous rudder had no problem controlling the Bee on one engine, but the drag really slowed it down.  After a couple low passes, I just took it up high 'till both engines ran out their fuel.

Hey Kim, my eye for detail just noticed something.  I see you had the presence of mind to reverse the exhausts on the LH engine (the 11) to help direct castor from the fuselage.  Not sure how much difference it made 'cos there's still an awful lot of castor slinging around.

I love the old Gilberts.

Now that's a rig if I ever saw one. Starting could have been a slice and dice if not careful.

Similar topics
» The Old Q-Tee Flys with some Older Castor Slingers
» So I have a Gilbert Thunderhead and a Step Daughter who wants to fly
» Lazy Bee with Twin Gilbert Engines
» Castor Oil for COX Engines: Fact or Myth?
» Steampunk................