Tank Cleaning and an Old Rant from my Youth

Tank Cleaning and an Old Rant from my Youth

had some really inconsistent runs on the Saturday morning. Not bad, but the engines were hunting a lot and not as constant smooth as I would like. Had my 89 year old dad out watching and he said to me, "when did you last clean your tanks?" Well, I dont I told him! Lol. He just shook his head and laughed and said some things never change.

When I was young and racing two stroke Yamaha TZ Grand Prix bikes, my dad tuned, built, and looked after my engines. To the extent that I was sitting on the front row of a 50 bike grid waiting for the warmup lap flag, and looked at my pit board and it was saying "STAY ON GRID. DONT DO WARMUP. So when the warmup flag dropped I sat there with an arm in the air on the front row whilst TZ GP bikes went past me inches away at full throttle with their front wheels up by my head as is the want of 1970s/1980s two stroke GP bikes. The next thing my dad is out on the track telling me to get off my bike and hold it, and is changing the main jets and power jets on my carbys, and I said to him, "What the (goodness Lol) is bloody going on!" Anyway he got all the jets changed just as the grid was forming again and helped me restart my engine. A very strong cold front was unexpectedly sweeping in rapidly across the mountain and he had been watching the barometer and thermometer and knew my engine would definitely blow up with the jetting in it. Once changed and the 15 second flag came up the last thing he said to me was "go like hell, but remember your slicks are cold" - came 3d. couldnt quite close the gap from starting on cold slicks, but if not for dad being such an awesome performance engine tuner and builder it would have been a DNF from a blown engine and a possible very high speed crash if it seized going around the top.

I got home from flying and cleaned all of my tanks, soaked in metho, used a syringe with a filter to force metho through all of the 3 tubes, in and out of all the different combinations, poked lead out wire in them and scratched around and forced clean metho through them all again. The garbage that came out of them!!! I guess running exhaust pressure into them probably cant help and they should be cleaned regularly. Went flying Sunday, the engines ran fantastic and no more hunting, clean solid revs and same needle setting flight after flight. My old man has still got it!!! what an awesome tuning and build engineer

Keep your tanks clean. At least wedges, with exhaust pressure. It makes a big difference over time. Lol.

Tip of the Hat and Raise of the Mug to your DAD! !

The problem with metal tanks starts when they're made. None of the tanks commercially made are properly cleaned. Therefore the flux inside is where the problem starts. Your muffler pressure isn't responsible for the crap inside. The process of soldering is. Perfect tanks seem to be the staple tanks that most use. They're really far from perfect and they're some of the worst offered. The tubing is brass and it splits, the pickup is never soldered internally to the inside of the tank which is the most important part of correctly building a tank. The solder they use is also poor mainly due to cost. Kap Pak was very similar but they offered copper tubes on the later models which is superior to the brass. Regardless if a tank is new, it should have it's back plate removed to insure proper pickup placement and cleanliness.

I have made my own tanks for years.
I purchase the kits from Brodak and solder my own.
If done correctly, you don't need that much flux to solder the tank kits from Brodak.

Here are two of my tanks made for R/C SAM 1/2A Texaco event.
The event limits the fuel to 8cc on the motor run. 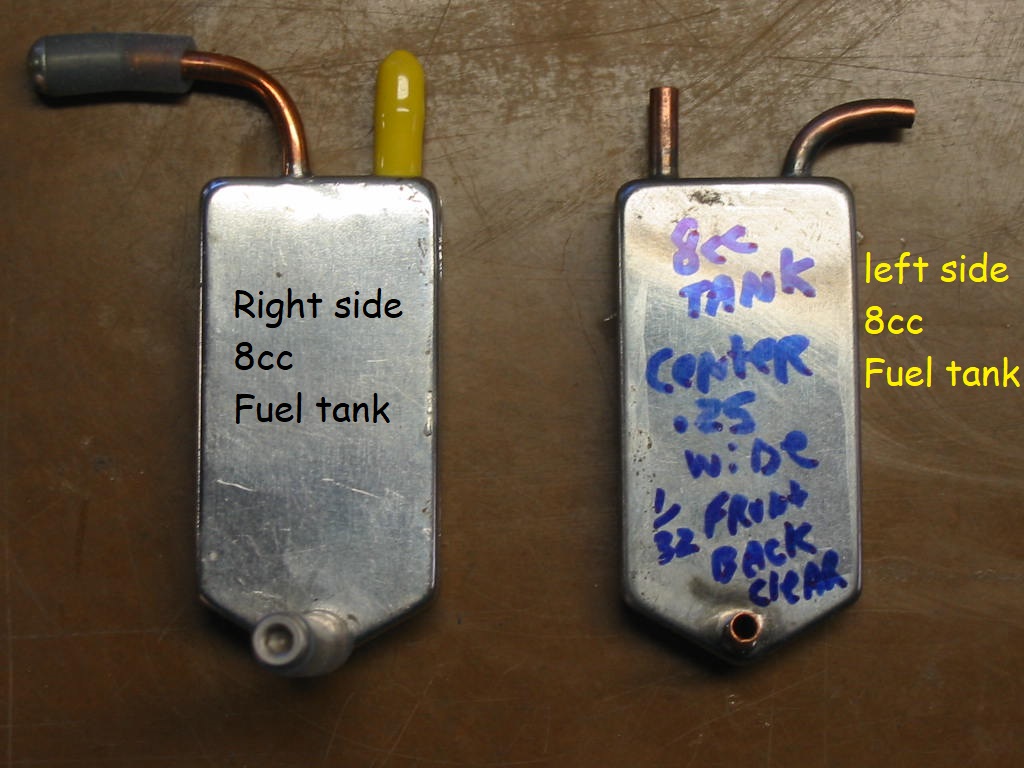 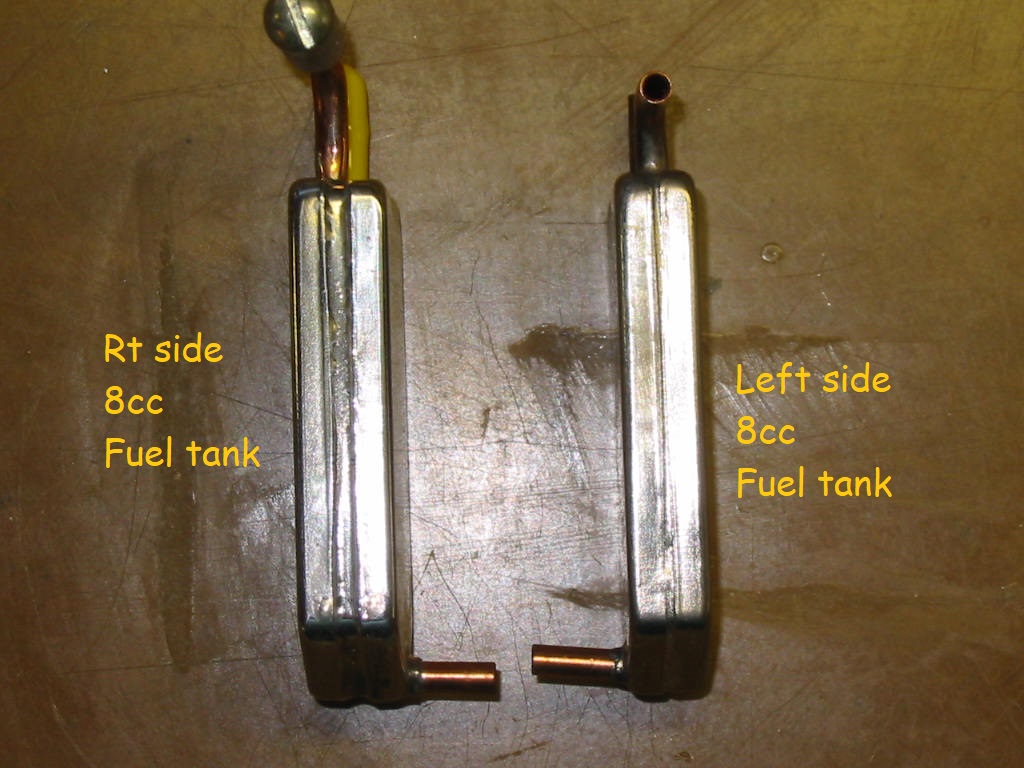 I have made over a dozen fuel tanks for that event to where the contest director automatically
approves contestant's fuel tanks if they are using one of the fuel tanks I built.


About 1/2 the field uses my tanks at the contest.
The last 2 years I gave up making the tanks anymore because of age.

A great story Yabby, I enjoyed it.  Rates a greenie!

Yeh, it was great to get my Dad out watching me and my son fly and he was inspecting and fiddling with everything.

He was/is a genuine awesome TZ GP race engineer and let nothing get in the way of his finding out what he wanted to know. He evidently got caught counting the teeth on the front engine sprocket and rear wheel sprocket of an opponents bike in the pitts, where he had marked one tooth with a piece of chalk and was counting the teeth. Lol.

He wanted to know what gearing they were using on the track.

My mates just couldnt believe his audacity. HaHaHa. There are many stories like that.

He cant do much engineering anymore as he cant feel the ends of his fingers at all due to the extensive rounds of Chemo he has had in the past. Bladder removed then chemo. Large part of Bowell removed then Chemo. 2/3 of liver removed then chemo. all between 82 and 84. big surgeries and tough times for him. But he is 89 now, still clear and out watching me and his grandson fly, and fly for the fun of it, and as he said laughingly when we left, and nobody got hurt and there are no bikes I have to rebuild the night before a race! Lol. Was a great day! :-)

I am very lucky to have shared many adventures with Dad and adventures i otherwise would not have been able to do without his amazing knowledge and grasp of high performance race engineering.

It's great to be able to share memorable experiences with special people. I've tried to do my best to have good relationshiops with my two boys and grandson. As much as my boys have grizzled about being dragged around the countryside with my band and vintage machinery rallies, they now come out with glowing statements about happy memories of those days. I'm trying to include my grandson as much as I can so that he'll have happy memories of Nanna and Grandpa down the track.
Sadly, I lost my dad suddenly when he was 58 (I've just gone 59, so in the clear

)
Lost my big brother at 50 in a flying accident. Lots of regrets about spending too little time with them, but you can't turn back time.
Spend all the time you can with your Dad and your boy Yabby. All the more since you've obviously got your own health issues.
All the best to you and your family.

thanks oldenginerod! thats very kind of you. sorry to hear about you losing you father and brother most definately much too early!

Glad to hear you got past the 58 mark, i can understand that would have been a bit of a worry. My dads father died at 64, 3 months after retiring and I can remember my dad stressing about 64 coming up, and now he is 89!

As the old saying goes, take it one game at a time or one day at time. Its not a race. Lol.

Its great that you spend time with your sons and grandson and have good relationships with them. Often it doesnt become completely evident with grandchildren how much that time meant until years later. My son wanted to go and watch the footy grandfinal with my Dad - his grandfather (and my mom and dad were so happy). I guess thats the time my Mom and Dad put in looking after him, watching him play sport, teaching to kick a footy properly all kinds of things.

Flying half/A again has been great as my dad loves aircraft of all types and engines and stuff and its a great opportunity to take him out with my boy for say two hours and just have pure fun for the sake of it. And its something we all enjoy and can talk about and plan for next time.

Likewise all the best to yourself and family

Seems i didn't spend as much time with my Dad as i wish now since he has passed 4 yrs. come this New years day , But i know the times we flew airplanes were !