Going to love putting that Wildcat together, simple and just my style.

Junk engines - Wen Mark Mk IV with broken case, postage stamp, and a couple of Babe Bees all thin wall the Babe Bees with large head needles. Gold to me.

Babe Bee with strange intake screen retainer. I would like to think factory, but a very clever guy with great hands and eyes I would guess. Still don't know for sure.

Junk engines guy said they all turn over, in fact only one does - sorta. Parts cleaner all, heat, disassemble, reasemble and run. I think I can make it to the woods rather quickly.

Junk engines packed well beyond what they deserved: 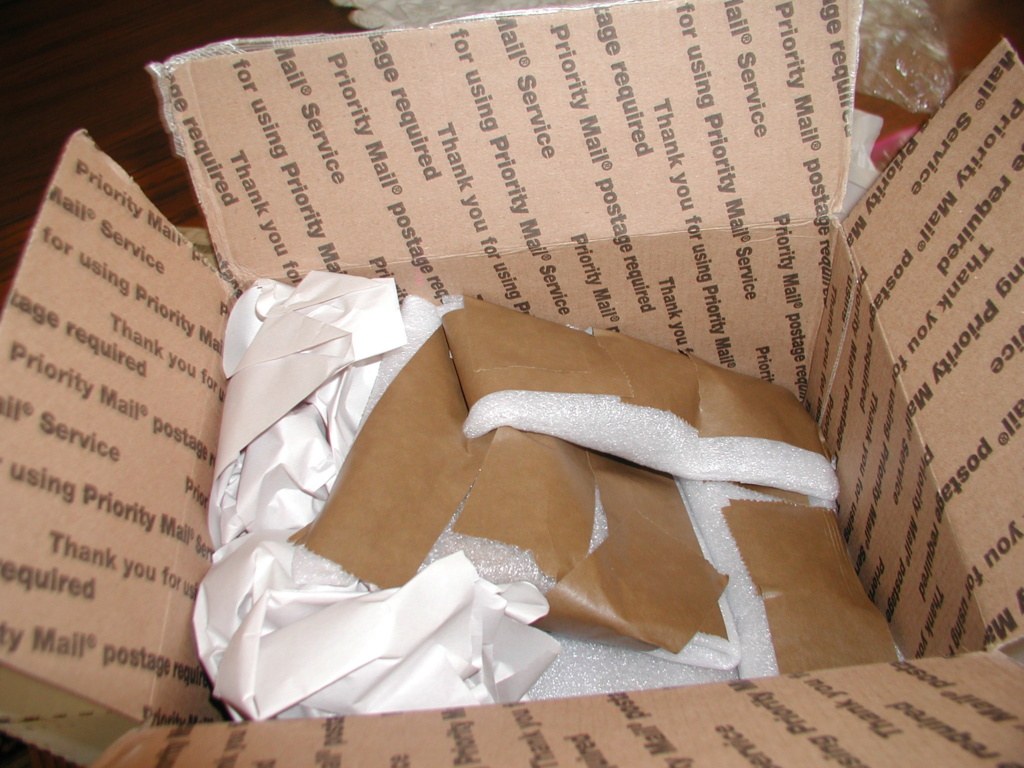 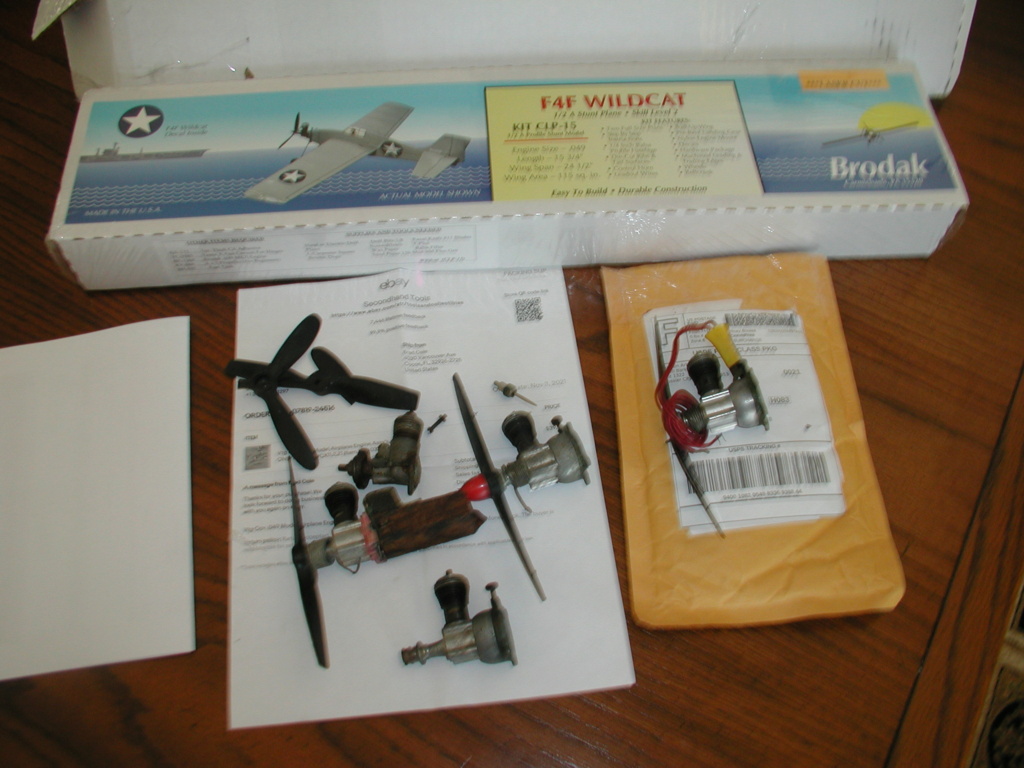 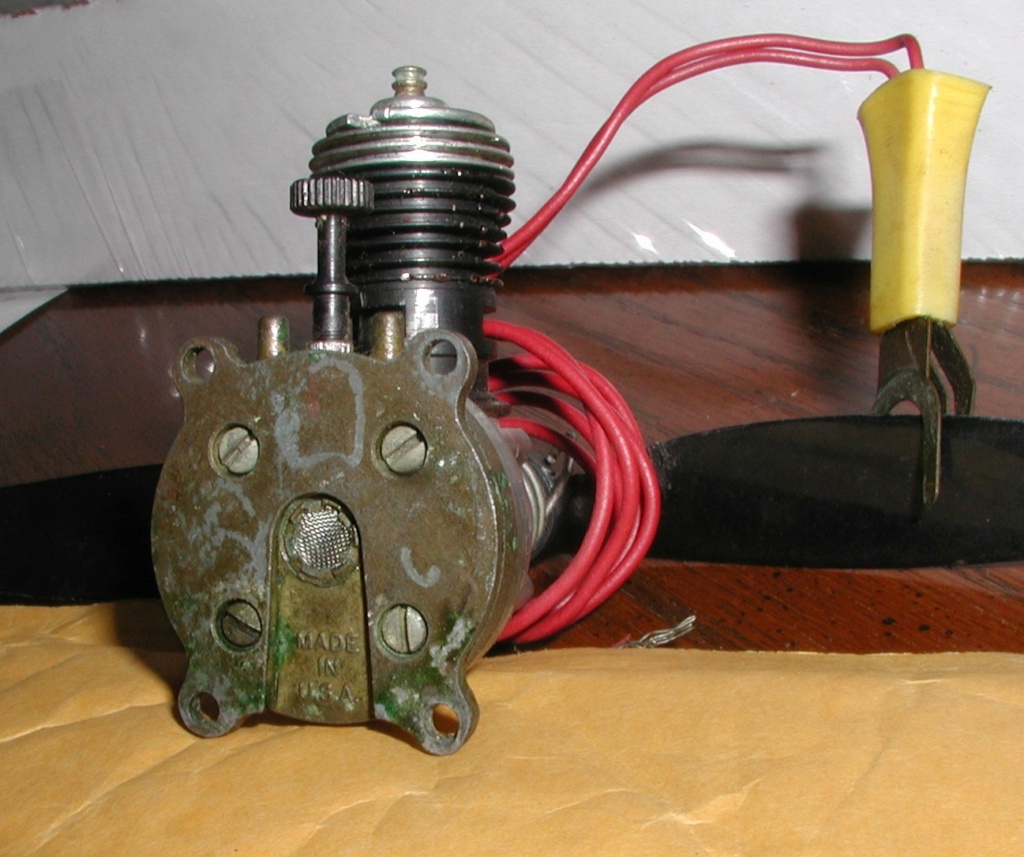 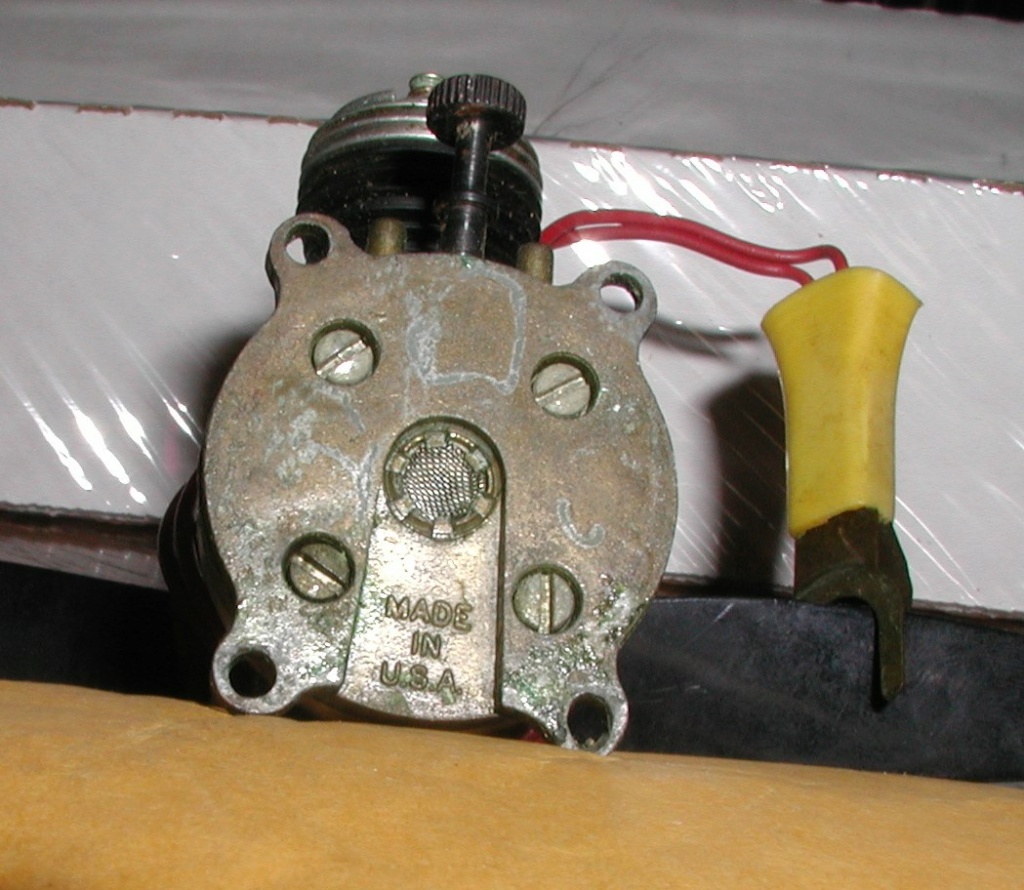 Nice, and glad they arrived there quickly and safely. ALso, looks like a nice airframe for one of them. Definately curious as to how the individual made and installed the screen. Definately looks like a good job and not a hack job.

That kit showed up fast! You will do justice to the kit, just as you have the others. I'd like to see the plans for the wing. It may share the wing with their Mustang...

I have an old Scientific 25" Super Mustang kit. Every time I see Brodak's Mustang in this series, I'm reminded of the Scientific one. The dimensions are the same, the rib count is the same, the pushrod outlet is the same, and I think the decals are the same. The only visible difference is Brodak doesn't include the plastic engine cowl as kitted by Scientific back in the day. Scientific's engine cowls are what drew me and my boys to the Reproduction kits by Dave Cowell/DPC-Models. Any input regarding similarities would be appreciated. I can even email the Scientific plan for your review and input. It can print in Tiled-Mode from Adobe Acrobat or Reader for an overlay/match-up IF the Brodak plan has similar images. I think I have your email address someplace. Care to compare?

Winter time Project Jim. Right now the weather is beautiful but snow on the ground shortly. Share - Yes. When I break into it I will photograph the plans and send them to you.

Bob asked via PM if I had any opinion on the screen staked back plate.

I think, based on the photo that a machine pressed in the screen and retaining staking as uniform as it appears.

fredvon4 wrote:Bob asked via PM if I had any opinion on the screen staked back plate.

I think, based on the photo that a machine pressed in the screen and retaining staking as uniform as it appears.

Thanks Fred, I have been fooling around with this stuff for over fifty years and I have never seen another like it. Gathering opinions from those that share my experience.

I answered your PM Bob.

I am going to go look in my parts pile today and see if I have one. I just don’t recall ever seeing one. Somebody here has the answer, probably a factory worker knows.

Responses from jmendosa and Mudhen.........I think they nailed it.  Good to hear that Mud has seen a couple like it.

The 1st Babe Bees had no screen, and then they added the screen and modified the backplate to accept it by crimping the edges to hold it in place, and later, under Leisure, they eliminated the screen altogether. But what you have is most likely an early attempt to make the the screen removable by slotting the crimp ring to form tabs. This was probably only done for a short period of time, as it would be easy for the tabs to break. The cylinder you have is the one that was the 1st change from the thin wall for a throttle sleeve, and the wider front neck on the case that still has a taper to it. Cox only made these versions for a few years before going to the thicker cylinder and straight cut neck on the case. I do not recall seeing the tabbed screen backplate, but it is definitely a change that Cox made, but was probably only done for a very short period of time. Just like the W shaped glow element, they were only around for a year or two.
Jay

Hi Bob,
I came across that style tank back several years ago while restoring an initial issue Dune Buggy.
That dates the item to early/mid 1969. Since then I found another one on a Golden Bee, (same era.)
It seems the simplest answer is that for a short time used alternate tooling to secure the intake screen.
Engines from the same vintage, (1969-70,) used the newer style stamping. So it lasted only for a short time.
Maybe less than six months.
Mud

I lightly cleaned it this morning.  No boil, no parts cleaner just Remoil and a toothbrush.  Left mostly as found patina and all.Clean engine to start with.  Thanks to all for helping me clear this up. 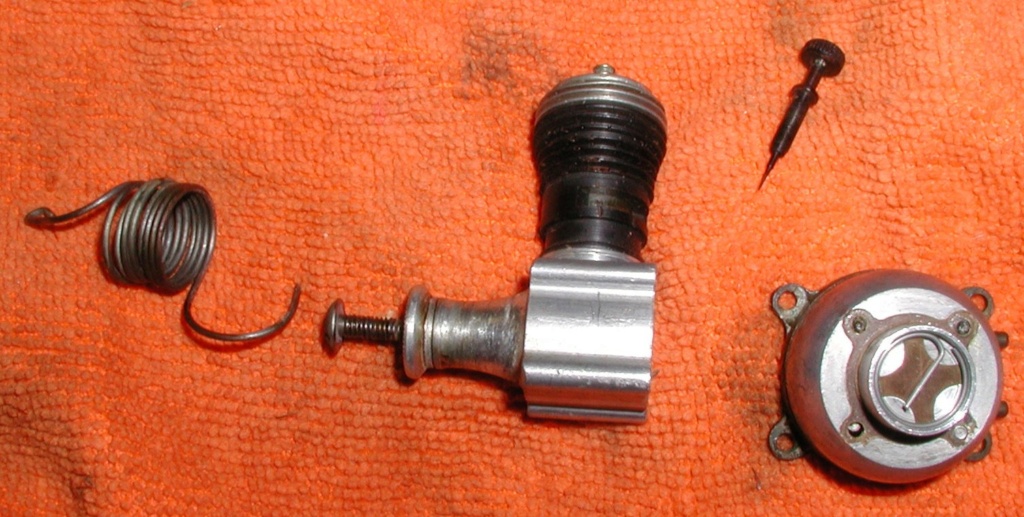 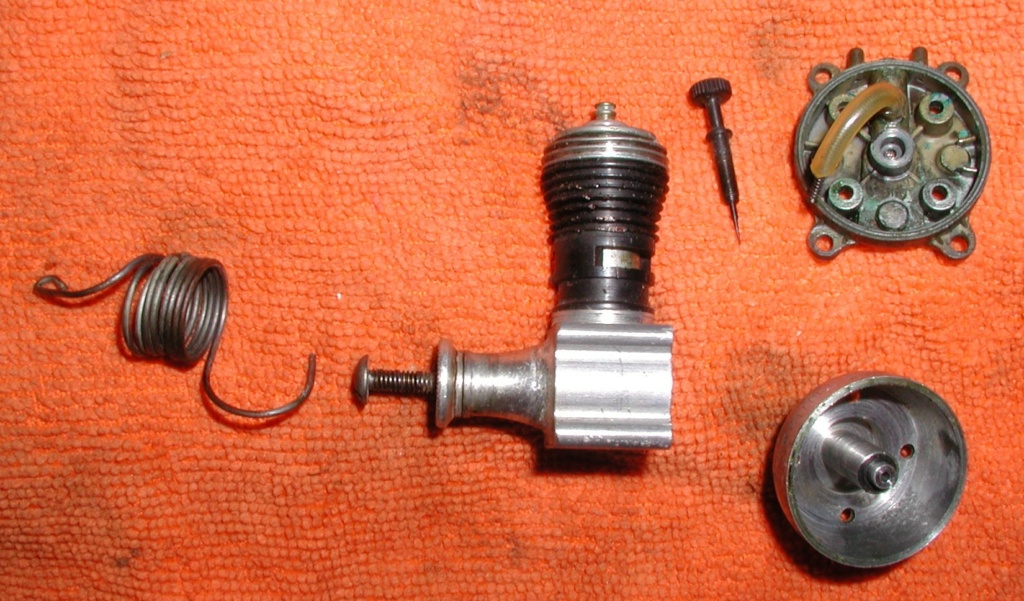 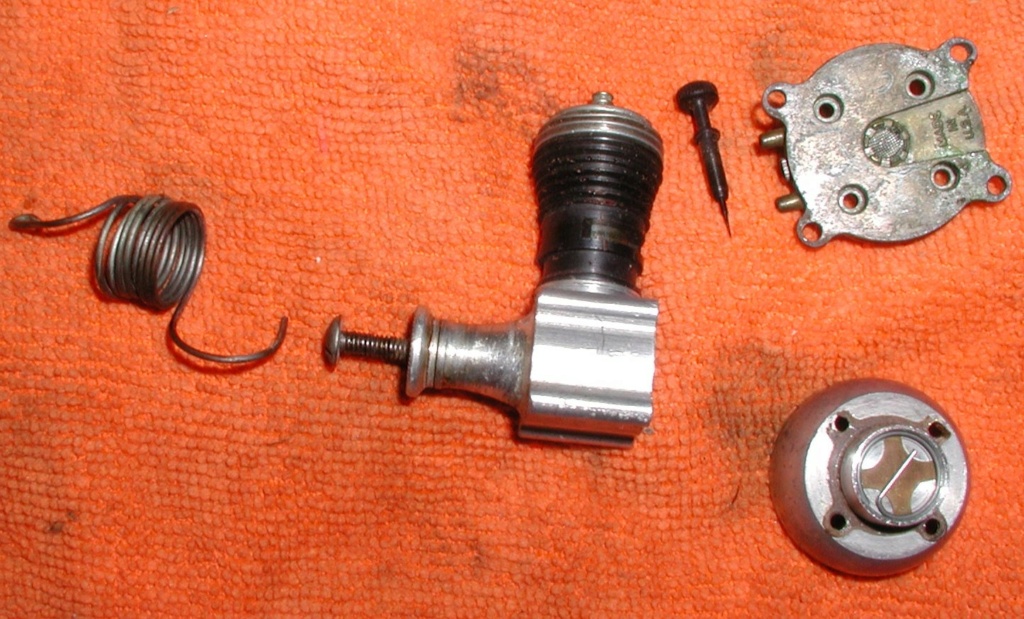 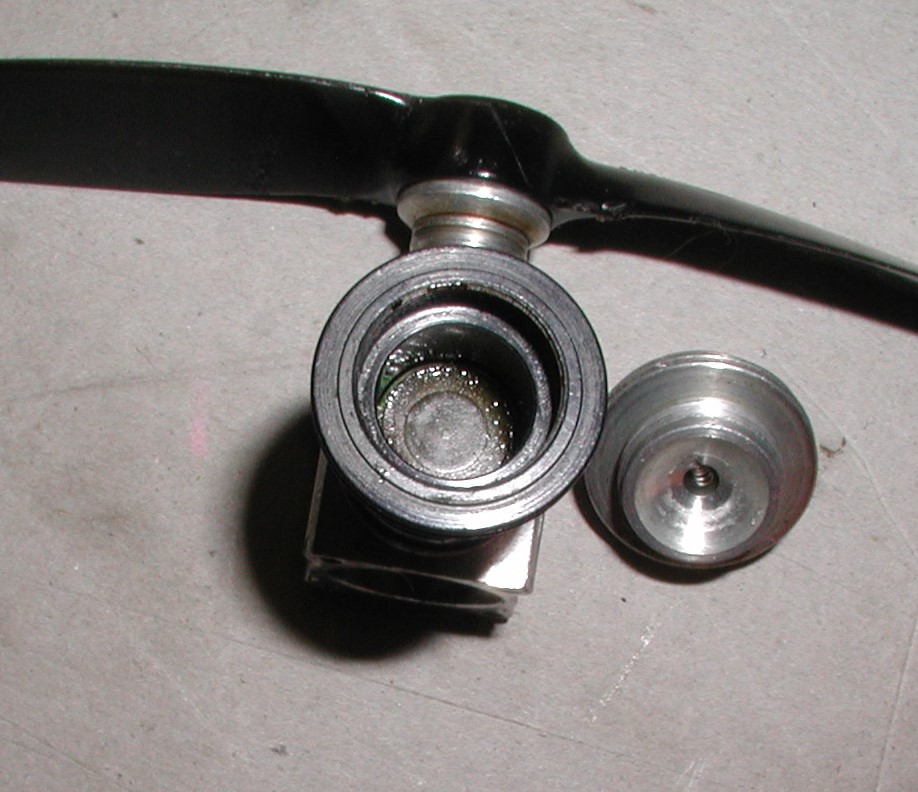 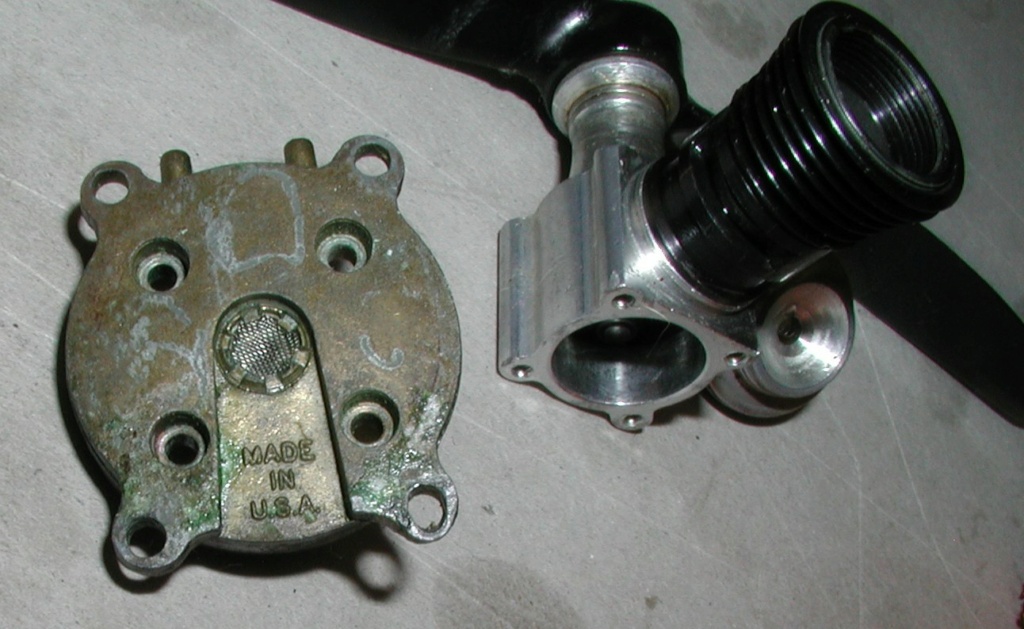 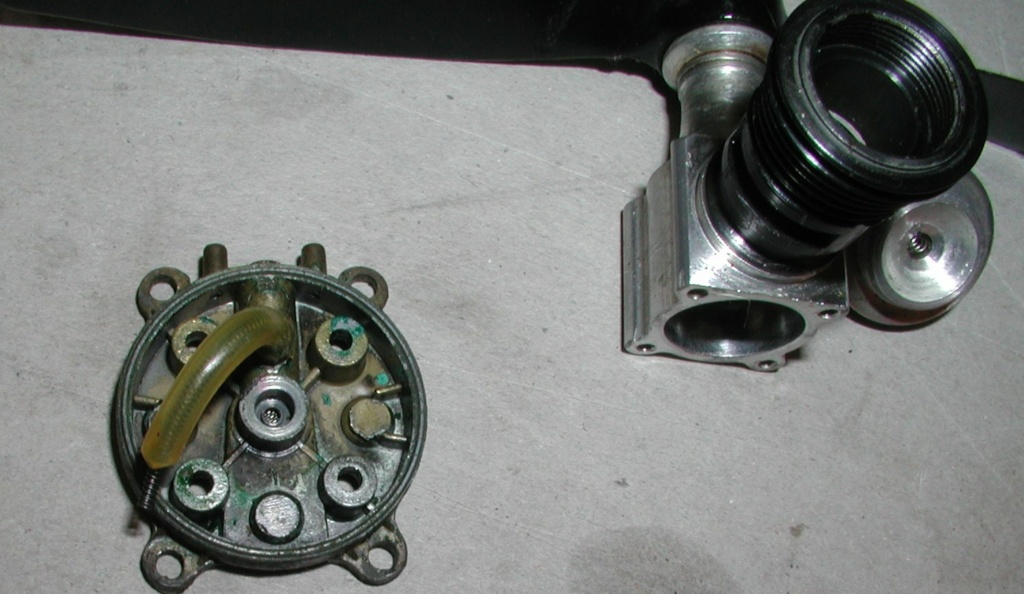 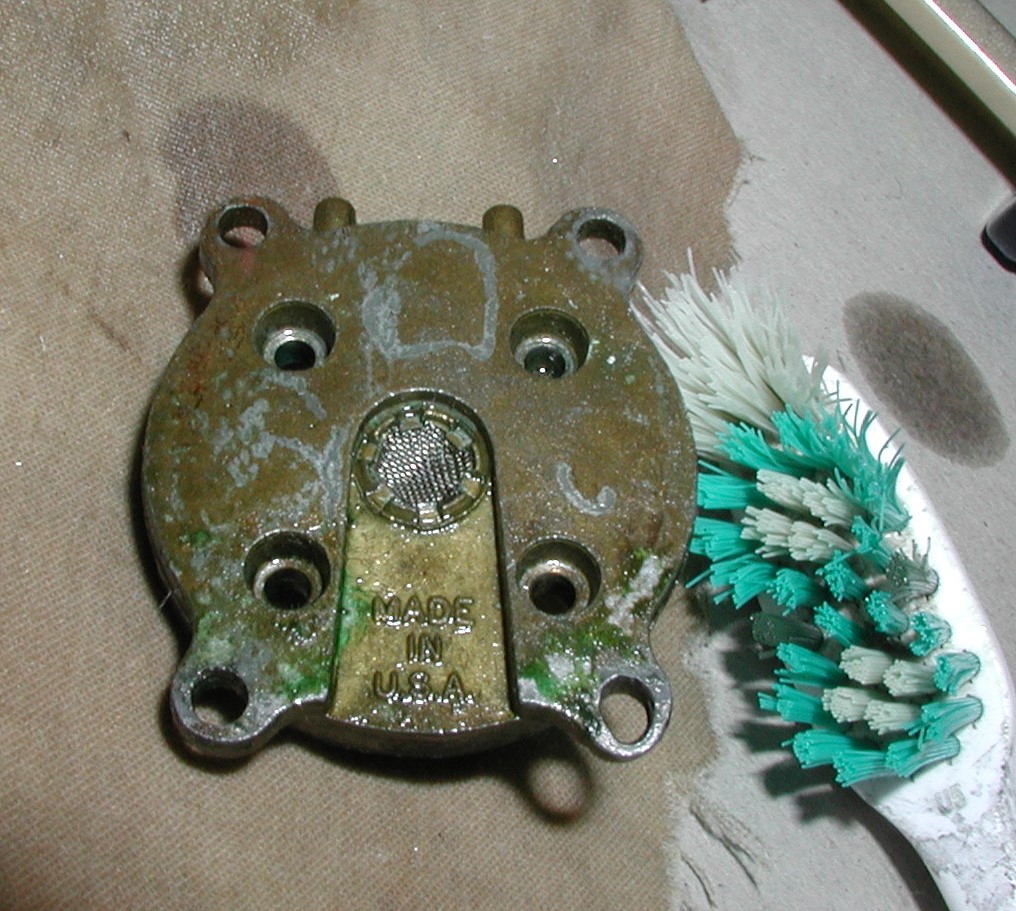 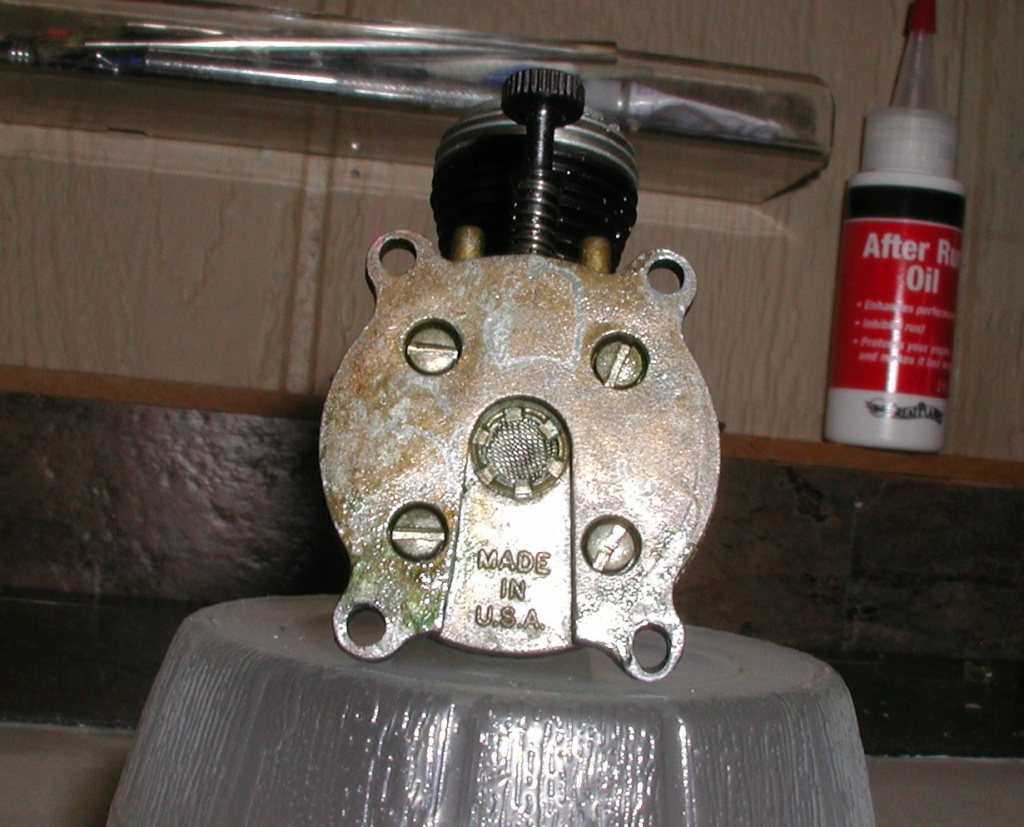 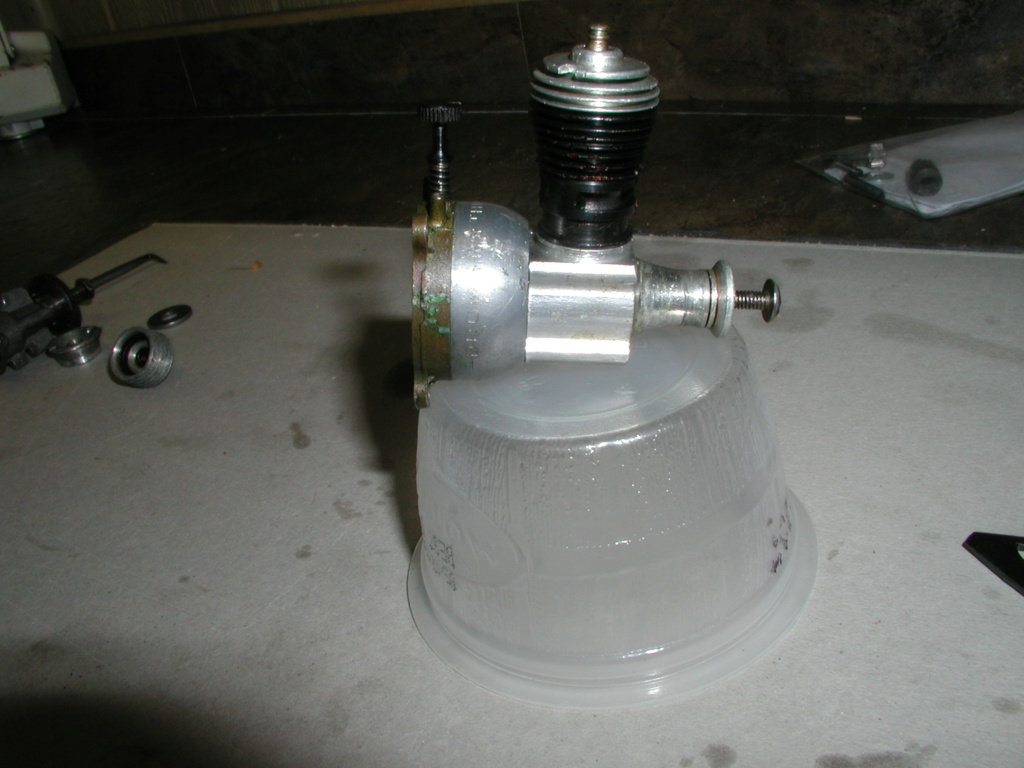 Replaced the missing needle spring and the head gasket was missing altogether, not just melded into the top of the cylinder as is so often the case.  Also finding a new prop starter spring, old one was was bent.

Thanks Chase, I am no longer alone!!

Found a new starter spring to replace the original bent one.  Variations of these. 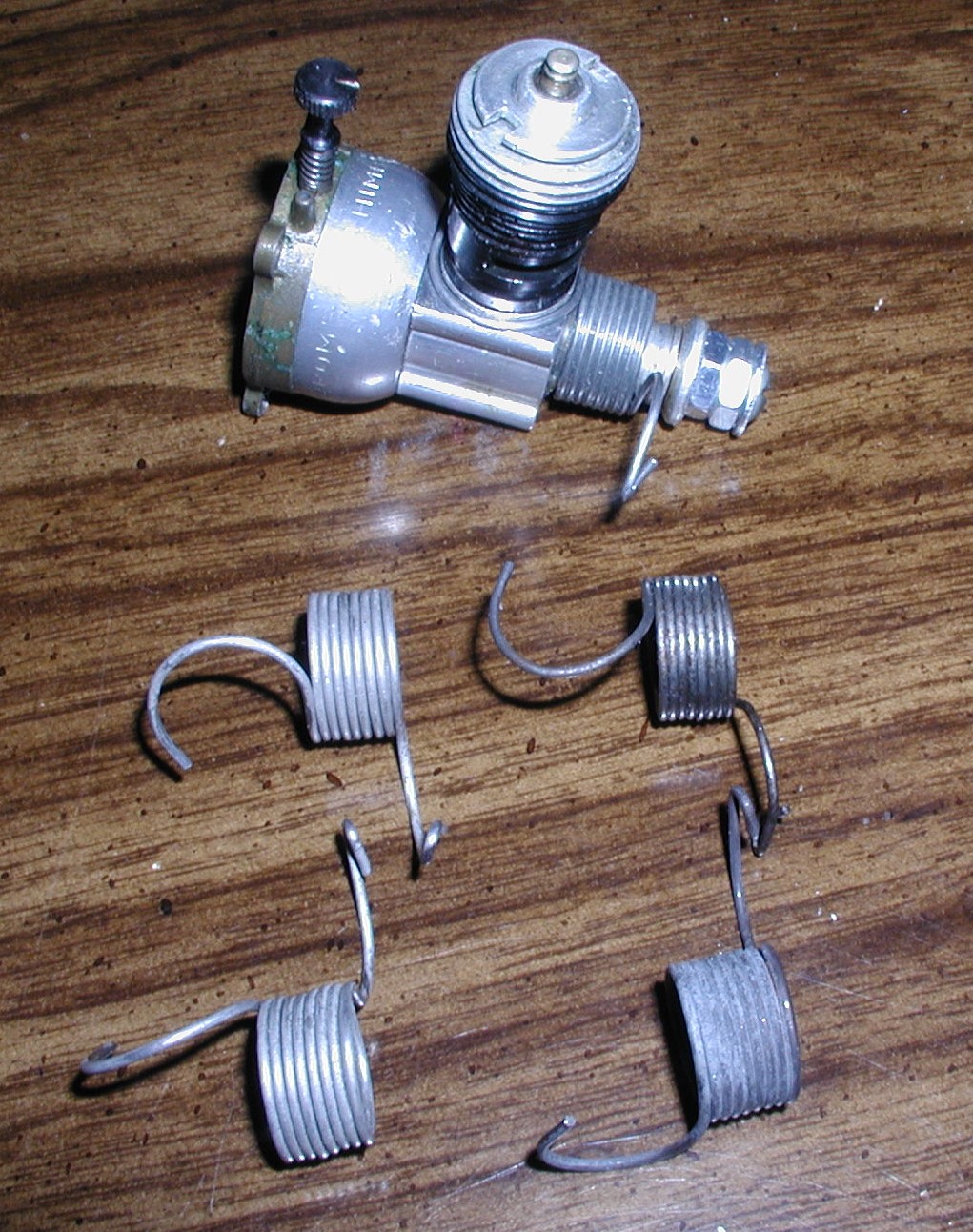 Thanks Chase, I am no longer alone!!

Found a new starter spring to replace the original bent one.  Variations of these.

i just put a throttle sleeve on a golden bee and realized the hex drive plate/auto catch cam will spoil a man whos just looking to cruise around the sky and relax. i can see the advantage(other than less friction) of a no drag drive plate though, less sore fingers, some reason the extra step makes me anyway more careful when winding the prop....but yes sometimes the junk yard box is just as cherished as the ones on the shelf we proudly display