» Cox PeeWee Micro Speeder
by Tobaiies Today at 11:41 am

» Follow The World's Smallest Traveling Engine!
by Oldenginerod Today at 12:00 am

Might be the only one of it's kind the Half Fast .15

Might be the only one of it's kind the Half Fast .15

Last Saturday, the turkey dinner got my creative building juices flowing. The weather was cold and blustery so it was to the basement for a build I've wanted to do for some time. The Half Fast is one of my favorite flying combat wings. I always thought of doing a smaller version of it. I tried scaling things down and after dozens of sheets of paper and running out of printer ink I settled on the TLAR ( That looks about right )plan . So I've had this Norvel .15 AME which I used for .15 combat sitting in the drawer for some time. I used this engine for a long time and I really enjoy it. I built a engine crutch for it and started on the rest. I had this framed up by Sunday evening and started doping Monday night. Doping in cold temps was not fun. I managed to get enough coats on and came home last night and put red silk on it. I never did silk on a model before. Essentially ran it under the faucet and laid it onto the model. My son and I pulled out all the wrinkles and quickly brushed thinner through it to adhere it. I haven't put any dope on the model yet but here it is. 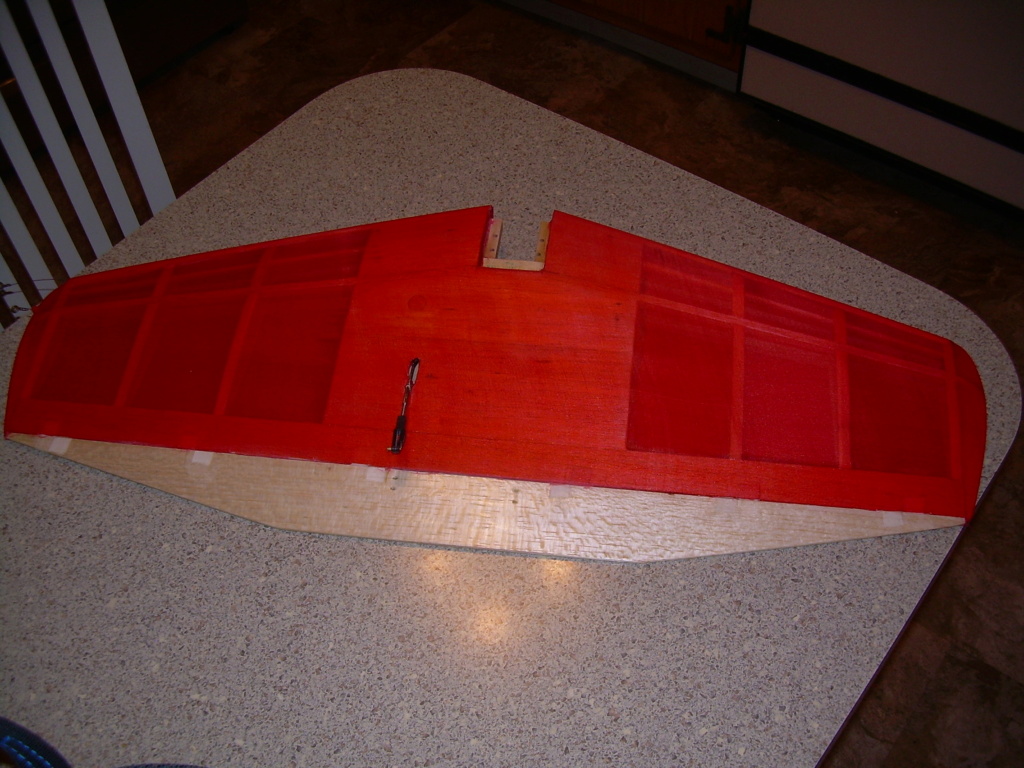 The rudder is still drying as it will be covered in yellow silk. The elevator will be painted yellow and probably some kind of stripe in the field. I will have a bladder tube mounted up on the sheeting directly behind the engine. This should be a blast!!!!

can't wait to see the video

Defiantly A Combat Wing !! Was this a kit you had ?

Eric, this wasn't a kit, I had plans for the Half Fast which uses a .35. I tried downsizing the plans which proved somewhat satisfactory. I then was able to use a root rib which looked approximately the correct size and a tip rib. I cut them out of the paper and traced them onto the balsa. I then stacked ribs in between the two and sanded everything down. The leading edge is tapered so I used a 3/4x 3/4 block and planed it down when everything was glued together. The spars are useless in these planes and I put them in regardless. One usually breaks them as they're too fragile. They were only in the wing to hold up the covering due to the wide rib spans. However, due to a miscalculation on my behalf, I had to sheet the trailing edge top and bottom with a additional 1/16". This required cap strips then on top of the ribs. Nonetheless, this thing is like a battleship.

The cold is really presenting issues with the dope. I have to thin it so much that it causes pin holes and cratering. I tried retarder which worked excellent but it keeps the open time so long on the top coat that it tends to eat away the base coat. Doping for attachment coats isn't a issue, it's when your trying to build up coats for a finish. I can't dope indoors here and I wouldn't want to. I've had that silk for probably close to 40 years. My dad had it in a candy box all folded up. I figured someday I need to try this. I like it but I would do somethings different if I did it again. Cutting it is a major pain in the @#$. Sharp scissors is a must which I don't have but my dad told me to cut some aluminum foil with the scissors and this will sharpen them and it did.

Silk falls over the framework unlike silkspan. While this is great if dope gets on it and it touches something you don't want touched it's glued there forever. It's difficult to rip off and it becomes problematic when overlapping one side to the other. Luckily I had some Duco cement here. My dad told me to mix a little Duco with dope thinner and brush that on or use your finger . That worked exceptionally well as it instantly sticks down silk that prior didn't want to stick to the framework. Some guys pin it but this method was instant. This was around the wingtips.

If using Silk again in future I recommend HIGHLY a Large rolling cutter from Joann's, Michael's, Hobby lobby, or amazon
Cheap...wicked sharp and did I mention cheap...grin screw the scissors as too frustrating

Wetting raw silk....hand wash all silk unless you know for sure zero sizing (rare to find) in luke warn water with one and only one drop of dawn, cold rinse twice and lay sheet of silt on a bathe towel clear washed ( no cool smelly or dryer sheets) and lightly pat down to remove excess water...silk lays and is taughtened so much easier if only slightly damp...I have wife help me pre stretch it on the towel before we lift the piece into place. I start at LE with dope down, wait about 30 seconds then move to TE and slightly tug as I dope then root span and finally conforming to out board wing tip. I know you know about preval disposable sprayers, I buy this by the 12 pack at automotive out lets on line Like Eastwood...in bulk about 6 7 bucks each....

Fred,
Is that the kind of cutter I need for fiberglass?

Not sure of blade sharpness longevity for heavy weights but for the uber light stuff ...and my CF veil or cloth
I use it is superior to scissors or scalpel. wife has the blade sharpener and dozens of new and used blades. very common in quilting to cut cloth over 300 feet of cuts in a day. the smaller diameters follow a French curve type template perfectly

I'm not sure the size of your basement or if you have a small room in it, but woudn't a small space heater work to take the chill off?

This oil filled heater works well in my 12 X 20' room off the basement. 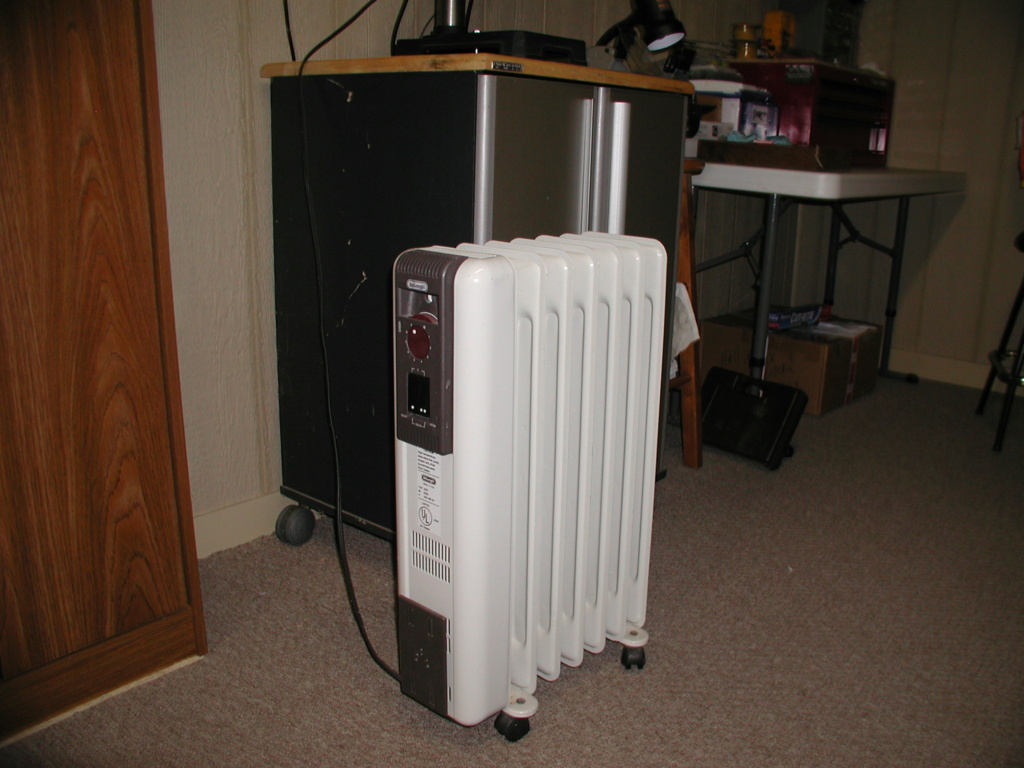 they work great in all 5 shops to keep temps above 45 all winter over night to keep Renie and my glues, paints n stuff from freezing

I also buy 4 extras to drop off at fire department call for toys....cant play if your cold

fredvon4 wrote:I buy 2 of those a year when Walmart takes a pallet on a center isle and price drops to $59 from 79

they work great in all 5 shops  to keep temps above 45 all winter over night to keep Renie and my glues, paints n stuff from freezing

I also buy 4 extras to drop off at fire department call for toys....cant play if your cold

What a great idea Fred, your acts of charity earn my admiration and respect.

I have one of those oil-filled electric radiator/heaters. On the lowest of three settings, it heats a small room adequately.. under freezing conditions.

Charles Winchester IN A m.a.s.h. EPISODE WAS VERY ANGRY WHEN THE PRIEST SOLD his GIFT OF EXPENSIVE CHOCOLATS (damned caps lock sorry not shouting)

The Orphanage Priest explained that his generous gift bought enough food for a month. Poignantly Charles choked up and apologizes saying something like...I am sorry Father it is inappropriate for starving children to only have a little candy

fredvon4 wrote:Charles Winchester IN  A m.a.s.h. EPISODE WAS VERY ANGRY WHEN THE PRIEST SOLD his GIFT OF EXPENSIVE CHOCOLATS  (damned caps lock sorry not shouting)

The Orphanage Priest explained that his generous gift bought enough food for a month. Poignantly Charles choked up and apologizes saying something like...I am sorry Father it is inappropriate for starving children to only have a little candy

Sorry Fred, I should have used kindness instead of charity. Your gifts spread around this forum are more acts of kindness than charity.

BTW, we share the challange of the keyboard. My random finger movements require a lot of corrections before I post, even at that I make mistakes.

To my dear (to me) friend Ken Cook--I apologize for hijacking a thread of yours. Please keep with posting about the Micro fast TLAR bird

Bob, the cold I was referring to was due to working outside. I do have a garage but it's not heated. I also don't like doping inside it because there's no ventilation. I would like to spray and I have done so but it's a pain in the rear to drag all that stuff out for such a small project. Most of my projects have been brushed lately. Doping in this cold weather does offer some benefits as there's no humidity. However, the cold makes the dope drag when brushing. To combat this, you really need to thin the dope and this is problematic when trying to offer additional coats.

Ken knowing your skills and tenacity I know you of all builders here on CEF will end up with a screamer you and Shawn (Sean?) will wring out and have a blast with

Fred, today I made it to the field and many of us had one heck of a day. I have a Consolidated WOW that was given to me. It was built probably 50 years ago and it was a mess. I had to break it over my knee to repair it and make it straight. I then repaired all the internals and I flew it today. Power was Fox .35X which now has a Brian Gardner .36X piston liner assembly. It looks very much like the Half Fast. I was running the engine rich due to it being new but at the end of the flight it was leaning up pretty good. So I went up for one last flight and I decided to up the nitro. I had some 60% nitro fuel and I put in 1 oz of 60% . I primed it and when I flipped it, it backfired and caught fire. It burnt my glove and damaged the leading edge pretty badly. It was instantaneous.

We also did some free flight and I had the Dakota flying extremely well but it caught fire as well. I don't know what the heck was going on but it burnt the underside pretty good but it was still flyable. I had the Dakota going out of sight. My buddy Frank got some good video so I will post it when I receive it.

Ken I have two short kits on RCG for sale Bill Netzeband Equalizer and Jerkline special that Walt Unland of Built right laser cut for me..all wool no hardware

Fred, I just read your post. A gracious offer and I wouldn't accept without paying. I went to RC groups and I see Dennis responded. I actually know Dennis I just don't see him all that much.

Similar topics
» It was a Cox kind of day
» ULTIMATE RC COX GAS CAR ONE OF A KIND!
» what kind of engines are these
» Fred Von Gortler update.
» Kind of slow today...