A few steps up from a MG.  Owned a new one back in 1985.  I may be absent here for a few months unless someone wants me to start an off-topic build blog. 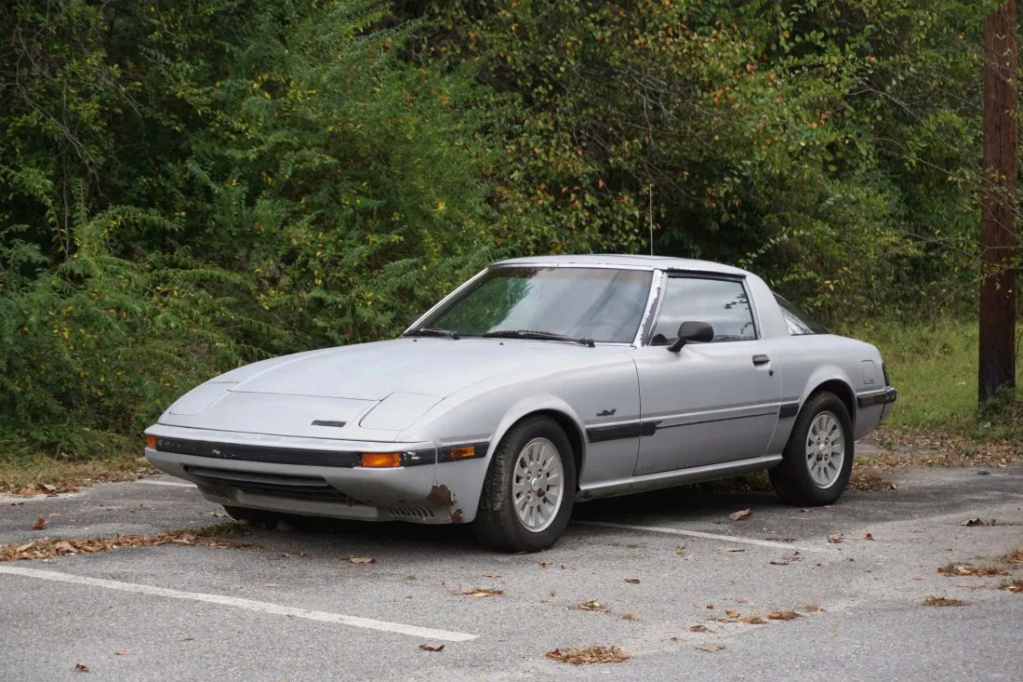 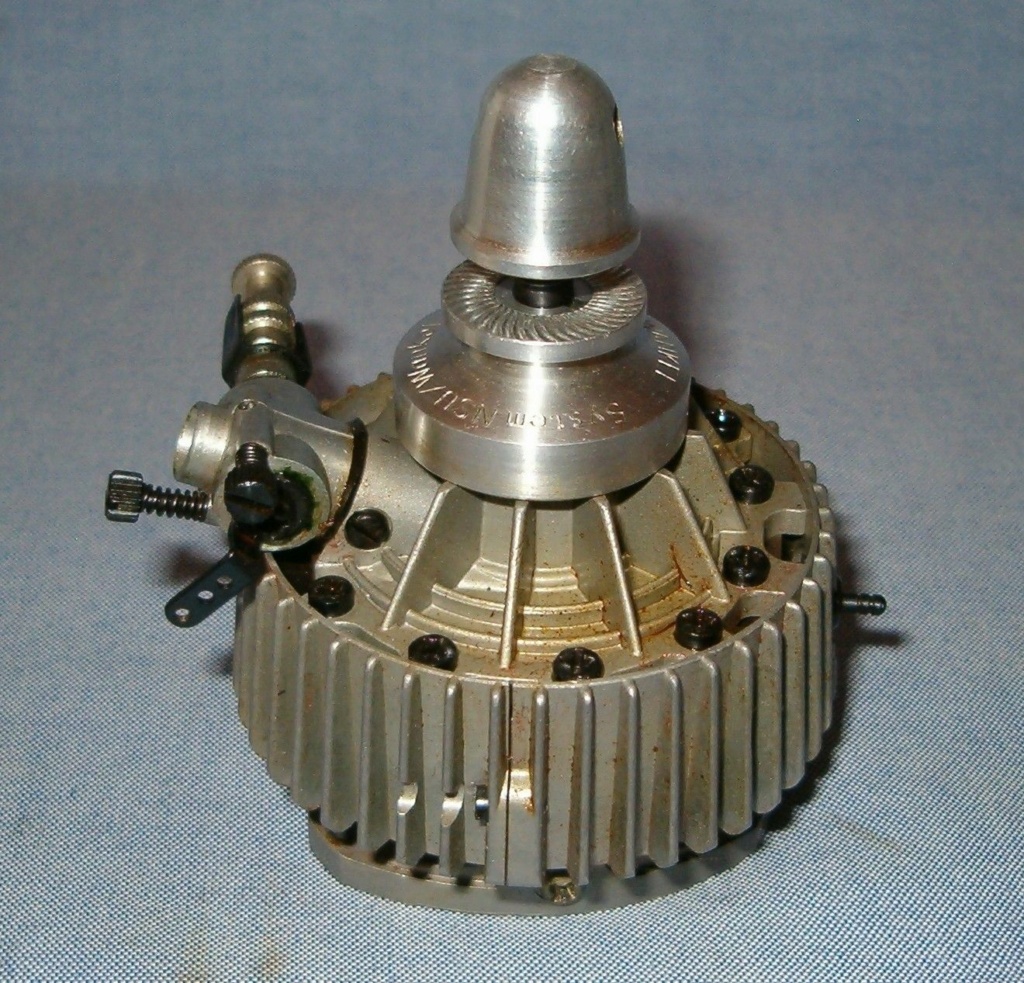 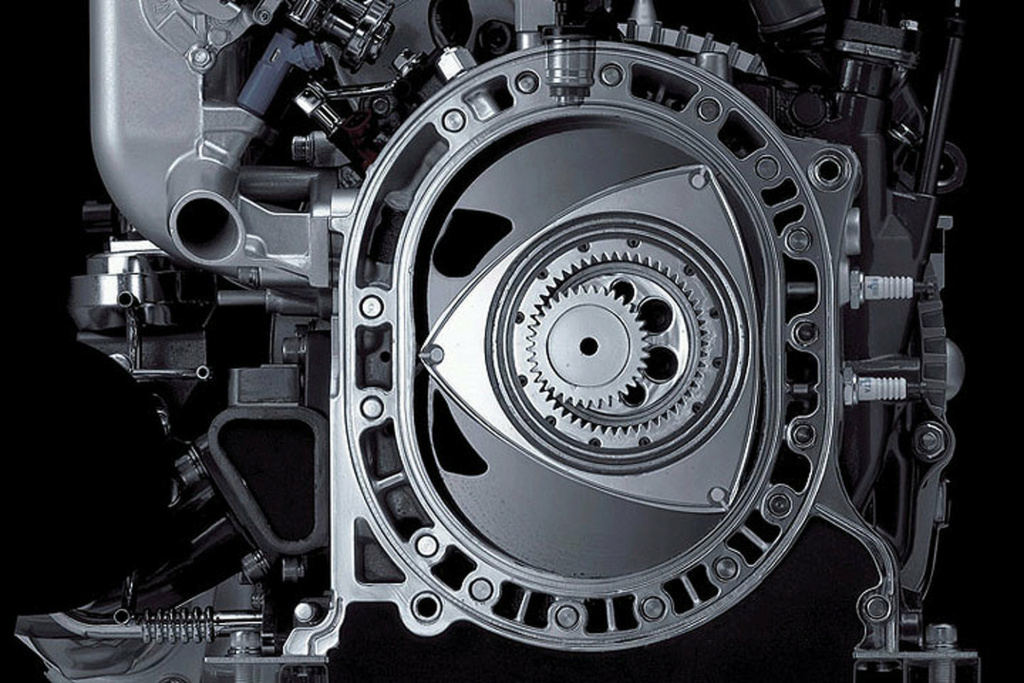 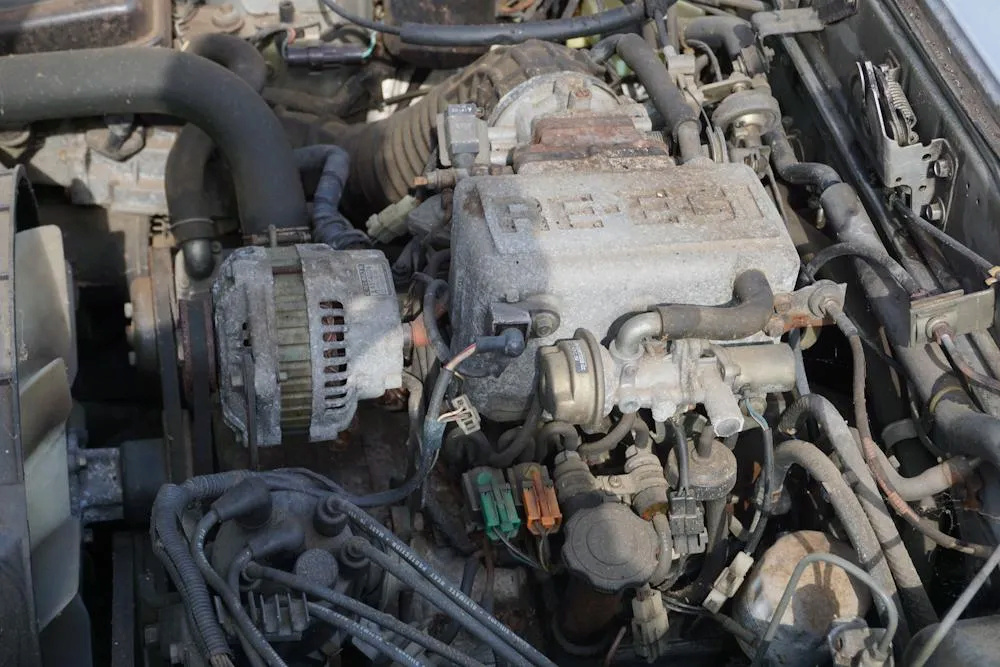 But, I still have this Wen Mac Automite to finish up. 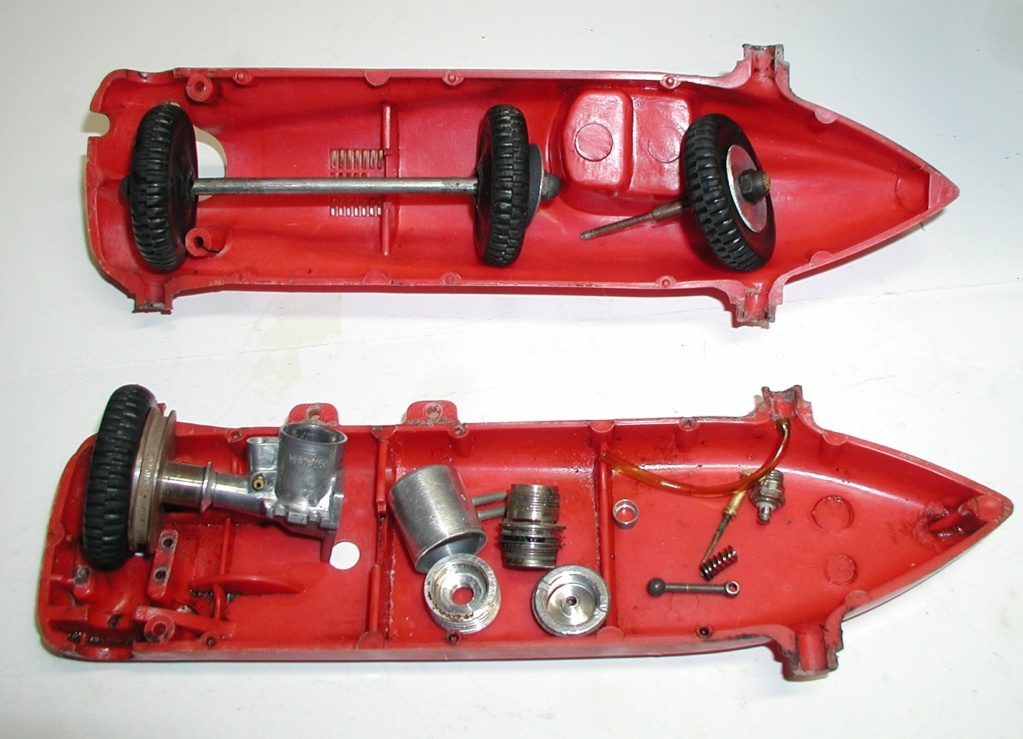 Nice catch, Bob..what does the compression feel like in a Wankel? Is it the same as it feels in a fairly used COX?

My step faher had a RX-7 and claimed it would/could beat my Corvete!!  We never got a oppurtunity to test them against each other. He traded it in on a motorhome and headed south!

Yeah-I'd enjoy another of your Resto-Rebuild logs on this one! 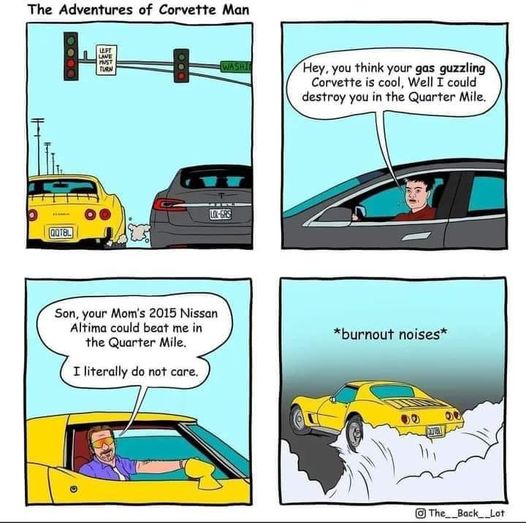 The Graupner/OS Wankel is not mine. Internet picture.  Bucket list.  I never bought one because I thought priced too high.  Now they are out of sight.

Yes, most any sedan could out drag my '74 Corvette.  195 emissions choked anemic horsepower and 195 lb/ft of torque my RX-7 could leave it in the dust quite easy.  But looks, wow.  I and everyone else loved it.

Making araingements to pick it up Monday.  I made sure no one was going to try to start it.  "Barn" find actually garage, but barn find sounds much more car guy like.  My grandson, Marks son lives minutes away in South Carolina went over yesterday to take some picture of the underside.  Looks darn good.  Fuel tank especially, you have to look out for those.

And Kim isn't the only one with "Mud Dabber" claims. 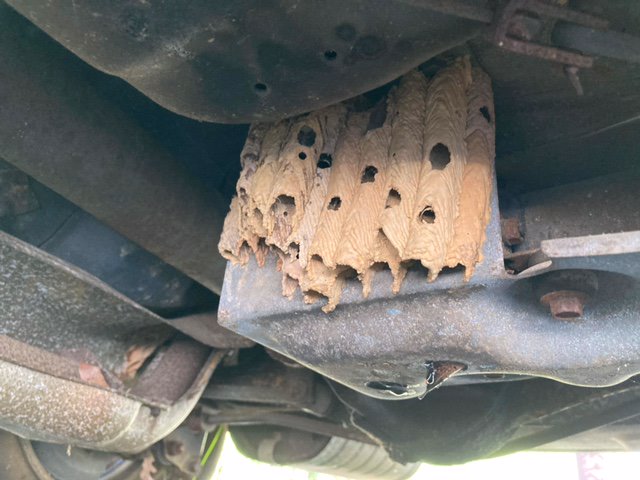 Congratulations on the win! I, for one, will definately not say no to an Off-Topic restoration.....

NEW222 wrote:Congratulations on the win! I, for one, will definately not say no to an Off-Topic restoration.....

Thanks Chancey, that's two out of a couple of hundred.

Now the worry sets in until I get it here under cover.  Will someone steal it (It's sitting outside), will someone saw off the catalytic converter, will the transporter crash (Shades of Marks totaled Mustangs while being transported)  etc, etc...

I haven't been this excited since I skated into a fast flowing river at about 12 when past the light of a bonfire. You can hit what you can't see.

rsv1cox wrote: I may be absent here for a few months unless someone wants me to start an off-topic build blog.

I'm all for a build blog.

I see you are getting it , nice looking project > Heck yea build log<

The first gen RX-7 is one of my dream cars. Nice fixer-uppers in Germany start at 4-5000€, not bad. I spent a couple of hours looking at a bronze 7 with a tan interior, original alloy wheels and all. If only I had the space.

”VolksPorsche” 914 is another, but prices have skyrocketed lately.

Well the back story is:

Mark was visiting his son, my grandson in South Carolina a month ago when he saw a camper parked in a lot and stopped to take a look. Beside the camper was this Mazda RX-7. The owner of the camper was there and Mark commented that the RX-7 was the top of the line GSL-SE which surprised the fellow who happened to own both camper and car and was the owner of Wooten and Wooten auctions.

He told Mark that both the camper and the Mazda would be auctioned on the 19th. So Mark took a couple of pictures and sent them to me. Red meat in front of a Tiger.........well a Poodle maybe. Got the guys number and gave him a call, asked if he would consider a pre-auction sale. No. Said he was starting it at $1500.00 and gave me a link and said he would call me when the bidding starts. He commented that he was impressed by my son.

Three weeks passed and I watched the number of watchers climb up to 15. Haven't got a chance I thought but I made an initial on-line bid of $1500.

Mark was watching the auction live on his computer some 500 lots. I got a call from one of Wooten's phone guys a couple of lots before the RX-7 was to appear. Ok, he said it's gone live. I was the only bidder and got it for $1500. Pennies on the dollar.

Sold in Gaston South Carolina in December 1983, one of the first 1984's built. Stayed in salt free SC (I ran a CARFAX) one owner all it's life. 136K miles garage kept. Pretty happy.

Getting ready. Modelling in the rear-view mirror for now. Basement workshop cleared of projects. What was, now is. 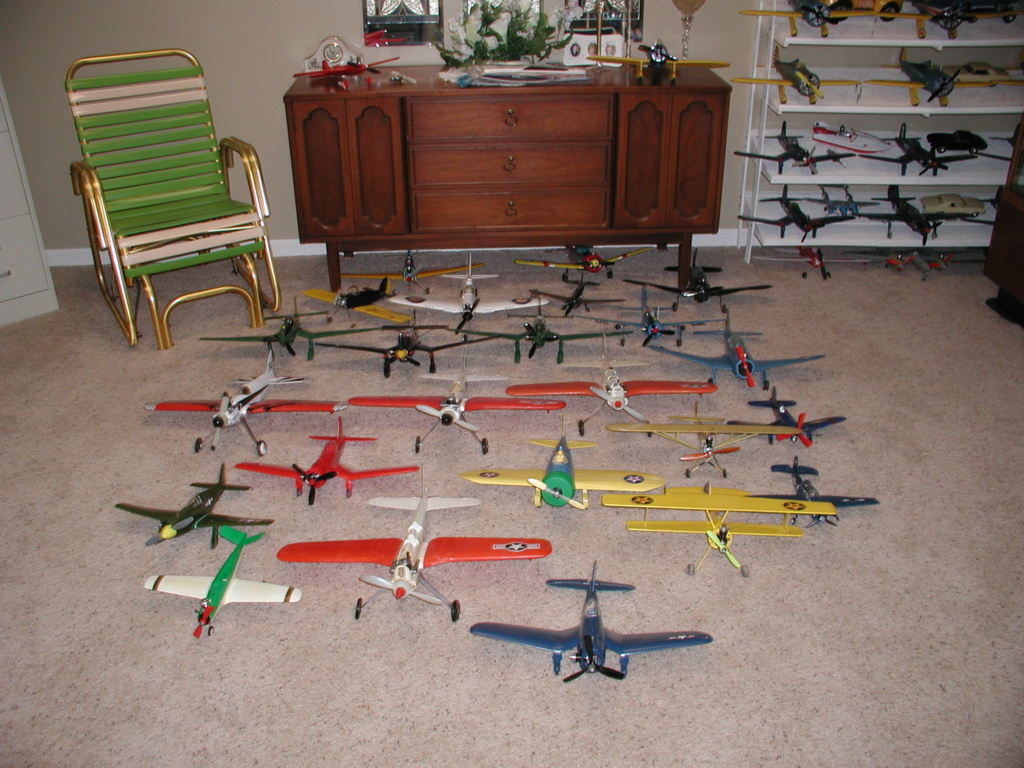 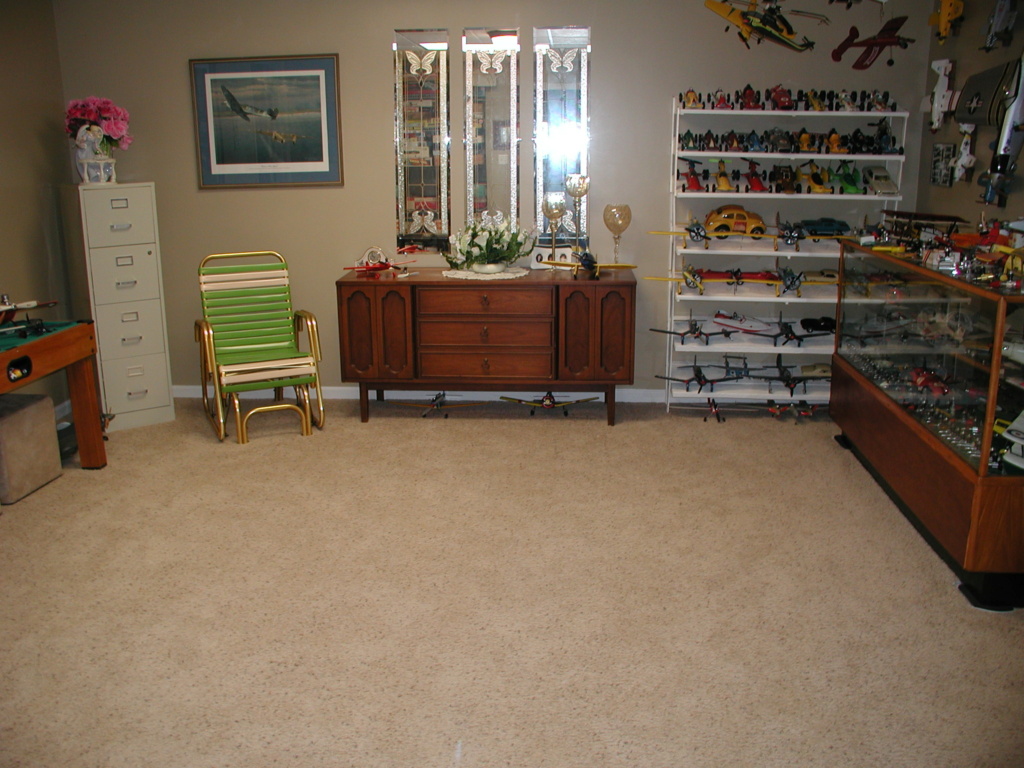 And a great story / history to go along with teh car and how you came about to getting it.

Congratulations on your car Bob, I’m impressed by your energy and will be looking forward to your new project…. Now when it’s too cold in the shop for the car come in and restore some models for us to see

I had a contemporary to your Mazda ….1983 Datsun 280 ZXT…. Owned it for eighteen years, from ‘92 to 2010…. Kept it maintained to a tee…. Even got the factory repair manual and turbo addendum for it…. When I sold it still had the full fill tank for the decompressed spare and the wheel chocks still had their cellophane wrap…

Got the Datsun/Nissan 350Z now sitting out in the four car garage. It's not going anywhere.  Musical cars, it will get moved over one bay into my workshop and the Accord will take it's place opening up room for the RX-7.  Cleaned out the two car this morning, got rid of all those boxes, put them up in the loft.  One day all those engines and models will be turned back into cash, either by me or my hiers so I saved the boxes.  ebay in, ebay out. 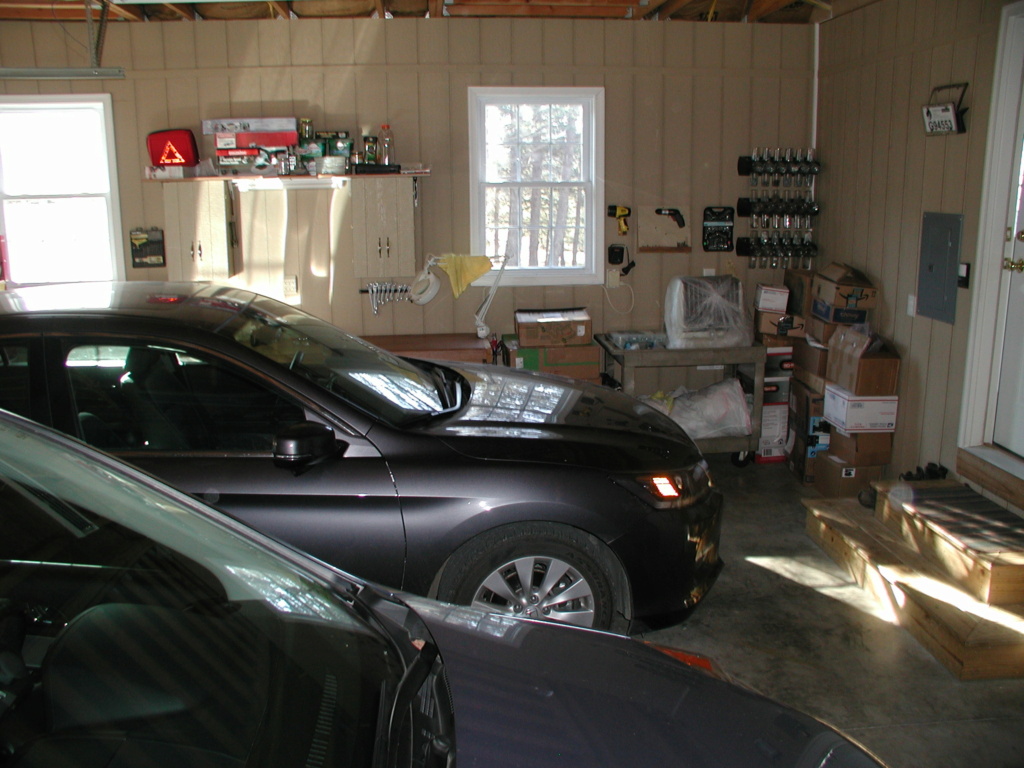 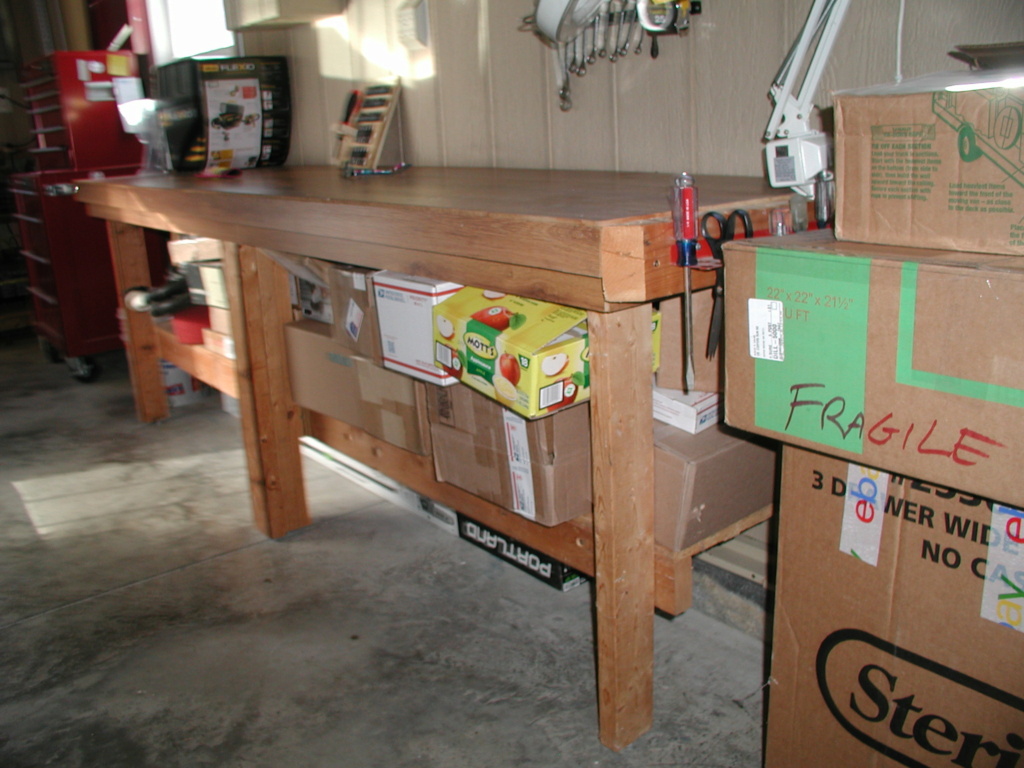 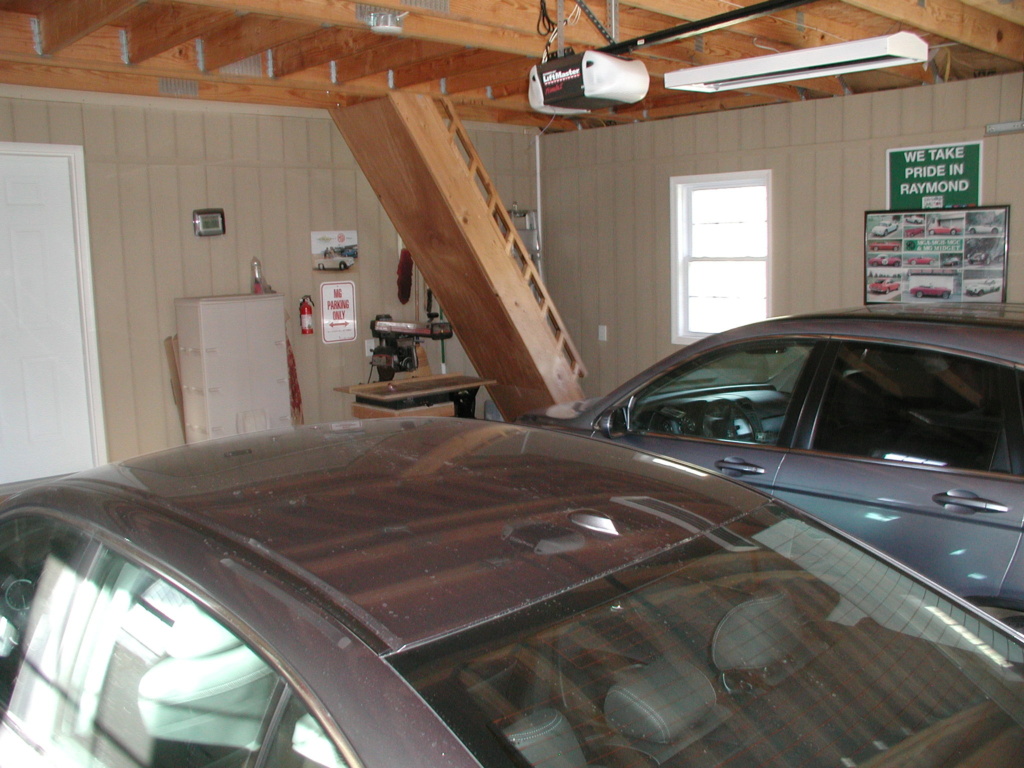 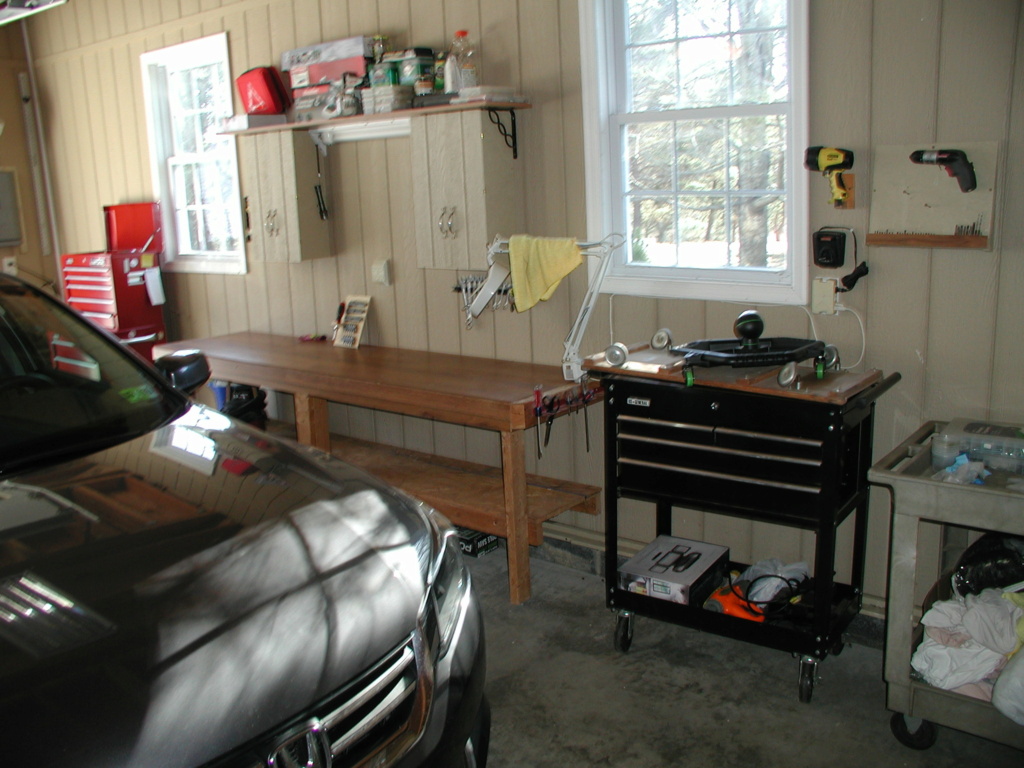 Clean workbench, not like the beat-up greasy bench in the four car.  Hopefully it will stay that way until Spring when the real work will start on the RX-7 and we will reverse the musical cars.

Necessary, because this Winter there is no way I could heat the four car and I'm not waiting to tear into this thing.  Got two kerosun heaters in the two car ready to fire-up.  Moved the, I want to say cheap, but it isn't Harbor Freight roll-around into the two-car.  Big castors, nicely constructed it's got the big tools in it that the Craftsman doesn't.  Brought the tool caddy and the creeper over too. 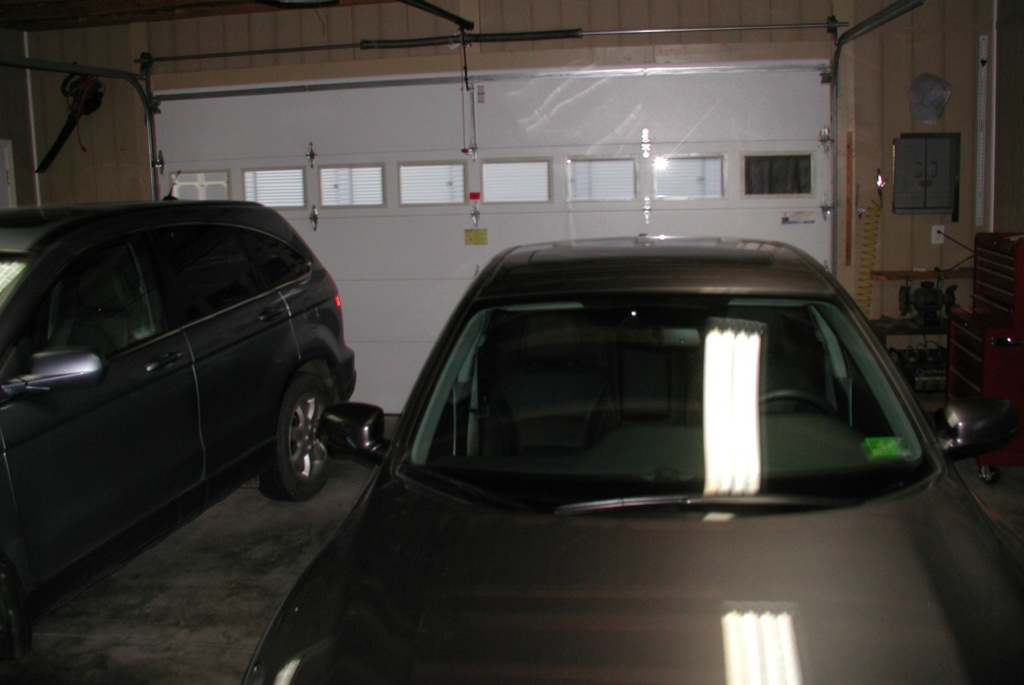 I remember when the 240Z came out, wanted one but couldn't fit it in.  Same for the 260Z.  Then came the 280Z.  Mark, then a teen ager and I took a new one for a ride.  Mark wanted to drive, so I moved over and let him.  He started driving it like he stole it!  Not So!  Got him out of the drivers seat fast.  You don't treat new engines like that.

Almost came down to a coin flip, but I wanted to try a Rotary and moved over to the Mazda dealer.  The rest is history.

When I was a member of the 300th Army Reserve Band, Bell, California in the late 1980's, a fellow friend and clarinet player, Horace, owned a Mazda RX-7 sports car in red. Got to ride in it as a passenger, turbine smooth power and quick. It's too bad they don't make them any more. I was newly married and settled for something more affordable, a low mileage used 1984 Dodge Aries in 1985. That car, my wife, Rosalinda, who is petite, could scoot the bench seat all the way forward and see out the car and touch the gas and brake peddles without blocks.

Before, I had a 1976 Ford Pinto that I had repaired the body and various mechanical repairs plus repainted the exterior prior to getting married. She would sit in the low rider bucket seats, you basically saw a pair of eyes just above the door sill. In the driver's seat, she was viewing the front of the hood through the space between the dash and top of the steering wheel, not a good thing, hence the Aries.

Back in 1974, I had a 1970 Mazda 1800, larger than the Toyota Corona 4 door sedan, sort of resembled a BMW. It was a very comfortable and smooth riding car even with its 4 speed manual transmission. Only caveat to the car was not being as popular, very few auto parts by other makers were manufactured, requiring often going back to the dealer. Dealer parts were considerably more expensive, about 3 or 4 times the price of NAPA parts. It had revolutionary air shocks, but I paid like $60 each when NAPA parts for other cars was around like $16. When I started college in 1975, about a year later I got rid of it so I could afford living as a student. 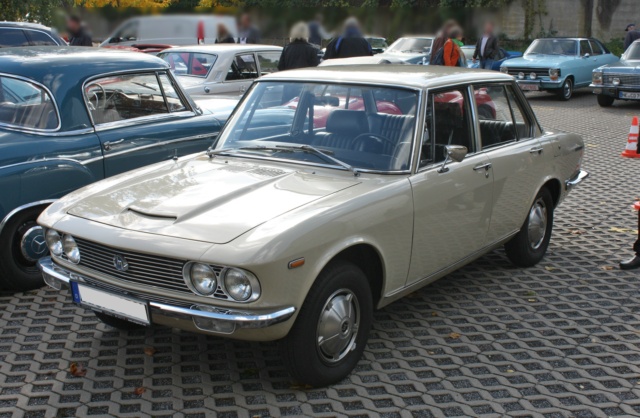 Bob, your RX-7 looks similar to the Ford Probe bodies manufactured by Mazda, which I heard was based mechanically on the Mazda 323. (Parts for it from auto parts stores were cross listed for the 323.) I can see the heritage. Back in the early 2000's, we bought our son a used Ford Probe during his junior year in high school. It had the extra body panels added to make it look like a racing car. Here's a photo of the late 1980's one but without the fancy fender flare mods and racing like front and rear bumper molds for streamlining my son had. (I bought it from the "Lemon Lot" (Auto Crafts Shop reserve parking lot for airmen to sell their used cars at Cannon AFB.) 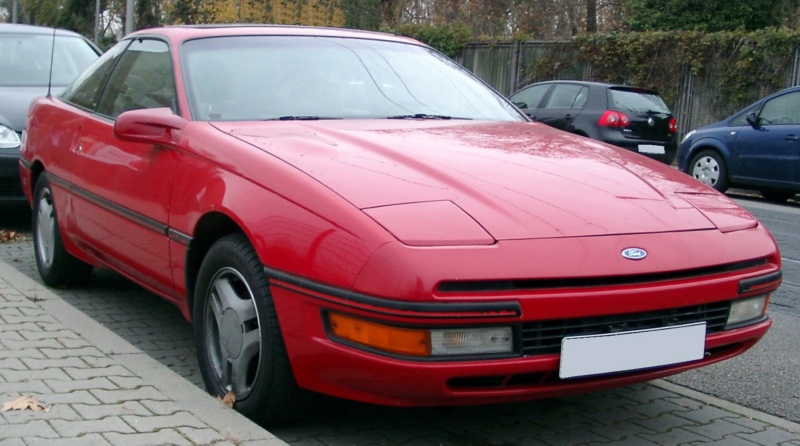 Bob your basement workshop is neater than the guestroom in our house. Man, I envy your precision and being so well organized!...