On our flight line the ground crews would tell the pilots, "1 burning, 2 Turning" or "2 burning, 2 turning" a not to a CH47, Uh1, AH1, or UH60 that the turbing engines were running and BOTH rotor sets were not tied down and spinning up. Yes the pilot can tell the engine did light and usually can see that the main rotor is starting to spin up. However the Pilots can not see the tail rotor. Became safety way of life for flight crews because too many times a helicopter was fired up with one or both rotors still tied down


Of course on that bomber it has a lot more meaning

When I was 12 or so, one flew over our farm, at altitude.  It was quite a thrill for a young model airplane enthusiast.

First kit model, a static plastic one was a C-47 Dakota (Douglas DC-3). I was in 2nd grade, 7 - 8 years old. Then the next year, got a small B-36 model kit. The B-36 was always an impressive airplane. I remembered something about my father mentioning, I was high school at the time. He had already been retired 4 or 5 years. Some years back, a winter storm came through, news reported so many grounded at a particular SAC (Strategic Air Command) base. He commented that the Soviets then were unaware that the US had so many in the inventory. They had estimated a smaller amount.

I liked the B-36, because of its unusual pusher piston engine configuration. I thought it interesting that they would include 4 turbojet engines. (Then they didn't have low or high bypass engines - basically jet powered ducted fans.) The jets would be more effective IMO, at the higher elevations.

Watching James Stewart in the B-36 movie scenes, seated next to the flight engineer, I get the impression that the Air Force told him to "see but no touch, watch those blinking lights!"

Along the same lines as the B-36, another aircraft that has been a favorite is the XB-42 Douglas Mixmaster bomber. 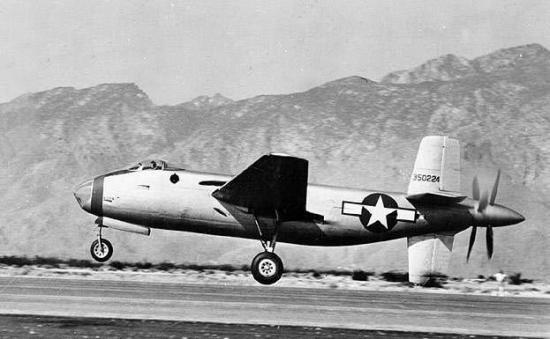 IMO, this aircraft would make for an interesting Cox aircraft with say a .020 Tee Dee mounted exposed on back to a round bulkhead in pusher configuration.

Speaking of helicopters, then in the late 1970's, I remember an AH-1 Cobra in the Hawaii Army National Guard hangar on Wheeler AFB. (Base was across the highway from Schofield Barracks, home of the 25th Infantry Division. The Army had hangars on the base, still had most of the WW2 hangars in use. Army then had CH-47 Chinooks, OH-58 Kiowas (Bell Jet Rangers), and UH-1H Iroquois (Hueys). Air Force still had some Cessna Mixmaster COIN aircraft hangared on the base then). The AH-1 was a veteran, had a section of its electrical wiring harness in the tail boom with spliced in wiring, metal patches riveted in place. Wiring was shot apart by enemy action in Vietnam.

I watched it again and this time read the comments, many about the photography and the brillance of the color film.  Loved the scene where the B-36 is emerging from the clouds.

rsv1cox wrote:Jimmy Stewart a true U.S. citizen flew B-24's in WW2 in combat.  Didn't opt for one of those cushy jobs in Hollywood like Clark Gable did.

The following makes for an interesting read regarding Clark Gable.

rsv1cox wrote:I watched it again and this time read the comments, many about the photography and the brilliance of the color film. Loved the scene where the B-36 is emerging from the clouds.

It does make for a very nice impressive scene, punching through clouds and exiting them.

Maybe so, but the reports I have read about Gable were not so glowing.  Photographer vs. pilot.  Hollywood you know.  That doesn't mean I'm not a fan.  Frankly my dear, I don't give a damn!

Jesus Lord.. X6 radial engines in PUSHER configuration... and pairs of JATO pods? am I correct? The B52 would almost immediately succeed it, early in 1955.

We live in strange times, Bob, sort of reminds me of when the Vietnam war was going on. At times, it was of no advantage to be wearing a uniform in some woke communities back in the early 1970's. It wasn't all folk don't get me wrong. But I remember the hatred for the soldier, which I was one. Sometimes we were advised not to wear our uniforms outside the base. Strange how some people were blaming us for a war that they should have took up with the politicians whom they elected. I didn't get drafted, volunteered under contract, but I knew others who had no say. Draft ended in 1972, but my Basic had both volunteer and drafties, so did my advanced training and duty assignments, too.

rsv1cox wrote:Maybe so, but the reports I have read about Gable were not so glowing.  Photographer vs. pilot.  Hollywood you know.  That doesn't mean I'm not a fan.  Frankly my dear, I don't give a damn!

You've seen some info that I haven't, but then I wasn't looking for it either. Searches don't bring that up now, may be it did in the past. For what it is worth, well, it is a fact Clark Gable senior joined and wore the uniform. He was an older man at 40 when joining. For some, that is military retirement age. Most in Hollywood did not serve, although some did. The War Department took advantage of it to make indoctrination films and films for the public.

At least he could not be be accused of not wearing a uniform. I suppose I could be blamed for playing a clarinet instead of being infantry, artillery, or armor. But I joined. He is dead now (Nov. 16, 1960), I just let sleeping dogs lie.

Hollywood itself was pretty good at supporting the servicemen and women though during the war.

The "Hollywood Canteen" was very active. Any serviceman/women in uniform could drop in for coffee, eats and companionship. Notables like Bette Davis, Hedy Lemar (a story in herself) and others participated. There was a movie based on it that I have watched on TCM many times.

roddie wrote:Jesus Lord.. X6 radial engines in PUSHER configuration... and pairs of JATO pods? am I correct? The B52 would almost immediately succeed it, early in 1955.

I watch it mostly for the flight scenes, but the beginning and end features a Plymouth convertible identical to the one I had in my high school years.  I remember that steering wheel, horn button, and radio speaker bezel like it was yesterday. 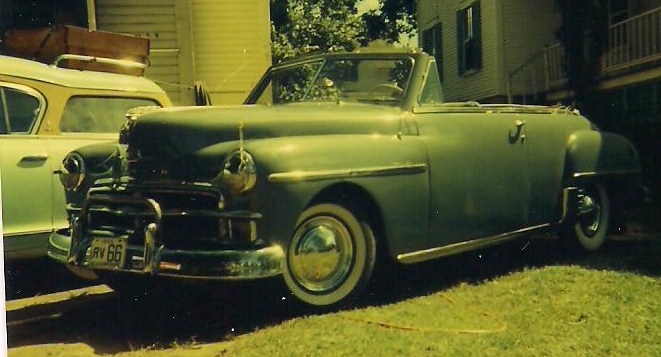 As awesome as many of OUR strategic bombers were in the 40s and 50s. And frankly Holly Woods use ( of various aircraft and ships) in Pro military films was usually very good. I personally am partial to the B52 and have witnessed their training here at Fort Hood and especially seeing the con trails over Iraq in 1990/1991 as they carpet boomed Sadam's forces. 13 clicks away the bombs landed and literally shook the earth or many minuets.

Fort Hoods Gray Army Airfield (GRK) (now joint use with Killeen Commercial flights) was only 1300 meters from my Office and we had a second story balcony from which you could smoke and watch incoming flights to the active. During my 12 years we always got a front row seat as various B52s from Tinker AFB, and C5s or C17s from who knows where do training on our runaway. Most of the time simple touch and go exercises. Due to many of us being deeply backgrounded in all things aviation, some of use could watch the approach and comment..."That student is in trouble" and sure enough as the craft was about to screw up, stall, or land short...we smiled at each other because we knew in the cock pit the instructor Hollered "I HAVE THE CONTROLLS" and we saw and heard MAX MILITARY POWER applied and the craft lift and go around.

While the lumbering C5 training was impressive to watch we all seemed to have a great affinity for the Tinker AFB B52s. Long time ago what is now Gray Army Airfield belonged to SAC as a Heavy bomber and Nuke facility. The hills are all tunneled for Command and control, maintenance, and weapons storage. Many tunnels are permanently blocked off but there are still some remaining but strictly controlled against curious minds wanting to explore. Once a Year we host a tour, mostly for new Fort Hood command and staff and the occasional President or Congress critter.

As a former Field Artillery Nuclear munitions, guard, assembly tech, and Destruction to prevent capture of the weapon: I was and still am curious about the bunkers and Nuke maintenance tunnels. Of course all are sealed and have many of meters before the entrances with Radiological warning signs.

Any way thanks Bob for the post and video...very nostalgic and resurfaced a whole lot of distant memories

Of yes before I leave. My 2.5 acres are just 16 miles west of Fort Hood. The typical B52 or C5 or C17 training flight paths are to the east or to the west as the active basically is north south. and 90% of the time prevailing winds are from the south. When the aircraft exit and turn right (or west) they usually fly around 700feet AGL and almost seems like my house roof is a way point for the turn back east to the Airfield. Even though I know they are above stall speed (168 Knots) they all seem to just lumber along at a fast paced walk.