Is anyone aware if Cox sold works tuned engines , and if they did what the tuning work completed involved.I have been offered a works tuned engine (which i intend to buy ) but i have no recollection of Cox ever offering such a service. Apparently the engine was bought directly from Cox by the current owner many years ago as a works tuned version ,,, any ideas -- thanks

Don't know of Cox doing this except that they might have tuned their engines to perform flawlessly and with the greatest power when they did various demonstrations, like for a time with a circle at Disney in Anaheim, CA back in the 1960's and perhaps late 1950's.

I do recall of some speed shops that sold custom parts for Cox. I think one was Cox Kustom Craftsmanship perhaps run by Dale Kirn, used to advertise in the modeling magazines and in the Ace R/C catalog, back in the late 1960's through 1970's. I think they would tune your engine if you sent it to them. Since I didn't keep these catalogs, the memory gets more vague each year.

Hi GG , thanks for response . your recollections are the same as mine . I know of Kustom Craftsmanship , i have their fine thread needle valves and i also used there modified clamp heads with flat filament but was not aware they would set up a motor for you . The motor i'm looking at has an original Cox needle valve so that probably rules out Kustom involvement . I wonder if Cox offered the opportunity to buy selected matched parts rather than standard production line assembled engines ?? . One tell tale sign with my motor is the slotted prop screw has been replaced with allen head black bolt - i've seen this feature used on a few occasions ..

flytilidie wrote:..........One tell tale sign with my motor is the slotted prop screw has been replaced with allen head black bolt - i've seen this feature used on a few occasions ..

I'm not sure that this would be indicative of any particular tuning. I say that only because I always replace the slotted prop screw with an alloy socket head 5-40. When I do, I will cut the screw to length so that it tightens up just before bottoming out -- I think this stiffens the nose of the crank and adds some strength. But, none of my engines could be classed as tuned.

flytilidie wrote:Hi GG , thanks for response . your recollections are the same as mine . I know of Kustom Craftsmanship , i have their fine thread needle valves and i also used there modified clamp heads with flat filament but was not aware they would set up a motor for you . The motor i'm looking at has an original Cox needle valve so that probably rules out Kustom involvement . I wonder if Cox offered the opportunity to buy selected matched parts rather than standard production line assembled engines ?? . One tell tale sign with my motor is the slotted prop screw has been replaced with allen head black bolt - i've seen this feature used on a few occasions ..

I have one of Kustom Kraftsmanship's catalog from 1996 (need to get it scanned and posted here -- someday).
As for Kustom Kraftsmanship doing "special" work on Cox engines, yes they did.
In their catalog it would give you prices for custom modifications on your engine if you shipped your engine to them.
They also had it where you could purchase a custom engine from them with the modifications made to you spec.

You pay for the "custom" Kustom Kraftsmanship Cox engine and then have it shipped to your house.

I have a "few" of Dale Kirn's Kustom Cox engines.
Prices were almost twice of what an original Cox engine would be. 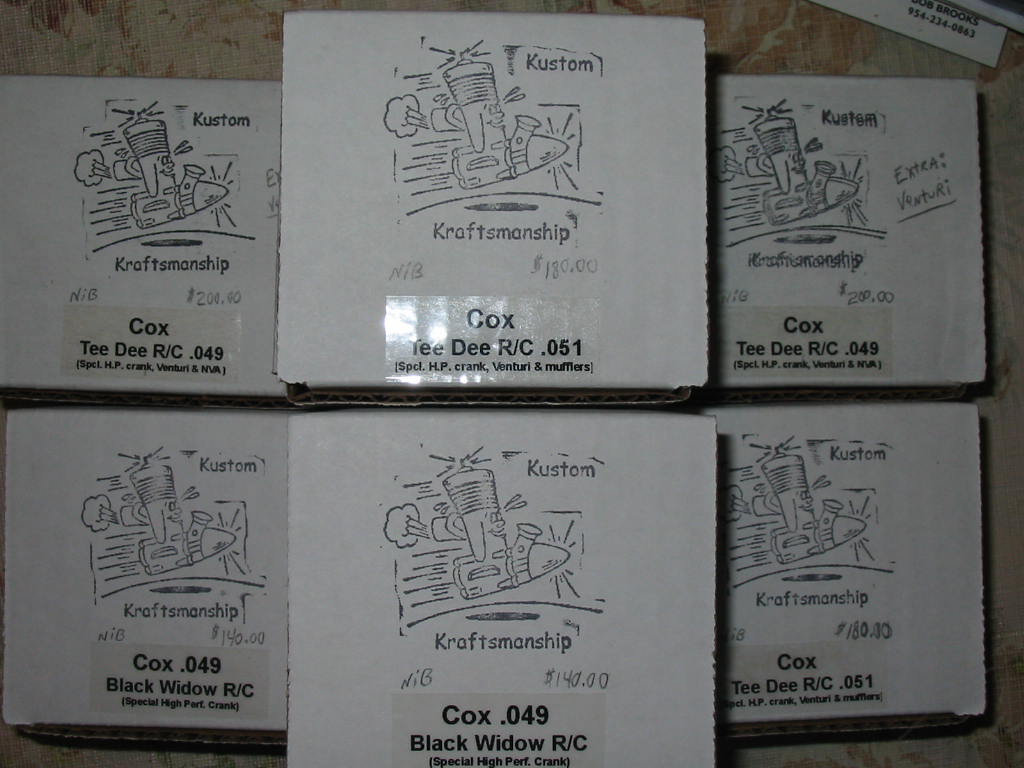 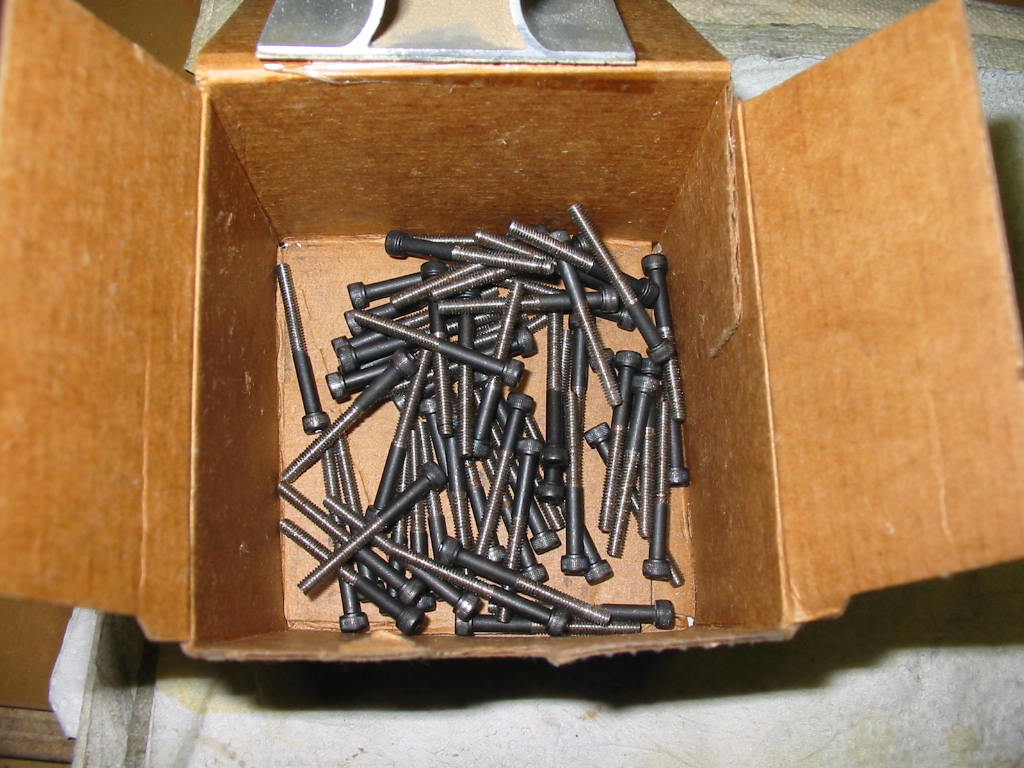 Lots of great information -thanks all . As this motor is brand new (never been run ) and in the same sate as it was received from supplier many many years ago with the allen head screw in place maybe it is a Kustom craft engine . I think we can rule out that it was bought from Cox (otherwise it would have the standard propscrew in place ) . So did Kustom doing any physical machined modifications or did they just add there own select parts to the engines they sold ( maybe i can check internals when i receive engine) .Or did they modify to suit your application ie free flight power ,, 1/2A pylon racing or CL speed . I have a feeling the owner originally bought this for free flight 1/2 power competitions and therefore this may have driven the advised tuning that was done. Can i also assume that the tuning would have also specified the fuel mix to be used , going back to when i used to race these in 1/2A pylon events i think i recall Cox sold a 20% nitro competition mix ? .. thanks again for your help

What I got from them (if you look on the top of the boxes) as a high-performance crank, The Tee Dee 49 and 51 have their needle valve assemblies, and they do the shimming of the piston cylinder for timing.

Their catalog gives an entire listing of modifications even for rat racing modified engines.

I just gave the instruction sheet to Jacob last month of how Kustom Kraftsmanship shimmed the cylinder.
It is in the last "kit" that I have from Dale Kirn.
It is available on the left side bar "INFO" section under Instruction sheets. 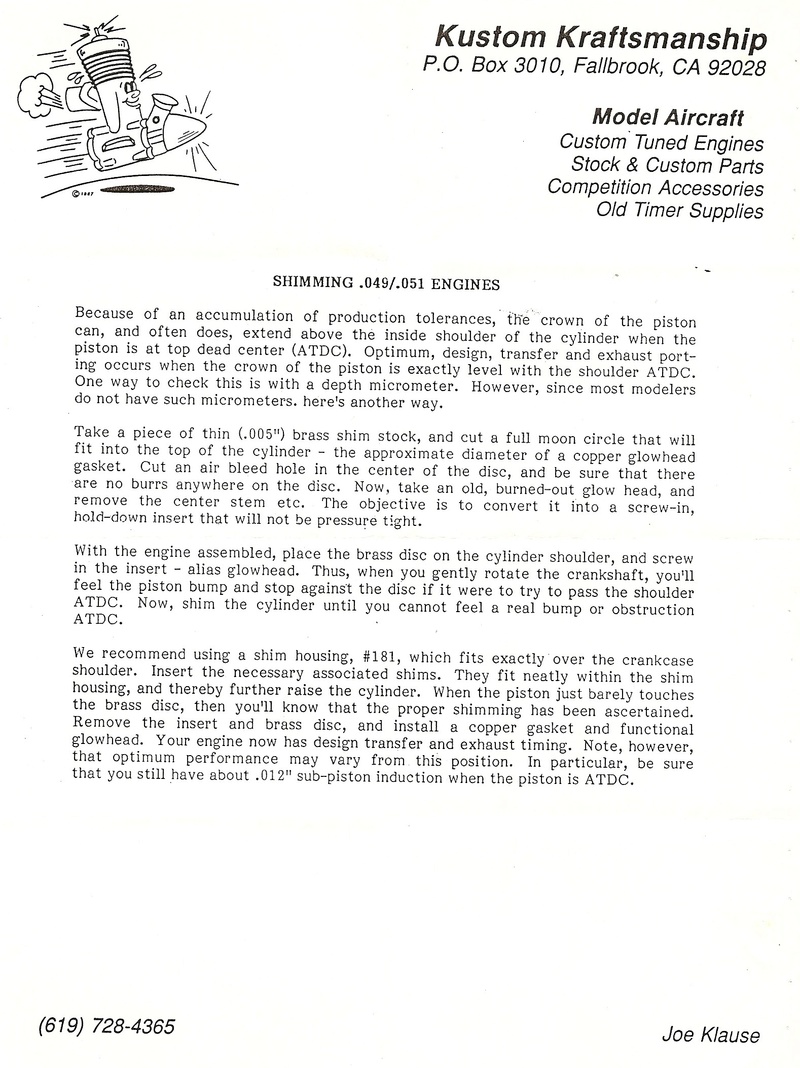 Shims from the kit and guide ring for the shims: 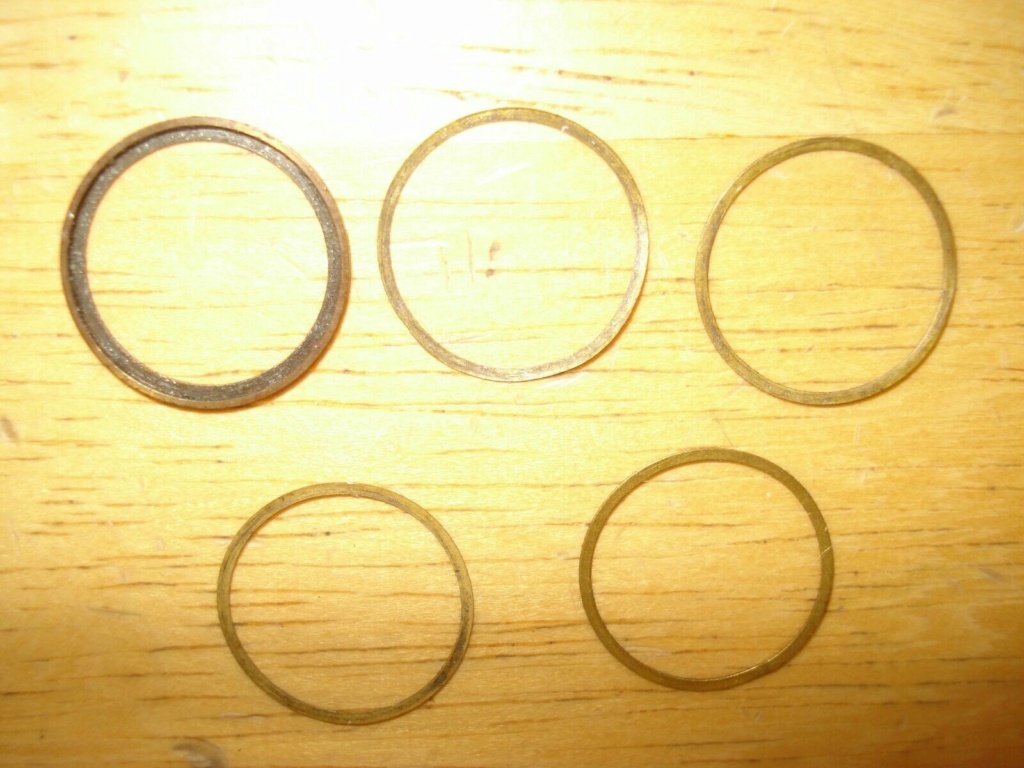 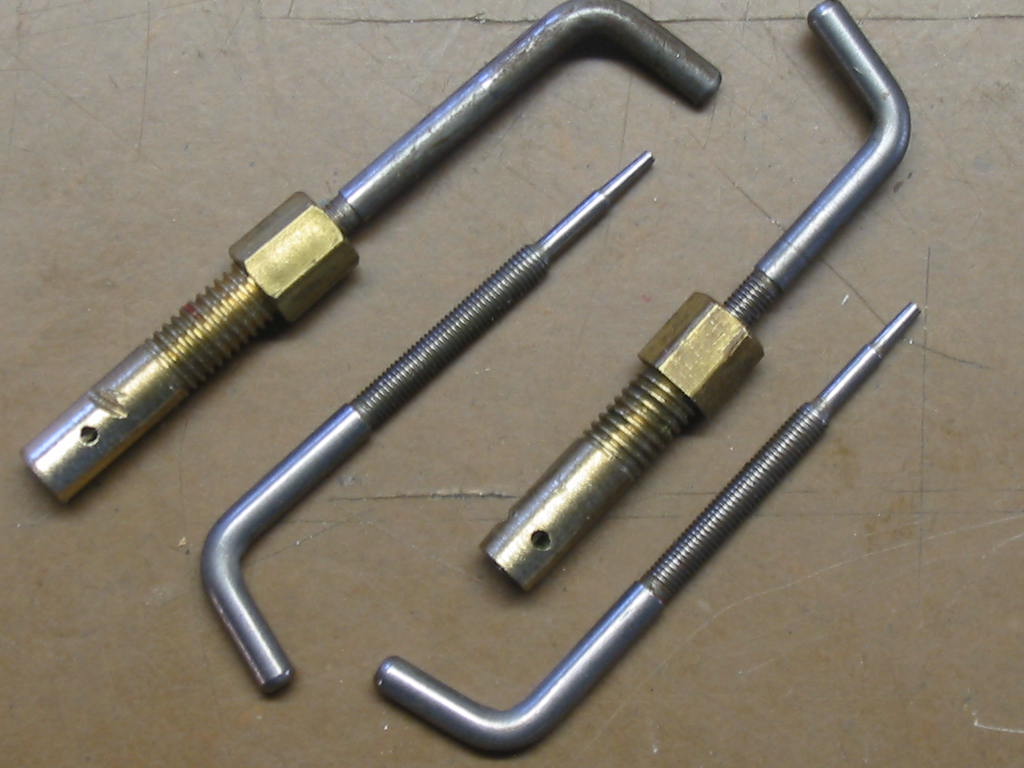 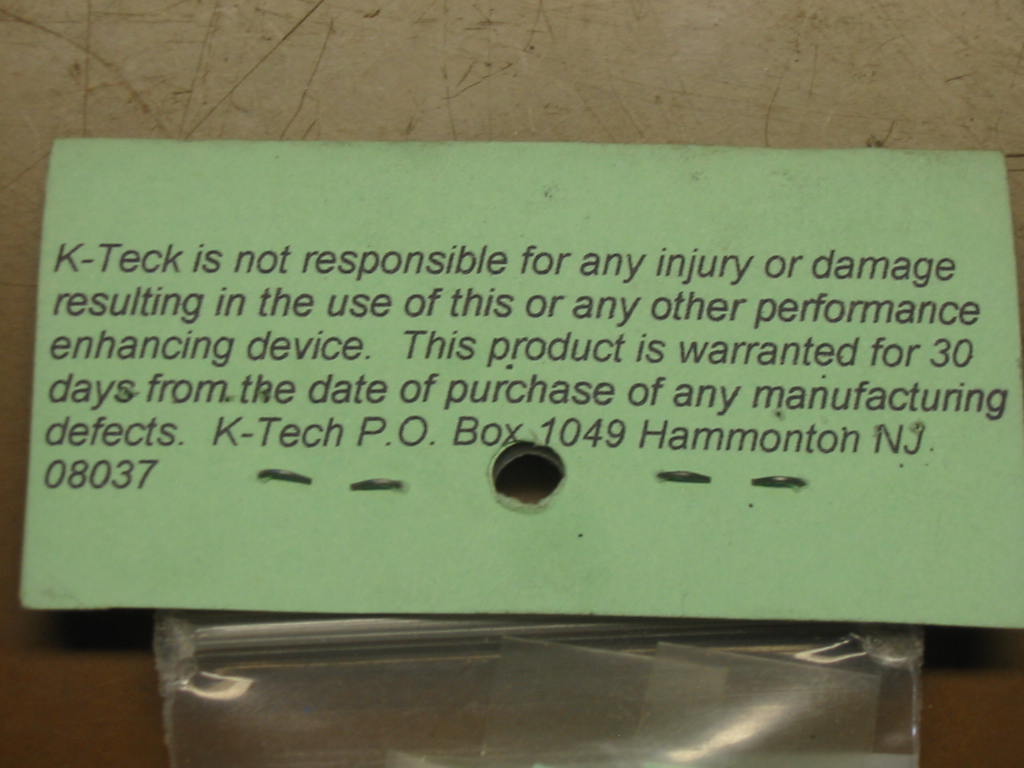 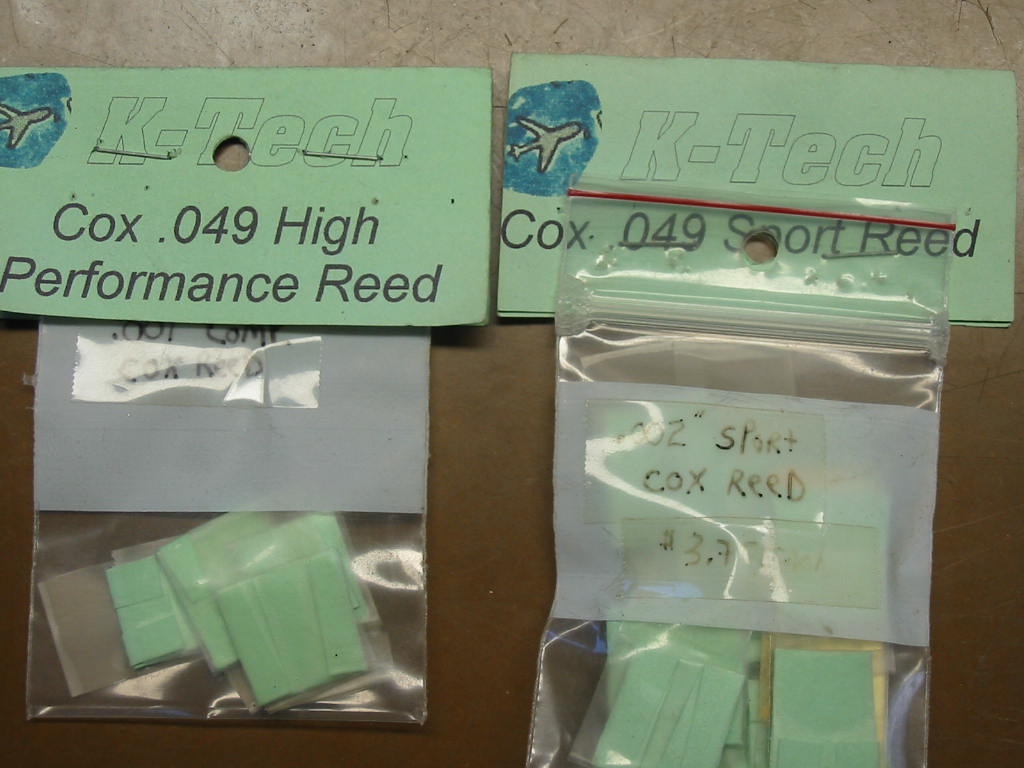 And a photo of a Dale Kirn's Kustom Kraftsmanship's modified Tee Dee .049.
With special H.P. crank, Allen head bolt for the prop, Kirn's needle valve assembly, shimmed head kit under the cylinder and high compression glow head.
Missing in the photo is additional shims for under the glow head (as needed).

The paper under the engine (on the left of the photo) gives recommendations for fuel, props, and break-in, as well as resetting the piston and if problems with the engine to send it back for evaluation and repair (included is possible repair costs too.)
Also, on the instructions it says that this engine was tested before shipping.

This engine was Kustom made back in 1991 and has never been run by me since Kustom Kraftsmanship ran it, or out of the box until today (Jan.15.2023)
It is not gummed up and free turning with good compression.
Receipt inside the box says it cost me $53.87 for this engine. 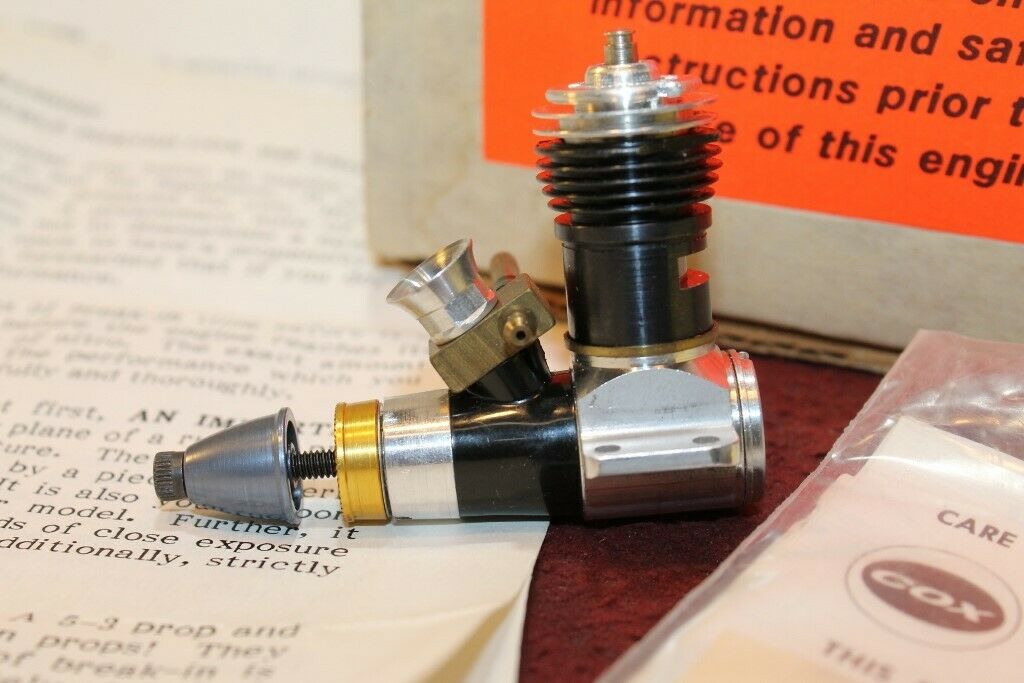 So, if your engine looks almost like mine, then it might have been a Kustom Kraftsmanship modified engine?

Received my engine today , very pleased as it is in excellent unrun condition as seller advised , and includes a very nice 5.5 nch diam carbon prop that looks around 3inch pitch ( im going to check this later this evening) . comparing to my standard engines the differences are
1) kirn kraft fine thread needle valve assembly fitted
2) allen screw propscrew
3) the venturi intake looks to have been played with , throat diam 3.6mm into crankcase with no gauze filter fitted and intake appears to be cleaned and smooth out
4) pressure nipple fitted into backplate

cant see any difference in exhaust port height when compared with my other engines and no packing washers between cyclinder and crankcase . My only other observation would be that the engine feels very free . Can you advise how i can attach pictures so that i can share with you please - you may be able to spot additional differences . Delighted with my purchase ,,,,

flytilidie wrote:Can you advise how i can attach pictures so that i can share with you please - you may be able to spot additional differences.

In the post composing screen, there is a photo upload icon. The dialogue is not hard to do, but a little different than other forum editing ways. I'm not at my PC currently so mobile cell app is different. Somewhere in the forums is a thread on how to do. You might want to go to the main menu and is probably in the appropriate helps forum and as a sticky (thread fixed at top of list.)