Log in
Search
Latest topics
» taplin twin
by Coxfledgling Today at 1:45 am

» Tuning option
by coxaddict Today at 1:22 am

In customer service, we had the "returns" area,  a treasure trove for sure.  This is where all product returned from retailers and distributors was handled. We would always run over there any time a truck dropped a load at the dock and see what was in it.  Most of the ready to fly and run plastic planes/cars were removed from the packaging and the engines were removed and placed in 30 gallon cardboard cans. Plastic parts went into the chipper to be re-cycled. There were piles of fuel cans and batteries against one wall stacked 5 feet high.  It was rare, but once in a while we would get hobby products, like packaged engines (TDs, Bees, Conquests).  I distinctly remember we got a huge load from an Army Base  PX hobby shop in Germany, and there was all sorts of new old stock, some of which was over 15 years old. I found a 1st run TD .010 in a blister pack,  Space Hoppers in the package, and there was a bunch of first run TD .049s as well. There was also some TD Mk II with a single exhaust and 3 transfers, a very rare engine.

Needless to say, it was always a mad rush when the trucks came in, everyone climbing over each other to get at the "stuff", we even helped unload the trucks!

Burlile, my boss,  used to shake his head at us and say: " You guys are like blind dogs in a meat packing house!"

Jay you make me turn yellow in envy!!

But why did the returned and otherwise untouched items like plastic planes have to be demolished? What happened with never run engines? They got recycled or were free prey for the employees?

My goodness had I been there...

Large retailers like Sears, Montgomery Wards, Pennys and others would get credit for returned product. Although our instructions to the retail customer and policy was to return defective merchandise to Cox directly, in practice most customers would go back to where they purchased the product and ask for a replacement, or exchange. Many retailers would either give the customer an exchange, refund, or open a new one and take whatever was needed to replace what was defective. Cox was fairly lenient with their return policy; it was essentially "no questions asked" if it was returned, regardless of condition.   So most of our returns were opened and missing something or something was broken. Some had been fueled, and many times they fuel had leaked because it had been opened....so we could not sell these items as new because they had been sold once and were now "used". The engines and parts we could give away as warranty replacements, which is why we would glean the returns for parts. The engines technically could not be re-used  in new product, but from time to time I would see the drums of engines being carted off to the production area...who knows what they did with them. We would give drums of the engines to the Boy Scouts and other community based organizations as well.  As employees we were allowed to take  a modest amount of the returned product, especially fuel, batteries, props and glow plugs. In customer service, if you wanted a complete  plane, car or boat in the box from returns, they filled out a "product familiarization" receipt so you could walk out the gate with it and show the receipt to the guard.

In my estimation, there was at least 3000 square feet of the Helms building piled high at all times with returned products.
Once we got a shipment from Kyosho of the Cessna Centurions (R/C ARF) that had been damaged in a typhoon; we  discovered it when we opened the Conn-ex container.  Cox had insurance for this so we made a claim and had to destroy all the "Salt Water Cessnas".  All the guys in customer service had to unpack the container and toss them into several dumpsters, it was sad. Dave Duncan managed to park his pick-up truck on the other side of the fence where we were dumping the Cessnas, and wouldn't you know it?  When we were tossing them in the dumpsters we got a little too enthusiastic and some of them somehow were thrown too hard and high and went over the fence and landed in Dave's pick-up bed, on accident of course.

There was a dump on the South end of Santa Ana which was across from the Navy's LTA base Tustin. As it turns out, Cox trash was hauled there and I went there once because rumors were abounding about people finding complete Cox planes there. I was a kid at the time, 13 years old, and rode my bike some 8 miles  with a friend, to the dump. We found all kinds of unfinished machined engine parts and plastic parts, most was junk, but there was tons of it. Cox eventually had to quit using the dump because people would try and return items from the dump to Cox for warranty repair or service, it became a nuisance. So after that product was recycled.

Really enjoying your posts as a Cox fan! Would you know anything about these car engines? Some were never fueled but had been installed in a model and had been removed with a cut fuel line.
They were sold in lots of 99 engines and I know 100s were sold. They had #1 cylinders. This is my lot of 99. 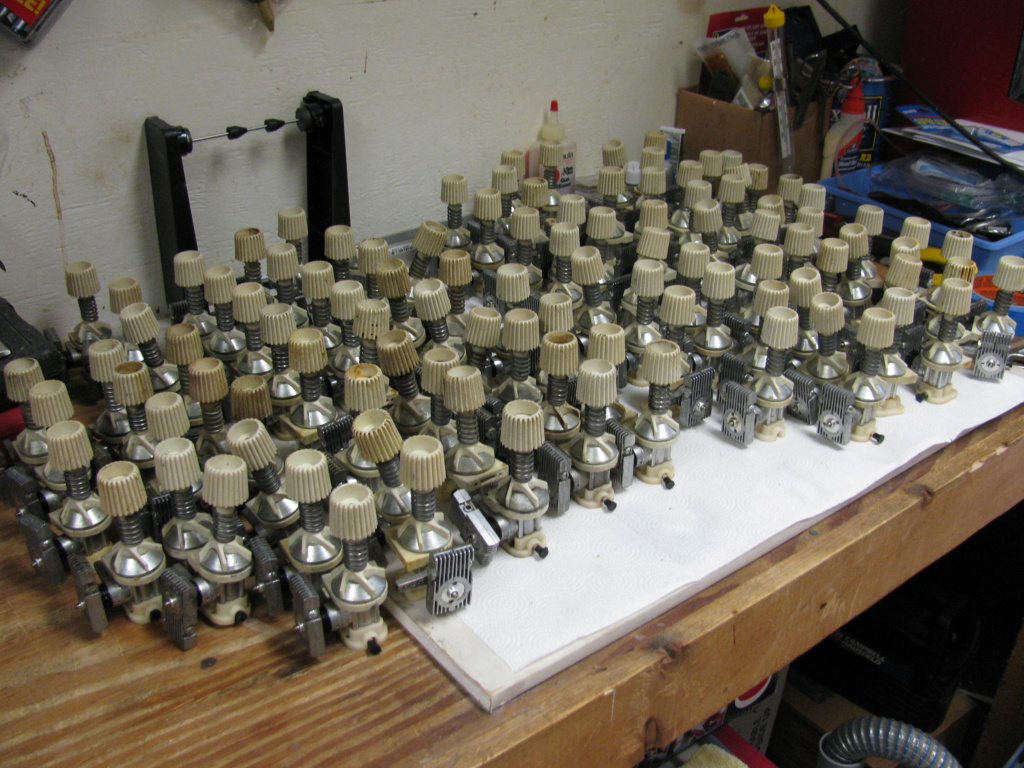 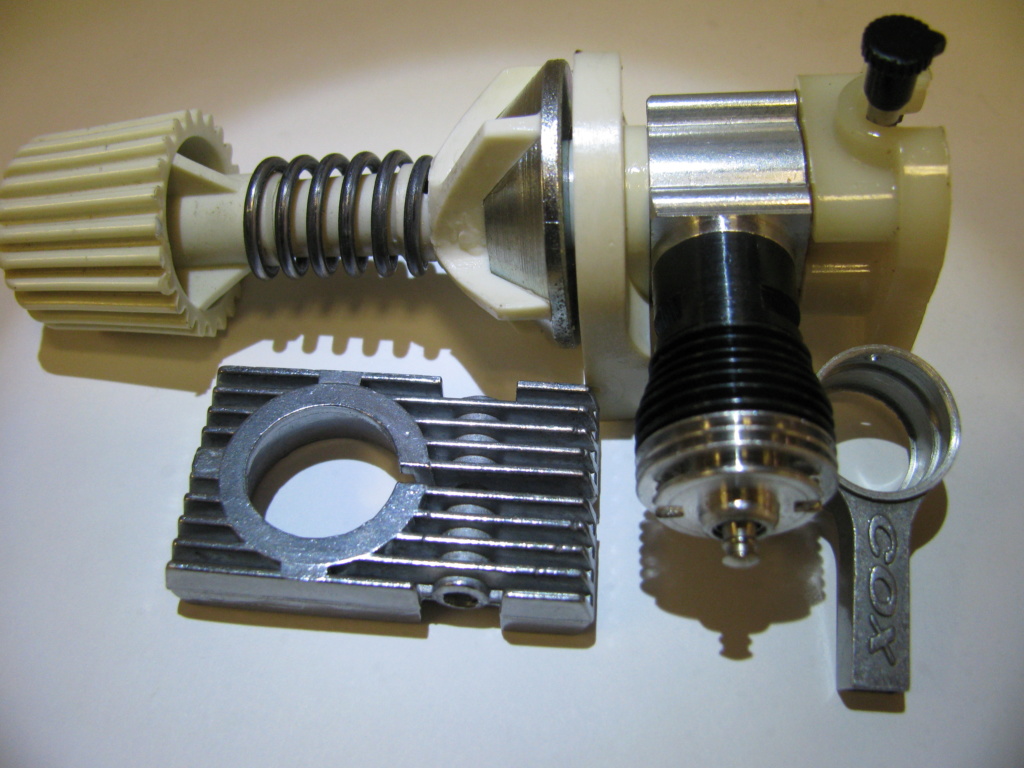 Jay again a very interesting piece of history.. I wonder what a typical "defective" new COX product returned by customers as new was? Knowing the precision and quality of a COX engine it is hard to imagine that except a glow head anything could be defective in a new COX engine..the plastic planes etc. were produced in molds and unless cracked before sold they could not possibly go wrong...

My memory of the cars is a little dim, as we hardly ever got one sent to us for service. Your engines came from a vehicle that had no recoil starter; for a starter it looks like they used a toothed strip/belt that engaged the gear. The later #1 cylinders appear to be of the slotted design. The slotted exhaust was merely the first step on the Cox-O-Matic machine of machining the exhaust. They decided at one point to eliminate the remaining machining steps to cut a rectangular exhaust and this saved costs, plus it left a bar of metal across the exhaust port which acted like a flame guard. Earlier versions had a screen or slotted piece of metal over the exhaust ports as a flame guard.

Many of the returned items had been raided for parts by the retailer, or pilfered by customers at the store. Some had crash damage, some had been fueled and run. In many cases we saw that the versions that came with fuel and a battery (flight kit) the fuel can had leaked, or the battery had gone bad. This was because if they sat on the shelf for long periods of time, they were prone to this problem. In many cases, large retailers would close a store and return all Cox merchandise for credit. Often we got Jerobee cars, and the TNT Mini-Copter helicopters, which did not make, but they used Cox engines and were mistakenly returned to Cox with other Cox items. I think that one of the problems kids faced was that when attempting to start the engine they would flood it, and then kill the battery trying to start the engine. If you were not careful connecting the glow plug clip, it could short out on the glow head and quickly kill the battery.The Flight Pack battery was of limited capacity and if it was over 6 months old it would no last very long, which contributed to the many returns. Although I saw huge piles of returns at Cox, we made many millions of products so it was only a tiny fraction that actually came back.

How were the women that worked there?

Jmendoza awesome insight!!! I love hearing this info!! I learned a lot from this thread!!! I did not know that the slotted cylinder was just an omitted step!! Very cool info!!