What is the spring-loaded gadget supposed to actuate?
http://www.ebay.com/itm/A-C-Gilbert-Vintage-Toy-Airplane-Control-Line-Gas-Powered-Engine-Like-Cox-/151245253154?pt=US_Radio_Control_Control_Line&hash=item2336eb6a22

It's a "auto-pilot" but I'm not really sure how it works, never really studied it. 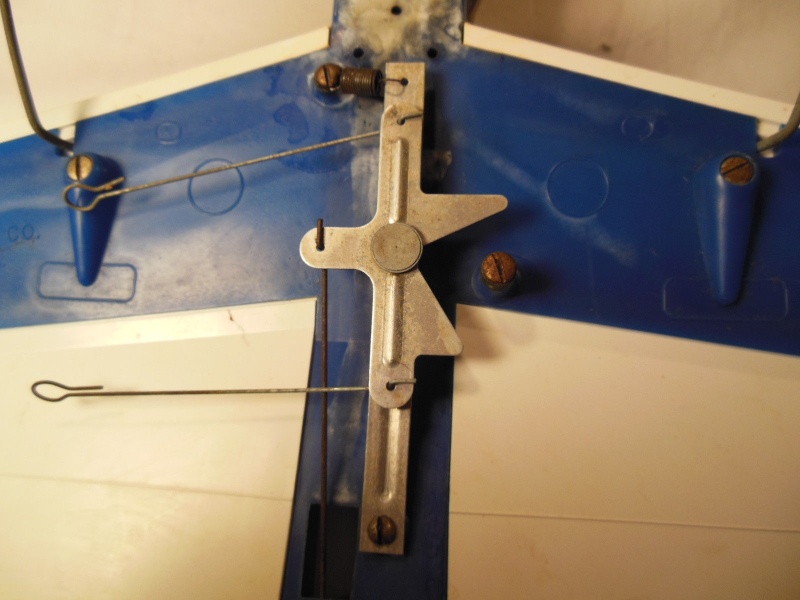 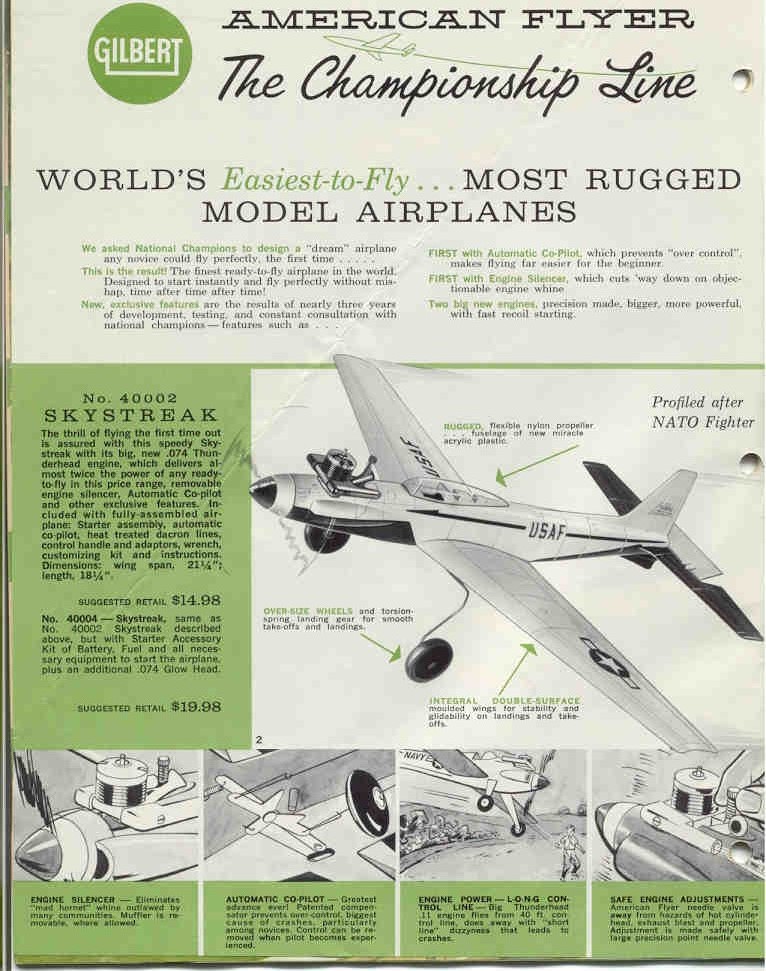 Looks like a lame attempt to keep the pilot from over controlling. Once you could keep it level (assuming you didn't trash it first) you could remove the screw allowing full control.

It looks like the spring will take some of the elevator movement away. kinda like a basic exponential bellcrank, it would be interesting to know how well it worked. From what I've heard this was a pretty good flying airplane, but don't think that was in reference to stunts! 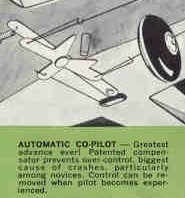 Carl Goldberg did something similar on the Li'l Wizard. The bellcrank was sprung as shown above and it provided a small amount of up elevator should the pilot lose control. On the one I built I omitted it because I figured it was a hinderance. The one my Dad built in '75 didn't have it either. Apparently we were thinking the same way.

@Mark Boesen wrote:It's a "auto-pilot" but I'm not really sure how it works, never really studied it.

Looking at that photo, and the in-board angle on the bell-crank.. when it hits the pin (screw) it moves the bell-crank mount, causing less "throw" to the push-rod and "backs-off" the throw, if the bell-crank is forced full either way.

The instructions show the the leads going out the same direction as the screw pin.  This means that the natural centripetal force while flying (or the aerodynamical forces) would want to take the plane to the left in the picture and stretching the spring as the pilot holds the lines to the right.  If the plane speeds up(?) or the pilot yanks on the lines, the bellcrank mount would pivot so that the corner V in the bellcrank goes into the pin which would restrict the bellcrank movement, and in extreme cases, center the bellcrank, maybe with a little up?

Is the thinking that if the plane is going down too fast the tension on the lines increases and this mechanism restricts control movement or, at least, biases it up?  Maybe the design is to allow the pilot to jerk on the controls (or rely on the natural tendency to do it in an emergency) and center the elevator?  Does it allow full control during take off and landing, but restrict movement during normal flight?  Is the system that sensitive to speed? My guess would be the last option.

It would be fun to play with it a little.

I agree with JayeLK's last theory on the auto pilot. The faster you go, the less throw of the controls.
Just changing the subject slightly, as I posted on the 049 Collectors group, if you go to the ebay listing on this plane you will notice that the .07 engine has a standard glow plug fitted. Many have said this can't be done because there is too large a hole left after removing the insert, but it's not the first time I've seen it done so there must be some heads that can be tapped out & some that can't. The heads came in both machined and die-cast so it would be good to know which can be modified.

Oddly enough, there is another Gilbert plane on ebay at the moment, item 310882471925. It's the same type as the subject of this thread, but it also includes the "Bombs Away" accessory. It got me thinking, how do you release the bomb? Then I wondered if the "auto pilot" mechanism may have something to do with it. Maybe you put it in a dive, give the handle a quick yank against the spring and it releases the bomb and automatically gives up elevator. Just a theory.