This is not one of my restorations or "Shelf Queen" cleans - they take a long time.

It is the same process but "perfection" takes over and it always involves fully dismantling the engine (do not do this unless absolutely necessary!) for a "Shelf Queen". When I say a long time - I mean weeks of "on and off", returning to and inspecting followed by rejecting a less than perfect finish.

However, this job was three and a half hours from start to finish. I would say that it approaches 80% of what I would describe as perfect but ........ the next 20% - full scratch removal, blending out any corrosion, removing any ugly casting marks and a full polish .... you would be looking at, probably, five times this - perhaps 20 hours.

So here is the quick and dirty.

The engine came to me - OS 40 LA - as the result of a prang. I knew the history of it but as I now have quite a collection of LAs (and word has got around!), it was given to me along with the front end of the plane.

The plane ( an RC Fun Flyer) was built 18 months ago. The engine had been carefully run in and operated with 10% castor and 10% synthetic oil. However, the flyer/builder was not too particular about fuel proofing and that led to the demise of the plane.

He was very unhappy as it was his pride and joy - rescued his gear and left the front end in his garage for 10 months - built another Fun Flyer but this time fuel proofed it and installed a 46 LA.

It was scratched, the castor had gummed it up, bits of the blue paint had come adrift and corrosion had set in beneath the paint in places. Some castor had congealed on the outside of the engine and was rock hard. At first I thought it was epoxy!

Apart from that it looked fine and so I dunked it in my Hoppes/turpentine mixture as I couldn't stand the sight of it and then I promptly forgot about it until I needed to do a quick engine clean today. It has been soaking for around five weeks.

When I pulled it out the paint had bubbled and so that solved what I was going to do to tidy it up! 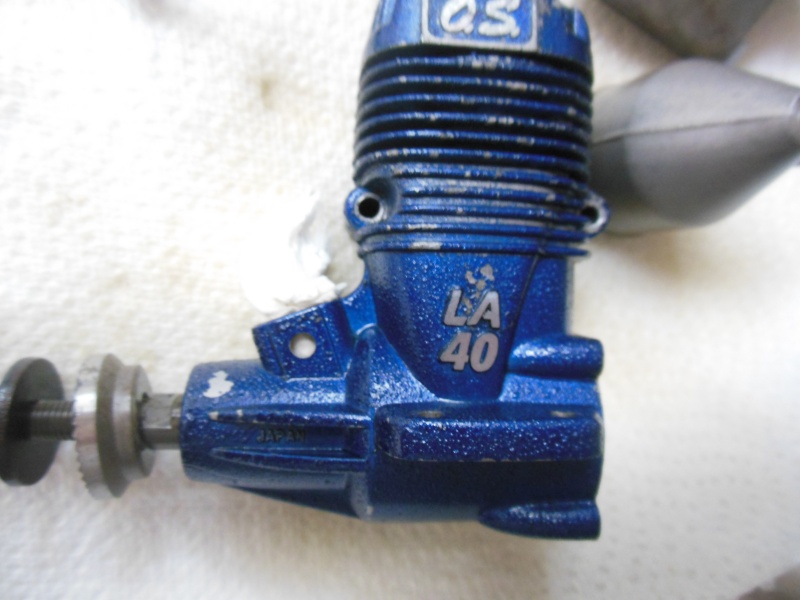 Then I started on the silencer. I normally use Solvol Autosol but I also use Peek (I know this can be found in the USA). Here I use 0000 wire wool and the Peek polish along with a toothbrush (I also trim the handle to fit crevises).

I often find very hard castor varnish that has to be scraped off. It seems like epoxy sometimes but it eventually dissolves in neat Hoppes. 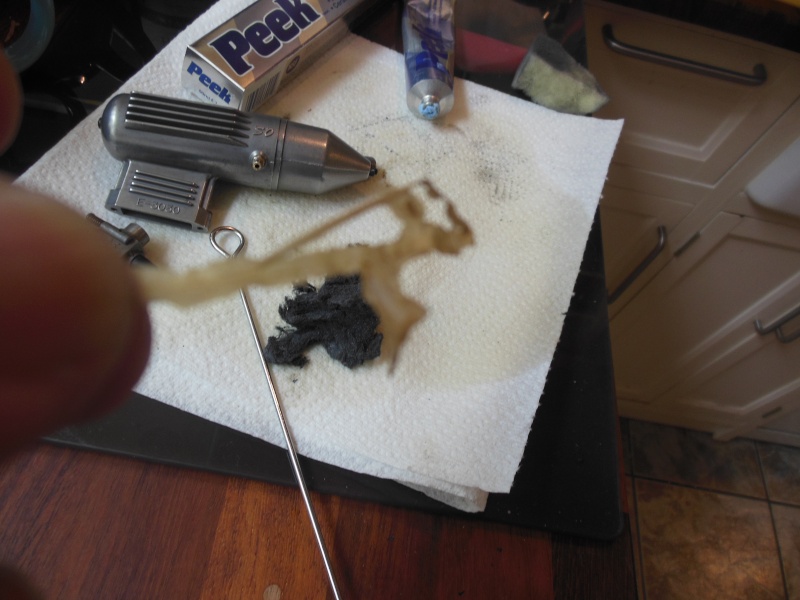 Then for the paint removal. It starts easy. First I block up the exhaust, rear crankcase and the venturi inlet. Then start with my thumbnail. When that has worn down I revert to the toothbrush and wire wool.

Often there are stubborn bits and so I apply paint remover and rework with the brush and wire wool. 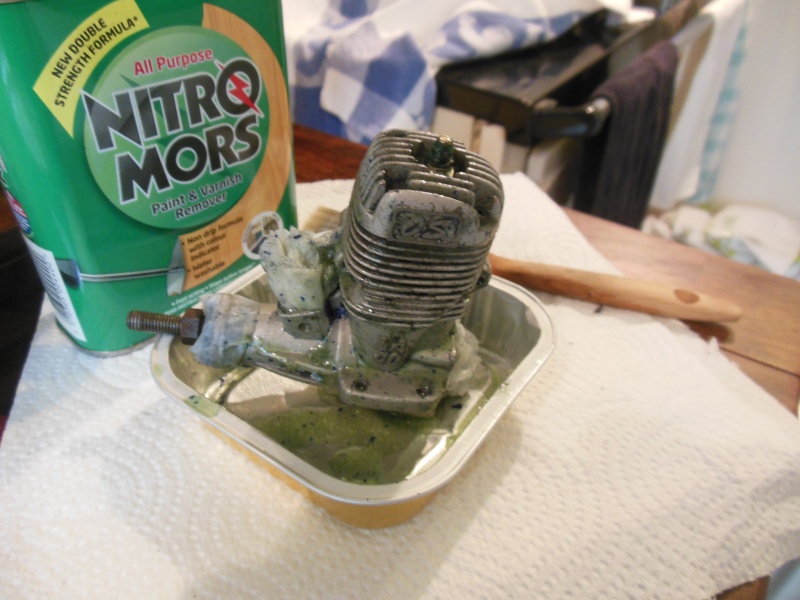 Then it is back to wire wool and Peek polish. I often resort to a brass wire brush. 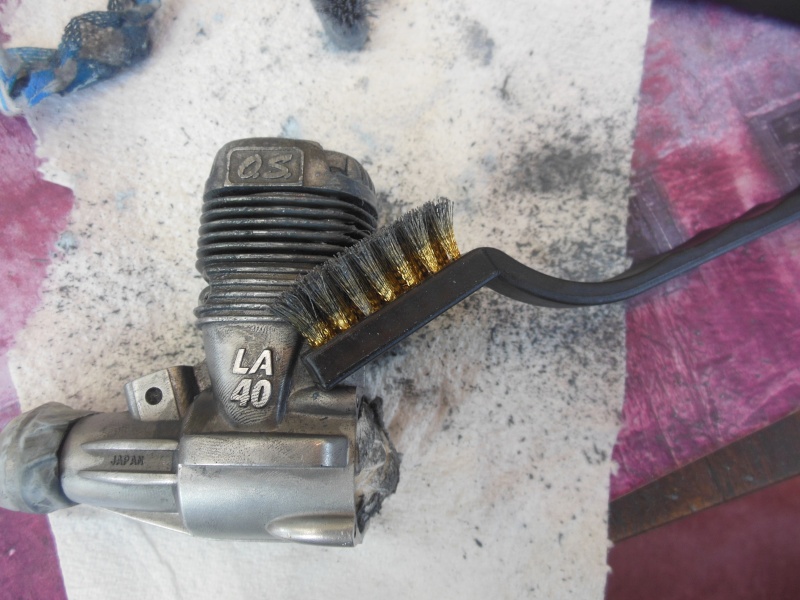 It is important to keep wiping off the polish as it blackens. The polish is slightly abrasive and gets more abrasive as it picks up the surface of the engine.

Then we are finished!

Very nicely done!! That was quite a transformation you performed -- from ugly duckling to a swan. I never cared for the blue LA's and always tried to stay with the silver version.

Great job Ian, I think you got a good thing going on there. 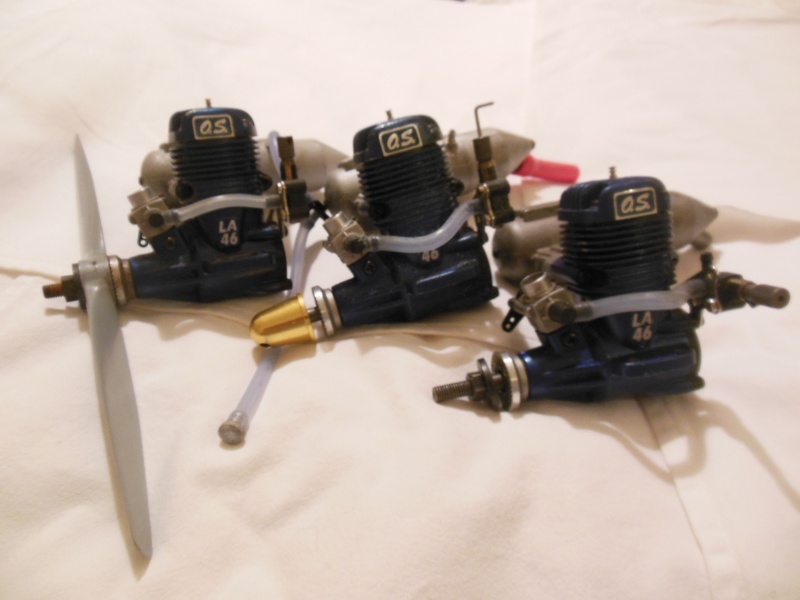 That should keep me busy on a rainy day and we have a lot of those here.

(the bare metal does look much better though)
Phil