I was intrigued by the topic started by our younger member and all the comments posted. There was a consensus about CNC production and the economics of production.

This seems to be an odd way to start a topic but I was one of the parties perhaps contra new engine production. Then I thought, there are still manufacturers out there and entrepreneurs producing engines and some expanding the range.

RedFin engines, proprietor Alex Phin, is a prime example. He has been on the go for a few years now and his range has changed, increased and improved.

The concept was simple - a CAD drawing that can be increased and decreased to produce a variety of sizes of engine. I hadn't realised this until I saw the perspective views highlighted in the topic above.

So I have dug out my little collection. (Naturally they are all diesels!)

All produced from the same design for CNC and are very popular engines. They are all individually numbered.

Now so far, you can see a progression. A CAD design that can be resized to produce a range of engines from 030 through 090.

All the engines pictured in the previous post are golden oldie side port diesels a la "Mills" - hence the term "Millish" - the right to use Mills was bought by Aurora.

A strange market to reach out to or create? Not really.

There has been a resurgence  here in the UK in Vintage - Free flight, RC assist and control line. I am not sure which came first - the demand for suitable engines or the availability.

Now there is a supply of new engines with a full spares backup. They are ideal to learn with or resurrect old memories. Kits are being produced to suit - there is even competition in the kit market.

Jose's recent video (I am still in awe of his production) emphasises this.

We have modellers who are not interested in sky jigging, having the latest and greatest, the fastest, the most expensive, the plasticky foamy ready to fly (I am one of these!!) but have gone back to modelling and relaxed flying.

There is room for new engines but they have to be geared to the market (or create one!)

These engines are ideal for beginners and easy to start but it doesn't stop there.

Once a design is successful and multiples can be produced and sold - why not introduce changes. This is exactly what Cox did.

With a flexible design - small changes can produce a different engine.

Here RedFin modified the 049 to produce a Reed Valve version. The reed is a Cox part!

How hard can it be?

Why stop there? Use the same parts and replace the utilitarian crankcase with a very nicely cast one.

While you are at it - throw in a couple of ball races and turn it into a TBR.

This is the 030 - Millich. Now, I believe, produced in the Ukraine.

Now we are going really retro! (and smaller)

Now for even smaller and another design modification. Notice I say modification - these are derived from CAD drawings and CNC produced.

Here we go with another another Millich. This time front rotary as well as TBR.

As they are my current favourite (I am fickle!). Here is the two of them together.

Take a popular "Golden Oldie" and clone it. It may not have the same performance as the originals or the custom built versions but it looks the part.

and the RedFin Oliver Tiger

These have sold really well even though they have been available elsewhere for some time.

The ideal candidate for a Cox resurrection is the Space Hopper. 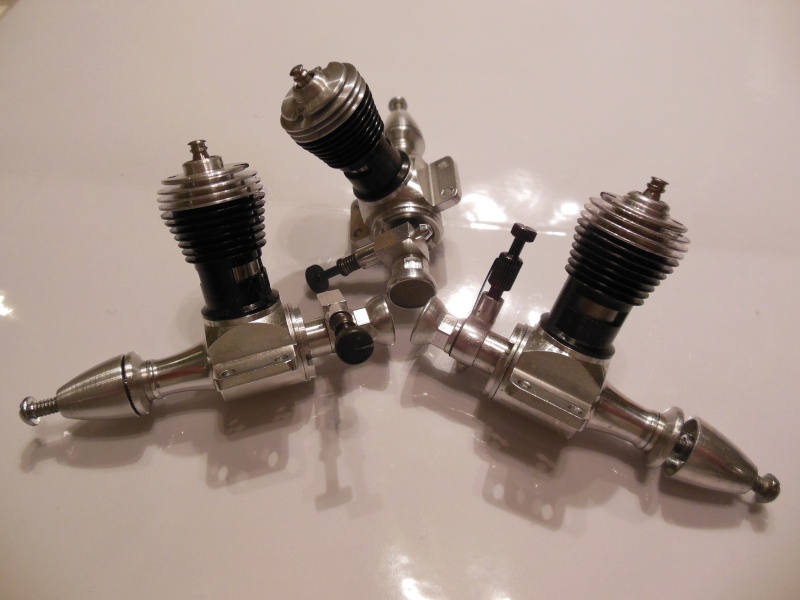 Like the RedFin engines it can be scaled up and down. At 049 size there are already plenty of cylinders, pistons and glow heads available to make a relatively cheap start up.

Resizing will present issues (heads, pistons and cylinders) but it can and has already been dieselised courtesy of Ronald Valentine. 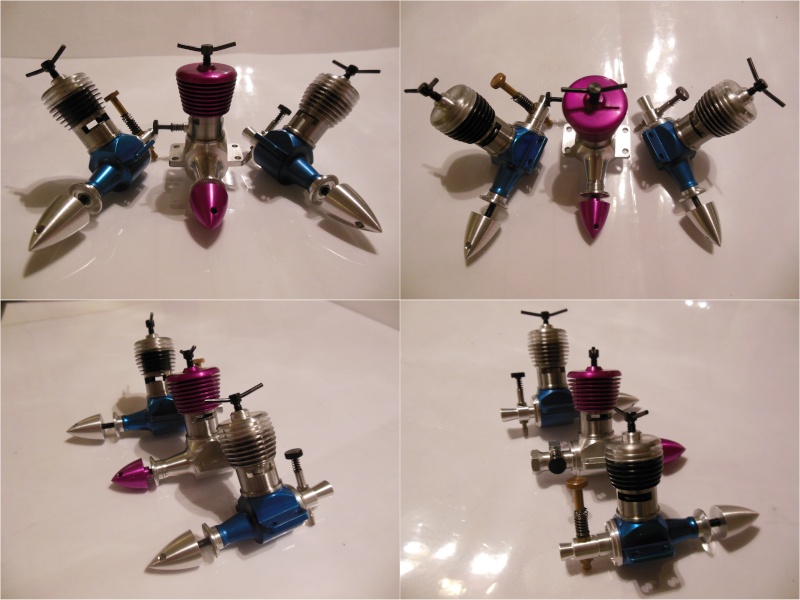 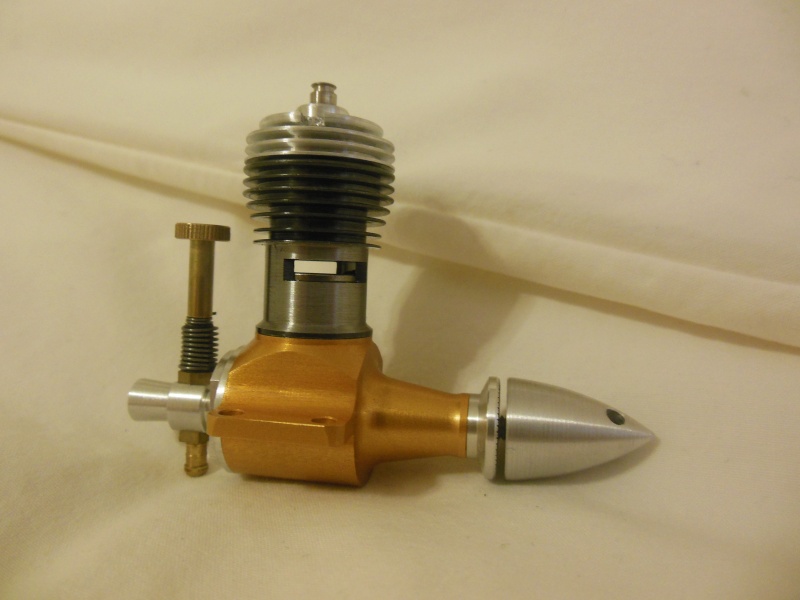 The question is "Would there be a market for it?"

The dieselised Cox Space Hopper out performs the RedFin 049 but to the majority of British modellers find that unimportant. Match the model to the engine.

Until now, I have seen the market for IC engines dwindle but the introduction of these new retro engines has reawakened the market.

I see Profi, Fori and Stalker engines are still being produced. PAW engines remain popular (and have a high second hand value) and having full access to spares is extremely important.

Most older mint engines are in the hands of collectors but the lack of spares is the biggest show stopper for the regular flyer. Bust a conrod or a crankshaft and "goodnight vienna" - a very expensive result. Even the simplest and most common NVA break is more than problematic.

This site has about 2000 registered users. There are a lot more regular but unregistered users watching the site but this is a worldwide audience. Start narrowing that down and the market for engines becomes ever limited - especially when Cox engines were mass produced and there are millions of Bees around.

That said, if I look at the numbers stamped on the side of the RedFin engines and assume that they are sold sequentially - it is now into the thousands!

(British slang) Events have reached a state of completion; nothing more can be done.
If the ship takes on any more water, it’ll be goodnight Vienna for us all.
So I met the girl, we had a few drinks. Back to her place, and Good Night, Vienna.

Very Nice Ian! I notice a variety of different drive-washer configurations on the RedFins. I'm often drawn to this area of an engine on initial examination. Some have bosses.. some have grooves.. Are the hex-style milled from hex bar perhaps? Maybe this is a better (or more economical) method of machining the blanks? I've seen lathes that feed bar through the spindle for producing multiple parts. I imagine that the round drive-plates are produced in the same way.. but there must be an advantage to having the hex shape. Does it provide for better fixturing for the remaining machining operations?

Do you suppose that Cox switched to a hex later-on, for economical reasons? I wonder if the newer cam-style starter spring influenced the change.. or whether the starter had to be redesigned to suit the hex drive-plate? Whichever; it must have involved a cost-savings.. but required a different spring-coil forming.. and the addition of the molded plastic cam. I like the design actually.. even though it induces a little drag. It certainly helps for starting an engine that's inside a cowl.

It would seem that the drive-plate could have as many if not more machining operations than any other single part in the engine. Depending on it's design, it could need splining, tapering, grooving/turning, radiusing, facing.. and obviously boring.

Your engine collection never ceases to amaze me Ian!

Regarding the hex drive plate, I always thought it had that shape to make it possible to use a wrench to hold the crankshaft still while removing a prop stud. I've seen many round ones with plier marks. Another reason of course would be the grey "non-no-drag" starter spring cam. The red one with the round hole is not the best possible design.

Most likely the hex drive plates were made of hex billet, never thought of that but that would be the way.

BTW, here's a tip on how to gently hold the crank still to get a stud or remains of a snapped screw loose without using pliers on the prop plate. All you need is a length of fuel hose 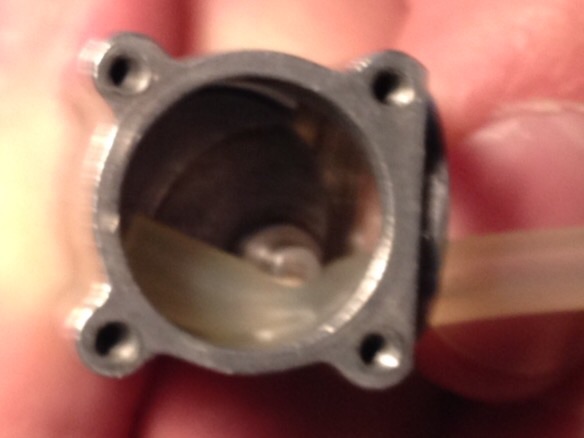 (Sorry about the off-topic)

The Hex spinners are made from Hex bar stock. The only reason is so that a spanner can be used and it is one up from a nut. The only trouble is that a well used engine will show spanner marks and the adonising will suffer.

A wrench in the UK is a spanner.

A Manchester Spanner is a hammer!

An allen wrech is a hex key or allen key.

One day - we will all communicate in English

Ooooh my God !!! Dear Ian, you´ve many many Redfin engines, Alex Phin was very happy with you.

And of course the model engine is used at reduction scale Vic Smeed´s model called Madcap.

The engine sounds like a cello, as you say are fantastic and relaxed flights.

I really like your videos - I subscribed to your You Tube channel and I can now watch them full screen on my TV.

Thank you very much Ian, it is an alternative way to be here with me flying.

Today is a great flying day with Madcap Redfin 030 powered. Fly so funny ... I enjoy too much. I like it.
I am a western cowboy. 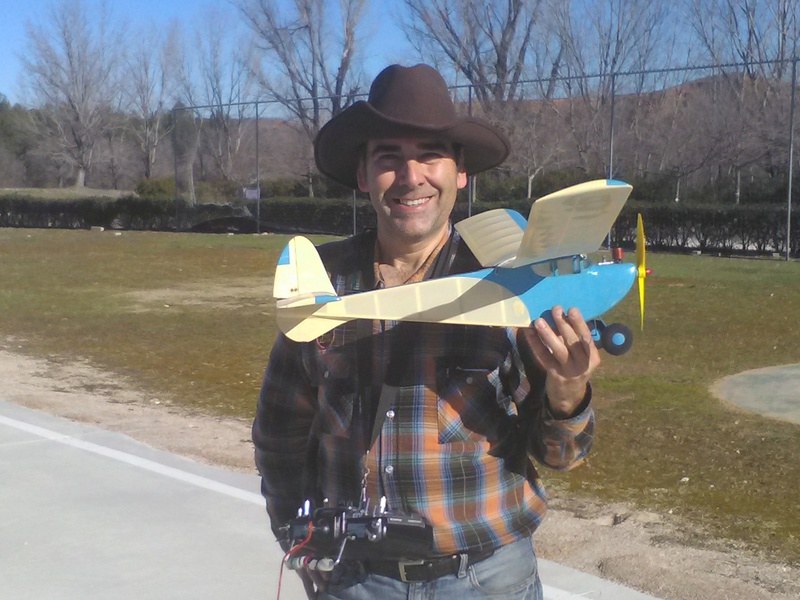