attempting to start the fox engine

attempting to start the fox engine

also what orientation is the fuel tank supposed to be in, I really have no clue! 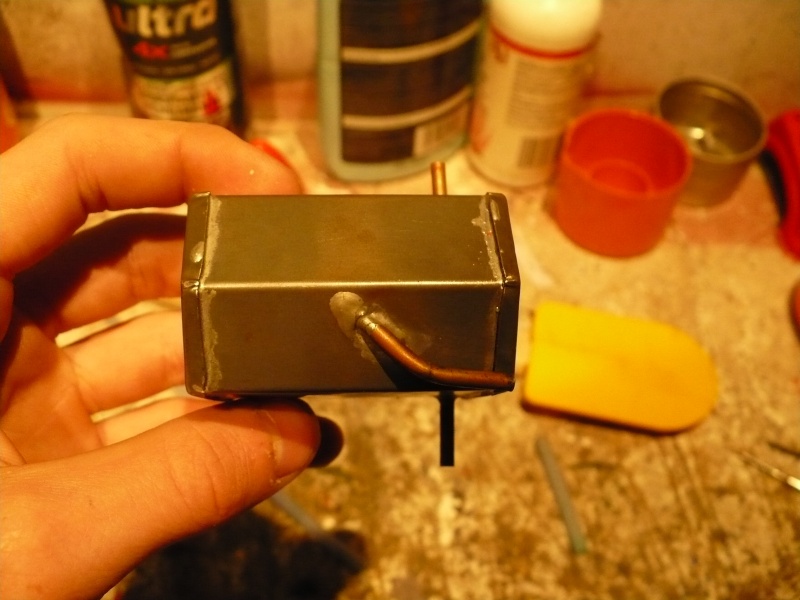 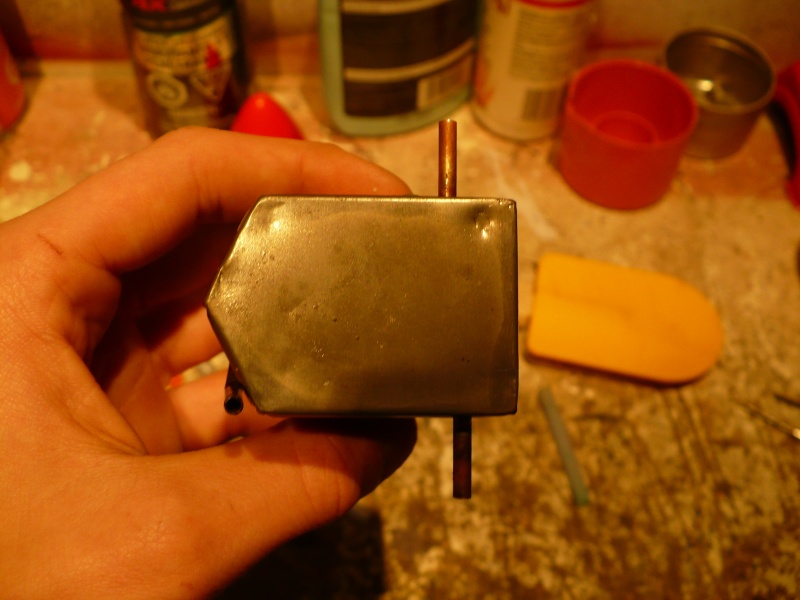 Attached is an article I copied quite some time ago from a website which now no longer exists.  I have an early 70s Fox .40 R/C with this sort of carb & I suspect yours might be the same.  I've never made a real attempt to run the engine other than short bursts on a prime.  I'm not sure that the writer's final recommendation is relevant here as this engine appears to have a glued in carb the same as my .40.  As I said, I have no experience with this adjustment, but when reading it carefully it makes perfect sense.

In answer to you query about the tank, in an aircraft the tank is mounted with the triangular section pointing to the right side of the plane (from the pilot's view).  You're holding it the correct way in the pictures.  Top pipe is for filling, bottom pipe is for overflow/vent and the one pointing forward obviously goes to the carb.  The tank won't empty fully in this position when bench running.  It's designed for centrifugal force to throw the fuel to the rear outer corner of the triangular part when flying in circles on a control line model.  To use the entire tank for testing you can mount the tank triangular side down.
Good luck with it, and whatever you do, keep your fingers out of the way.

"Not to be confused with modern two-"needle" (TN) carburetors, these two-"jet" designs appeared on the earliest Fox RC engines. It is important to note that these carburetors DO NOT operate the same as the TN carburetors most of us are familiar with today. Although seldom encountered now days, these early carburetors were so unique and innovative in design we feel they are still worthy of discussion.

While other manufacturers were still offering only simple air-bleed types, Fox was manufacturing more advanced fuel metered carburetors. Referred to as "two-jet" carburetors, they were actually more sophisticated than many of today's current designs. Unfortunately, they were also more difficult to operate and proved too much for many modelers. (Especially those who did not read the instructions!) Properly adjusted, however, they were capable of performance superior to the simple air-bleed types.

Even today, carburetors used on model engines are typically of the single-jet type. The jet is the small hole through which fuel enters the carburetor venturi. (Most modelers refer to it as the spray-bar). The amount of fuel flowing through the jet is adjusted by a needle valve to achieve the correct fuel/air mixture. Early Fox carburetors, however, employed two jets, each with its own needle valve. One was intended to adjust the idle mixture, the other to adjust the high-speed mixture. As the throttle valve was closed, the fuel flow from the high-speed jet was also gradually reduced to provide proper metering through the midrange as well. This was accomplished by either a tapered slot in the throttle barrel, or a protrusion in the carburetor casting that covered the jet as the throttle was closed (depending upon the carburetor model). The low and high-speed needle valves did not operate exclusively from one another however, which resulted in significant interaction between adjustments. Understanding this interaction was the key to successful operation.

It was important to understand that fuel always flowed through the "idle" jet, whether at full throttle or idle! Unlike the high-speed jet, fuel flow from the idle jet was not reduced as the throttle valve was closed. With the throttle almost fully closed, the high-speed jet was completely restricted, leaving only the idle needle valve in complete control of the fuel mixture. As the throttle was increased, more and more fuel gradually entered through the high speed jet as well, and the total flow became the "sum" of the high and low-speed jets. If the correct adjustment sequence was not followed, success would be unlikely.

When operating the familiar air-bleed carburetor it was common practice to adjust the high-speed needle first, then fine tune the idle mixture with the air-bleed screw. Attempting to apply this procedure to an early two-jet Fox carburetor would not be successful, yet many tried, and then blamed the carburetor! Although the correct procedure was essentially the exact opposite to the one familiar to most modelers, even the original Fox instructions did not always make this clear! The following quote from an early Fox .40BB and .45 BB owners manual is typical:

Unfortunately, the importance of adjusting the low-speed mixture first (then leaving it alone) was not stressed and, while decreasing the speed 500RPM from maximum may have been correct, most modelers would not have had a tachometer. Determining this by ear was not too likely either. Besides, adjusting the idle needle with the engine running could be dangerous because of the close proximity of the propeller and hot muffler. It would have also been helpful to include some method of pre-setting the needle valves to a good starting point for those times when things got really messed up.

Many early Fox engines have been collecting dust for years simply because their owners could not operate the "strange" carburetor. Admittedly, even knowing the correct procedure, it still took a real feel for model engines to achieve a good setting. Furthermore, the precision with which these old carburetors were made was not always the best making it even more difficult, and sometimes impossible, to achieve a really good setting. Fortunately, many older Fox engines will accept the current, more conventional, carburetor versions without modification. We strongly recommend doing this to vastly improve reliability and user friendliness.

Since new Fox carburetors are very reasonably priced, updating an older engine is still economically viable. Early .40 and .45 schnuerle versions were powerful even by today's standards, and engines such as the .19 and .25 bushing or Eagle I .60 would still make great sport engines. The old .78 would serve well in a larger scale project. By simply updating the carburetor, these early engines can be put back into service with very pleasing results."

Oh, by the way. Try fully screwing both needles gently in, then screw them out about 2 to 2½ turns. Hopefully this can give you a starting point, but I'm sure there are others who can give you a more accurate initial setting, but every engine varies.

Orientation of the tank is just how your holding it in the picture. The tank is a control line tank. If that tank was to be mounted, it would be attached to a profile bodied plane on the outboard side. Those tanks are a fav of mine due to their shape and the way the pickup exits the tank. With the pickup directed to the bottom, it allows a straighter shot to the spraybar not to mention shorter. I say this all the time to those who want to fly using hard metal tanks is to put a piece of ply epoxied onto the front side of the tank. Can you see the dent on your tank in the upper corner? This is due to a crash and the tank slides forward and the muffler attachment screw bends the tank usually punching a hole through it. I would consider checking that tank for leaks. ANY pinhole leak will cause a major problem with fuel draw. To check for a leak you need a minimum of 5 oz syringe pressurizing the tank underwater. Shots like that to the tank distorts the end caps, the back seam not to mention breaks the solder joint where the pickup is soldered inside the tank. 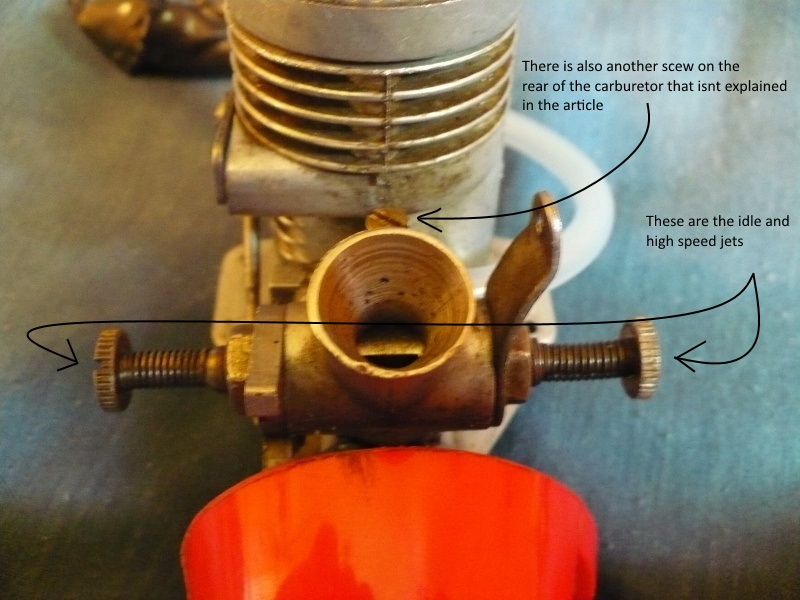 Well I got it running but it scared the life out of me when 3 of the 4 mounting screws where shaken off!
I don't know what would have happened if it didn't run out of fuel!

Defiantly should've double checked that and not trusted the person who built it!

Glad you got it running that little two jet is not easy to work with. It sounds like it started up real rich and was clearing the fuel built up in the case. That little screw in the back is if I recall correctly (Been 20 years) the idle mixture btw along with mid range exhaust side and high speed bypass side. (Bandit)

I would think the high speed mixture screw should be the one on the same side as the fuel inlet. The small screw at the rear will be the idle speed screw, not mixture. It will set the throttle barrel position.

In answer to your statement "I don't know what would have happened if it didn't run out of fuel!", I experienced a similar problem, only mine didn't run out of fuel, left the mount, peaked out its revs due to going lean as the fuel line pulled off and flew across my shed so fast I didn't see it, slamming into the wall and shattering the prop into 100 pieces. Always stand behind!! 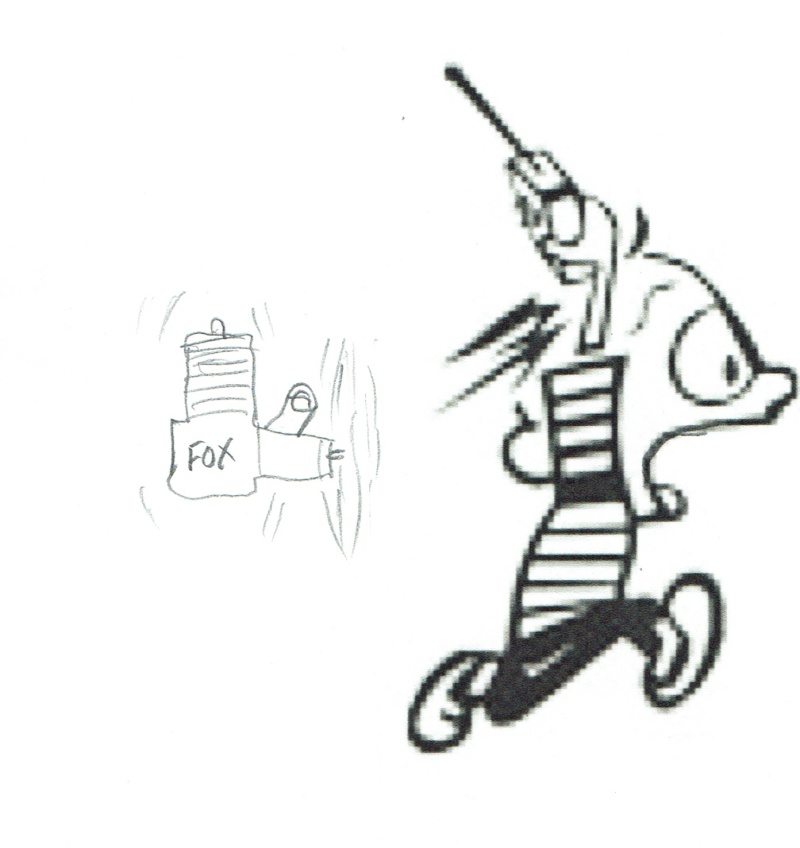