After watching Bob's Mossie build for more than a week, I have been dying to jump 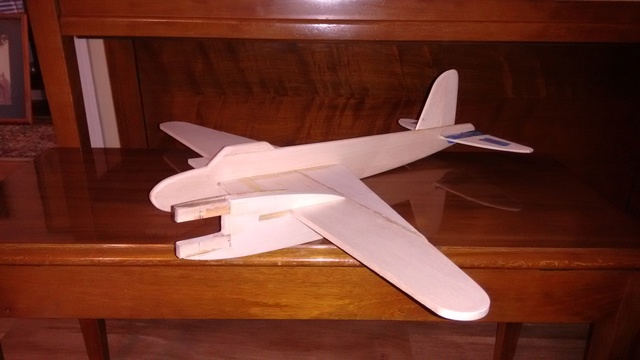 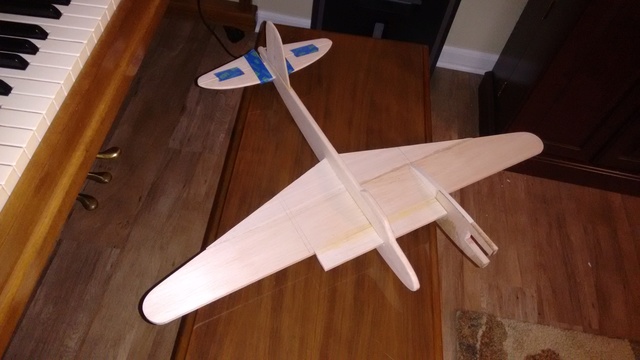 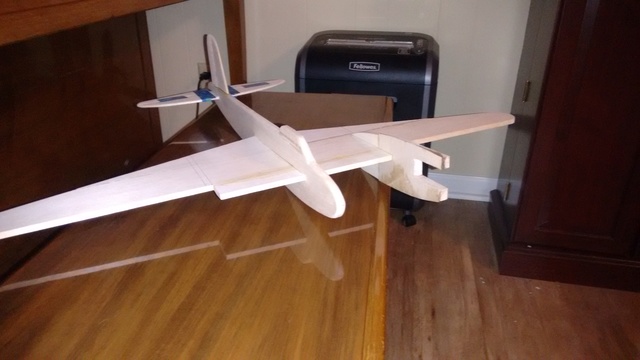 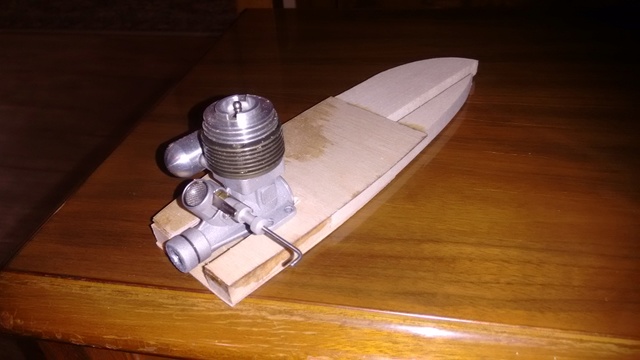 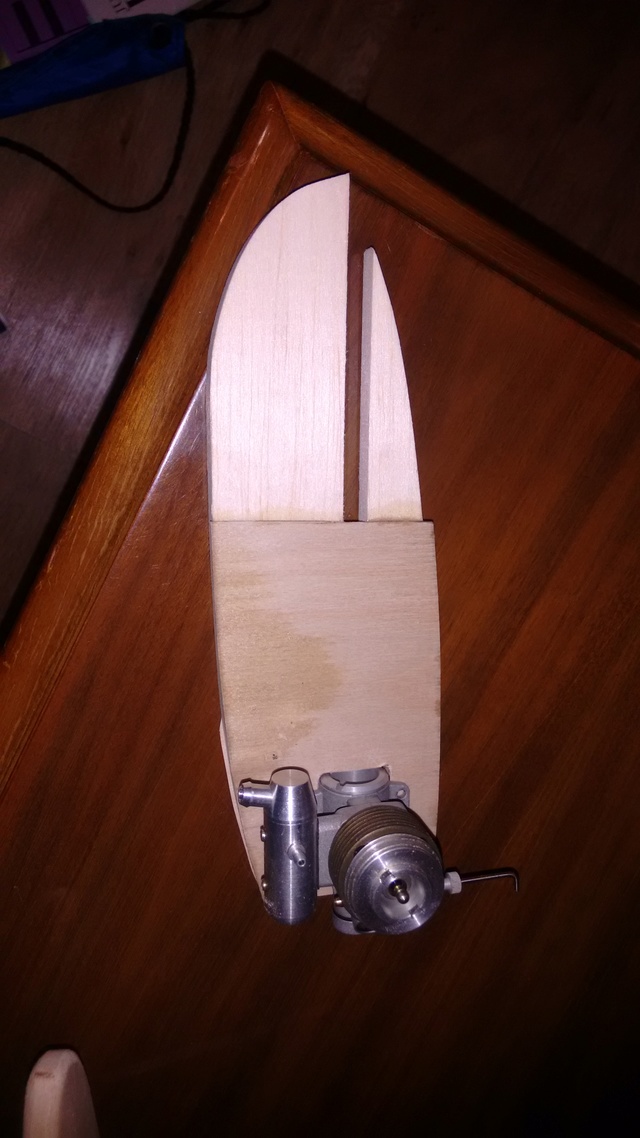 into a 10 month old started-but-stalled kit.

Way to go Jim, I'm looking forward to reading all about it. Learn from my mistakes, which were many.

There is almost 1/2" between the engines and the leading edge of the wing. I think CG is a little far forward, so I may slide the nacelles back 1/4".
1/2oz fuel tanks on top of the wing, potentially with muffler pressure. 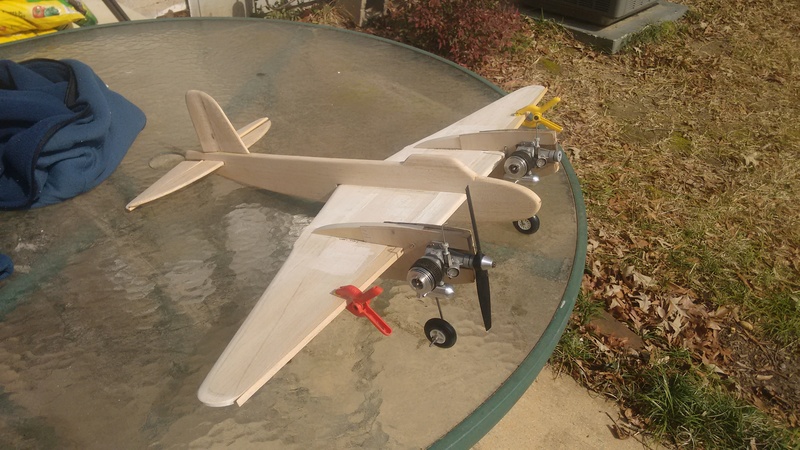 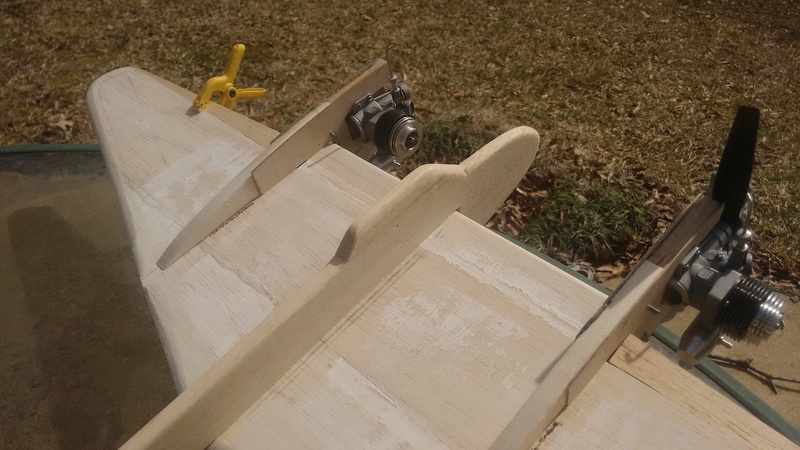 Hey, Thats looking good , Is that 2 norvel .074's on that thing ? If it is that badboy's gunna ge going supersonic.Have fun

This kit really dwarfs my 18" Typhoon!

Looking good Jim. Yes, lot's of wing area on the Mosquito. Early progress made, time takers are yet to come.

I do like the way you took the hard edges off the canopy and forward fuselage. Both of my nacelles were broken in half when received, looks like yours were intact. I like the aggressive way that you re-enforced them, did they come in the kit? Mine were rather dinky.

Got a paint scheme in mind?

Both nacelles were fine when I got them.

The kit supplied plywood IS kind of small. I purchased a large sheet so I could reinforce the nacelles on both sides.
Note the port side inboard joint between the nacelle and the wing. Roughly from middle of wing chord to 3/4 way back the the trailing edge...You can barely make out a slot for plywood to tie the top/bottom of the nacelle through the wing. This slot is in both wings/nacelles.

I noted the landing gear upper mount is supposed to be through the upper engine bearers. My engine bearers are 1/2" shorter than the plans shows. I wonder if the stress of engine and L/G mount are what has caused nacelle failure in flight. That top L/G may start tearing the plywood/balsa, so I may have to watch that closely...It screams for a sliding spring-loaded mount!

One of my wife's nylons is being pressed into service as patch material for all fuse, rudder, nacelle joints. Each strip will be about 1" wide, and the length of the joint.

I put 7" two-blade props on it to check for clearance. The fuselage is not hard-mounyed yet. It will be slid off-center in order to center it between the props, not the nacelles. I'm hoping the  props will slow the engines down a bit for maiden flight. However, I have a stack of props from 3-blade to 2-blade in wood, nylon, plastic from 7x4 down to 5x3. Somewhere between will be the happy combination!
This model screams for big spinners. Dubro 1-1/2" should look good on it.

Paint will be darker camouflage based on what colors I have mixed on hand. 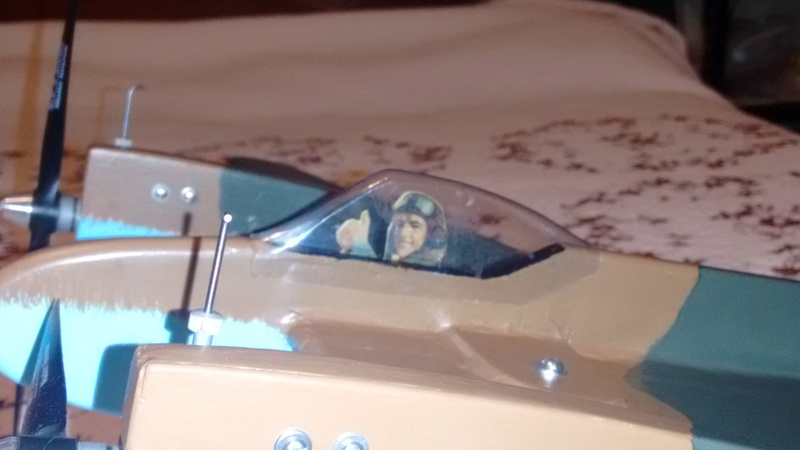 One of the guys at work challenged me to fit a pilot. I found a job of a WWII poster and copied the pilot with his arm held thumb's-up. A little picture tweaking got a mirror I.age for the right side view. It's almost creepy the way the eyes follow, like Mona Lisa! His head and hand are glued to heavy cardstock and glued into a slot in the cockpit.

Fule tanks and controls remain to be installed. I believe I'm going inboard/topside with the tanks in order to keep the pickup tubes away from the cylinder heads. Otherwise I'd need to move the tanks rearward. This also provides the shortest distance from the pickup tube ends to the NVAs. Going bottom side outs the port tank right in the way of the forward lead-out. 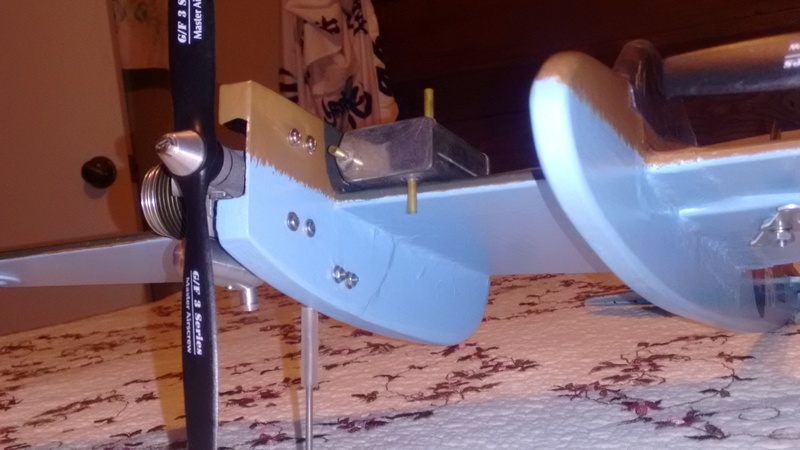 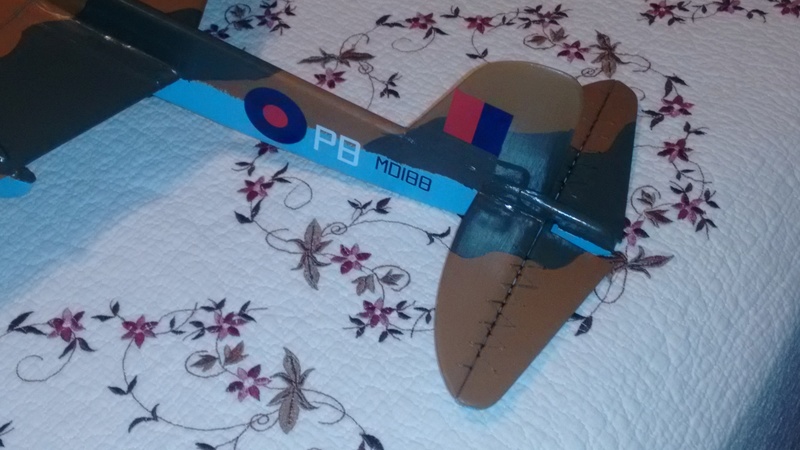 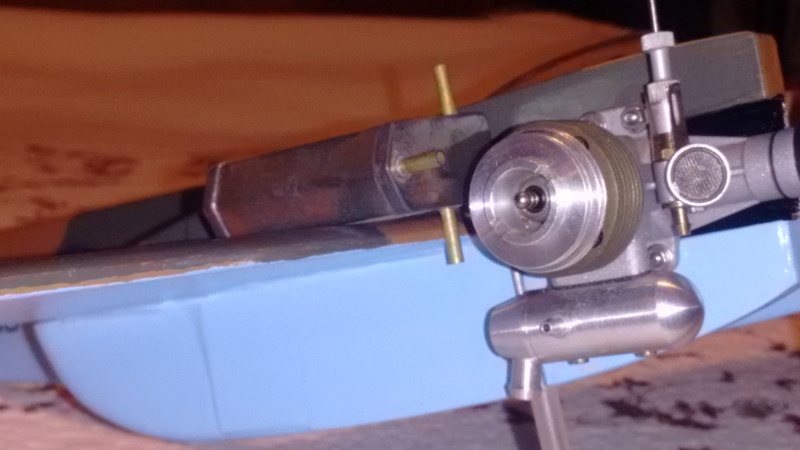 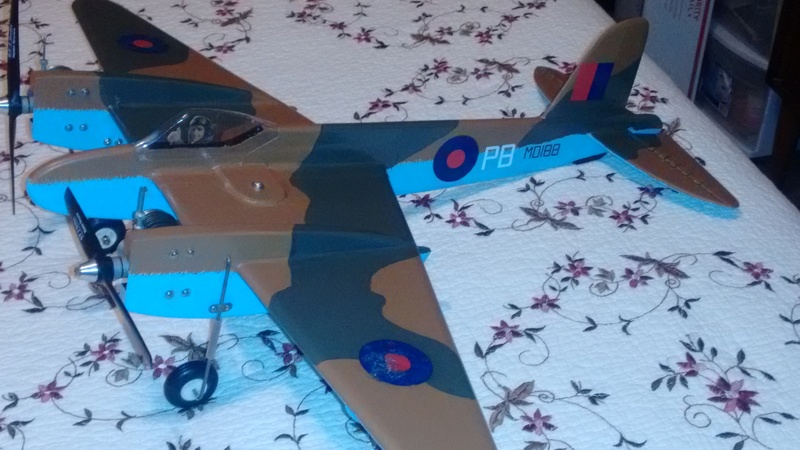 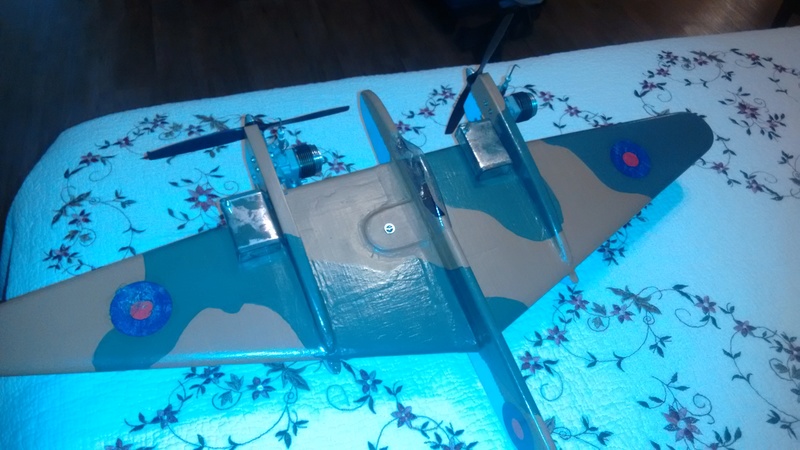 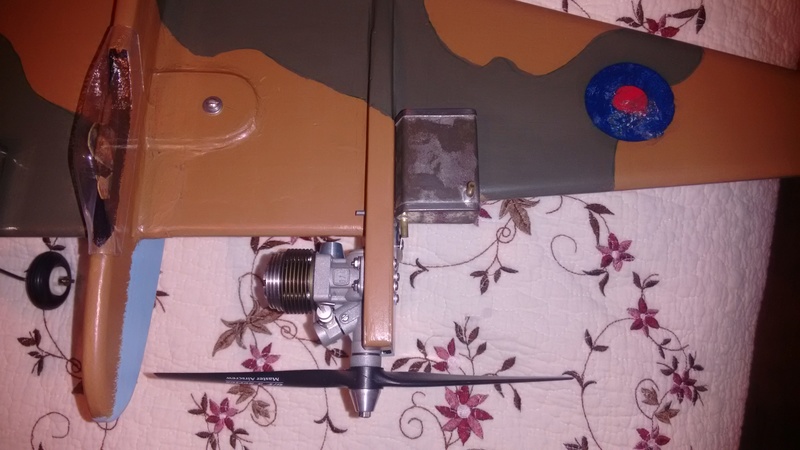 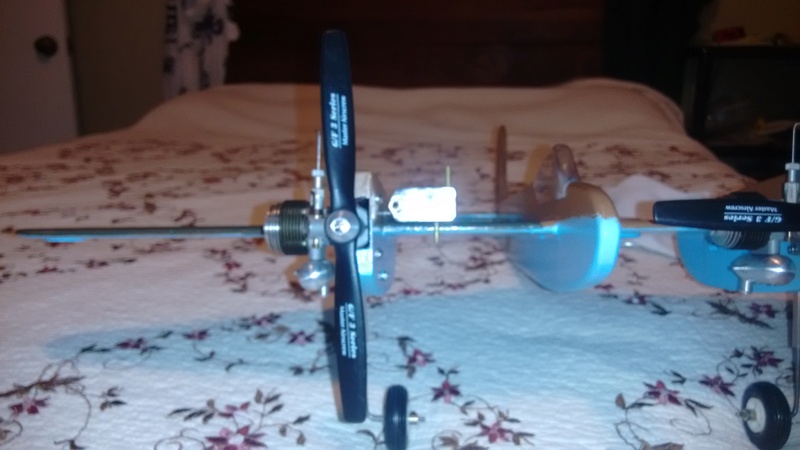 Fantastic job Jim, I especially like the more scale like sky-blue underbelly and the clear cockpit with pilot. Awaiting a flight report.

It's been 14 months since I finished this one...except for fuel.
I did top mount a pair of tanks. The engines kept flooding out. The plane never had both engines running at once.

So after much procrastination, I present my second fuel system: 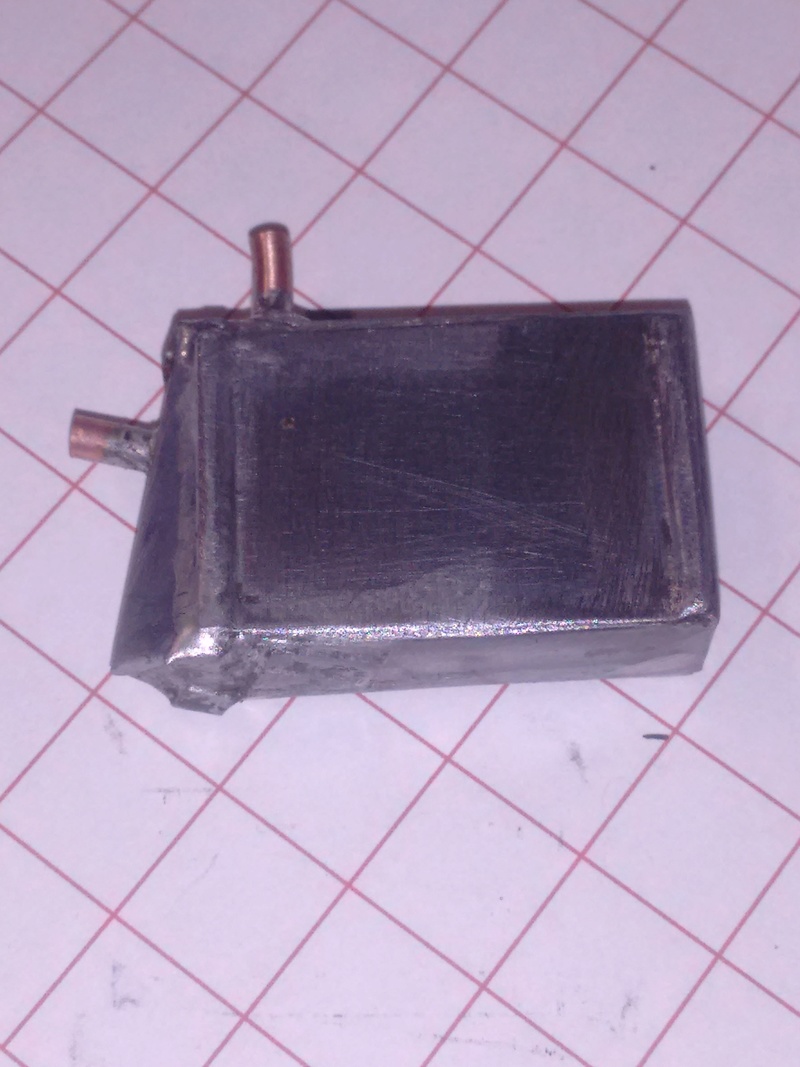 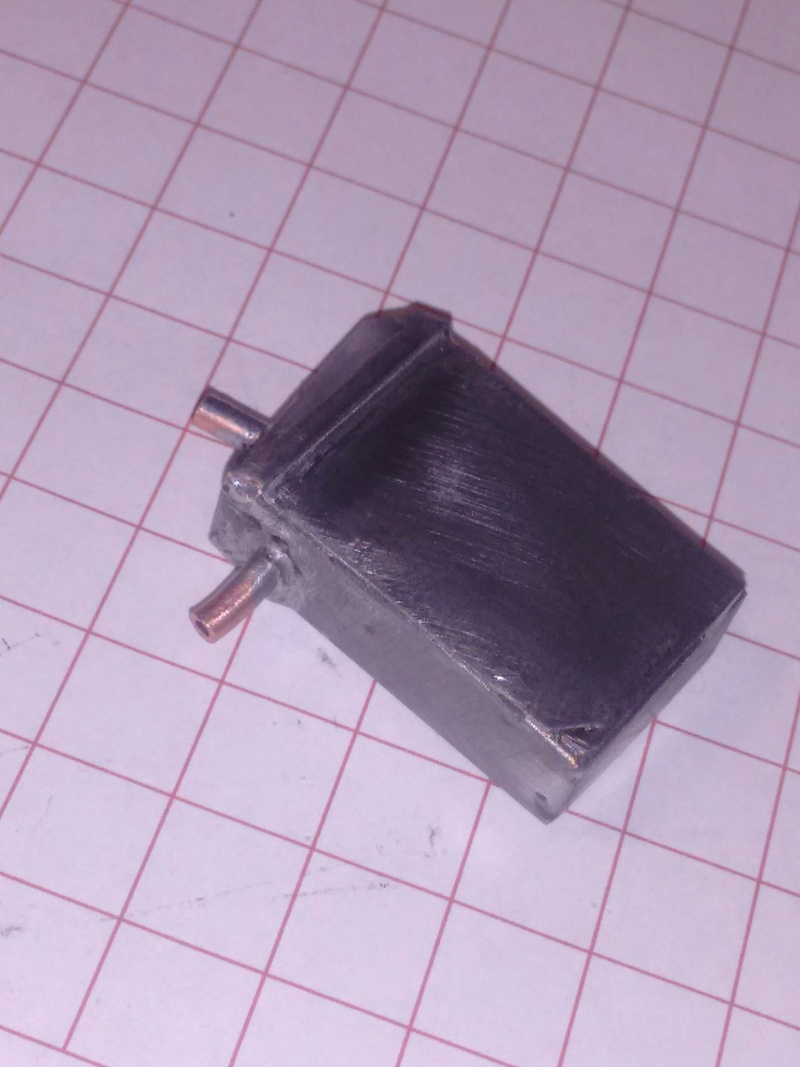 Bench run was 1.25 minutes. I may have to make a slightly deeper tank. 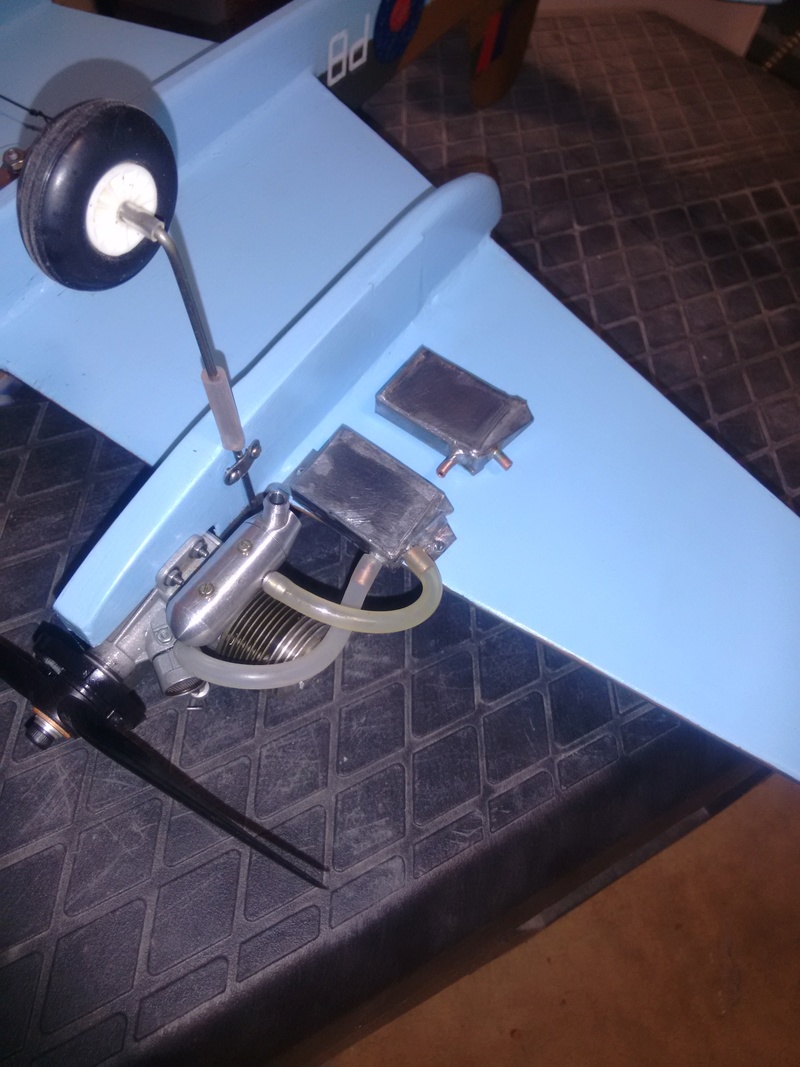 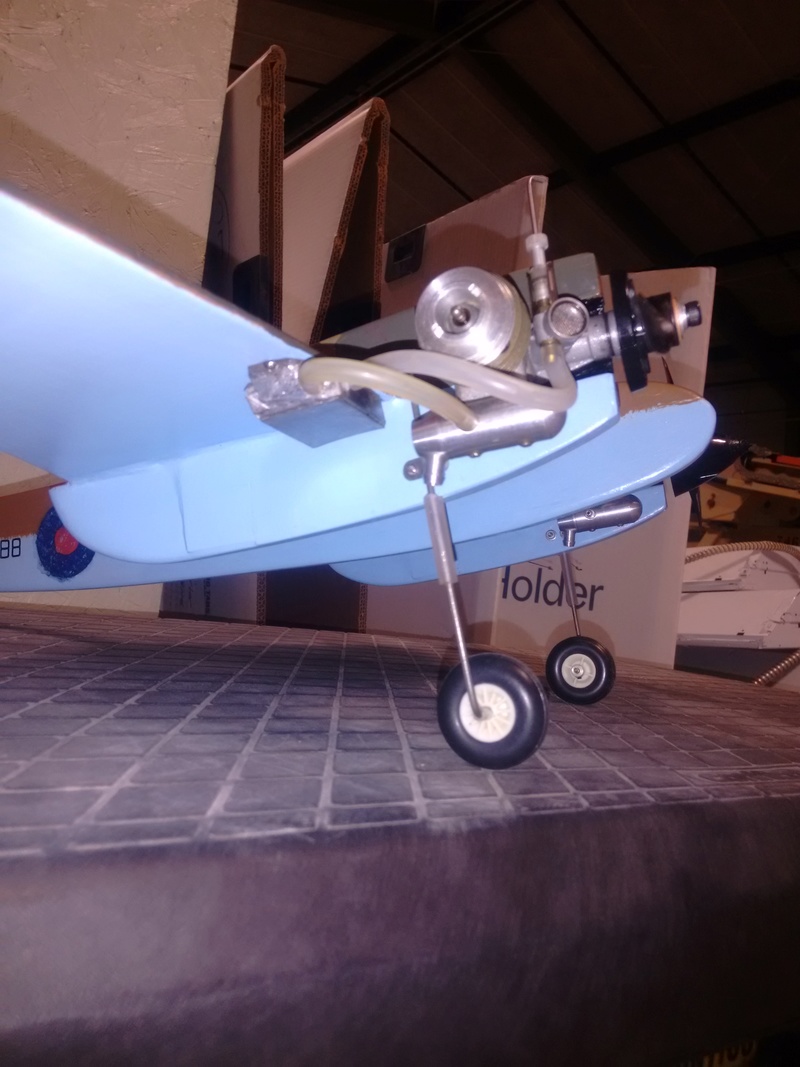 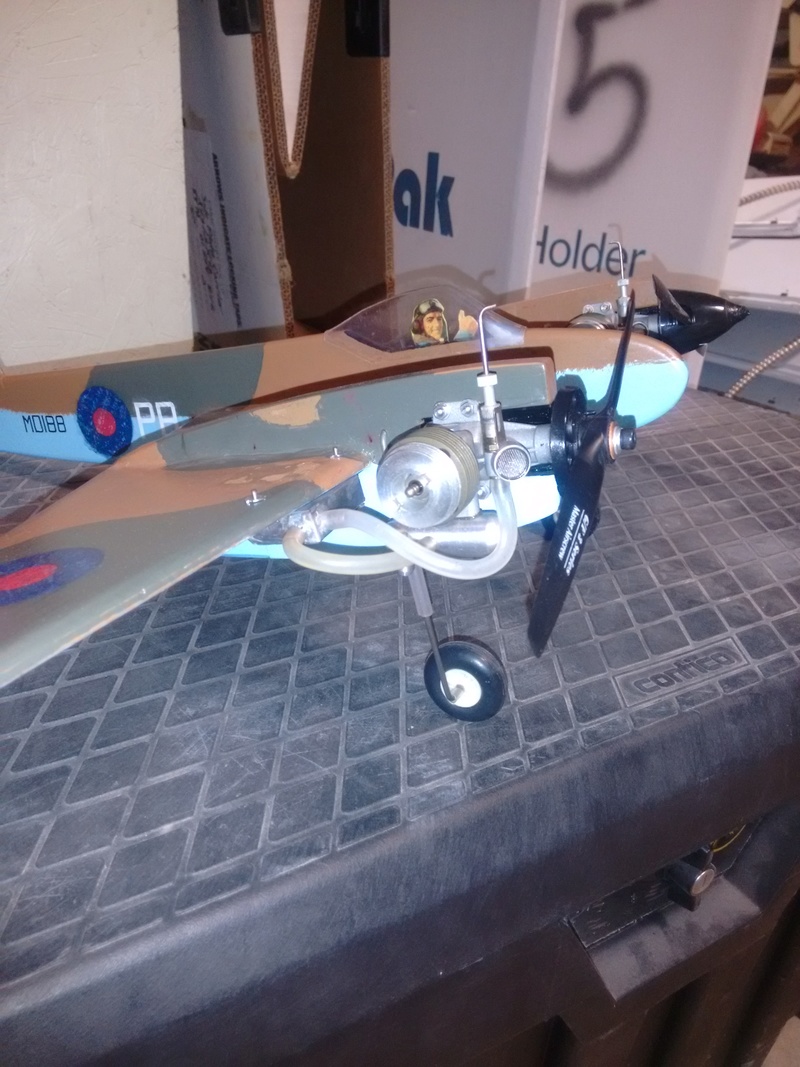 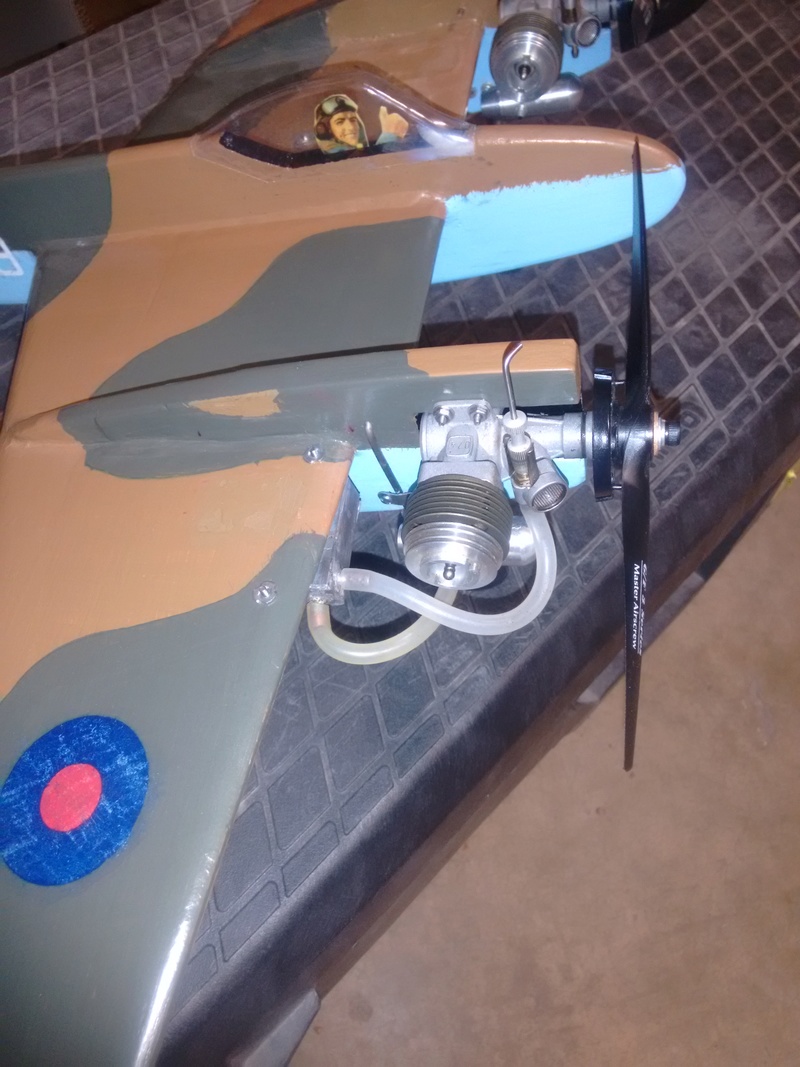 Carly Simon says procrastination is making me wait....I paraphrase... Long time Jim. But, mine has yet to see air time either so no stand-off criticism here.

One minute twenty five bench time is more than enough time to make me dizzy air time, but you should get more seconds when it's airborne.

I like your plumbing. Pressure off the mufflers works great but maybe not a possibility with my Enyas. roddie uses tubing clamps over the ends, looks nice and adds a finishing touch.

I figured you may jump in. Tank your guy and let's get them in the air! If we video the flights, then there will be three BHM Mosquitoes on YouTube. Mike Londke's Mossie is getting lonely!

I enjoyed your link. Seeing one in detail makes me want to jump back in to the Brown/Novotnik model. I had the kit cut a while back. The dimensions were translated a little off, so the kit appears to be roughly 90% of original. I have a pair of .020 Tee Dees for it IF the BHM flies well. Tanking the little one will be a little different. Watch for a different thread.

For Bob...I recognize your ZS 1.5 carbs in one of your other threads. Are you on British Car Forum?

I love the - Doesn't anyone write in complete sentences and use correct grammar anymore?? thread.

rsv1cox wrote:...I love the - Doesn't anyone write in complete sentences and use correct grammar anymore?? thread.

Not since my fingers locked in a permanent curl hit every key and mouse button including the ones I want. It's why I don't write many stories or replies anymore.

But I love the Skeeter. If I ever get to do another fun-build I want to do a twin. I've never done one before, and yours looks like it would fly anywhere I point it. Great work.
Rusty
_________________
Don't Panic!
...and never Ever think about how good you are at something...
while you're doing it!

rsv1cox wrote:...I love the - Doesn't anyone write in complete sentences and use correct grammar anymore?? thread.

Not since my fingers locked in a permanent curl hit every key and mouse button including the ones I want. It's why I don't write many stories or replies anymore.

But I love the Skeeter. If I ever get to do another fun-build I want to do a twin. I've never done one before, and yours looks like it would fly anywhere I point it. Great work.
Rusty

I neither write in complete sentences or use correct grammar Rusty. I justify my neglect as using "an economy of words".

I share your affliction, only mine is the other extreme, my shaky fingers fly all over the keyboard. I spend a lot of time backtracking correcting mistakes.

I would trust my Mosquito build more to your locked but loaded hands than my flighty ones.

Two steps forward, one step back...and then one more half-step back. Both tanks were checked for available fuel volume at the fuel pickup. They both hold 10 ml, with port side holding a smidge more. The second tank was mounted yesterday.

I finally got to hear two engines running simultaneously. Wow, hearing those two .074s synching/unsynching got me pretty excited!

Trying to start two engines back-to-back will take some learning. It really eats into the short fuel supply, so I may have to make deeper tanks.

Starboard side kept cutting out 20 seconds earlier than port. Fuel checks showed starboard was drained of fuel, as was port. Hmmm!
I found a pinhole leak while carefully watching the starboard tank during fueling. A corner seam had popped while running. Odd since I had checked both tanks under pressure, under water.

Once the tank was fixed, it was remounted.
And then I did the Stupid Ground Crew thing again; plugged the glowplug clip into my starter port.
Pfft! Said the harder-to-get glow plug.
New ones are on order, so the Mossie got pushed back into the hanger.

Mike Londke's Mossie video shows he has a couple of minutes of flying time. His has Norvel .061s. I don't know what size tanks he runs.

Mike, if you read this: What size tanks did you install?

1oz tanks on mine.

Tonight was a successful maiden. Man, this thing flat moves! I flew it on .015"x50' 7-strand. There was a little swag, but not nearly what I've seen on dacron.
I took an old Cisco Flip video camera with a tripod.

After two un-planned for single engine run-ups, a final fuel, start, flight mission time I got just over two minutes.
The camera stopped right about, yeah! I know I flew it, even if you can't tell by the picture: 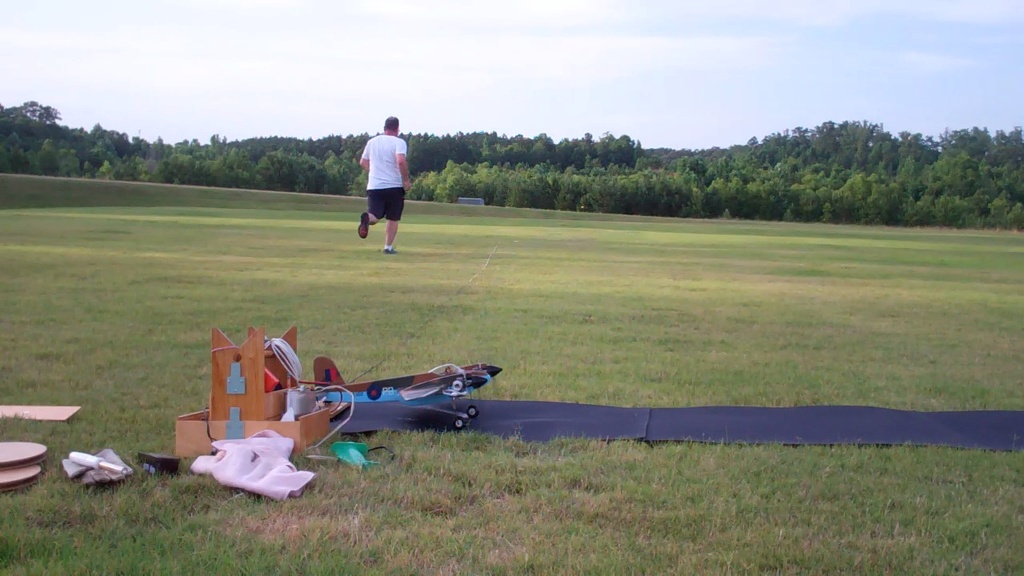 Love the picture, looks like the little guy in the cockpit was scared to death.

That twin sync sound is wonderful.

Yes, I have done the phifft 12V vice 1 1/2V thing too. Darn banana clips fit everything.

The worst part is the camera missed the post-flight victory jig.