I spent some Christmas money!

I spent some Christmas money!

I haven’t bought a firearm in over four years because prices were so ridiculous during the Obama administration, so on the way home I stopped in at a pawn shop.  Every time I’ve stopped in lately the prices at this shop were ridiculous too, but since Trump was elected the price of firearms has been going down, so I decided to see what was available at the pawn shop.  I don’t really need anything else, so I ignored the pistols and high powered stuff.  I just looked at the lever and bolt action .22 rifles.  Only two jumped out at me.  A tube fed J.Stevens listed for $99 and a single shot J.C. Higgins model listed for $89.

I’ve always wanted a Sears brand firearm, and I don’t have a single shot .22, so I took a longer look at the Higgins rifle.  Other than a few dings, the stock is in great shape.  The chrome plating on the trigger, trigger guard, bolt, and cocking T-handle is great.  Almost looks like the parts were recently manufactured.  The takedown screws aren’t even buggered up.  But the barrel…  The bluing is almost all gone, and there’s considerable pitting.  I was afraid to look at the rifling.  But looking down the barrel with a light showed the rifling in exceptionally good condition.  All in all, a decent rifle.  So I told the clerk I’d walk out with it if they made me a good enough deal on it.  They came down to $75, so I figured I’d take it. 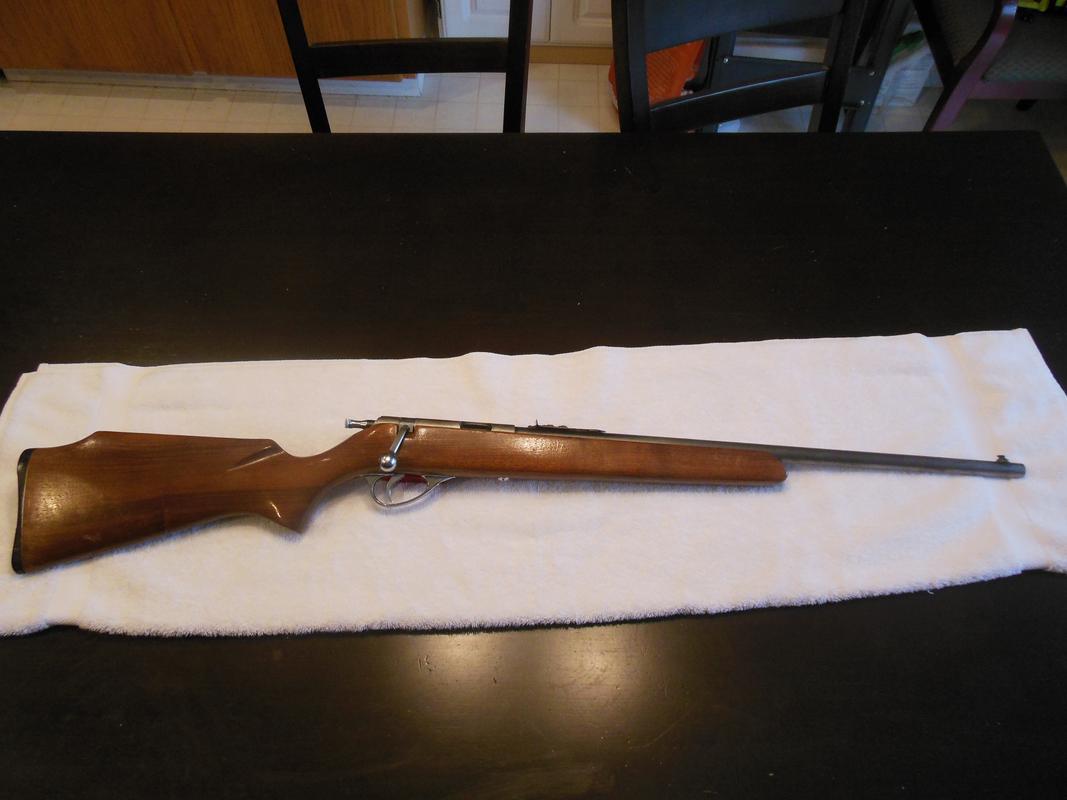 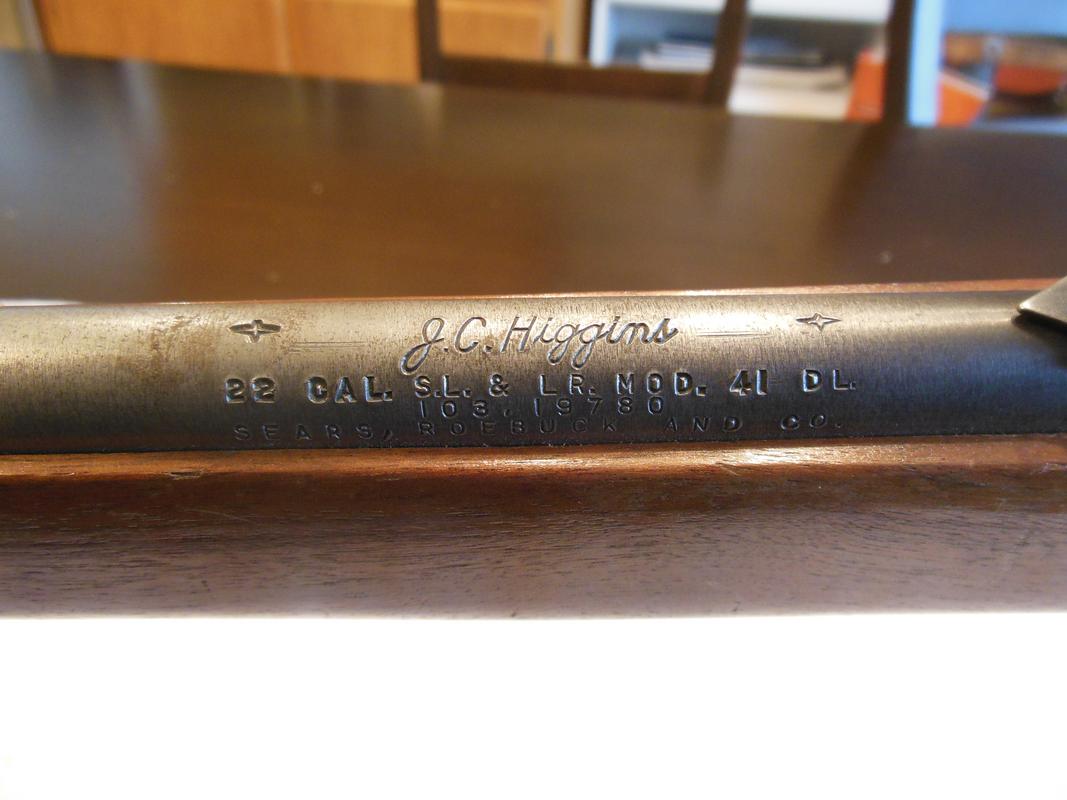 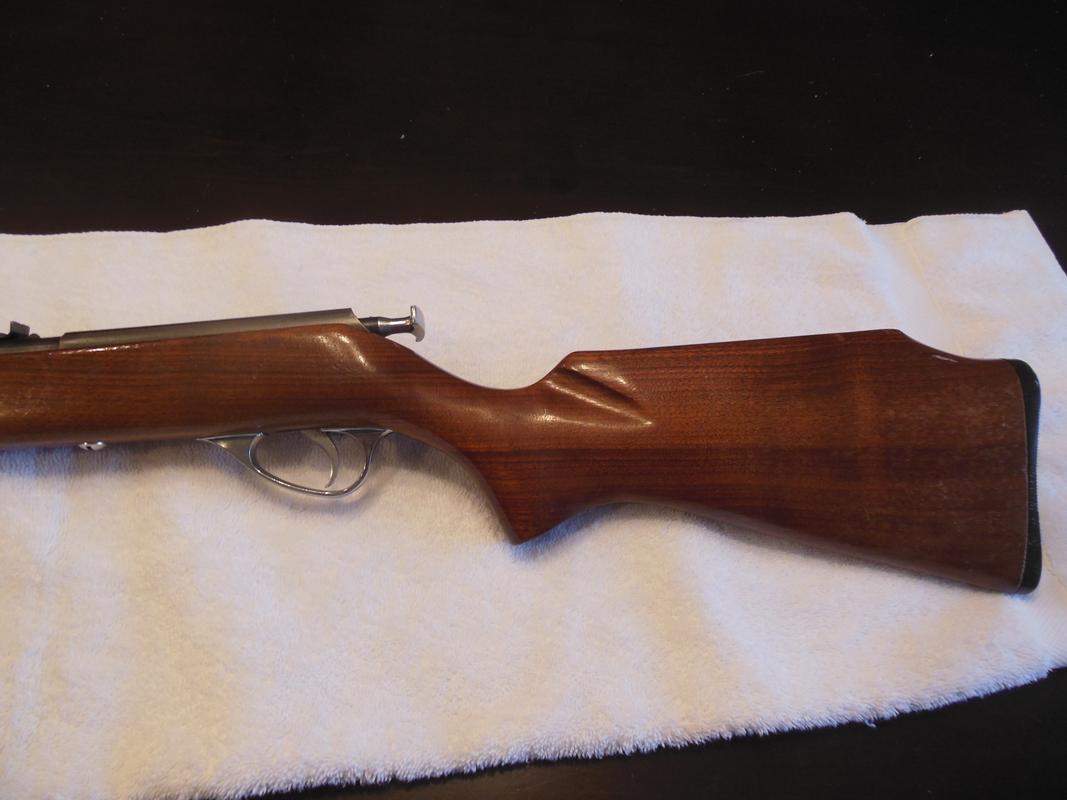 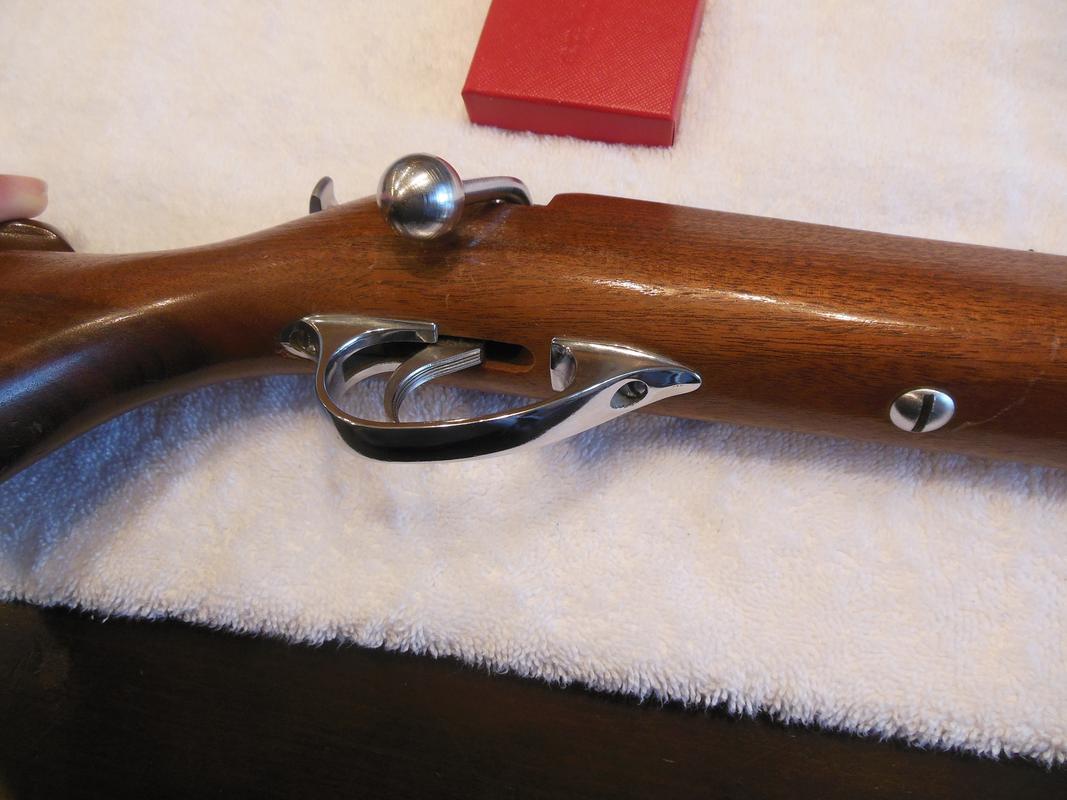 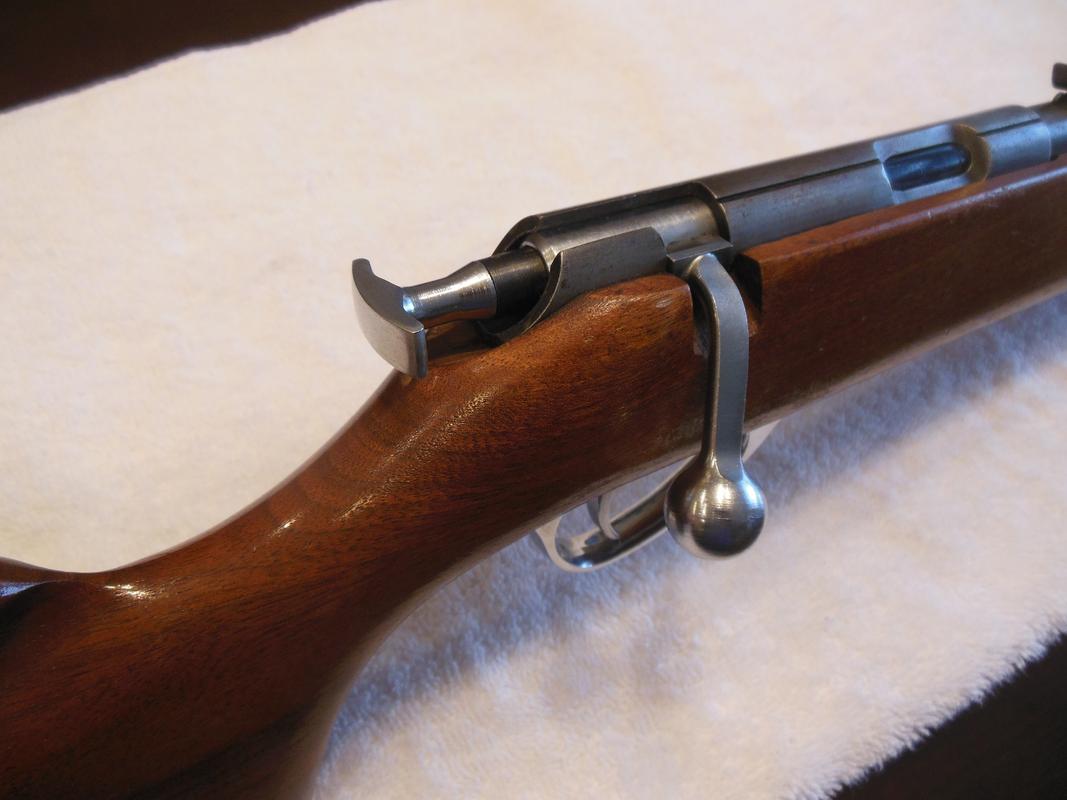 I don’t care about the collector’s value, as this’ll be a shooter, so I’ll clean up and re-blue the barrel, and clean up the stock a little.  I’ll also probably replace the v-notch sight, as my eyes aren’t as good as they used to be.  I love peep sights, so I like to replace the notch sights on new rifles with these Marbles sights: 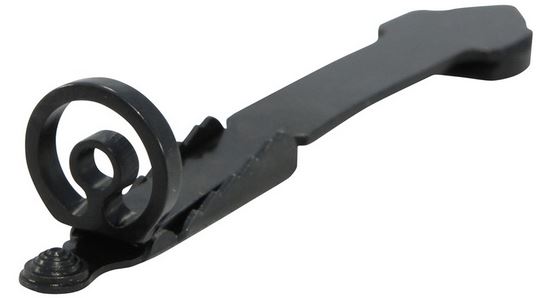 I have a Marlin Model 81DL bolt action rifle (which coincidentally, I also got for $75 at a gun show) that’s tube fed, and it’s my favorite .22 bolt action rifle.  Marlin micro-groove barrels are fantastic for accuracy.  Setting up iron targets at the range and knocking them down in rapid succession like at a carnival is a joy.  It’s from around the same era, so I’ll hope that this one shoots just as well.

MERRY CHRISTMAS to YOU! ! Its always fun to spend your Gift money on something you want, especially when you get to pick it out! I think you made a great choice.

Mark, that's a great looking rifle. I just finished up a Remington 572 that was missing many pieces and needed a good deal of repair. Nothing to brag about but it certainly is fun to shoot.

Beautiful little .22 you got there. Looks like it will be a fine shooter and also looks like it is begging to get out there and burn some powder!

I don't know how you'll mount the wings. But, I can't wait to see it fly.

With that beautiful chrome trigger guard and the polished cocking piece and bolt I would be tempted to remove the remaining blue (vinegar or swimming pool acid works great) on the barrel and polish with ascending grits of wet/dry paper then finish on a buffing machine to a high chrome like shine.

Years ago I did several that way.

Wow Bob. That looks amazing. I am now tempted to do that to a beater shotgun I recently picked up. But, I do not have a buffing wheel.

That is a great find. So many guns are coming out with synthetic furniture and new camo designs on everything. I still love the old wood and blue finishes. Your gun looks especially nice with the chrome accents. I hope it is a good and fun shooter.

WOW!! That looks stunning! What beautiful work! It is so shiney it looks like chrome.

Mark that's a fine looking rifle right there !! I would love to pike up one in that good a shape for that price

Hope it shoots as good as it looks . Bob you're a hard act to follow for sure Nice !! 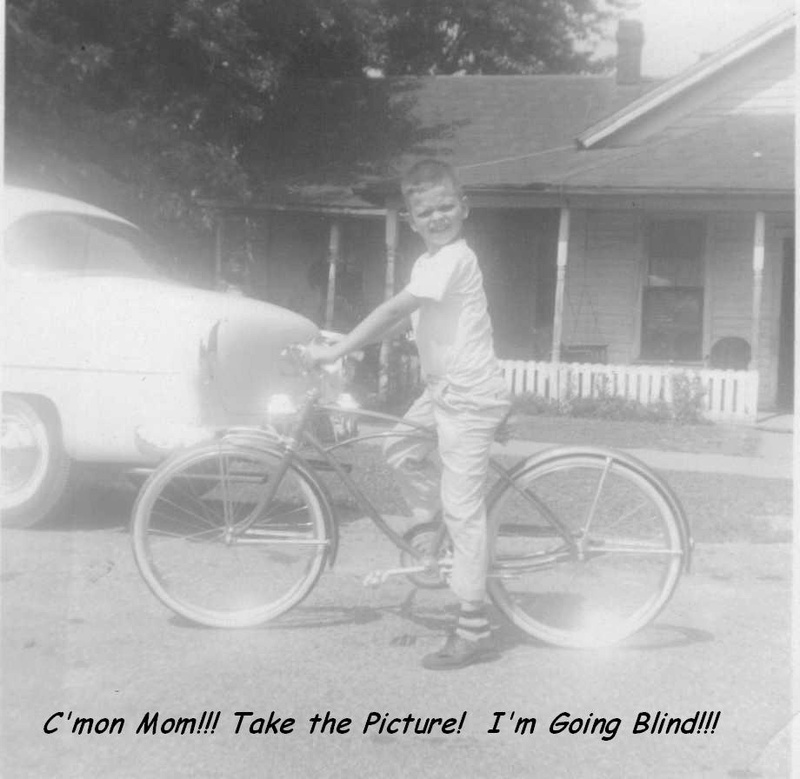 Magnum Mark... sweet find, good price, I bet she refinishes to be a real beauty


Last week was at my LGS looking at what they had in stock for reloading... I prefer to buy primers locally to avoid Haz mat fees

Decades ago I had a 1970s Rugar MK something .22LR target pistol that I liked and it would eat all the cheapo ammo I would feed it 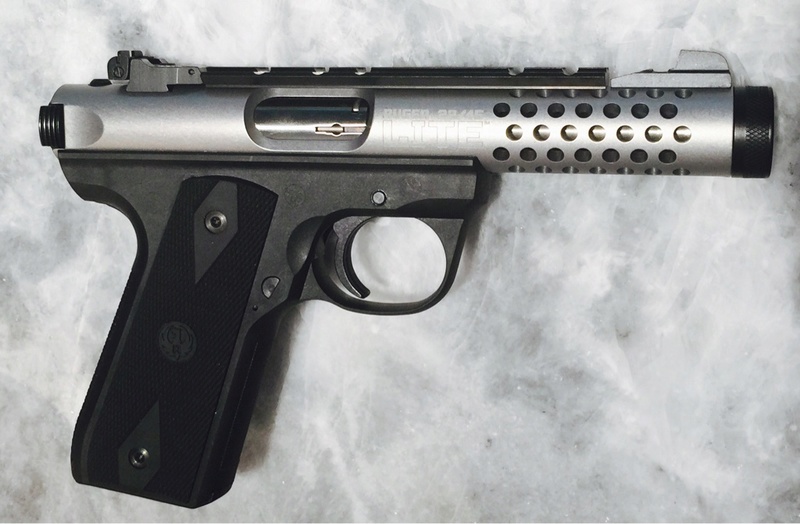 $75 is a great deal. Growing up in South Africa I shot a .22 bolt action Anschutz rifle in high school as part of cadets and later, when cadets was stopped, I continued as part of the shooting club. I have very fond memories of it all. Something quite relaxing about shooting at a target. Now that I live in England guns aren’t much of a deal here and are very expensive. Not that I sought to own one while I lived in South Africa either but every now and then I get a pang to go target shooting. I should really look into it a bit more.

@NEW222 wrote:Wow Bob. That looks amazing. I am now tempted to do that to a beater shotgun I recently picked up. But, I do not have a buffing wheel.

Any bench grinder will work, 6 or 8 inch.  Just buy a buffer from any hardware store and some compound made for steel and your there.  You don't really need a dedicated bench buffer although they have extended shafts to make the job easier.

Come on guys, Bill Ruger is turning over in his grave.......

Had to look and relook to see the proper spelling... for some reason my built in spell check does this to a lot of words

I know how to add a word to my checker but not how to correct a word IT spells differently
So Mr Ruger...truly I am

@fredvon4 wrote:Had to look and relook to see the proper spelling... for some reason my built in spell check does this to a lot of words

I know how to add a word to my checker but not how to correct a word IT spells differently
So Mr Ruger...truly I am

Your not the first one Fred, nor will you be the last.

I have been a fan of Sturm Ruger ever since I saw their first Mk I and saw Mr Ruger in interview on B&W television way back when.  I'm not a big promoter of his and their rifles but I love his pistols and revolvers.

Thankfully Firefox has spell checker, great thing for me as my spelling is attrociatious.

I spent some Xmas money the summer of ‘16 when I bought my great grandfathers Winchester 1886 lever action chambered in 40-65 WCF from my great uncle. I wanted to keep the gun in the family. Someone refinished the stock. The flamed hardened look on the receiver is gone but the bore and action are in good shape. Shoots pretty good too. Ammo is kinda pricey from buffalo arms co. 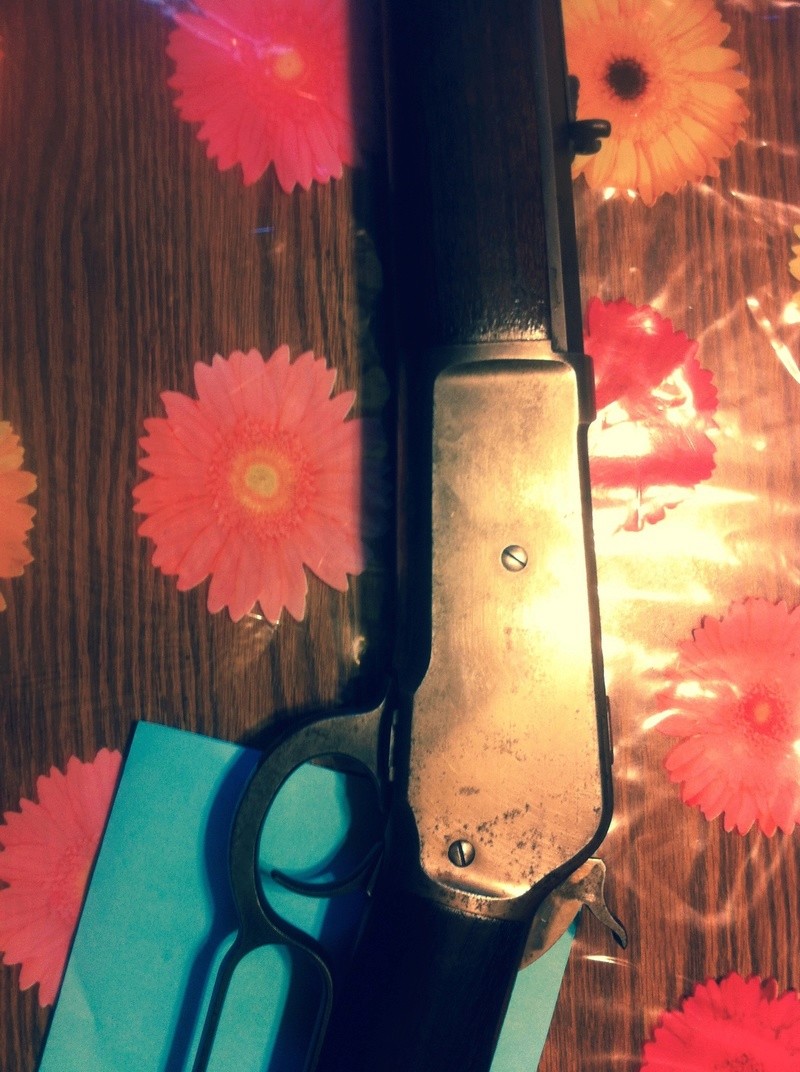 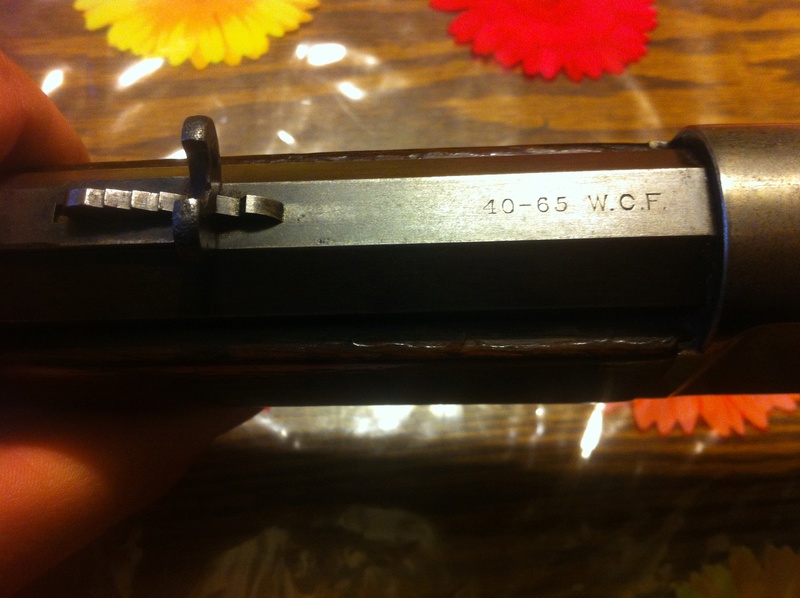 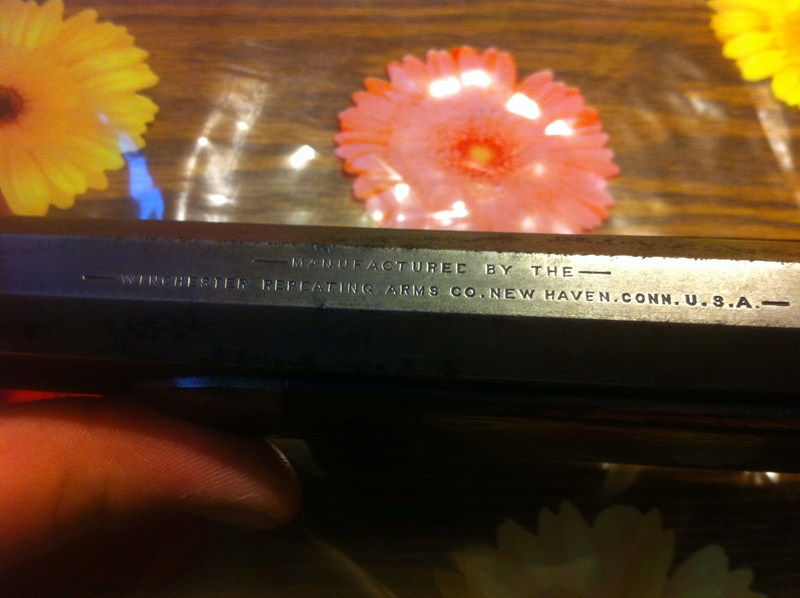 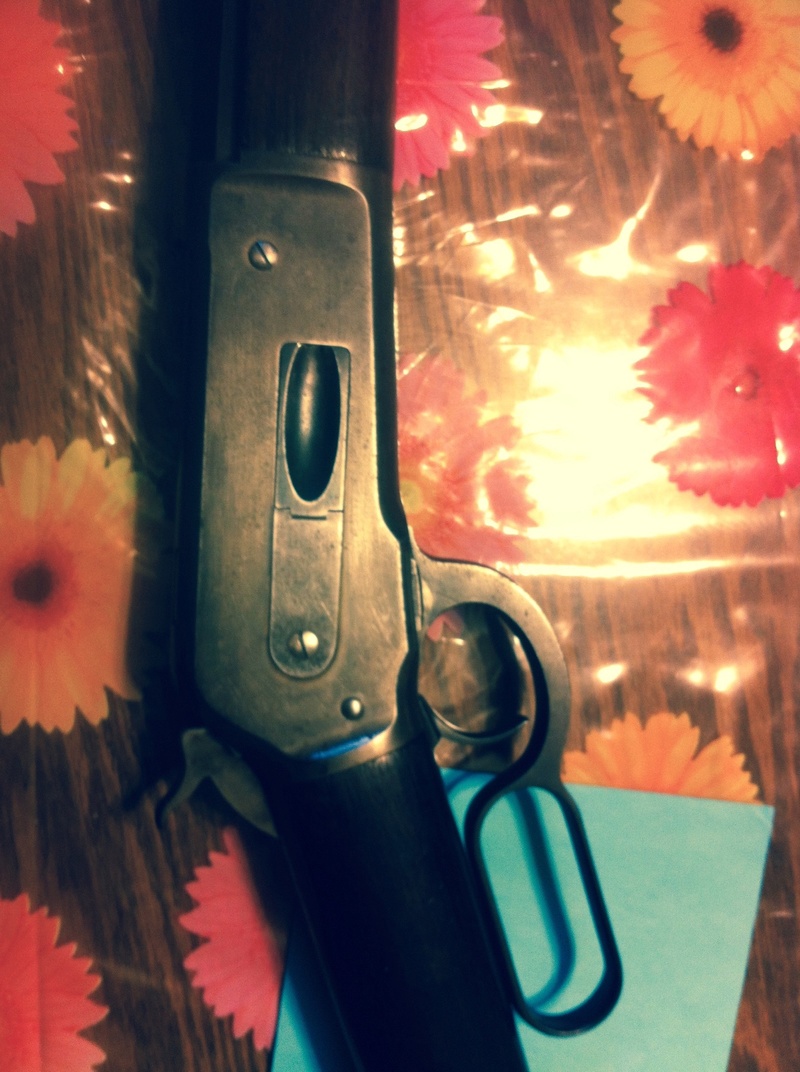 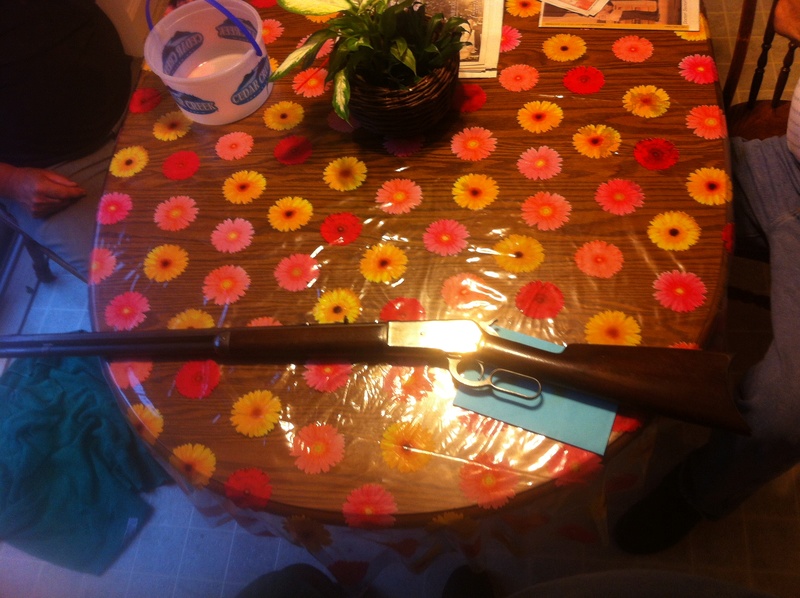 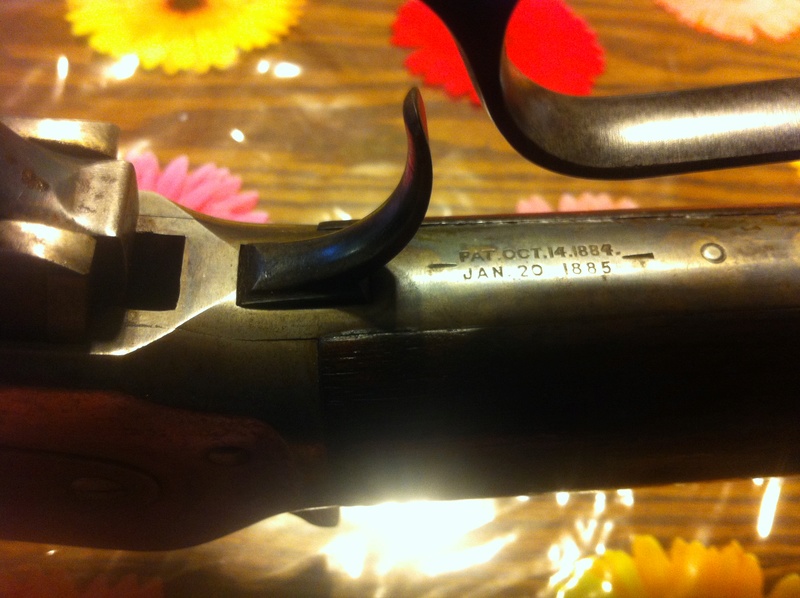 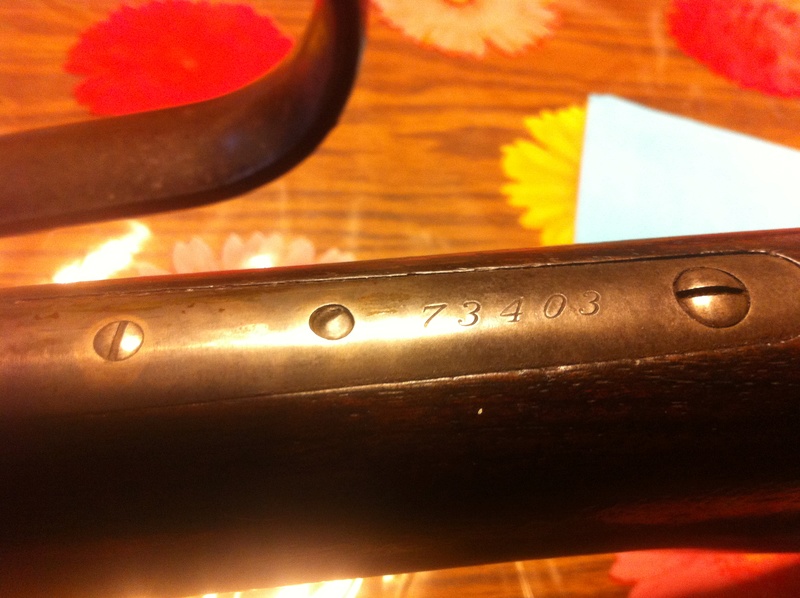 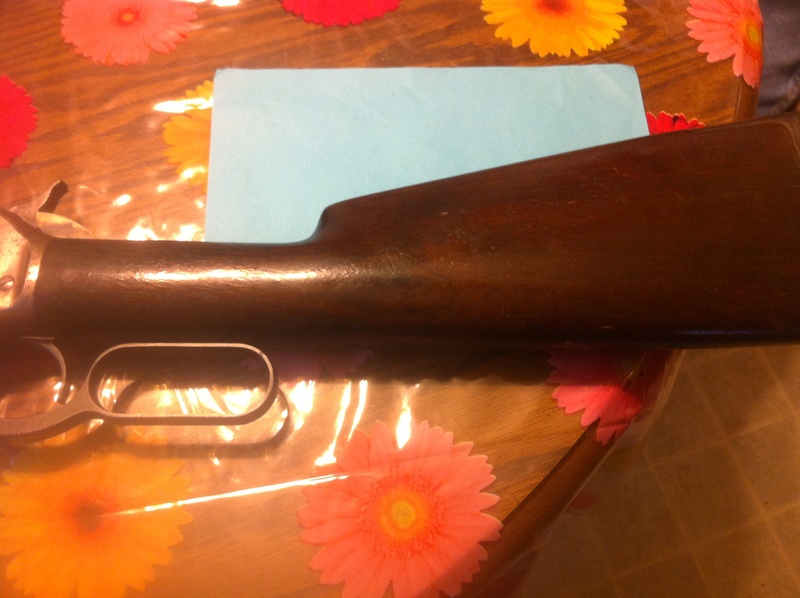 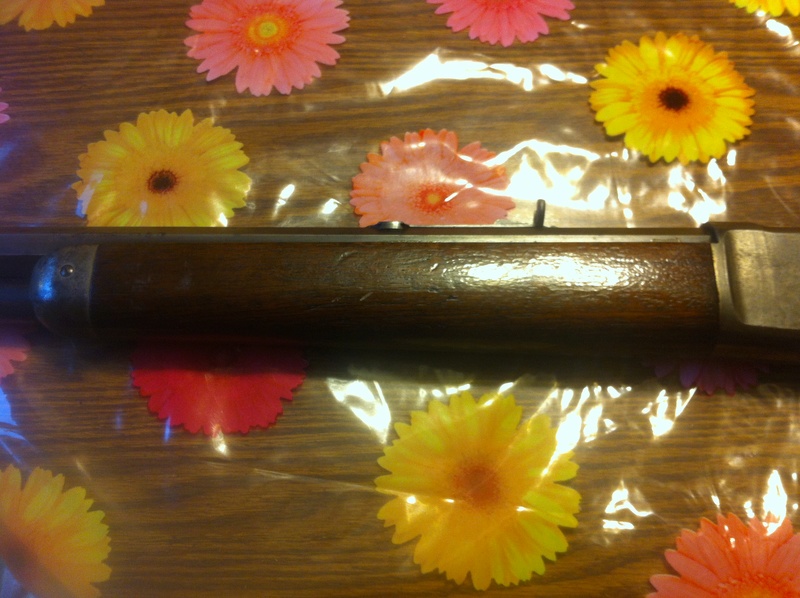 I saw a similar lever action Winchester when visiting in Buffalo Bill's shrine in the Rockies West of Denver..

@balogh wrote:I saw a similar lever action Winchester when visiting in Buffalo Bill's shrine in the Rockies West of Denver..

You must mean the one in Cody Wyoming. We stopped there on our way to Yellowstone and LA back in the mid 50's. Eye candy for a 15 year old firearms fanatic.

Beautiful rifle Jason, and a family keeper. The Old Western Scrounger used to load for it as well. I got some 50/70 rounds from them but it's been awhile.

Bob I meant this one which is near Golden Colorado
http://www.buffalobill.org/

@balogh wrote:Bob I meant this one which is near Golden Colorado
http://www.buffalobill.org/

Thanks, Wonder how I missed it when I was in Golden back around 2003, my son lived in Denver and had a cabin in the Rockies.

Seems like the one in Cody was near a tourist trap called "The deepest hand dug well in the world". I remember it because they had tossed rattle snakes down there along with a bunch of mice huddled in a corner. I thought it cruel.

Did yoi hsppen to visit the RedRock Amphitheatre just at the feet of the Rockies on the outskirts of Denver? Once I visited there on a Sunday morning and heard a band gathered spontaneously from Denver citizens play a wonderful jam of drumming...

@balogh wrote:Did yoi hsppen to visit the RedRock Amphitheatre just at the feet of the Rockies on the outskirts of Denver? Once I visited there on a Sunday morning and heard a band gathered spontaneously from Denver citizens play a wonderful jam of drumming...

Sorry, I missed this question.

Yes, I know of it, pretty famous place but I did not get to see it during our visit.

We did Estes Park, Garden of the Gods, the I Max theater in Denver and ate at some exclusive restaurant that served rattle snake and buffalo burgers among other things. I had pork chops.......

And Mark, I know you must treasure that early first edition Ruger Automatic that your Grandmother gave you. A family treasure and a well sort after collector piece. I have been looking for one for years.

I will have to add the new Mark IV once Ruger works the early production bugs out. It's interesting to note that Bill Ruger had the red background of the emblem changed from red to black when Sturm died. They brought it back for the 50th anniversary edition and it's back now on the Mk IV.