I decided to spend an hour this afternoon roughing this little guy out. It may not be as hard as I originally thought.

My biggest concern is whether or not I need a flywheel or will that Don’s speed wheel suffice. 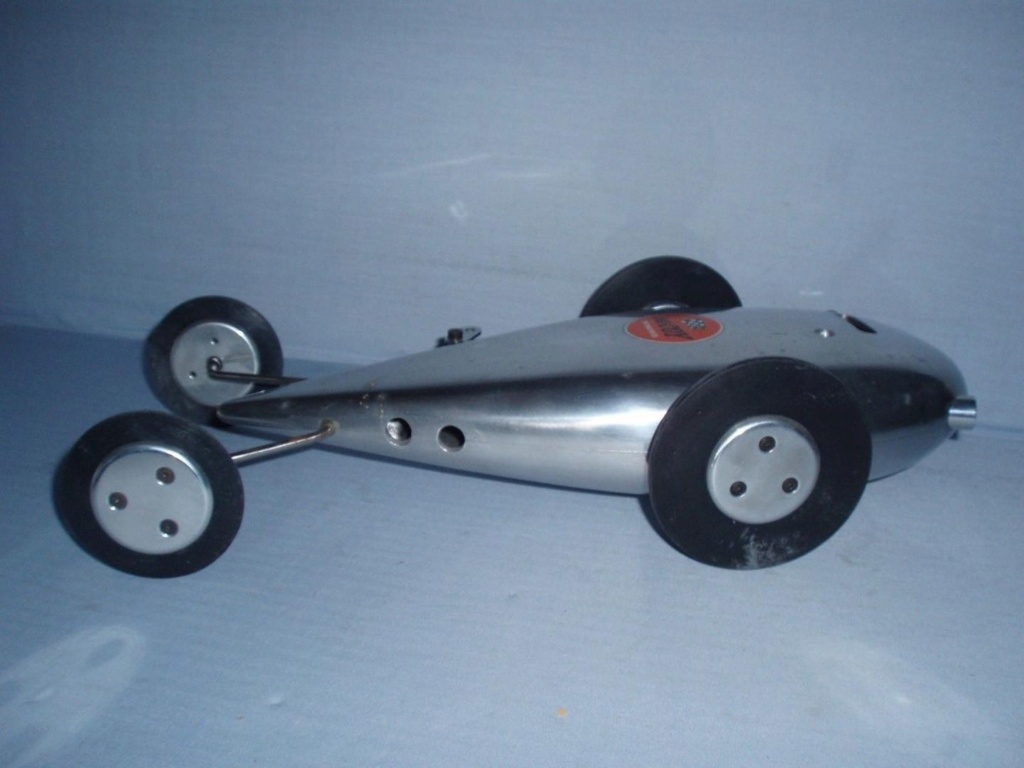 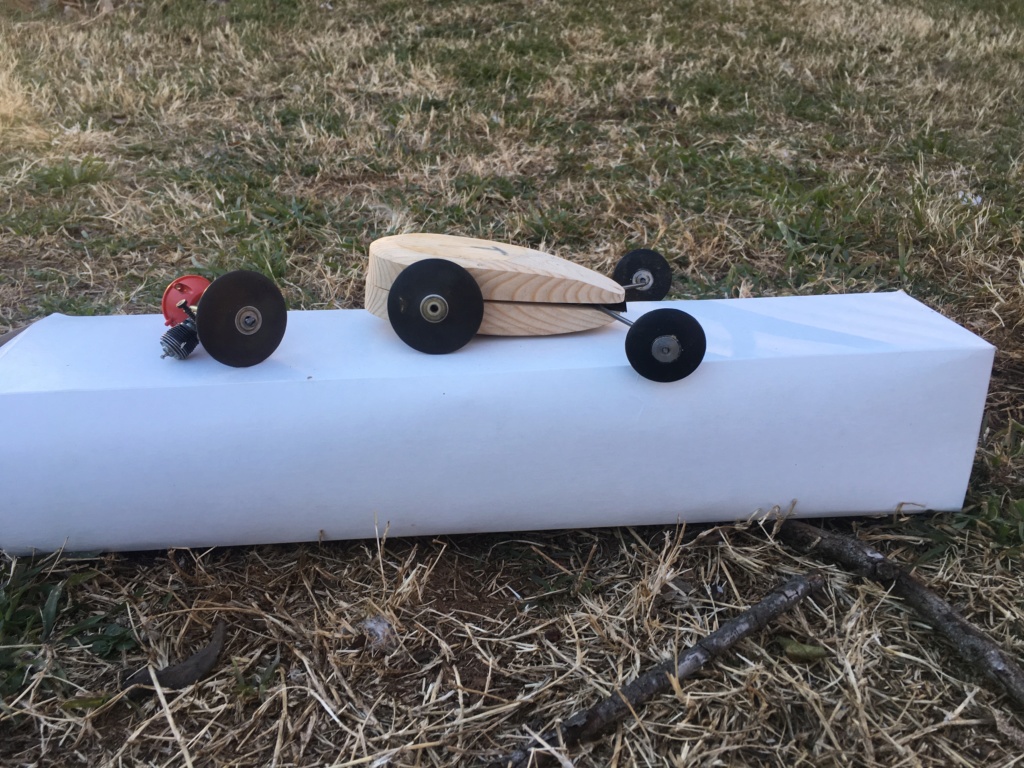 Cut and try Ron, but seems like it should on that engine.

Yeah, I could never justify spending that much money on a real one.

I thought about making a Frog, but the teardrop would be quicker. 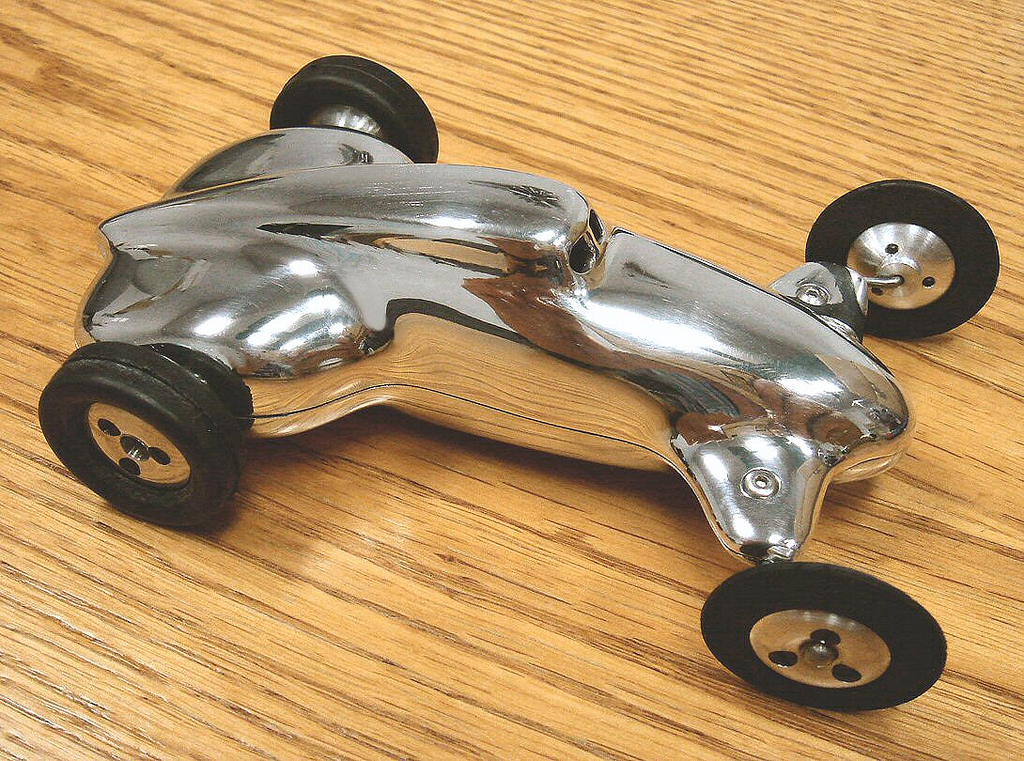 Looks like you got a real good start on that car there.

Going through some of my old engines Ron I found this: 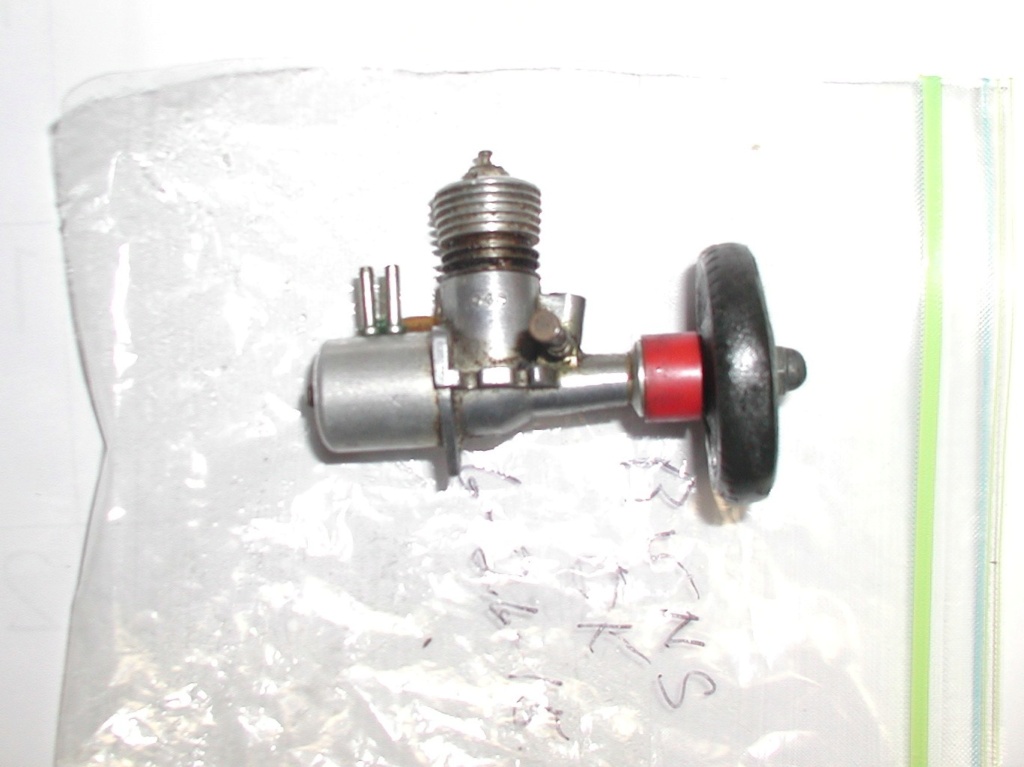 I see Ron is going for speed , good start brother ,, i did get my controler out to find out i need more batteries LOL

So, I have to ask. It the one pictured just a wheel screwed directly to the engine with the prop screw rather than a propeller?

NEW222 wrote:So, I have to ask. It the one pictured just a wheel screwed directly to the engine with the prop screw rather than a propeller?

If it is; you might try to see if it will run that way first. Even if the drive-wheel is lightweight.. it may be enough for the .020.

There are DIY plans for IC engine-powered model-car starter-boxes on the web. They use an electric-motor with a friction-wheel on the output-shaft. There may also be a 2nd "idler" wheel/roller.. similar to a miniature chassis-dynamometer. A foot or knee-actuated power-switch allows 2-hands on the model. Designing/building one for 1/4A size models could be interesting. It certainly shouldn't cost too much to build.

Right now the wheel is just mounted on in place of a prop. The picture I took was roughly 1hr’s worth of work. Everything is in the planning stage at this point.

The wheel feels just shy of 1/2oz. I will be running it before mounting it. It may be enough to act as a flywheel however, it’s not balanced so I can only speculate as to how it will run. I’ll probably do that in the next day or two.

Right now all I have into it is the cost of the engine which I think is $15. Everything else is just stuff I had laying around. I did buy a can of paint for it today so add $5.

I am not entering this in the contest as it’s a conflict of interests. I am doing it just to show how easily it can be done. Hoping to drum up some competition!

Are you going to enter Roddie? I was thinking that I really could have used some of your O-ring aluminum wheels.

Cribbs74 wrote:Right now the wheel is just mounted on in place of a prop. The picture I took was roughly 1hr’s worth of work. Everything is in the planning stage at this point.

The wheel feels just shy of 1/2oz. I will be running it before mounting it. It may be enough to act as a flywheel however, it’s not balanced so I can only speculate as to how it will run. I’ll probably do that in the next day or two.

Are you going to enter Roddie? I was thinking that I really could have used some of your O-ring aluminum wheels.

It's good to "stage" components.. and visualize how the model might look. Regarding the aluminum wheels and O-ring tires that I've made; Let me know what size you need.. and I'll see if I have anything close.

Thanks Roddie, I will measure tonight. They may be too light though.

rsv1cox wrote:Going through some of my old engines Ron I found this:

Engine for a Wen Mac Automite?

I'm not sure but I think it is. Came to me with some other engines. Which gets me to thinking about my response to Ron. His .020 might need a flywheel.

This one had a nasty engine in it. These enclosed tether car engines sure do get hot. 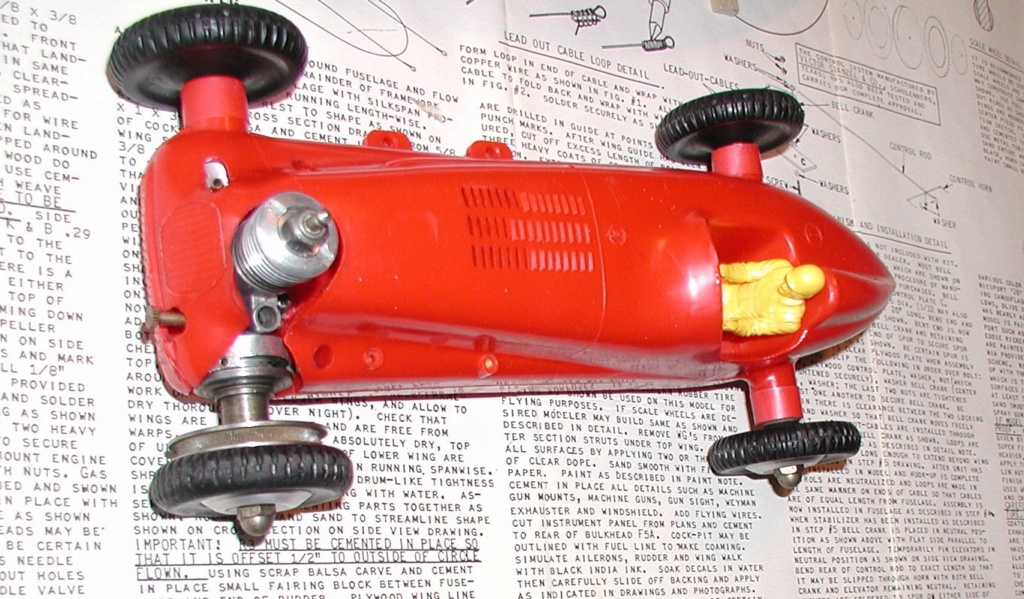 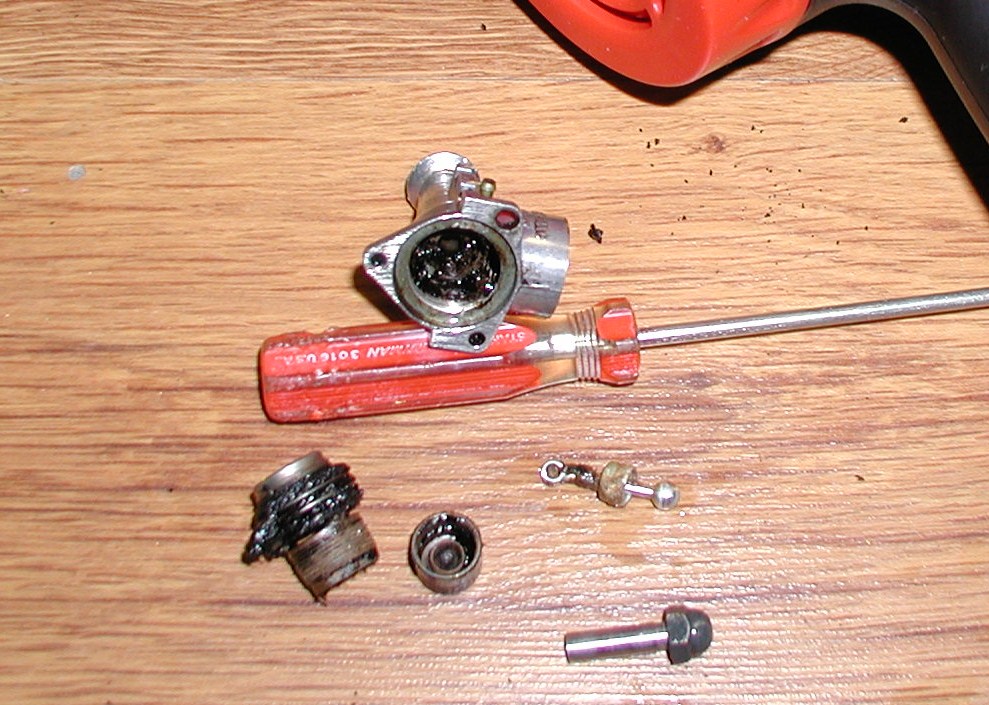 The best I can say and come up with on this one is....

I tried to run it up on prime last night, it did run, but the engine itself is an unknown as it was bought at a swap meet and never disassembled and cleaned. I will be doing that shortly. The wheel attached is pretty sizeable for that .020, it probably weighs 10x more than the standard .020 prop.

I am still mocking things up, so I haven’t been serious about the engine yet.

Funny thing, I watched a you tube video last night of the full sized teardrop tether. I found out what I thought was the rear end is actually the front. The fat end is the front of the car...

To me that doesn’t look right. So I am doing it my way, pointed end out front. My luck is that it is designed that way for a reason. It will probably become airborne. I’ll add some weight to the nose just in case.

Regarding starting a car engine, I've seen it where people turn a bicycle upside-down, spin up the rear wheel with the pedals and touch the wheel of the car against the tyre. Seems to work pretty well.

Thanks Rod, I was hoping you would chime in.

The bicycle is exactly what I am going to use. Years ago I read an old RC modelling book that had a picture of a guy starting a Jerobee car using a bike wheel. It stuck with me. Any thoughts on the flywheel?

Some progress, I have the layout done, need to notch the lid to accept the cylinder and attach the axle and design bridle mounts. I have some aluminum stock that should work well for that. After that it’s break it all down, paint and re-assemble. 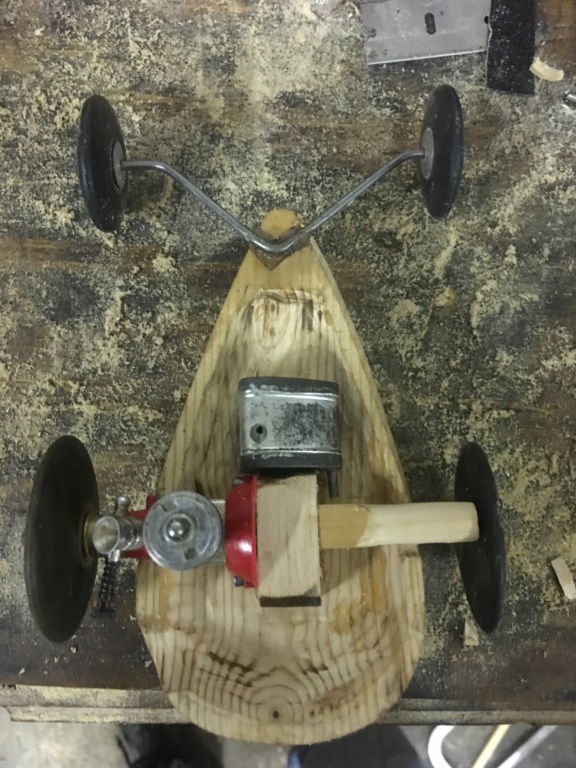 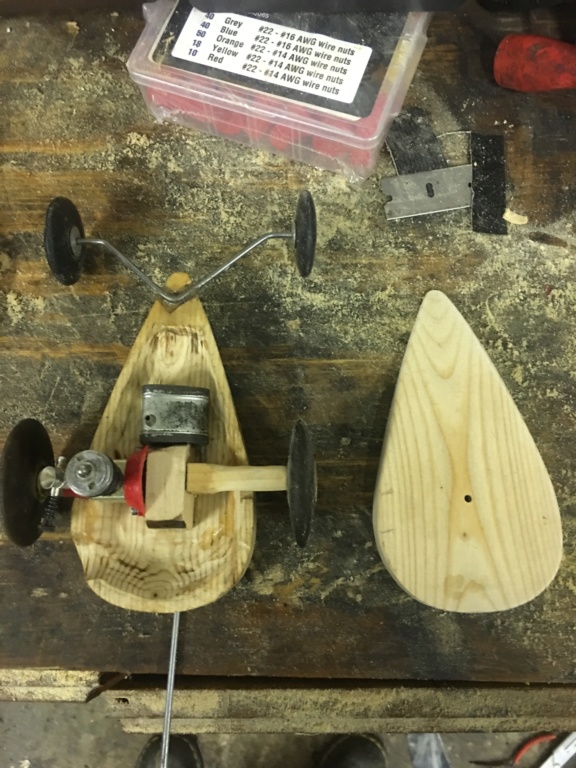 Looking good, and coming along nicely.

Looking good Ron , how did you get the extra wood out around the engine mount ? That is strange about it going (running ) what looks like backwards ?!

Yeah, check out this link. Looks like it runs with the fat end up front.

I bet there was .. Man that thing was turning up darn good But didn't sound like a .020 to me LOL I wish they still did these races around , that wood bee a lot of fun !!

If you look at the teardrop car and think of a dragster (it kinda looks like one of those front-engine machines from the ’60s), intuition tells it should go ”pointy end forward”. Especially if you think performance = rear wheel drive

Aerodynamically though, it is more efficient going with the blunt end first. Kinda like a fish, or raindrop. Take a look at ”belly tank lakesters” from the Golden era of motoring: 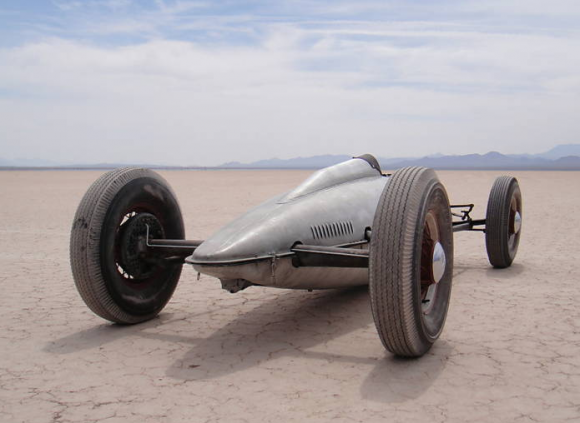 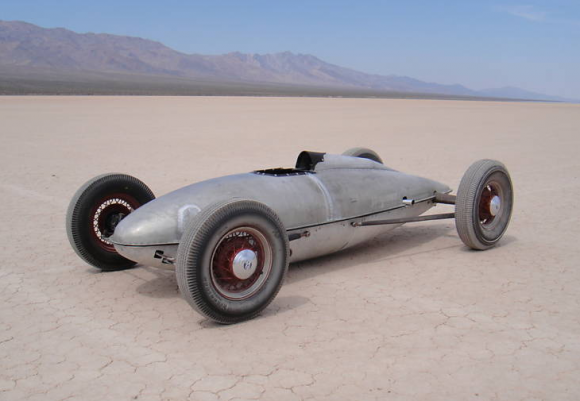 Blunt end first, pointy end back just as it travels under the belly of a P-39. More about that particular beast:

If you had a reed engine on it you could run it first one way, then the other and see which one is faster

Thanks Kari, yeah a reedy would have made it simpler and would have allowed running in either direction, but the TD is more powerful.

So, it’s all mocked up, time for sanding and paint work. Not much longer now 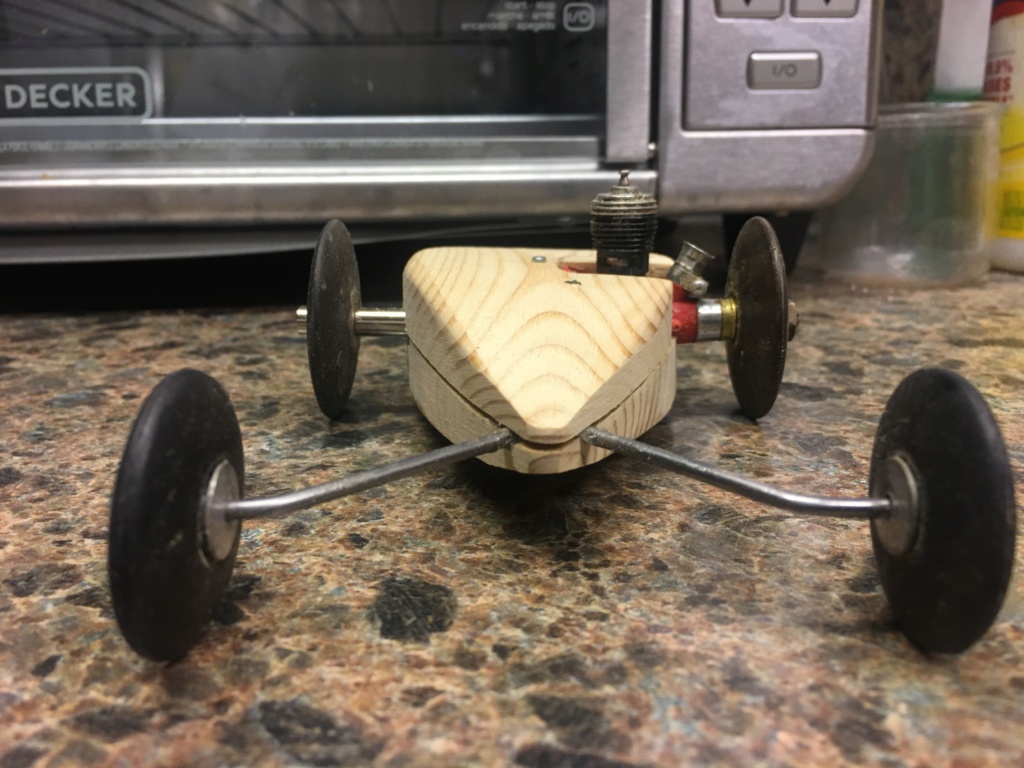 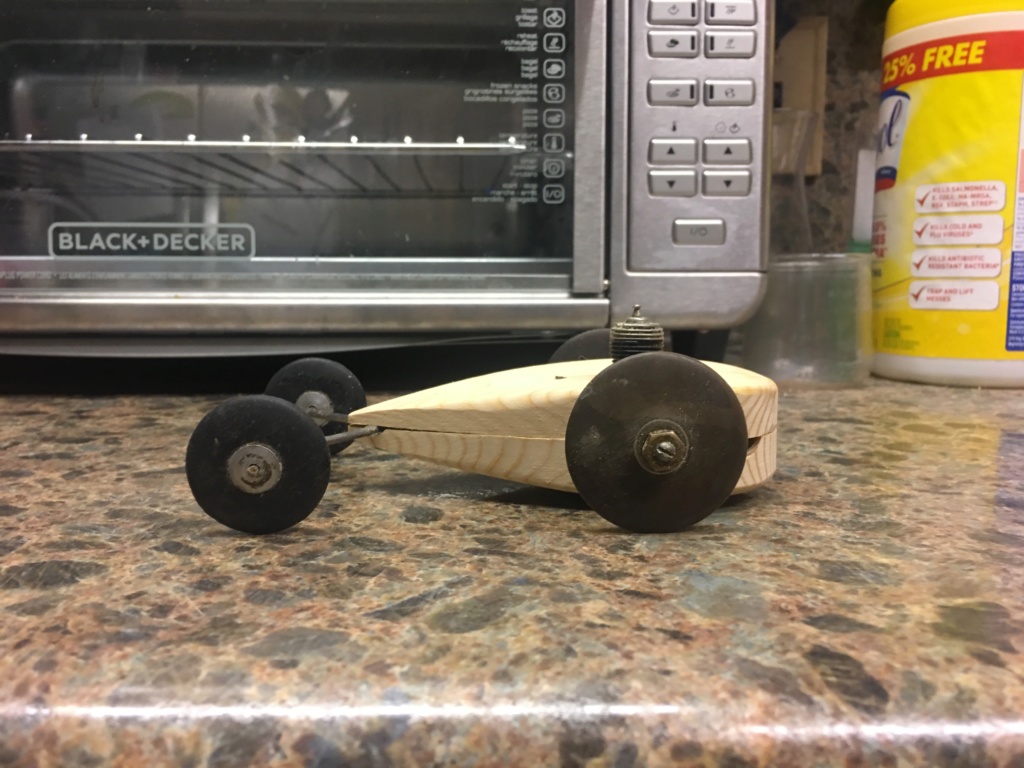 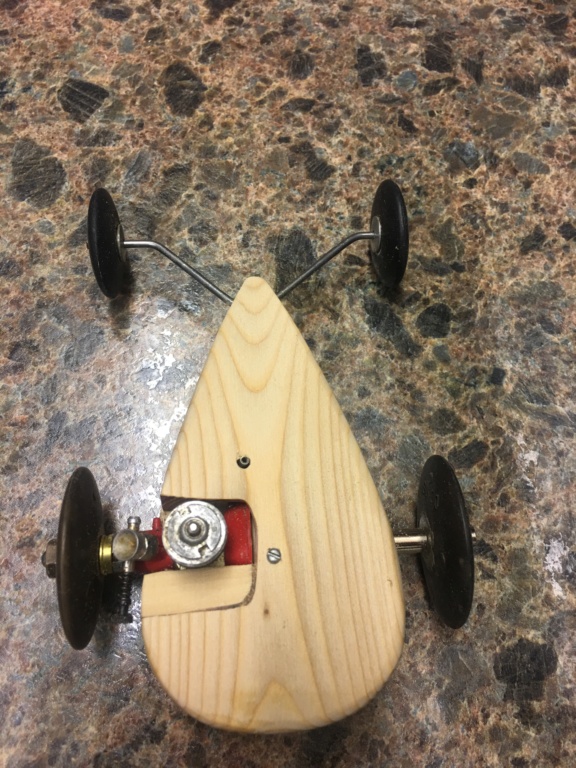