I was able to aquire a Hemi head (Blue Magic) stuffer backplate and modified crankshaft
These are parts made and modified by the late Marvin Denny. The head is a Tom Muggleton part.

So, I assembled it this evening. Still waiting on a Tigre needle to complete it. Nobody modifies early Fox engines so I thought I would give it a shot. I also cleaned off years of burnt castor with my new Ultrasonic cleaner! It worked really well. 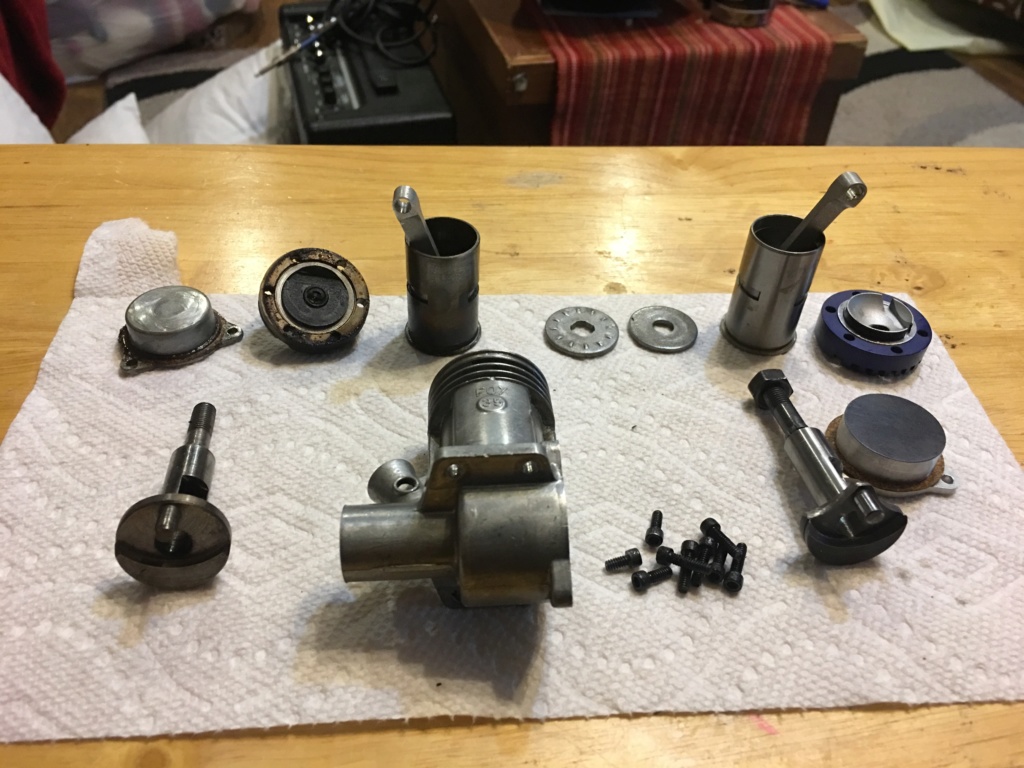 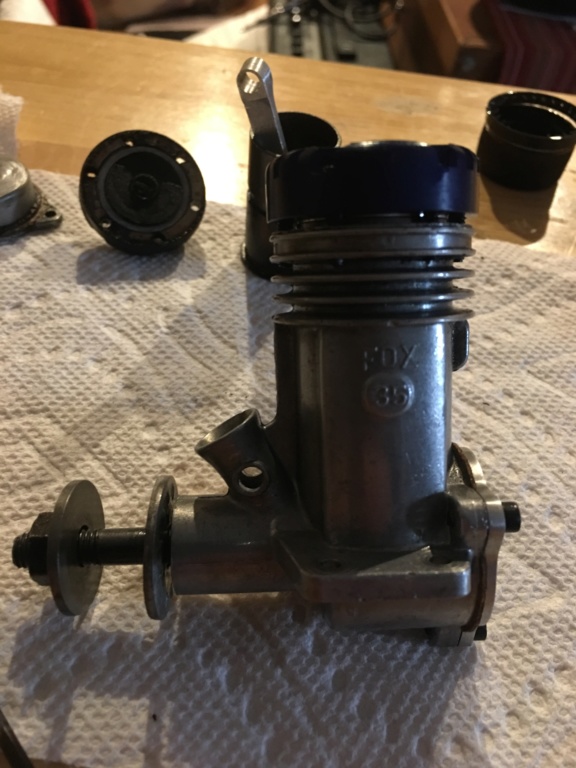 What is the purpose of the hemi head? In the picture it looks really bowled out. I know they must do something good because I've read of many people using them, but wouldn't that lower the power an awful lot?

I want to know more about the Ultrasonic cleaner too. I've thought many times to make a pan that could be attached to my orbital palm sander. But that would not be Ultra sonic... just plain ol' slow-sonic. Might work okay to fair.
Rusty
_________________
Don't Panic!
...and never Ever think about how good you are at something...
while you're doing it!

From Big Iron himself...

The Hemi-head (Fox brand) and the stuffer backplate were NOT designed to give more RPM, but more torque in the hard fourcycle with less runaway when transitioning to the two, and to give longer life to the rod and shaft.
E-mail me for more. gotta go---bye
Bigiron aka Marvin Denny mdenny4@cox.net

I don’t know squat about ultrasonic cleaners apart from what I was told to do here. Basically I put the dissassembled engine in a pint jar. Filled it with some crappy Omega fuel and capped it , I then filled the hopper with water and turned the machine on. I set the temp to 60 degrees C and then walked away for 50mins.

So instead of a cast back plate it is made from billet aluminum? Helps seal the crankcase better?

The stuffer backplates go into the crankcase a little further, this keeps the connecting rod from walking back and forth along the crankpin during operation. An added benefit is it decreases crankcase volume and can help burping Foxes. Mine never had a really pronounced burp so I am not expecting it to do anything for mine.

The Fox case was modified in 1954 with a larger bypass which allows a huge shot of fuel to hit the glow plug during certain stunts. Basically fuel puddles in the bypass because the fuel moves slowly in the engine. Decreasing the crankcase volume allows fuel to move through the case quicker and can prevent the puddling.

Ron, that stuffer backplate you show there is not a Fox stuffer. That was made by Marvin himself and there's not many of those around. It has a Teflon material attached to it. He offered me one at Brodak's one year and I didn't take it. He was a generous person and a pleasure to talk with.

Thanks Ken, I knew Marvin made it, but I had no idea what the coating was. I can’t imagine it would last long.

The Fox stuffer is hard anodized. When the anodizing wears off which really takes place rather quickly, it's not a real good thing. My buddy Dan was making stuffer backplates from graphite impregnated Delrin. He also put a o-ring groove around the perimeter to eliminate gaskets all together. He made a jig to hold the case in the lathe so he could true up the inside of the case. Currently he's working on a way to bush the rod on the big end making a better rod.

Does Dan ever sell his stuff? I would love to have a bushed con rod. I would also like to have my older cases rebushed.

You would think that the nose of the case could just just be attached to a regular chuck and spun that way. This is assuming the crank was originally drilled true and not offset.

Everything I have read about the "burp" indicates it is both position sensitive and NVA sensitive. It seems to be caused by cooling of the fuel/air charge through the bypass in certain maneuvers. It is more apparent on profiles with side mounted engines than coweled upright or inverted engines. It can be "cured" with a stick filling a portion of the bypass, and sometimes worked around with a higher rpm setting instead of stuffing the bypass.

I have not been inclined to try anything with my Fox35. I have not flown it enough to decide if it has a burp.

I find the modifications interesting. I look forward to seeing it fly.

Not sure where you read it’s the cooling of the fuel that causes the burp. I have been told and read that it’s the slow movement of fuel and air through that big bypass that allows fuel to puddle. When you do outside manouvers it causes the excess fuel to hit the glow plug and momentarily distinguishing it.

So yeah, the stick. I don’t do it, but the theory behind it is it speeds up the mixture through the bypass by decreasing the volume. So no fuel can settle.

I just deal with the burp, for me it’s just easier to use a good glow plug and make sure my tank height is optimal. I have never had a burpy Fox cut out on me, just a momentary decrease in RPM and then it picks right back up. I just fly through it and accept that it’s going to burp.

Jason, a Fox plug in general will cause the flame out. They're just outright terrible plugs. The posts come loose, the insulation blows out, the rpm's drop as soon as you remove the battery. Fox plugs use a filament so thin it glows almost white. The filament becomes extremely distorted just from running and then a good amount of coils become extremely compromised and stop glowing. I have had them completely suck out of the plug and get jammed in the cylinder ruining it. The idle bar in my opinion just keeps the fuel load from drowning out the plug. I have had better results using them in the Fox .35 vs none.

A Fox .35 doesn't burp in a upright position or inverted. It also is more powerful when in this position vs profile mounted. While the wood in the bypass is said to cure the problem, it makes the engine run like crap. It can also damage the engine. It can distort the cylinder . The cylinder needs a bit of expansion room and when the engine starts to heat up, it's now jammed against that piece of wood and has no breathing room. The Fox isn't sensitive to tank height, it just needs the tank just slightly higher than centerline. It's sensistive to incorrect plugs and fuels that have too much oil in it. If you run a hot plug, run it in a wet two beeping into a fast two then the engine won't burp.

Alrdrich deemed the term 4-2-4, it's a myth. The Fox will run a 4-2-4 but it will cause one to crash your plane if you choose to do so. The engine run is too rich to fly the plane in this mode. Ron is exactly correct on his analogy of what is taking place. If the needle is set correct, the only drop in rpm is only enough to be detected audibly and the plane flies right on.

Ron, replacing a bushing in the Fox is a bit difficult. It's also risky, the case is indicated in the lathe and when the bushing is drilled out, the case is exceptionally weak. Currently, he's setup spinning aluminum cowlings. We tend to really flood him with projects at this time of the year. I can certainly ask as I have a few I would like as well. Rusty's flying buddy Bob Z has a Ferrari and when he put new valve guides in it, Dan made all of our engine bushings from them.

The real problem that's overlooked is that when the bushing is worn, so is everything else. The cylinder even gets wobbled out on the bottom end and the wrist pin holes also become excessively worn. The engine usually needs the shotgun blast at that point and a lot of TLC to get everything back in order. Wrist pins are retained by circlips, so Dan uses the next size drill rod and makes new ones with Delrin end pads.

I don't know where "cooling" came from, I looked and read a brunch of stuff some time back...

I used Fox idle bar plugs in the OS FP 40 that I flew back in the day. Don’t remember any engine issues. Although I only used the pink omega 10% fuel in it.

I think it’s more of a QC issue. Some plugs are ok and most not. Fox plugs have a bad reputation, just about every modeler I have met has nothing good to say about them.

I really think if Duke had made the appropriate changes that needed to be made it would still be available today.

The needle valves and the plugs are terrible. Had he changed those earlier on and maybe adopted ABC technology he would have stayed more competitive with the Japanese offerings.

The Fox .35 is a tank,has good power and it’s super light. It’s hard to wear them out if used within it’s limits. The .35 that I just modified is almost 70 yrs old. I didn’t really have to do anything it ran fine. I just wanted to give it the royal treatment it deserved.

@pkrankow wrote:I don't know where "cooling" came from, I looked and read a brunch of stuff some time back...

No biggie. I certainly wasn’t trying to be rude or anything so I hope it didn’t come off that way.

@pkrankow wrote:I don't know where "cooling" came from, I looked and read a brunch of stuff some time back...

No biggie. I certainly wasn’t trying to be rude or anything so I hope it didn’t come off that way.

I'm thinking it was either a misprint or a misread, either way, for "pooling," which jibes with Ron's original explanation.
Rusty
_________________
Don't Panic!
...and never Ever think about how good you are at something...
while you're doing it!