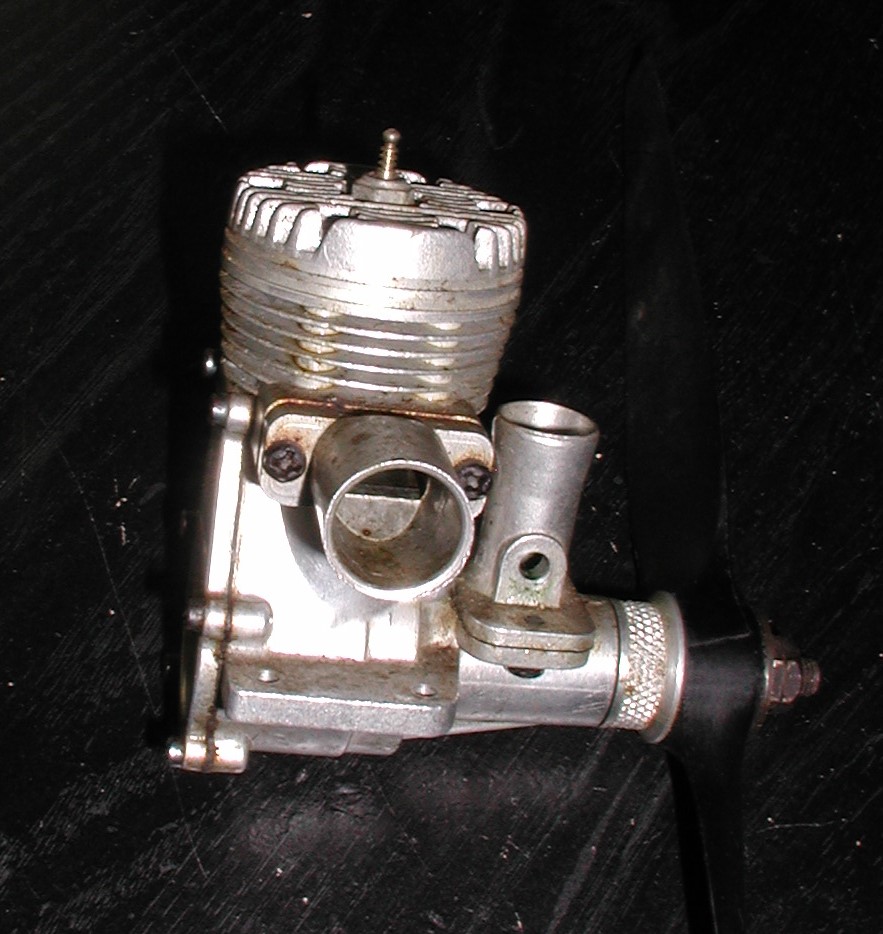 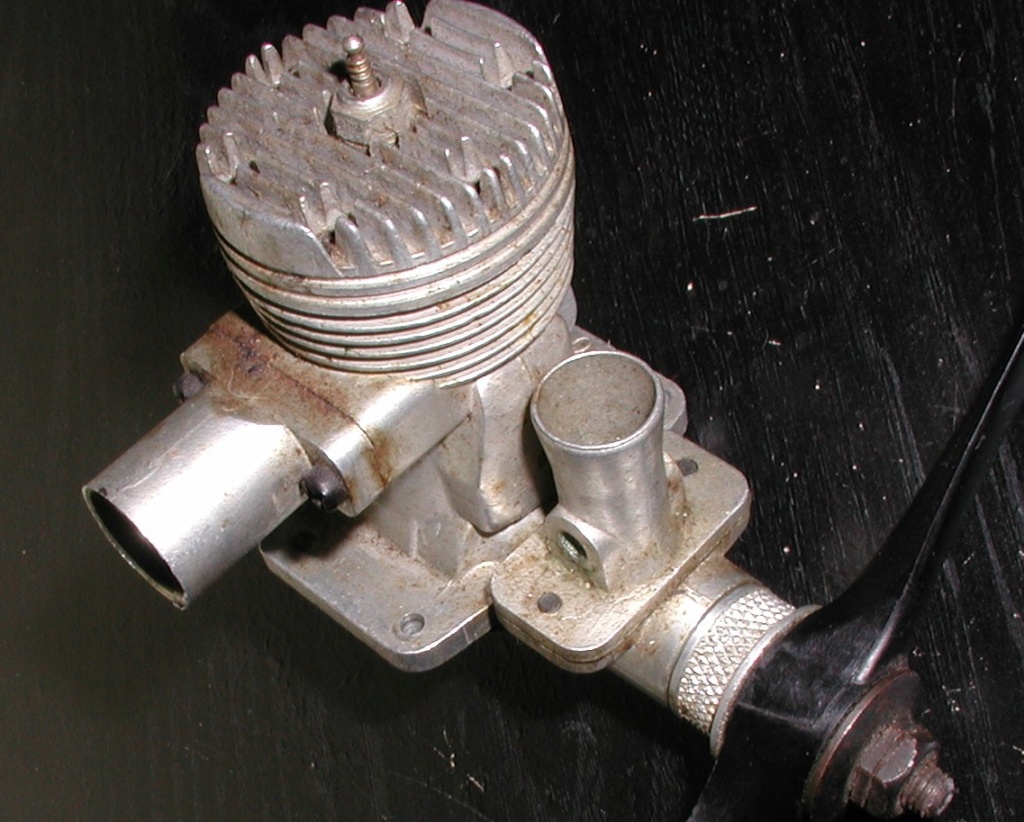 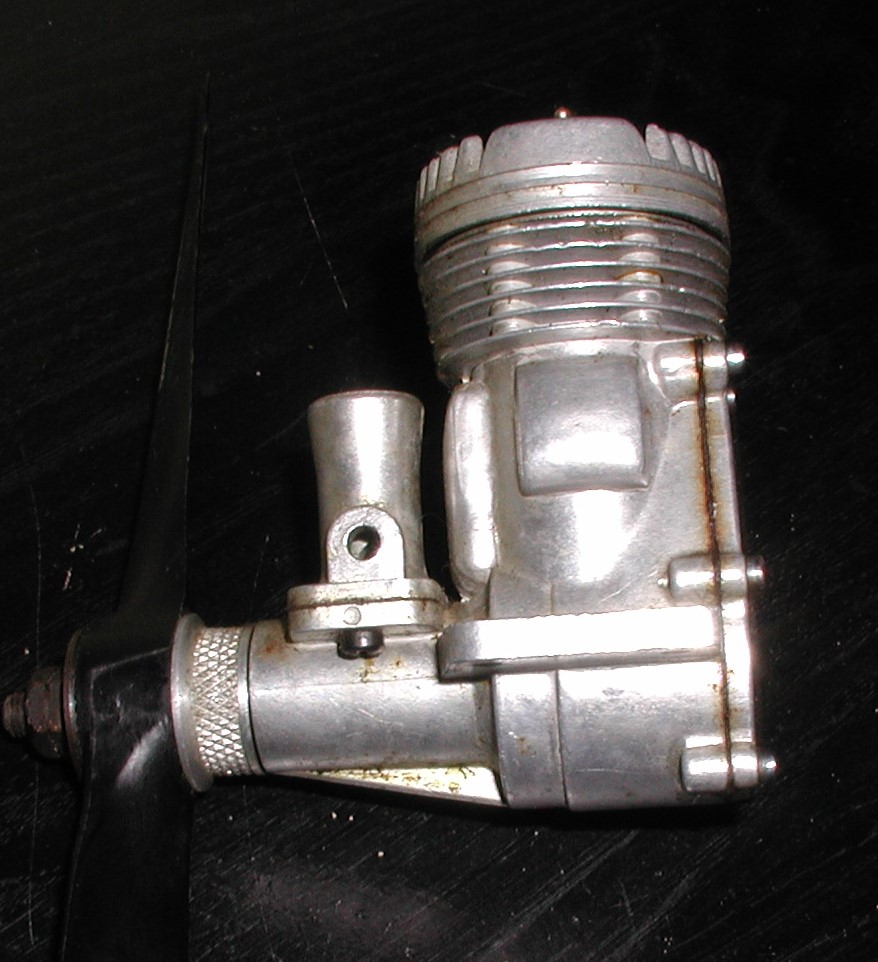 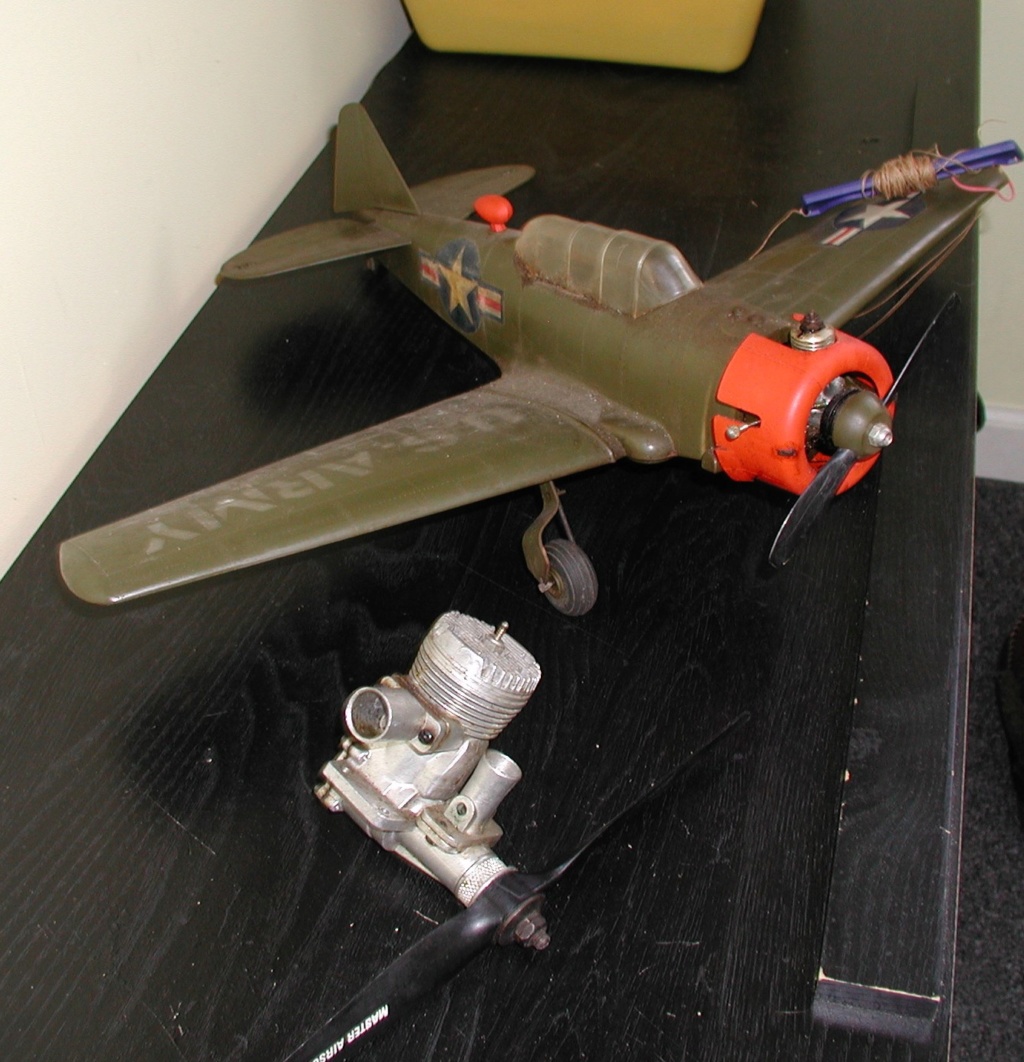 I Know the We Mac Texan but I can't figure the engine.  It just has 40 on a bearer.

Based on what I have seen, the engine appears to me to be a Fox .45. I'm quite familiar with the .40's. I have bushed Fox .40's, Fox .40 ball bearings, cast iron versions, ABC versions and one Quickie version and one Aldrich large case .40. The Quickie was a .40 event which used a .50 sized case. It most closely resembles what you show in the picture. However, the knurled front on your engine at the drive washer is something I have only come across on the .45. In addition, the 2 bolt carb similar to the same setups on the .15's, .19 and .25 engines. After the .40 size displacement, I get a bit lost with the Fox's, I know they're Fox, I just don't know the ins and outs.

I think it's a Fox Eagle.  It has 40 stamped on one bearer.  Looks like someone scrubbed it. 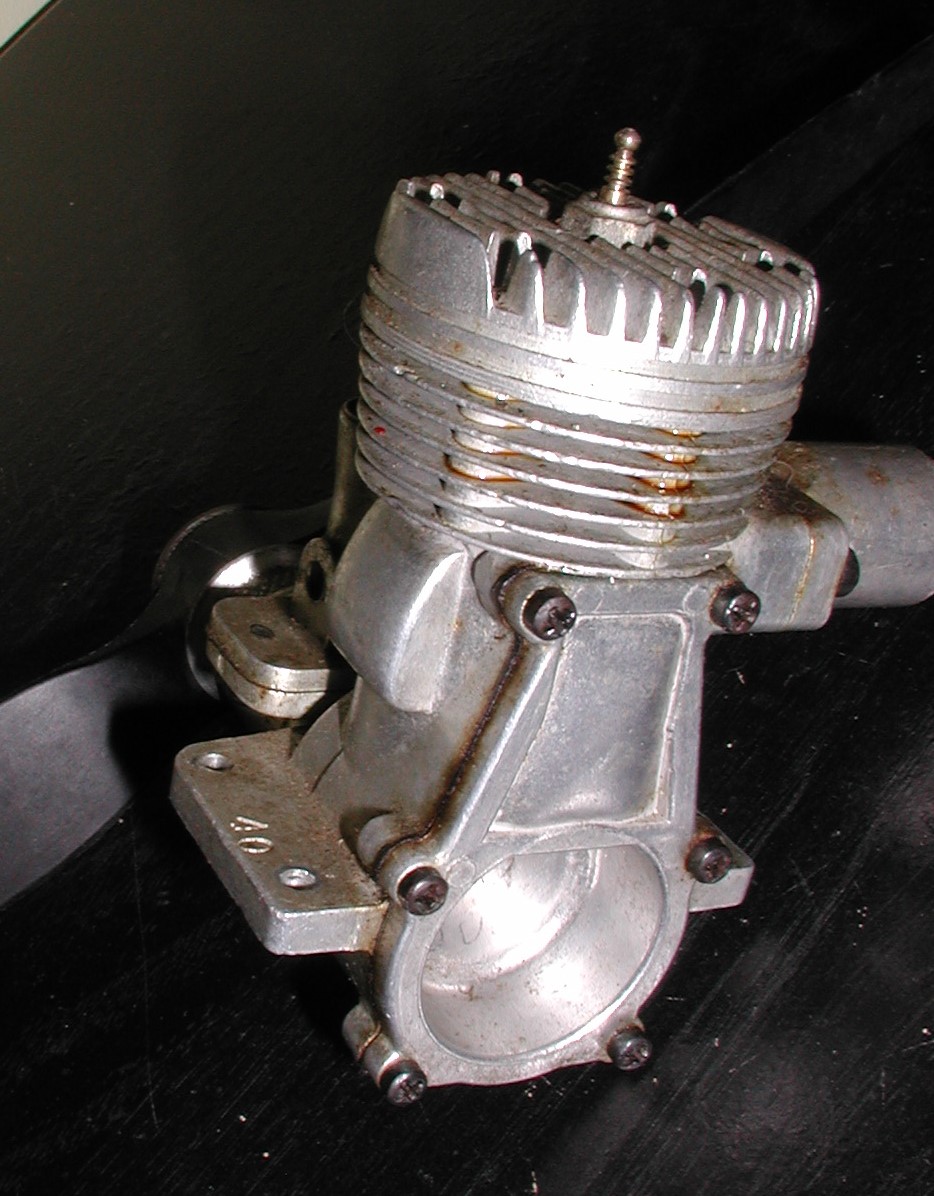 My heart skipped a beat when I saw the ebay example asking $175. My son paid $5 for this one. Then I saw that it was a ball bearing engine and R/C. The "trumpet" exhaust on mine is unique from what I have found, although it's a bolt on accessory.

I wonder if one of my .35 Enya needle valves would work in it? Bill probably would know the answer.

Bob, I have a NIP Fox needle for that if you want it.

No charge, I’ll never use it.

@Cribbs74 wrote:Bob, I have a NIP Fox needle for that if you want it.

No charge, I’ll never use it.

Thanks Ron, I appreciate it. PM sending....

Sorry I cannot be of any help in the ID of this engine, but I have to ask. What is the 'bump' near the top on the right side for?

It is a first generation B case Fox 40.  It is definitely not a racing engine or an Eagle!  This case was used for the 40 and 45.  All 40s were stamped 40 as is yours.  45s had no markings.  Many variations were made from this case.  Besides the displacement, there were twp basic styles, bushing main bearing and ball bearing mains.  There were RC and CL versions of both.  The BB version had a large front housing, see the picture.  CL versions came with sport venturies suitable for suction running.  There was also a large bore carb with a combat special needle valve assembly.  Any of the aforementioned were available in lapped or ringed versions.  Most of the bushed engines had the knurled prop driver, while the BB engines used a steel prop driver.  These were Duke's first large bore designs.  They used a one piece head, not a button and clamp design as on later versions.

The wart on the bypass allowed fuel to flow into the schnuerle boost port.  This design was improved and was still made when Fox shut down.

All of this information and more is in Tim Dannels American Model Engine Encyclopedia, 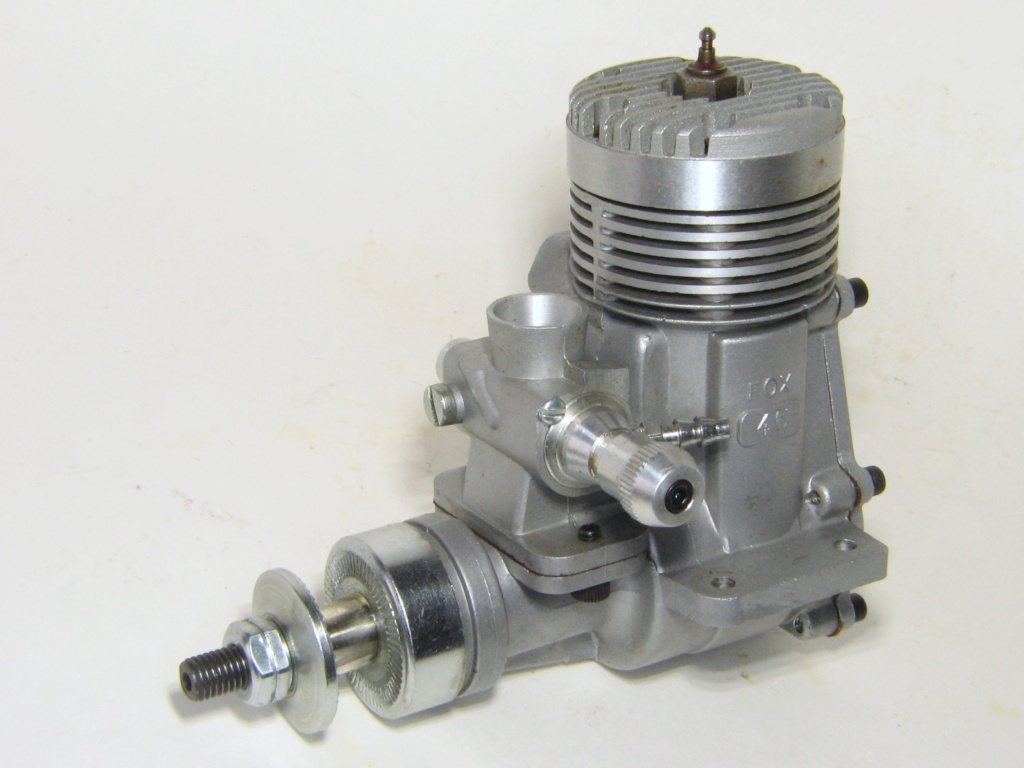 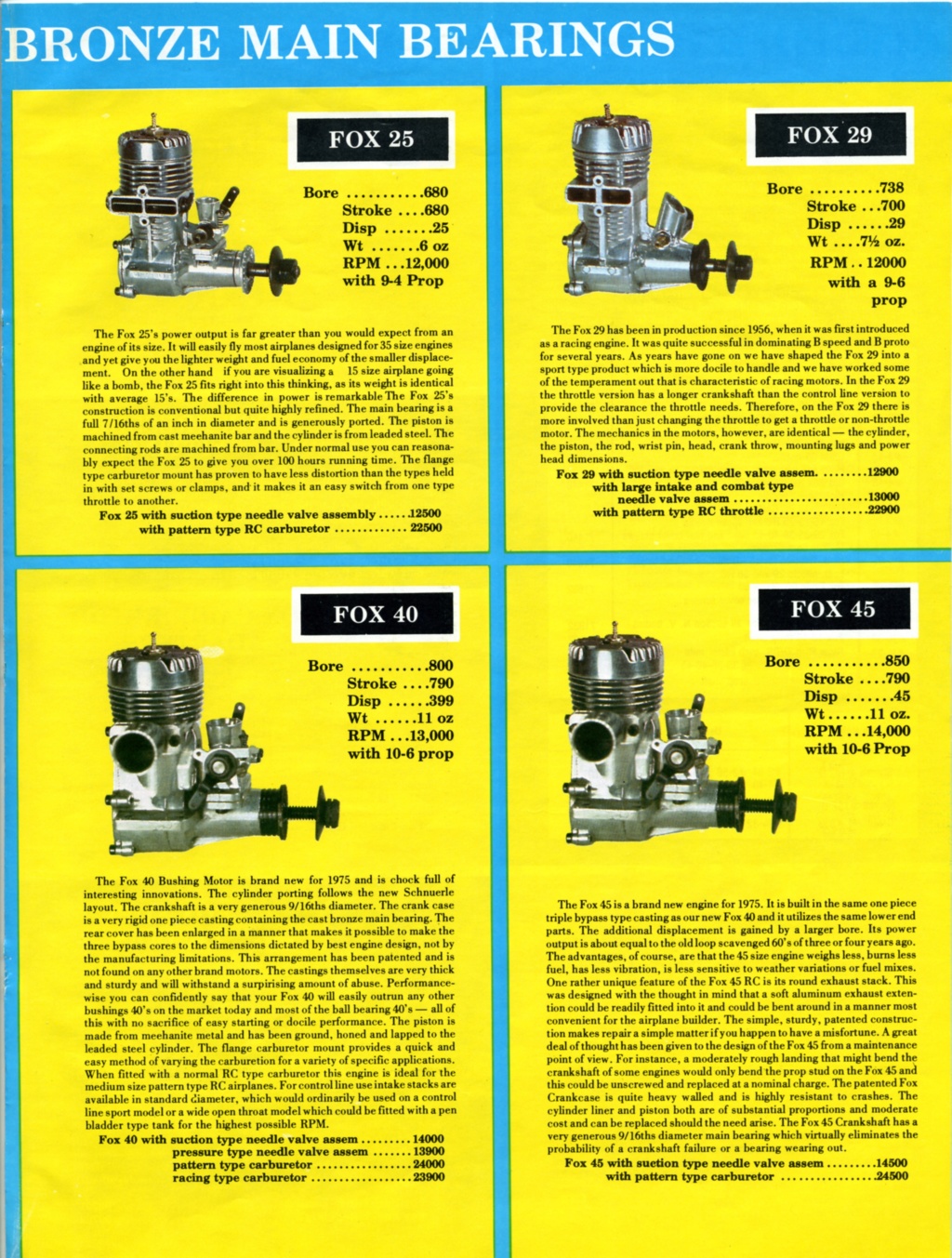 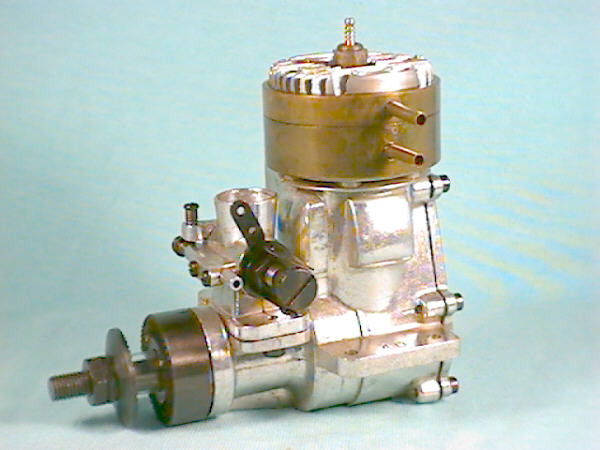 i tried the Fox Q500 engine back in the racing days, it was as strong as a Rossi, but not even close to the Nelson or Jett engines. Also, had a .50 lots of power but could never get carb dialed in, always had a slight hesitation.

Thanks Bill, I knew you would come up with the facts.

So Fox never cast any identification into the case, not scrubbed like many Enyas that I have seen. Unusual but not unprecedented. I don't understand the knurled prop drive, an added manufacturing expense that the proposed cheap Duke Fox would not condone. Starter aid, aesthetics?

Funny, these engines keep showing up. Another Fox is coming on the slightly bent ebay Racer. I had just one that I had forgotten about, then that .35 arrived with the other 8 flea market engines. Now I'm losing count.