Log in
Search
Latest topics
» ebay "Silver Lining" turned to stone for me.
by Admin Today at 10:09 pm

Well hi there again! So I am out of projects, or stalled out on what I have on the go, so I thought what can I do now. When I went to pick up the LA today I was talking to the gentleman I got it from for a few minutes. During this talk, he was telling me about not using 'AA' batteries in his transmitter and how it caused him to lose a plane. With that said, he told me he just stripped it and it was unfixable and was in the black bin 'out front'. See where I'm going with this????? So I said, it didn't sound that bad. He chuckled and said lets go for a walk. So he opened the lid and pulled it out. Well, part of the fuselage. One half of the wing followed by the other half of the wing. Then the landing gear, and finally a few other smaller pieces. He said to take it if I wanted it, and also I would be doing him a favor by taking it so his bin was not as full.

With that all said, I came home and lightly trimmed the torn covering away to see what it was really like. I have been very influenced to take on this project by following some other 'trash' finds and rebuilds done on this forum. This will be my motivation! The only thing missing is an engine as it is a 10CC gas airframe, I am hoping the LA .46 will be enough to get it airborne for just a fun flier.

However, I will be giving it a very good 'once over' tomorrow just to see what I am up against before starting. This will definately not be a quick rebuild and be done over a weekend. I will be taking my time along the way and do not honestly plan on having it done this flying season. Thsi will also be put on the backburner if something else arises along the way. Meaning as I am training on my nitro plane thsi year if it needs attention, it will take precidence. Anyways, here is how I received it minus the trimmed covering.

Sorry I forgot the picture. 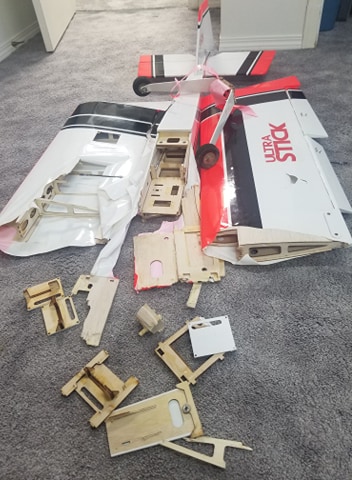 It really doesn't look so bad. You could buy a styrofoam wing for starters. Looks like the tail feathers are okay. Are you going to rebuild it as RC or C/L?
_________________
Don't Panic!
...and never Ever think about how good you are at something...
while you're doing it!

Will be going back as RC. Can't wait to start it now.

It would be great if you'd log your rebuild with pictures, I'd love to follow your progress. It doesn't look all that badly broken up, more like it just RUD'd and came apart.

I've repaired worse that was left in the flying field trash can. Should be a fun rebuild.

Rusty has a great idea with posting a rebuild log. Is there a center section of wing missing or do you have the full length wing. I agree with the others, it looks quite rebuildable.

When I do get rolling, I will try my best to remember lots of pictures along the way and a what I did guide. Will hopefully get some better pictures tonight.

And thanks Eric for the idea. Still new to this nitro rc thing, so will start keeping an eye out for an engine for it along the way. Heck, I'll keep my eyes open starting now.

Always gives a good feeling to rebuild something that someone gave up on. Go for it and bring along a camera.

I rebuilt the fuselage of my Twist after it did a cartwheel. It looked about like that one. I added a doubler because it was just over engineered for lightness the way it came. The wing looks kind of like a tossup for rebuilding or new. I would probably start fresh and use the old rib as a pattern. At least it is not a tapered wing. Maybe a .46 is small, but the LA .46 is as strong as most ball bearing .46s and lighter. You could maybe leave off one set of ribs to make a shorter wing for the smaller motor, and those flaps are much bigger than needed for a beginner. I had to tame my Twist down to almost no throw and it still rolls very fast.

Ok. So as I stated earlier, this will be a slow project, but the wheels got rolling today. Going to start with teh wing just so I can see if it will be salvageable. Just sorted out pieces I have for it. I started by gluing the wing hold down block back onto the one side of the wing using wood glue and clamping. Going to let this sit and cure tonight. I am not sure where I will go from here. Whether to join the wing together, or repair the ribs that need attention. I am leaning to repairing both wing halves before joining as it will be easier to work on them when in two smaller pieces. 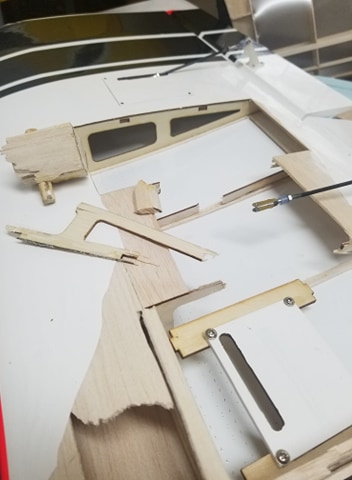 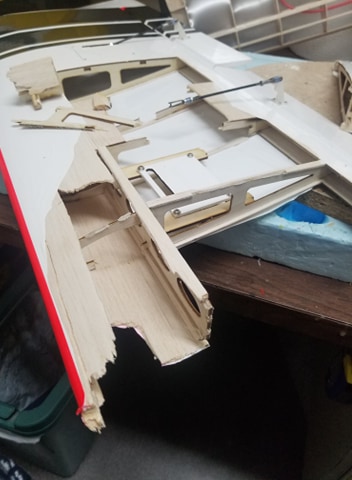 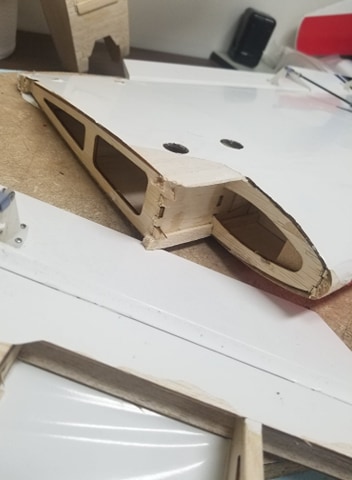 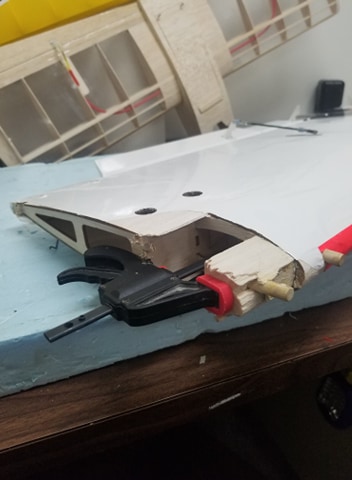 So just a little update... if you ever find yourself in a similar situation like this please take note of how you clamp things. Make sure you can get your clamp back out after you are done clamping.... I had to cut the wing open more so I could disassemble the clamp to remove the darn thing. And this was only the first step! Lol.

Grenie for clamp removal LOL sounds like something i would do

Well, not much, but I got the remenants of one wing rib glued back into place and drying as I type this. Been busy working on a couple of engines for a local fellow but am now at a stand still with them, so back to my plane. 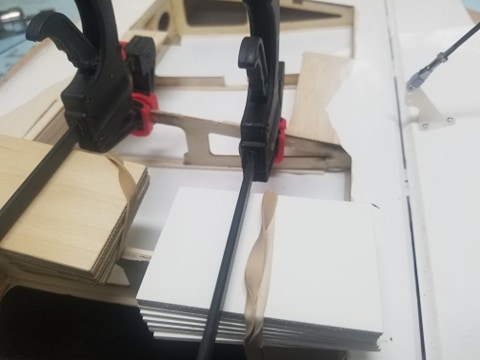 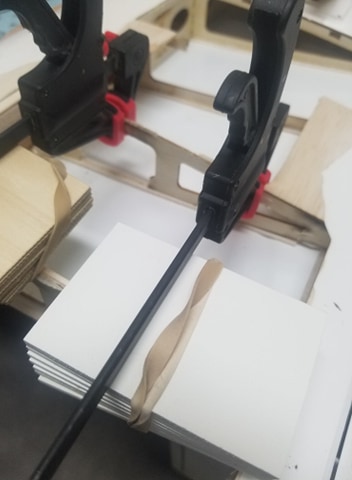 getback wrote:Grenie for clamp removal LOL sounds like something i would do

Double greenie. That is definitely something I would do.

Todays little rib glue-up. Currently drying. Then will continue along with the next parts of teh wing. 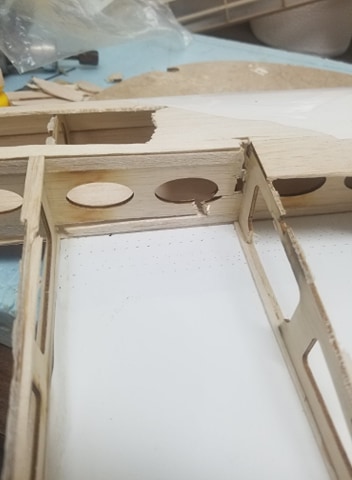 While this did not appear to be overly terrible, I just got back from doing a couple more small things to it and had noticed something. I was just playing around holding the wing back in place with both halves together. There must be some more major hidden damage under the covering somewhere. The wing halves did not join up nicely at all, and appear to be some sort of a twist in it, or as I suspect some more major damage hidden that I cannot see. So I will take one more good look at it before making an ultimate decision on whether or not to repair it further or to remove anything good from it. This was rather disappointing to me when I found this out. I had actually started to play with the fuselage repairs, just to see how bad it was as well. It may look worse, but after finding this out, I think it may be better than the wing.... Will update this as I investigate.

Shouldn't be too tough to build a new wing having the old one to go by. I think I would have done that to start with rather than glueing broken pieces back together!

It's amazing after you cut off covering and saw off the shards, how much more doable the repair appears. I've had planes sit for a decade+ in pieces just because it looked so bad.

Thank you. I have not given up just yet! Just glued the wing together and is clamped drying and will re-evaluate teh situation again when it is dry and I will also strip off some more covering to see what it might be. Thank you.

Keep at it Chancey, I'm following your progress closely. In the words of a famous person, what the H... do you have to lose...….

Chancey , what is the wing overall length ? ( with it put together best you can ) Looked to me some of the center was missing , and don't look to join correctly at all .

Sorry I have not been good with pictures. But will add them now. I have not given up yet. I had glued up whatever I was given with it when receiving it. I have been also reinforcing both sides of the repairs with scrap 1/16" balsa glued over top with wood glue. The biggest part for me was going to be the servo tray/mounts for the flap servo, but was fortunate enough to find a splintered piece that did in fact have the tabs for locating it all properly. After that, I had then glued teh sheeting around it as was done from factory, and as well, I found most of it in the scrap pile.... So I will now attempt to put some pictures here in somewhat of an order so they kinda make sense. 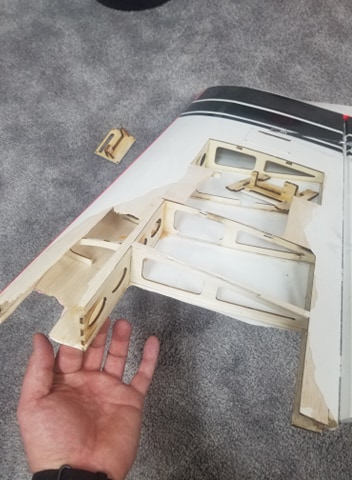 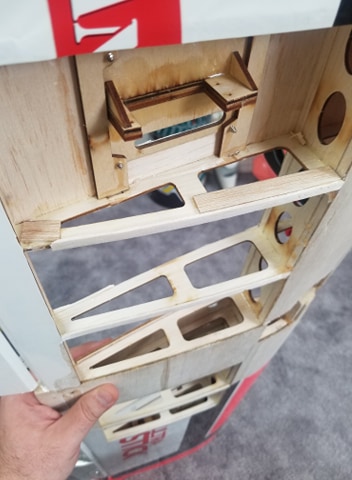 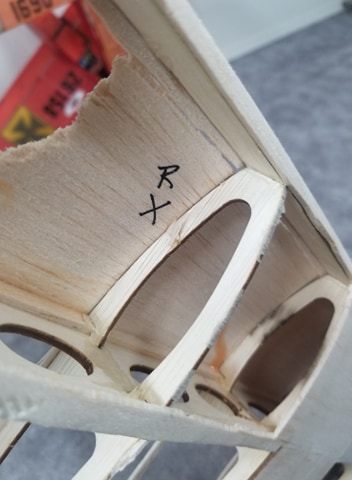 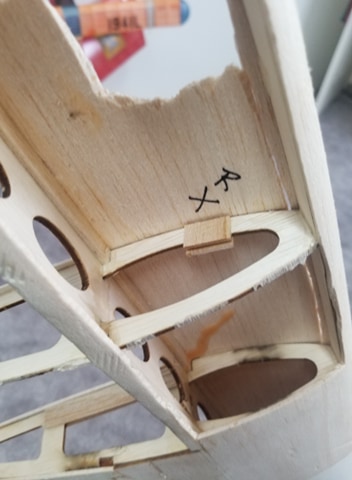 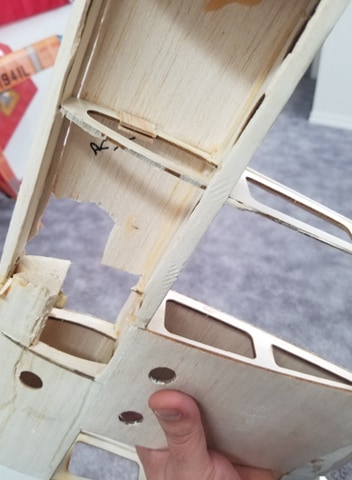 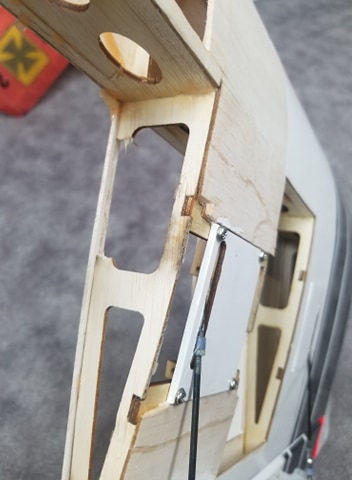 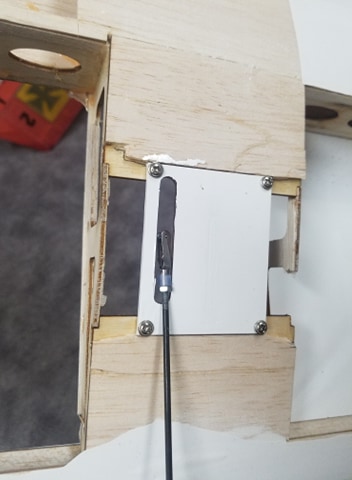 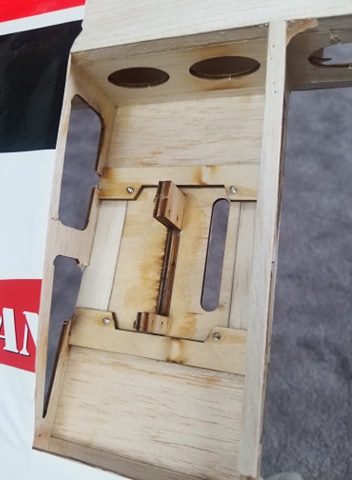 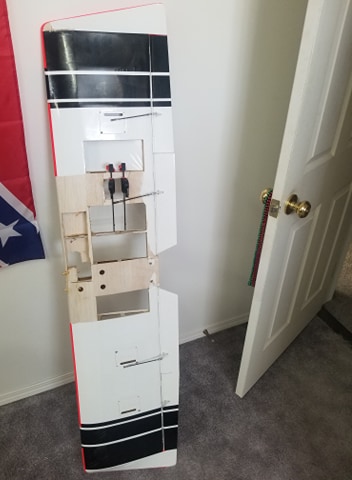