» Can I sell non Cox/Thimble Drome items on the forum?
by Mark Diedrichs Today at 5:14 pm

I believe these are quite rare and I was lucky to find this on eBay UK. I paid €35 for it. A lot of cash I guess when compared with the original price which would have been just a few dollars!?

I have some ideas on how I might R/C convert the Pee Wee. I shall post those on a different thread in the hope that members will: comment, advise or criticise! 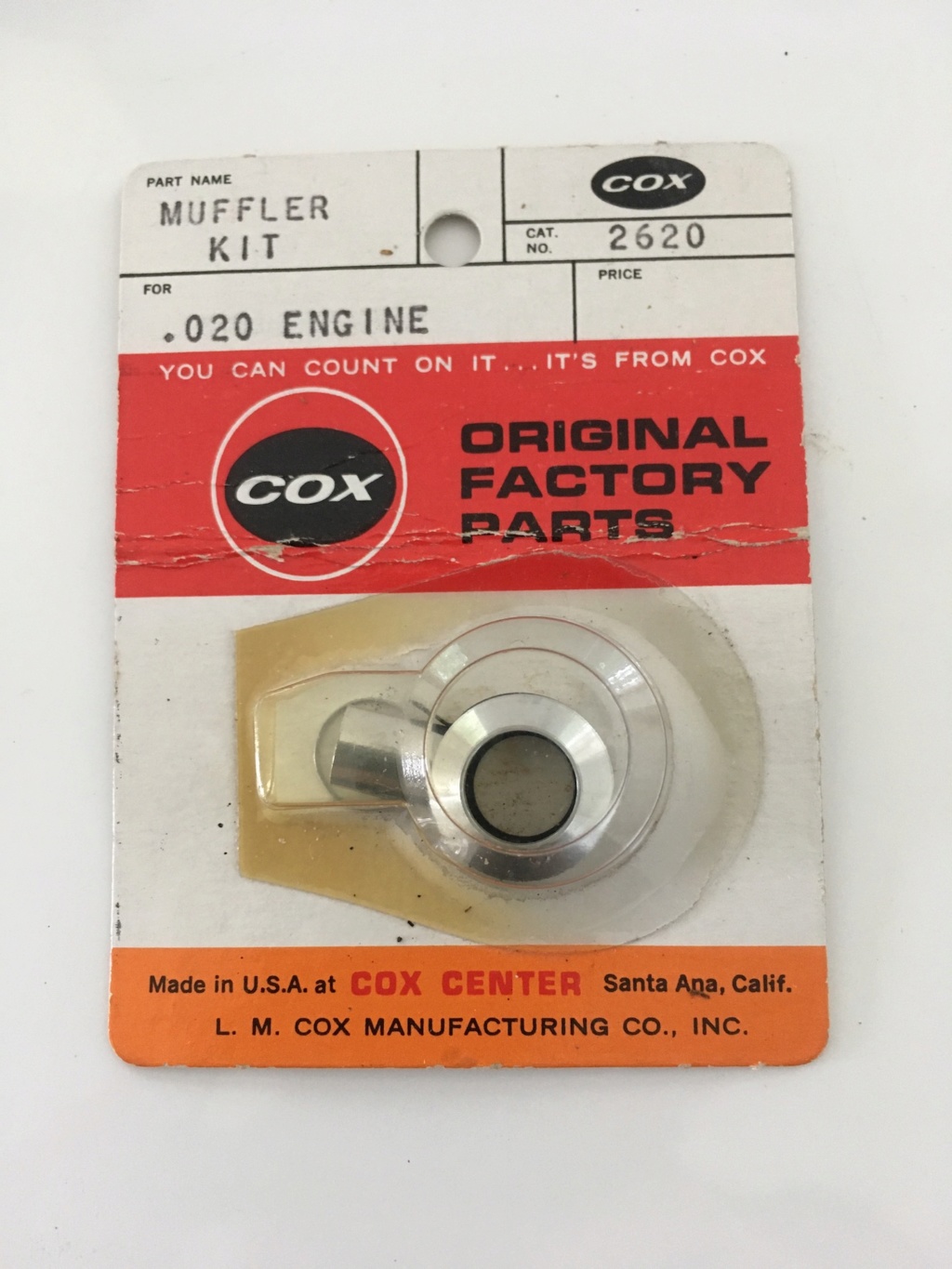 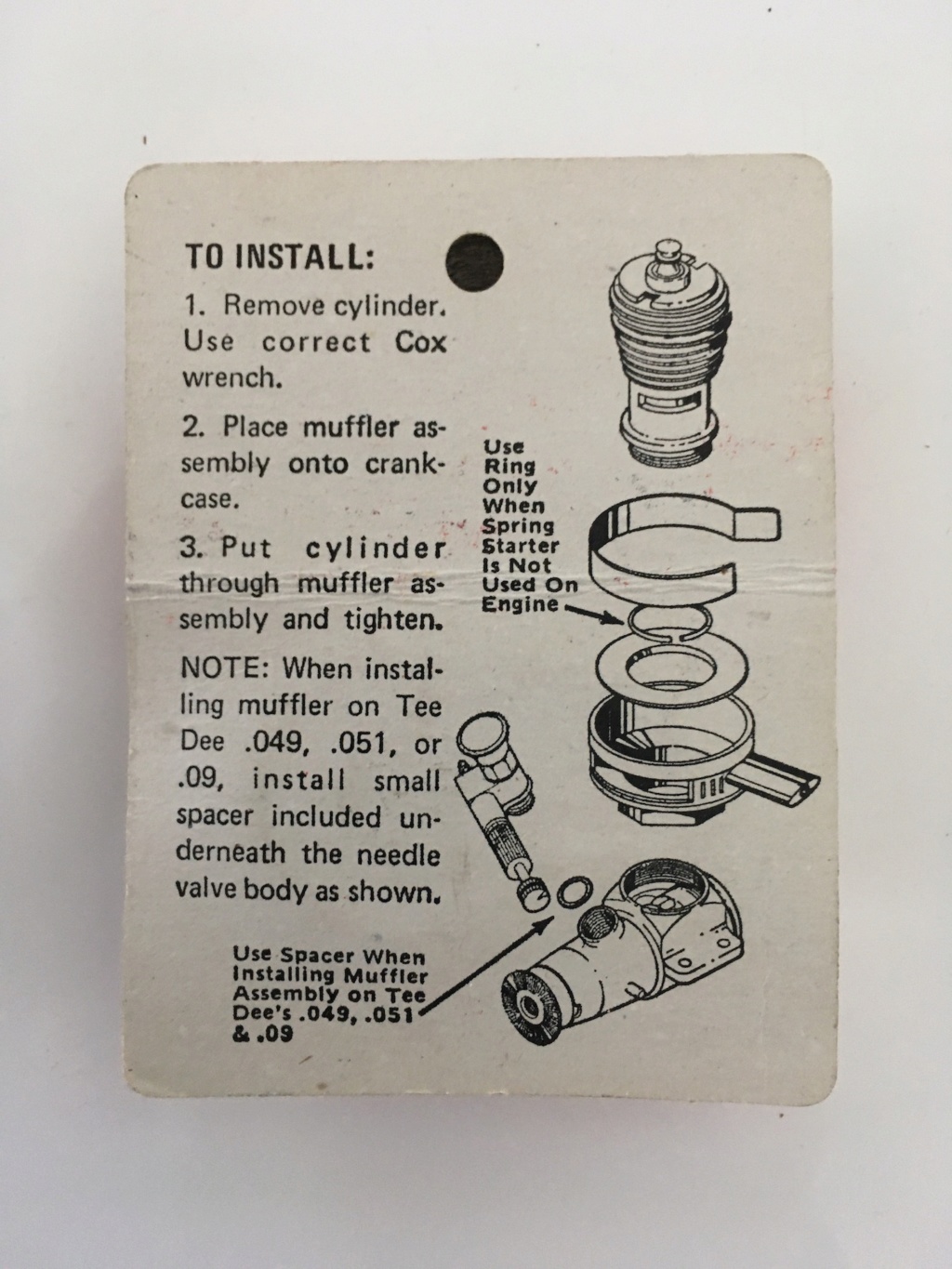 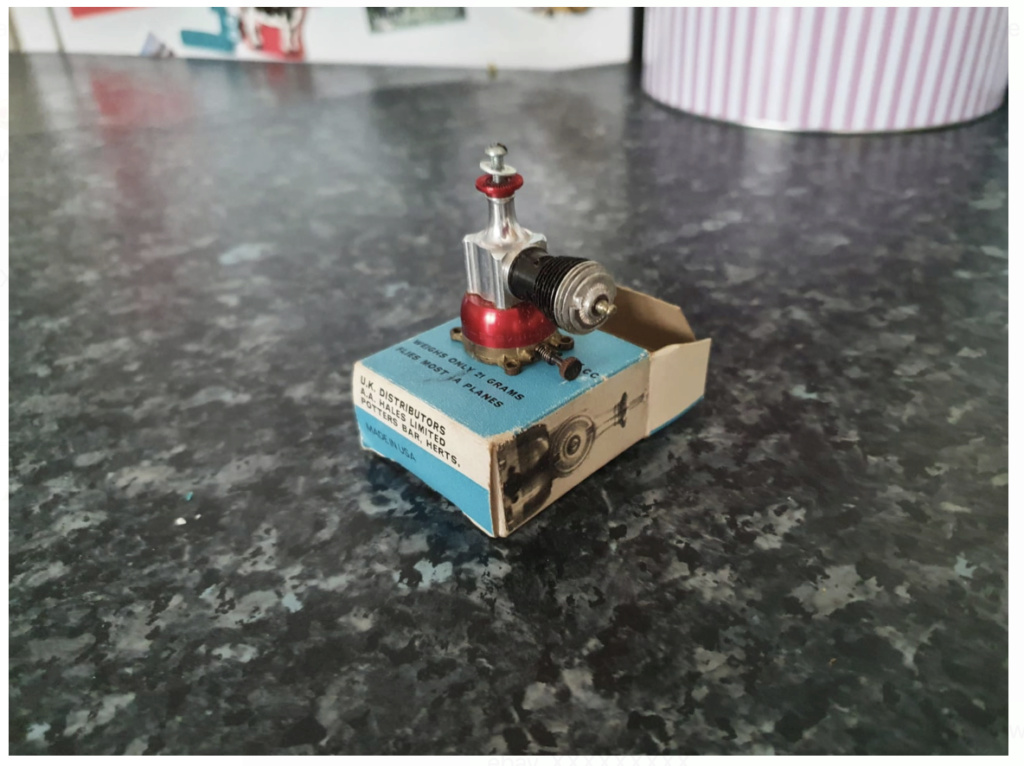 If I had the dilemma of using or shelving it  I would say the pro is the aesthetics because the tiny PeeWee looks really cool wearing that lil muffler.

As for the cons, I have used these mufflers on 049-s and 09-s and would say they are less than perfect in noise attenuation or castor sling control. Because your PeeWee is a Sub Piston Induction engine the muffler may also rob a few 100 rpm-s. Another concern is that if your cylinder top fin is not milled for a wrench then removing the cylinder with the muffler on will go only the unorthodox way by using a plier and a mandatory leather belt wrapped around it,  and this is not what you want to do in the first place with your antique PeeWee.

. Your PeeWee will be tons of fun without it.

Sorry for casting doubts on the illusions.

What works best on 020-s for RC engine speed control is the exhaust throttle sleeve that allows stepless rpm control with low idle and does not rob power...the missing flats on the top fin of cylinder for the wrench remains an issue though..some reckless members here managed to cut those flats on the fin with a dremel cutter..I would probably mess it up so I have never tried.

I have many antique COX engines without those flats milled and I spray some silicon oil on the cylinder thread before reassembling the cylinder in hopes that unlike castor, silicon oil will not cake between the threads and the cylinder remains removable without high torque when using a plier plus leather belt, after heating the crankcase.

Thanks Balogh and 1/2A Nut.

Hi Balogh.
Budapest is where my wife, my daughter and myself would have visited this year had it not been for Covid-19. We planed 10 days of canoeing, hiking museum visits and lots of beer and food! Next year with luck!?

I was hoping to find the #281 exhaust throttle for the Pee Wee but had no luck. I thought that I might be able to use the muffler for a similar effect by putting a small hole in the peripheral spring!? I have been experimenting with home made exhaust throttles on the .049. I don't have any machine tools so it's done with hacksaws, files and a Dremel. I throw nothing away and found an old Husqvarna 65L oil tank plug and two 10 thou. shims. After some dermal work, hacksawing and filing I made this test unit. The flange will enable me to drill holes so that the ports align. The bottom shim is opened out to the cylinder thread size. (Some loss of compression, SPI opening and transfer opening) The upper shim to the cylinder OD and it is kinked to act as a friction device. 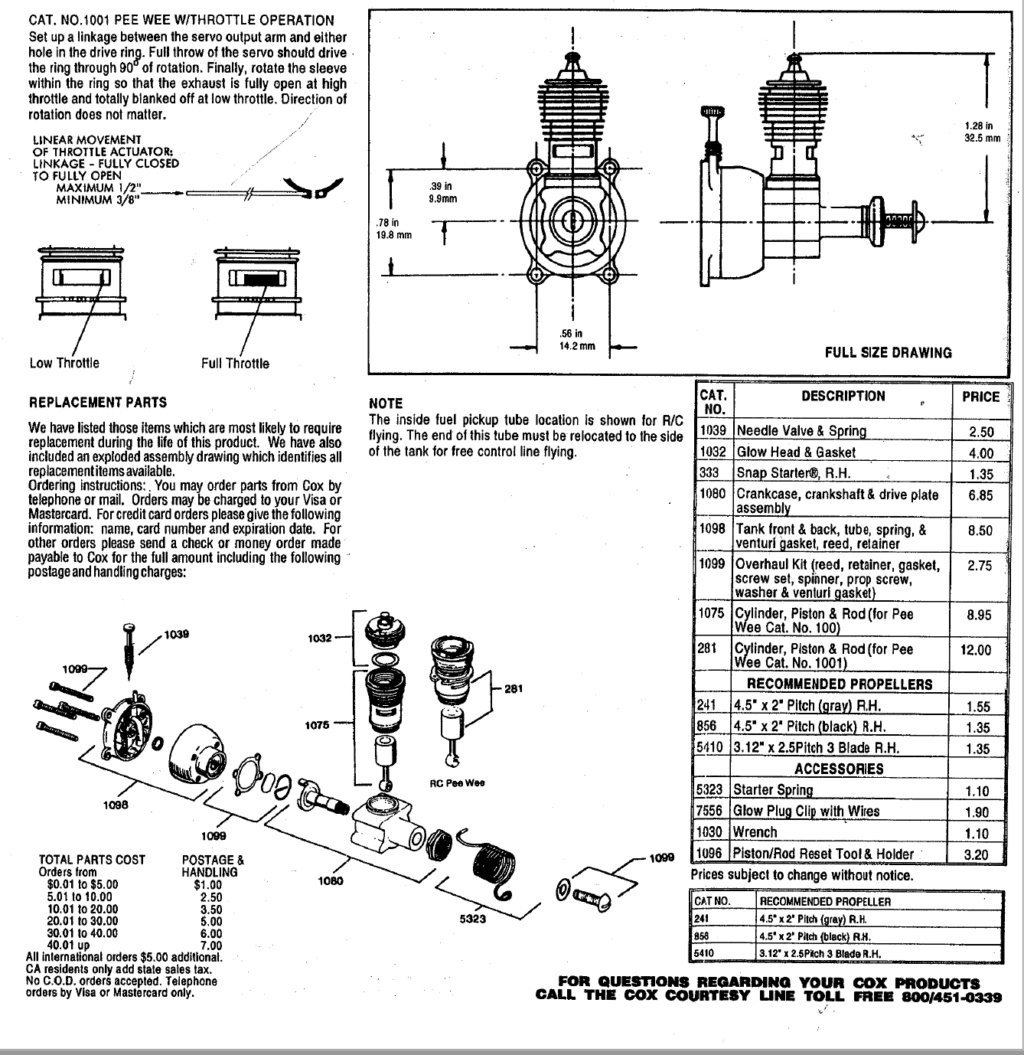 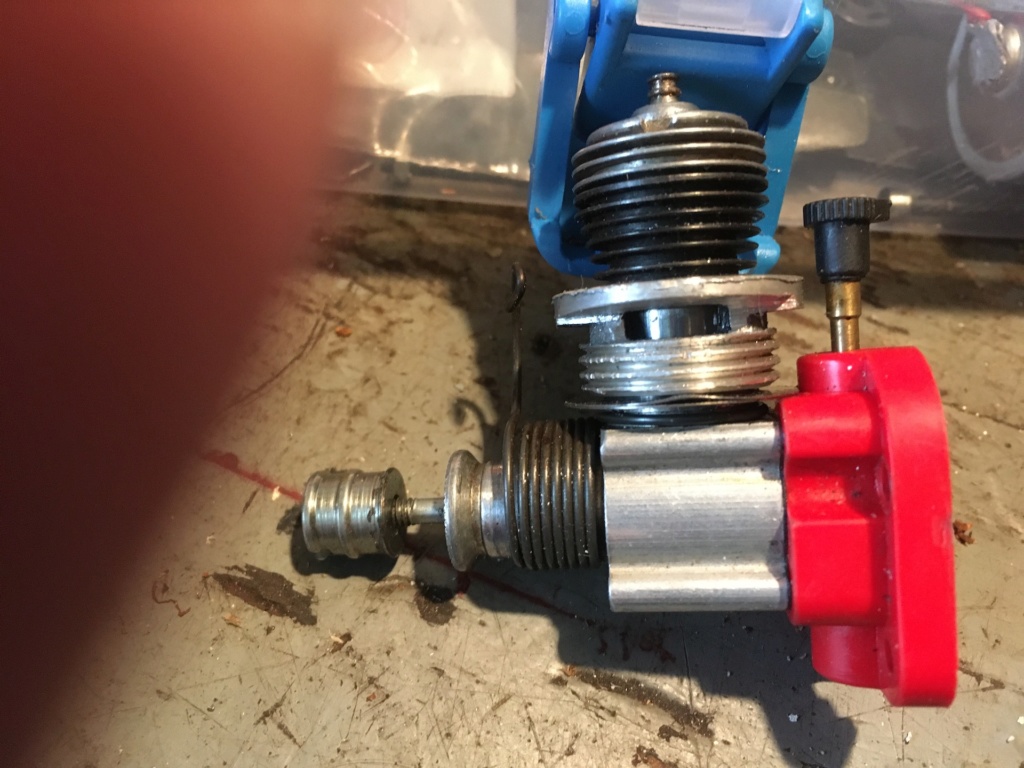 Your point about tightening the cylinder is very true! I shall have to make a tool to work on the OD of the fins. I made a tool for the glow head as I think the Cox tool is a bit thin! 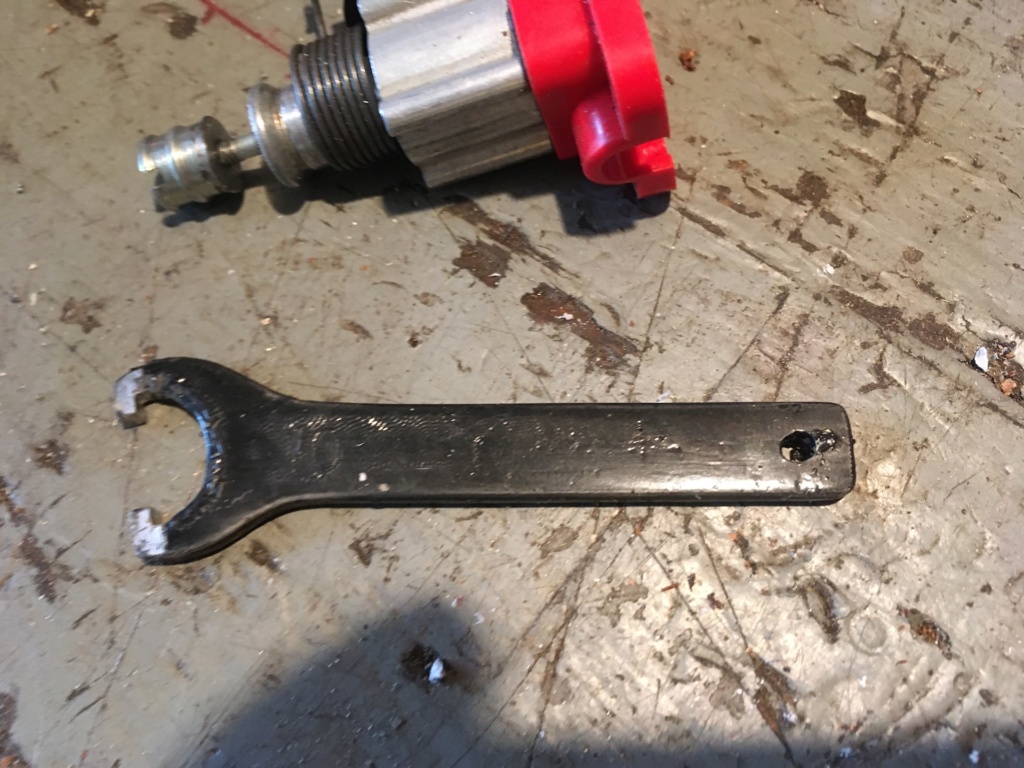 The top image is obviously your conversion, is the second image yours as well? If so, very nice. Where do I find a GMark 030 carb? I was thinking of utilising a .049 R/C throttle and adapting it to the Pee Wee tank backplate. I am trying to find a spare back plate right now. 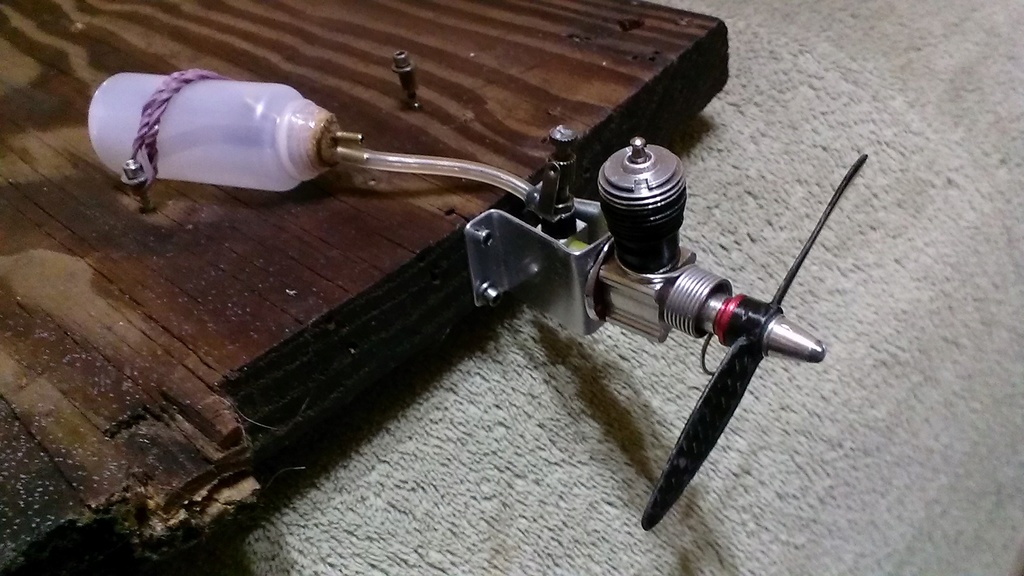 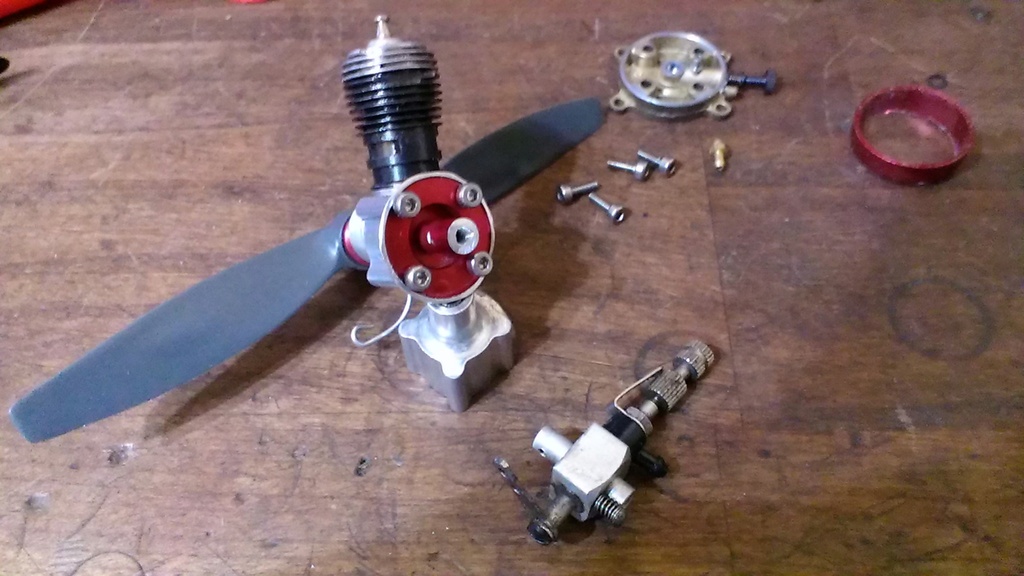 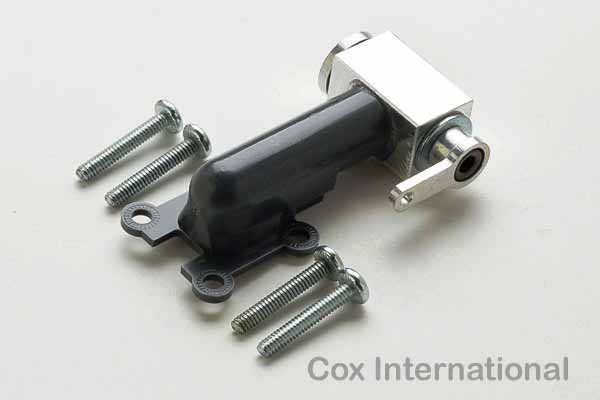 Hi Daligh, too bad you could not make it to Budapest this year...

Regarding the PeeWee muffler, that design is not made for an efficient  rpm control in a measurable range. It does not seal so well even if the ring completely closes the opening on the housing. You will see castor oozing everywhere from it indicating the lack of seal, whereas you need very good seal between the mating surfaces for a good throttle control.

About your 049 exhaust throttle made of the Husquarna aluminum (?) plug, it will work well if the cylinder outer dia is just a bit smaller than that of the throttle, otherwise it will not choke the exhaust flow well.. Chances are the aluminum throttle ring will expand more than the steel cylinder and the fit between them loosening when the engine is hot.
You also need to make sure the throttle sleeve cannot move too much up and down. Not just to keep the openings aligned. The lowermost cylinder fin tends to break free at its root if the throttle vibrates during engine run..have a few cylinders with that fin dangling free on the cylinder. So your upper shim kinked a bit to keep the throttle lightly  pushed against the lowermost fin seems to be a good idea unless the friction is excessive and the servo is overloaded.

This type of throttle is sold by COX International abd Exmodelengines:

I am also not quite well equipped with tools but this can sometimes make our hobby even more fun!

Yes the other pic I took, shows my conversion approach.
You have to buy an old G Mark .030 and rob the carb.

Balogh.
Thanks once again.

Regarding the aluminium test throttle:
The fit is close and leakage probably no more than the Cox unit. I hope to reduce differential expansion of steel/aluminium parts by leaving the threads on to help keep the aluminium cool. The kinked shim helps with vibration and keeps the throttle tight up to the lower fin. I believe that the friction is not too high! A phosphor bronze shim top and bottom might help reduce friction!?

If I could find a #281 throttle I would not be doing this!

Great idea finding a GMark .030 but I think that might be more 'Hen's Teeth' like than finding a #281!? Plus your superb modification look like they require machine tools to make a perfect job of the conversion.

There are some interesting prices on the sheet! 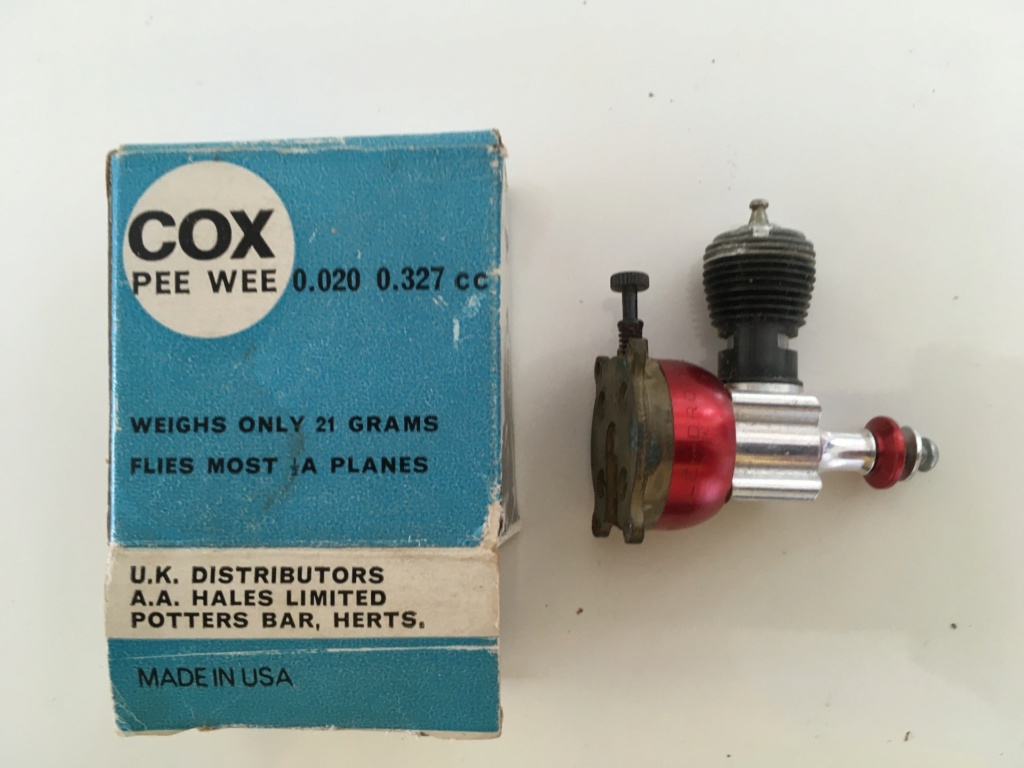 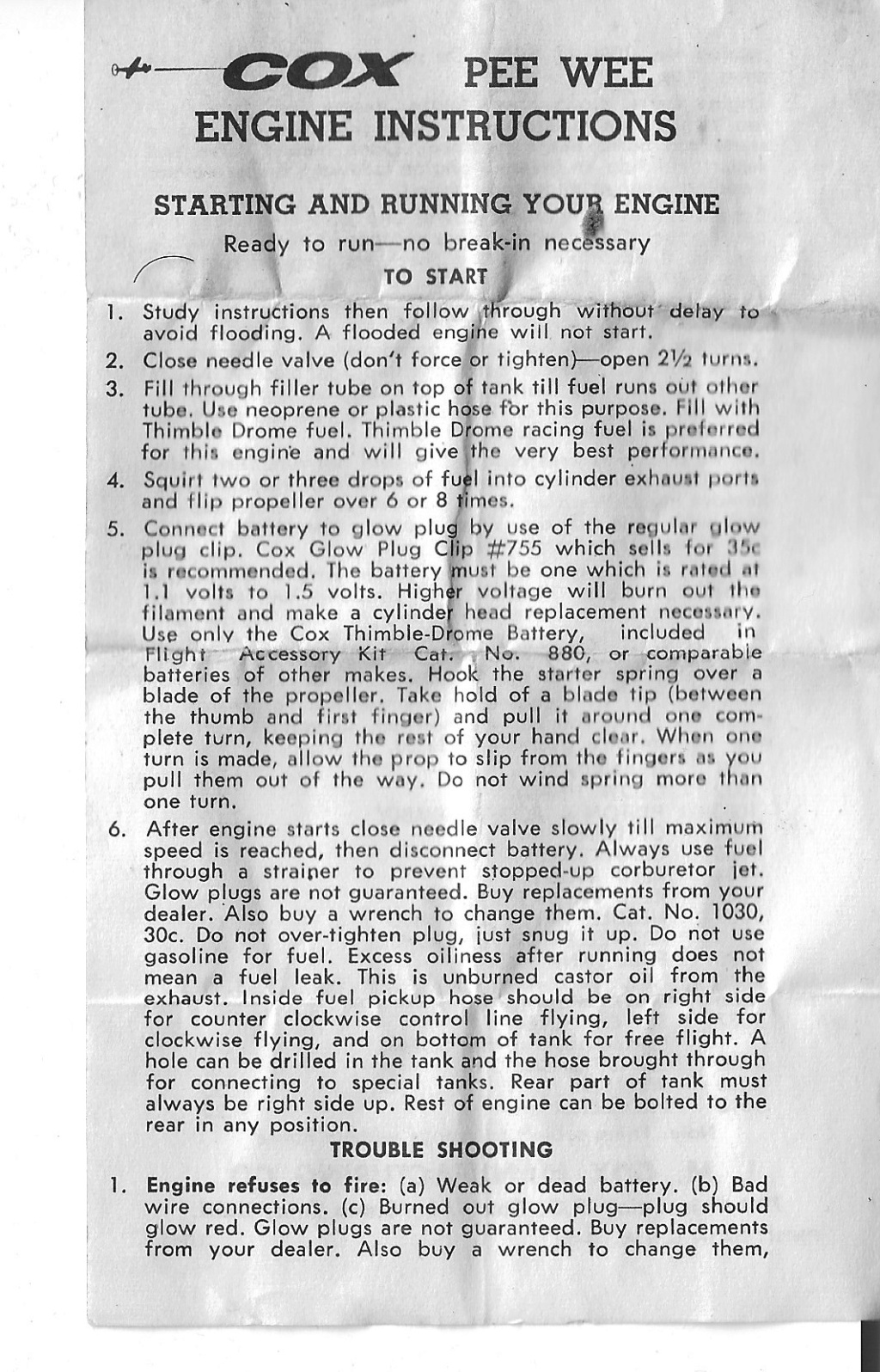 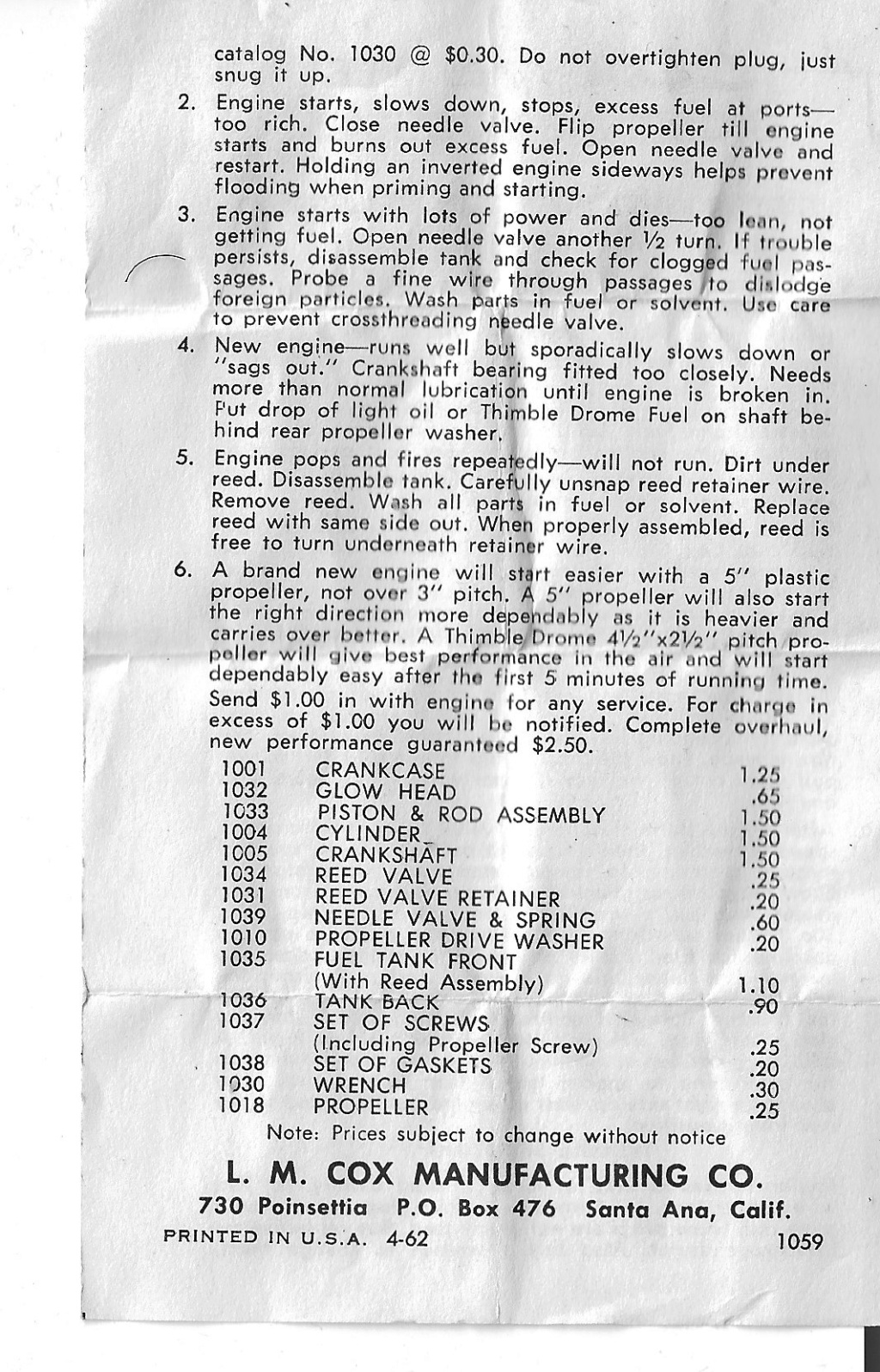 balogh Yesterday at 3:44 am

as the COX cylinders evolved, first thin wall cylinders with a small flange at cylinder bottom were made. Later productions with a new machinery brought about the stepped wall, and finally the thick wall cylinders. The latter 2 will fit the exhaust throttle, but the first will not, because either the small flange will not allow a single-piece exhaust throttle to slip on the cylinder, or, if the throttle ring is big enough and slips over the flange, then it will be too loose to throttle.

You may want to check your PeeWee cylinder if it has thin wall and the bottom flange, that will not match the throttle ring even if you are lucky to find one on ebay..

balogh Yesterday at 3:46 am

the Instruction sheet shows a Litho mark 4-62 meaning print version is  April 62 which dates  your engine back to 1962 or later..I see the cylinder is probably the thin wall with the flange at the bottom...these were made in the early days at the old, Quonset Hut facilities at Poinsettia in Santa Ana..I visited the place 2 years ago:

the Instruction sheet shows a Litho mark 4-62 meaning print version is  April 62 which dates  your engine back to 1962 or later..I see the cylinder is probably the thin wall with the flange at the bottom...

You really are good at this!
I now know about 'Litho Marks'! Yes it's flanged, but a #281 Kit includes cylinder and piston as well as the throttle so one lives in hope but again I believe it might well be another 'Hen's Teeth' rarity!?

balogh Yesterday at 4:02 am

I am afraid the 281 set only includes the cylinder, piston and rod, at least this is what I read from the parts list in your post above....these throttle rings were sold separately as far as I know..

balogh Yesterday at 4:11 am

Yes, Steve of Selecthobbies sold them with thick wall cylinders. I thought you meant the COX factory part list where the cylinder/piston combo has the same or similar (a bit blurred on your photo) parts number.

Some folks here made the ring for the thin wall cylinders with the flange at the bottom too, with the ring split into 2 halves and the clip ring holding the halves together, I am not sure if that seals as well as it is required for an efficient throttle.

Thanks for mentioning the split throttle cylinder. I had already thought about this option. I have a lot of different size steel tubes in my barn, that I have collected over the years. Some are from small gas struts and may suit! Trouble is that they will be metric and the Cox will be Imperial sizes. Having said that I put my Imperial micrometer (my first apprentice tool 1966 before the UK sensibly converted to metric in 1968) and it measures .386"(.980mm)! What a weird imperial size but perfect if I can find a 10mm bore tube! 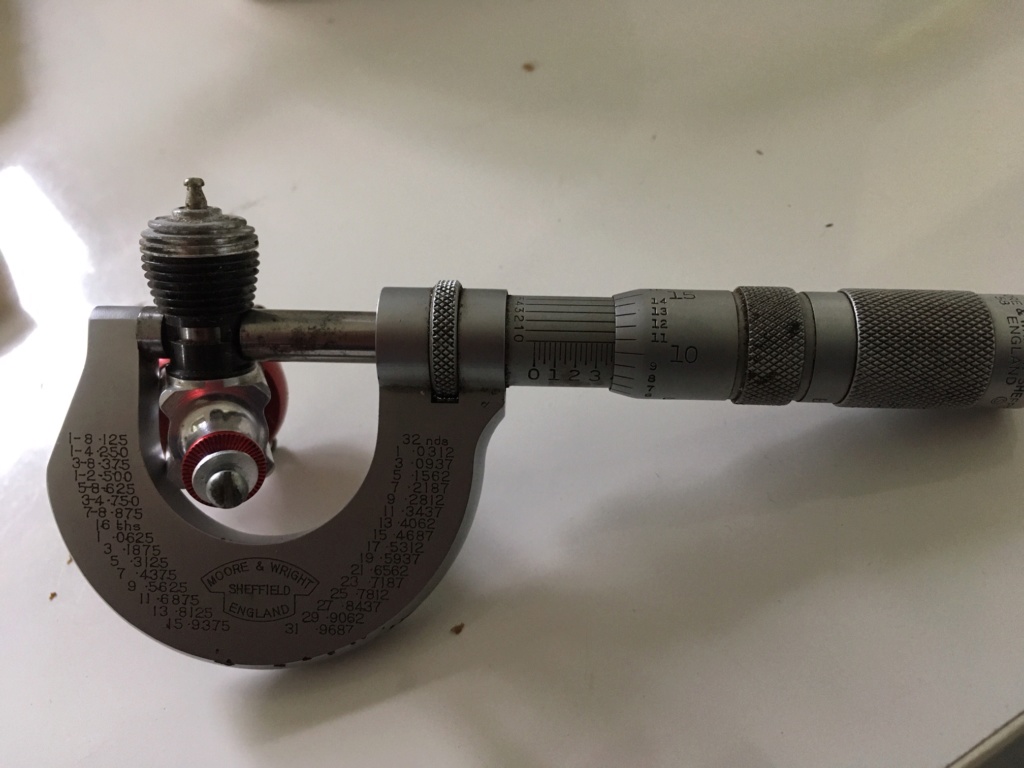 Just spotted your photo of Poinsettia and thanks for posting it. I guess you edited it in as I missed it before. You must be an uber coz fan to go all that way!?

So I found a length of 10mm bore tube from a gas strut. It has a 1.5mm wall and so is 13mm OD. I found a few 12mm circlips as well.
So. I shall cut two lengths so as to make a tight fitting pair. I shall then cut a groove .5mm deep by making a jig to rotate the piece under a Dremel cutting wheel. 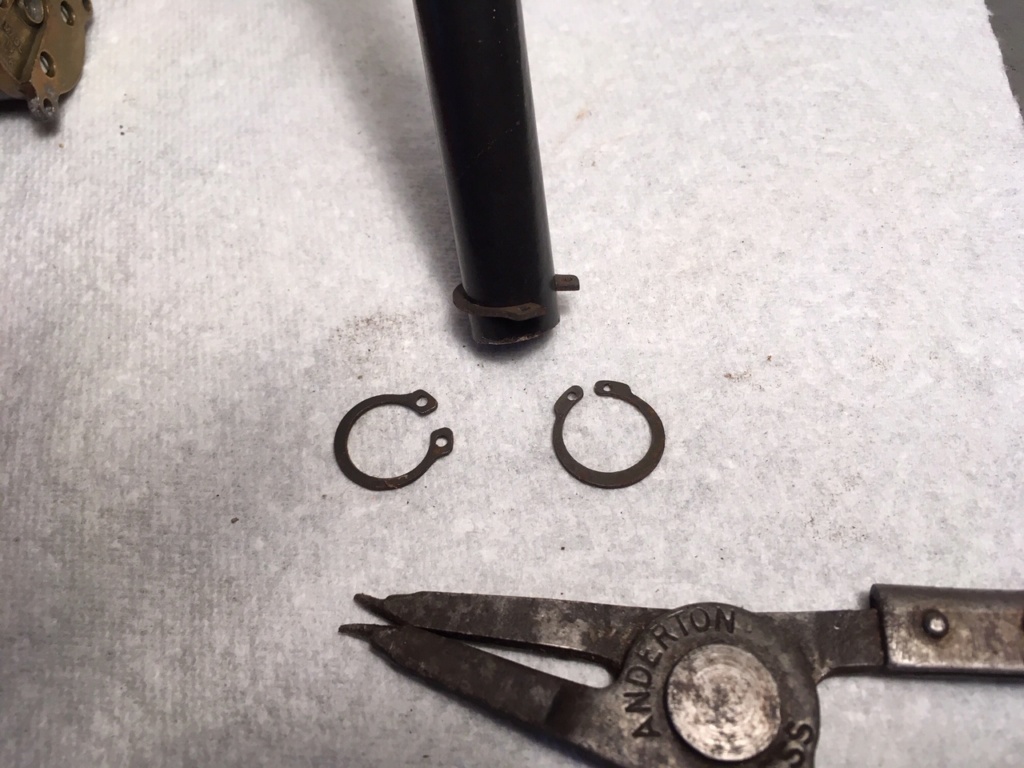 [quote="Daligh"]I believe these are quite rare and I was lucky to find this on eBay UK. I paid €35 for it. A lot of cash I guess when compared with the original price which would have been just a few dollars!?

I have some ideas on how I might R/C convert the Pee Wee. I shall post those on a different thread in the hope that members will: comment, advise or criticise!

Holeeeee…. that's quite the price lol. Until a couple of weeks ago we had a handful for sale and they ware not exactly a hot seller: https://coxengines.ca/product.php?productid=2201

You need to sort your website and eBay listings because when I searched for .020 parts a month ago, that did not show up! LOL 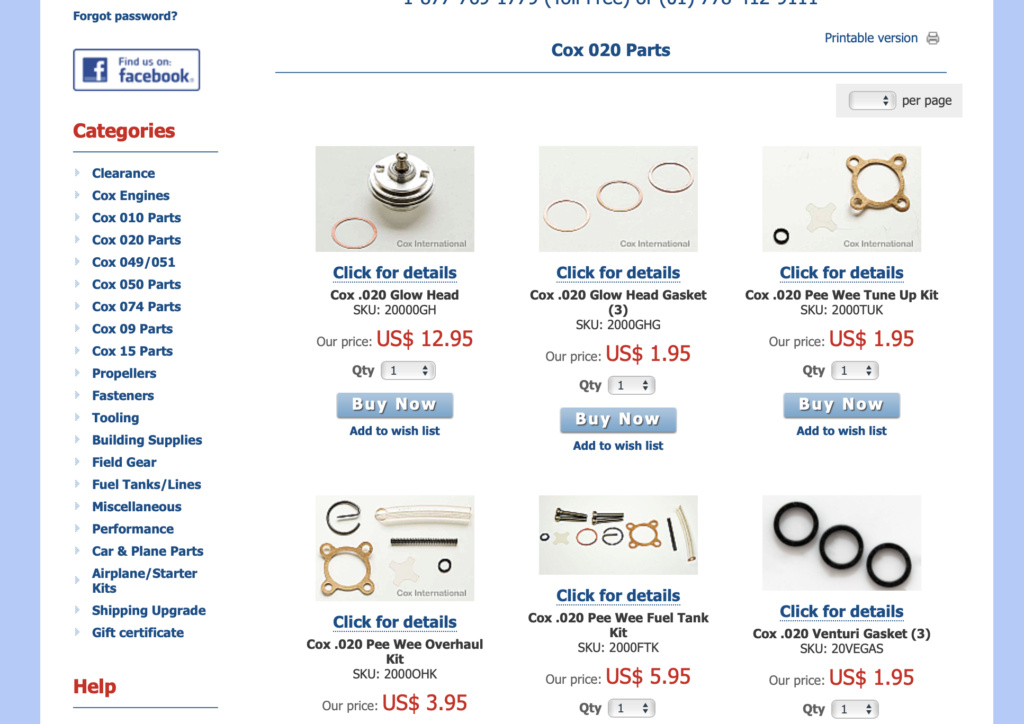 Mind you with postage and Irish import duties it would probably cost as much.
Anyways up. I shall be ordering a lot of bits from Cox.ca in the near future so I want an uber super deal!

What about having some more #281s made? It would save me a lot of time making a replica!