I recently purchased several new Tee Dee 049 engines and had a bit of grief getting one of them started initially. I know there is a lot of built up wisdom on the site and experience as to how best to do things, but thought it was worth mentioning the sequence I went through, as situations are not always the same. My two stroke mechanical background comes from racing Yamaha TZ Two Stroke Grand Prix Road Race bikes in the late 1970s and early 80s. Mixture of reed valve induction and my very favourite 'Piston Ported'. Just like an on/off switch :-)

I flew CL from about 12 years old to 17 years old. Cox engines and Enya. Just flying with mates for fun. Back into it now and loving it.!

I checked over my brand new TD 049 engines and found I needed to tighten the rear crankcase plate on one, The cylinder and head was loose on another and the venturi was loose on both. So its definitely worth checking the basics. I did not take the piston out and use the piston tool on it, but by feel, the piston play and crank play end to end all seemed reasonable.

I followed the instructions and turned the NV to 4.5 turns, ensured the fuel was up to the carby. I know the fuel was good as I mixed it and have bought racing fuels for motorcycle road race and speedway from the distributor for many many years.  25% Nitro, 20% castor, Methanol. Tried starting the engine and it would fire each time I flipped it and then stop just after TDC on the next stroke. Now and then it would fire a couple of times. This went on for much too long and I had another feel of the engine and thought it was tight. Maybe just a lot of close tolerances. Im not into lapping things in and all that stuff, so I decided to take the TD high compression head off and use a standard glow head from my surestart. The engine straight away ran as described in the Cox instructions. I ran the motor in short bursts building up time and revs. I know that is not popular theory but my experience is with a tight engine it can be worth it as long as you get high enough revs soon enough to ensure you dont put a ridge at the top of the bore. Once I was happy with the Engine, its running, and ease of starting, I replaced the original TD glow head and it started and ran like a Daemon!!! What an engine for 049 CC  Incredible!!!  Absolutely wrapped with all of my cox engines but especially the TD 049s.

Gary, I am glad you have tamed then started it finally. The original 049 package includes a supplement instruction sheet advising that a brand new engine best starts with additional head gaskets under the head. By replacing the high comp with a normal head you actually achieved the same result. Once broken in, you will find it with the high comp head a real brute force critter.
I also find all TD- s a marvel of model engines and fly all of them in the 010 and 09 size range.

i didnt know about the original extra Cox sheets, but old hurried pit race bike rebuilds always taught me high compression was not always your friend when starting and running a newly put together engine. Sometimes underpowered but running is better than not running at all, or a short term blow up. Lol.
As always, One thing at a time and you will get there, and boy does that engine go when everything is right!!

Here is the sheet I was talking about. 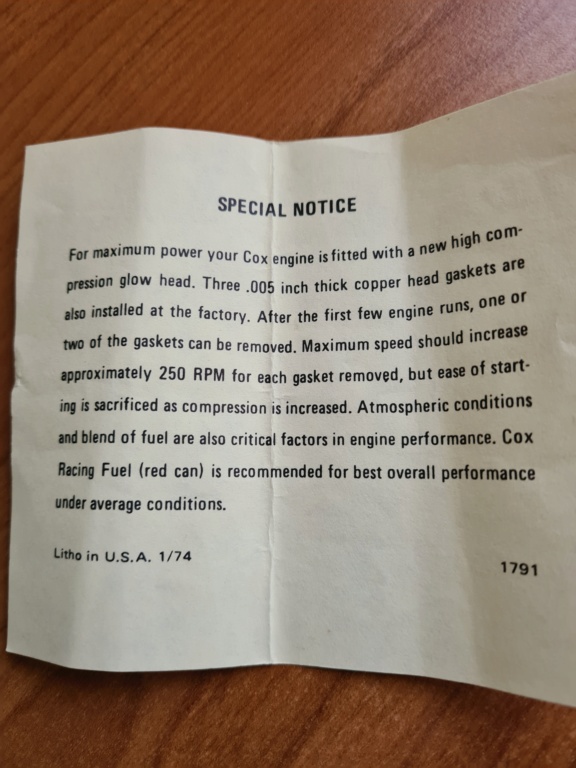 How far do you initially open open one of those fine thread needle valves? I have an un run TD .O49 thats had a lot of mods done to it....glow plug head and all.

Rather than rely on a number of turns which isn't always accurate, open the needle a few turns and put your finger over the venturi while slowly pulling the prop over. Watch your fuel line to insure fuel is coming up the line. If your TD has never been run, your success will be much greater with your tank position lower than your fuel nipple to avoid the tank from siphoning. New engines are pretty cantankerous when it comes to having too much fuel.

Y buy once used tee dee .049 engine that have run all is life wit 3 gasket Recived the engine after test run tinking somting was wrong engine low performance Not Good To me so y take it appart found the 3 head chim replace wit just 1 and after m'y engine run very powerful now tink y like ur way using low compression head To brake in période without use extra head chim