I recently came across the full size plans for the old, Ambroid Whipsaw kit that takes an .09 to a .19 engine. There was a larger model called the Super Whipsaw for .19 to .35 engines. Has anybody in recent years built either of these kits? From the looks of these plans, there seems to be very little room for a fuel tank as the nose is so short ahead of the wing, either cut into the leading edge of the wing and drop the fuel tank into a well. The other idea is to lengthen the nose, or move the wing back enough for the fuel tank to fit. I have tried to post a picture of the plans, but is too complicated for me to do at this time. Eddy

Looking at the original kit plans online the tank resides on top of the wing. You can download a set of originals here:

They also have a downloadable decal for it that looks really cool.

I built one of these planes when I was much younger (about 55 years ago....) I don't recall there being a problem mounting a 2 1/2 oz tank. I don't think it would do much more than a wingover though. Not nearly as aerobatic as the PDQ "Circus Prince" that it replaced. Mine was powered with the steel fin Fox 15.

I have built the Ambroid Whipsaw and still have it. This wasn't a popular plane and I would consider it somewhat of a rarity. My dad built it in "62" and it sat around until the 80's when I finished it. The engine choices were .09-.19. This plane would never fly with a .19 on it at least not well. Your absolutely correct about tank placement. Box art shows it on top of the center section sheeting. This is absolutely incorrect and will not work if you plan on maneuvering. A bladder is the best solution.

I provided Pat King who produces laser cut kits with my Whipsaw instructions and decal. Pat does a beautiful repro of the original and it's 3 times lighter. The original used the ply in the middle of the wing which was a substantial piece. I have the Super Whipsaw as well which is currently powered with a Fox .15 BB and it flies quite fast which is needed for this plane due to it's thin wing.  I also have a 1/2A version that Pat made for me which is designed for a .061. Pat also kits a large version which is for a .46 size engine which I also have.

This is my Super Whipsaw in the picture. https://pdkllc.com/super-whipsaw-ii-110/ I have since changed the tank plumbing as it was using case pressure and I have eliminated that and now am running standard suction.

On the Whipsaw, the best tank option is to sink the tank into the center section by using a longer narrow tank and replumbing the tank with the pickup exiting on the bottom coming out forward.

My Whipsaw flew fine with the somewhat anemic Fox 15. I can't imagine it with a 29! As I mentioned earlier I found it not very aerobatic. I'd think more power would just make it worse. On the other hand the PDQ Circus Prince I mentioned had a considerably thicker wing and flew well with the Fox 15. As the plans stated that it was for class A/B engines I figured my Fox 0.099 should fly it.

Might as well have bolted a Babe Bee to it for all the power the Fox had. Fortunately the beam mounts on the 0.099 and .15 had the same bolt spacing and I was able to change engines without any surgery on the airframe.

I have to admit seeing a Whipsaw after all these years was a nice surprise.

The regular size uses the .09-.19 while the Super Whipsaw uses the larger engines. It's not the power that makes it fly poorly, it's the weight in the nose. A steelfin Fox is extremely anemic.The later angled plug Fox .15X would be a good choice as you can really turn up the rpm's. The Whipsaw needs to remain light due to that wing and a TD .09 would be a good option for it. On my Super Whipsaw which is much larger than the regular, I'm only using a Fox ball bearing .15 but it offers good power making it a good choice. When I put the nitro to it, it really responds well. Unfortunately, it's Fox metallurgy. I just had one of my Fox .15 liners chromed last year and I haven't had a chance to get it into the engine.

I dug out my original Whipsaw. I recall my early experiences with it was not so fulfilling. I had many issues with tank location. When inverted with the tank up on the sheeted center section the engine goes over lean and quits. This caused mine to crash taking off the bottom wing and breaking the fuse. Due to the wood in mine being original, it's quite brittle. I've had to replace the tail feathers due to oil and breaking problems. The nose will not accommodate a tank behind the engine. One could mount the tank on the inboard side of the fuse but that causes problems too. I don't care for that style engine run. You have to launch extremely lean and it will richen as it speeds up. The problem with that is that the faster the plane goes the slower the engine goes. Therefore the engine charges into the maneuvers and speeds up extremely when exiting.

Mine is currently up in the air. My plane is covered in Nylon Ripstop which I don't think you can even purchase anymore. I have a metal bellcrank in it with Sullivan leadout wires. Not exactly the best practice but it's what was done back then. I can see the leadout cables are sawing through the bellcrank. There's a lot of material still behind the slot it's cutting. One thing that makes a plane fly is horsepower, this would be quite interesting with a F2D .15 mounted on it. I have concerns that the leadouts or bellcrank would immediately fail. 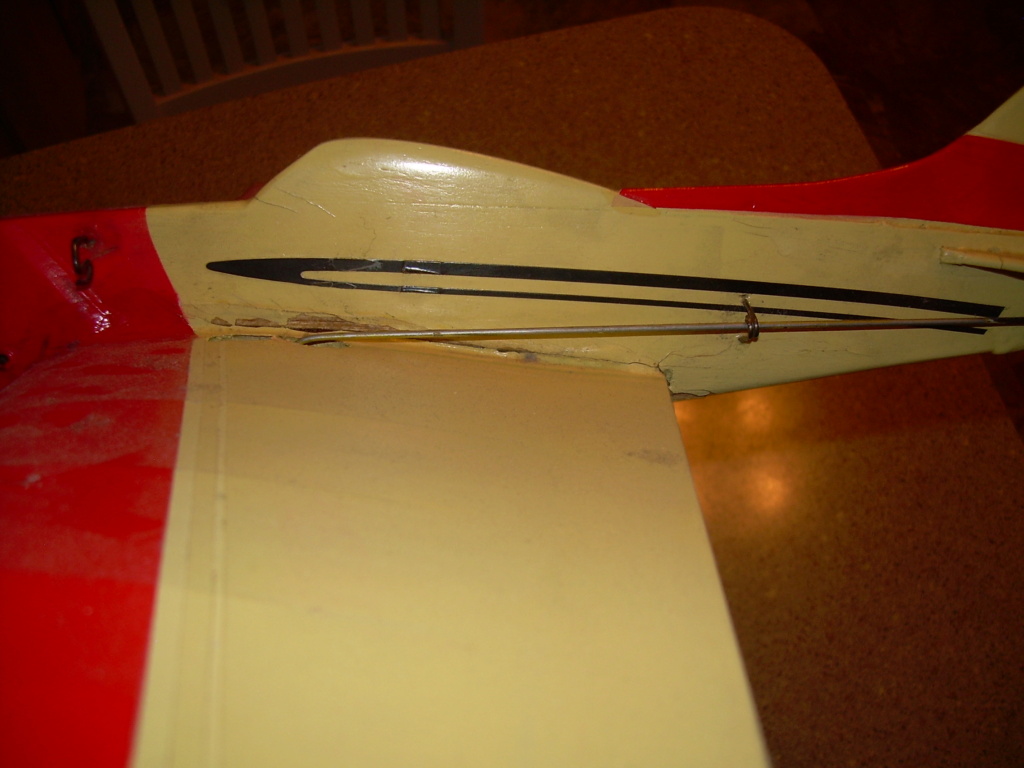 Fuse revealing cracks from crash due to poor tank location 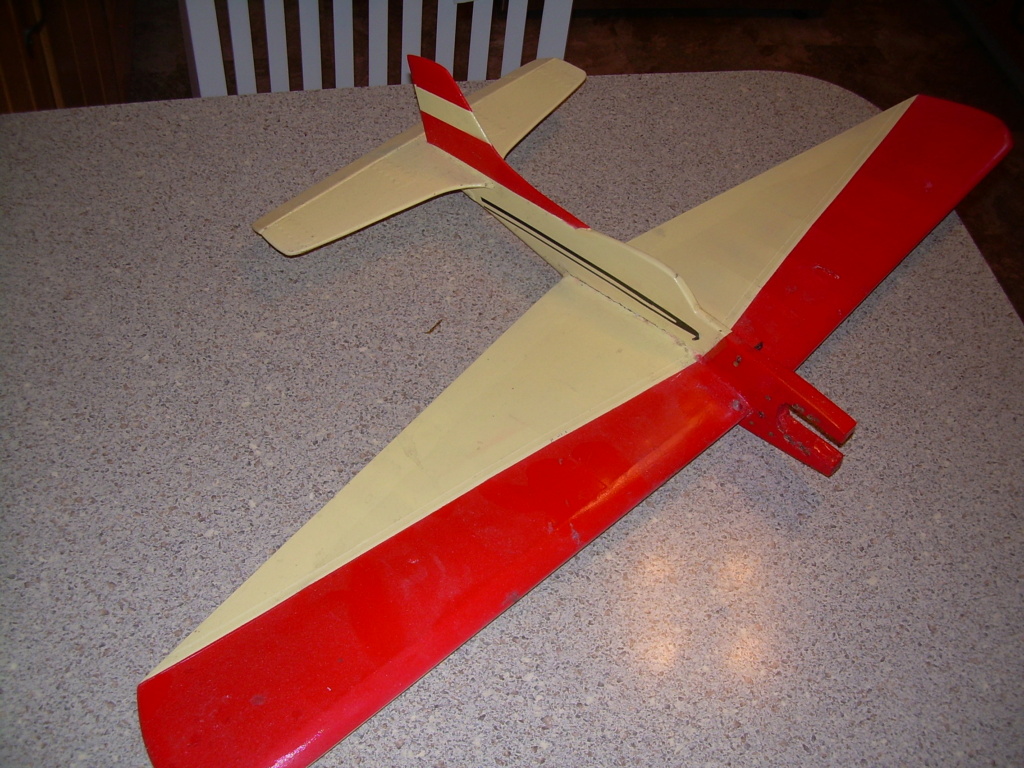 Overall for age it still looks decent. I would like to see it fly again.

Looks pretty good Ken ,Heck prep it up and fly it , i would like to see it fly and get a review from you .

I think bladder is probably the smartest however, if it was me I would build a well into the sheeting behind the LE to correct the tank height. Which would also require the bellcrank to be re-located. Easy to do when first building, huge pain once already built.

Edit: Looking at the plans again I see that the bellcrank is located within the opposite side of the fuselage. If you extend the sheeting 1/2” and slid R-2 over you would have plenty of room for an inset tank. Super easy and very doable.

Ken I could be mistaken since its been a few years but Renie asked me if I had a use for Cameo printed Nylon RipStop....2 or 3 weights as I recall....At the time I think she was mail ordering from JoAnn's but could have been Hancock's of Paducka

Your absolutely correct that it would be special. I showed up at the New Jersey Vintage Combat Festival with my Super Whipsaw and most never witnessed one up close let alone flying. As for the OK .19, I own 3 of those and I admire them especially. I don't believe the .19's were produced as much as the smaller mills. They're the loudest darn engines. The only louder engine I've come across in glow is the Fox .59. The OK .19 is deafening. I can't say how it would fly it, I run mine yearly on the bench and I admire it just running. Call me weird, I just enjoy running that engine.

Fred, anytime you can provide info for those kind of materials is always helpful. I have two planes covered with it and I did them back in the 80's. I found a small scrap of it which I just recently redid the nose of my Sneeker with. The old glues failed due to vibration and the engine runs were all over the map, the plane was shaking so bad it was coming all the way down the lines. I ended up grinding out all the old filler around the nacelle and using heated epoxy to resecure. I then doped and doped and doped and doped the ripstop on. I think it took nearly 30 coats but it looks terrific. One wouldn't of known I did what I did, even the yellow matched in pretty well. I've yet to try the pink silk I have but it's going to be done this year.

Most rip stop today I find is 1.9 oz per SQ Mater

but these folks have 1.1 Oz stuff

* Note : 1.1 oz ripstop nylon comes in both calendered and uncalendered finishes. Please make your selection with the drop-down box above. Unsure which one is best for your application? Check out our FAQ page for quick answers or submit a question through our Contact Us page. We're here to help!

Calendering is a process by which fabric ran through hot, heavy rollers at the mill. This flattens the fabric, seals the weave, and leaves one side of the fabric shiny while the other is matte/dull in appearance. This process is done to make the fabric downproof, increase wind resistance, and improve hand feel.

Just looking on E-Bay, and there is a Whipsaw kit up for bid. Interesting, that the kit is advertised as an Enterprise kit, not Ambroid. Several views of the kit box art, with many different pictures of u-control models on both sides. One view has the plans opened up, in the lower right hand corner, show's the developer as, Paul DeGatto. Even smaller is the date of the plans as, 11/ 1958. The decal's on the Whipsaw shown, are completly different from the Ambroid version. The name, "WHIPSAW" in large letters, show's on both wings, with the engine showing as a K&B .15. Eddy

Paul Del Gatto was a amazing designer. I fly many of his designs. He was legendary with Jetex equipment. Yes, Enterprise did take over the kit manufacturing. Berkeley was having issues at the time as well and Fox took them over and totally ruined that venture.