Log in
Search
Latest topics
» Stuka parts...
by getback Today at 7:43 am

Today was a bit cold so I headed to the shop to get this Ringmaster underway. I covered it today and hooked up the controls. It still needs additional items but this is it. Power is a Fox .35 with a Brian Gardner ABC piston/liner. Recently at the field one of members had this Ringmaster kit for sale. I passed on it as I didn't need one. Well, after some consideration I unbolted my engine from my Ringmaster and gave it to a club member who's not doing so well. He's struggling with health issues which impacts him financially and I figured he loves the hobby as much as I do and I gave him mine. He won't fly it which disturbs me as he claims he doesn't want to wreck it and it's too nice. I insisted that he fly it and enjoy it, that's why I gave it to him.

I discovered the Ringmaster which was for  sale was missing several items inside. It needed a fuse and I happen to have a Sterling Ringmaster fuse. I took this fuse from the box in the 80's and I've been using it as a template for years with a ball bearing guided router bit. I rounded up the needed parts and put it together. I altered the bellcrank mounting to my liking and I used a Sig nylon 3" bellcrank with 3/32" pushrod. As far as painting, I have so much of this Brodak Rocket Blue left and I've been doing all of my models with it lately. I didn't want to buy covering so I used what I had in this Monokote. My dad gave me the wheels a few weeks ago as he came across them in a drawer, he also included the bullet shaped aluminum wheel collars. He used them all the time and I couldn't think of a better use for them.

When I doped the model it was in the 30 deg temps. I had to thin the heck out of it to get it to flow. This caused the tape edges to bleed and cratering in certain parts of the base coat clear. It really made me mad but you roll the dice and it is what it is. I re taped areas and brushed the lines straight and clear coated again. I'm brushing everything. I'm tired of digging out the sprayer and all the clean up as it does nothing but waste a lot of material and it takes a lot of my time to clean the equipment. 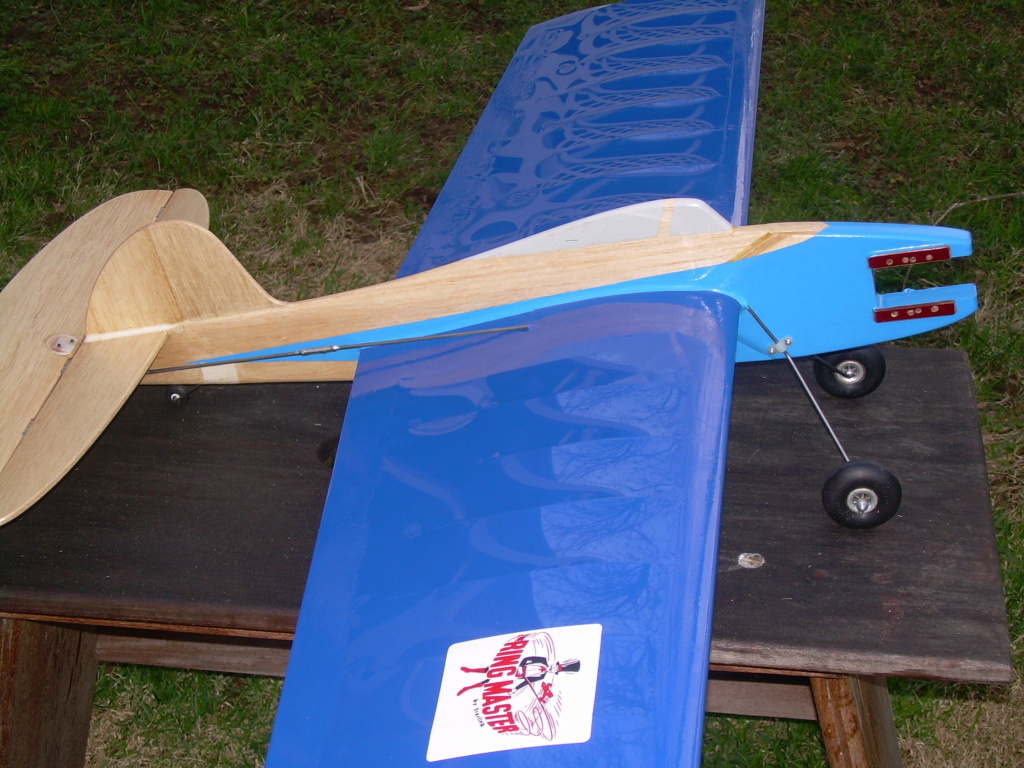 It looks good Ken, I really like the natural wood look.

Let me know how the ABC Fox is. I bought 2 sets for Tigre .35’s a while back and they are over the top tight. Not sure if the Fox assemblies are the same.

Ron, they're indeed tight. I broke it in on the stand using a heat gun to preheat it prior to flipping. He provides a new rod which is beefier in every aspect and is complimented with bushings. The stock Fox is difficult to get the rod onto and this one is even trickier. I did a little grinding on the inside of the case and I used a stone to induce a slight lead on the crankpin. He made the bushings id a little smaller so that you can fit it to your crankpin in the event you were using the assembly on a used engine. I'm currently flying two examples and they really outshine the factory examples.