Log in
Search
Latest topics
» Shrike stands
by rsv1cox Today at 7:01 am

» Shuriken 1/2A engines
by BlackWidow Yesterday at 8:03 pm

Well, it has been a long time coming, but I managed to do 2 things. Firstly is I did manage to run an engine I have had for a while, but had never attempted to run due to problems with it. And secondly, it did run. Sort of.... So I received this old Tornado .049 a couple of years ago. It was and still is in rough shape. The head was pooched, and tapped for a standard glow plug. However, the head was in very rough shape overall, very ugly, rough, and fins were kind mangled into one. But that was the start. The reed was damaged beyond repair and they too are unobtanium, so I did set out to repair it. After many attempts, I ended up with one that very closely resembled a Cox style reed that did work and pass the suck-blow test. The tank/backplate assembly is also slightly deformed and has a major leak somewhere as when I filled the tank it kept leaking out on my bench. Anyways, I put a glow starter on it, primed it, and it showed some promise by firing. I ended up using my electric finger on it, and after a few attempts, it fired and came to life. It did run with the glow starter on it as seen in the picture. A couple attempts of removing it did work, but no difference in running. It did run out the fuel in the tank that it was able to before it emptied itself. But by me saying running, it did, but very rough, erratic, and not a whole lot of power. Actually I can say it was running terribly rich as all the fuel oil all over the engine was very clean. The only time it peaked out was at the end when it was running out of fuel, and then at that it did seem to have some really good power. Any settings while running did not make any difference. It is kind of upsetting as I did have hopes for this engine and had a plane ready for it. But on teh bright side, it did again run at least one more time since only it knows when last. I will be taking it apart one last time to see if I may be able to diagnose a possible problem in case I may be able to get it to run properly. If not, a good clean up and will retire it in the hopes that one day I may just be able to find a correct reed replacement as I do feel this may be the problem even though passing the test.

Sorry for the bad picture, but lens was dirty at time of taking the photo. 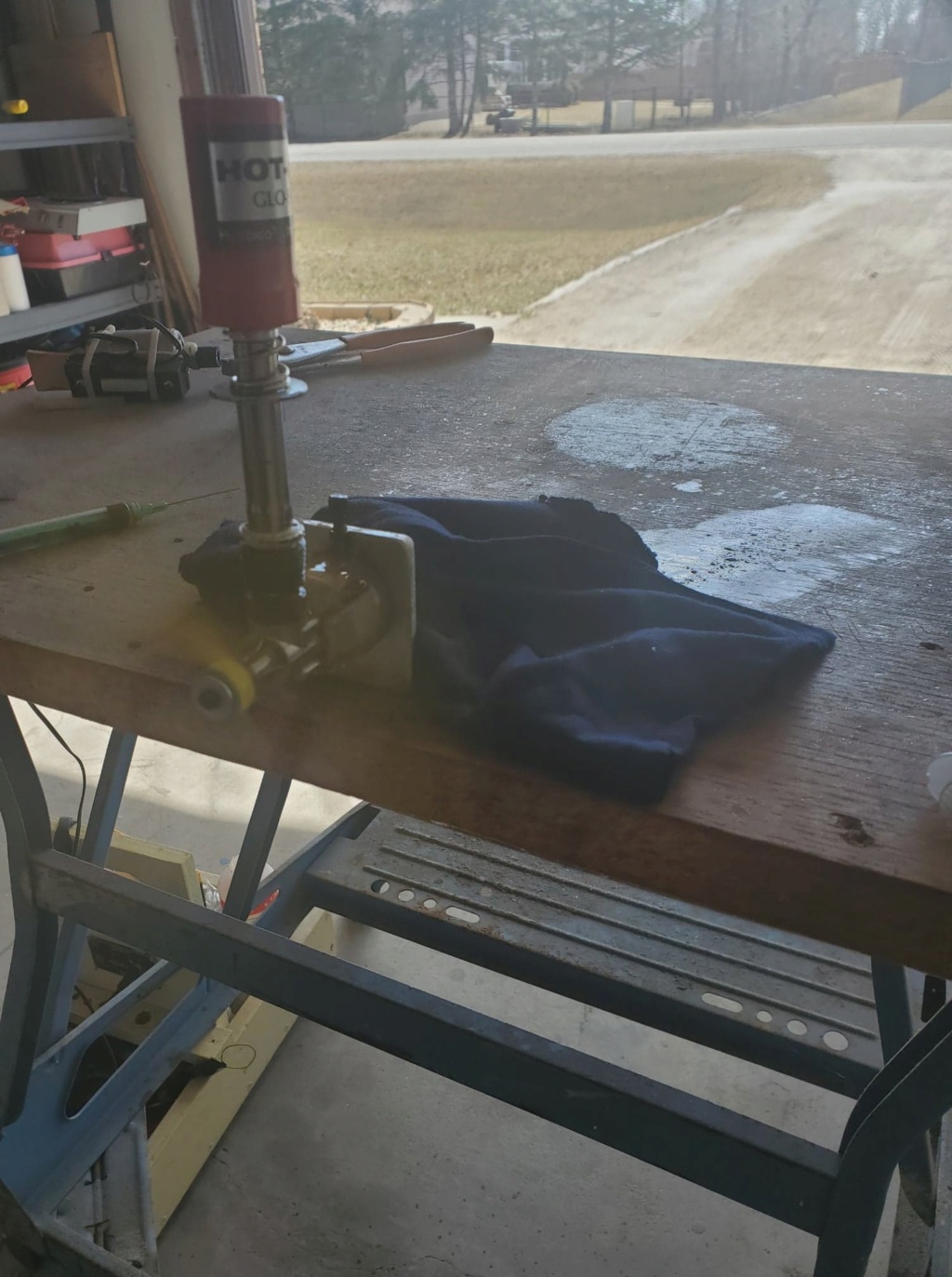 Nice work on a challenging subject! Not familiar with this engine but maybe you could  use some of the Cox tank tricks to help seal it up I’ve seen on this forum.....Dental floss backplate gaskets.... Q tip fiber rolled to fit under tank screws for gasketing....Floppy disc reed.... Would be cool to get it reliable enough to go on a vintage model of some kind.....

Oh and thanks for the idea

..... I’ve been looking but haven’t found the right little push button switch for the “electric finger“ I’m making..... I see the door bell switch on yours.... Perfect!

Glad you saw that and it will work for you. Funny thing though about yesterday is that I did actually fry the darn switch. Don't know what changed, but it has been reliable for a few years. But to be honest, I did really give it a good workout yesterday on the engine. But they do and will work just fine.

You're fortunate to get yours to run. I just got one off of the 'bay and it will not run. The needle valve is rusted solid and the plastic tank has all sorts of cracks. The glow head was also buggered up and not usable. I have seen where someone adapted a Babe Bee tank assembly to work on the Tornado but haven't seen one run. The bolt pattern is about the same but the Tornado uses 3-48 threads. I may try grafting a surestart backplate on it to see if I can get it to run. I personally like the looks of the Tornado.

So the Aurora is a neat engine, a couple have passed through my hands, but parts are tough to get and to be honest they are only comparable to a Babe Bee in performance. Personally I would set it aside and set a soft search on Ebay for parts. That way you can, over time, gather what you need to make it pristine. Then you can shelve it and say you have one. I let mine go to other collectors because it wasn’t for me. I wish I had met you earlier on in my networking so I could have given them a better home. Engines and tanks were perfect and they ran well.

They are neat as you said and why I do like it. I am goning to take it apart as said and check where my tank is leaking from first before disassembly. The one wierd thing I do remember with the tank is that the front of it that goes into the crankcase is slightly flared out. So when it is installed, it sort of clicks into place like the Testors engines do, but not to that extent. This thing will be my biggest project to date as I feel like I will not give up on it that fast till I can get it running better. It will not be something I will dedicate all my time to, but I will keep on it for a while. Maybe tomorrow morning will be time for the next disassembly..... I am very curious if my reed modification held out.