In the winter time this one gets out there usually on Tuesdays and or Thursdays. I've had it probably 3 or 4 years now. It's just plane fun. It's a Weekender by Hitec, there patterned after the full scale stunt plane called an Extra 300. I fly off a grass field that isn't always mowed so I went to bigger wheels and no wheel pants. The stock setup was not going to work on grass. It's been through some trauma but still flying good.

I'm old school and continue to fly on the 72Mhz band. I never ever have any radio problems with this plane.

I had Batteries Plus make a new pack of 8 Panasonic 1700 for the transmitter about a year ago. The radio is a bit overkill for this plane but I use to use it for 6 servo full house sailplanes. They use lots of mixing and stuff. 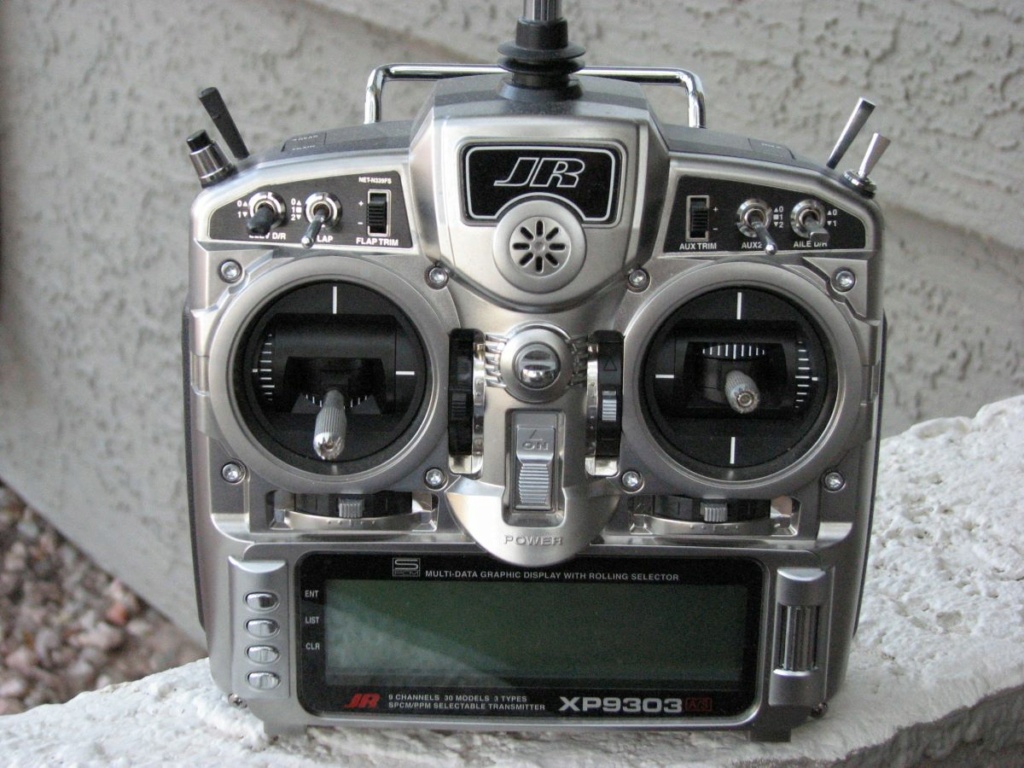 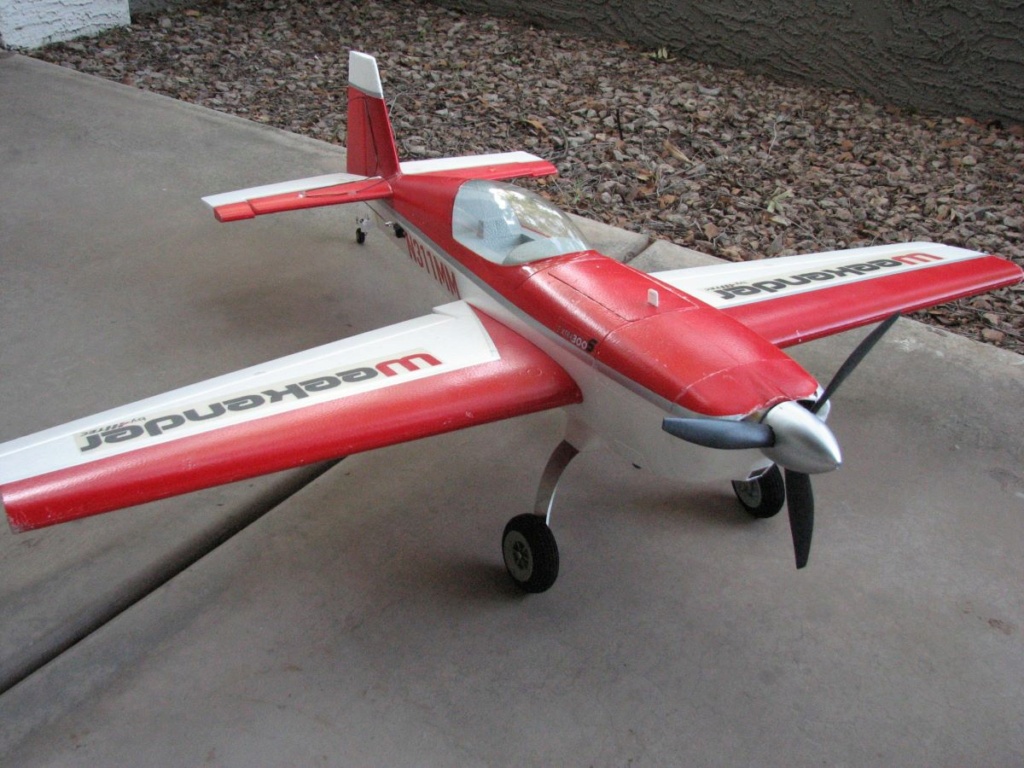 Nice ! That radio has a lot of buttons on it for sure

Looks like a bunch of fun and twice a week is good practice if you need it . Is the plane electric ? Don't see a engine .

getback wrote:Nice ! That radio has a lot of buttons on it for sure

Looks like a bunch of fun and twice a week is good practice if you need it . Is the plane electric ? Don't see a engine .

Thanks 'getback'; yes, it's an electric. It has a Graupner out runner motor and speed control that is stock with the plane. I don't know how they can sell these so cheep. I got this plane new for about 130 dollars and it comes ready to go with motor, speed control, 4 servos already installed, all you do is bolt on the landing gear, bolt on the wheels, install your receiver, screw on the tail feathers to the fuse and connect the linkage for the elevator and rudder and install the prop, it a collet type pinch fit to the motor shaft; I roughed up the motor shaft with a stone or some sandpaper for good grip on the collet. It's a pretty powerful motor and I don't wasn't the prop to come flying off at me. those 2 servos are in the back on the sides and weigh next to nothing. In the picture you can see the black elevator servo behind the identification numbers. The other 2 servos are of course in the wing for right and left aileron control. It's a 4 channel plane with elevator, rudder, ailerons and throttle. It's not one of the popular 3D planes though but it is very aerobatic capable with a symmetrical airfoil. I fly it around inverted a lot. I like to do circles inverted low to the ground (grass) and slow. I gotta watch for a stall though. fortunately it's powerful enough even on a good 3 cell (3S) battery it will pull of of my mistakes pretty well. On a 4S battery it will go almost straight up to nose bleed height. When I have the 4S in there I will go way high cut the throttle and do a spin nearly to the ground.

So it's a really simple plane to get flying and it has good behaviors not witchy or particularly hard to fly but not really a beginners plane either. It will top stall if I slow it gown too much. I actually think it's less prone to a tip stall when I'm flying slow inverted than slow right side up. Don't get me wrong, it's nor a tipstally plane at all, it's just that I push it pretty far on the slow sped side a lot more than the average flyer would.

Well it sounds like you do have a lot of Fun with it , Low and slow inverted , you have a pretty good hand on things to do this !

Neat topic… Daily Flyer…Or go to flyer…. Nice airplane and description!… I want to do a “full house” for Cox engine…. Just haven’t decided which one yet…. Here’s my at least once a week flyer…. An Ace littlest stick that’s over 30 years old….I’m surprised it has survived this long…. On it’s third set of power and electronics…. I’ll write up its latest rehab sometime… 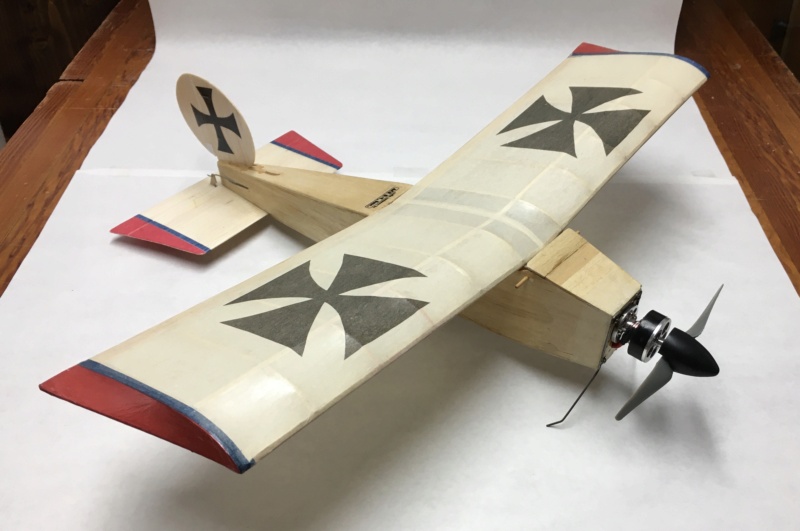 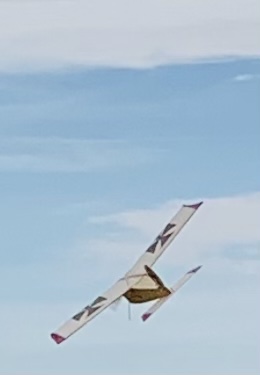 It's just that I have been flying R/C planes for a long time and finally got it figured out a bit.

What a cute little plane!!.. After seeing yours I kind of remember seeing the ACE littlest stick back in the day. Was it originally made for a "galloping ghost" radio? I'm thinking ACE made one of those radios back then, but maybe I'm wrong.
You have kept it up amazingly good. It looks in great shape. Is it rudder, elevator and throttle? Actually in the picture it doesn't look like it has rudder control!

Thanks!… Yes it was designed for single channel rudder only …. Its first radio was an Ace Digital Commander with one servo for the rudder and a Pee Wee .020 for power…. It is three channel now with RET controls…. 5.5 oz - 45 Watts…. Convenient to keep in the back seat of the truck and go fly when time allows…..

Do you still have the original ACE radio?

The electrics are so nice for quick no mess setup and fly. You just find a place, grab your plane and transmitter and hit the skies.
The electric launch sailplanes are no more difficult.

My first R/C airplane was a Jenson Ugly Stick with a Kraft .61 engine. It flew really nice but I hadn't got learned to fly it all that well before trying things I shouldn't have. So that one is no more. But it looked just like a big version of yours.

Unfortunately don’t have the radio any longer ….. It was wide band and AM….

Yes electric is convenient and certainly have their place….I’ve enjoyed them for a long time now…..I’ve recently gotten very excited rediscovering the 1/2A engines as well…. I nearly feel like I’ve been missing an important part of the hobby….Guess I’m getting a bit nostalgic…

Yes the ACE stick was a cousin to many different stick designs thru the years…. I favor this one cause it’s small and and goes with me as I travel a lot….It can fly big or closer in and is a good rough field flyer so it opens up different places to fly…. Best….

I have been making trips to my storage unit almost every other day taking some stuff there and bringing other stuff back. I have decided to keep all the planes here and get the heavy stuff in the storage unit. That way when I go the move it won't be a big load of heavy stuff. I put my mechanics 10 drawer 'top box' in the unit and just put the last 3 small drawers back in the box today.

One power plane I brought back would make a good weekly or by weekly flyer. It's a Hanger 9 Funtana 40 S. I got it in a trade some years ago. I has a Saito 80 normally in it for power and it actually runs great on pretty high nitro fuel, something like 30%.

The engine has been sitting a long time and I think it needs bearings now. It has a foot more wingspan than the Extra at 5' 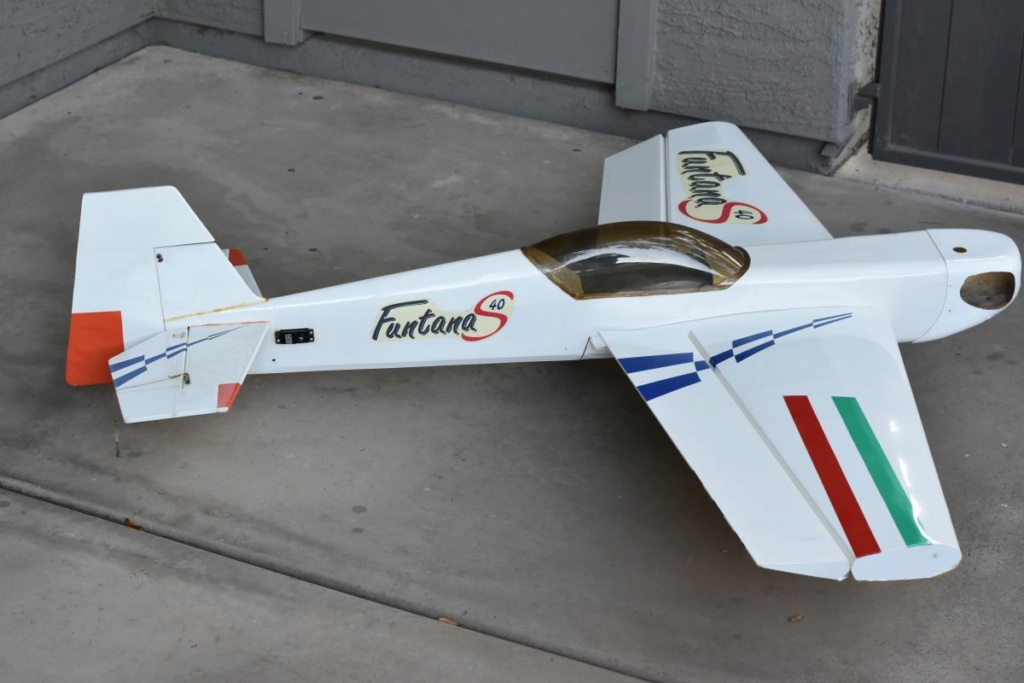