The photos below are of my latest cox 049 powered RC car platform. It continues the process of development through my previous Air Cars, through my test bench, of concepts, techniques, integration, and engineering I have been performing to arrive at the actual car I hope to eventually build. The car below is just another step in the process of shaking out problems, solving them through implementation and testing in what a (DOD) Defense Program would call a Concept or Technology Demonstrator. I know lots of people know how to build the end product properly, but I dont, so I am following the same process I use in developing technology or concept demonstrators for the Department of Defense. 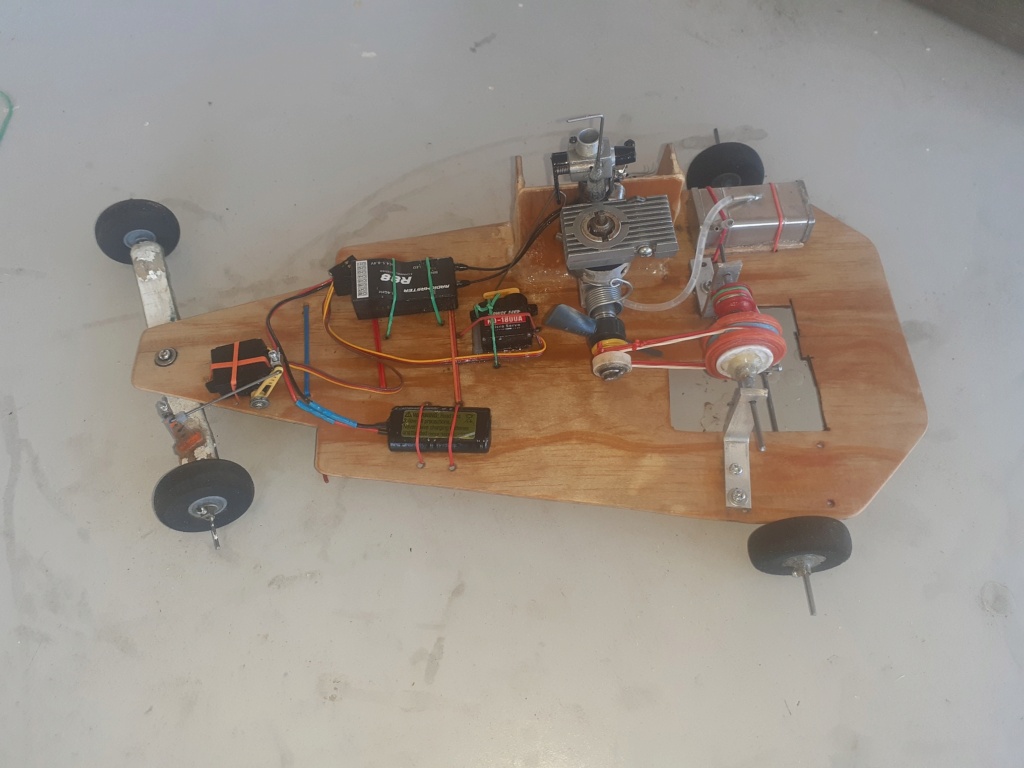 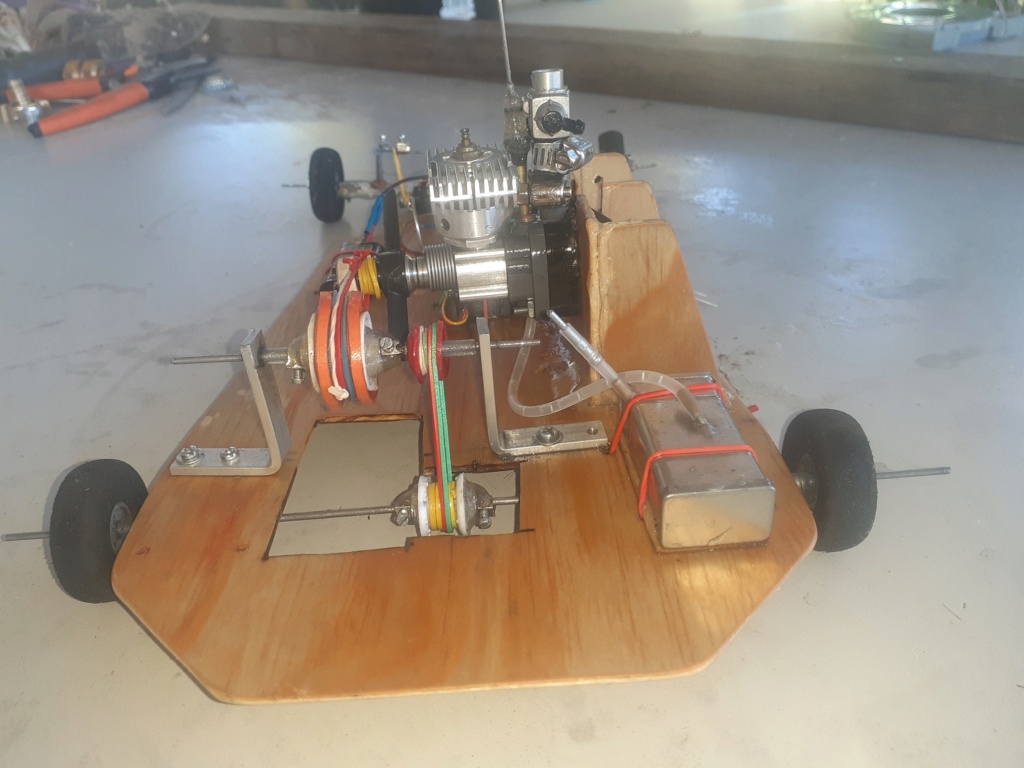 The platform shown in the images above is finished with now. I will put a roll bar on it to protect the carby and engine and my son can drive and thrash it all he likes.It has served its purpose for me. It runs very well and is quite fast and fun to drive :-).

During the build I sorted out getting the OS 10g carby to work properly with the sure start engine and to throttle nicely and smoothly from approx 16k rpm to 3k RPM. I confirmed that my idea for a drive chain can work and got a better handle on the gearing ratios required. One of the biggest issues I found and solved with this jigger was the engine overheating even with a heatsink which during one full power run ended up melting the grey plastic horseshoe backplate and reed assembly to the point pieces of gasket broke and were hanging out through the huge gap between the assembly and the crankcase caused by the heat. The black gear on the front of the crank had melted into the the crank casing. The addition of a cut down prop acting as a fan helped resolve the problem and provided an easy way to use a spring to start the motor.

On my next platform I aim to build an aluminum engine framework/pod to hold/mount the engine, fuel tank and servo for the carby, such that I can transfer it easily between platforms and it is properly mounted and supported. Im thinking of puting a duct/shroud around the engine to channel the air from the fan on the front to see if it helps cooling further. I will implement a rough form of suspension to help with handling, look at some better hardware for the drive chain that will last longer. The steering mechanism has proven to be better than I thought or expected so I wont alter that for the short term. I dont know if it will be the next platform or the following one, but  definitely want to build the drive chain with the ability to change through two or three gears via the RC and servos. There are some simple non gearbox ways this could be done by using say three lots of drive bands and idler/tension pulleys against each.........  more thinking needed. Lol. Some form of brakes need to be designed and implemented as the potential speed is higher than I expected.

Eventually I aim to mount some electronics on it to monitor acceleration, vibration extremes, engine temperature, engine rpm, GPS data feed, and a live video cam. Ill do the electronics through a separate board rather than trying to hack the RC stuff. The electronics are not really for a car platform (very very fast boat project that uses flaps etc. to control its level etc. with the water) but its a good and easy platform to test them on. :-)

I guess in a way, its not really modelling :-) but it is at least based on the awesome Cox engines which are like internal combustion engineering clay for so many possible projects. So many options and variations and so easy to modify and configure to do things you could not do with any other available engine. And the price is such that you can afford to take risks and wreck stuff testing ideas to get things right.

Cool ! Looks interesting for sure , a lot of gadgets on one platform , Would love to see it run as you say it faster than anticipated. I would call it modeling in my book and designing at the same time !

me i use a bee back plate like this 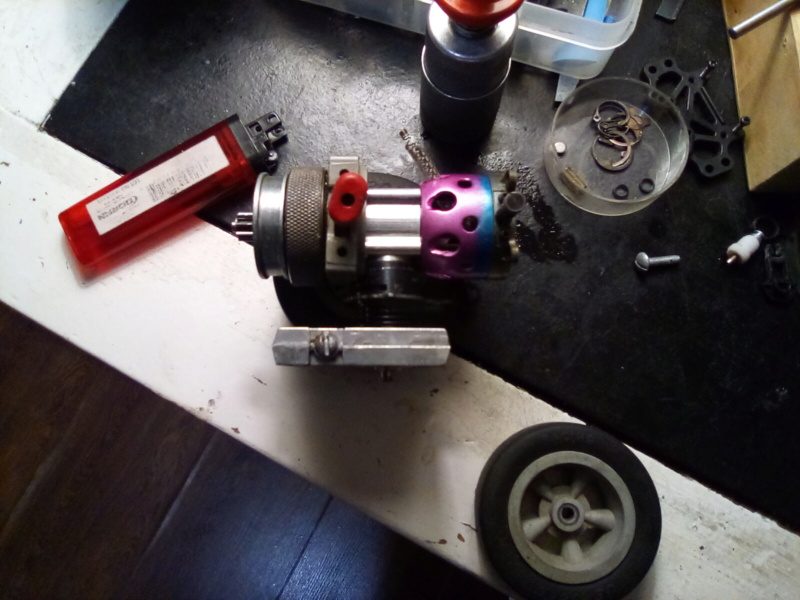 Goodness Yabby, that is complex, involved, and darn right innovative. I like it.

robot797 wrote:Ha
another funny build from you
but to be honnest how do you overheat a cox engine
I have had many rc cox engines
with the normal coaling head and they never melt the backplate

Its not a car engine and was put in a car with no front fan and the round cox muffler with the standard little hole in it as really wanted to keep noise down. I think the muffler melted the plastic first, then the muffler started spinning around the cylinder, which ground the starter spring down and broke the starter spring, and the crankcase got hot enough to melt the black cog on the front into the crankcase as you can see the melted indent from the picture. The car was moving quite slowly at absolute full revs as I had the gearing so wrong. I obviously pulled the engine apart later and there is no internal damage! Piston and cylinder fit is fine, conrod connection is ok, no pickup on cylinder or piston, crank and crankcase inside are fine, no discoloration anywhere, no slop or unusual wear etc. infact the same engine with a new backplate and the cut down prop as a fan and a muffler with bigger hole in it, runs great and no problems now!

Same fuel 25, 25, 50, same glowplug and glowplug adapter. I had suspected it may be a problem when I was test running on my static test bench for it, but didnt expect quite that bad. Lol. I bet anything if no muffler, no problem, but have to have one, so small fan on front and problem solved.

Thanks for the suggestion on the way you use the bee backplate David. 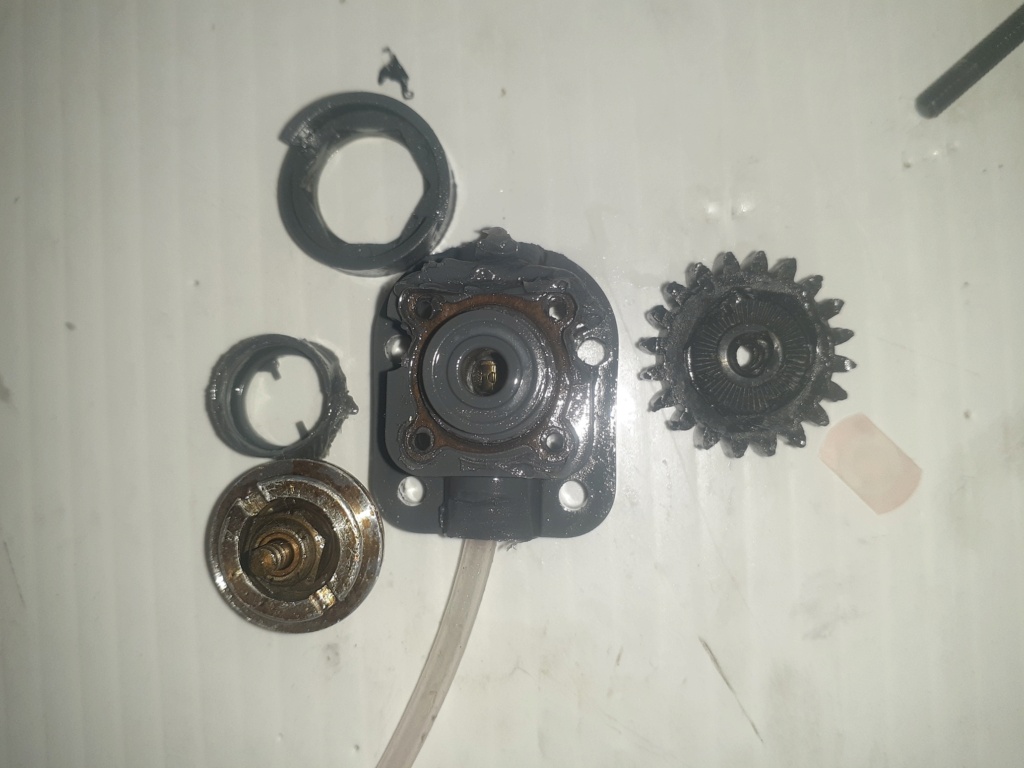 getback wrote:Cool ! Looks interesting for sure , a lot of gadgets on one platform , Would love to see it run as you say it faster than anticipated. I would call it modeling in my book and designing at the same time !

I a going to see if my Son can film it for me and put it on youtube so as that I can show it going on the forum. I cannot do this as there are issues my DOD Security clearance that prevent it or just make my life difficult if I do. My son is intellectually disabled , but still pretty ok, but he has a paranoia about socilal media, so he may not do it for me. See how we go Eric.