Just tested this afternoon one of my old-stock red postage stamp backplate reedies in the nose of the Quickie 100 plane, with its home-made exhaust throttle ....(the thin wall cylinder has a bottom rim that does not allow the use of the conventional throttle rings sold by Bernie and Matt...so I have devised one).

A lonely tester, I held the smartphone in my right hand and the plane in the left, while moving the throttle stick of the radio with my..... toe

so the camera movement is hilarious...(This may raise eyebrows of strict and consolidated modelers , but life is short, why wait for a helper?).

Noteworthy is the top speed at near 20.5k with a 5x3 COX prop with safety tip, and the lowest speed near 9k. (These numbers are the results of audio-taching the video). The rattling sound in idle comes from the thin wheels on the piano wire landing gear...

Other than the Galbreath head and Nelson plug (and the flats I filed on the top fin), the engine is all old stock COX 290. Fuel is my home brew 60/20/20 all castor.. 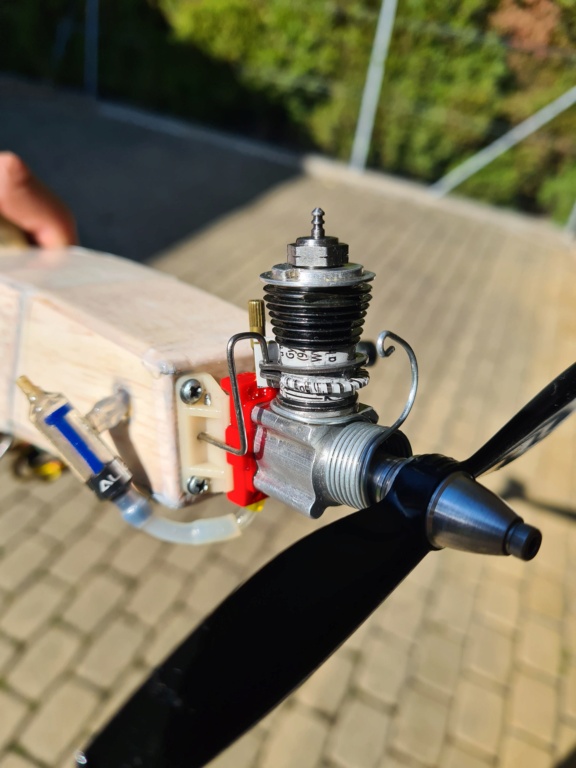 This little critter has more power than a stock Black Widow that was tested to turn a somewhat larger, 5 1/2 x3 prop well below 20k as reported in a 1974 article: http://www.sceptreflight.com/Model%20Engine%20Tests/Cox%20Black%20Widow.html

Sounds like an angry bee on steroids when she revs up

The 290 must be one of the most underrated model engines in the world. Very nice engineering on the exh throttle

Thanks Kari, aesthetically and performance-wise the 290 is a gem of the COX reedie line-up..

My general impressions of the red (although some were white) Dupont Delrin postage stamp engines, if you use the one that has the dual bypass with SPI cylinder, mount it on an 8cc metal stunt tank assembly with a Tee Dee head, you essentially had a Black Widow.

And, if you took the one with a single bypass with SPI and mounted it to an 8cc stunt tank assembly, you possibly had a Golden Bee?

Yes, the 290 has always dual bypass..maybe the turbo head, plus the wide venturi, but this 290 is definitely more powerful than my stock Black Widows..

Thanks for making the video , I know you have talked about this engine and was wanting to hear it run and It runs Great with the sound of a TD with a small prop !

Thanks Eric and David. A few weeks away from the flying field gives you the cold turkey and you just want to hear them scream

I hope to be back flying soon with the real experience in my ears eyes and fingers.