and a problem. Five take-down screws, one just snapped in two. "There is always one." Self-tapping, I thought it aluminum, but no, a magnet picks it up. 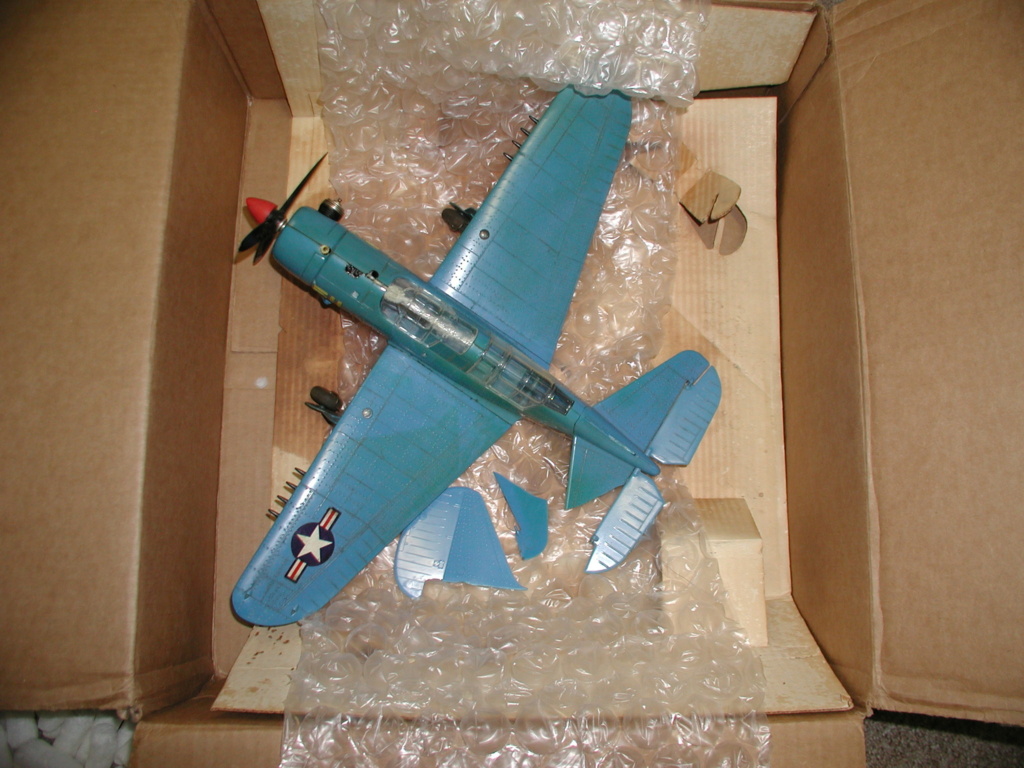 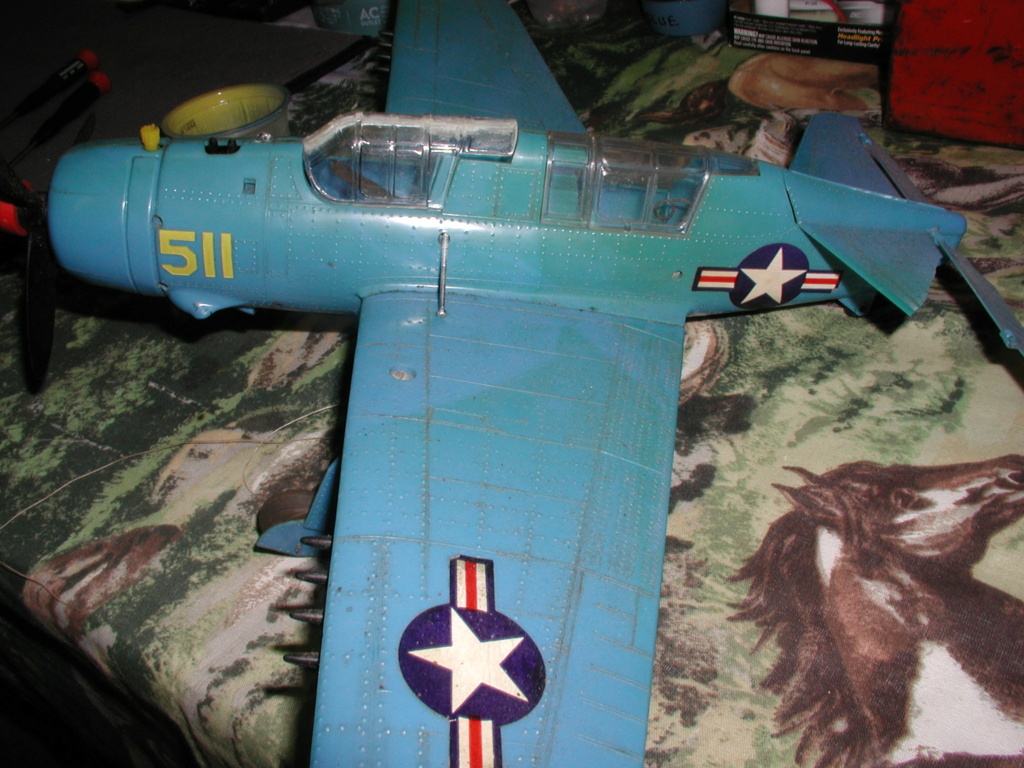 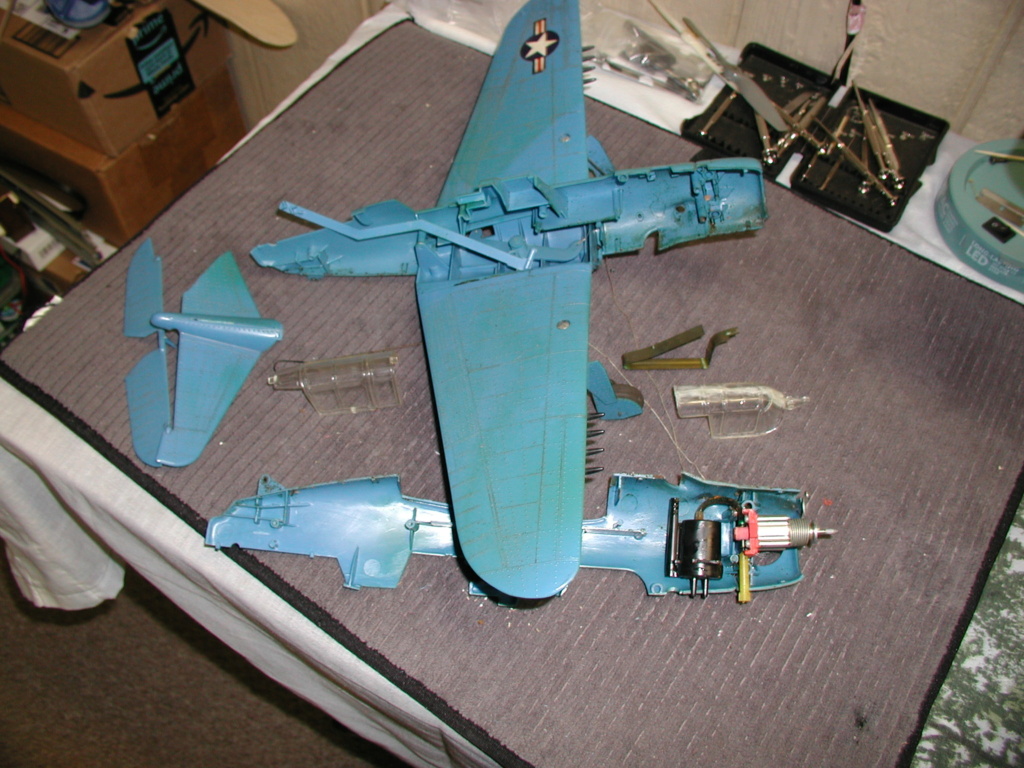 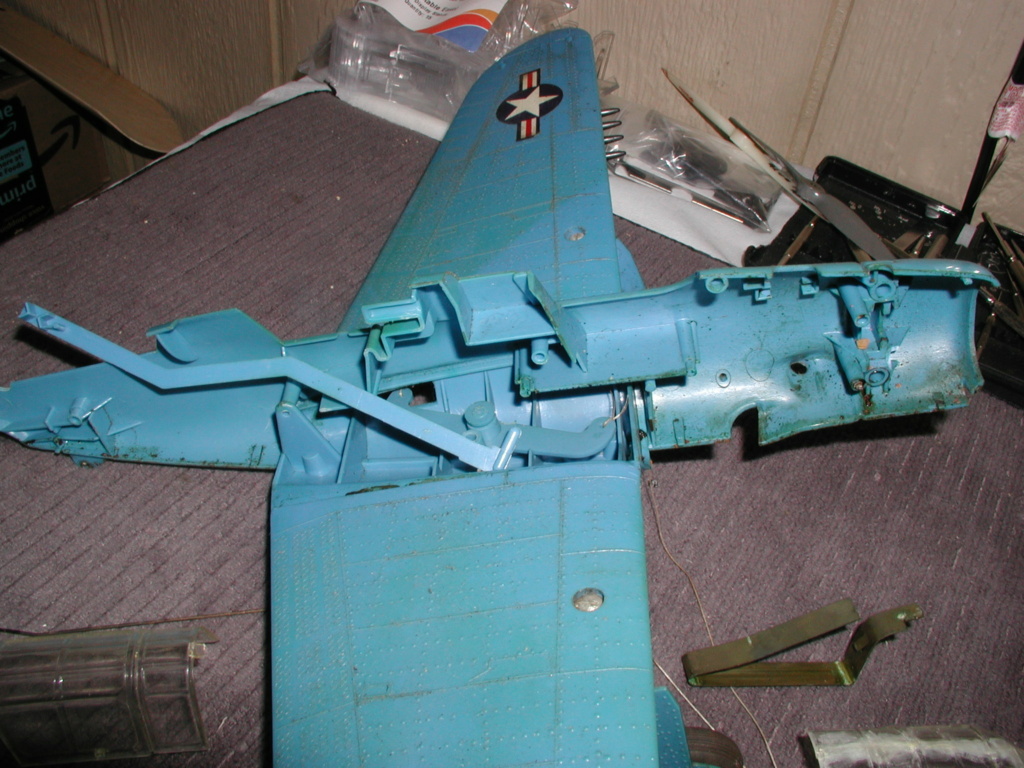 Bottom engine compartment screw, where all the castor goo acuminates. Snapped off right at the post. Only way to remove it was to cut the post half way down exposing the broken screw and using pliers and heat remove it. I couldn't use heat initially as the screw was buried inside the plastic shaft which would have melted. Red tube Testors reattaches the post. Plenty of threads left in the body. 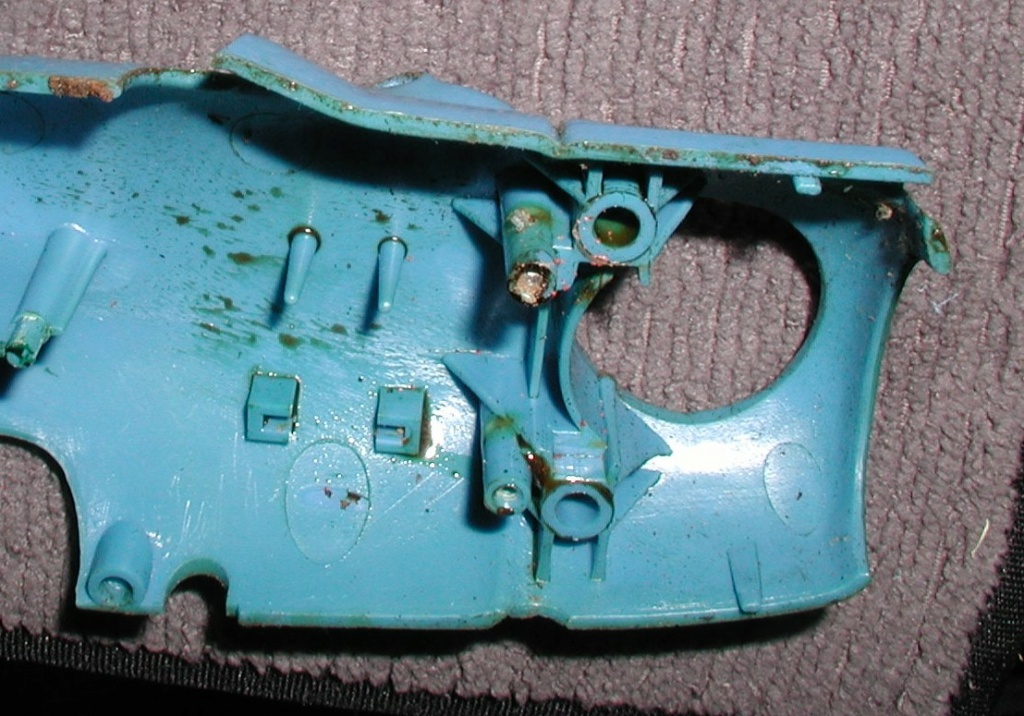 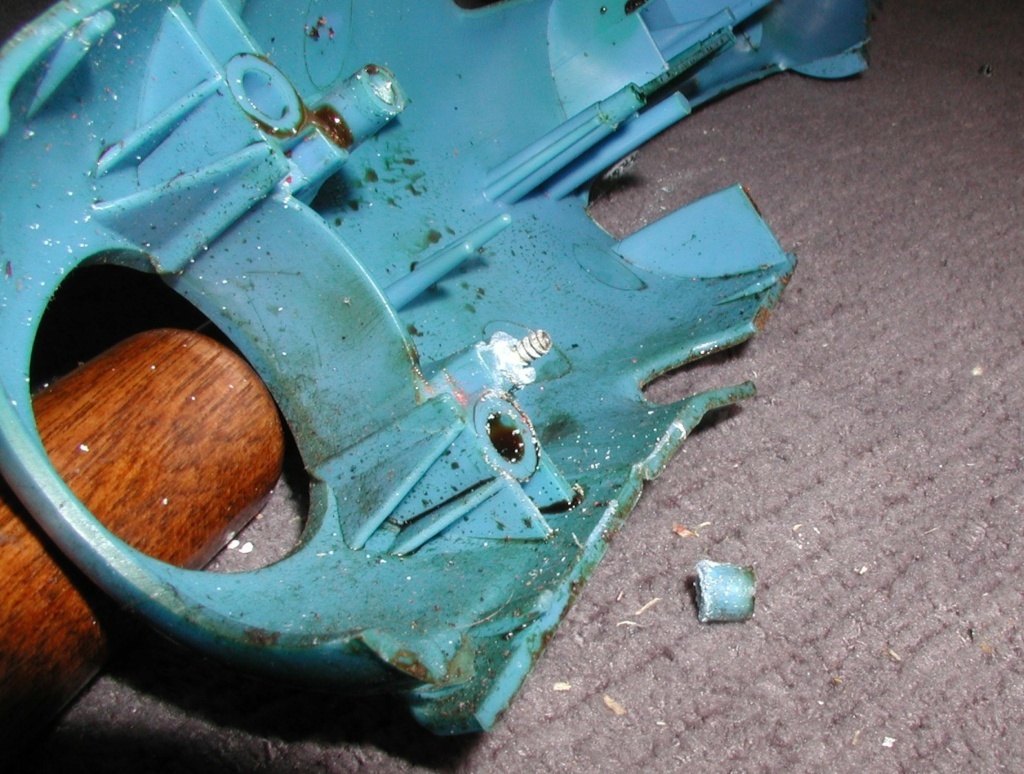 Yes, lots of parts used to eject the pilot. 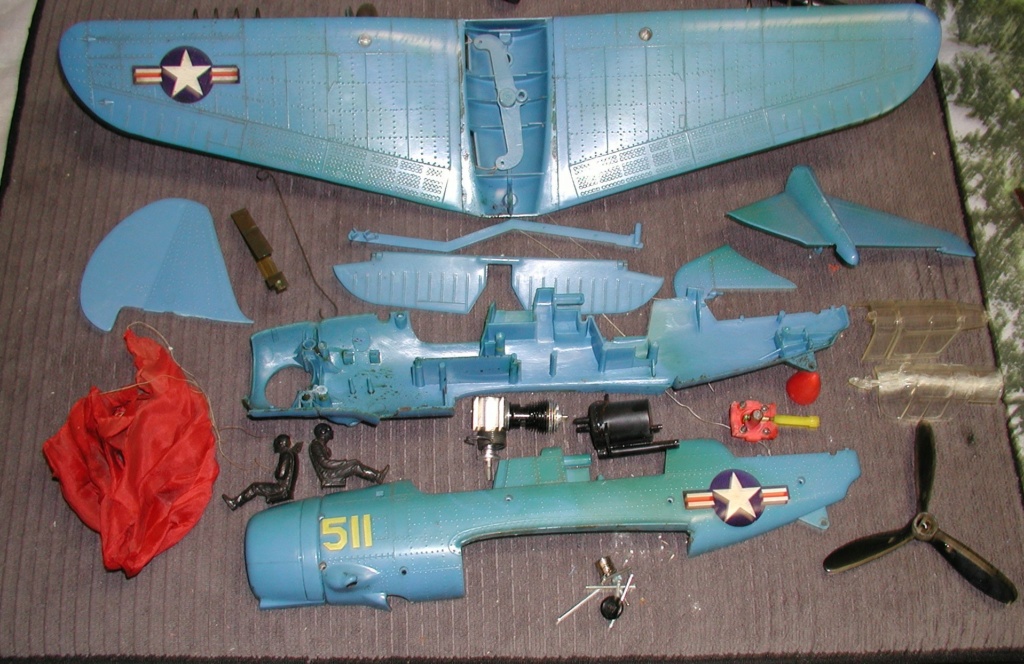 Man that baby does have a lot of Parts LOL , once you start putting it back together can you show how the eject mechanize works ? Nasty mess but am sure you can get her cleaned up , see you did fix the screw problem .

getback wrote:Man that baby does have a lot of Parts LOL , once you start putting it back together can you show how the eject mechanize works ? Nasty mess but am sure you can get her cleaned up , see you did fix the screw problem .

It has this brass leaf spring in the cockpit that does the job.  Lots of tension built in that spring. 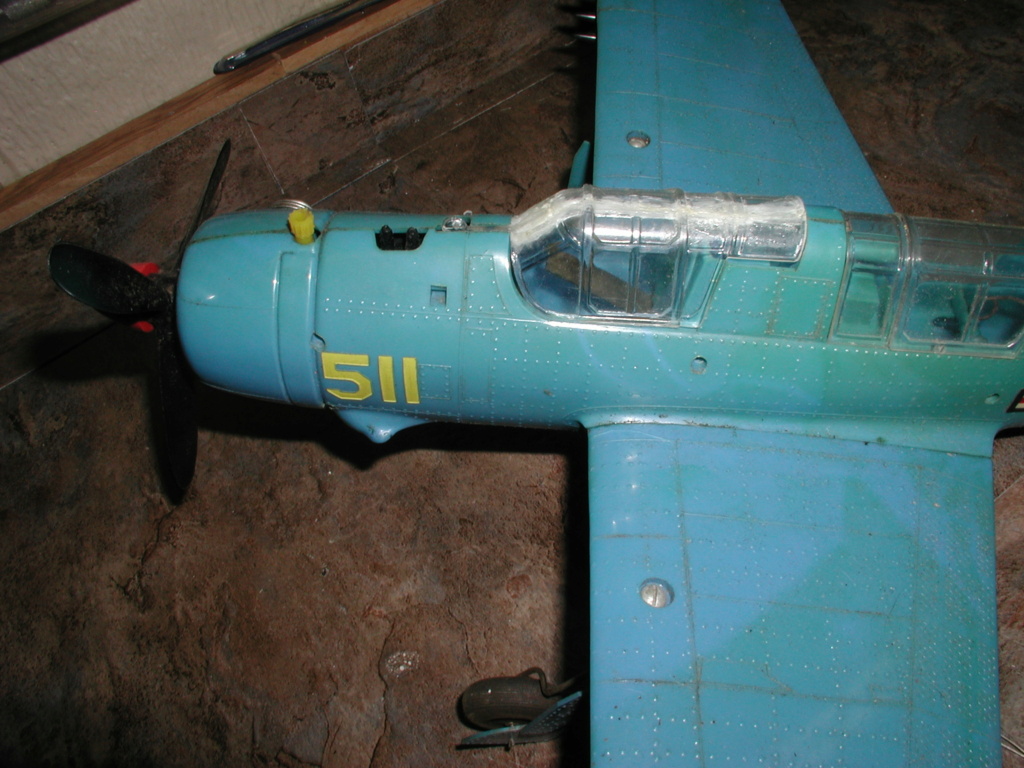 Somehow a third line goes in there, but I don't see provisions for one.  Maybe a sharp "up" on the lines pops the pilot, I don't know...yet. 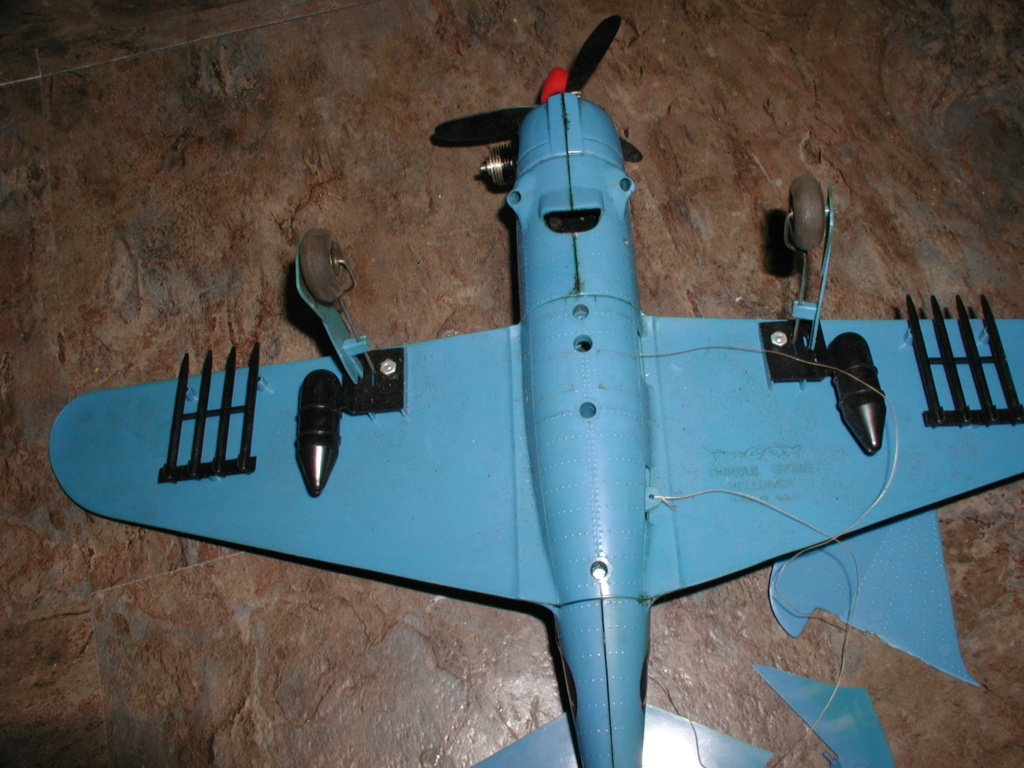 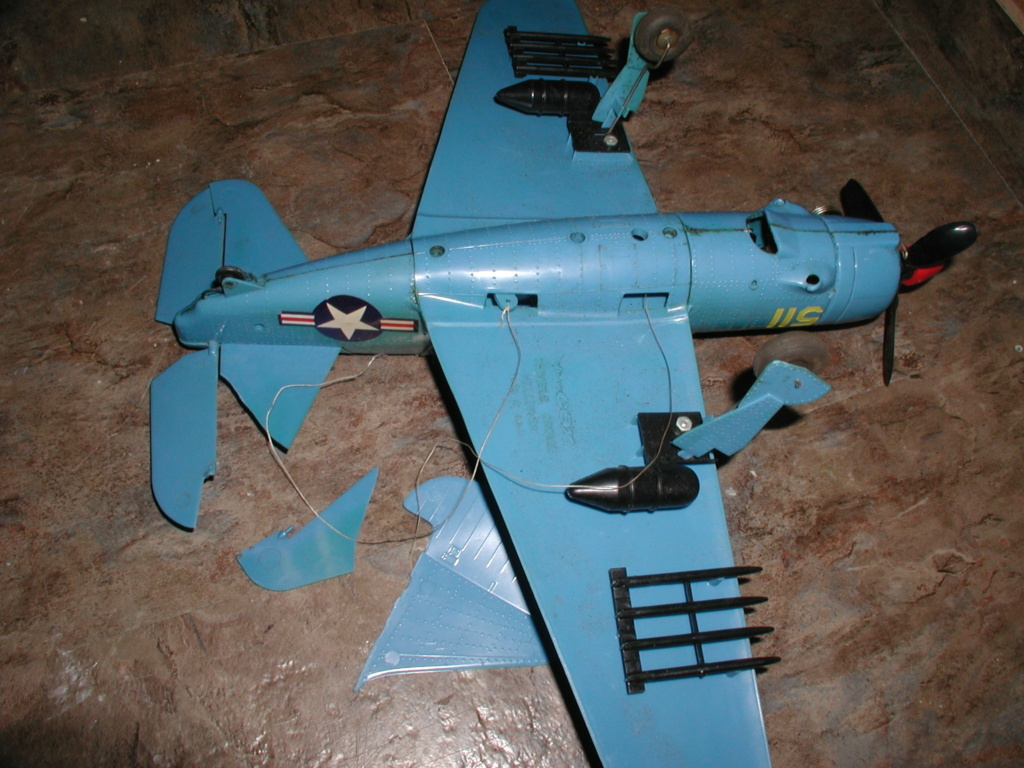 Seller included these rat eaten instructions that I copied.  Help when I put it back together. 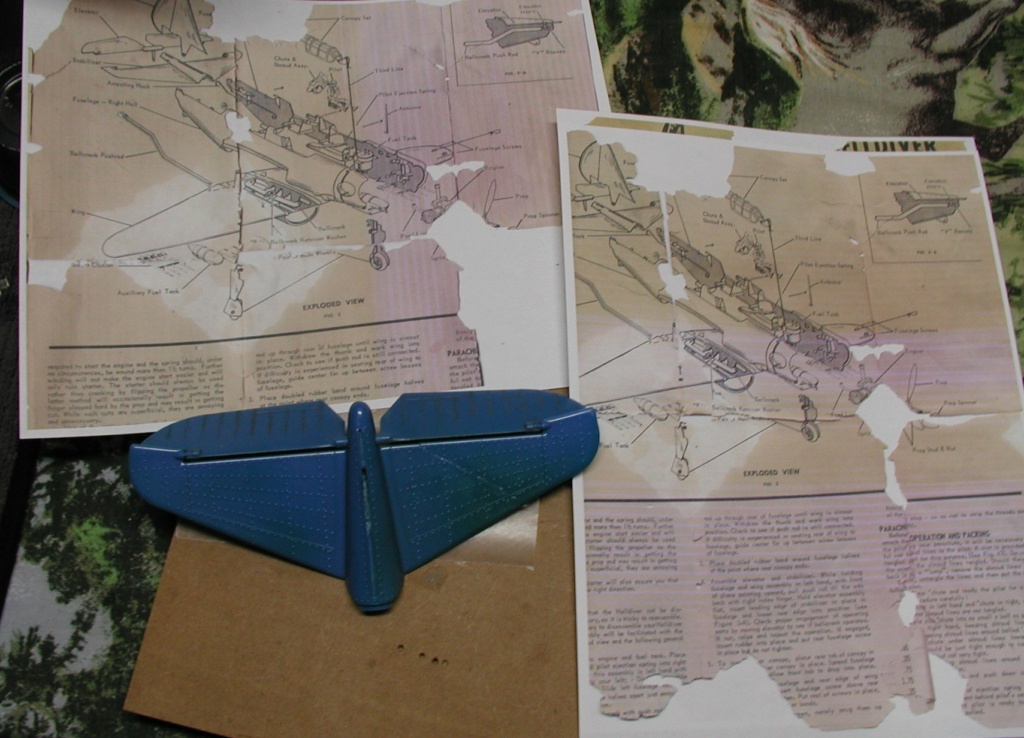 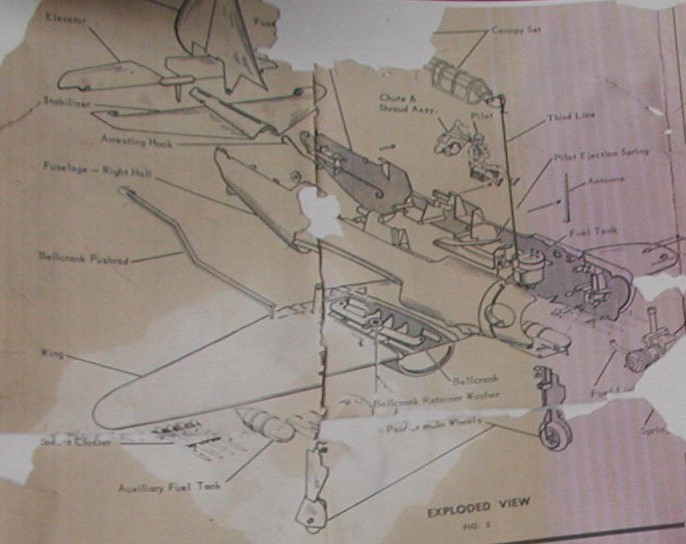 I checked the "Instructions" list here and didn't' find any, also online so these will have to do.

Just wanted to be sure you know:  These Restoration Threads are Fantastic!!!

Kim wrote:Just wanted to be sure you know:  These Restoration Threads are Fantastic!!!

Thanks Kim, a little encouragement means a lot.

he has some pretty neat ads tooo

Kim wrote:Just wanted to be sure you know:  These Restoration Threads are Fantastic!!!

he has some pretty neat ads tooo

I think that side hole is where that wire goes Eric. They gave a separate spool just for that. PO never used it, just the two-line control. Today I would not use it either. Flying with the handle and pulling on another to eject the pilot is well beyond my brains ability to comprehend. 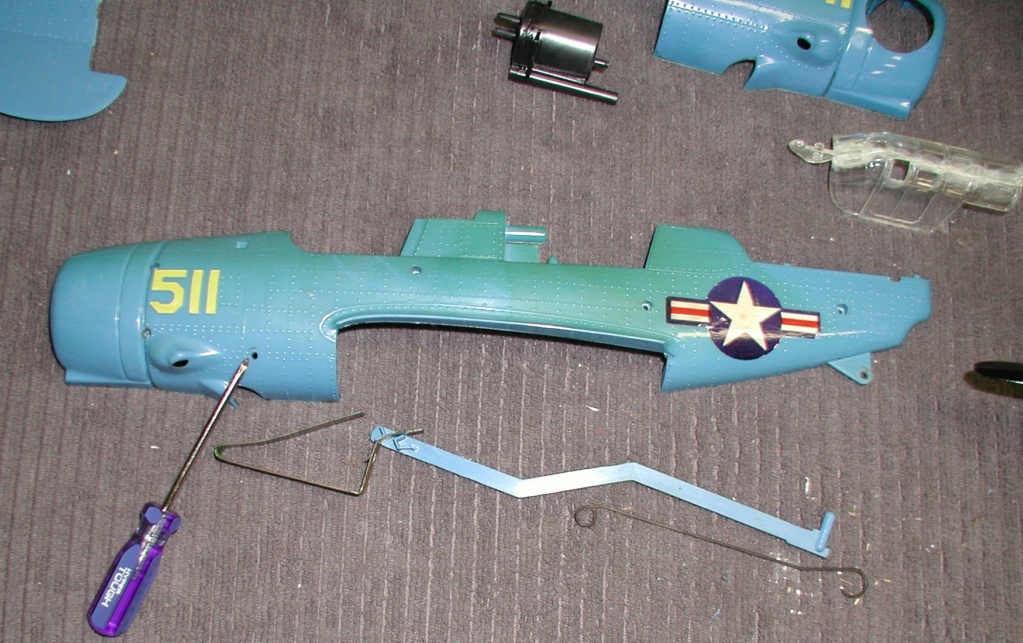 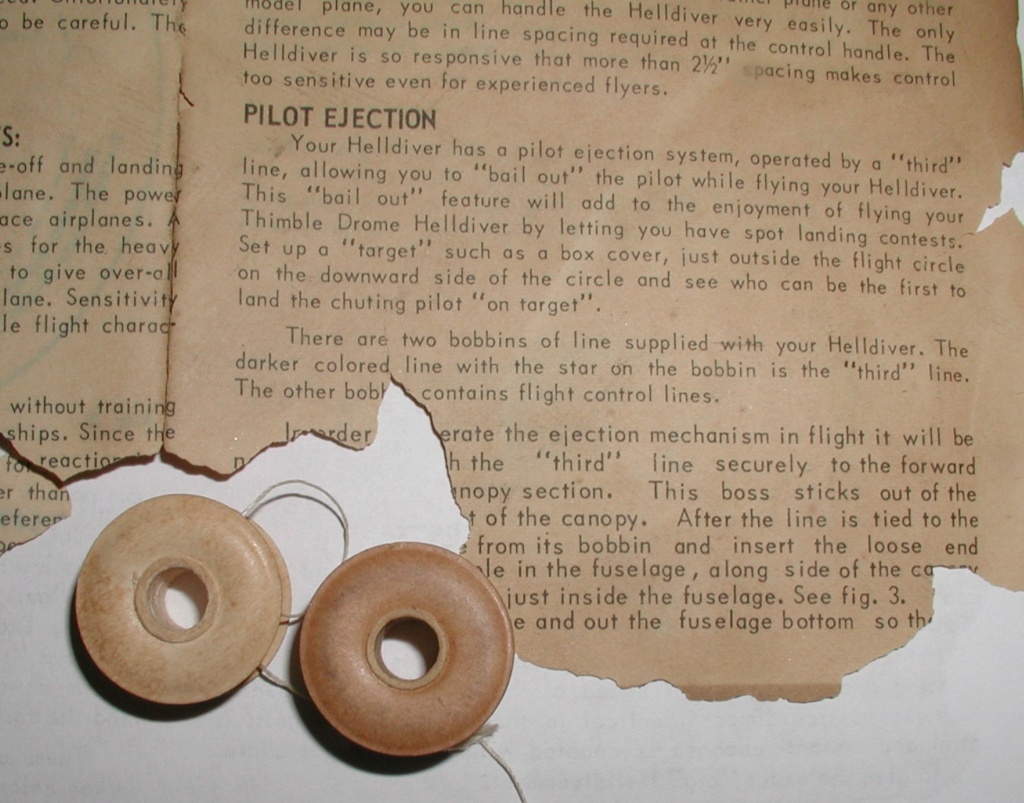 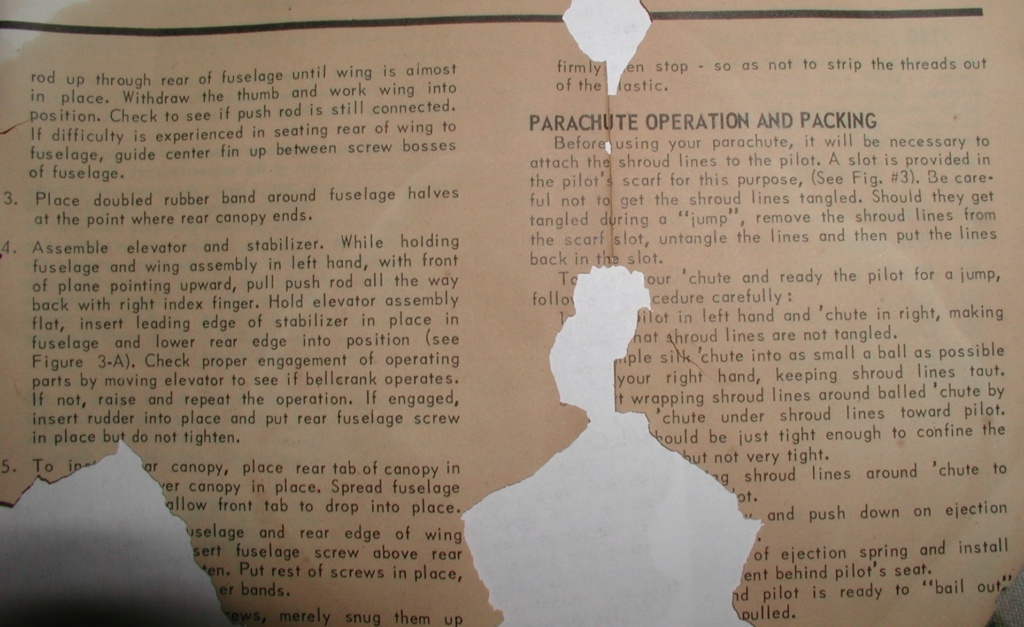 The bailout ejection line could have been done with a ring tied to line end placed over a finger, say pointer or index on the hand holding the C/L handle.

The Japanese Zeek was more nimble. After we dropped our 500 pounder onto the deck of the Kaiyomaru, setting off its magazine stores as a hunk of fiery twisted metal on its way to Davey Jones locker. The Zero caught our underside on the way up, setting fire to the engine, stopping it cold with its 20mm cannon rounds.

Over the intercom I flagged my gunner radioman, 1 - 2 - 3, he bailed, then I after him. Fortunately there was a PBY Catalina in the area, who was able to pull us out of the drink.

Nice plane she was, having paid the ultimate price for freedom. After bailing, they'll issue us another, hope this war will end soon.

I'm not sure where you got your italics George, but it reminded me of my most intriguing WW2 Naval event.


During the Battle of Midway, Gay was the first of his squadron to take off from Hornet on June 4, 1942. Gay's unit found the Japanese carrier fleet and launched an attack without any fighter plane support. Although he was wounded and his radioman/gunner, Robert K. Huntington,[3] was dying, Gay completed his torpedo attack on the Japanese aircraft carrier Sōryū, but Sōryū evaded his torpedo. Rather than banking away from the ship and presenting a larger target to its anti-aircraft gunners, Gay continued in toward the carrier at low altitude. He then brought his Devastator into a tight turn as he approached the carrier's island, and flew aft along the flight deck's length, thus evading anti-aircraft fire. He later stated he had a "split second" thought of crashing into the Japanese aircraft he saw being serviced on the flight deck.[1]

— George H. Gay[1]
With his aircraft still in relatively good condition, he decided to make for Hornet after clearing the Japanese carrier. However, five Mitsubishi A6M Zeros brought his aircraft down in a hail of machine gun and cannon fire, killing his rear gunner, ARM3c Robert K. Huntington.[1][4]

Exiting his aircraft, and floating in the ocean, he hid under his seat cushion for hours to avoid Japanese strafing attacks and witnessed the subsequent dive bombing attacks and sinking of three of the four Japanese aircraft carriers present.[5]

After dark, Gay felt it was safe to inflate his life raft. He was rescued by a Navy Consolidated PBY Catalina after spending over 30 hours in the water. Gay was later flown to USS Vincennes (arriving June 28, 1942), before being transferred home.[6] Of the squadron's thirty pilots and radiomen, Gay was the only survivor.

Bob, the kid in me made up that story. I don't know about you, but when I grew up, I had a vivid imagination. We'd play Combat with our rifles in front of our house, one friend would be Cage, another Kirby, we'd select one for Sergeant Saunders and of course another, the lieutenant (who'd wind up sacrificing himself as on the show), another a captured German. We had air battles with our 1/72nd and 1/48th static plastic scale model airplanes.

On the ground we'd set up our plastic men, then shoot at each other's side with a slingshot.

throwing $0.10 chuck gliders, $.15 rubber powered Skeeters and $0.25 rubber powered with landing gear Sleek Streeks. A friend, Terry would move his Sleek Streek wing all forward, on full power it would do at least 3 loops when there was no or little wind.

we'd share a pop bottle with each other, not even bothering to wipe off the neck.

We never thought of germs, yet we didn't get sick

doing that during Summer.

Enjoyed your story George.  Boys will be boys.

My experiences were on about the same level of evil.  Perhaps a little more so.  I ran in the Soap Box Derby for two years keeping my helmets.  One day I brought them over to a friend's house along with my BB gun.  He had a BB gun too.  We played war in his barn hiding out and taking pot shots at each other.  Luckly, no eyes were put out but I had holes in those helmets at the end of the day.

Same friend.  We would take lighter fluid to the tails of our Guillows models lite them off and launch them into his field.  Lucky again, the fire dept didn't need to be called but it was a thrilling sight.

I figured out the Helldiver.

There is a catch on the spring.  A finger pushed down through the cockpit activates it.  Tie the third line to the canopy roller, guide it down through the tube molded into the fuel tank and out the false exhaust duct (or maybe that small hole pointed to by the screwdriver).  When the line is pulled it cams the canopy roller down opening the canopy, releases the catch and sends the pilot flying.

Simple.  I don't anticipate any problems putting it back together.  Better illustration: 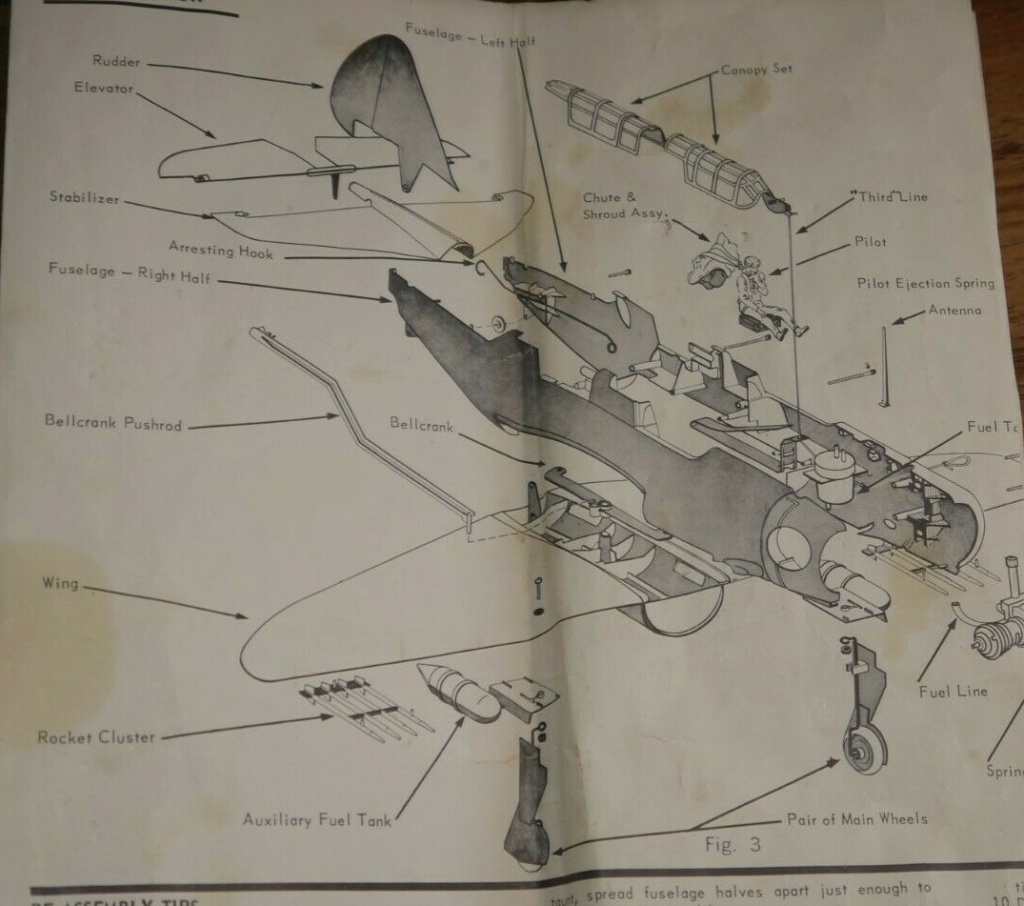 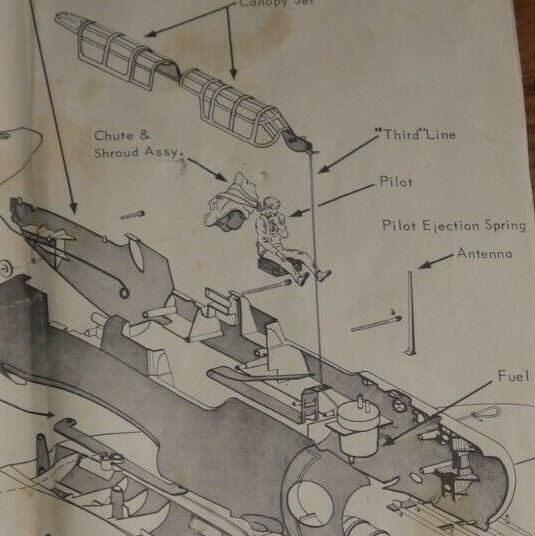 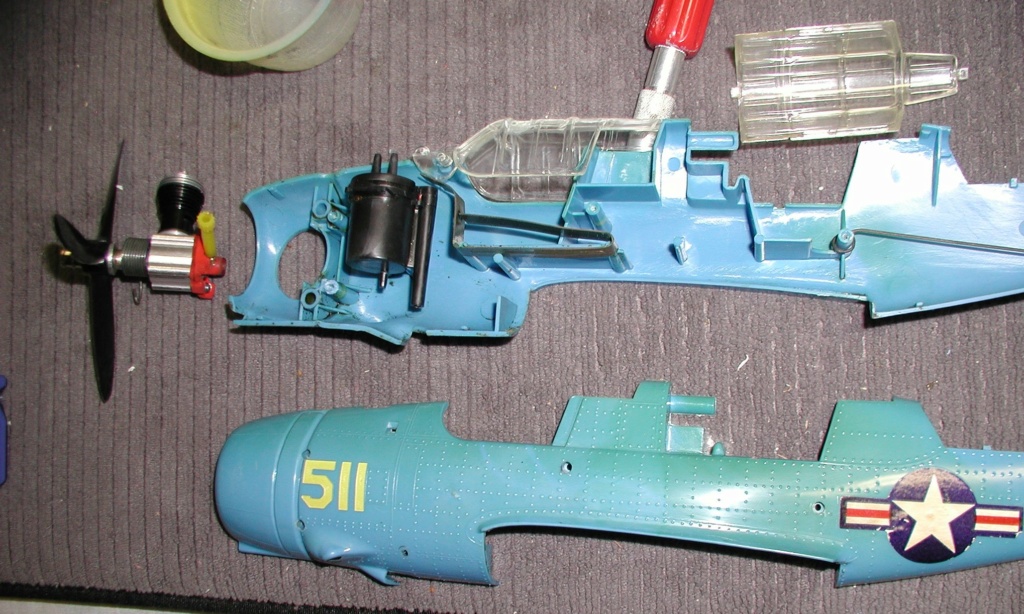 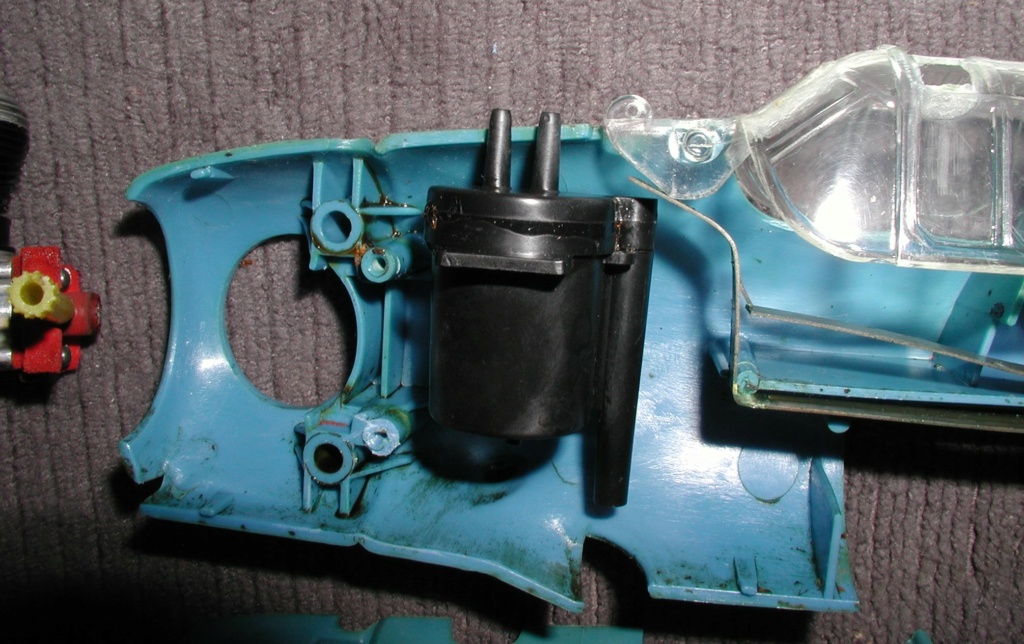 Elevator control rod activates in a different way from normal. 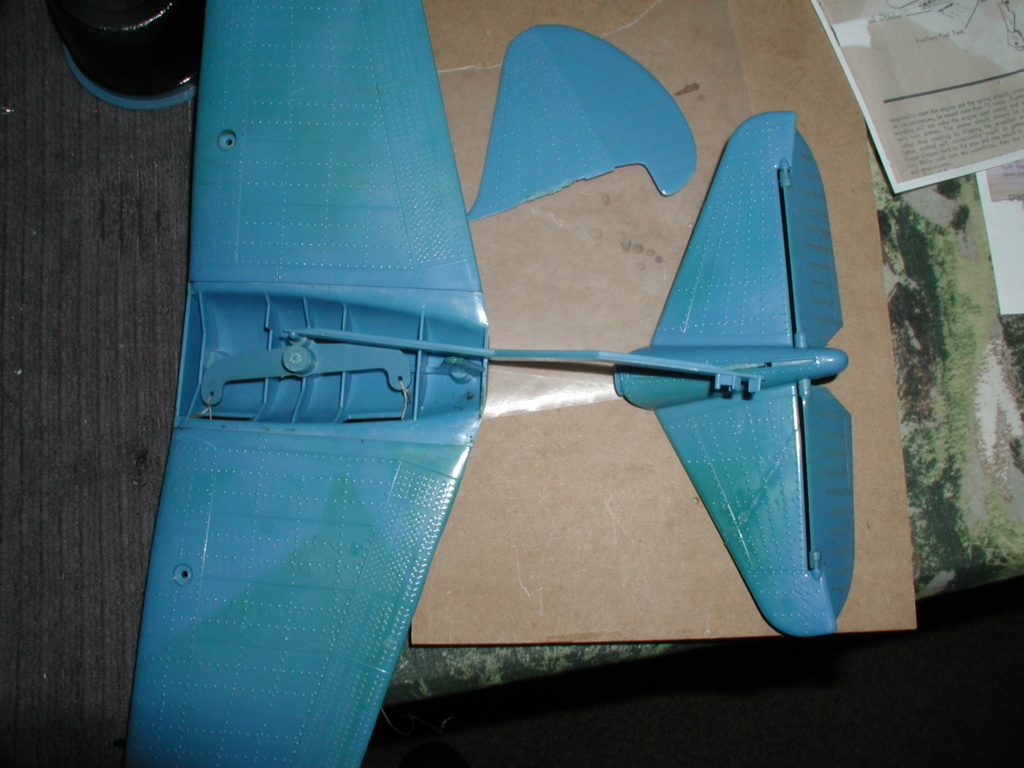 Cool ,A lot cleaner now too , are those your diagrams files ? The instructions sheets didn't have a HellDiver in them ... Maybe get them in there for the next person doing a repo. ?I wonder how the release worked , did you need another line to run to it ?

I see the arresting hook that is what that's for i guess .