This is next in line and I have been putting it off for over a year now. Kit is almost complete except firewall and bell crank platform. I hope to have it finished within the week. Kim gave me some excellent plans so I will probably finish it out Joe Wagner style.

Power plant will be primarily a Space Hopper, but I probably will affix the Flight Contest TD to the nose for a few laps. 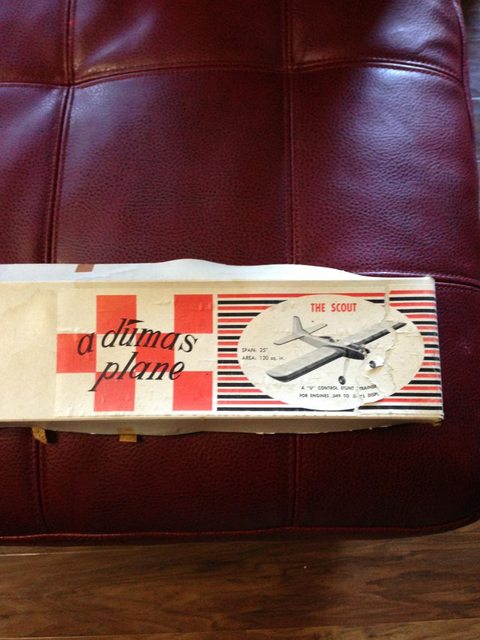 cribbs74 wrote: This is next in line and I have been putting it off for over a year now. Kit is almost complete except firewall and bell crank platform. I hope to have it finished within the week. Kim gave me some excellent plans so I will probably finish it out Joe Wagner style.

Power plant will be primarily a Space Hopper, but I probably will affix the Flight Contest TD to the nose for a few laps.

Ron, I have a question...what do you mean by Joe Wagner style? Joe Wagner designed it.

It was originally designed for an OK Cub (.049). It should really move out with a Space Hopper or a TD. Be sure to use at least 42' lines.

Since the original had the Cub radially mounted, you will need to move the firewall back a bit to accommodate the SH's rear intake. Assuming you are adding beam mounts, are you mounting the engine upright or inverted?

Mine has an OK Cub .049B with a pull-string starter (for nose weight) because it came out a tad tail heavy. :-(

I had bought a set of plans from someplace that did not specify balsa thicknesses and I "overbuilt" it. Later got an EXCELLENT set of plans directly from Joe Wagner.

I think my next one will have 10% larger wings to handle more power.

You are correct it was designed by Joe. Sometime throughout the course of the kit run it was modified. The differences are subtle the stab and rudder became smaller and some other minor things.

I think Kim has pictures of both versions and you can tell the difference.

I will be using original space hopper mounts and the engine will be mounted vertically. The kit instructions show firewall placement for different style of mounts. The one for the Holland Hornet will be close.

Looks like J.E. Barr is the one who designed the Dumas version. 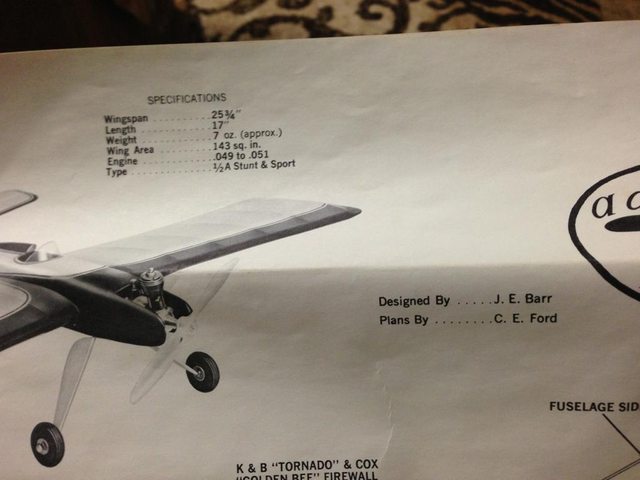 Yeah, I talked to Joe at one of the S.M.A.L.L. Fly-Ins in Little Rock years ago. He said that when Dumas bought the kit rights, they changed some of the dimensions, but still used the assembly drawings and artwork from the original VECO kits.

I've got my Uncle's Dumas version and a plans-built project. Still looking for the photos I took of them parked side-by-side.

A wing is born!

I wish I had kept those pics Kim. 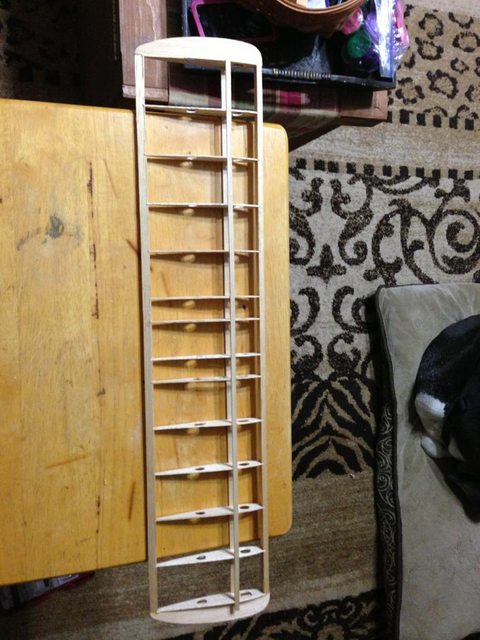 The Dumas Scout my Uncle Wayne built in 1969: 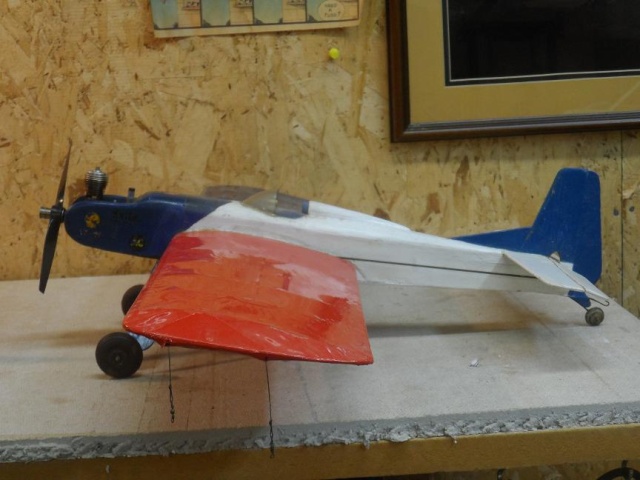 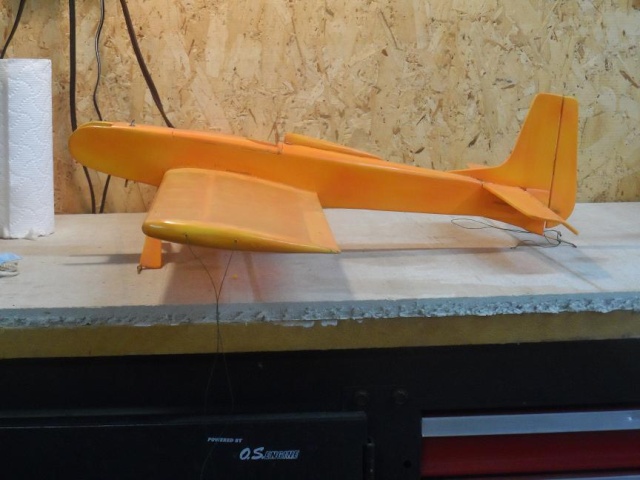 Any suggestions on how to do those solid tips? Maybe I can trace the flat tips onto some Balsa block and just sand away.

Also it appears I am missing the headrest is that solid block also? Or is it built up?

Ron, the success in carving tips is in the wood choice itself, You don't want hard balsa. You want straight grained light balsa. You will almost leave finger impressions on it if squeezed, there's no mistaking it. Drawing a centerline around the perimeter in ballpoint pen works quite well. Don't leave any ballpoint pen inking if your doping as it will bleed quite badly. Once glued on, you can use a #26 X-acto blade which is quite long and thicker then a #11. You should be able to pare off the wood from tip rib to your centerline with a good bit of accuracy leaving enough material to sand to final shape. Kinda of in the same way one would peel an apple using your thumb and forefinger.

Personally, for a 1/2A I wouldn't make a solid tip and would use 3/32" flat tips and riblets just like any other wingtip. When tips like that are narrow in width, the triangular gussets are usually not necessary. You can just glue scraps onto the tip at the leading edge and trailing edge and fair them into the flat tip omitting the need for any additional bracing in the middle. The covering will span that just fine without sagging.Ken

Yeah, you can build them up pretty easy. I just traced the rib pattern (headrest also) on some blocks I had and went after them with a carving blade....more or less just for the old-school fun of it.

I used a rounded-tip sanding bit in my Dremel to hollow them out a bit also.

1968 or so, Bobby poses with his dad's first Scout, along with one of Wayne's scratch-built UC's . We literally flew this Scout to pieces, so he built another...the one I have now. Wayne was given a wrecked Goldberg "Starduster" and used it's tail-plane for the wing of the other model. 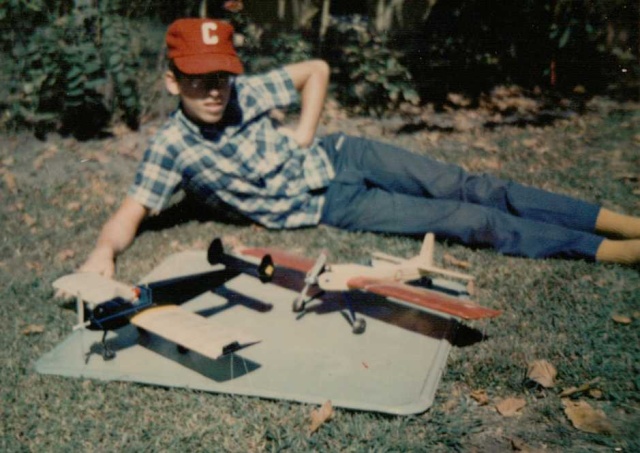 Kim, is that a little Ercoupe in the foreground? Awesome little plane. You seem to always have some cool pictures. Ken

Hey Ken, it's definitely Ercoupish, but I think Wayne's inspiration came from a design in a 1968 copy M.A.N. I'm watching for that issue and will post it here when I see it. It was a larger plane and the designer had it set up with a throttle and J. Roberts bellcrank...I think.

My family DOES have another link to the 'Coupes. Here's photo of my big brother A.J.--Flying the Colors from the cockpit of his '47 'Coupe: 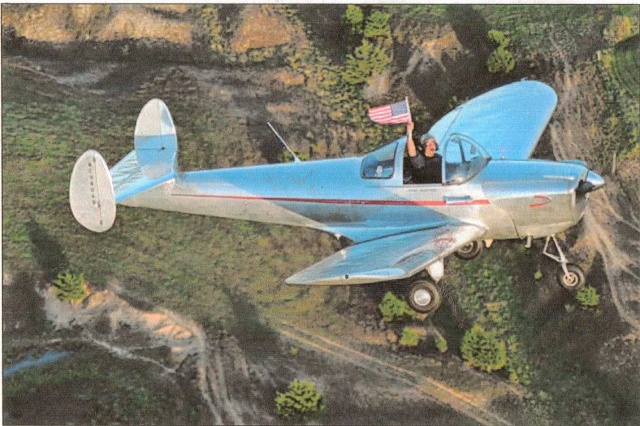 And visiting the Cape Airport 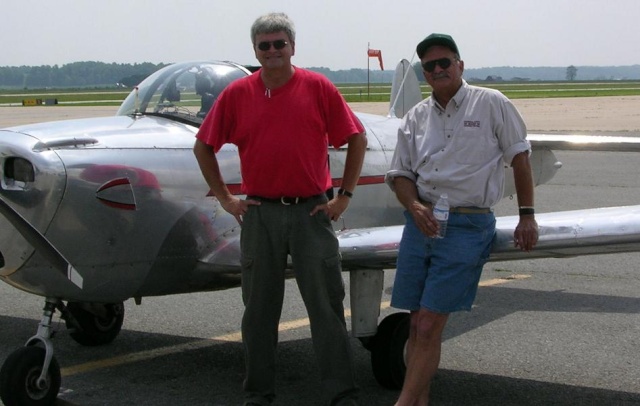 Kim, I have several of Joe Wagner's plans. All of them contain some "insights" about the design...like the prototype airfoil on the Scout plans as well as the final version. Also notice how he applied out thrust with the engine. The prop is kept on the centerline while the engine is moved inboard and the firewall tilted. Unique. Most just tilt the engine (often with washers) and leave the prop off-center.

I always had my cargo trailer with me on my trips to the Little Rock S.M.A.L.L. Fly-Ins, and on one occasion, his son asked if they might store some large Free-Flight Planes in it to avoid breaking them down to fit in their cars. Was I Honored !!!! Felt like "Shrining" the trailer!!!!!

Got some photos somewhere, and will post them on a new thread to discontinue this high-jacking of Ron's !!!!

I never get bent out of shape over High Jack's. Feel free to post whatever.

I assume to calculate the Area it's Span X Chord? Either way it's definitely more than 120" so it should be a decent little stunter.

Right, and with that squarish wing, you'd have a hard time botching the math.

Right, and with that squarish wing, you'd have a hard time botching the math.

That's a good website in case you haven't seen it yet.

Thanks for the link Rusty.

I have been so busy flying that I have been slow going on this project. I did however, spend some time on it tonight. Lot of little things going on in this kit and it takes some time to get it right. The kit was missing all the ply pieces so I had to fabricate the firewall and landing gear plates along with the bellcrank mount.

I also quick mounted the Space Hopper so you can get an idea of how it will look. 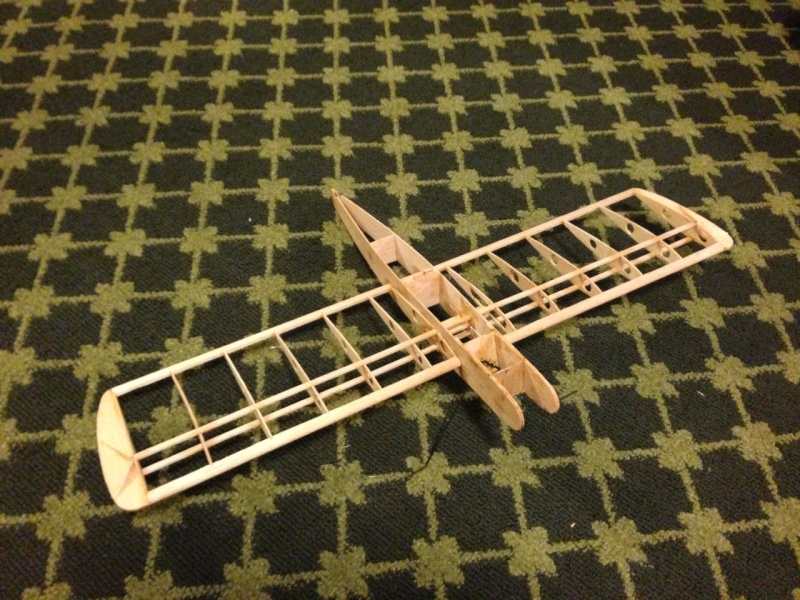 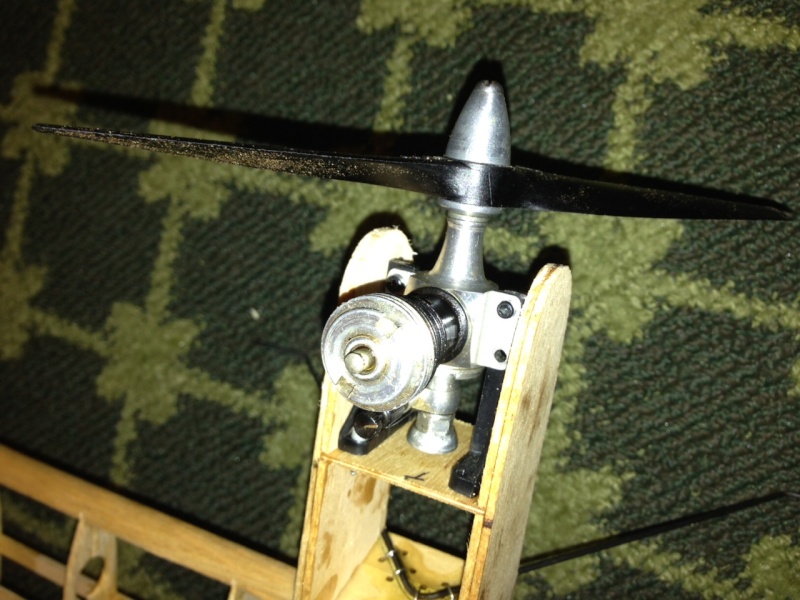 Looking good. What thickness are the fuselage sides? Do the doublets extend past the leading edge?

The fuselage sides are 1/16" as are the doublers. They do extend ever so slighly past the leading edge. It looks flimsy, but is actually somewhat strong.

Looks good. Where did you find those long mounts for the space hopper?

Funny story, they are actually original Space Hopper mounts that I found at a swap meet. I didn't know what they were for until after I aquired the Hopper. Rolla sent me a pic of the original mounts and lo and behold they were the correct ones.

I have another set that Mark B. sent me as well.

And fly it shall! I'll be sending you the instruction sheet when I am done. Here is tonights progress... Thanks to Doug for the 1 1/4" Veco wheels. 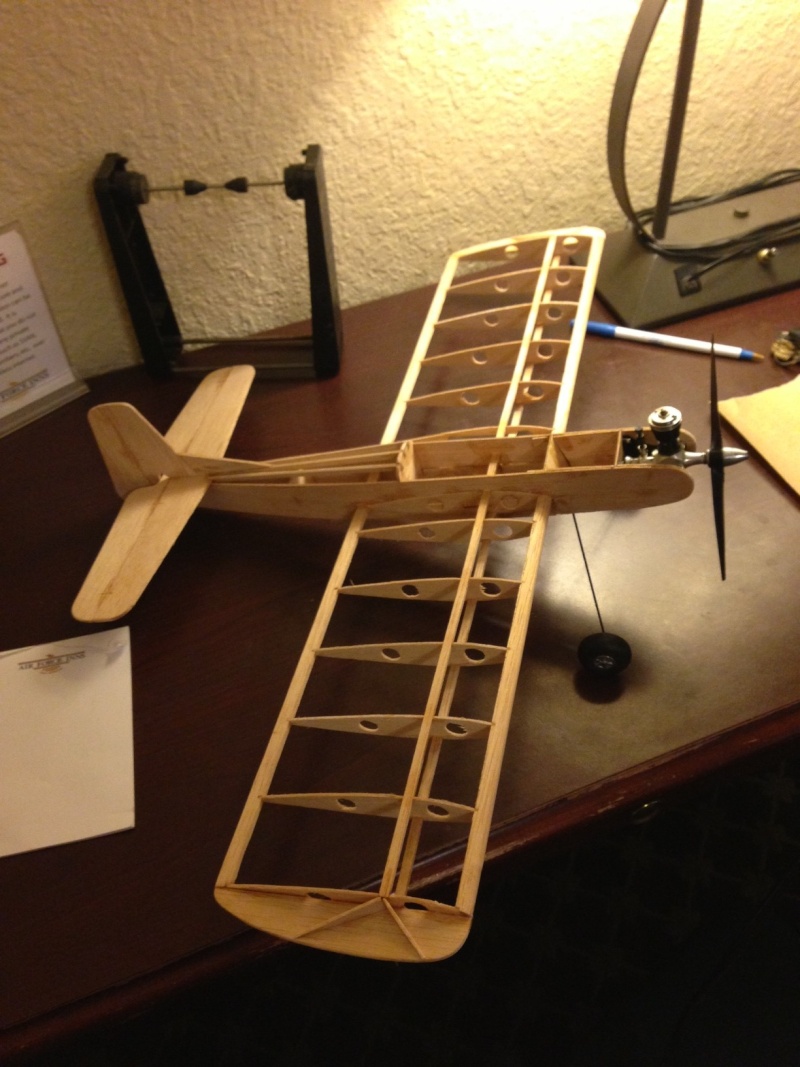 Tonight I added the control assembly and the cowl block. I assume there is supposed to be a cockpit cutout even though the instructions don't show it. I also need to figure out a way to make a windshield and affix it somehow. Any ideas? 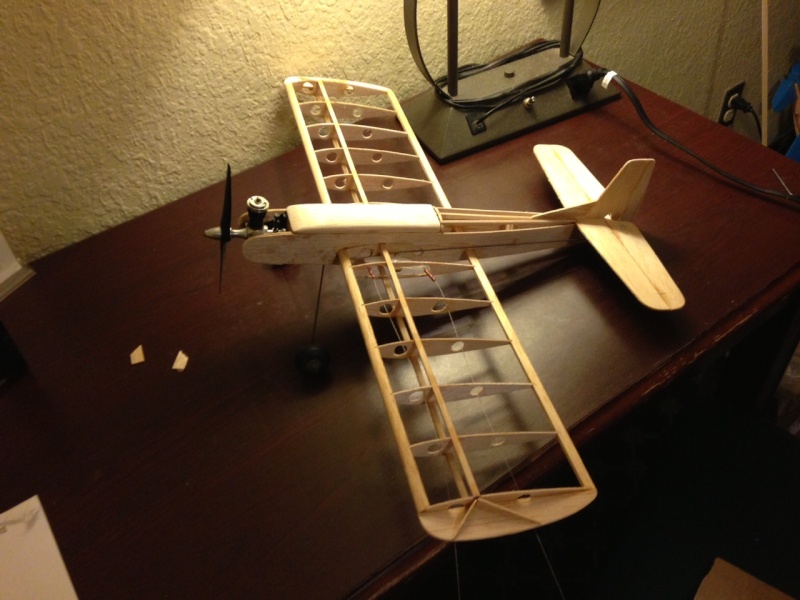