» The resurrection of the frankenplane
by davidll1984 Today at 6:50 am

» Crash Free weekend and I did Fly
by Yabby Today at 5:04 am

» music vids.. some of your favorites
by cstatman Yesterday at 10:42 pm

» Just HOW do you test compression??
by Surfer_kris Yesterday at 6:15 pm

» ***The World's Smallest Traveling Engine*** SIGN UP!
by jmendoza Yesterday at 4:14 am

I got this OS .35 FP on a Skyray that, though has the looks of a beater, is really in airworthy shape. The engine was a little stiff, so I splashed some alcohol behind the drive plate and in the exhaust and venturi and turned it over a few turns. Then shook it out and drenched everything with air tool oil. It feels pretty good now, but I thought I should ask before cranking it. Is there any reason I should dismount it and open it up? Any possibility of a Fox-like stuck con rod or anything? Or should I just kick the tire and light the fire?

If concerned, I would pull the backplate and spray some PB Blaster in there and work the rod back and forth on the wrist pin. Personally, I would run it. Keep in mind you could damage the backplate gasket. This is where the Permatex Anaerobic gasket maker is very handy. A little info on the .35. They were made in iron piston and also ABN versions. I know I made mention of this to you, but I can't remember but I believe you may have the iron piston version. This is detectable by the bulge on the bypass. Another way to tell is the casting on the case, the wording looks more like it's italicized on the ABN versions. The rods are bushed on both ends of the FP .35-40. The wrist pin has Teflon end pads on both ends of it. The FP .35-.40 share the same crank, rod , crankcase but have a different liner, wrist pin and also piston obviously. The FP engines are also complimented by a fully bushed case unlike the LA series which has to pressed in oilite bearings. I personally have found the .35 to be easier to tame then the .40. I have some great running .40's and no retiming or mods have been done to them. I've seen some engines totally @#$%'d up from people retiming the liner or changing the head. Run the engine with a low pitch prop. The APC 10.5 x 4.5 prop is a very good prop to use on these engines. A 10x5 or 10x6 will turn that Skyray into a combat plane real fast. The engine needs to rev very high and the prop I recommended will do that. You probably won't like the price. These run about $4-5 a piece.

While some claim the iron piston needs the full castor treatment, I've seen many of them run on 50/50 just fine. Keep in mind these were geared initially towards the r/c crowd and there choice of fuels is usually waaaaaay low on oil compared to ours. Then again, they're not dragging two sixty foot lines around for 7 minutes at a time at full throttle. Your Powermaster has enough oil in that fuel to run that engine perfectly without concerns of damage. That's all I run my Fox's on.

I can only assume since the engine is mounted and the plane apparently has been flown that there was no runaway issues and therefore the head has the proper head gasket amount and the venturi is the correct size. Check the wing for twists or warps and go out and fly that thing. Ken

Believe it or not you can use a high power magnet and identify the liner without dissassembly.  (Iron vs not-iron) I use a name tag back with some rare earth magnets.  Mere ceramic magnets are not strong enough.

I was told by a reliable source, that the older steel liner has the OS Max FP vertically on the engine and horizontally on the newer engines. Great engine! It might be a little much for the Skyray 35. My son flies two of them on .25FP's in beginner stunt, with all the power it needs. It might even be a little nose heavy. It will most likely fly the pattern better than your Shoestring.

@duke.johnson wrote:I was told by a reliable source, that the older steel liner has the OS Max FP vertically on the engine and horizontally on the newer engines. Great engine! It might be a little much for the Skyray 35.  My son flies two of them on .25FP's in beginner stunt, with all the power it needs.  It might even be a little nose heavy. It will most likely fly the pattern better than your Shoestring.

I'll check for that, Duke. Ken identified them Sunday by the shape of the outer liner. But like I told him at the time, I would forget, and sure enough, I did. Yeah, I'm hoping the Shoestring is exacerbating some of my bad shapes. I'll find out soon. I have a big flapless Clown of some sort with an OS .40 on it too.
_________________
Don't Panic!
...and never Ever think about how good you are at something...
while you're doing it!

I'm still under the opinion that the small loops are from your deep 1/2A roots. I was doing the same thing at first until those I flew with kept telling me to open them up. Unlike you this was all new to me so it was easy to correct. You have been flying 1/2A as long as I have been alive so it only makes sense.

It's probably something that will correct itself over time. If you look at the OTS pattern it's flown with large loops and rounded corners due to the limitations of the airframes at the time. Your Shoestring while not OTS legal still utilizes the technology of that time. So I guess what I am saying is that even though your Skyray is newer with more span it won't correct the tightness of the loops. It will probably make it worse.

Keep in mind I don't have the experience you do so don't think I am talking down to you cause I ain't. It takes a good bit of skill to take 3rd in your first contest.

Unless there were only three of you...

I just re-read your post. It will clean up the shapes of square loops, wingovers and such just not loops. I really need to read more closely.

When you have time I would love to see some pics of your .40 powered flapless Clown.

I started doing that in practice a couple of weeks ago and flew better shapes, but when the official flight started I flew less relaxed. I really wasn't nervous, just not carefree and loose. And cold as heck, too. It had warmed up nicely by the time I flew again though.

@duke.johnson wrote:I was told by a reliable source, that the older steel liner has the OS Max FP vertically on the engine and horizontally on the newer engines. Great engine! It might be a little much for the Skyray 35.  My son flies two of them on .25FP's in beginner stunt, with all the power it needs.  It might even be a little nose heavy. It will most likely fly the pattern better than your Shoestring.

Jacob, you beat me to it. I was just about to give him the business.

They posted 13 spam posts in under 10 minutes!

Here's another question I've been meaning to ask about the fp; since the glow plug has no identifying markings I can identify, I was wondering if my spare OS8 mediums are a good choice. And if I prefer to run a wet 2-stroke, would a hot plug be a better choice than the medium? Same question for my one fp.40

Rusty, I can't recall what OS did but they did change their numerical system on one of the plugs. I may be incorrect, but the hot plug maybe now designated the A3. The A3 I believe is what comes with the engine stock and is pretty close to the #8. It works fine with most fuels even 5%.  The OS #8 is a medium heat range and would probably work just fine.  If it's working, leave it. If stumbling or fouling occurs you will certainly recognize it. Listen for when you remove the glow plug igniter and check if you have a rpm drop. Again, in my opinion you want the hottest plug you can find. My experience has shown the Thunderbolt r/c long is the best plug for that engine next to a Enya #3. These plugs will almost last for an infinite amount of time and run perfect with 5%-10% fuel. With these engines, you will notice a change in power going from 5-10 % fuels not to mention your run times will be slightly shorter using 10%.

These engines really don't run a 4-2 break. They run just as you like to run it in a wet two with a slight break when pointed skyward. If the break becomes too harsh and the engine really speeds up, add an additional head gasket or try and cut back on your nitro. This is also amplified by using restrictive mufflers as these engines are not tolerant of heat. It will experience the problems your .25 was going through and the .40 will take off like a runaway freight train. Many times, some have the head hemi'd to lower the compression to avoid this problem. This is what head gaskets do as well. This however really cuts back on the power. Run the engine first and fly the plane and see how it does. I feel someone already invested the time into that .40 to make it run correctly for our useage. Ken

@afml wrote:"My experience has shown the Thunderbolt r/c long is the best plug for that engine "

Hi Wes, thanks for chipping in.
I haven't gotten around to the fp.40 yet, but after flying the .35 first with the prop that was on it when I got it, I put on a prop similar to Ken's recommendation and it's perfect, wet 2, no break and 5.03 second laps. A very pleasant surprise. Now I can go out and just fly patterns and learn. This one doesn't have any signs of needing a new glow plug, but if I get bored at the field, I'll screw in an OS8 and see what happens.
_________________
Don't Panic!
...and never Ever think about how good you are at something...
while you're doing it!

i'll third that! i really like those plugs, I've also had good luck with Swanson Fireballs.

I'll 4th that. Thunderbolts will take care of any quirky little problems you might have. They are around $5 a plug, but well worth it. I would have one in on contest day...

@Mark Boesen wrote:i'll third that! i really like those plugs, I've also had good luck with Swanson Fireballs.

@Cribbs74 wrote:I'll 4th that. Thunderbolts will take care of any quirky little problems you might have. They are around $5 a plug, but well worth it. I would have one in on contest day...

Okay, I can't ignore that kind of resounding testimonial advice. Thunderbolt R/C long and Swanson Fireballs. And Ken has mentioned one or both in the past too. Besides, they have cool names, I'll look them up. Thanks guys.

I guess I've been away too long, just saw the price of Thunderbolts! They used to be a lower priced plug, sold thru Hobby Shack, now Hobby People.

Folks probably realized they were a good plug. And the price rose accordingly.

Is this the one? 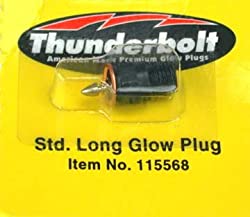