No. RC long not standard long 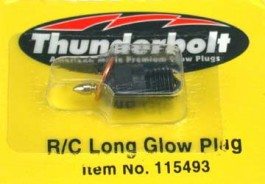 you want a 'hotter plug' and many will use the 4 cycle plug, i've had good luck with the standard as well as the R/C, the thought with the r/c plug was the idle bar would shield the coil a little on a rich needle, don't know if thats true or not but sounds reasonable.

Perhaps that's why it works so well on the Fox? Who knows all I know is from experience my runs have been amazing with the Thunderbolt and Powermaster 10/22

yep, i liked them in foxes too.

Okay, let's take another tack in my stunt engine education. Since I don't know much about the differences between engines of this category. I've read that the la25 is a good choice for the Skyray, but my Ray flies perfectly with the fp35. Are those two engines of comparable power output? My plane has been modified with added 2" fixed flaps, longer wingtips(46") and larger stab/elevator, so maybe that's the reason if it's a little heavier than a box stock Skyray???

Just a recap on the plugs. You've heard me mention many times about Fox plugs. All I can say is everyone has different experiences. I'm not out every now and then for 1-2 flights a day and pack it in for a few months. That being said, the Fox plug may work fine for those users. But what I do notice, the Fox plug glows extremely bright. This is due to the overly thin element which is susceptible to burning out rapidly and also quick to develop white deposits within the coil. The THunderbolt also glows extremely bright which is what were seeking in terms of a hot plug but the coil is a higher quality and is much more durable. Many Fox plugs will blow the insulator right out of the plug in which the hex just stays in the cylinder. The insulator will also just come loose and wiggle. I haven't experienced this with Thunderbolts.

The OS #8 is a pretty universal plug and as I mentioned before, it comes stock with the LA series engines. It should work just fine with the 10-22. When one also says why all the hub bub over a plug or fuel. Just tell them to take their plane out to the circle when the judges are waiting for your hand signal to go. You want reliable quick starts. Why add one more complication?

The Fp engines are a high quality engine for a bushed engine.The FP has an additional port cut into the liner unlike the LA. The early LA .40 had a similar port in the liner and this didn't work well for stunt useage therefore certain mods were done to fill this in. The Fp has this similar cutout in the liner but it doesn't seem to do the same as the LA did. The later LA's no longer have that cutout in the liner.  They have 6 head bolts unlike the LA which has 4. The LA uses a JIS phillips screw which strips the head out just looking at it while the FP uses socket head cap screws. The fix is to use the screws from a FP in the LA they do interchange. The FP came with the proper OS needle valve for up front. The LA uses the rear remote. A nice feature, too bad it doesn't work properly due to too coarse of threads and also a lag in adjusting the speed. It also complicates starting due to the fuel trying to always siphon back into the tank. The FP has a fully bushed bronze bearing that supports the entire shaft unlike the LA which has two separate and smaller bearings which the crank is supported by. Take note, it all comes down to the dollars. The FP has a metal backplate, the LA has plastic. The FP-S would come with 2 venturi's the LA has one. ALthough both engines are ABN, I've seen the LA wear right through the plating and although I've seen this on FP's, it took or seemed to take a lot longer to do so. One of my best running FP's has the Tower .40 piston liner in which is a drop in replacement part and is actually a true ABC piston liner. The Tower .40 is a 100% identical clone to the FP.40 with the exception of a different head design which I feel lends the Tower .40 to be a slightly better running engine when using for stunt combined with the proper amount of head gaskets. I'm not downing the LA engines in anyway. I love them and I own a dozen of various sizes. They're truly remarkable and reliable for the price.

The LA.25 would fly your Skyray well. I don't subscribe to the stock mufflers like some claim. I look at it this way, it's better to have too much power than not enough. It's always easier to detune the power than to run a engine at it's maximum horsepower. If it's working , go fly. Ken

The FP20 and the LA25 with the OS 2030 muffler just happens to be a "piped" configuration at a useful RPM. This is why some people tout this configuration. (No other "stock" muffler on these two engines will do this effect)

I chose the 25LA for the Flite Streak I am starting to build (and my neighbor gave me 2 with the correct muffler). I made plywood rib templates yesterday, they need some sanding to final size. Soon to be rib cutting.

I need to find the engine setup cookbook for prop, ground RPM and such. 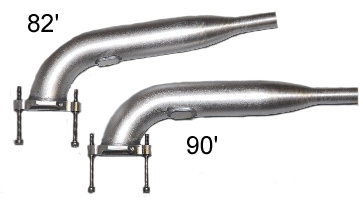 Phil, I can say with the utmost certainty, that when I listened to what claimed to work, I was highly disatisfied. I found that all of the LA mufflers work horribly. This goes for the .15 -.65. The muffler is too heavy for control line use, it has too many internal parts which work well for muffling, but it hurts the performance incredibly. Bar none, the best muffler for any of the LA engines is a Randy Smith Aeroproducts tongue muffler. Drill the holes out to 3/32". Don't add any additional holes and if the engine is still getting hot, open a row up to 7/64". This is about the max you can open the holes without breaking into the ones next to it. Tap one of the holes for a pressure tap and run this to the uniflow pipe on the tank and never look back.   I have used the stock mufflers , but the first thing I do is to gut them and get rid of that stupid useless cone inside. Get rid of the bolt holding the entire assembly and JB weld the muffler together. This will save you a automatic 1/2 oz.  . They do not work well and all they do is hold the engine back. Some claim they prevent the engine from winding up in the maneuvers. In order to wind up in the maneuvers you must first need to make it enter the maneuver. What I'm saying is the muffler is really killing off needed performance. When combined with the stock needle valve, your left with a engine that will be severly handicapped in the overhead maneuvers. These are based on my experience with the .25 mainly. I own and fly many Flite Streaks. I also prefer a constant run from start to finish. Some claim the 10x4 is the cat's meow for the Flite Streak. I dislike that prop. I prefer a 8x6 myself. I like the out of production Taipan gray and it's my prop choice on the Streak. It has the equivalent of a Master Airscrew 9x4 in my experience based on lap times and drive I receive from it but the 8" prop allows for a consistent rpm drive without loading the engine. Ken

Ken,
I will take your statements into consideration when I have a plane to fly.