Log in
Search
Latest topics
» Ringmaster rescue
by getback Today at 6:27 am

» The resurrection of the frankenplane
by davidll1984 Today at 12:50 am

You may remember that I messed up my Lew Woolard massaged Fox .40 in Wichita. With help from Marvin Denny and Ebay I managed to rebuild it. I had to modify the case and crank cutout to mimic Lew's work so I hope I got that right. I swapped the piston and sleeve. Good news is I have a brand new ABC cylinder set for the future. The engine is now a BB instead of a bushed crank. 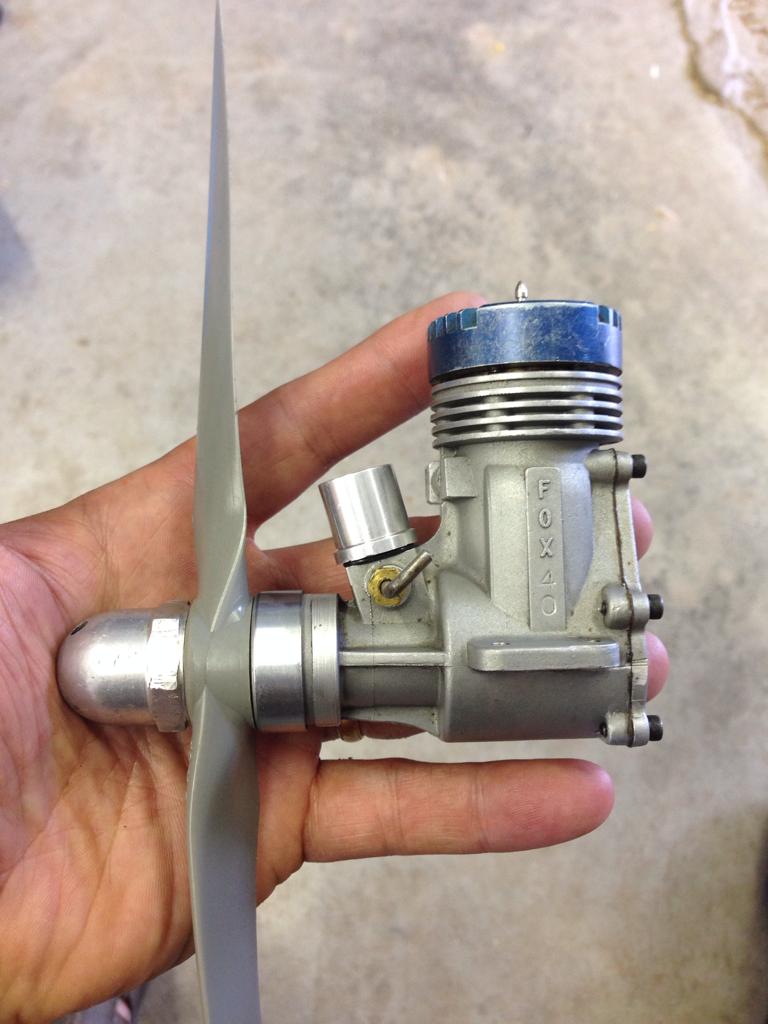 I've never seen a Fox like that. Not surprisingly. So, what, you took the Lew P/L out of the busted bushed crankcase and made it fit a BB crankcase? It'll probably be a lot faster with the bearings, Is that for the plane you busted at the contest?
Rusty
_________________
Don't Panic!
...and never Ever think about how good you are at something...
while you're doing it!

@RknRusty wrote:I've never seen a Fox like that. Not surprisingly. So, what, you took the Lew P/L out of the busted bushed crankcase and made it fit a BB crankcase? It'll probably be a lot faster with the bearings, Is that for the plane you busted at the contest?
Rusty

So yeah the P/C is one Lew modified and it's an ABC. The Head is a Hemi head. My little faux pas bent the crank and snapped off the mounting lug. The bushed crank and the BB crank are different. Lew modifies the case to bring the intake passage higher to meet up with the higher timed intake port on the cylinder. Also he cleans up the crank intake port and bevels all the edges and then modifies the intake with JB weld to make a sort of ramp to funnel in air/fuel. The P/C is extensively modified so that would have been a bear if it needed to be done.

The plane it was mounted in might be too far gone to repair. I haven't tossed it yet, it's kind of a shameful reminder about preparation.

I need an engine test stand!!!!

You could probably get a similar run from a massaged .40 FP, but I like American Iron, what can I say!

Ron, any of the coffin backplate Fox engines are extremely strong runners. Without the work that's been done, one would find these engines difficult to tame. I usually load them up with head gaskets and hemi the head out severely. .40 is the limiting displacement we use for speed limit combat. Unfortunately, we also find it difficult to tame the Fox .40 to get it to run the prescribed speed. They just take off. I don't own any ABC versions nor did I ever as all of them have been iron piston. I own the .36 MK engines in ABC versions but they're a different animal. These engines are a very good design. Not as fuel efficient as a modern .40 but I'm fine with that. For stunt, I generally lean towards my Brodak .40's and LA's. I can't say that I'm very fond of the FP.40. While I do have some real good runners, I prefer the Tower.40 which is a clone of the Fp. I find them to run more in my favor. Ken

I have a couple of Fox head button variations. They are both over the top compression wise. Not sure why they left the factory that way. Perhaps they work well for RC as they can be throttled back.

Not sure why you are having runaway issues. Mine is fine. I can't see the altered timing making a difference as that is done to support the 4-2.

The hemi head should be the ticket.

What is the purpose of the hemi head?

Good question. The hemi head actually lowers compression. It allows for more torque while in 4 cycle and smooths the transition from 4-2. Peak power is around the same.

Basically you don't go into a maneuver without enough power.