» Lots of entertainment today!
by getback Today at 7:28

» music vids.. some of your favorites
by Levent Suberk Yesterday at 5:53

Don't you have the pistol grip type in France?

OVERLORD wrote:Thanks Eric, In the first place, I'm wating for some descent weather. Yes, I need to buy a ne tank but I fitted another temporary tank for the first trials. My radio? I bought one this year, not a super expensive one: a T2M Pilot 6G , 6 channel 2,4 Ghz. 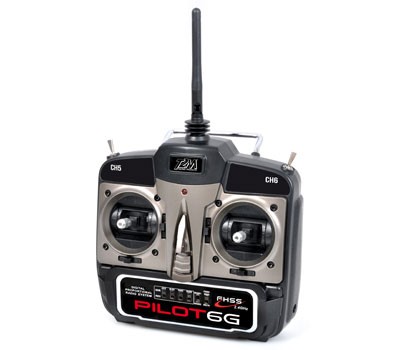 I just had a good look. It says "T2M Racing Products"!!! You can imagine how fast that car will go with that radio

Don't you have the pistol grip type in France?  Like this? 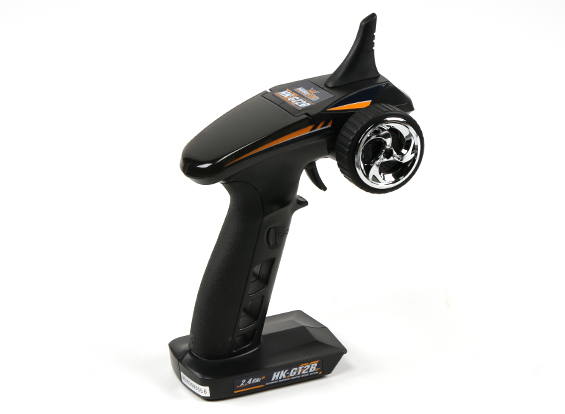 Much easier to drive with a steering wheel.

Yes, we have the pistol grip. Maybe I should give that a try. Does any other transmitter connect to the receiver that is actually on the car?

Yesterday, I started the engine and made a brief trial with the car. I found 2 problems:

Can I leave the weights as they are or do I need to roughen the surface a bit with fine sandpaper? 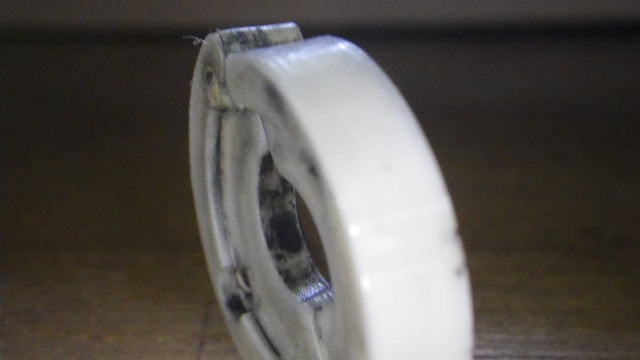 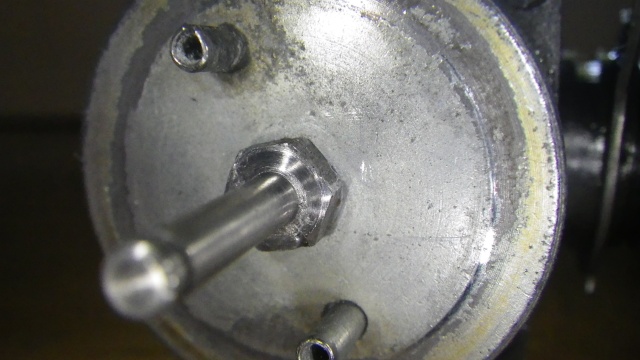 If it were me I would clean and lightly sand the clutch areas so as not to catch and jerk (use very fine sand paper) I don't have one but is my experience with clutch surfaces . Eric

getback wrote:If it were me I would clean and lightly sand the clutch areas so as not to catch and jerk (use very fine sand paper) I don't have one but is my experience with clutch surfaces . Eric

I agree with Eric. The surfaces are probably glazed from the heat of friction. Any idea what material the shoes/weights are made of? It looks like it might be a ceramic composite.

I'm curious whether a shield between the cylinder (exhaust-ports) and the clutch assy. might help keep oil-mist from making it's way inside? 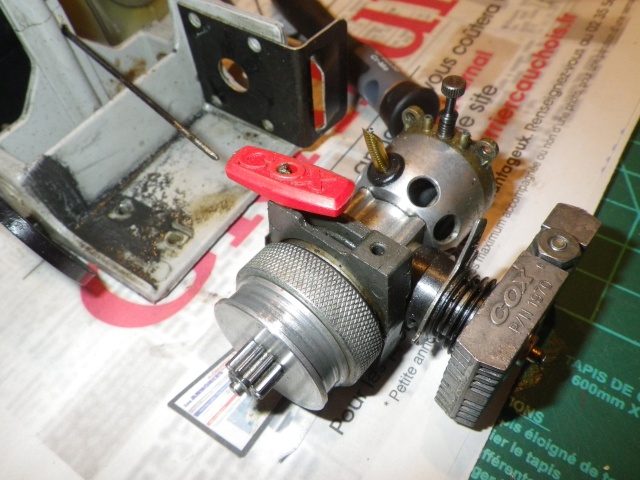 A thin sheet-metal (brass/tin)disc might fit between the pull-start housing and the cylinder. You could cut the disc's center out to fit over the crankshaft housing.. or square; the size of the case maybe? 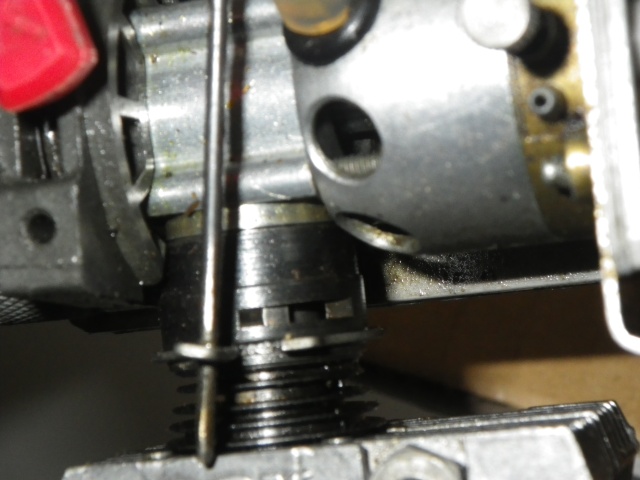 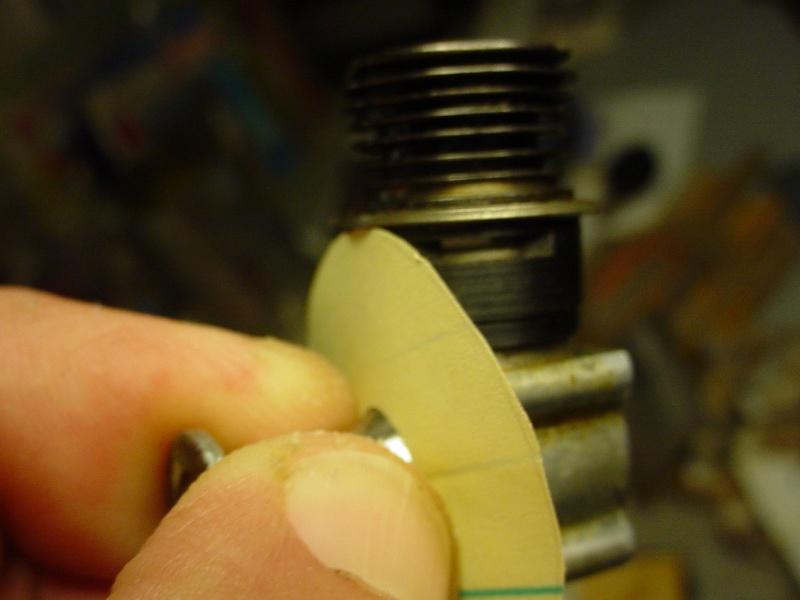 My disc could be a little bigger around. This one I cut to 35mm.

Thanks for the tips. I did some more adjustments today. To avoid the clutch housing outer edge turning against the fly wheel, I added three 3mm washers to the clutch shaft. Now there is even a mall space. I bent up the throttle rod end because that was rubbing against the heat sink. On the engine, the crank case gasket, rubber o ring and reed were replaced. I replaced the needle spring by silicon tubing. 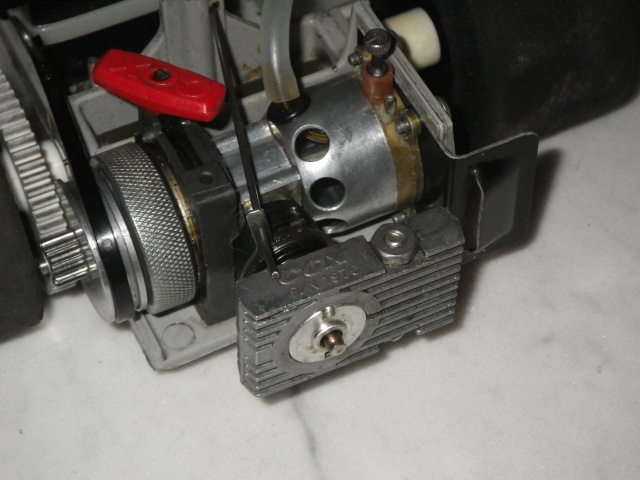 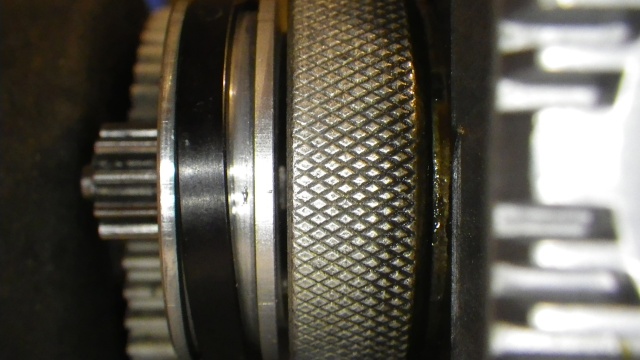 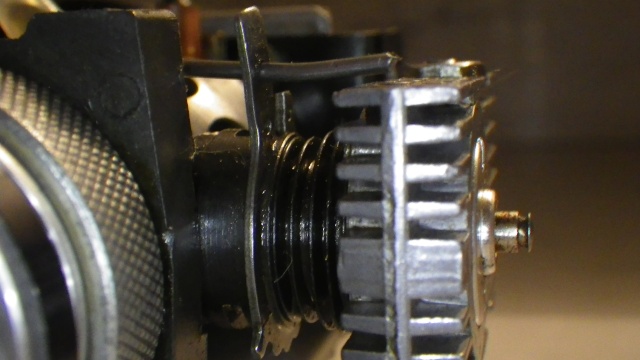 I don't know what the flywheel material is but I'll rub it with fine sand paper. I can do that without removing the engine. By removing a rear wheel and the big gear, I can get the clutch housing off.

Roddie, the disc is a good idea but I don't want to shield off the cylinder too much. What about a shield over the flywheel. I could use the free top hole in the grey pull starter assembly to fix a shield with a self tapping screw. 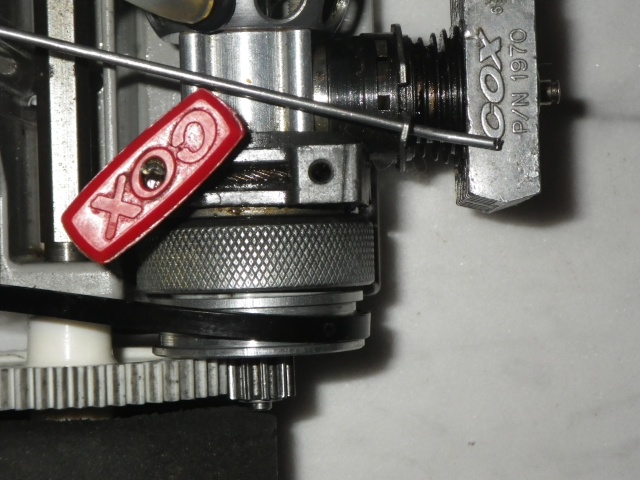 OVERLORD wrote:
Roddie, the disc is a good idea but I don't want to shield off the cylinder too much. What about a shield over the flywheel. I could use the free top hole in the grey pull starter assembly to fix a shield with a self tapping screw.
Lieven

It's only natural that things will need readjusting Lieven. Just about any design can be improved upon.. you know? The 3mm washers you added for example. Maybe the clutch will function better now. I was going to recommend the needle seal.. and I'm glad you've done that. Was the original and replacement reed the copper/star type? (just curious) I'm curious about a lot with this model.

I'd be careful with putting a screw for a shield in the pull-start housing. It would suck if it cracked. Maybe you don't have to worry about that.. but when the body is in place, the engine-bay must get fogged with oily exhaust mist.. I would think. I'm just concerned.. because you obviously want to run this model.. I would too. The foam tires could be hard to find now. Will they degrade with exposure to oil-mist? Just a question you might want to ponder.

I don't blame you for not wanting to obstruct cooling airflow to the cylinder. I would personally run fuel similar in blend to Sig 35%. Higher nitro will run cooler. This model was probably designed to run on the high-nitro Cox Racing Fuel blend.

This chassis below, you'll notice has a little pancake-fan mounted in the right-side rear.. probably powered by the Rx pack when the Rx is powered-up. I don't believe that yours uses this design.. but it might be worth looking into for a mod. 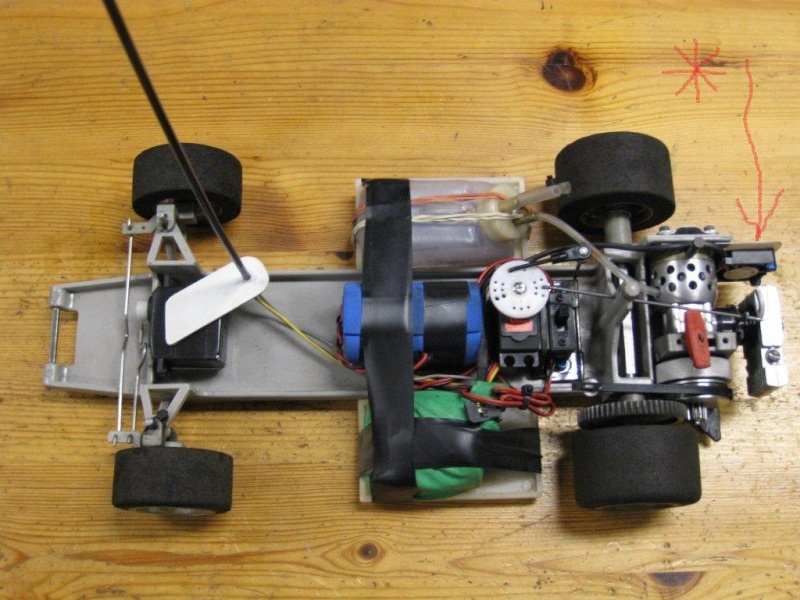 I'm sure that you could source a fan. Figure out the size that will fit (with the body on..) and make a new mounting plate for it.

This is yours.. correct? A different approach to bring in fresh air.. but only when at speed. 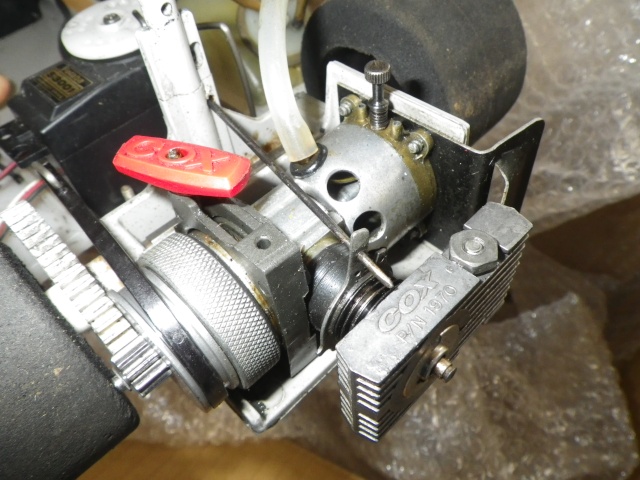 Here's my idea... find a suitable fan.. (if cheap.. 2 or 3) make a new plate and mount it in exhaust-mode. This will pull fresh air in from under and left-to-right. The fan would be subjected to exhaust wastes... but consider it a sacrificial part. (I'll bet that it would run fine for quite a while) It would help keep oil away from the clutch/drive primarily.. and help to cut down on oil-mist inside the model too. Once you get this thing running good.. it will run a long time on that "LeMans" tank.. Count on 20-30 minutes if full.

As said above, i went over the flyweights with sandpaper to remove the shiny surface. It was very rough now and I put everything back again. That was a few days ago and I tested the car immediately. What a deception.!!

It wasn't any better. I could do full throttle and still standing still, or the car would just creep....

I opened the clutch and could not see anything wrong; no grease or oïl. I googled on the computer to find some pics that would give me ideas or show something different with what I have. Détails about dismanteled Jerobees could not be found but when searching for "GTP NISSAN clutch" I stumbled on a picture of Jason out of a thread on our good forum. 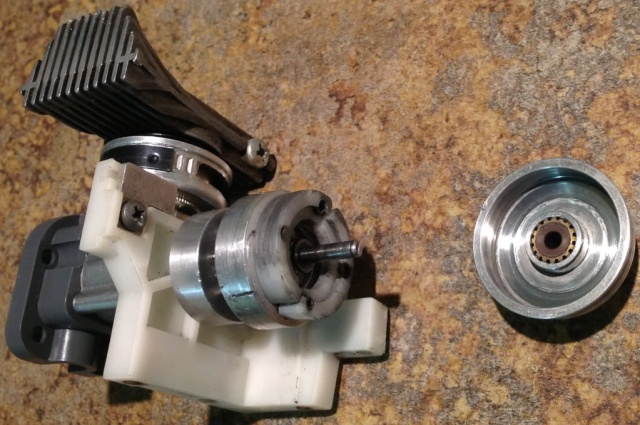 The flyweights are mounted as leading shoes (CCW running engine) to take advantage of the servo action when biting the clutch , just as in drum brakes. The drawing from the GTP NISSAN instruction indicate the same: leading shoes.

On the Corvette, I found them as trailing shoes (CW running engine) and always mounted them that way! 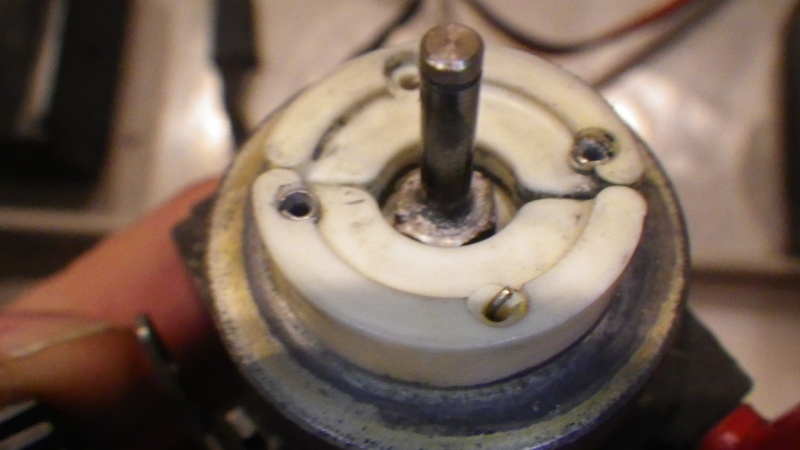 On other RC cars, they are mostly mounted that way. The flywheights of Alejo's Nissan in Columbia are also installed as trailing shoes.

I made the change and tested the car this afternoon. What a difference. Now the car goes like stink!

The area in my front driveway became suddenly too small.
After a few minutes, I heard a loud rattling noise coming from the engine. I stopped the engine and thought this was the end of my joy, fearing the worst. I found out that when pulling the cable, the flywheel would turn but not the engine. What a relief when I discovered that only the clutch shaft was undone.

Glad you got that worked out! Would love to see and hear a vid of it running!!!

Last Sunday, I had camera and GPS ready for the first trial. I drove off to the DIY parking lot. After fueling and a fresh loaded battery connected to the glow head, I could hardly start the engine. When it started, it ran rough, slow and stopped. It seemed I found the right needle setting but restarting was a nightmare. I then discovered a lot of play (again!!) of the crankshaft in the crankcase. The hardened goo must have loosened by the heat. That was the end of that. I immediately ordered a new crankcase and crankshaft from Matt and a spare assembly. I just saw that the package arrived yesterady at Ch. De Gaulle Airport and it's on its way to me. That's quite fast. I hope to test this week when the weather is fine.

Too bad about the engine but with the new will bee much stronger !!

in my pocket but after seeing Happydad putting hundreds into his bout done me in , I am glad your not too far deep in it soo far

Eric, I was just Lucky with the purchase. When checking EBay, these cars seem to be made of gold which is a pitty. Otherwise, there would be more people enjoying them! That goes also for the Cox Nissan.

It's time to complete this thread. The crankshaft / crankcase was replaced by a new one. I also modified the front body post. The body held on with a screw which is very discrete but not so practical. I couldn't find any suitable body post for sale and modified the existing one by drilling a 6mm hole and inserting a 6mm wooden dowel. To enlarge the hole in the body, never use a drill!! I use a hot brass pipe that I push through the lexan. I also put a bumper on the front. That is so much safer. It protects the steering components. 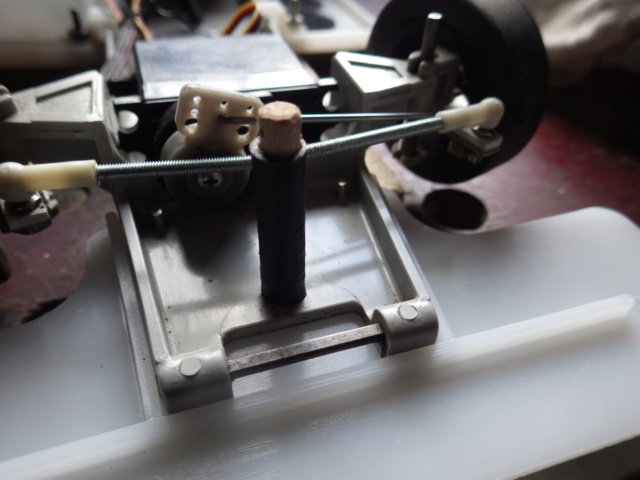 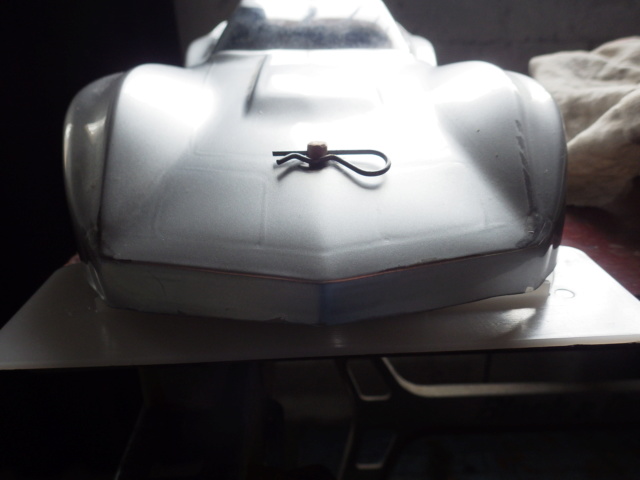 I made this video of the car running on my terrace. It was the only running car that was entered in the C A T S contest.

Afterwards I gave the chassis a good clean with household alcohol. I put the engine on a rag for a day at least so the oïl can drip out 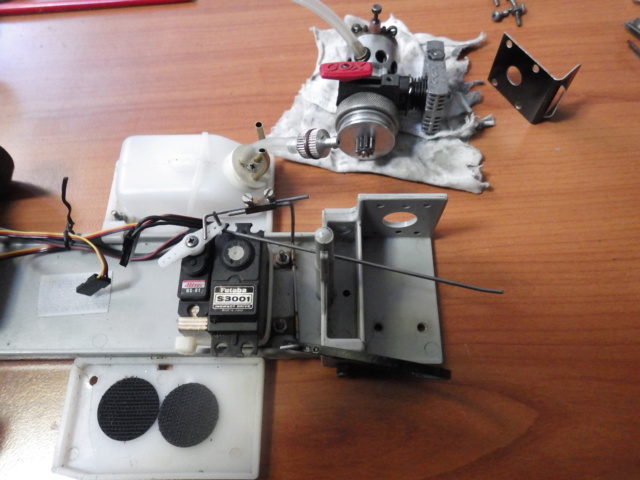 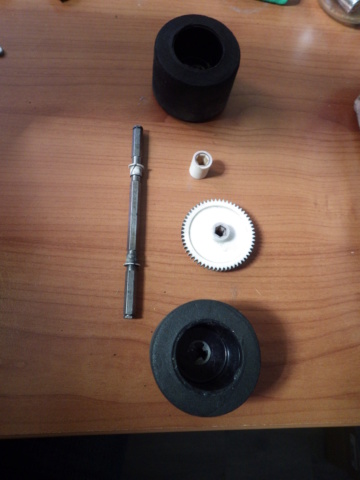 I found that the chassis pan was cracked. I will try to glue that together with Loctite cleaner and CA glue. 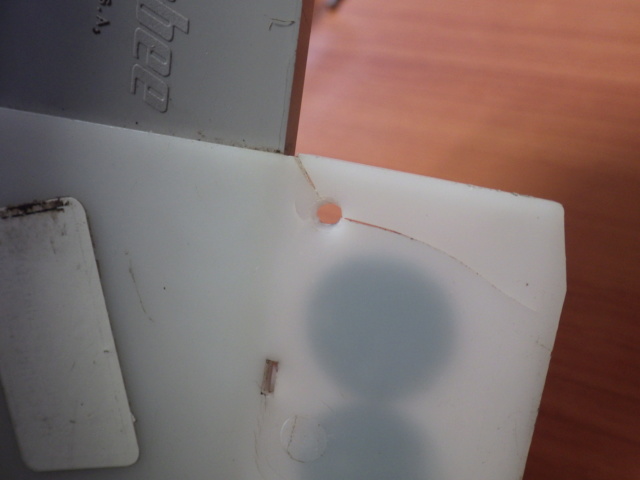 Your clutch reminds me of the clutch attached to my latest Enya only nylon? instead of metal. 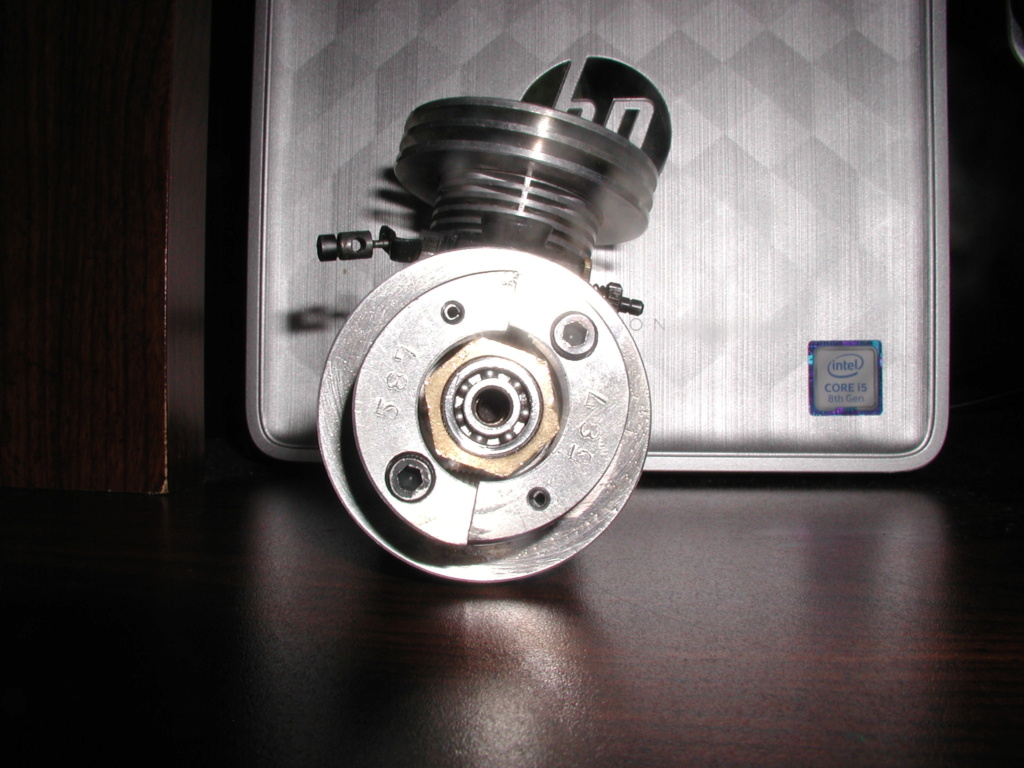 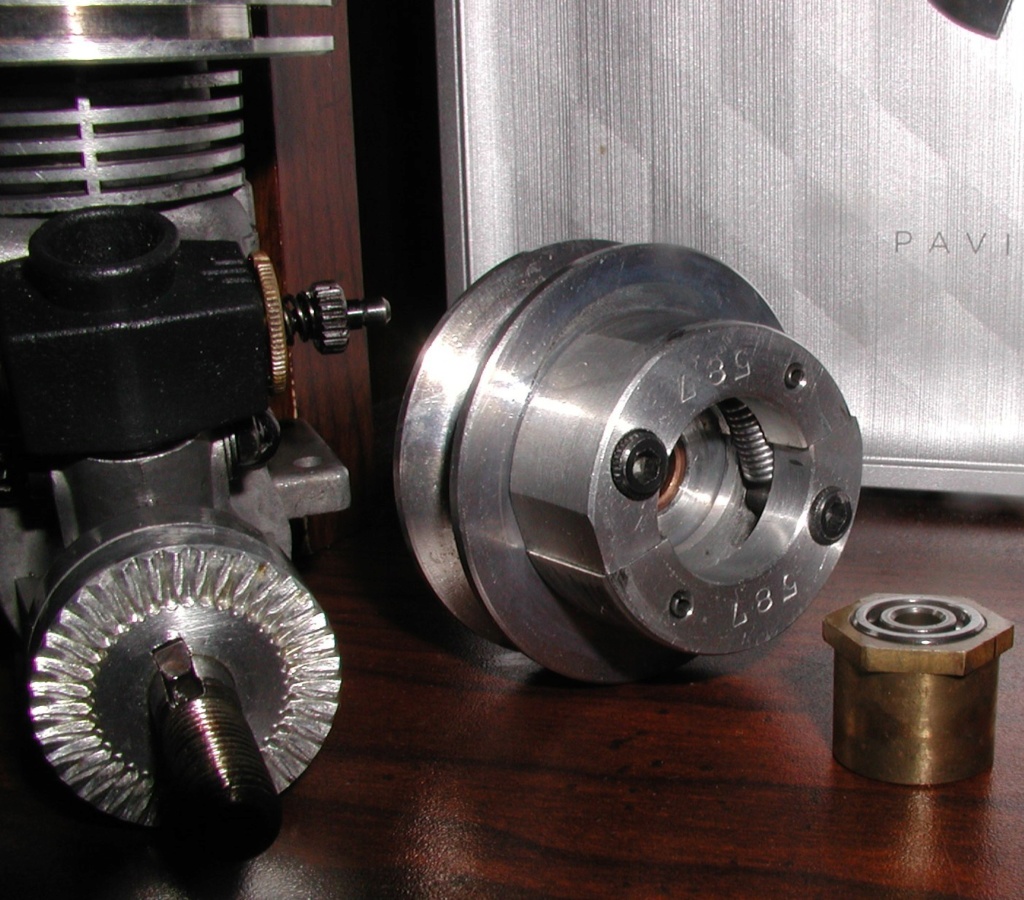 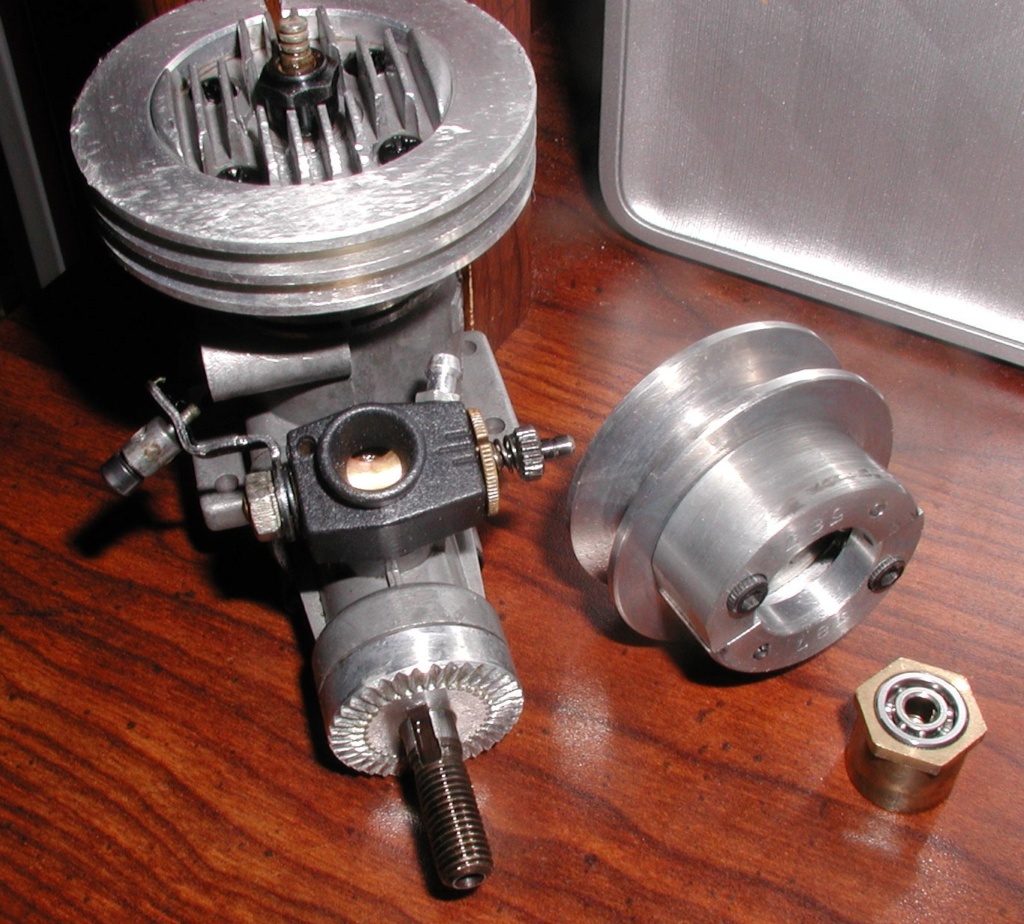 Yes, all car clutches look the same. The 1/8 scale ones are metal with a cork or cardboard lining in the clutch bell.

OVERLORD wrote:Yes, all car clutches look the same. The 1/8 scale ones are metal with a cork or cardboard lining in the clutch bell.

"All car clutches look the same" 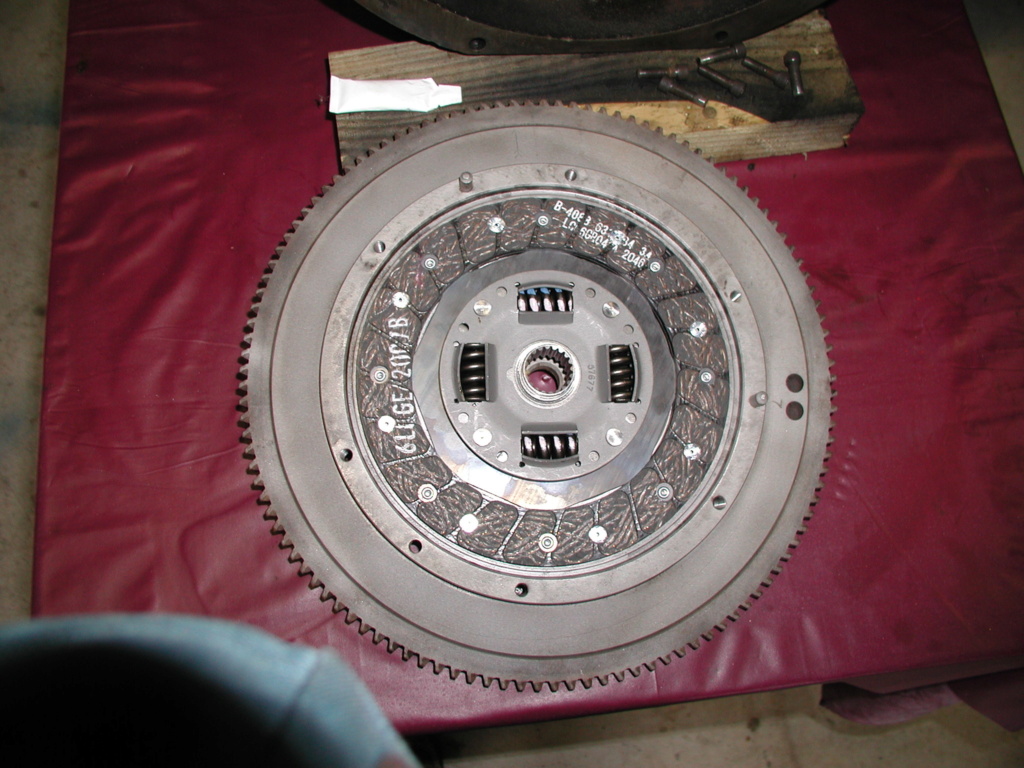 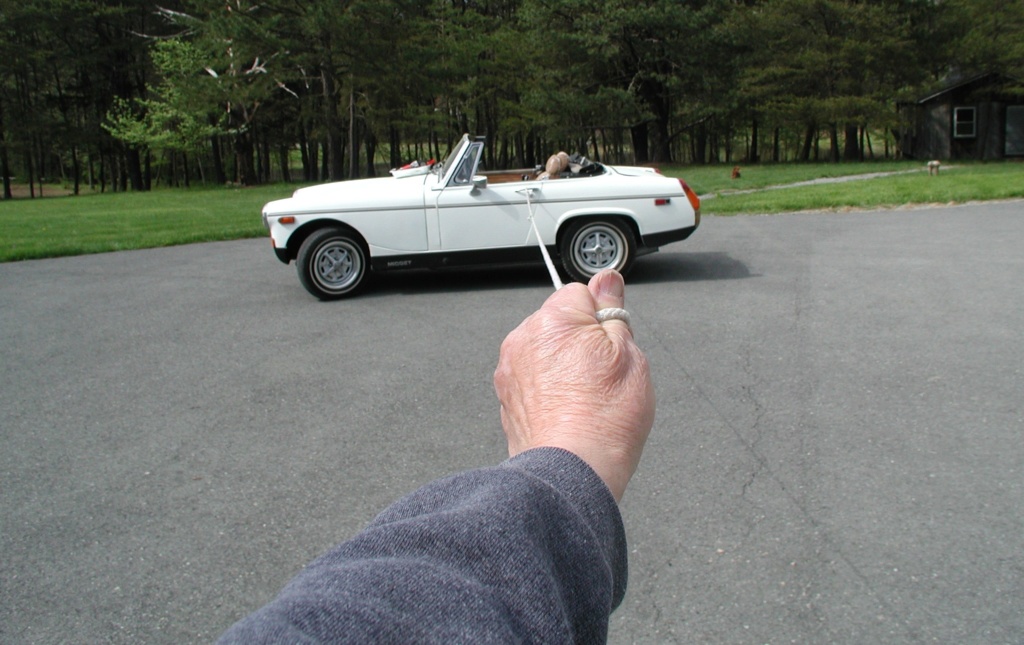 I glued the chassis pan applying first the Loctite activator (and not cleaner) and then using standard CA glue. 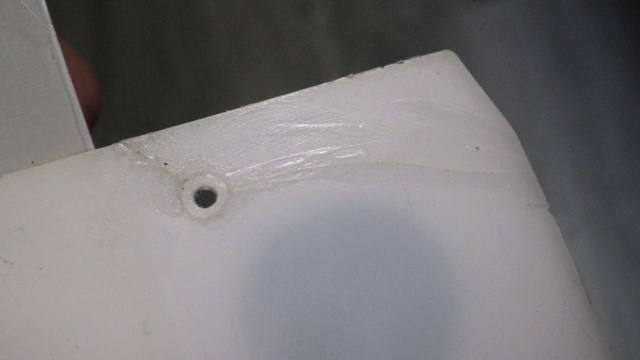