» wanted sure start engines
by happydad Today at 5:40 pm

Having built several Shoestrings, I have had nothing but vibration issues. I exclusively use the Fox .35 with these airframes. I have discovered that the Shoestring is prone to vibratory issues resulting in extreme vibrations that have broken glue joints and shook the lines all the way to the handle.This loses airspeed, rpm's and patience. I'm no stranger to the Fox .35 and I have dealt with pretty much every problem one could experience from using them. I have attempted to add weight to cranks, grind material from the piston. This plane which I recently built was essentially useless trying to run the Fox. The engine rpm's were so radical you could not hold the plane long enough to adjust the needle. I have done a shotgun blast through the entire engine pinpointing, adjusting, lapping and polishing you name it. My last attempt was placing 1/8" steel plates under the engine lugs and really cinching the engine down. That helped a bit but the engine runs were horrid and the flights were non flyable. It's very difficult to harm a Fox but after the dozens of burn down runs I gave it, I was pretty skeptical that I had done some damage to it. My buddy Dan Banjock however suggested that he wanted to try something a bit different on this. He made this spinner which internally has 3/32" ball bearings that run in a groove inside the spinner nut. I figured what the heck lets try it. Well today off to the field and I have to say it's a good thing that I didn't suggest eating my hat. This darn thing was amazing. It worked like a charm. Put it on and the engine needled well and flew well. Take it off and it was back to square one. We used some light silicone grease on the balls and flew this thing all day. This was indeed a very cool fix for something that wouldn't work. Dan saw something remotely like this in a ad from a 50's Air Trails magazine. He made it yesterday and I can't wait to do some more experimenting with this in terms of size, balls, weight etc.  You can't run uniflow on a plane that's foaming the fuel. My first tests were using the chicken hopper on standard vent which worked well. My last few flights were on uniflow which pretty much worked flawlessly with the exception of going lean immediately on launch. Necking down the pipe will fix that but I could also launch slightly richer. 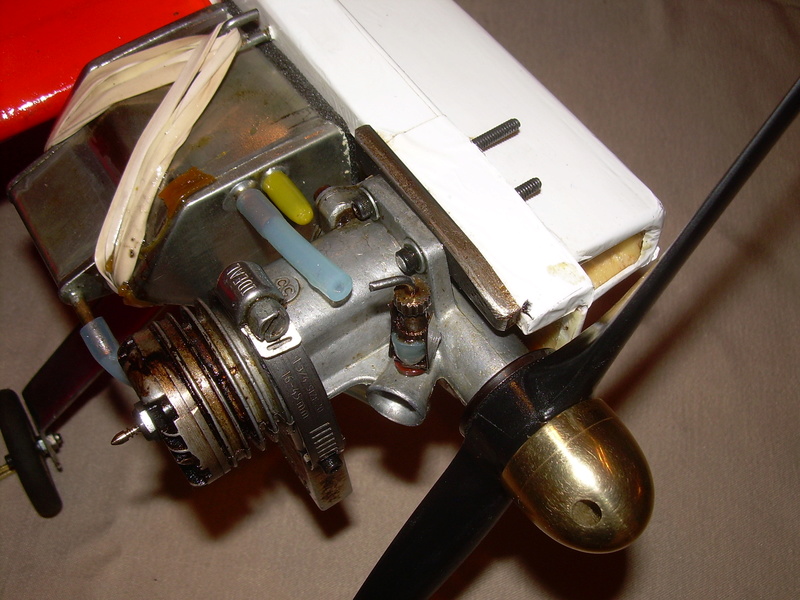 Here's a picture of the engine with the lugs padded underneath. 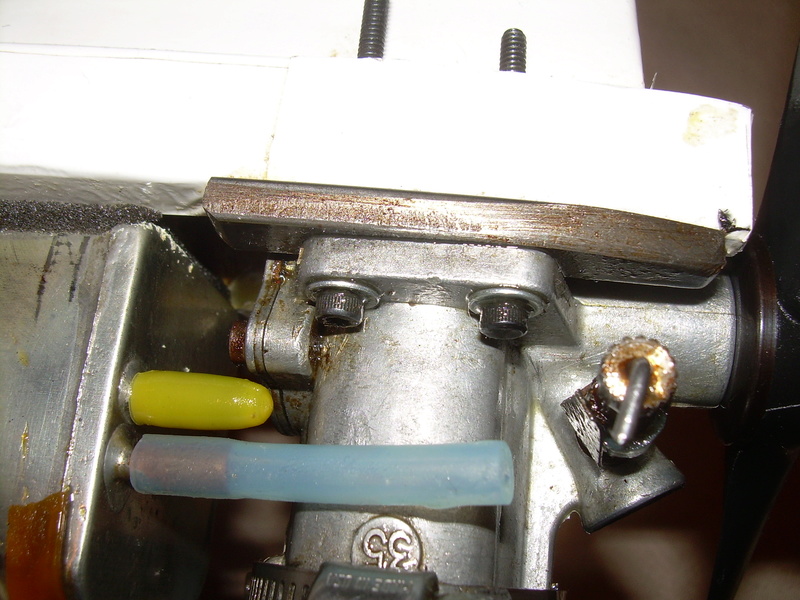 A common problem here on profiles is the vents become placed in turbulent air due to the cylinder head mounted profile. It's very imperative to get the vent into clean air. For now I just extended the vent using a piece of fuel tubing to fly it. It will be hard piped into my engine cowling next. 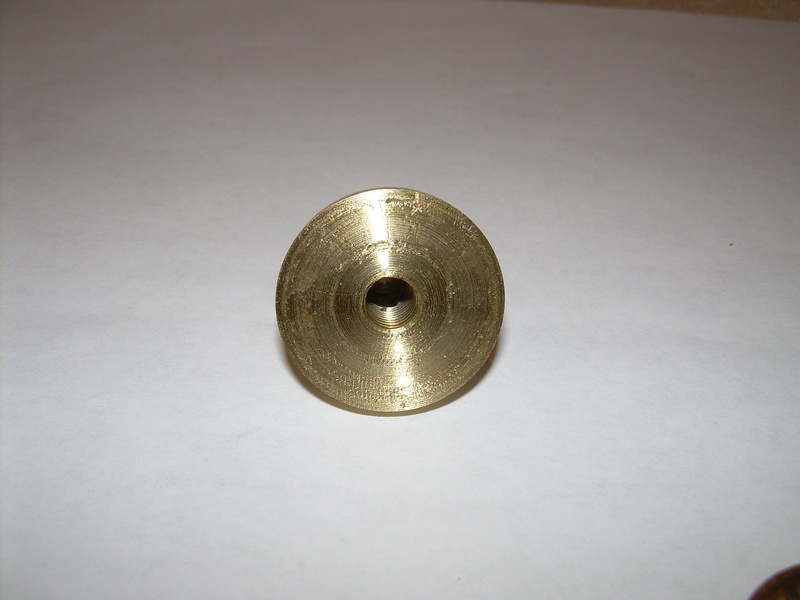 Back of spinner nut 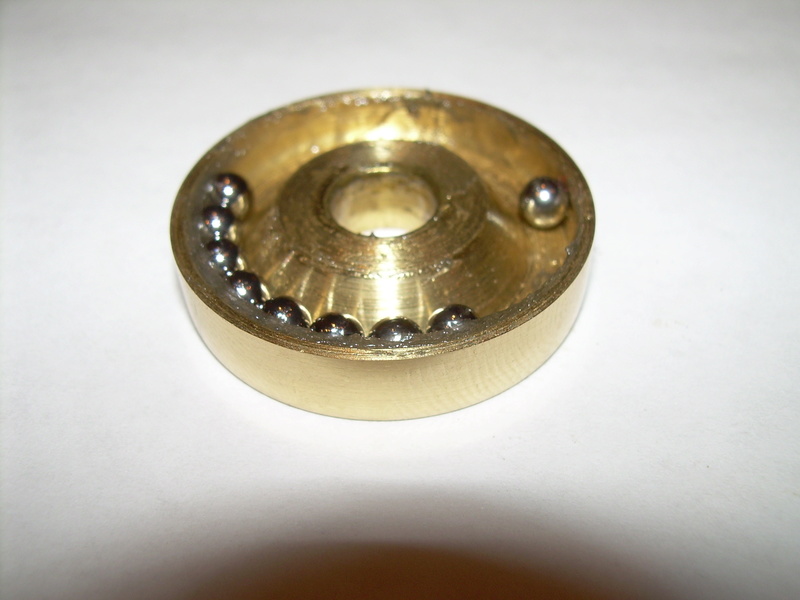 ball race side of spinner.

All I can say is it works and I couldn't be happier. Ken

That seems strange and I am not wrapping my brain around how it could work.

I am glad it does though. It sucks when simple engine vibration shuts down the day.
Phil

Same concept work for balancing tires. There are beads that can be placed in the tire that will self balance.

https://rideapart.com/articles/dyna-beads-miracle-balancing-tire-snake-oil
This seems concise, even if it qualifies as a "negative" review.  I think i have a grasp on what is happening.
Phil

I think the link has been cut, it might be this one? Miracle balancing

Sorry, copy/paste error.  Fixed now. Surfer_Kris got it right with his link.

Ken,
I successfully run Fox racers myself. Your solution as presented here is fabulous!
One thing I note that seems incorrect, is mounting your engine on steel pads. You must understand that Fox lugs cank downwards and are NOT straight & parallel like every other engine in the world.
Every other type racer is best served with a nice straight & square metal motor mount. Not the Fox 35!  Mounting a Fox on a straight square mount can bend the crankcase causing the engine to run (more) poorly.
I only mount my Foxes to maple bearers sheeted with plywood doublers. The plywood crushes UNEVENLY as required when the engine tightens down which does not unduly strain the crankcase.
IF I have a model with straight metal mounts I use 1/16" plywood crush pads underneath the engine lugs as strain relief. A Fox .35 mounted on a Brodak SuperFly gives an absolute SHAKER of a model due to it's (relatively) longer nose moment. Same engine mounted on a short nose moment model such as a Mongoose makes a day & night difference in noted vibration.
A performance engine guy would of course mill the Fox lugs flat on the bottom and be done with it. But sport race rules don't allow for nice modifications like that.

Is there any chance you have a drawing for that spinner? I'm also curious as to how the number of bearing balls was arrived at? I would be interested in trying out this marvellous idea! Keep up the good work!

I’ve installed ceramic beads in motorcycle tires. Same concept. In my case I just dumped 1oz of beads in there not knowing what the actual balancing weight was. It worked because the majority of beads will gravitate to the side that needs the weight and the rest will just spread evenly throughout the tube. So the number of bearings isn’t overly critical.

Hi Paul, this is my Foxberg plane. I use it for stunt in the off season months.  Due to the demise of Fox, our club has become less lenient on the rules. I'm very aware of the shortcomings of the Fox. It's readily apparent that Java man built the Fox .35 using stone tools. Duke just refined it using a hatchet. The lugs have been milled on this engine. I've also replaced the bushing in the case, this is a older Fox .35 which has brass end pads on the wrist pin which have Delrin installed now. Being realistic, there's nothing I've done here that offers a run that's going to offer me a substantial benefit. Of course those with their panties in a knot would contest it. Nonetheless it's not the engine I use for racing Foxberg at Brodak's. I have a box stock setup for that purpose. It also shook like crazy on this airframe.  Of the 6 guys I raced in New Jersey in October, I took 2nd using the engine in the picture.  My son is more responsible for the fact that when it comes to getting the plane to me, he does it well. In this picture I have a strap muffler which is something the older wide bypass Fox's totally dislike. Our stunt field requires a muffler so I had to use it for testing yesterday. The only way I could stop the vibes was to go with a larger prop. This just got the rpm's out of the resonating stage but it was totally opposite of what I was trying to achieve. I wanted to go fast and 10" props are not going to offer that.

I don't have a drawing as Dan just cranked this out for me Sat evening. He started with 10 balls, we removed one and used 9 for yesterday's tests. Dan has made 3 of these and has used them all with the Fox .35. His best design is being used on the Galloping Comedian which he's now won old time twice at the Nats with.