» Pee Wee Backplate Conversions - Anyone Experimenting Yet?
by Jim Howell Today at 12:00 pm

Amazing! Just got the Clovis, New Mexico new 2019 phone book, look at what is on the front cover! 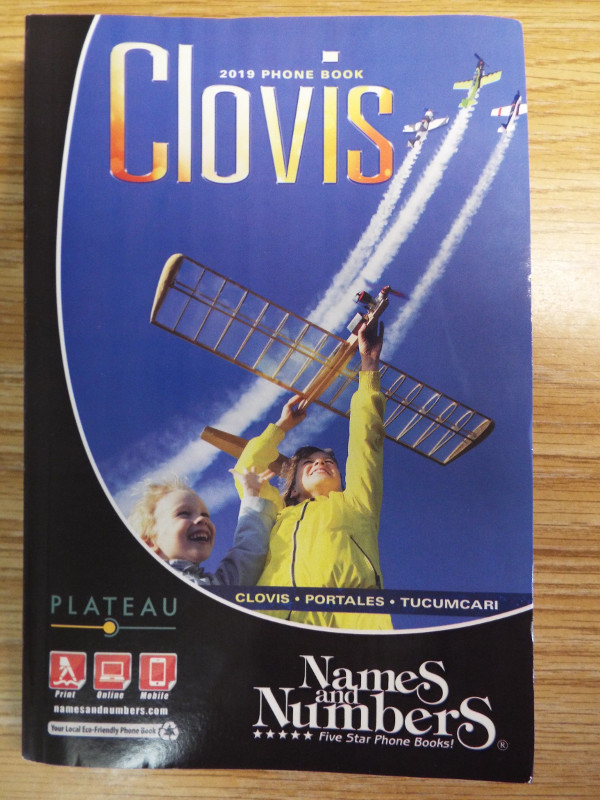 Thanks, Kari. Does anyone know what CL plane is being held up by someone's grandkids? I can make out what appears to be a Testor McCoy Red Head engine, probably a .35 one.

Sure looks like a Tommy bar of a diesel on there

Sure hope it wasn't really running

No way. The kids are smiling. Dead give-away. In reality they'd be grimacing at the noise, smell and spray of spent oil.

Since I got the book in front of me, took a closer look. This is one of those half size phone books about an inch (25mm) thick. Sure have changed over the years, before had more content.

The toddler is recognizable for his age. Looking closer, it appears to be may be his mom holding up the plane. It must be a Photoshop composite of course, because of the airplanes in the background. Aircraft smoke doesn't appear to be real, when one gets closer to the planes, looks touched up. Blurred prop may be also fake.

Yup, its a diesel engine for sure, Oldenginerod mentions a Russian MK17. Certainly adds more mystery to the photo. Nobody around here I know of uses diesels.

Steven Yampolsky on Stuka Stunt forums clarified, it is a stock photo that was also used by AMA a couple years ago. It is a Russian trainer kit with plywood ribs and a MK-12B engine. He mentioned building one at one time.

Anyway, I thought it neat that a rural telephone company would feature a control line airplane on its front cover.

GallopingGhostler wrote:
Yup, its a diesel engine for sure, Oldenginerod mentions a Russian MK17. Certainly adds more mystery to the photo. Nobody around here I know of uses diesels.

Yep, closer inspection shows an obvious front crank bearing housing, not evident in the Mk17 which has a parallel crankcase nose with a very small bearing.
Still, similar designs and colours.  Remember, I'm looking from thousands of miles away so you can forgive my mistake.

Oldenginerod wrote:Remember, I'm looking from thousands of miles away so you can forgive my mistake.

Australia isn't much different than here, I gather. You have a very large continent island and a large rural population as well, farmers, dairymen, range cattle, etc. I imagine interests are very similar, too.

Well That's just Cool either way you look at it , this day and time and not a model mag.