Just bid and won on this, was the only bidder, $15 + $8 shipping = $23 total. People are going for the control line version for some reason now. 5 years ago, one could pick up a Red Head for almost next to nothing in good condition. I can use this RC (we don't require mufflers at our flying field) or mount to a CL aircraft with throttle wired open, use like a Red Head. 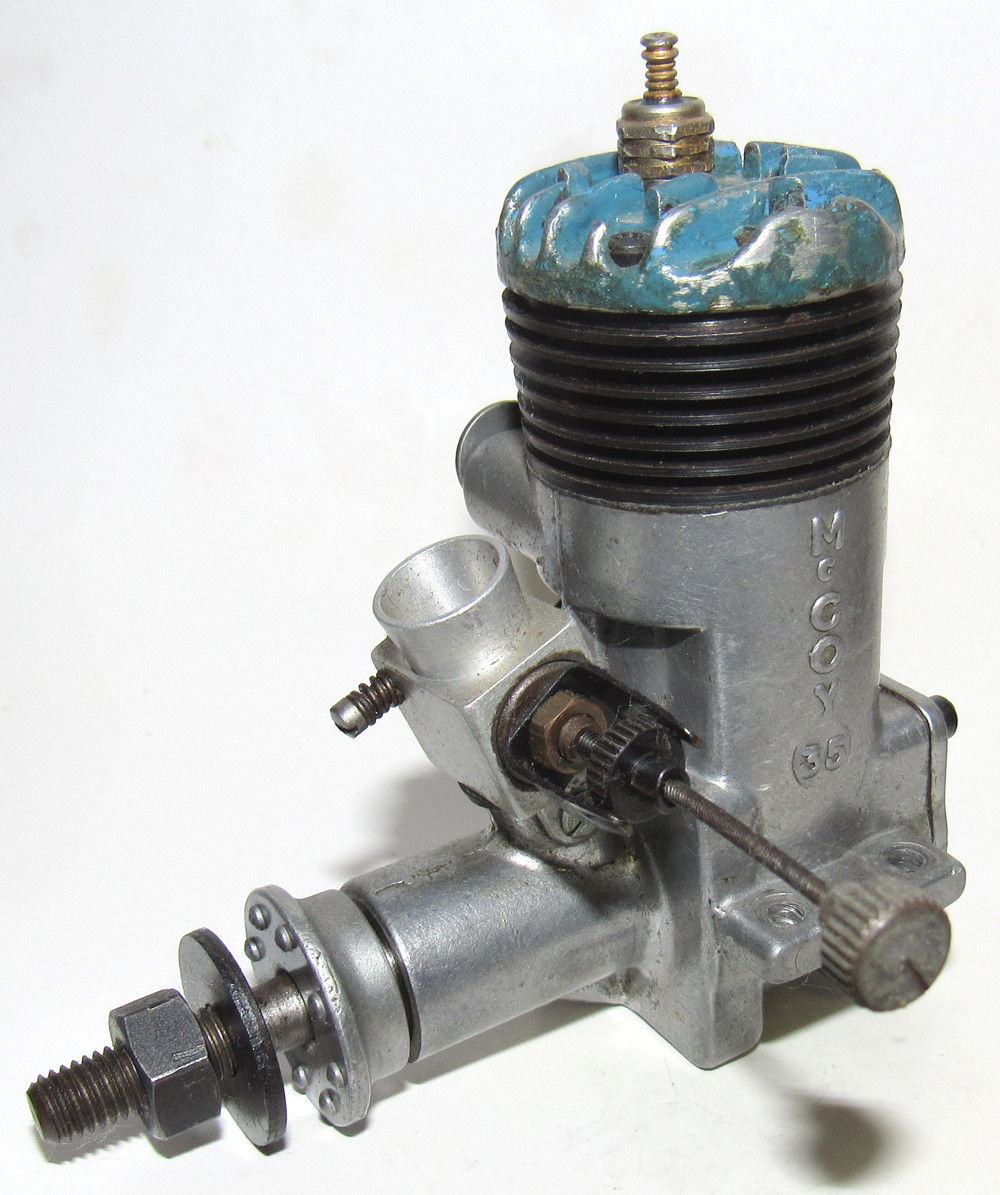 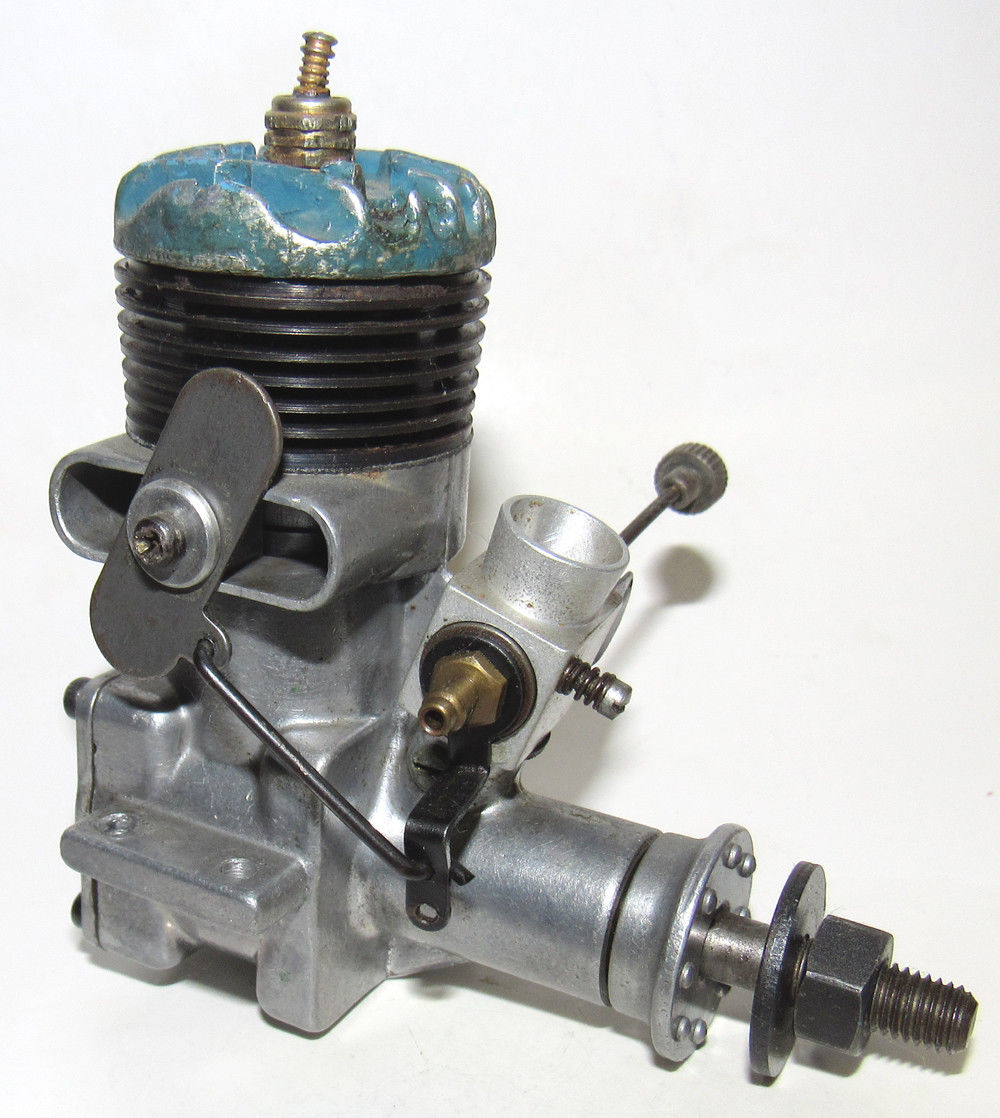 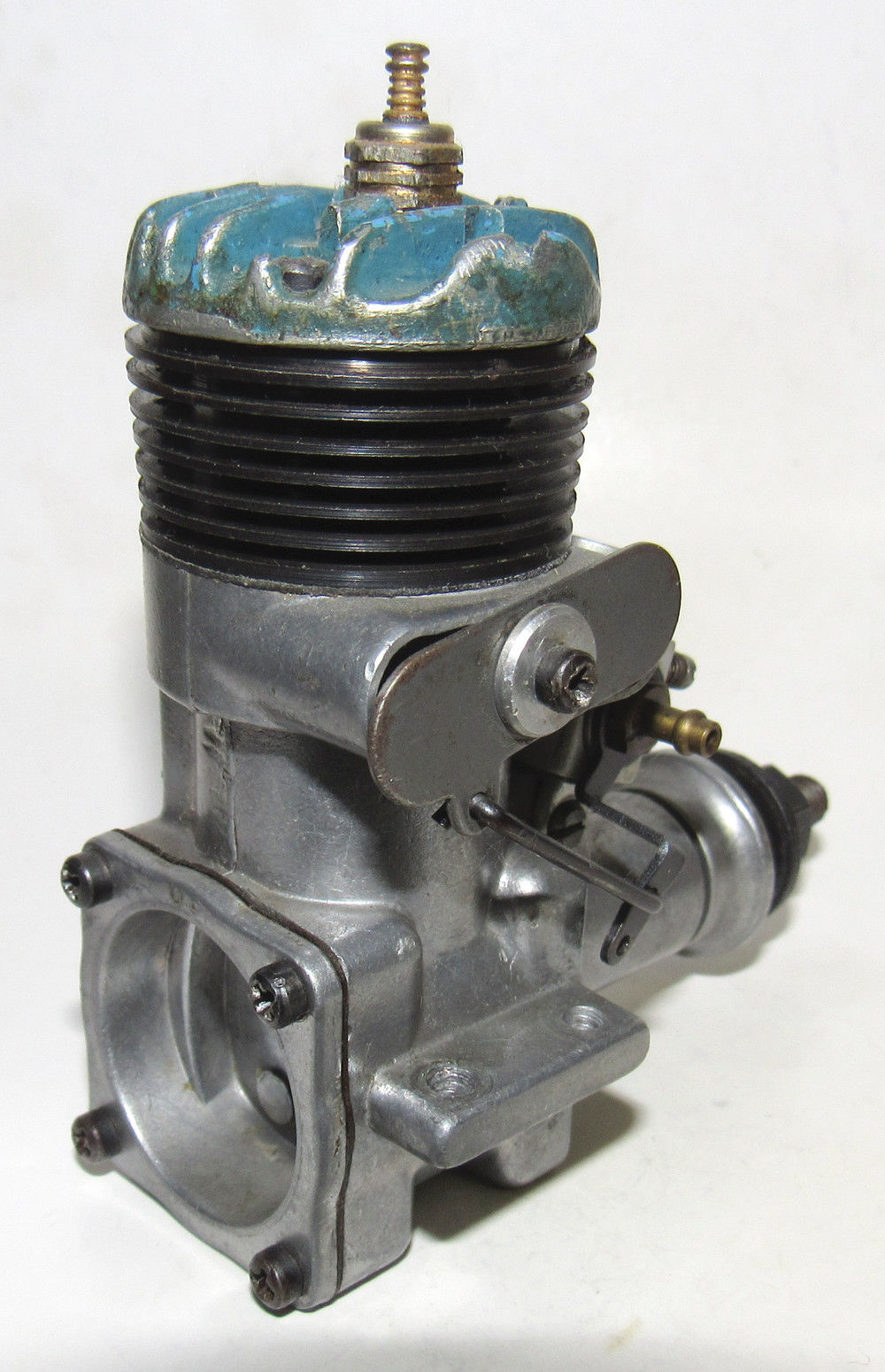 This will be my first Blue Head. From photos appears to be lightly used, may be mounted at one time, will know more when it hits my doorstep.

Hmm, I don't have any blue heads George. Got a green (Torpedo) and a bunch of reds but no blue.

I bought a lot of gaskets (cheddie?) from her on ebay and some through PM's here, but she's not posting any more. If you need help in that area let me know.

Bob, thank you for the offer. Yes, I've dealt with Shelley Ramos and bought McCoy gasket overhaul kits from her before. Why she doesn't post here lately, don't know. Asked her a month ago on E-Bay whether she had gaskets for K&B Stallion, she said, "no". She still sells kits for McCoy's.

As far as I know, the Blue Head was Testor's RC version. Basically it is a Red Head with modified venturi area to mount a carburettor. Some came with chrome plated pistons for better longevity. I guess that with running with a throttle made the engine run hotter. At least from photos, this one is reasonably clean, chipped head paint doesn't appear burnt, may be storage drawer wear like the new never run .19 RH I got for a song a couple years ago. This will be my first Blue Head, so I will learn more once I get to examine it.

Engine came in today, has a stamped note on it from Post Office, "Received in damaged condition." Contents are not damaged inside. There was some oil spilled on the label, but none was seepage from inside contents. Box is not dented. Engine was wrapped well, no damage. Shipped USPS Parcel Select, it took 13 days to get here from nearby Colorado.

I hate to sound a little foolish, but reminds of warnings we received when I worked, if we see a package with oil stains on it and a few other things it could be a bomb.

It got hung up in Dallas for almost a week.

Okay, enough nonsense. Engine is NOS. Head appears to be repainted, not the original head, is crusty on top. Don't know what happened there. This engine appears to be a Red Head R/C with a blue head. Later, I'll remove the head and get a closer look. I have extra .35 heads, so this is no biggie. It shows signs of being mounted but never run, outside and what I can see inside the exhaust port is clean as a whistle. Back plate screws don't show any screwdriver tip wear. RC carb and spray bar show no signs of Castor residues. Prop nut is fully black like new, black prop washer shows no signs of prop mounting and tightening. Without a prop on, just turning the crank, appears to have like new compression.

A slow boat from Colorado comes to mind George. Tracking numbers can be a blessing or a curse. At least you know where it is, or went.

Were it me, I would sandblast that head and get some high heat blue and keep it the same unique color.

Glad it made it to you and things turned out Ok.

Sounds like a nice Score even if its not a Blue head ? The prices have gone up in the last year , i got a like new Redhead 23 ? at a swap meet a few years ago for 25- and he wouldn't even throw in the prop

Thanks, Bob and Eric. Reason why I think it is a Red Head, is that the Blue Heads I've seen are the Lightning Bolt versions. Here are some recent photos of an NOS Red Head R/C on E-Bay. 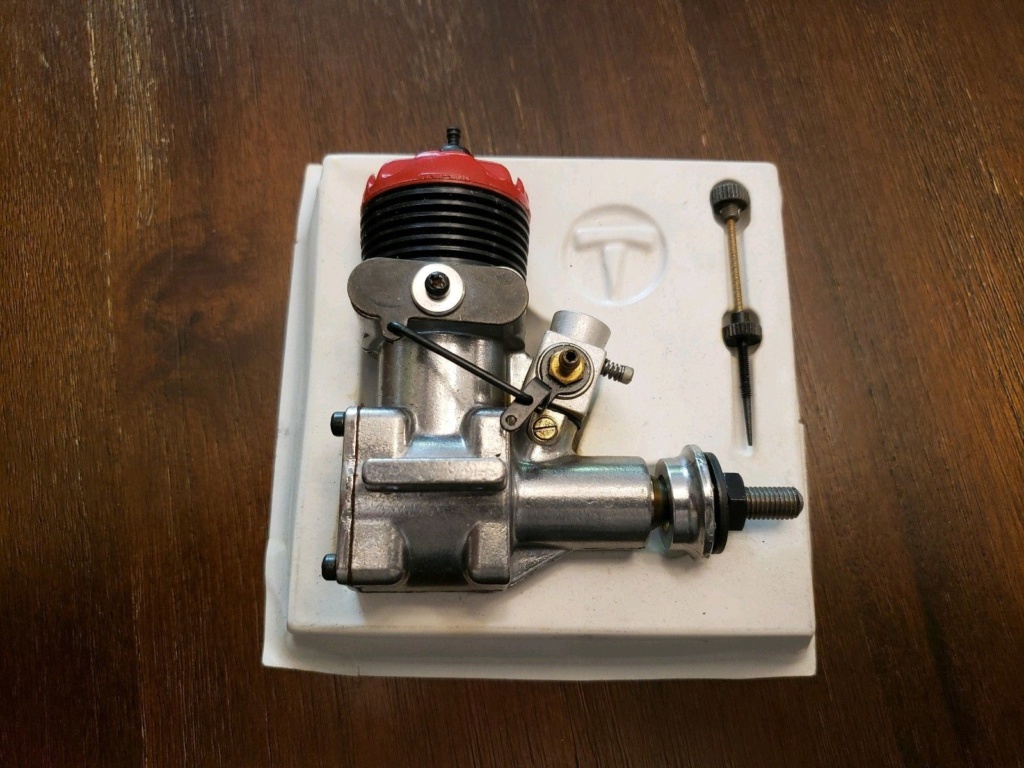 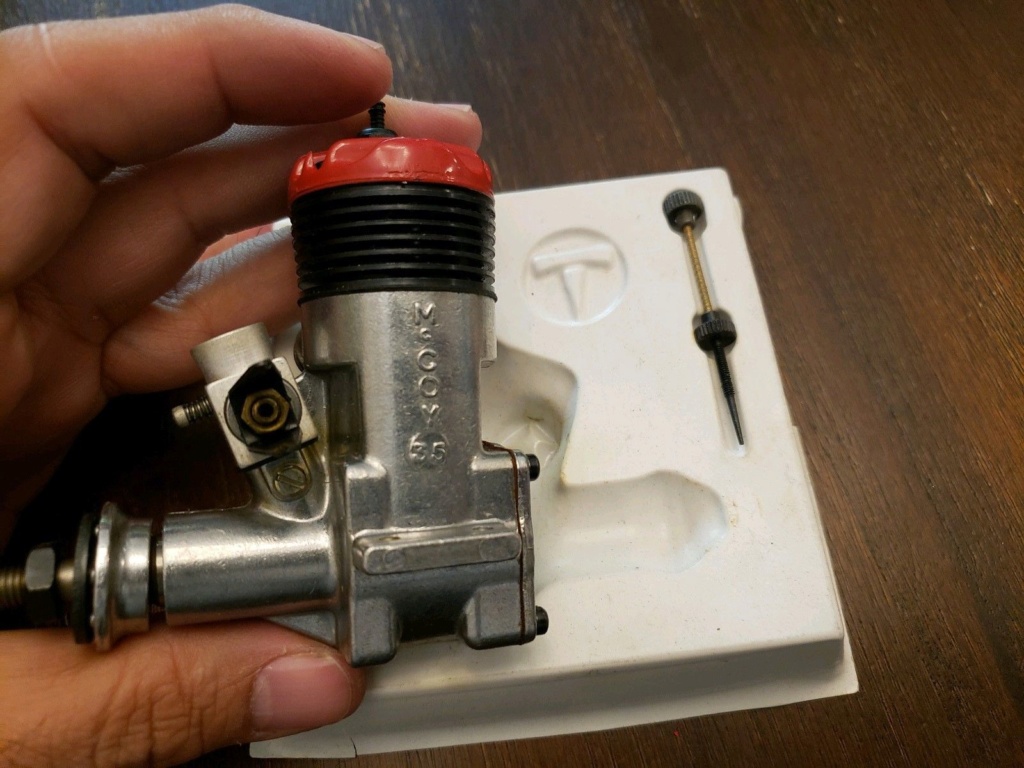 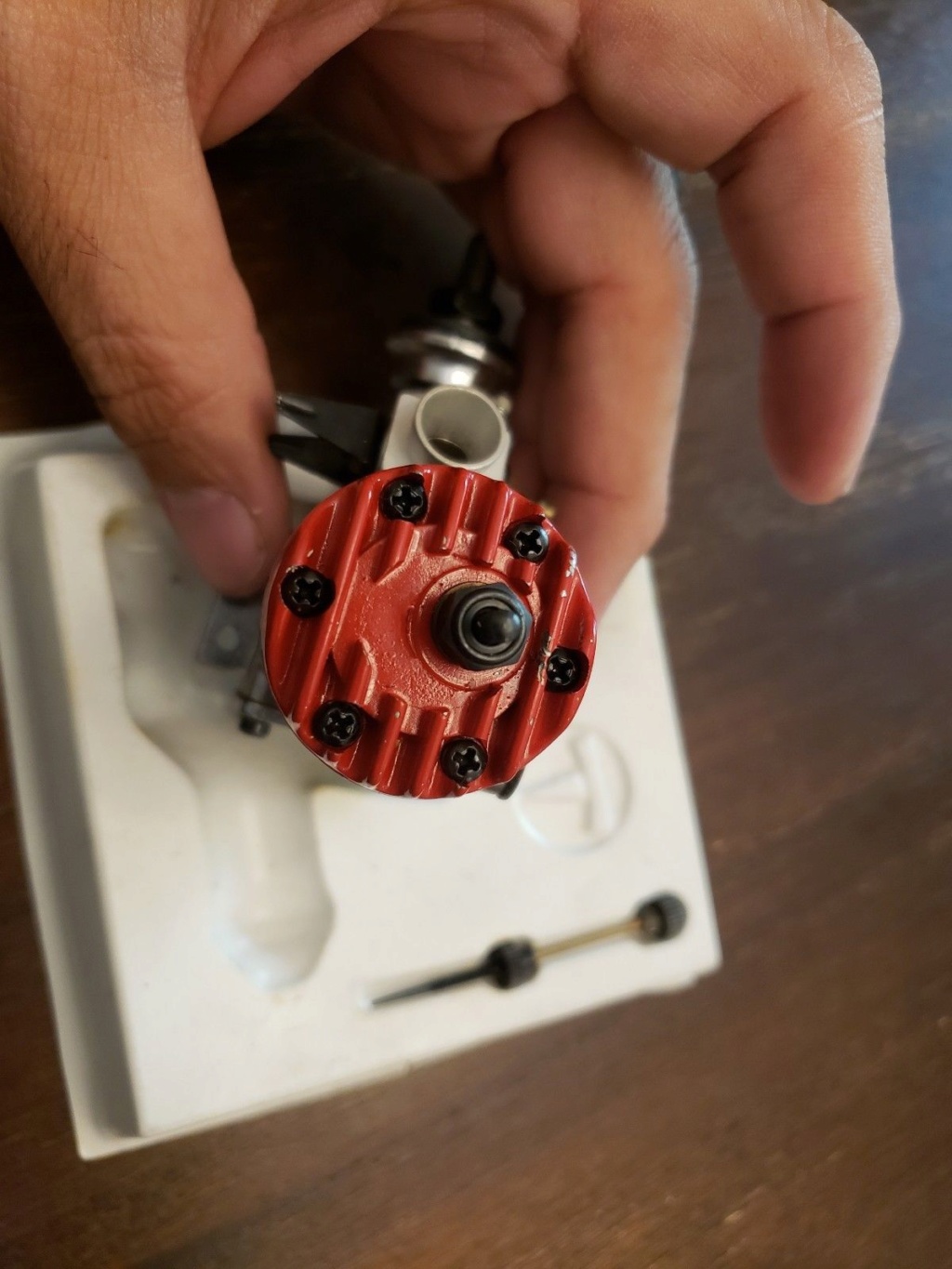 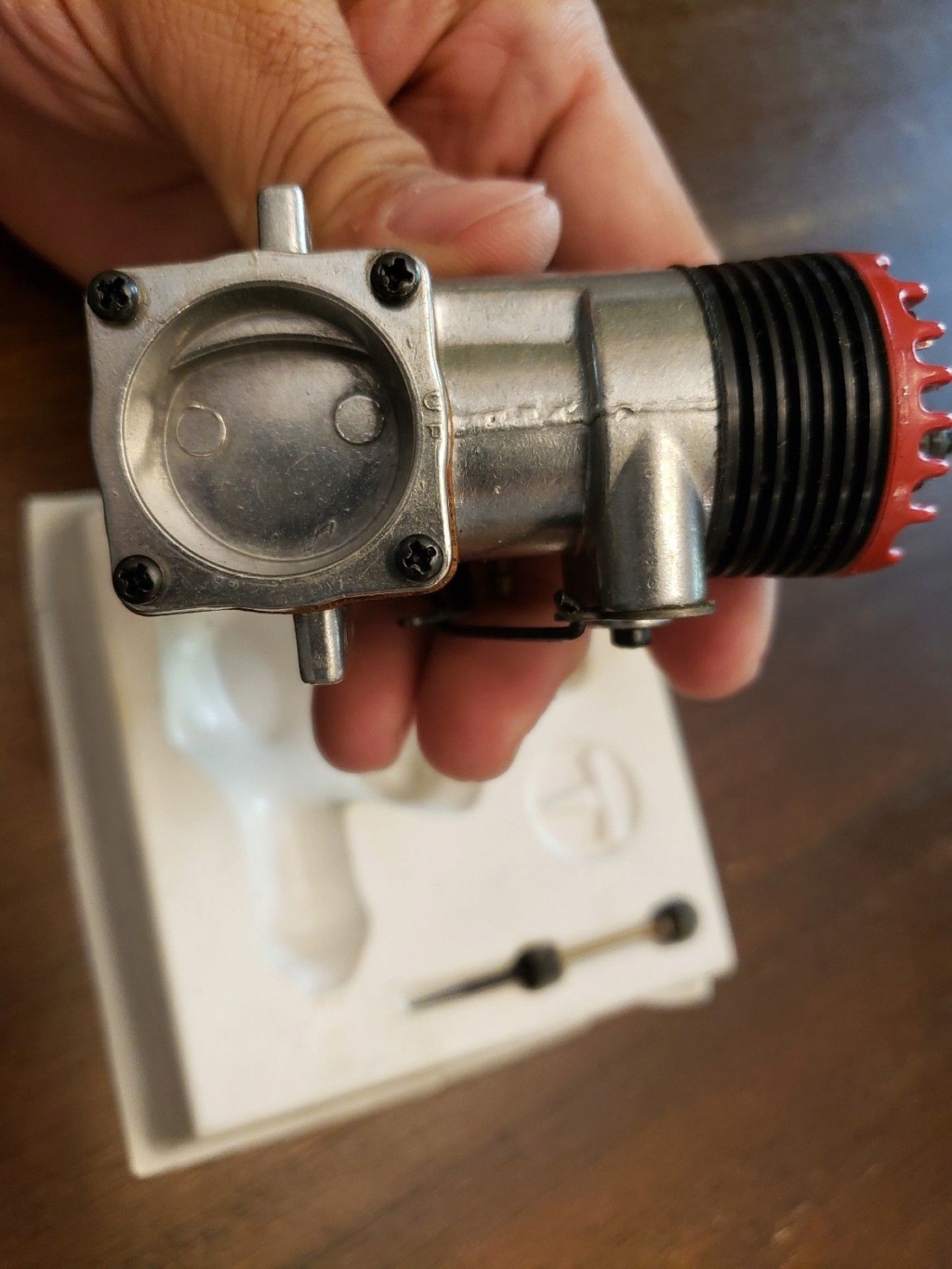 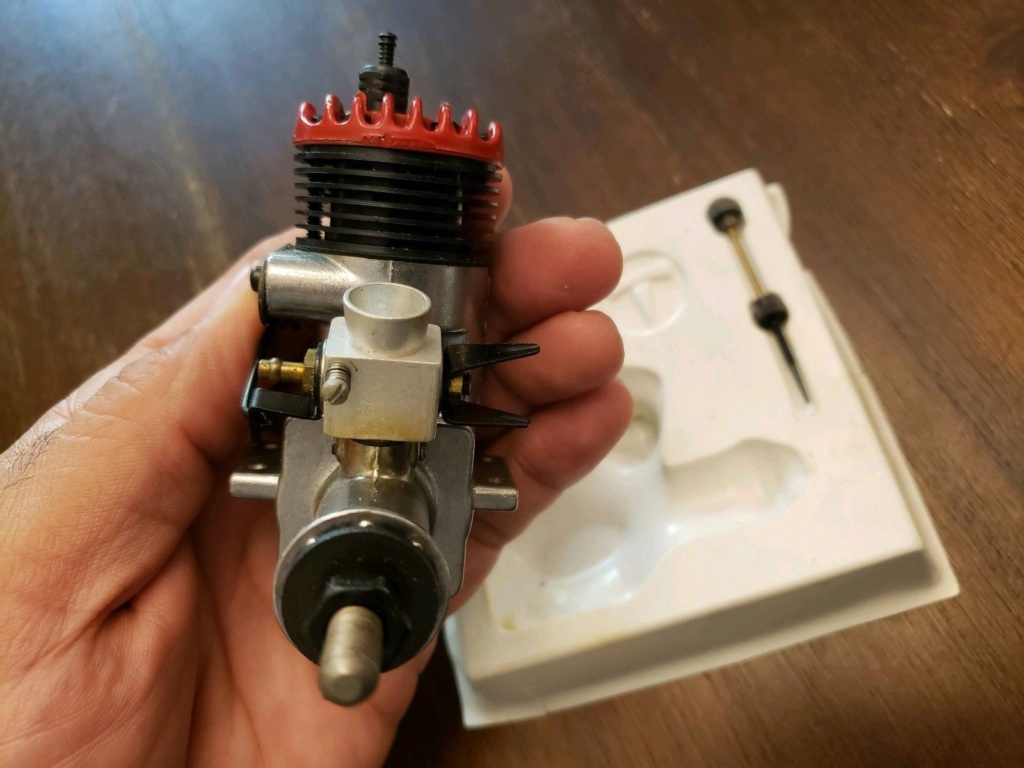 Other than the Blue Head, which interestingly has the same blue paint on the underside of one engine bearing lug, it matches this red head totally (earlier non-lightning bolt crankcase). It appears that the blue paint under the lug was pulled off the engine bearer when engine was removed.

That might explain why he painted the head. He wanted it to match.

From R/C Groups, posted by "Twin Stack" AKA Bob Allan of Enya fame.

kiwi285, according to the"bible" for collectors of US made engines ( the "American Model Engine Encyclopedia") your McCoy is a 1961 model 35 Stunt. It should have a Red Head however, as the Blue Head's were only fitted to the later 1965 McCoy 35 R/C engine. This latter R/C engine had 2 visible differences to your earlier 35 Stunt, ie. the venturi was shortened considerably for fitting of the throttle, and it was also fitted with a swivelling exhaust baffle which necessitated a thicker (and flush) web in the exhaust stack for the mounting bolt. The A.M.E.E. says that only the R/C engines in the 19, 29 and 35 sizes were fitted with blue heads, so my guess is that either the blue head was retro-fitted by someone else or its one of the last engines out the factory door, when they were using up all the leftover parts. The last of these model McCoys (before the square-case Testors Series 21's) was the 1966 "Lightning Bolt" engines with that logo on the bypass.

Some of my McCoy's, sadly missing a blue head. 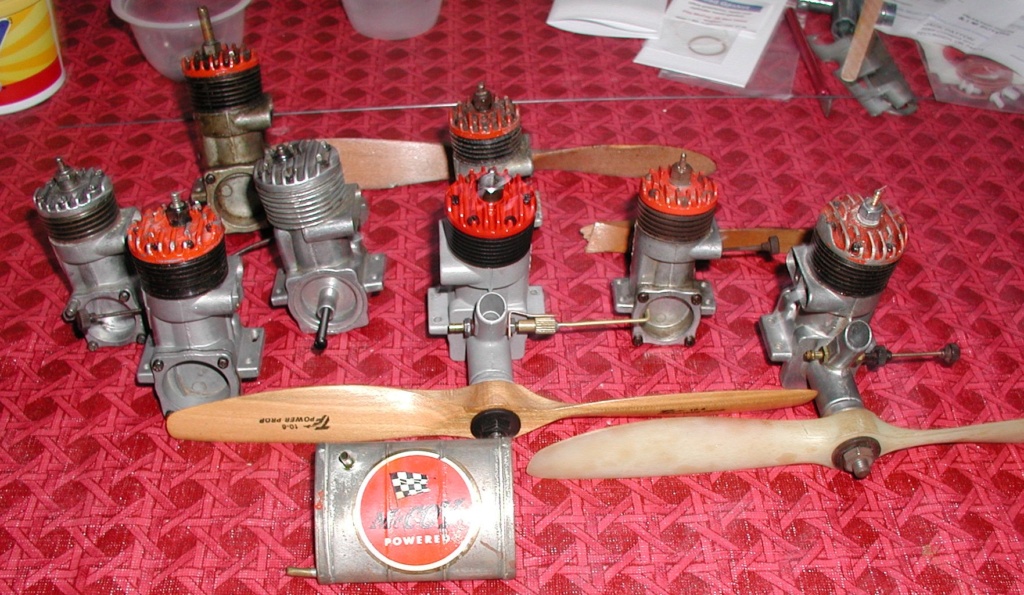 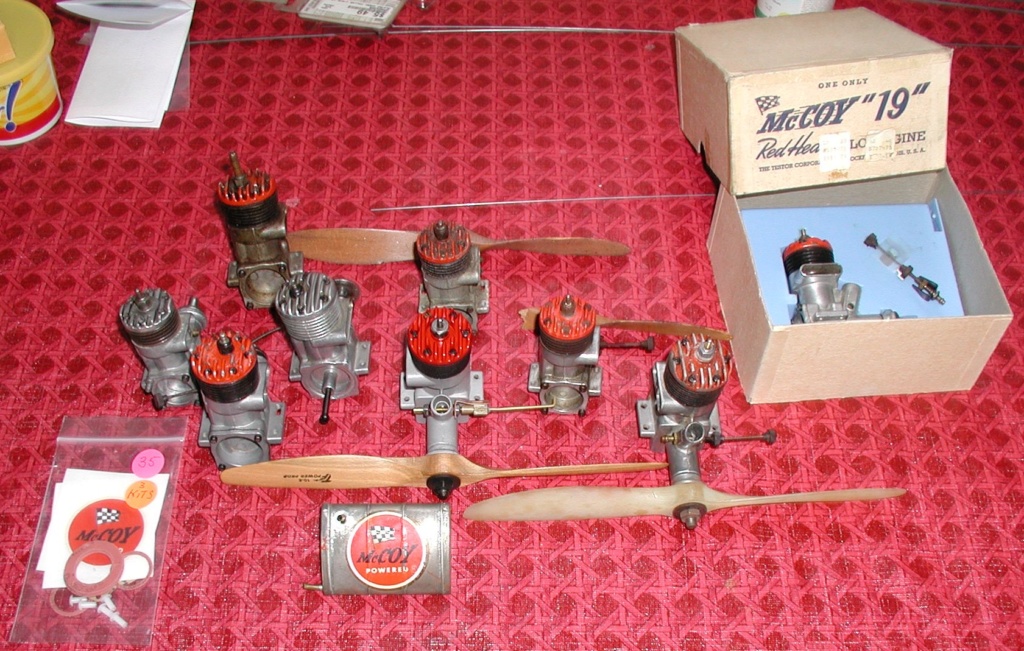 Interesting info, Bob, makes me wonder if there were some Red Head R/C's followed by Blue Heads prior to the Lightning Bolts. There is an article on Sceptre Flight, sceptreflight.com Model Engine Tests, McCoy 35 RC. Model magazine is not shown in the article, but must be of British origin, probably Model Aircraft or Aeromodeller.

H.R. Warring, August 1964 wrote:The pressure die cast, red-enamelled cylinder head is held down by six Phillips head screws, three of which are full length and extend down into the crankcase unit.

It was a mild sport engine powerwise, the Enya's and OS same displacement were more powerful, better throttling and available with factory mufflers. This may explain why the engine was short lived, even with upgrades to the Lightning Bolt. For CL work, the Red Head is best operated unmuffled.

Me too George, I had left over paint from my MG engine rebuild. 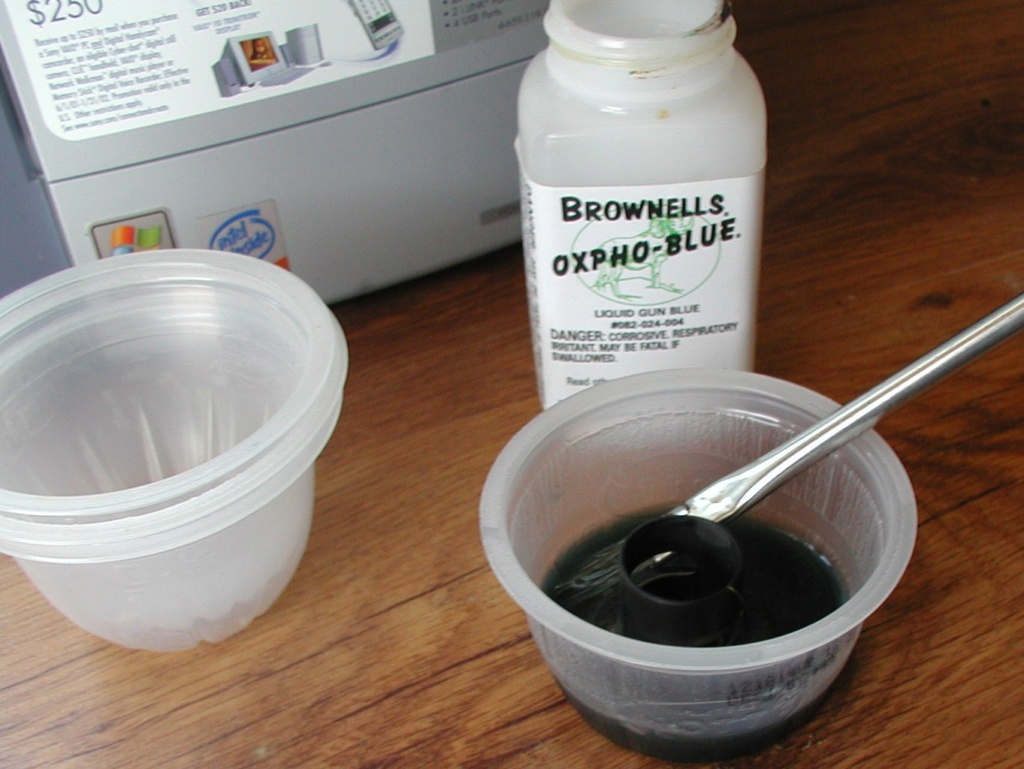 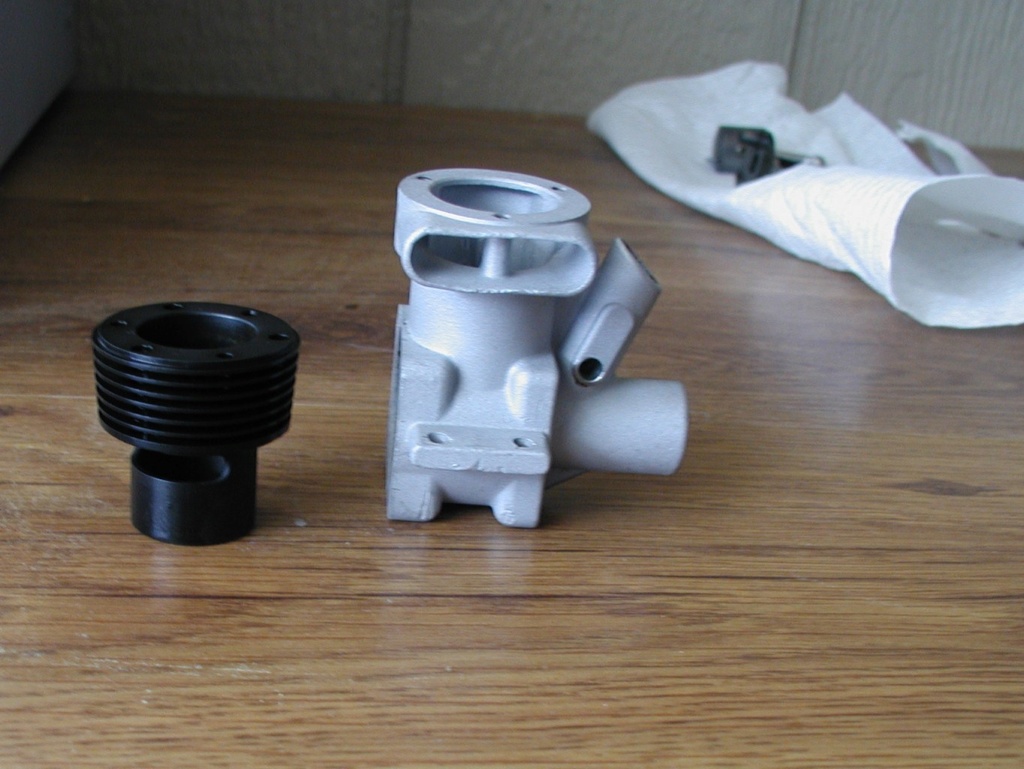 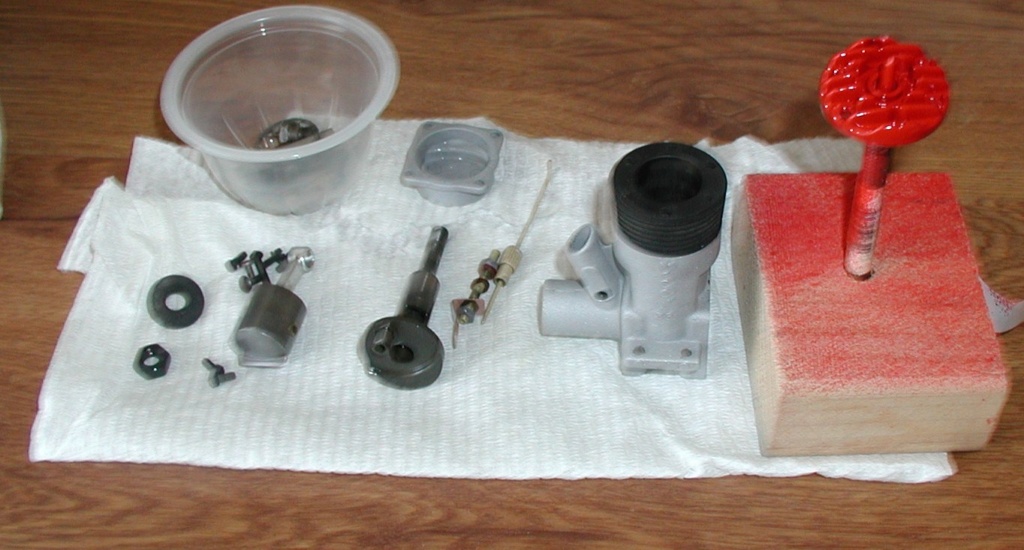 Bob, that Brownell's Bluing did a really nice job on the cylinder, red seems to be on spot for this engine, nice restoration.

Non-linearity of the McCoy's RC carb mentioned by H.R. Warring caught my eye. I'll know more when I bench run it.

Other RC carbs have the spray bar terminate halfway into the carb barrel throat. This one still uses the CL spray bar with single hole through the carb assembly. It is stationary with the barrel, rotating with it. Only speculating, but that may be a reason for it's lacking the smoother throttling of the other .35 engines.

If I use this engine, most likely will put it on a .35 CL with throttle wired wide open and remove the exhaust restrictor plate and linkage. Although lightweight without muffler, I don't know if I'd want to try it on an RC. CL flies close to the ground and so sound doesn't carry as far. RC flying a couple hundred feet up projects noise further. Then too, someone may sell a custom venturi for it, which will convert it to CL nicely.