Matt,
Put me down on the list for a quart of your diesel blend.
Thanks, Steve....

@gkamysz wrote:Davis never shared any details publicly about what he was doing. Though, I think he was vocal about the 1/1/1 mix having far too much oil especially for larger engines. He did figure out that ball bearing ABC diesels didn't need much oil at all and may have been using synthetic? F2C racers knew this a long time ago.

Those store bought fuel cans are good, but I use MSR camp fuel bottles. I've used some thicker plastic drink bottles for glow fuel, but the caps are hit or miss, some plastics fail.

Essentially correct-the good old 1/1/1 mix does contain more oil than most engines would require-even tightly set up ones....but its saving grace is too much oil never did any harm in a diesel-whereas too little....!!! And a 1/1/1 mix is easy to blend -even for those with limited equipment....but it is far from an OPTIMUM mix, proportion-wise. That being said-unless you're flying serious competition-or very fussy about exhaust residue on your model...this mix will suit most users. ABC engines-assuming they've been properly made-both from a tolerance viewpoint and a material specification viewpoint-will tolerate a lean run much better than a ferrous setup-and without much-if any permanent damage (there are of course limits as to how far you can take this...!)-so can get away with a lower oil content....likewise, the top of the line TR diesels are using some very exotic materials, and machined to extraordinary tolerances-so can get by with as little as 7% oil....BUT the people using them know what they're doing-and just like dragsters-the engines are being pushed to their mechanical structural limits under the circumstances of racing....so a slightly off setting-or having to be held back because the other flyers are obstructing a passing manoeuvre-can result in overheating and a sharp loss of power. This is what happens when you push the boundaries under the pressure of competition. Most of us do not need to run diesels 'on the ragged edge'-so in the interests of longevity, use fuels with a reasonable oil content....in my case I use 3 blends-one GP for running in and sport use, one racing mix for PB engines, and one racing mix for BB engines-with the oil content reducing from 28% thru 25% to 20% respectively...the ether content roughly the same, and the kero content going up as the oil content reduces. The DII ranges from 2% thru 2.25% and 2.5%

Bob Davis' fuel was designed for general run of the mill R/C ABC engines on the one hand....and dieselised Coxes on the other-the requirements of each were quite different, so two fuel blends....

Fuel should be available today or tomorrow along with some 15% and 30% nitro.

@EXModelEngines wrote:Fuel should be available today or tomorrow along with some 15% and 30% nitro.

I see the quarts, but show “out of stock”. Did I miss the availability window??
Or am I too early for the update? 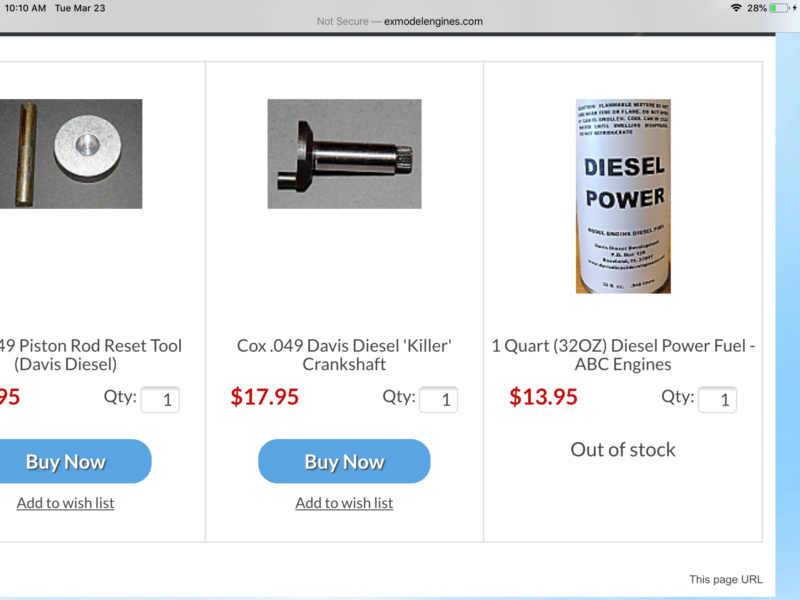 @EXModelEngines wrote:Fuel should be available today or tomorrow along with some 15% and 30% nitro.

I see the quarts, but show “out of stock”. Did I miss the availability window??
Or am I too early for the update?

No - you did not miss it. I've got to finish updating the rate tables for shipping and update the exact quantity before making them available for sale. On the diesel fuel there is plenty of stock available (96 quarts).

Fuel is now available for purchase. Please note this will ship on or by Monday 3/29/2021.