"Flash Back Wednesday" Trying to Take Photos/Video from Model Airplanes

"Flash Back Wednesday" Trying to Take Photos/Video from Model Airplanes

Visited with my flying bud Al yesterday, and we were talking about our different takes on flying model airplanes.

One of mine, from the very beginning, has been imagining what I'd see as a pilot from the cockpits of my models.  Of course, there have been plenty of times when I was grateful that I was NOT onboard when some of them lost their fight with gravity.

This obsession lead to my actually smacking a favorite model back in the 1980's, trying to make it fly with a Super 8 movie camera strapped to its back (confirm your CG, dudes!).

In spite of this, I couldn't leave the idea alone so, in the 1990's, I settled on still photography, using the much lighter Wal Mart "disposable" cameras to fill my need for aerial surveillance.

I lived by the creed (and still do):  "It doesn't matter what the camera mounting system looks like if you can't see it in the photo."...and bought myself a couple rolls of strapping tape.

The camera was stuck to my recently rebuilt Mud Dabber (converted from a "nose-dragger" to a "tail-dragger") with a generous amount of the super-strong tape, and with an extra servo also taped to the camera.

Positioned so its arm would depress the camera's shutter button on command, the servo was plugged into a spare channel on the plane's receiver.  You got one photo per flight:  "takeoff...snap photo...land...wind the camera to a new frame...repeat".

I quickly discovered that the engine's vibration could blur the photo, pretty much at any throttle settling, so I channeled my inner Bob Hoover, climbing Mud Dabber to altitude, killing the engine, and taking my photo at some point during the glide.

This hideous set-up actually yielded some fairly good photos (fantastic at the time) before the digital age brought the great, high-def stuff we've got now.  Still, I went through a lot of the "cardboard cameras" on several planes before finally going to the new, easy to use, digital cameras we take for granted now.

We are SO spoiled!!! 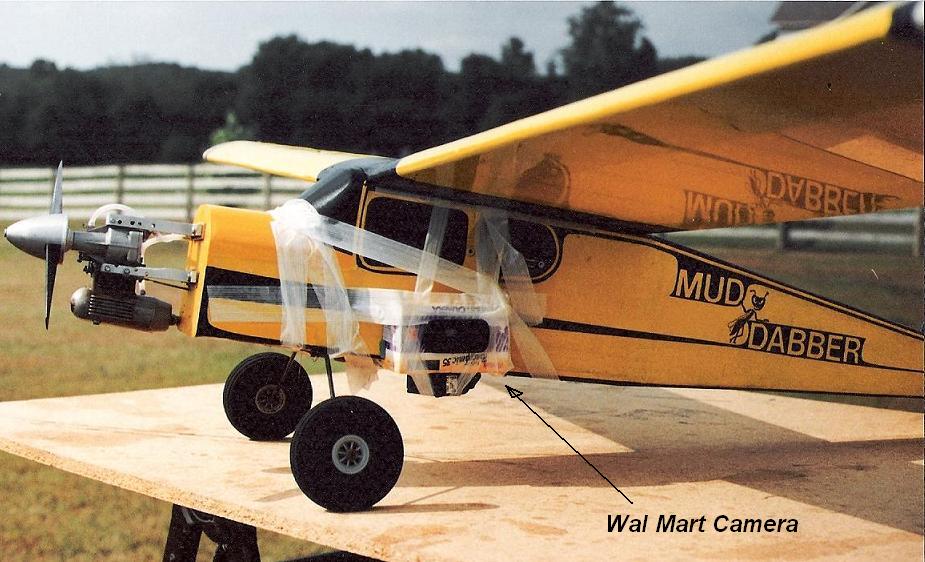 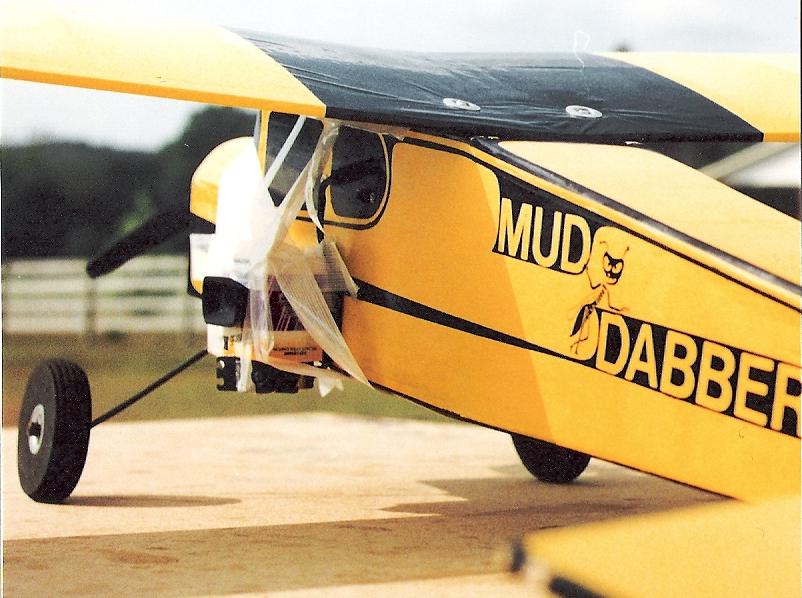 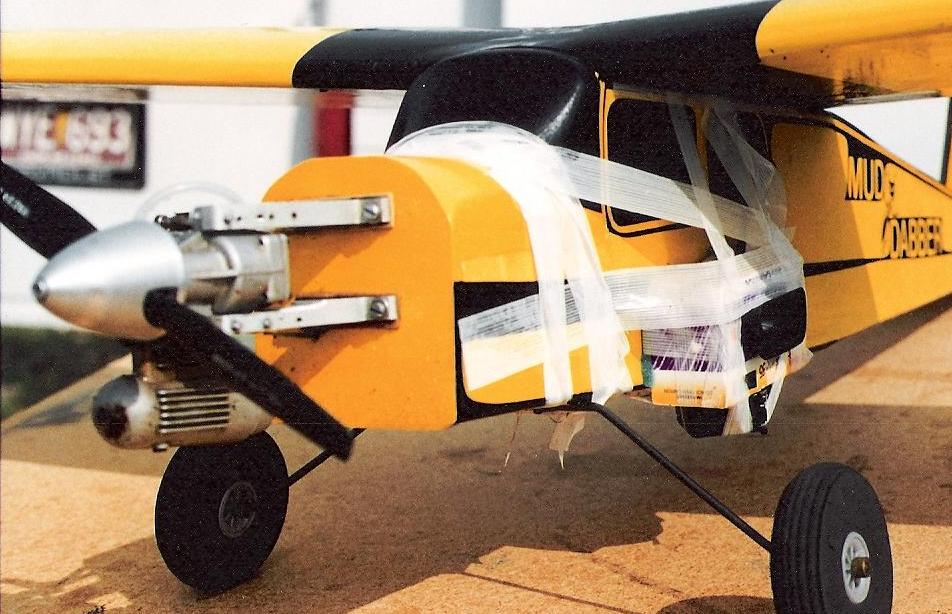 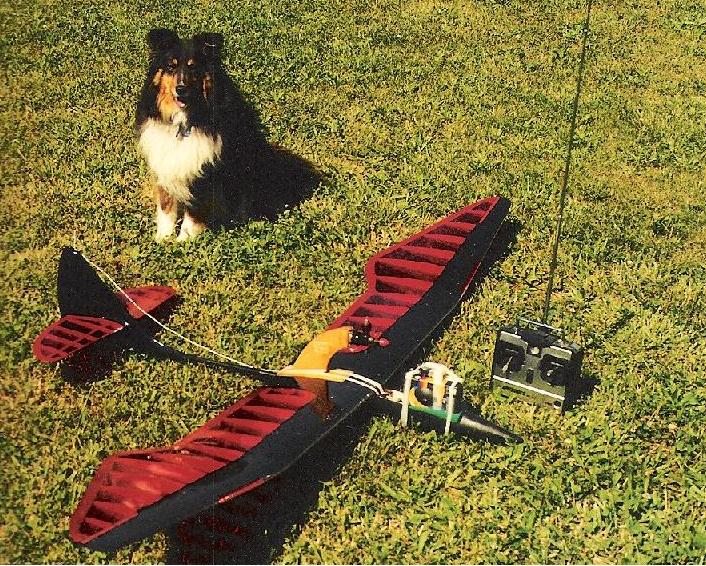 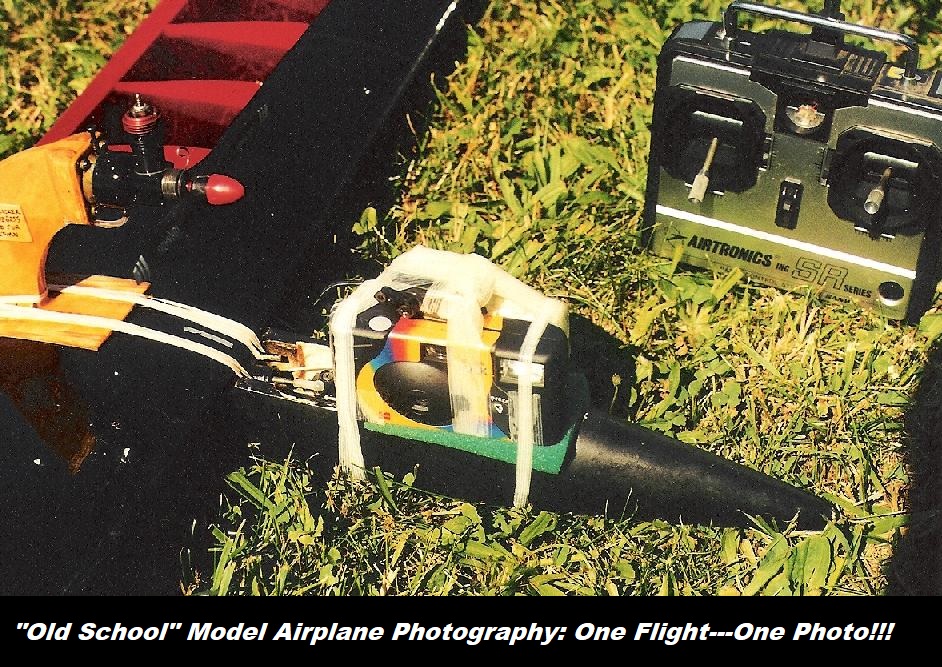 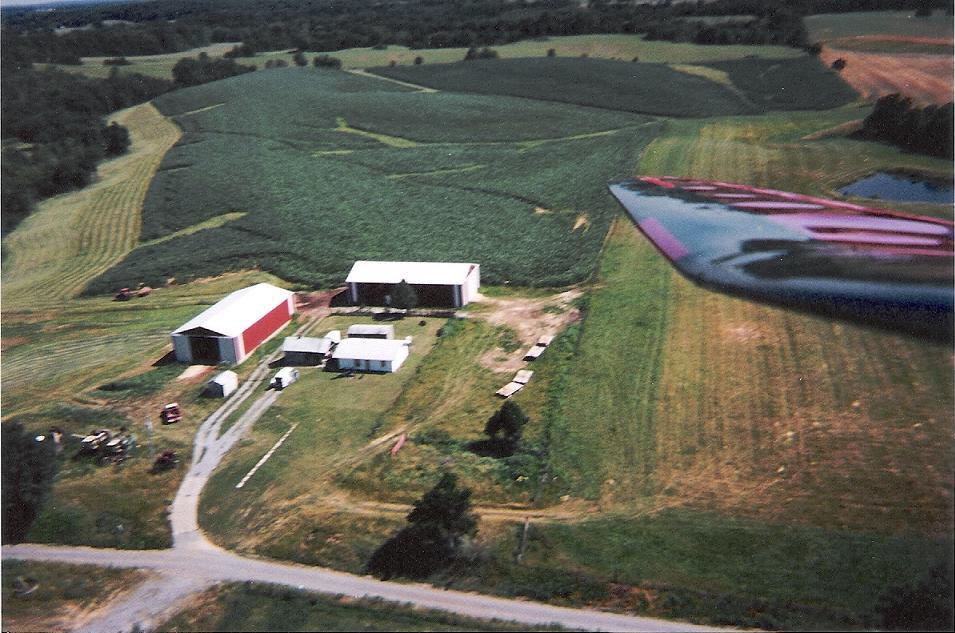 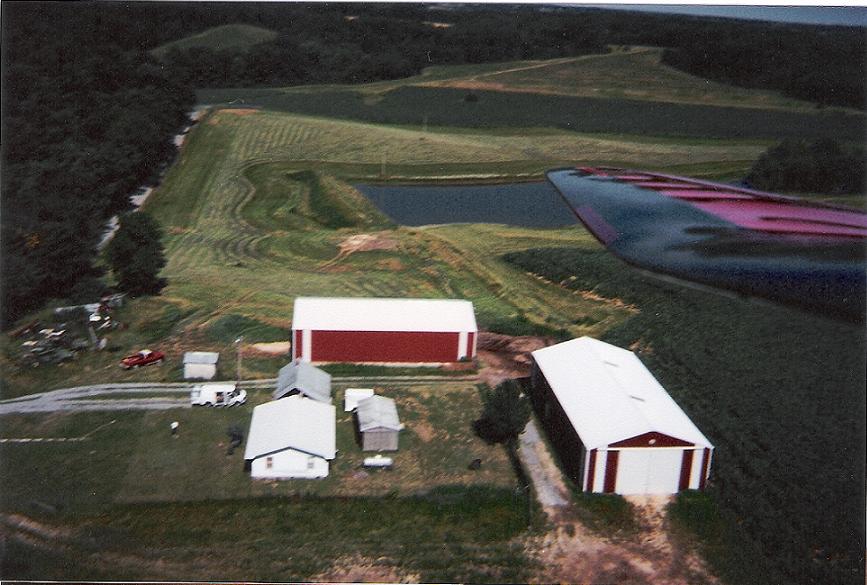 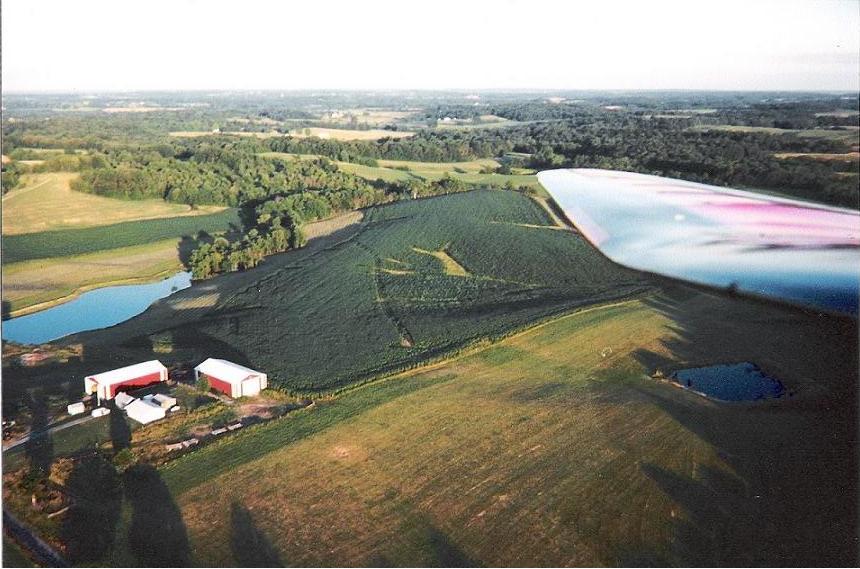 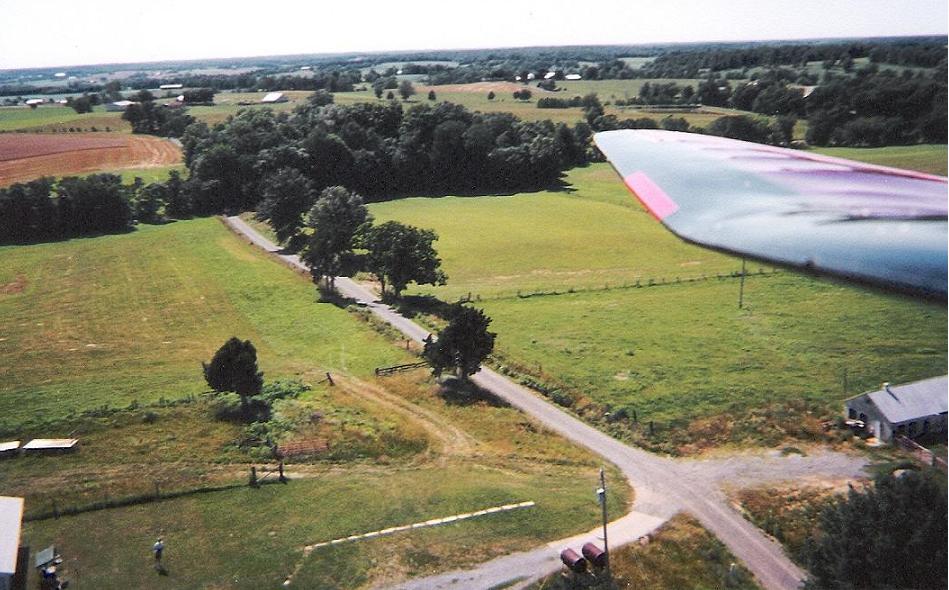 When our only child was about to be born, I purchased a "small" (at that time) Sony video camcorder to record events. That summer I bravely installed it inside the cabin of my 1/4 scale Sig Cub. I had fitted an OS Pegasus 240 to this plane and figured a video would be pretty cool. So I installed the camera, turned it on and attached the wing and struts to get the aircraft mobile, then fired up the engine and flew it approximately 5 miles around a group of islands (where I own a summer camp) from a friend's boat. I figured that the video was impressive at the time. The first time went off without a hitch (pretty cool seeing yourself steering your plane from a boat). The second time there was some sort of interference between the camera and the receiver and I hastily landed the plane and shelved this idea for the time being. Video from up high was interesting. Video close to the water was not, kind of the opposite of videos taken from the ground where when the airplane is up high video is boring.

Videos from drones far exceed the quality I was able to achieve with and 8mm camcorder, but the difference was in the sound. The Pegasus had so much power that it cruised at an rpm not far from what a real Cub would turn.

So you were not alone in your quest for pictures!

Kodachrome
You give us those nice bright colors
You give us the greens of summers
Makes you think all the world's a sunny day, oh yeah!
I got a Nikon camera
I love to take a photograph
So Mama, don't take my Kodachrome away

Love the Collie. One just like it made friends with me at the auto parts store this morning.

I attach these small Keychain cameras to my COX powered RC planes, and the quality of my flight videos is, well not the best, but at least good to demonstrate e.g. why I would not be a passenger on a plane where I am the captain. The smallest RC plane I shot on board video with is a 010 TeeDee powered Sharkface. 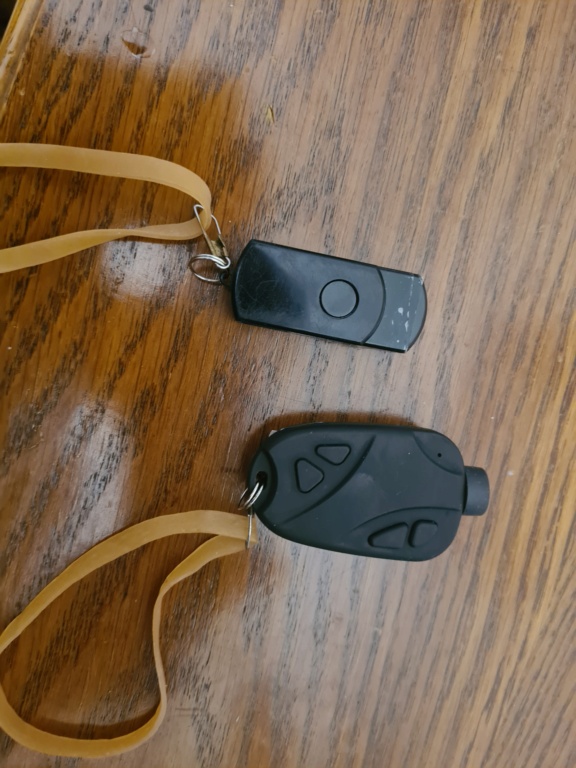 
A 8+minute video is not fully entertaining, but the audio recording allows me to audio tach the engine on board. I just play the video on my Android phone and run the RPM Gauge app in parallel.

Yeah we have came a long way since the 80s . but you know then you would do what it takes to get done what you want or dreams come true . I know I enjoy your photos' and videos adventures in to the a bliss .. I got a chuckle out of the mounting of a motion picture camera on your bird

Still some pretty good pics from the old box cameras !

getback wrote:Yeah we have came a long way since the 80s . but you know then you would do what it takes to get done what you want or dreams come true . I know I enjoy your photos' and videos adventures in to the a bliss .. I got a chuckle out of the mounting of a motion picture camera on your bird

Still some pretty good pics from the old box cameras !

The REALLY irritating part about the movie-camera crash is that the initial impact knocked out the camera, so I didn't even get footage of the wreck!!!!

Well that sucked , i was thinking of asking about that footage , but i figured if you had it you would have shown it