» Cox Conquest, mods and experiences.
by Surfer_kris Today at 2:45 pm

Looking good CA.
Filters on cars a very good idea, much more dirt
At ground level.
I used to use a bit of household sponge.
On subject of filters Her Ladyships old stockings
Are great for filtering fuel just don't tell her where
They went....

may I know if it have differential gear ?

Hi, the beetle has direct drive. The f1 car has a differential gear.

I like your british humor! Everytime funny to read your comments, keep it up!

Have you been to these guys for the one way bearing

thanks for the link, very useful. The bearing used in my car looks different. The next time I dissasemble the motor, I will check the diameter, maybe they can help.

At the moment the weather is to bad for an engine test. But I will keep you informed if the KB Backplate runs

So the Ferrari will be finished this summer and I have got some spare parts left for the Espo.
The best is, that the engine is complete with the flywheel and clutch, muffler. These parts are extreme hard to get.
The price was also fair.
http://www.ebay.de/itm/Kyosho-F1-Ferrari-Alt-mit-Cox-in-Teilen-/251218836138?_trksid=p2047675.l2557&ssPageName=STRK%3AMEWAX%3AIT&nma=true&si=Khav9tDtN2umCY8su5Ijx0qph3I%253D&orig_cvip=true&rt=nc

Or maybe I will construct a conversion from the parts in my stock. I am still looking for a Kyosho Electric RC Car which uses the same Chassis, It think it would be easy to convert it from electro to a cox nitro with the parts I have:

Here is a you tube link with the different group C Cars I like to use:

But they are hard to find too.

you bougth this parts

ok the next are mine

i have build a cox r89c with this chassi 2. car is a mini copper and the third car i build this time is a front wheel drive car with honda civic body

sadly not 1 EURO, i made an buy it now offer and the seller agreed. Nethertheless it was a good deal. Now I can complete the above mentioned ferrari and the Espo will get an ,,big'' service. The parts lot also includes ball bearings for the front wheels-

Maybe I will construct something with the remaining parts.

@mario: Sorry for that, but now I have enough parts, so you can buy everything else listed

Nice to hear that there are other people in germany who are interested in these Cars.

BTW: Do you have pictures of the R89 and the civic? Would be very interesting. Please feel free to post a pic here.

The Mini you mentioned is a self construction on this chassis, or do you mean the Kyosho Mini Cooper 0.49? I own the counterpart - vw top chop beetle. The Mini is much more detailled and I am still waiting for the offer of my buddy who wants to sell me this car since a half year

got pics im on work to load them up

i find this forum today now

primera_p11 wrote:got pics im on work to load them up

i find this forum today now

So Welcome to the forum, you will have a great time!
https://www.coxengineforum.com/f6-introduction 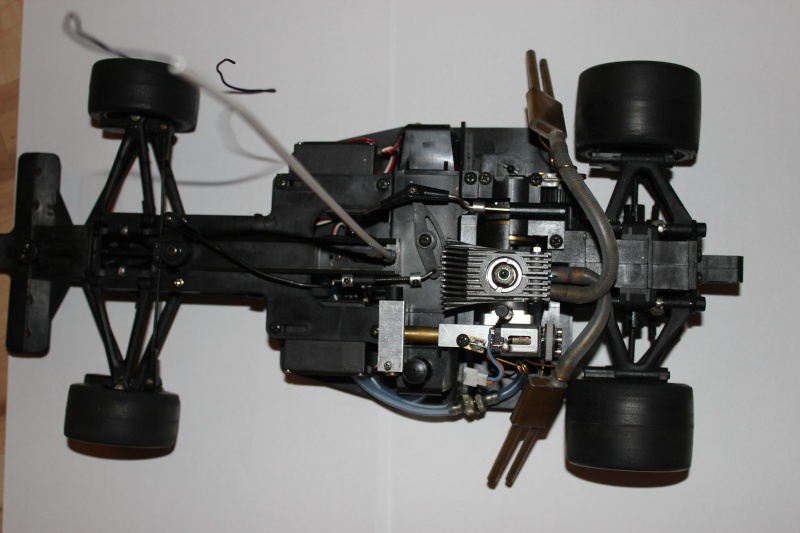 Did you build a throttle via the intake

?
I see also an aftermarket glow head. Can you tell us more about the details? 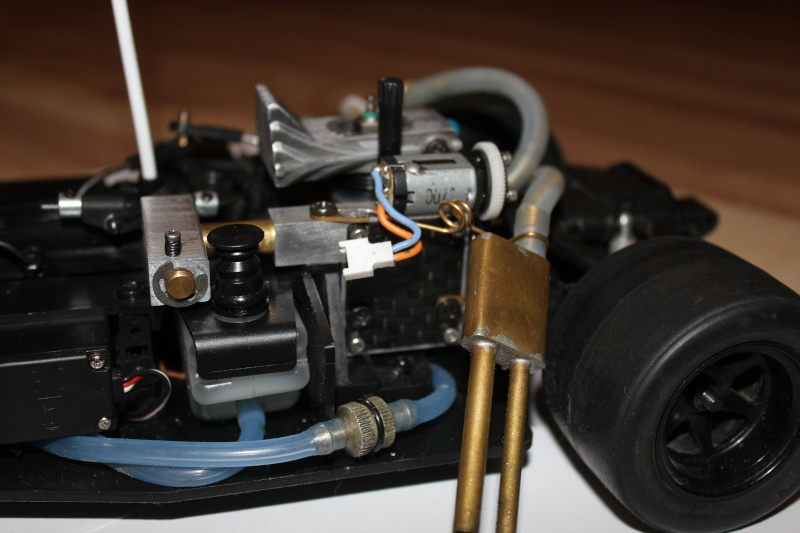 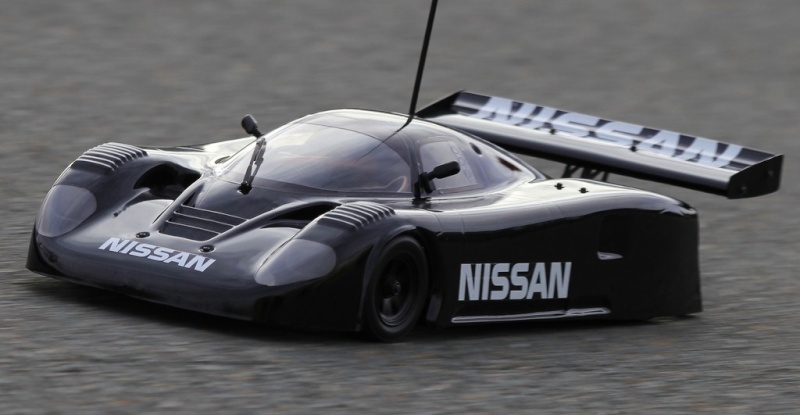 this is the body on a electro chassi 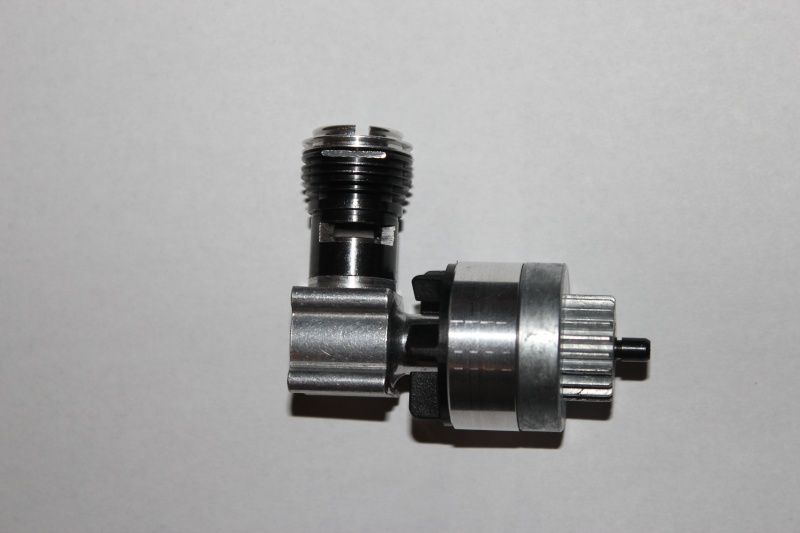 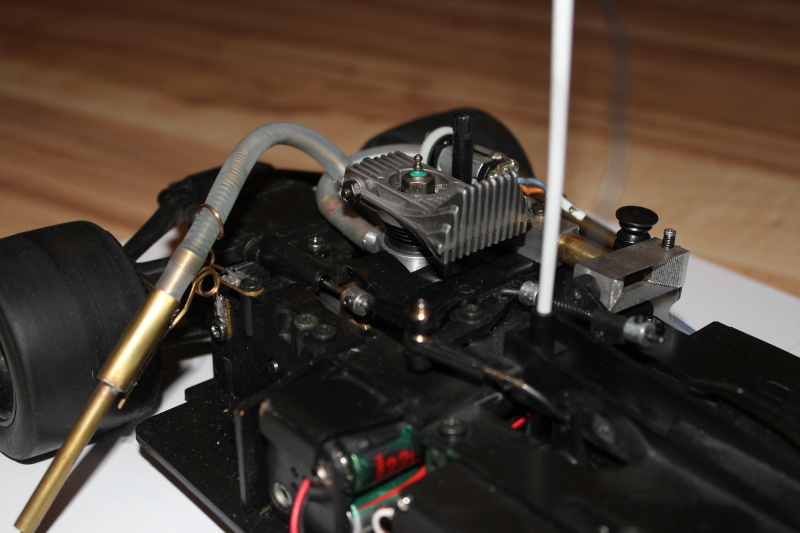 Wow-Geil That looks really interesting and clean, seems to be a lot of engineering around the intake.

I hope we will see and hear more about this project. It is of course a great accomplishment for this tread.

What is the duty of the micro e-

motor. Looks like it is throttled over the valve which sits normally in the exhaust.

The flywheel looks different and you have mounted the fan (do you know if this was purchased with the kit, i remember i had no one inside the box when I assembled the car in 1993?)

the flywheel is made by my self because i don t find a original. this engine is for the coxff civic project but similar to the engine in the r89c

problem is it don t work. so it takes a little while when i give top speed on the radio controll the car comes slowly to top speed

primera_p11 wrote:the flywheel is made by my self because i don t find a original. this engine is for the coxff civic project but similar to the engine in the r89c

problem is it don t work. so it takes a little while when i give top speed on the radio controll the car comes slowly to top speed

I already feared that there is something special

with the intake, nice work. But if you reach top speed, is it faster than the normal version or similar? Do you know these throttles:
http://coxengines.ca/throttle-conversion-for-cox-049-engine-tanked.html

Regarding the cooling fan, I also have seen one on ebay and I am wondering to which model it should fit. Maybe it was an aftermarket tuning part or only available in the late models (The Beetle and Mini Cooper have no cooling fan I guess).
I will look for one, I think it will cool the engine more reliable than the cooling head (especially while needle adjustment).

I have seen you mounted a head for normal glow plugs, did you have to dress it to size? And does it better start/run with a normal plug (I know the advantage of different heat levels) but was allways happy with the original glowhead.

).
After some seal work on the engine it is much better now, I was only too lazy to clean the whole chassis after every run ( I ran over a litre this summer, thereofre it is not too filthy

). But the Engine still spits fuel while driving/starting (sometimes) on the chassis, which is quite normal for a cox I think.

BTW: What fuel do you use, or do you pre-mix your fuel by yourself?

Yesterday I found a promotion video of Kyosho on you tube. You find both Kyosho's 0.49 Ferarri and Espo Larousee at Minute 2:02. Don't pull the speakers on, the music is hardcore end-eighties (but the sound of the 0.49 is great)


Just want to add, that the chassis was also available as an Penzoil Indy Car, I still own the Box, but gave the car away some years ago

Here is a link to the mentioned body:
http://www.kyoshoforum.com/showthread.php?t=928

topspeed i don t know it s fast enough for me

it looks god . it spread more the oil to the chassi then cooling the engine down

Which cylinder do you use? Looks different from the original slitted one ?

primera_p11 wrote:i use this one i think it s better to run then the normal

Ah ok, I also thought about to use a cylinder with more performance, but I have got the problem with the muffler.
In my configuration it would only work, if i will turn the barrel to a smaller diameter which is not so easy due to the thin material.

I am thinking of removing the splitted discharge unit of the original cylinder, but due to bad availabillity of this ,,special ground'' cylinder I didn't do that yet.

BTW: The parts lot will be delivered tomorrow

Regarding the fuel you use: I was told to use castor basic fuel only or add castor oil because syntetic based fuels would not lube enough. How is the nitro content of the fuel you use?

hi no normal 16% fuel is absolutli ok when the engine is damaged i buy a new one. it cost 12 dollar (cylinder) and
at this time i it is the first cylinder and it runs great no problems

Ok if it Works it is fine. I am using 25% and add some castor in order to prevent wear out. I don't think it matters much because most time it is not full throttle and high revs ( cox in a plane is allways at rev limit).

Just a line about fuel and cheap cylinders, in my opinion the old type tend to be better than the new ones
and if you have the old type they are worth keeping.
Also, it's the ball and socket on the bottom of the piston you're wearing out by using synthetic, so after a very few runs when the socket starts to wear, the compression drops, the timing is wrong and you have an
engine that doesn't run as well as it should.
If you want some proper fuel PM me and I'll send you a little.