Thanks for doing this Ron!

Also, please keep "So Stock it's Silly" as a small token of appreciation for your valiant efforts, and return "Crazy Momma" when convenient...there's no rush as the Skunk Works has plenty of fish in the pan anyway!

Your too kind, I do appeciate it very much. I normally would pass, but seeing as I am getting low in the TD .049/.051 area I am happy to oblige. If you ever need it back let me know. For now it will pull my Baby Clown.

Clown away Dude! I ain't gonna be wanting it back. You and I both know of the rampant generosity that runs amuck in this forum, and I can't let them other guys get too far ahead !

I'll send it's box along with your wedge tanks....just in case you might someday choose to become (gasp) a "Static Collector" !!!

Just a note of thanks for your stellar efforts to provide a wonderful winter diversion. I WAS indeed anxious to see how it would go off. Not that I was worried...just that I always wonder if others can operate/needle my engines as well as I can. OBVIOUSLY, you can! I think some people think their engines are too precious/valuable to be entered, but I'm not one of them. I'm happy with the results in light that I placed LAST in 'unlimited' last year with an experimental engine. Sometimes that happens!
There is NO MAN that Coxes have not brought down to their knees in puzzlement at one time or another... The key I've found is to keep at it & attempt to LEARN what they're trying to tell you. It's also quite OK NOT to have any awards/prizes. For the love of 'trophies' can often lead to hard feelings I've found from years of competition.
Anyways, thanks again for volunteering your time, Ron. It was a great show.


[quote="cribbs74"]Ok guys here goes the moment has arrived, but first

I just wanted to say thank you to all you guys who sent in engines and trusting me not to break them.

I was a bit dissapointed. The engine I sent in tops out at just over 23,000 RPM running 35% nitro and a 5-3 Tornado prop. I really didn't think the difference would be so great.

@jsesere wrote:I was a bit dissapointed. The engine I sent in tops out at just over 23,000 RPM running 35% nitro and a 5-3 Tornado prop. I really didn't think the difference would be so great.

The Nitro was 25% and that .049 you sent sure looked mean enough to top 20K. I will say environmental conditions were not too bad high 60's the day I ran yours. Humidity was a tad high at 65%

I really was questioning my tach as I ran all the .049's first. I was expecting 22K plus seeing as stock they supposedly do 21K.

I followed .049's with the .010 class as my son kept asking me to run the little ones. They were right on par with factory figures so I stopped second guessing the tach. Maybe the 5x3 competition prop slowed them down? It was balanced using my top flite precision magnetic balancer.

The cox 5x3 are probably the highest load 5x3 props that one can find, they pull nice in the air though with their large area blades. The Tornado 5x3 on the other hand is great for bench running...

I asked Kim to bench test it for me last year when I broke my hand and this is what he came up with. You can see it's all over the place RPM wise.

Thanks Ron for hosting this, and trying so hard with the .010. I went through the entire engine twice before I sent it off and everything looked like new.

Food for thought on the Tach race results...

Hi Guys,
I was just going over my engine notes from home about the engines I sent for the recent Tach-Off.
Two of three of my engines turned up exactly as they did here at home, before they were sent off.
This means to me that Rons' Tach (+ fuel & prop) was quite accurate. (note: dead accurate or not, it doesn't really matter as long as the same tach is used for everybody)
My third (unlimited) engine was down ~500 rpm for some reason... Perhaps it has degraded, I don't know... I'll need to re-check it in the spring. It is not unusual for Coxes to degrade in RPM when various faults start appearing. Anything from a loose glow plug /head, worn/bent glow element to varnish build-up, loose/leaking venturi, etc...

The Cox 5X3 Competition Grey prop is indeed a heavy load! How heavy? Nearly 2,000 RPM less than the standard APC 4.75D X 4P prop!! Couple that with 25% nitro (rather than the standard 35% nitro fuel), & your engine is certainly going to be down on expected RPM.
Those of you who follow my work will remember me saying the Galbreath Head coupled with a Nelson Heavy Duty plug can often yield (100 - 1,000) RPM increase. Under these current conditions, this combo yielded 1,000 & 1,200 RPM increases. This is quite significant as the results show. Using a regular TeeDee glow head, my engines are really no bettter (& possibly worse) than the rest of the field.
Also, one item of note: I believe my best (Unlimited) engine uses crankcase pressure fuel feed & a bored out .150" I.D. venturi. This is a mod than can give up to 1,000 RPM increase. However, with this fuel & prop combo, pressurising & large venturi really showed no RPM increase over a a std. venturi & straight suction. This is strange, but my tach don't lie. I decided to leave it alone with the pressure set-up, because at least there was no RPM loss.
I haven't run TeeDee's for many years but I seem to remember that large venturi's only work with high rpm's (21,000+). This high an RPM number needs a definately lighter prop load & often more nitro.
This might explain why when using the current heavy prop & relatively lower nitro, did not show the expected gain. As Joe noticed, the difference was indeed quite a bit greater than expected! As Ron noticed, Factory quoted RPM is indeed a "best case scenario". This is why many very high performance engine manufacturers will not even list the RPM their engines will do. Some may suggest a useful 'operating range', but that's about it. A few flat out lie (for advertizing purposes) & you can spend huge amounts of time & effort chasing numbers that really don't exist in reality.

I did have to spend 2 afternoons in my (cold) garage bench running. The entire first days results were crap + I cut up my fingers! I nearly gave up but decided on one more bench session as the weather was still acceptable. The 2nd session (with a much improved test stand & tank arrangement) was much more productive & showed 1,200 - 2,000 RPM increases with minor changes.
Changes being, changing head shims, changing head types, changing venturi's, & in one case changing a piston. Now that my fingers are pretty much healed up, I suppose the effort was worth it...but at the time I sure didn't think so!
I write this kind of thing in hopes of generating more interest. We are running (out of production) TeeDee engines that really have almost no competition use anymore. SOoo, why keep letting them collect dust?? I admire ALL those that entered & ANYONE that still flies with these little gems today. Keep 'em flying!

I don't think I will ever see the day I run out of production engines, Babe Bee's and 190 series at least.

That explains it. Glad it wasn't me! Seeing as this is the first Rodeo for me I had some doubt.......

I noticed you did not run any of your engines in the tach race? Any reason why?

Time! Initially I was considering doing that to round out the classes. After the first day I was in a hurry to finish before sunset. That globee tach worked well as long as I had daylight.

All of the engines are on the way home as of yesterday morning. ExcepPt Paul Gibeault and EME. Please contact me once they arrive so I know they made it safe.

Thanks! They have departed OK.

I know this is a little after-the-fact but, one way to avoid the hassle of 2-56 hardware is to make up a set of hardwood blocks, fitted to the back of the test stand.

I got myself a free, near-lifetime supply from the scrap bin of my friendly local cabinet shop.

With just a few minutes' investment, you can make several sets to match anything you're gonna mount to these stands, and REALLY cut down your time by using #2 socket head screws to hold the engines.

Just to be a bit fancy, I give the blocks a quick coating of thin CA to stretch out their useful life. 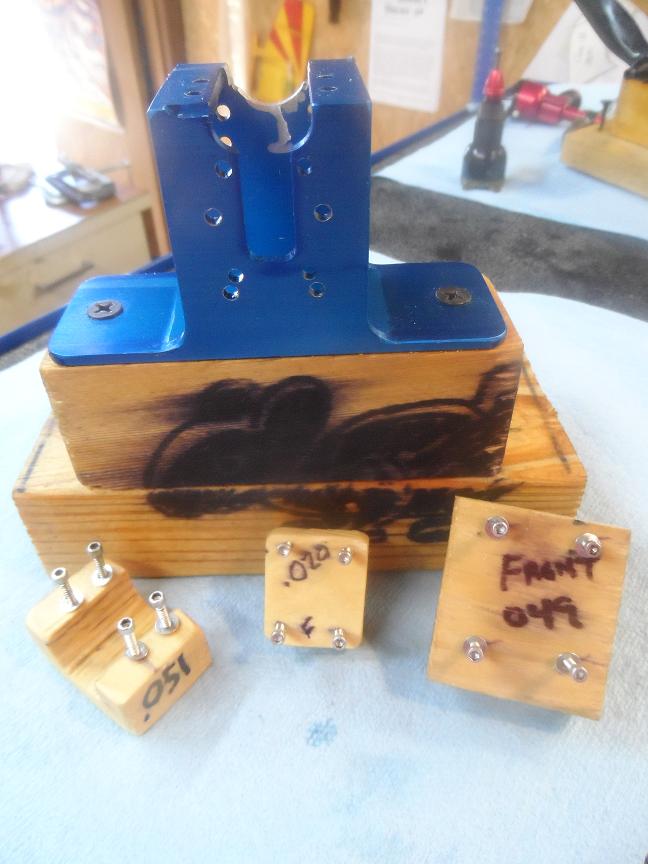 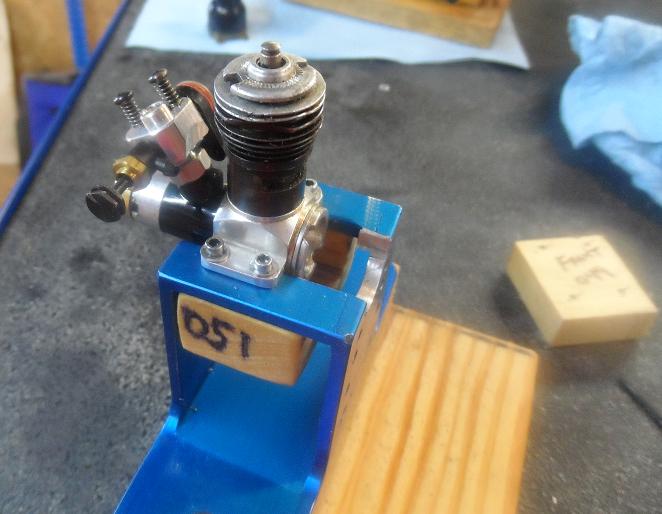 What do you need the aluminium for then? 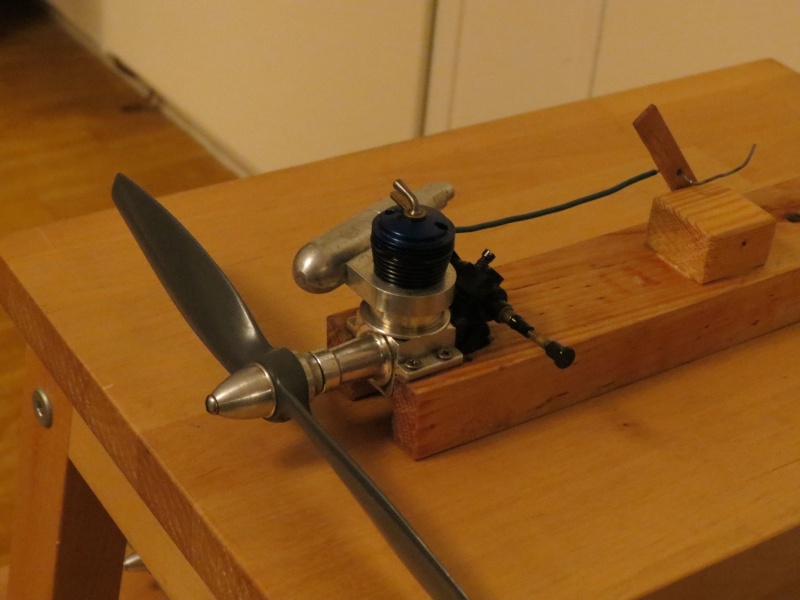 Good idea Kim, I think the best solution would be to make that stand out of steel and then tap the holes. Better yet weld bungs behind the holes for a little more meat.

Maybe so, but that hardwood block takes the threads of those wood screws and won't let them back out. Either way...whatever gets it done !

@Kim wrote:Maybe so, but that hardwood block takes the threads of those wood screws and won't let them back out. Either way...whatever gets it done !

True, it certainly would have helped!

Got my engines back today. Thanks Ron!

Self-tappers have always scared me. Never really had a run where they didn't try to creep out. All kinds of wood, tapped them in perpendicular to the grain.