How are you running this engine? Is it on a plane? Is it on a test stand? The AME is not going to be happy running on suction. It would be considerably happier on muffler pressure or better yet running on a bladder. The problem with bladder pressure is that the stock needle isn't effective enough to run it on pressure. Ken

Alrighty! Success was had this weekend.

Ken - It's running on a test stand with muffler pressure.

When last I reported here, I'd cut a lube channel in the thrust bearing and test run the engine with no great success. Saturday morning, I fitted the engine with 2 gaskets and a Nelson Hot plug and my trusty APC 6x2 (Don't have anything lighter on hand).

So, I chucked the stand in my vice and began to prime the engine.... Only it stuck fast at TDC! I tore it down and found that the last runs (which like previous ones had been very "Hot", and could only be sustained with glow applied) had severely varnished the piston and cylinder. Even the top eye of the conrod was varnished. I cleaned it all up with fuel. I found it basically unchanged after cleaning from usual, turning freely with a bit of "pinch" near TDC.

Re-assembled, and back on the test stand, I primed the engine and applied my starter. It started up, 4 cycling. I leaned it to just into the 2 cycle realm and removed glow.... And it held! I tached it at 21,000 RPM. It throttled, idling down into the 12K range easily enough. It recovered to full RPM. On shutdown, an ounce of fuel later, it didn't smoke (first time for this engine!)

Next I tried some other combos of plugs and compression. 1 gasket + Nelson HD caused it to loose 1500 RPM (19,500), and it didn't idle stably. 2 gaskets and Nelson HD ran as quickly as with the hot plug, but was less likely to recover from idle (quitting half-way to WOT, rich). So, for this engine, the Nelson hot plus 2 gaskets seems the winner.

Now, I'm not sure why all this is. I certainly only began to have successful runs after cutting the lube channel, but I'm not sure if that's relevant or a red herring. I have, in the past, tried various comp ratios and both the HD and Hot plugs and with the Norvel head, but never succeeded before. The prop and fuel tank haven't changed. Just a case of "enough running in"? I dunno. But I have a new engine now that performs well, even on 15%. I'll try it on 25% soon!

Me too! I've owned this engine now for perhaps 6 or 7 years, but until this weekend, it never ran more than 30 seconds at a time. I was slightly incredulous when it actually ran properly Saturday morning!

I don't know what the true problem was, but with some ideas from here and my own thoughts, it seems to have buckled to pressure and run!

Glad to hear you got it straightened out ,there are really some good running engines when you get the combanation right . What you going to put it on or have plans yet? Eric

I'm not sure yet... My 5 year old son wants me to build a smaller version of my 40 size Dynaflite Mustang for it... I'll scratch something up, no doubt. My druthers are a pylon racer type aircraft, perhaps a Dago Red inspired thing...

At very least, it's a viable spare for my Aquastar, though it's unlikely to idle as well as its Big Mig....

FWIW, this is the test stand I use for beam mounted 1/2a engines: 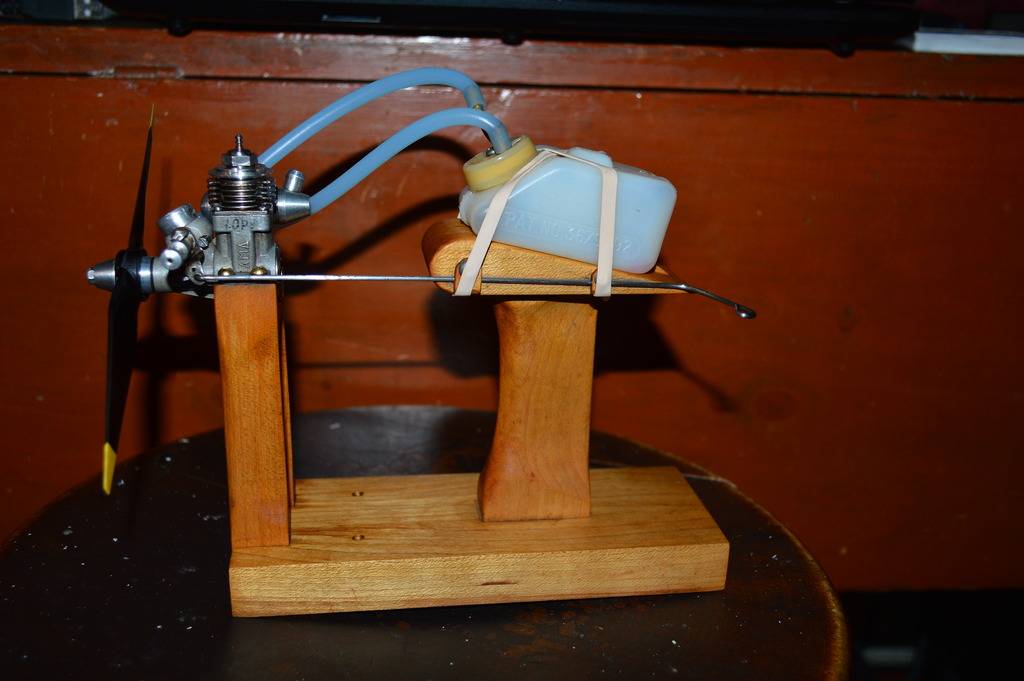 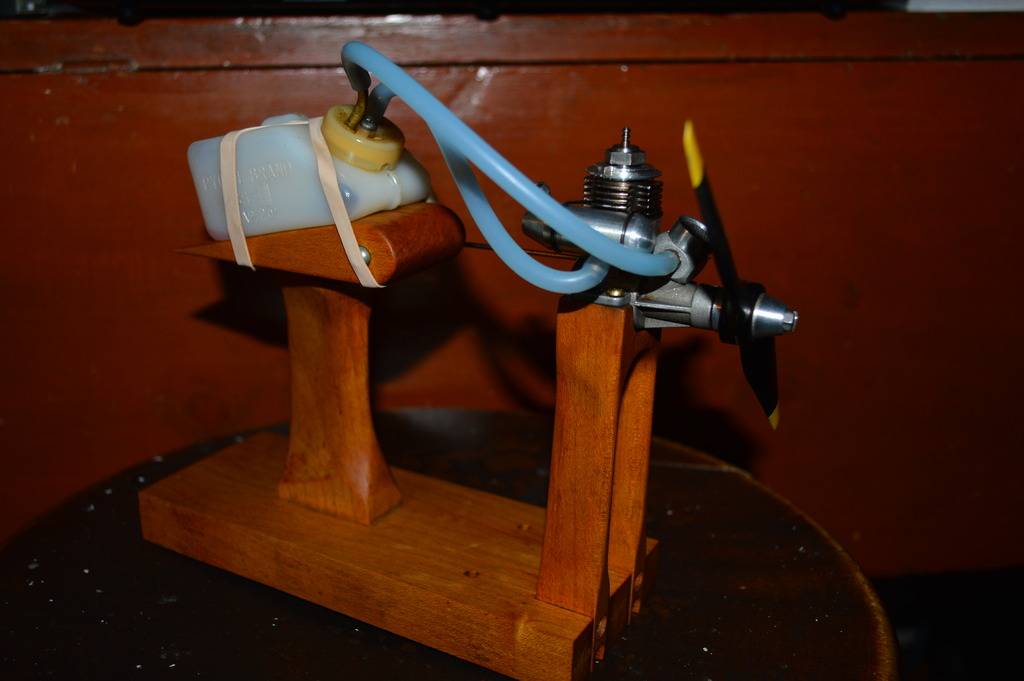 Good to see you got it running, it is often very simple issues once you identify the problem, which is the tricky bit I guess...

Here is a guide from Norvel regarding what rpm numbers one could expect from these engines with different props. I don't know the Nitro level they used for these tests though. 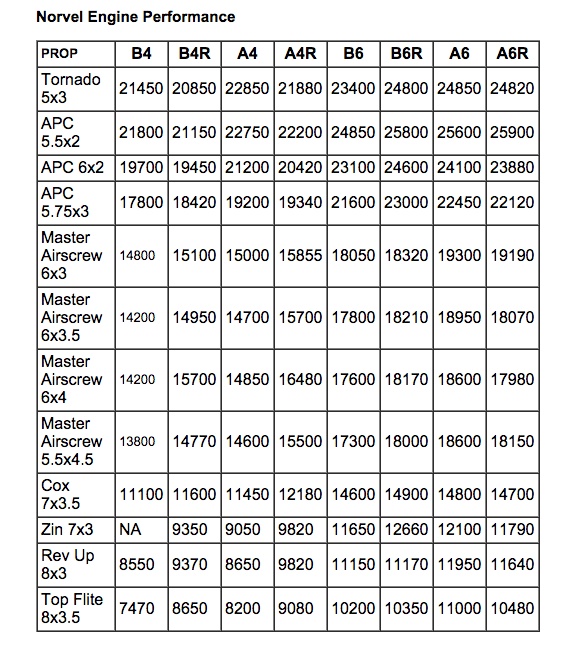 Cool, good info there, but some of it strikes me as strange...

Anyway, such numbers seem to vary a fair bit to me, from engine to engine, from day to day (500 rpm between 2 days is not unheard of)... But I think I'm in the ballpark.

Now to think up a plane for the AME to drive... Quick, maneuverable and fun being what I enjoy most. Something in the 80-100mph range would be nice

Better yet if it can ROG from a grass field.

Yes, I think the numbers should only be taken as a rough guide. There are certainly lots of "natural" variations from one engine to another etc. It does give a rough idea though about what power and revs one can expect from different props.

Regarding plane style, I would skip the landing gear (too much drag in the air) and aim for something lightweight and slim. My favourite, so far, is the "Yellow Jacket" from Morris hobbies. With a total weight around 10oz it is simply a blast to fly with a 5x4 prop and a Norvel .061 in the front. Trust to weight ratio is really something else than in the old years, and big loops are a blast. 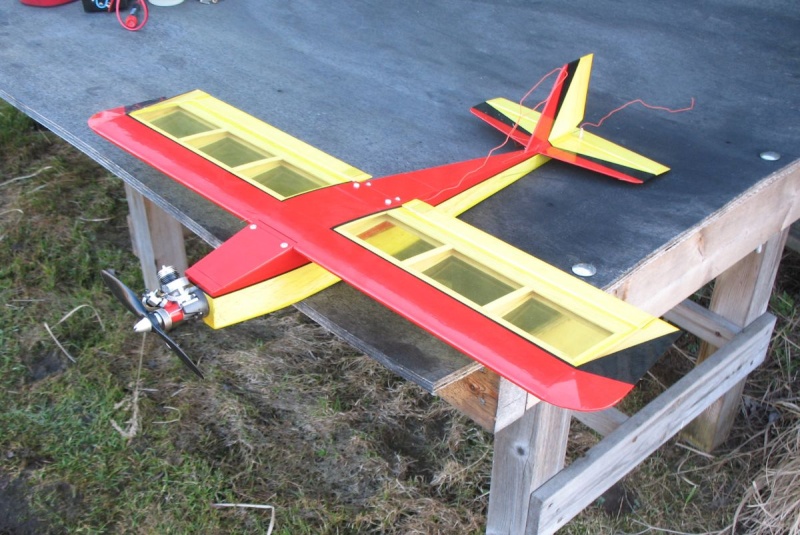 OOOh, that does look fun! (Ha! Found your RCU post on its build) 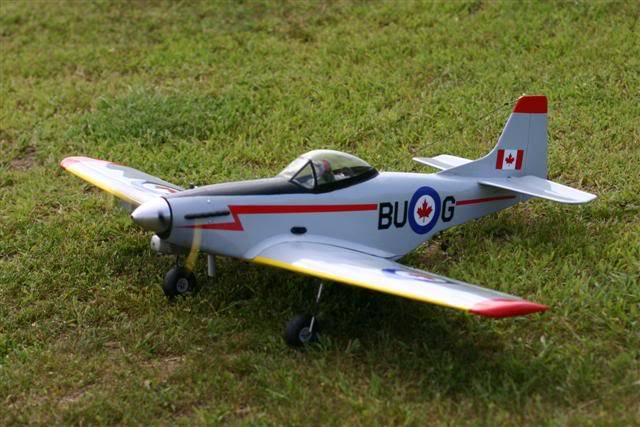 All my 1/2a stuff to date (LOL, both planes, Aquastar and Northern Flicker) are pretty tame fliers...