Two can play at that

Gliders are doing over 500mph now (no motor). Also, they are measuring the speed after a U-turn, lol.


Honestly, I was showing the very high G turns in the video I posted, not so much the speed.

On a 049 motor, does someone know the conrod length? I googled it without any luck. tia!

--Oz-- wrote:On a 049 motor, does someone know the conrod length? I googled it without any luck. tia!

What do you need the conrod length for? Or do you mean the distance from the big-end to the top of the piston?

If you want to calculate the difference in timing when you move the cylinder, it is the stroke that is important and it should be 0.386" (AFAIK).

--Oz-- wrote:On a 049 motor, does someone know the conrod length? I googled it without any luck. tia!

What do you need the conrod length for? Or do you mean the distance from the big-end to the top of the piston?

If you want to calculate the difference in timing when you move the cylinder, it is the stroke that is important and it should be 0.386" (AFAIK).

Rod length is required to calculate port timing from crank angle and height.

Yep, thats exactly what I want it for!

At the position of the crank were the exhaust opens/closes the length of the rod is not that important. The distance from the crank pin to the crank center is the most important parameter.

Surfer_kris wrote:At the position of the crank were the exhaust opens/closes the length of the rod is not that important. The distance from the crank pin to the crank center is the most important parameter.

Sorry, but the error is too large to omit.

Yes, the numbers don't seem to add up...
I was quoting the numbers provided by the pilot, but I guess those might be doppler "inflated".

Surfer_kris wrote:At the position of the crank were the exhaust opens/closes the length of the rod is not that important. The distance from the crank pin to the crank center is the most important parameter.

Sorry, but the error is too large to omit.

I will have to check it in detail for a cox engine then. For large exhaust durations and small changes of the cylinder height I have found it to be negligible in the past. The big end of the conrod will then mainly move up and down, the sideways motion can be neglected.

Okej, I've checked the maths for an exhaust duration of 130°, which is about right for the cox .049 engines I think (I haven't measured mine). By totally neglecting the influence of a conrod (i.e. assuming an infinitely long rod) we get an error of about 10% in the piston height (for a 1° rotation around the exhaust port closing/opening). To me this is negligible, but it means that we should move the cylinder about 10% more than what we think from looking at the vertical movement of the crank-pin only.

So a cylinder shim of .0046" will change the port timing by about 1.5° (and the duration by 3°) using the approximation, while a more correct calculation gives that about .005" is needed for that timing change.

So, again this is close enough for some practical trial and error testing, as I see it.

Calculating duration from geometry while neglecting rod angle results in a large error.

Some pilots talk about timing degrees  for say exhaust. Lowering the cylinder from 0.0 to say 0.025 (in 0.005 increments) I wanted to see the timing difference in degree and % numbers. So I just need the conrod length to work out the numbers, weird its not easily found with google.

It is easier just to use a timing wheel.

The best way to get a good jump in timing is to file the exhaust port on the top side.
You can march along removing a given amount until the prop rpm levels off.
At 170° really is the limit with these simple Cox engines. I use a starter so no big deal.
With a tuned pipe a angled cut is best to shove in as much charge density as possible.
Nothing on page 98 but a rap up, a few words and thanks for the questions. 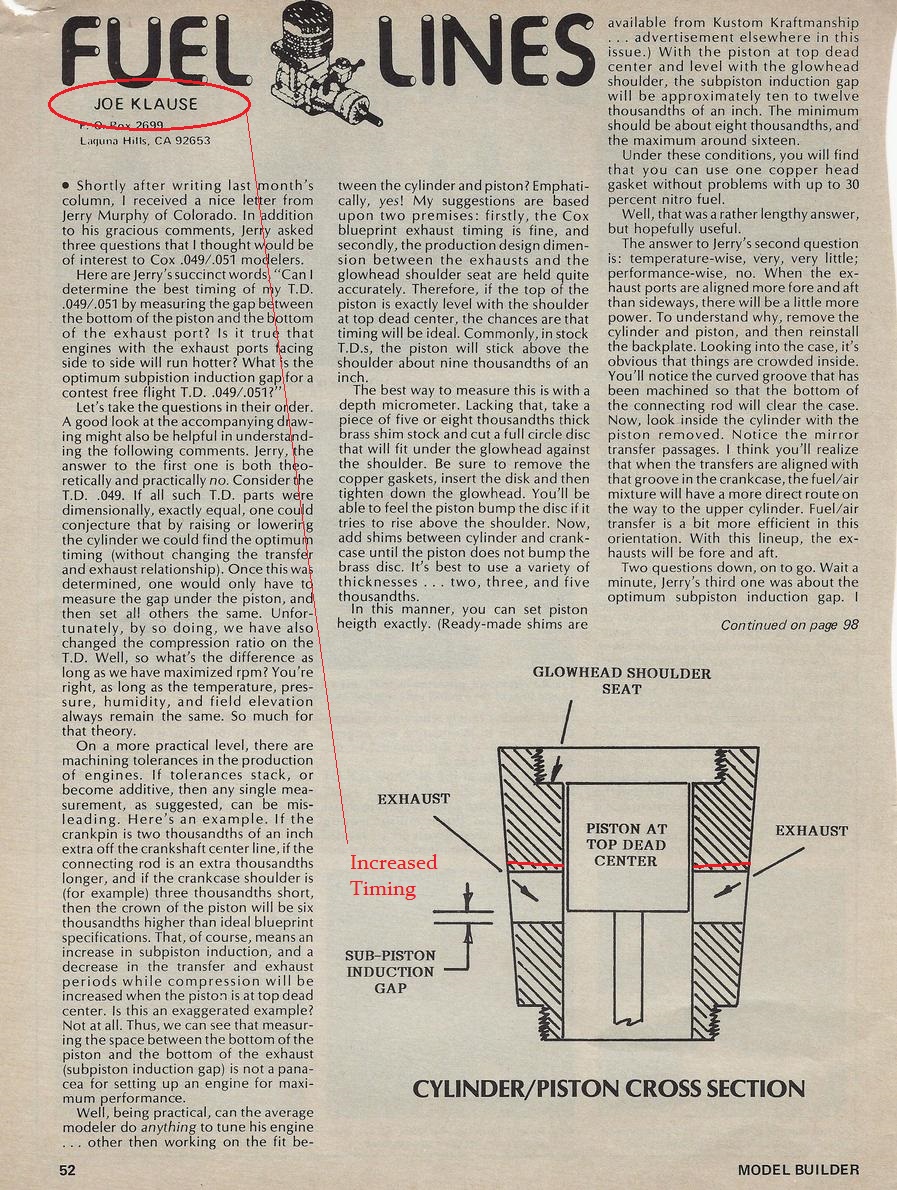 A bundle of articles on my speed thread at RCG. Huge efforts to gain engine performance and with tune pipes.
Today all that is needed is good machined sealed cnc manifold header and a Profi pipe with zero mods to a SPI engine.
++A double tap system is in play the pipe is feeding the engine through the SPI gate too / two fold power induction.
Plug and play now for what consumed hundreds of hours in the 70's of trial and error.

3rd flight and already blown away anything ever done with the TD. Yes it's fun to mess with the engines, design the planes but
if you are not getting out under the blue skies flying you've missed out on the cream of the hobby experience. I am guilty of
proof of concept and moving on to the next challenge myself. Kris still looking forward to your VA .020 project flying with that
lovely DIY exhaust system.

Yes, if you file the exhaust, that is the only change being made, everything else stays the same.

I spend the day at a local CL speed event hosted by Bill Hughes. I got to watch Sasha Valishev fly his F2A at 305kph and get a taste what it takes to make that kind of performance consistently. All the Profi F2A engines are guaranteed to go 290, but essentially none are winners out of the box. There is a tremendous amount of work, tuning, and testing that goes into being a world class competitor. 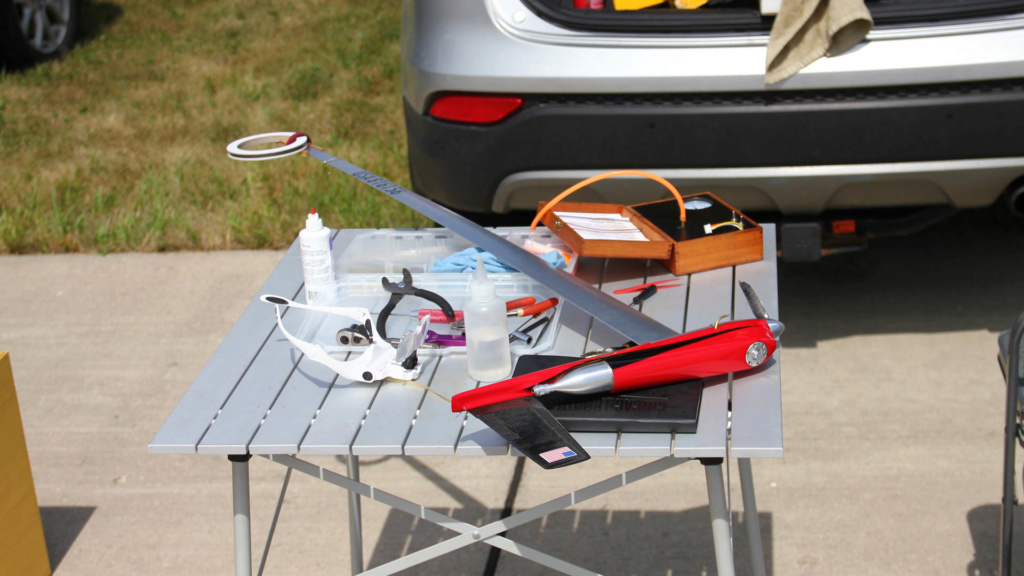 Want to see some magic, true Cox unobtanium? An AAC schneurle TD .15 made by Carl Dodge. Carl made the parts Henry Nelson did the chrome. 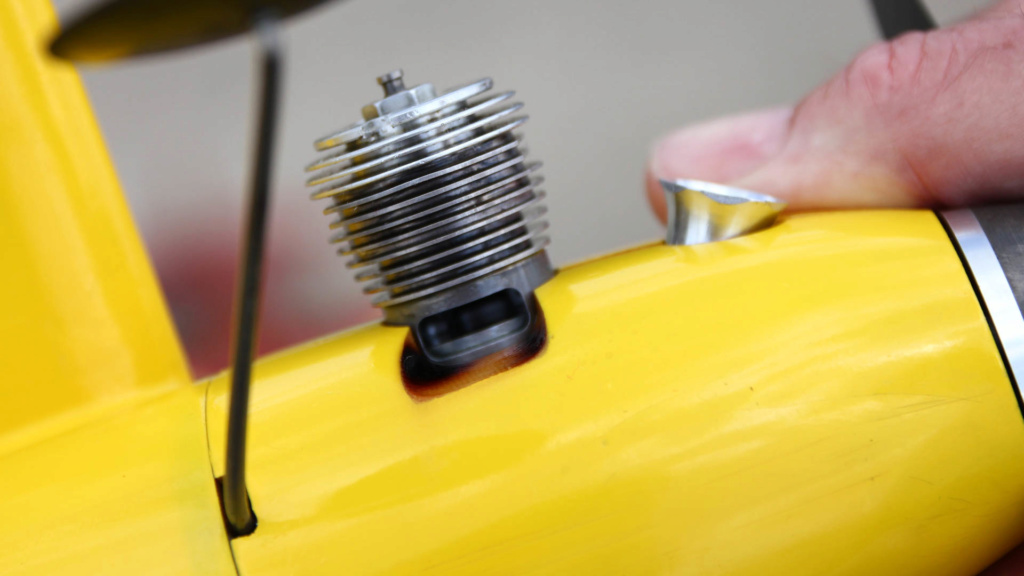 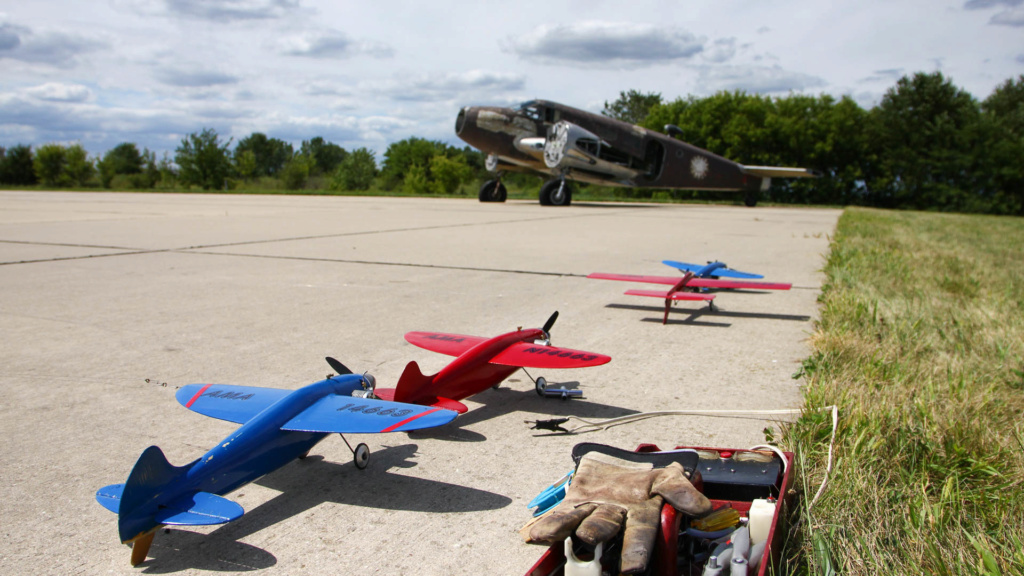 Yes once the engine is set up for best deck height and cylinder orientation.
A simple first effort is to round off all outside edges of the exhaust port to
improve influx and top and sides on the inside.

My goal was to show whats possible bone stock so anyone could repeat the
effort given the right prop and plane size / weight. Kamtechnik ruled the day
with two key parts.

Once you start mods to the engine folks write if off as mystical magic / cheats for speed.
All the same at some point I want to increase timing to evaluate the differences.
At 160° the NV should still be quite tame if the intake is not over bored. I may add
a pressure tap to the pipe if the venturi gets drilled out.

Thank you for sharing Greg,

Great examples of form and function =  IC candy.
Shame the engines have to be covered up but understandable.

Regarding the .15
I wonder what sort of power out and prop was used. May have a
lower case with bearings too. Bummer part of competition is
everyone minimizes exposure to keep an edge.  Doing a search
nothing came up.

Carl in action going through the motions.

Around 1977 Carl was using an asymmetrical plane already, and going faster than that IIRC. It used a venetian blind for a wing. He crashed it at the Canadian Nat's when the pylon pulled out of the ground. We were all using Rossi .15s, I think he built his own motor from barstock about that time. He was a bit quicker than 140 mph, I was doing around 140 +around 1979, and he was a fair bit better than me.

What's that convert to degrees? (exhaust port window is 0.109" height) 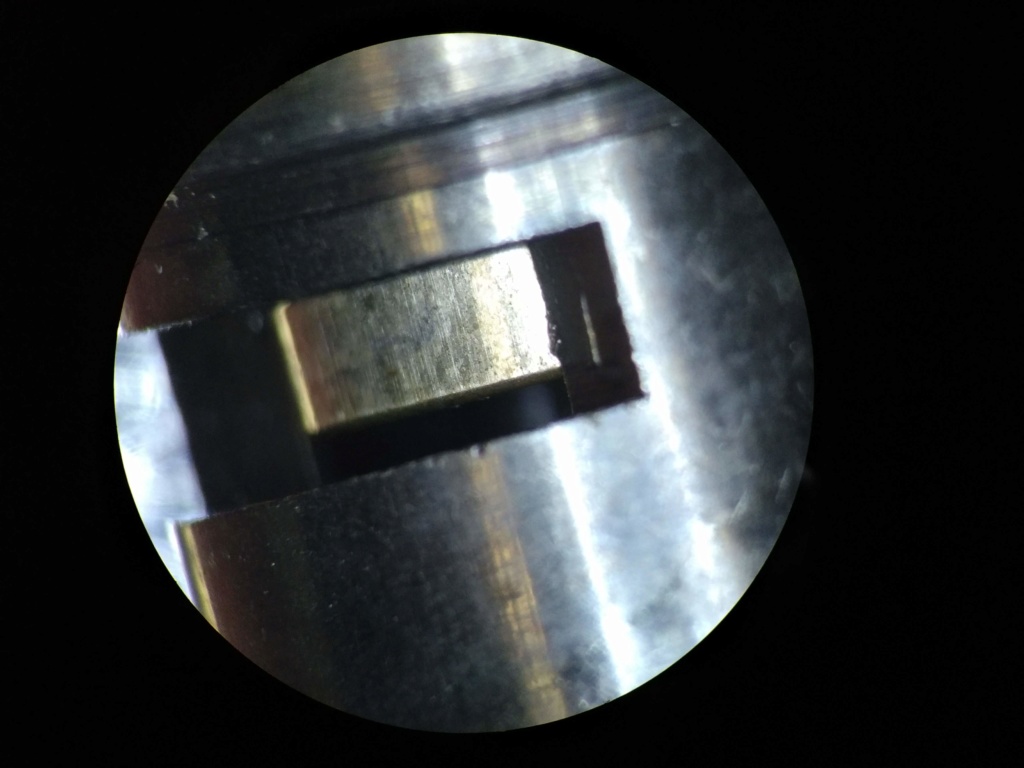 soh cah toa  Probably tangent  opposite adjacent.  I would guess the stroke and your .025"  Then multiply by two for the total duration. Maybe rod length should be in the equation, even this would make me think for more than three minutes. Like I said before. A degree wheel. 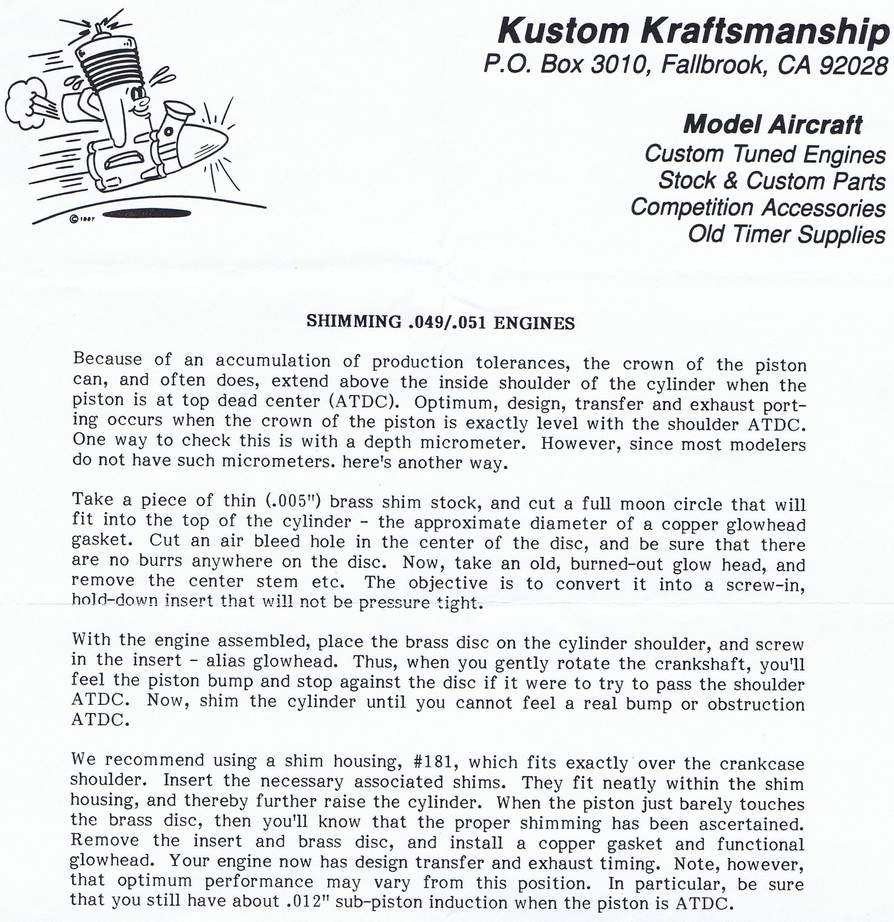 Does ring any bells?

Yes use to abuse amps quite a bit with projects. Started with E projects as a young child
then Cox engines then larger RC projects then Gas then back to modern E projects.
Everything but jets cycling through the power options over the years. 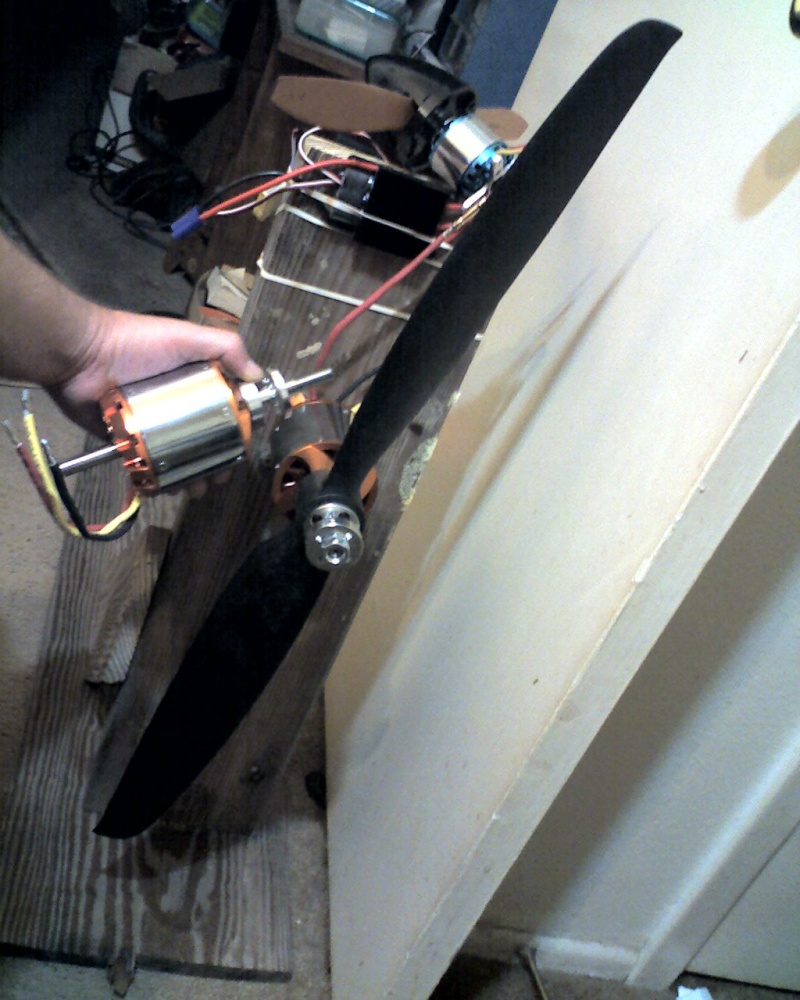