Log in
Search
Latest topics
» maybe fly today
by rsv1cox Today at 10:42 am

» Engine Display Stands - Coming Soon!
by getback Today at 6:41 am

I just noticed that Outerzone has a cad drawn plan for a built-up version of the Ace Foam Wing. Could be helpful for all those plans that call for the discontinued foam wings.

That is great! Look like they have included a downloadable CAD file also. Love those guys.

Dang I cannot find my links to one or more folks who hot wire cut both the tapered and constant chord Ace wing panels....one guy actually can scale them up or down

I stuffed it some where for future use, as I still have several sets of the molded ACE originals

I think I found it on RCG in Balsa builders, Control line, or more likely the 1/2a section

The last two 1/2a built up balsa wings got too fiddly for my old eyes and fingers...

I love foam wings even if they are a tad heavier... hell I even have a set of foam cores here for a Ringmaster bash build some day

There is a fella on Ebay cutting "repro" Ace foam wings. They are pretty nicely made too. Yes, hot wire out of bead foam, not injection molded like the originals. I have not built with a set yet, but bought 2 of both types.

He also has tapered cores, $10 plus shipping. Since he does custom cutting tells me he can probably upscale and downscale. There are others.
I've never shopped from him or other core cutters because I don't have a need yet, so again YMMV.

The true beauty of the Ace wing cores...molded OR cut... an infinite variety of 1/2a models from .010 to .074 can be bashed with full fuse or profile or just flying wing designs

He also has tapered cores, $10 plus shipping. Since he does custom cutting tells me he can probably upscale and downscale. There are others.
I've never shopped from him or other core cutters because I don't have a need yet, so again YMMV.

Yes, this is the seller.

fredvon4 wrote:The true beauty of the Ace wing cores...molded OR cut... an infinite variety of 1/2a models from .010 to .074 can be bashed with full fuse or profile or just flying wing designs

I've got some original Ace cores.. and as you know; my "Phreds's Phault" 50% scale VooDoo is being made from one. 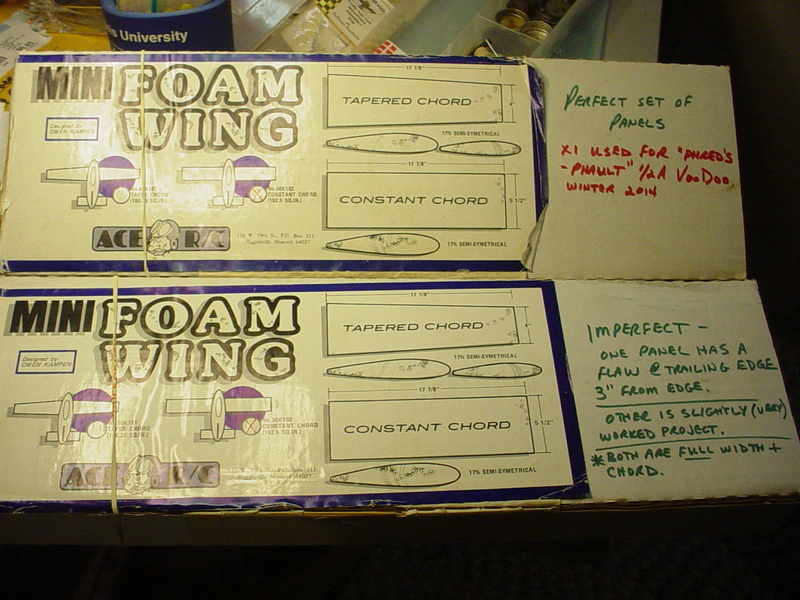 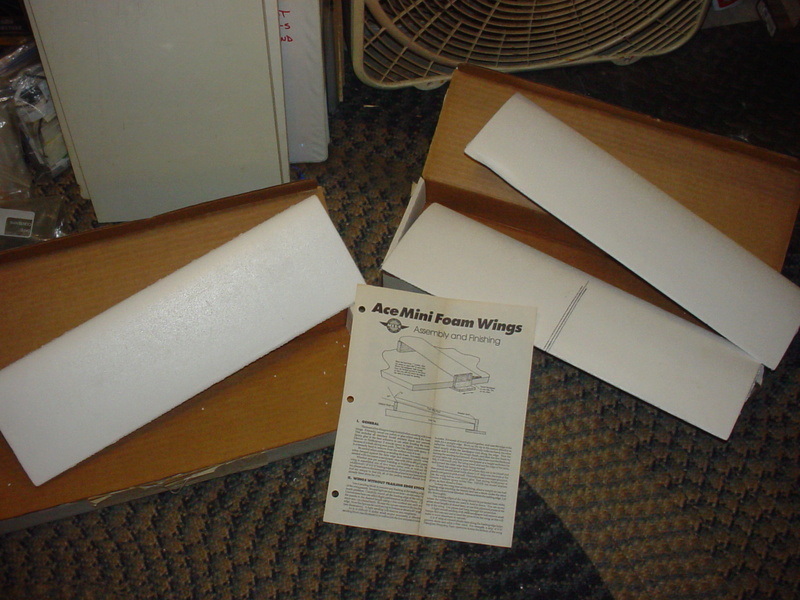 This was "after" I bought Ace's "All-Star Bipe".. an RC model that is still NIB.. 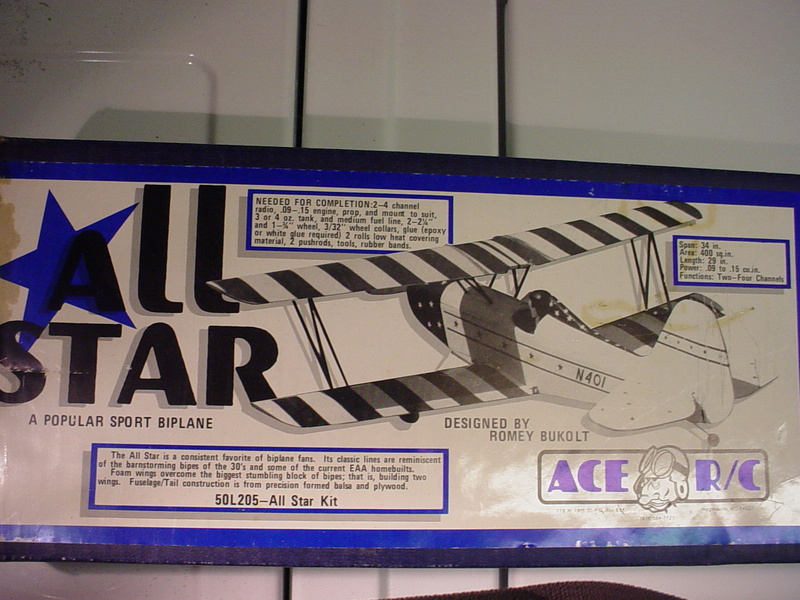 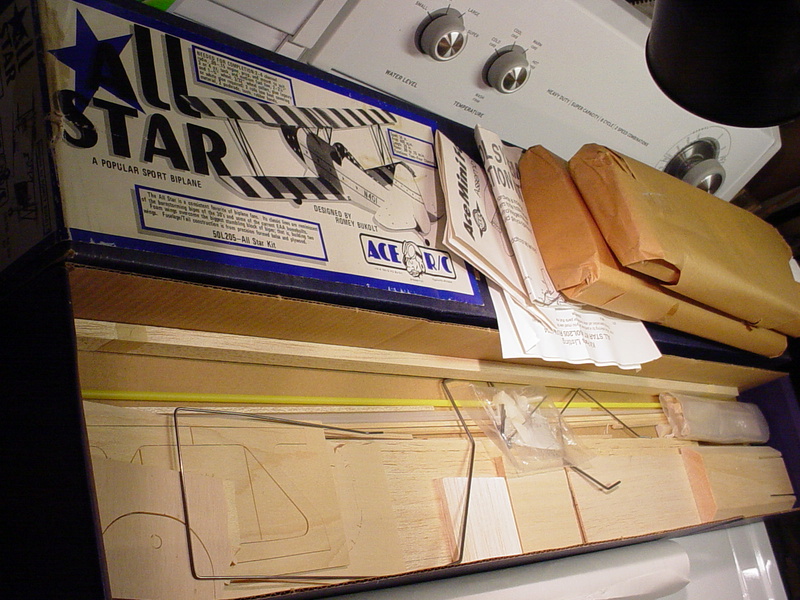 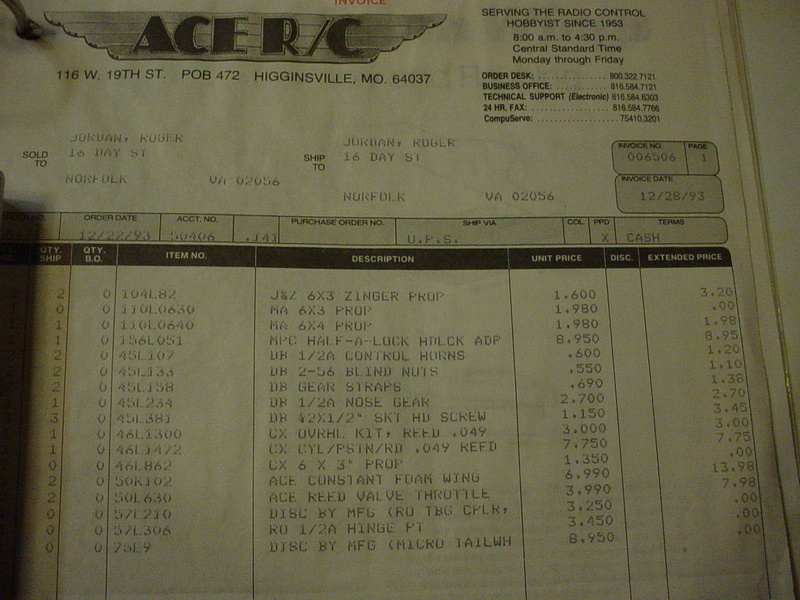 Ace had lots of goodies for 1/2A flying!

The original cores were molded and were somewhat heavier than the later manufactured cut cores. I believe when Thunder Tiger bought out ACE was when they transitioned to cutting.  Cutting cores is not difficult, but you do need an initial investment in a power source and bow.  Both can be built relatively quickly and for little money, but having a power source that can be finely tuned to the needed heat level makes things easier. I've built both AC and DC power supplies and prefer the DC version --- some cores cut with AC may have a wavy surface possibly due to induced AC harmonics.  AC bows also will hum at times!!

The NACA 2415 airfoil is nicely behaved and a good performer, but probably a little thick.  I suspect it was chosen both for its performance and because the foam wing needed a bit more thickness for structural integrity.  If I were to build an all balsa wing I would probably use a 2413 instead since it's a little less "draggy".  Constant chord wings are simple to build and be cobbled up on freezer paper with a few alignment lines.  The double taper wing shown in the aforementioned plans is more problematic and needs either TE tabs or alignment tubes.  While nicely drawn, the construction could be simplified --- I'm a big fan of the KISS approach.

Owen Kampen was a major contributor to 1/2A designs in the late 60's and early 70's and many of his plans were developed around the ACE wing.  If you're curious, search Outerzone for Kampen; there are more than 20 plans listed.

If you like building and experimenting, you might want to look into getting a copy of the Profili software (Profili2.com).  Cost is 25 euros for the base version (much less when I bought mine), but it is one of the best airfoil generating routines I've seen.

Attached are a couple of pics, one of a simple constant chord (Hershey bar) wing and my DC control for temperature adjustment. 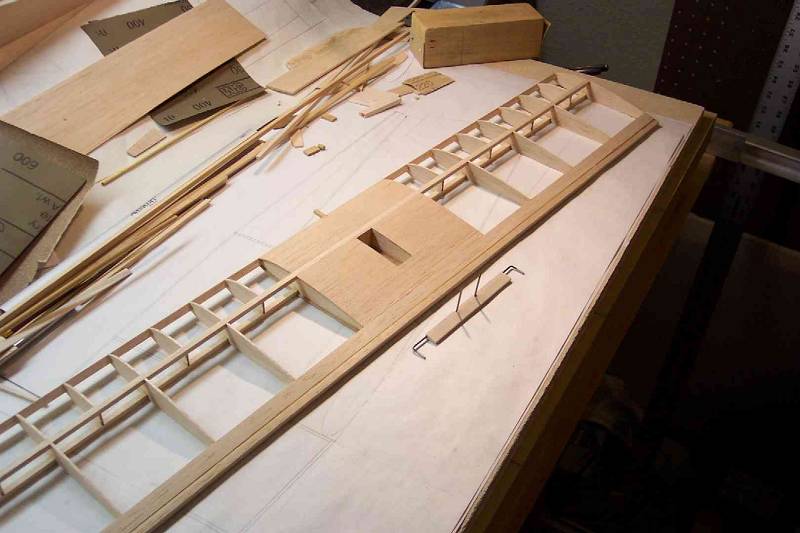 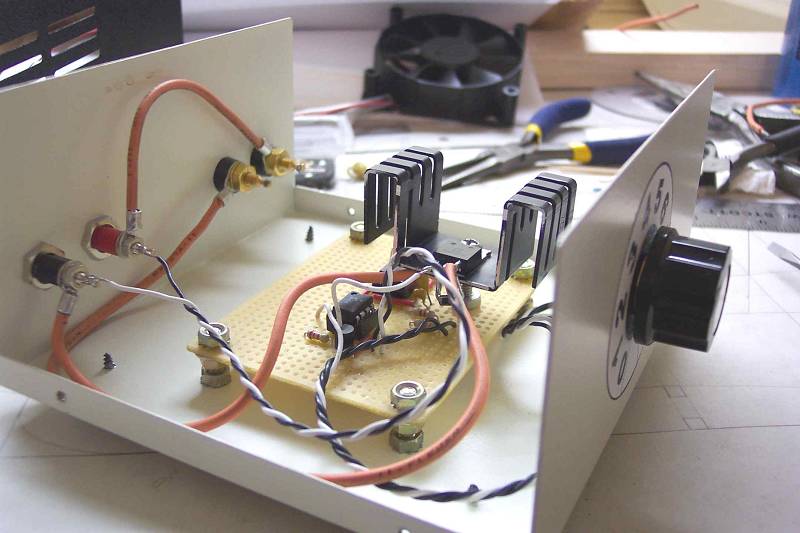 Just like Roddie I have still an unused set of Ace Constant Chord wings purchased 35 years ago. Sterling Minnie Mambo would be an ideal candidate with proper wing saddle changes for the under airfoil, as wing is exactly the same width as the Ace. 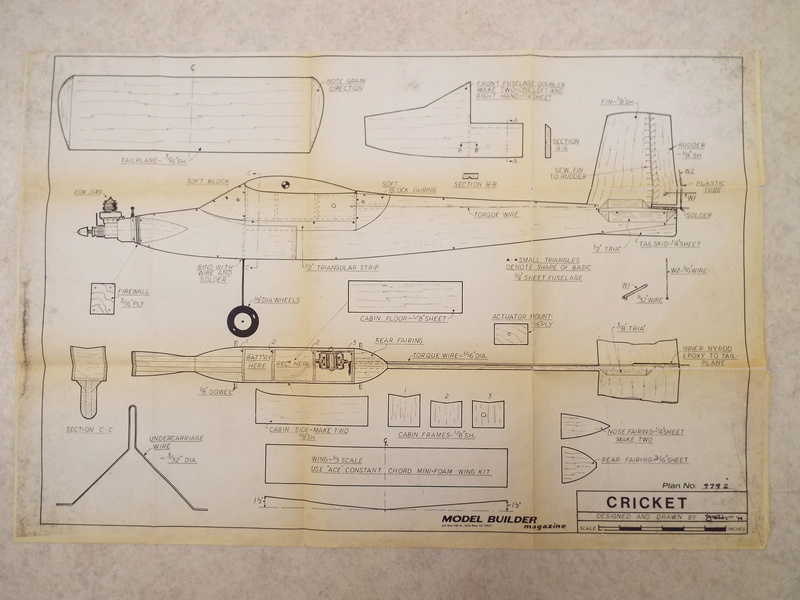 Check out Balsa Workbench (Google him).  He as a laser cut built up wing for and Ace foam replacement.  They go for $10.  The owner is Rob and he is a regular poster on the RC Groups Forum.

Thanks, I bookmarked his page, has a lot of interesting short kits and the Ace wing built up replacement as you pointed out.

Yea, Balsa Workbench is a great place to deal with. I have several kits from him. He will also cut just about any kit you want. His shipping is cheap, well packed, and he is quick to cut and ship. His name is Rob and he spends a lot of time on the RC Groups forum.

The All-Star bipe is really a fun plane, i started with a tee dee and quickly went to a Fuji .099 with throttle, big difference. 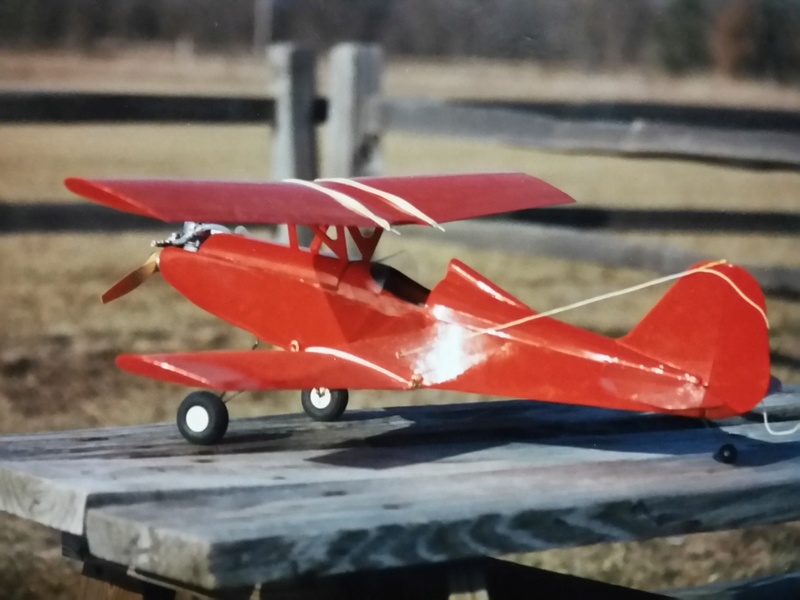