» Cox Black Widow airplane and Dolly Parton
by rsv1cox Today at 7:44 am

» New guy here with a few questions
by Gordinir8 Today at 5:22 am

» Motor Starting Better One Way Than Another
by Iceberg Today at 2:22 am

» Do Killer Bee back Plates sold onlne give better perf?
by RknRusty Today at 2:12 am

» music vids.. some of your favorites
by GallopingGhostler Yesterday at 5:56 pm

New thread.. because I didn't want the original "Storm Damage" title to mislead other readers with the current hurricane Irma thread.

The new shed is being finished-up. The builders have been here sporadically over the last several weeks. It took some time to get permitting straightened out with the Town (according to the job-Supervisor..) nonetheless.. once they started building; things went quickly.. weather-permitting. We had a good share of damp weather that held things up. 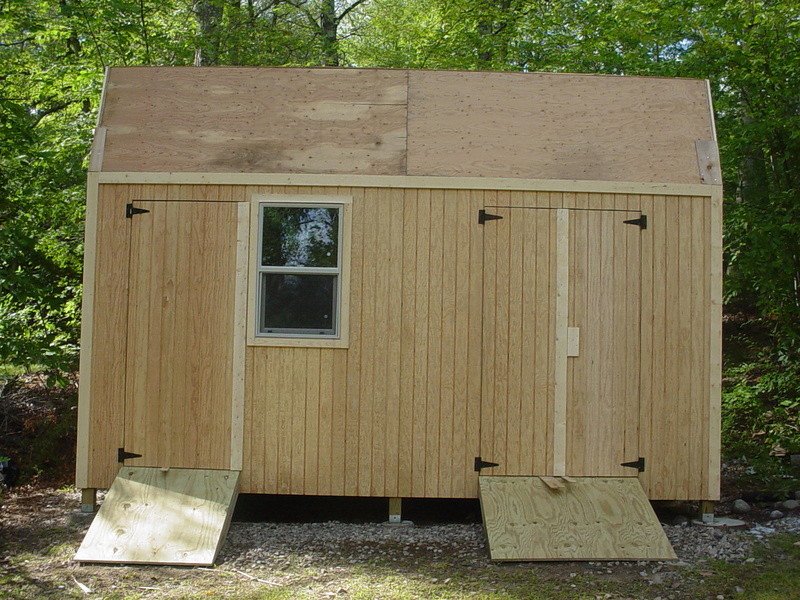 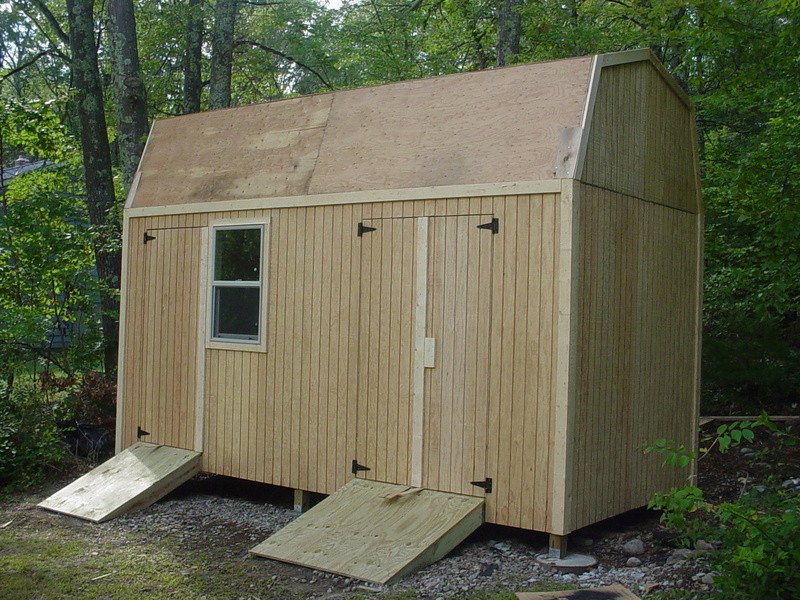 ............ That's going to be an issue. This new structure' was built about 6-8" higher than the old one, for better air-circulation beneath the floor. That's good.. but the ramps were not extended to match the original angle.. and they're STEEP!!!! I'm going to speak with the contractor about omitting the ramp on the left side; in place of a single step.. or "two steps".. as code requires. As far as the right-side (with the double-door).... I doubt I'll be able to get my snow-thrower "into" the shed, with a ramp-angle so steep. That ramp needs to be elongated by at least a few feet.

Here's a couple of photos of the original shed sitting lower to the ground.. 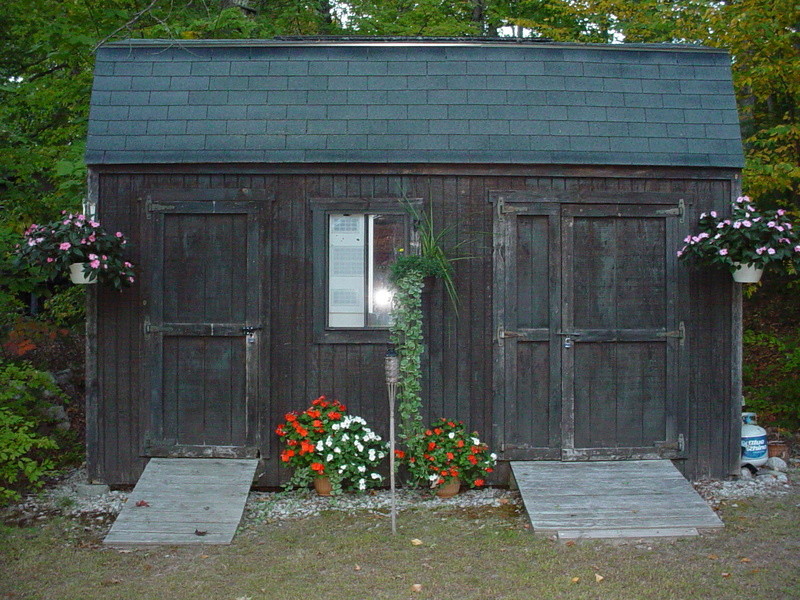 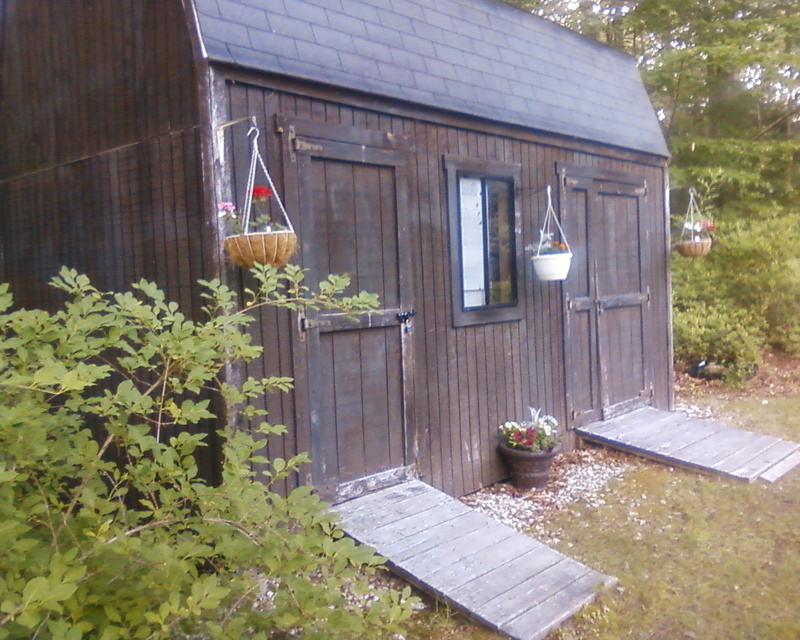 Today the builders are shingling the roof. I thought that they would "paint/stain" prior to this step.. but I'm not real knowledgeable with building-construction.

The shed looks nice, just as the original did.

The ramps do look steep, and plywood may get slippery when wet, especially with the grain running lengthwise. It would be good to make them longer and also they might be better if they were made of boards like the previous ones. Boards installed crosswise and with maybe 1/4" gaps would be less slippery. Just my two cents...

It is definitely good to have the floor off the ground and to have gravel underneath too, helps to prevent mold and rot.

My shed (about 11 by 11 ft) is tilted back about 8" as there is practically no floor structure nor foundation, just a couple of cinderblocks under each corner. I'll need to jack it up maybe a foot or so, build a decent floor and a better foundation. I am kind of wishing that one of the large pine trees around would fall on it so I could get rid of it and build a decent one

The only unique item in there is my beloved old '73 Honda CB125, other stuff is easy to replace if needed.

Obviously on Ice that steep is no good

Looks like plenty of room for much longer ramp

You probably already know to paint with sand/grit or at least put down the stair tread anti slip stick on strips...yes, worthless under Ice ---but good for rainy wet ramps

Thanks Kari and Phred for commenting. The "Super" showed up today just after lunch-time.. and I went out to speak with him regarding the ramps. I wasn't a "prick" about it...

This has been my only concern thus far. He was good about it... and responded with the "lip-service" I expected as a customer. They're going to install "cross-slats" on both ramps for added traction/slip-prevention in wet/Wintery-weather. I left it at that. If I have trouble this Winter.. I'll make my own adjustments next Spring.

The shed looks good Roddie, Did they used treated plywood for the ramps?

The ramps appear to be treated , it looks like they split the 4x8 sheet in half yielding two 4's which is why the ramp is so steep. I would be more concerned in regards to the plywood deck being orientated the wrong way. The grain is running parallel to the framing when it would be a lot stronger the other direction. Depending on how heavy your snow blower is, the ply is going to dip and give in between nailers.

Shed looks Nice ,man that is a steep entrance  , I think extending it would bee the best also . Those cross boards can have disadvantages as in holding water / snow / leaves ect. But its your game

Looks like it sits on poured concrete footers with galvanized end caps on the 4X4's. All good, but it lacks the character of the original.

Too bad they didn't center the window, probably because of the interfering load-bearing 4X4. But there are ways around that, double the side studs and install a header and your there. Or better yet plan for the centered window before hand and construct accordingly. Also they didn't frame the doors like the original shed. I'd be on the phone.

rsv1cox wrote:Looks like it sits on poured concrete footers with galvanized end caps on the 4X4's.  All good, but it lacks the character of the original.

Too bad they didn't center the window, probably because of the interfering load-bearing 4X4.  But there are ways around that, double the side studs and install a header and your there.  Or better yet plan for the centered window before hand and construct accordingly.  Also they didn't frame the doors like the original shed.  I'd be on the phone.

Sorry I haven't returned some comments here until now. The day after the last photos I posted.. the shed was completely roofed and painted.. 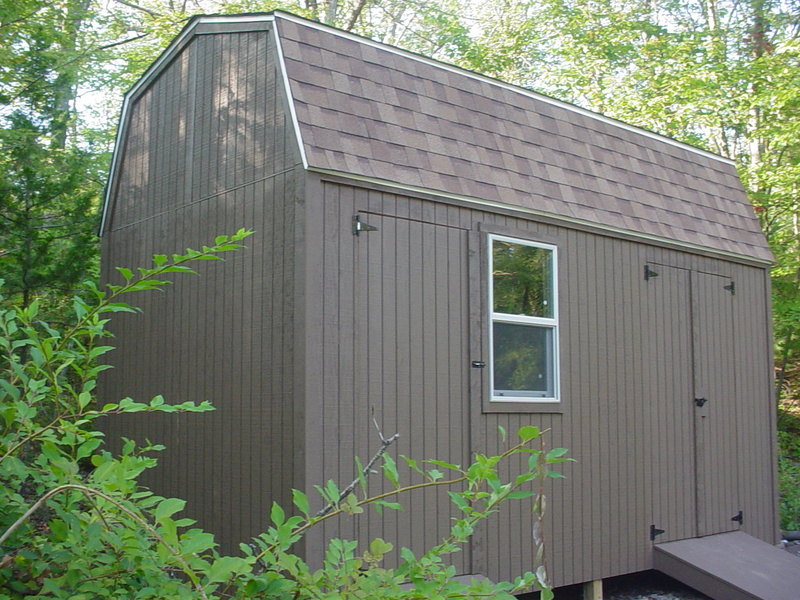 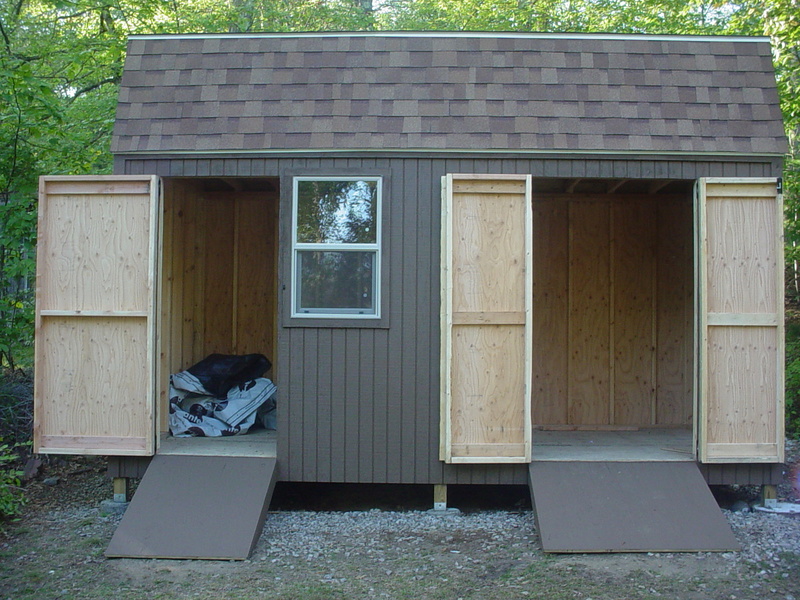 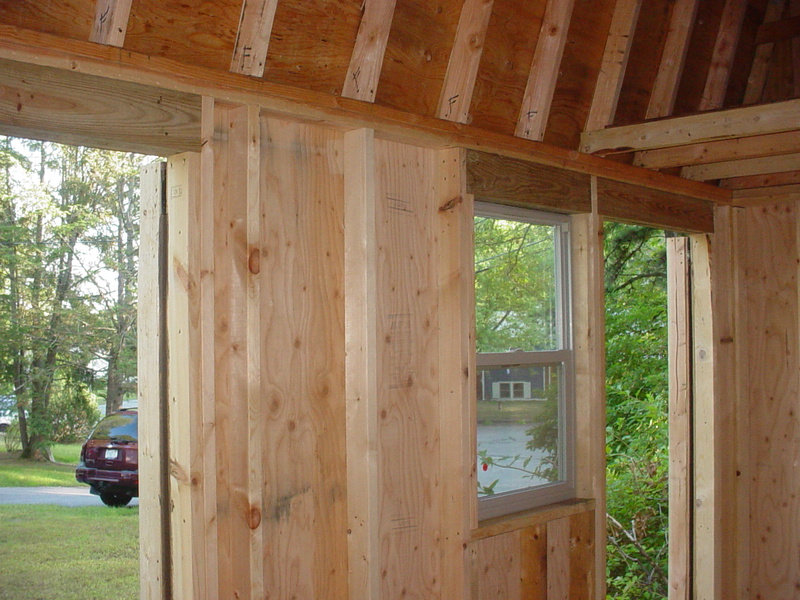 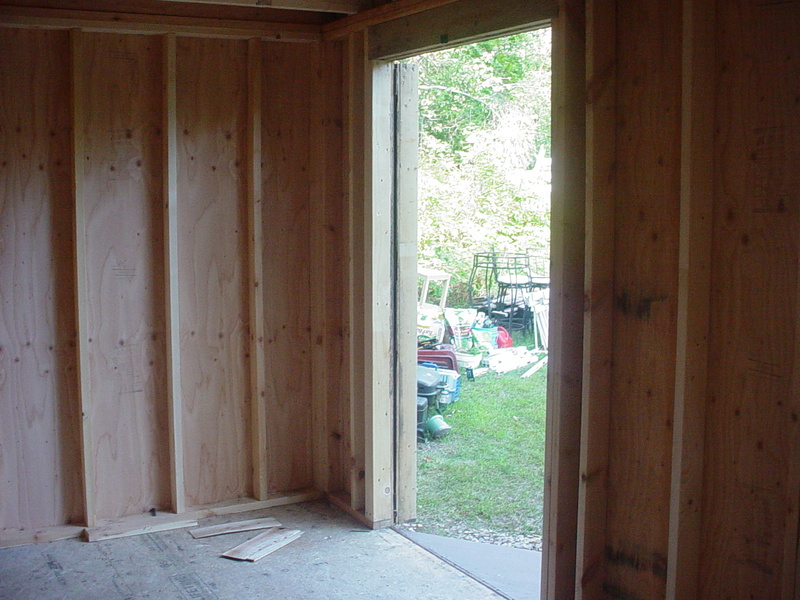 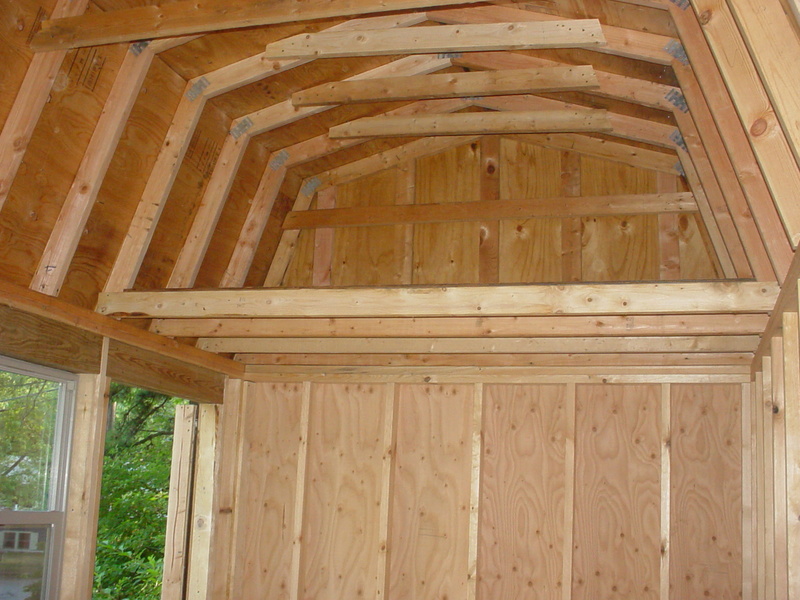 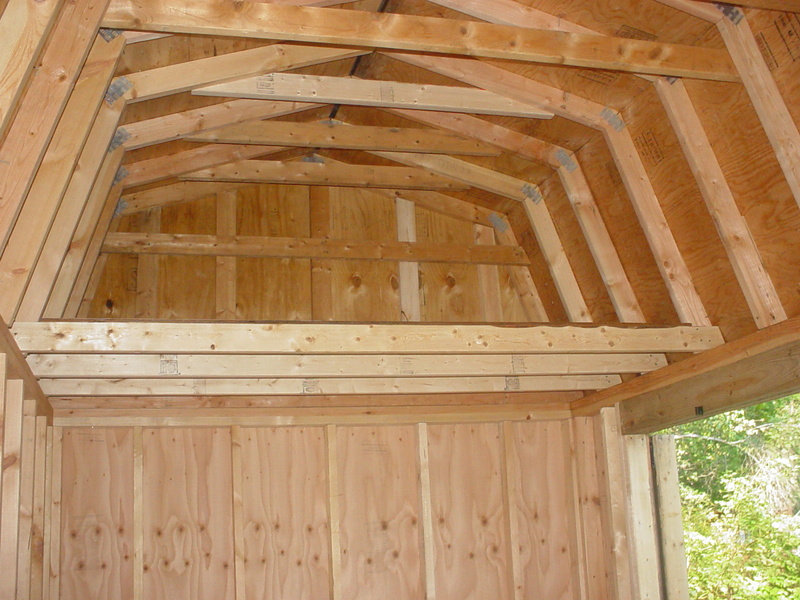 Overall I'm pretty satisfied.. but I have a few gripes; the "steeper ramps" which I mentioned previously.. and the lack of a locking-bolt on the left-hand door.. as it once had. I'd settle for a hinged-hasp.. but shouldn't have to source it myself. My two "keyed-alike" padlocks disappeared too.. Lastly; there was a center loft-section. It only spanned two bays (32").. but it was not rebuilt.. and the gen. contractor says it wasn't there.. but he stated that the new lofts were both extended an extra bay.. which basically makes up the difference. I'm not going to fuss over that. It's actually a better loft-layout than the original was.

The R/H (double-door) ramp will be elongated... rather than tacking-on cross-slats or applying anti-skid material. 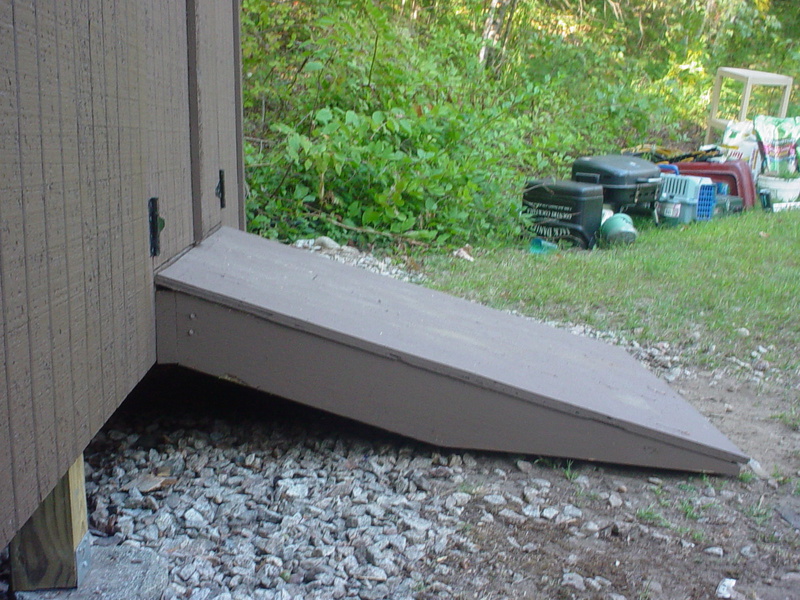 The L/H ramp will be replaced with a step or two-steps as code requires. 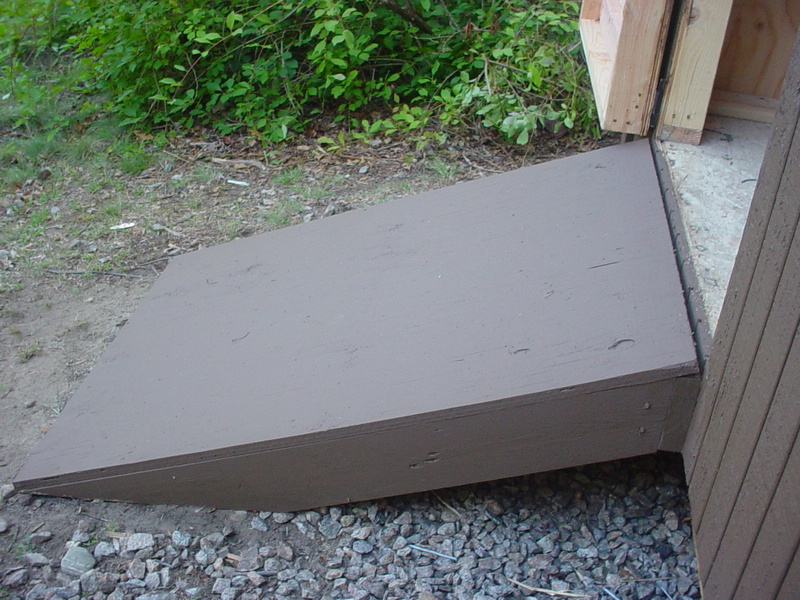 There were some original shelves which I removed.. along with their brackets prior to the demo.. therefor they were not replaced. I wanted to start with a "clean-slate".. regarding shelving/hooks/pegboard-panels.

It would be nice to have the shed electrically hard-wired.. but it's primarily for cold-storage.. and is not insulated.

Hey Roddie, that shed looks great! I hope to see you soon with your models and you enjoying it. In good time, you are ready!

Looks Good Roddie, Is There Loft Storage om Both Sides ?

Yes Joe.. both sides were extended one bay (16") from the original shed's design. This will provide a few more square feet of loft-storage. Most of what "was" in the lofts.. faired pretty well for the last 6 years that we've occupied the property. Mice seem to find their way into the smallest crevices though. Whatever is stored in this shed will have to be subjected to the possibility of rodent-infestation. Garden-tools, lawn-equipment, bicycles and scrap-lumber are what will mostly be stored in there.

Yes Joe.. both sides were extended one bay (16") from the original shed's design. This will provide a few more square feet of loft-storage. Most of what "was" in the lofts.. faired pretty well for the last 6 years that we've occupied the property. Mice seem to find their way into the smallest crevices though. Whatever is stored in this shed will have to be subjected to the possibility of rodent-infestation. Garden-tools, lawn-equipment, bicycles and scrap-lumber are what will mostly be stored in there.

Add a couple 2x4 closer to the middle for lumber storage. That stuff don't need a deck. You can also put the shop lights on them.

pkrankow wrote:
Add a couple 2x4 closer to the middle for lumber storage.  That stuff don't need a deck.  You can also put the shop lights on them.
Phil

That's "sort-of" what ended up happening Phil. As I mentioned previously; the new lofts were "shorter" by one bay each. They now have both been extended two feet.. rather than the 16" that I had originally asked for. I knew this was to be.. because the builder mentioned it to me on the phone before doing the extra work. I didn't correct him.. and I'm glad that I didn't. There is also a new section that connects the two lofts above the front-wall. Loft-access is via an opening above the center of the rear-wall.

Last Tuesday the work was finally completed.. and I signed-off on the job. 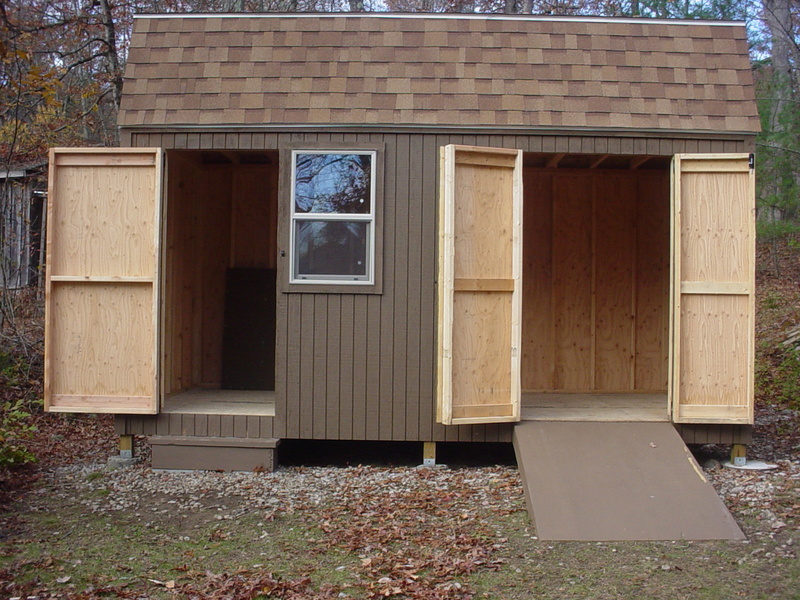 As you can see; there is now a "step" on the left/single-door side, rather than a ramp.. and the right-hand ramp was replaced with a longer one. The original ramps were of better construction; being made with PT 1" x 8" "decking-stock" running horizontally. The new ramp is a single-sheet of 3/4" exterior-grade plywood.. with three angle-cut pieces of 2" x 6" stringers/framework underneath. I have my doubts as to its longevity.. but it "is" new. 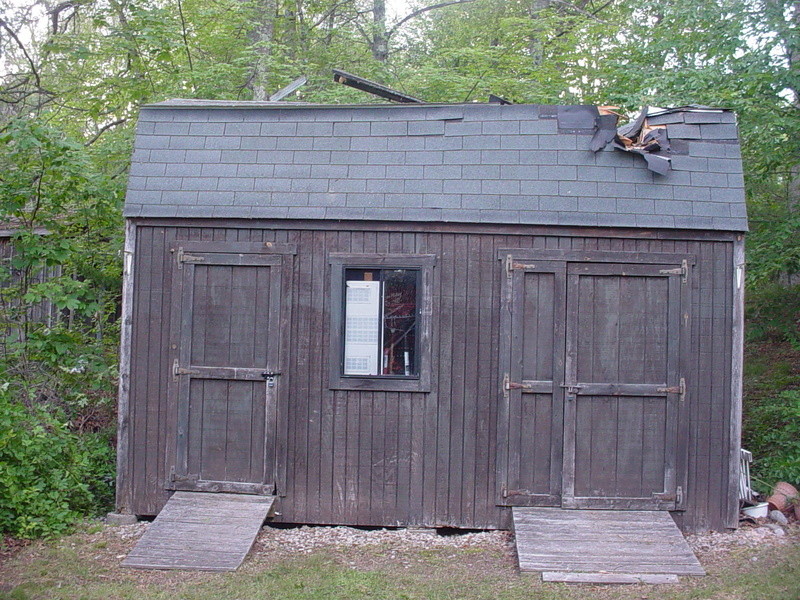 The new doors are also much lighter-weight; basically 2" x 4" box-frames with T-111 faces nailed-on. I didn't complain about that.

Here's some photos of the final loft-construction.. 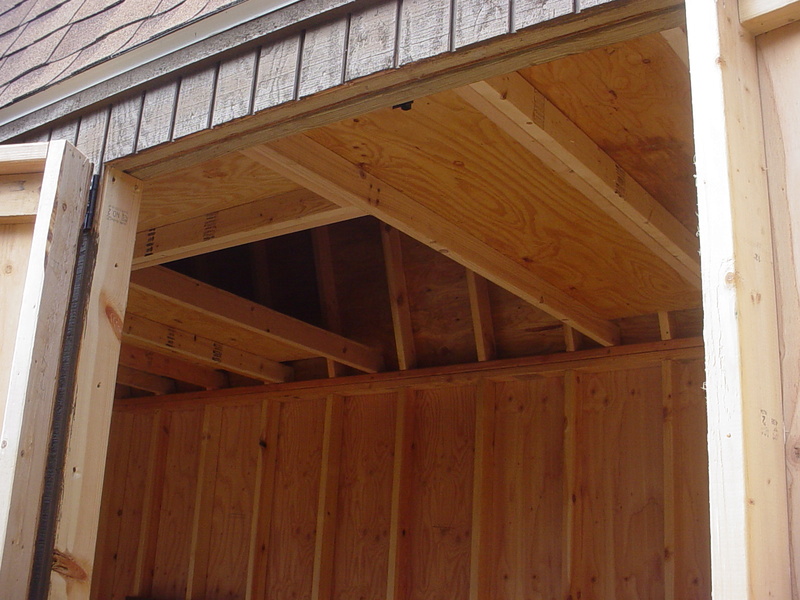 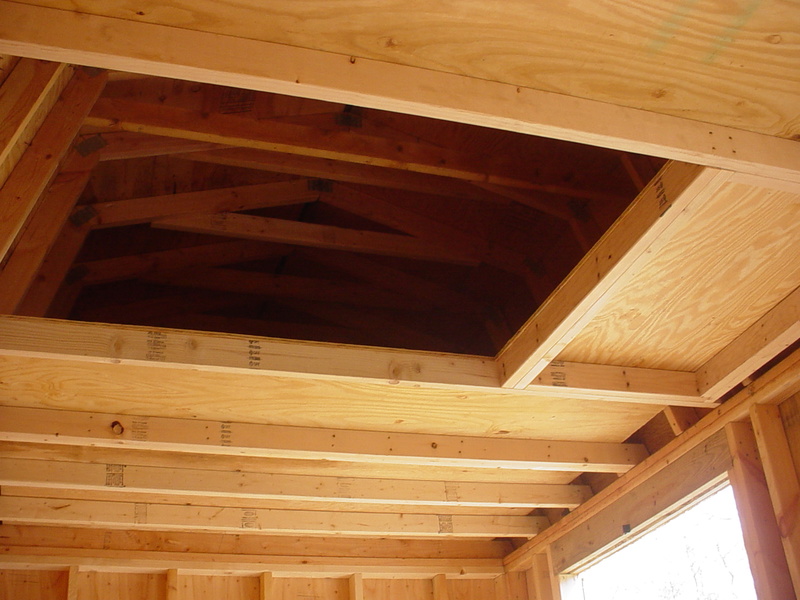 Yesterday I took some of the above photos before preparing the shed for re-occupation. There were a couple of shelves that I needed to reinstall. I'd removed them and their brackets last Summer, prior to the demo... along with some screw-in hangers for our bicycles. There's a lot of CRAP.. in the "Pod"/storage-unit that I should have thrown-out last Summer, before loading it in there.. but I'm a hopeless-hoarder of things. It comes from losing a lot over the course of my life.. I guess. I tend to get "defensive" when Lynne asks; "why are you saving that"?....

Do I ask you why you have 39 pairs of shoes?

BTW.. this shed never had.. and "still" doesn't have electricity..

but It's only 45 feet from the house.. and there's an exterior AC receptacle on the facing-wall. A 50 foot H/D 3-wire stention-cord will provide power for one of those new LED shop-light fixtures.. and any power-tools that I wish to run out there. I want to build a small "paint-booth" (box) with a couple of incandescent-lamps for heat.. so I can paint some models over the Winter-months. Lynne gets migraine headaches from any type of aromatic-solvents.. so painting in the house is not possible.

Looks nice roddie. You should love that loft, more space to store stuff. I wish mine had one. And that ramp....functional for your snow blower and other wheeled devices.

At that, 2 of the 5 out buildings are not wired. ...but maybe some day if just for a friggin light while I look for stuff

In the winter I put a cheap and simple thermostat controlled heater in the wood working shop... no AC in that dust monster...of course this is TEXAS so lows to 20s are rare but we do get a lot of 30s weeks

Keeping all my glues, edge banding, paints, and oil /grease in the tool bearings from freezing is the goal so the thermostat is set to 45F and since I can monitor my power that one shed only adds $5 per month to the winter bill...BTW lower for me than summer bill