If you've got a spare 15cc tank or parts to build one, I'd be glad to compensate ya. This here mochine is almost ready to get it's plumbing sorted. 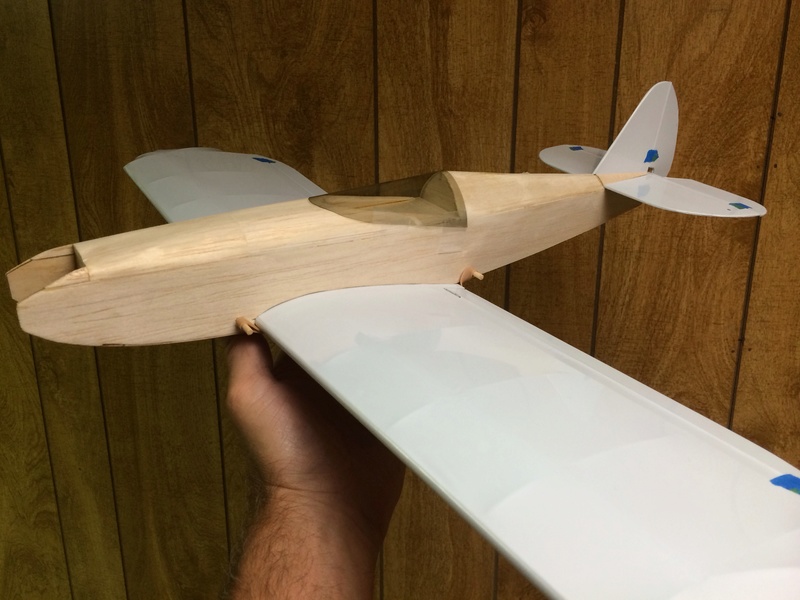 @Tee Bee wrote:If you've got a spare 15cc tank or parts to build one, I'd be glad to compensate ya.  This here mochine is almost ready to get it's plumbing sorted.

Well done, the plane has a racer look with that tinted cowl, what is the empty weight thus far?


Sure can Troy, PM me your address.

One last step I like is some heat shrink around the lip of the bottle and plug.
Insurance against engine vibrations, no chance of migration over time. 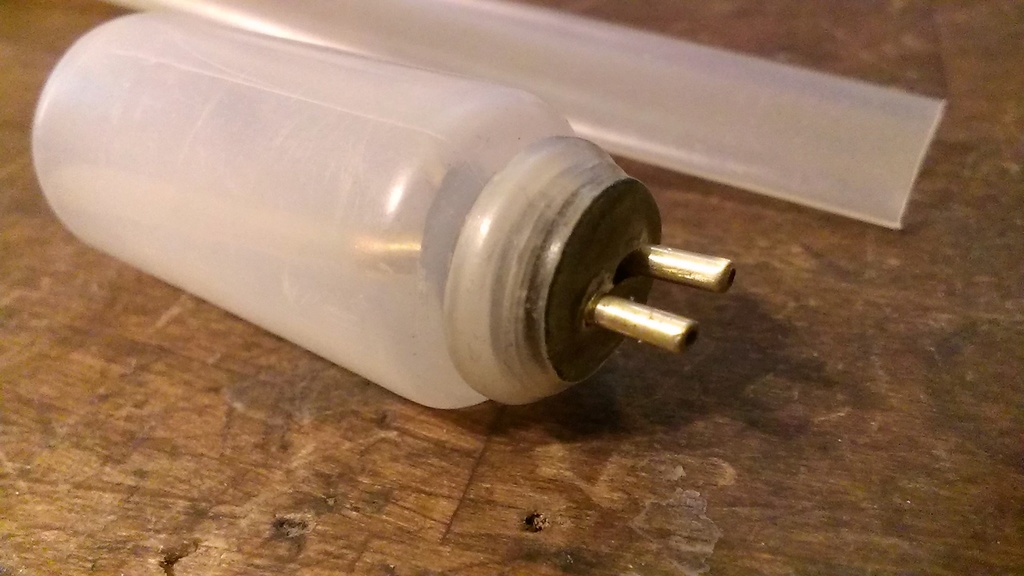 Thanks! I think it has that WWII fighter-turned-Reno racer look. Also reminds me of a little Super Sportster.

I'll try to weigh it as soon as I can. I don't have a set of small scales here. I used to have access to a set in a lab at my previous place of employment but I changed departments last year. I'll swing by there and weigh it when I can. It's surely not light enough for you guys with all of it's balsa layering and filling but I bet it will fly ok.

The heat shrink is a nice touch on the tank. I'm starting to get more excited about this little sport plane and think it's going to be a ball to fly.


Multi color rubber band assortment bag can blend with covering or stand out such as the following types:
Neon colors tested works good dia. enough to go up and back on the dowels:
https://www.ebay.com/itm/24-Assorted-117B-Neon-Rubber-Bands-in-Pink-Orange-Blue-Green-7-x-1-8-/262597206973?hash=item3d240363bd:g:VZEAAOSwd4tTw1Ce

Thanks for the links. Don't worry. I won't be using those thick #64 bands on this bird. Just for ease of loose fit for mockup. I usually keep a bag of those multi-colors and sizes in my box. I like those neons and might have to order some. I was going to make the wing a bolt-on job but got lazy. The carbon tube dowel idea is cool. Never considered that. 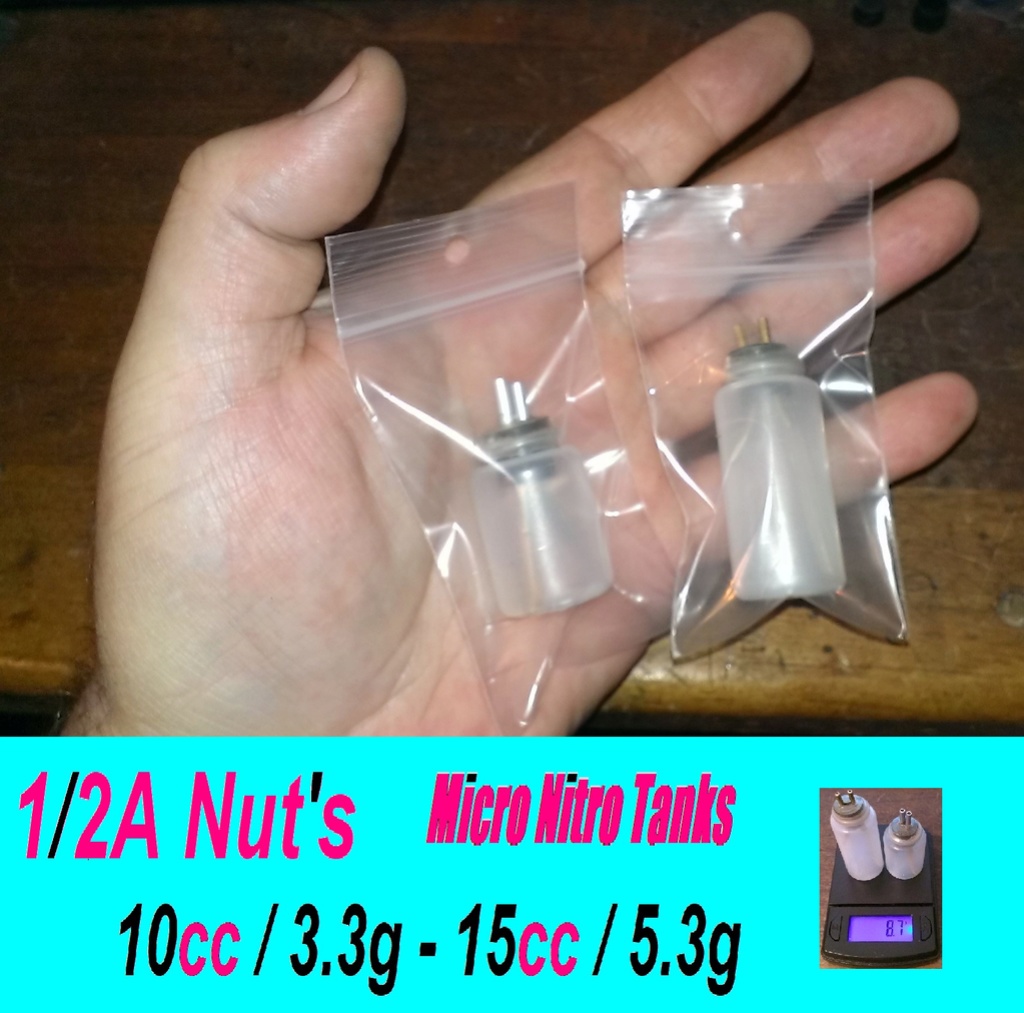 Those look great!  Nice job.  Only a tiny TD enthusiast would get so excited about something like that, eh?

Lol yes and these little one's will work great for Reedies too.
Typical 8cc tank on a .049 reed engine is just not enough run
time for RC. Of course there is the 1oz tank 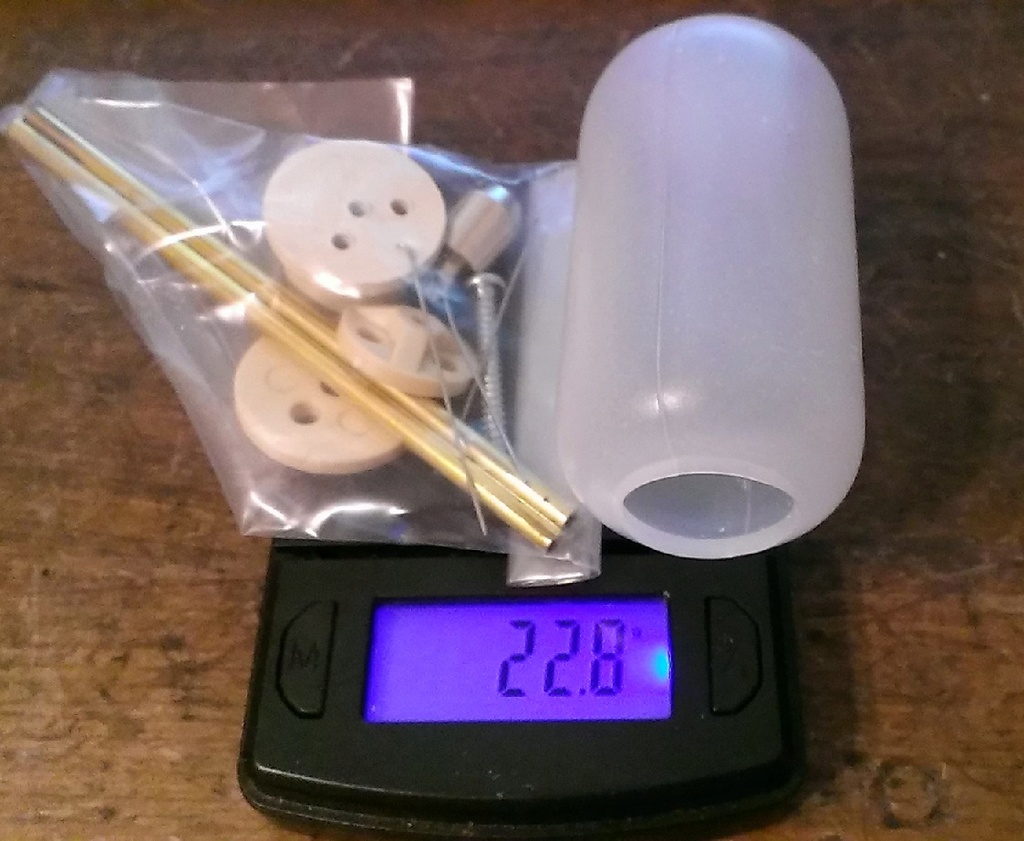 Seems some of my .049 planes ended up needing a bit of nose ballast even with those heavy Sullivans. The Minnie Mambo comes to mind. It was already very heavy and then needed more lead after shoehorning in a 2oz Sullivan to keep the Surestart running for about 15 mins.

Funny story: When I went to maiden the Minnie Mambo a few years back, it was very unstable at the handaunch and flew very tailheavy even though it balanced on the spar. I scrounged around my boxes at the field for some suitable nose ballast and went on to fly it a lot that day. Several years later, I was looking for my .09 piston reset tool in My Cox tool box and couldn't find it. I intended to buy another one for the next couple of years but it kept slipping my mind when I was shopping online for model stuff. Earlier this year, I tore into the Minnie Mambo to make it ready for service again. Lo and behold, inside the fuel compartment hatch was my .09 piston reset tool that I had hurriedly installed as a "temporary" ballast years before. It's now back in it's proper compartment in my Cox tool box and the MM is putting around with lead in her nose.

Hah good save on that, not sure how easy it is to source an .09 reset tool these days.

Sometimes even when on the spar a flat bottom wing with a bit of incidence
is going to need more nose weight just too much lift happening. The only other
trick in lieu of adding weight is to have a airfoiled horizontal stab to lift the tail up.

15 mins good gravy that's a lot of run time for a reedy screaming with no throttle lol.
I looked at the design makes be wonder if the original had a flat bottom airfoil on the
rear stab. The kit maker may have cut a corner perhaps. Could save some weight if redone.

I seem to remember building a symmetrical airfoil HS with a tiny chord elevator. It took all I had not to make the elevator larger but I built it as designed and it works ok. It weighs in around 23oz! Flies with an intake throttled Surestart and 6x3 rubber ducky. I set it up for long lazy flights around the pattern at SMALL. Works great for that, sometimes passing the transmitter off to friends as it it spends 15-20 mins puttering around at half throttle. With high rates on the rudder, it spins like there is no tomorrow, then slowly crawls back upward. Kim Stricker is bringing his old "Little Traveler" MM with the same engine setup next year and we plan to do some very loose formation flying with them. Should be a hoot. I think his has a 4oz tank!!!

4oz wow now that is some payload right there

He is going to get an hour on the sticks!

A trick I use to get by with small tail feathers is to airfoil them and use a longer tail moment. 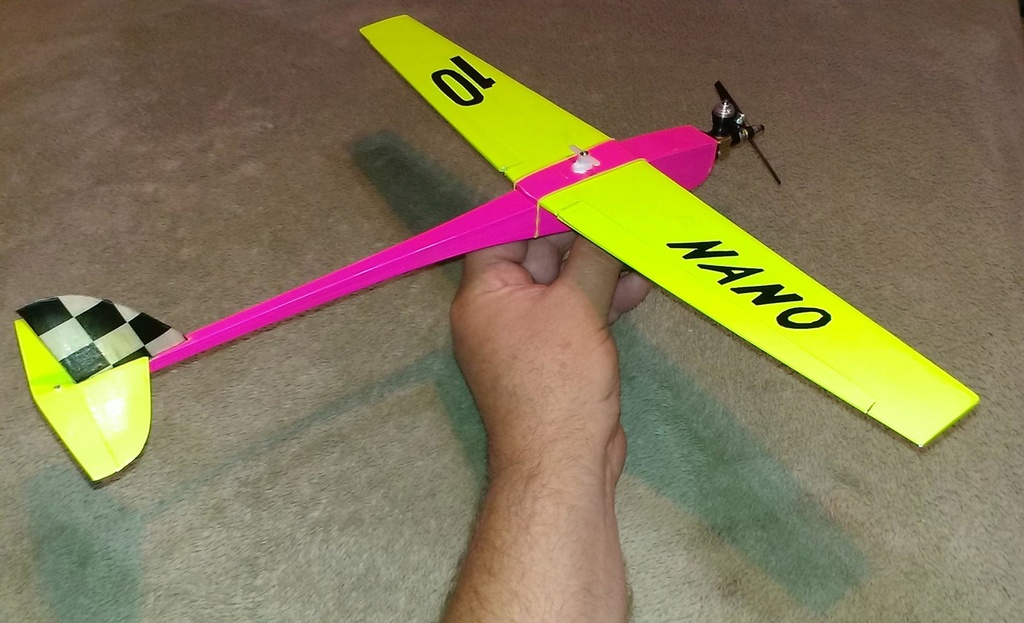 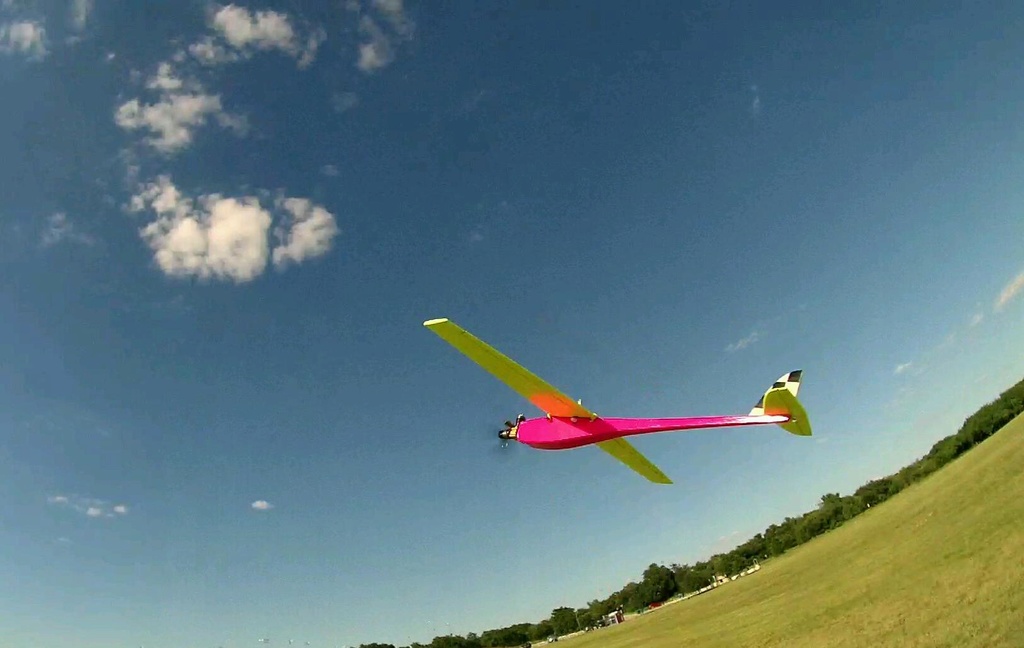 Minnie Mambos are the polar opposite approach to the NANO. Slow-going old school classics. Kim's was set up that way to make a cross country flight which raised money for St. Jude's Hospital. He flew it from the bed of a friend's pickup truck and successfully landed it in his uncle's yard. He's got a vid of the adventure on the tube. As for my Cox planes, none of them have ever been anywhere near as fast as what you do. Mine are just sport flyers. I have a couple of fairly quick electric foamies that are 100mph or so, an E-Flite Rare Bear and a 38" span P-40B with retracts that runs on 4S. That's another subject, though.

The bottle tanks look good Brad , great weight saver there and cheap to obtain . I dont recall ever running a sure start engine but have heard alot of good stuff about them. I like the little sporty plane you have there Troy , nice and sleek with caricature.

Thanks, getback. It's a product of Steve "skaliwag" Adams' imagination. When I described some basic ideas that I wanted in a TD .020 size, he drew it up in dimensions that should work. I'm now taking it from 2D to 3D.

. After all this dialogue, I will be using one of Brad's little bottle tanks instead of the shiny new Brodak unit I just purchased. I'll try to weigh them both side by side for comparison when I get that far. So far, it looks like the plane is going to end up tailheavy and will need more ballast up front. I won't know for sure until I get further along. I'm having servo and pushrod fitment/clearance issues in the fuse. Might have to put the tail servos behind the wing with another access hatch. That's going to really shift the CG aft if so. In hindsight, I should have installed separate and smaller aileron servos in the wings, making room to move the tail servos up to the leading edge. I may be able to recess them further into the top front of the fuse but would have to be careful to avoid "warts" sticking out the top. :0 Ihad been tinkering with the idea of adding a throttle servo/sleeve but that will complicate things even more. I just need more time to sit, look, measure, and think about it. Such is life.

What are you using for a battery?
Perhaps with the bottle there will be room for the battery up front with the tank?

34.2mm wide battery opposite of the prop torque as shown:

20.9g wire lead is elevated off the table at the end 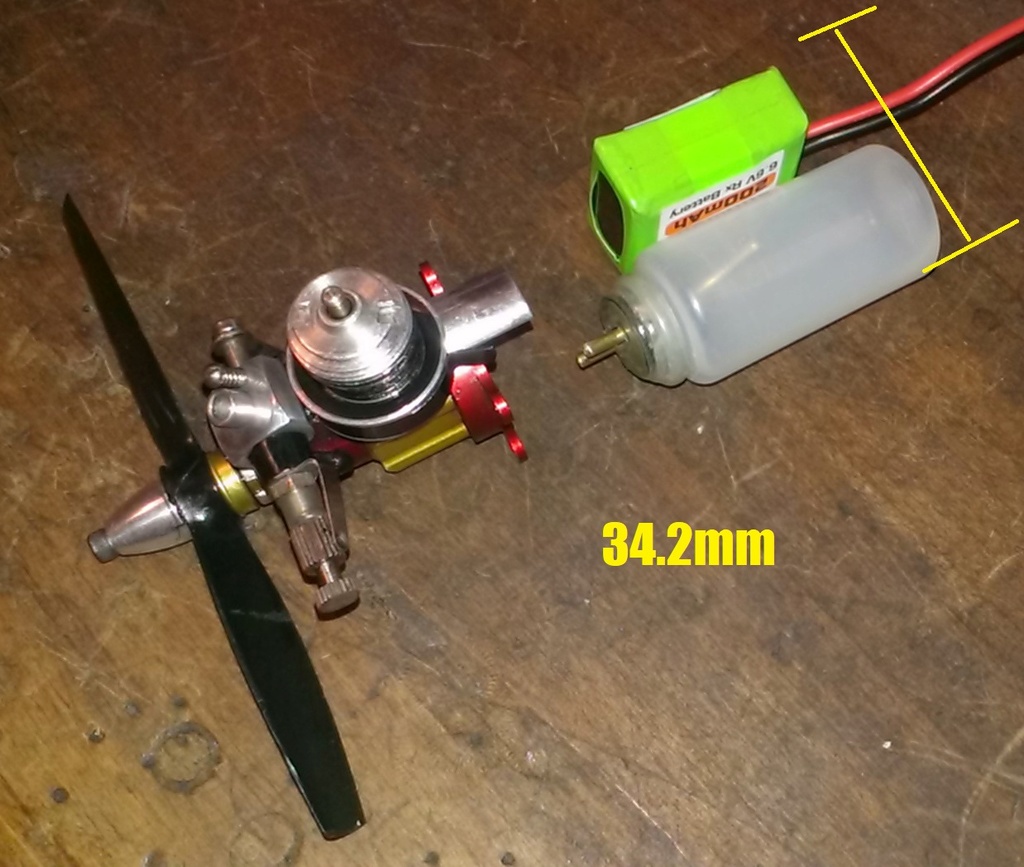 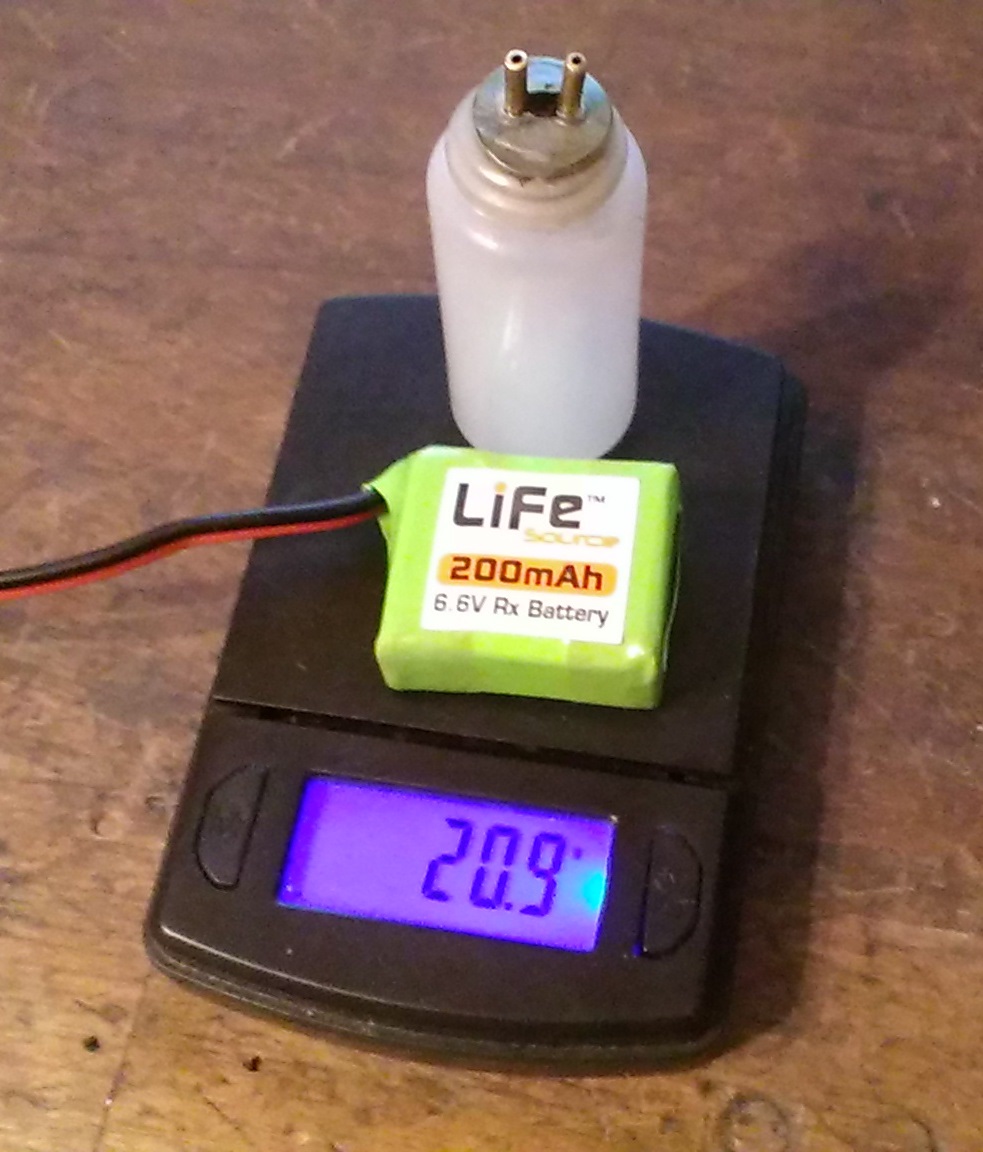 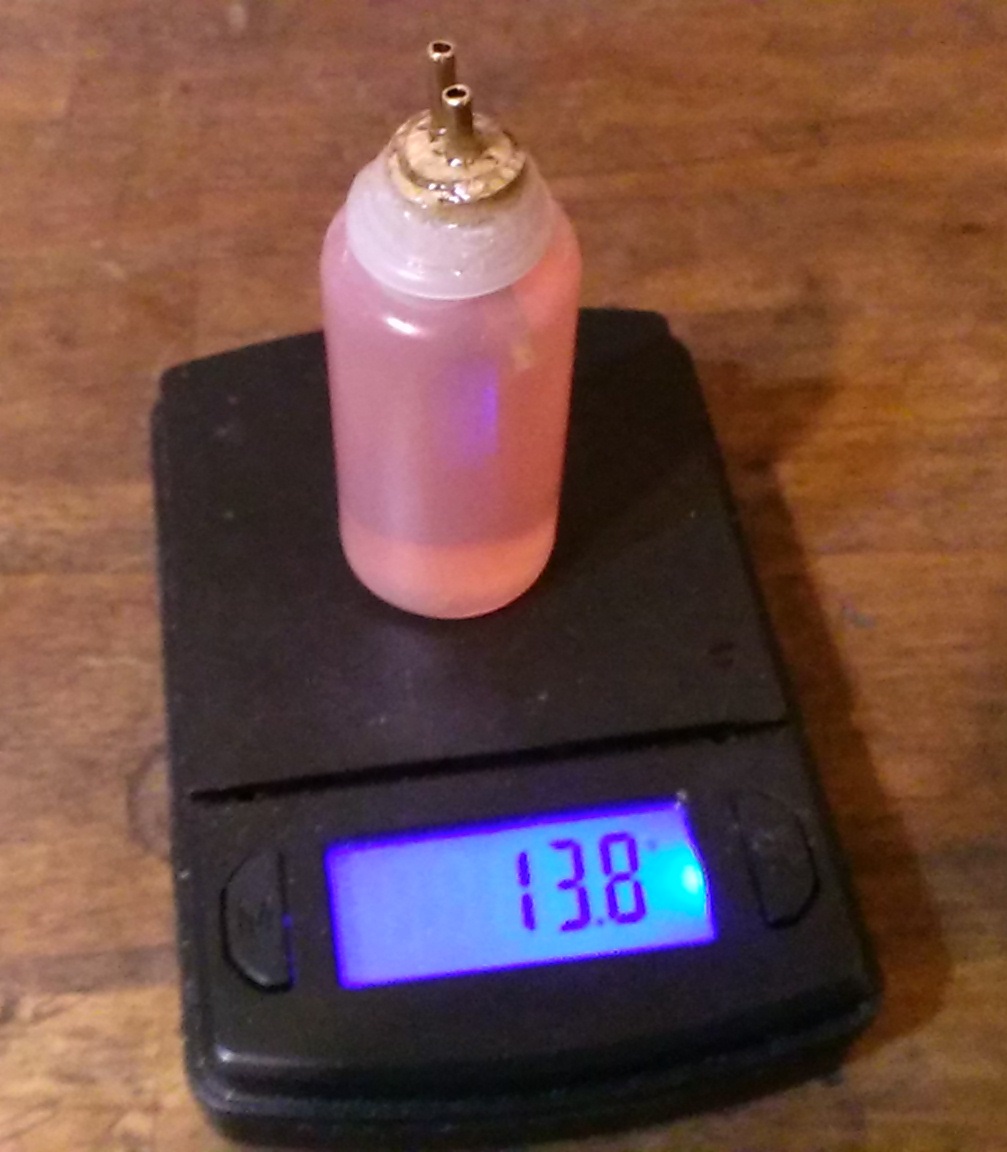 About 30g with battery under that front hatch.

I've got some new 6V 170mah and 400mah packs to experiment with. I was planning all along to put the battery up front. That's how all my other planes "roll" as well. I've got some more building stuff to do and then I will try to gather up all the innerds for mockup, placement, etc. My fitment worries may be unfounded but it sure looks tight in there with those aileron torque rods hogging up the limited space.

Built the other two tanks today your all set! 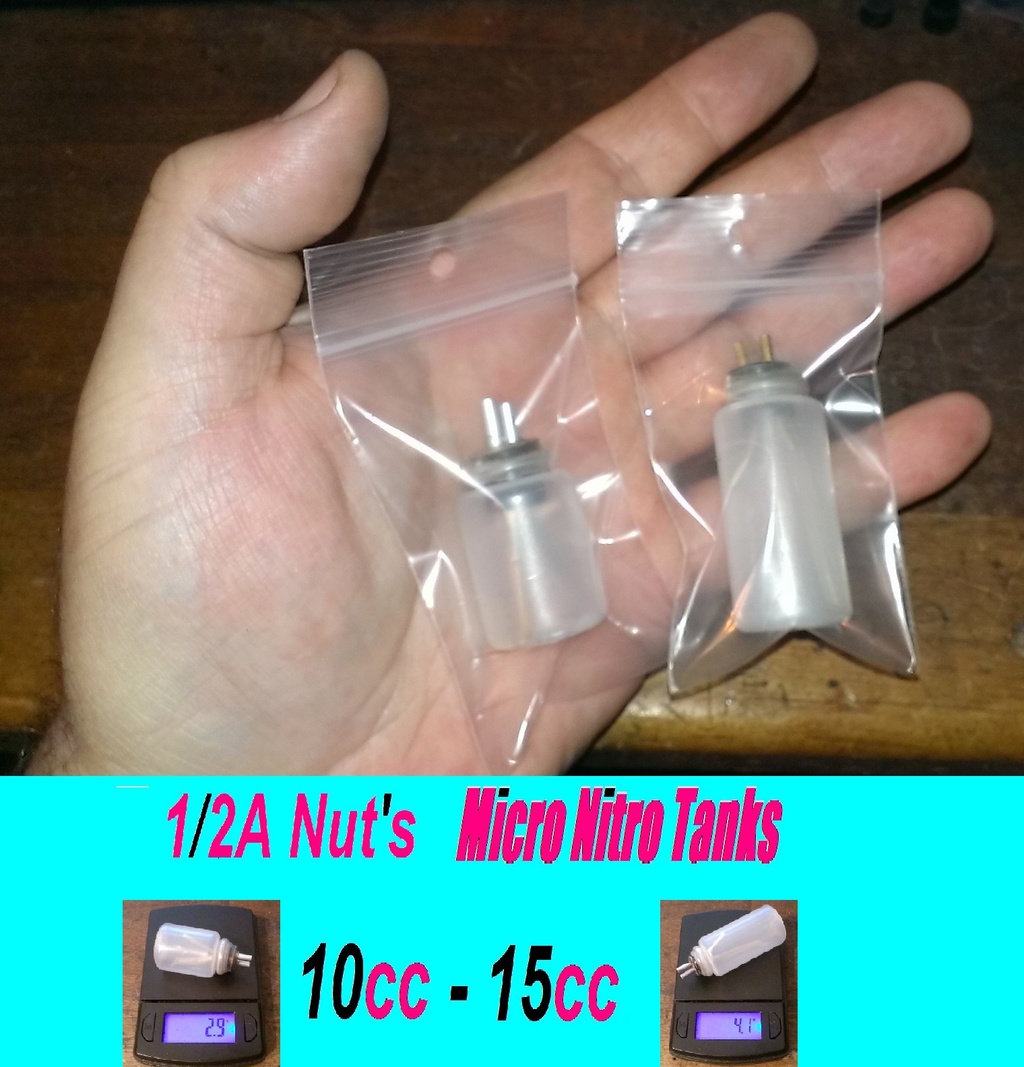 You most welcome enjoy!

Made a tank for my Speedy Reedy project today its a 20cc / 3/4oz
very low weight tank considering the capacity. Should run around
7 mins with a speed propped reed engine and 5 mins if with a thirsty TD. 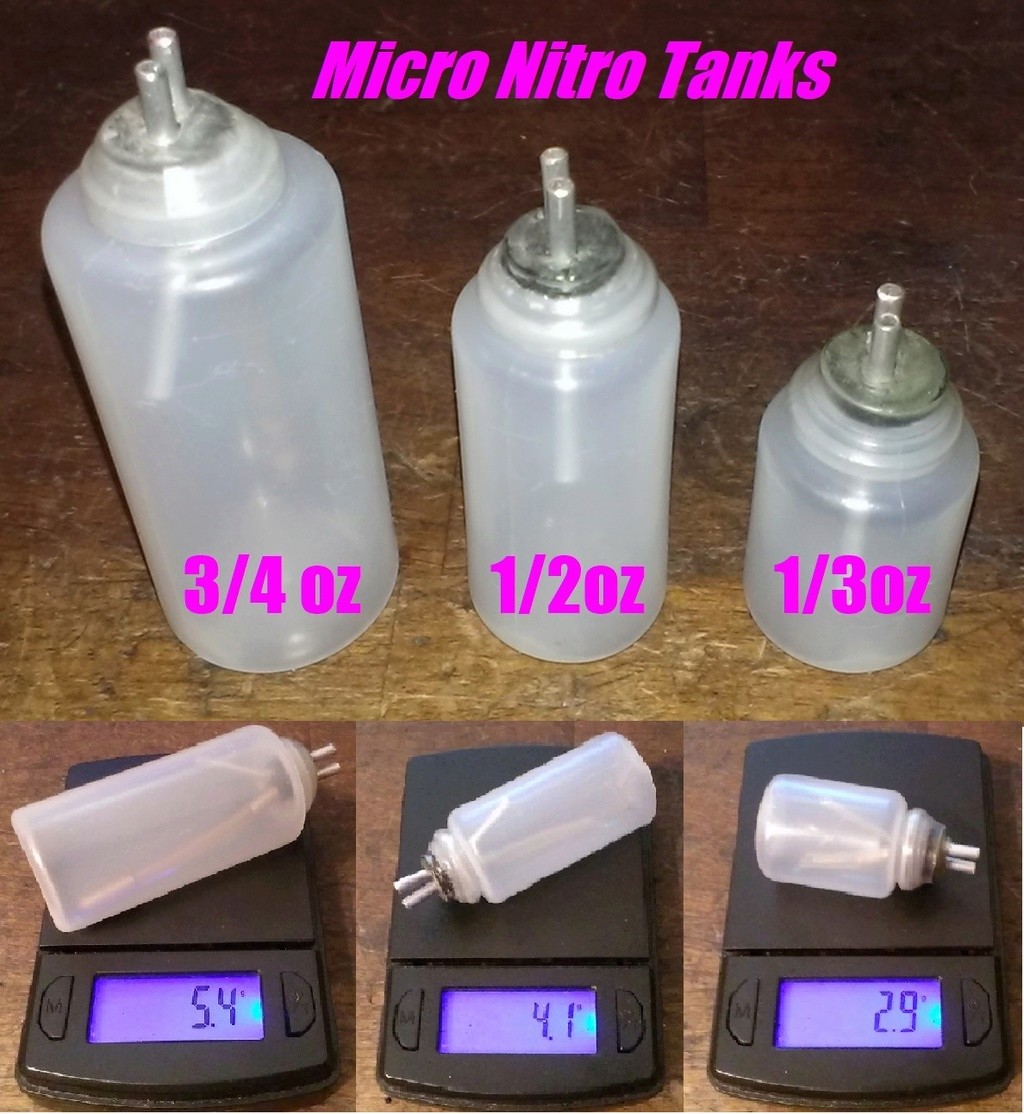 @1/2A Nut wrote:What are you using for a battery?
Perhaps with the bottle there will be room for the battery up front with the tank?

34.2mm wide battery opposite of the prop torque as shown:

20.9g wire lead is elevated off the table at the end

About 30g with battery under that front hatch.

I've been enjoying this thread immensely! Brad.. I have that same 200mAh LiFe 6.6V receiver pack. Do you step-down the voltage to 6.0V? I'm concerned about frying my receiver. Is there some sort of diode or regulator needed? I'm assuming that you run that battery in your Nano-flyers.. especially the .010-powered one?