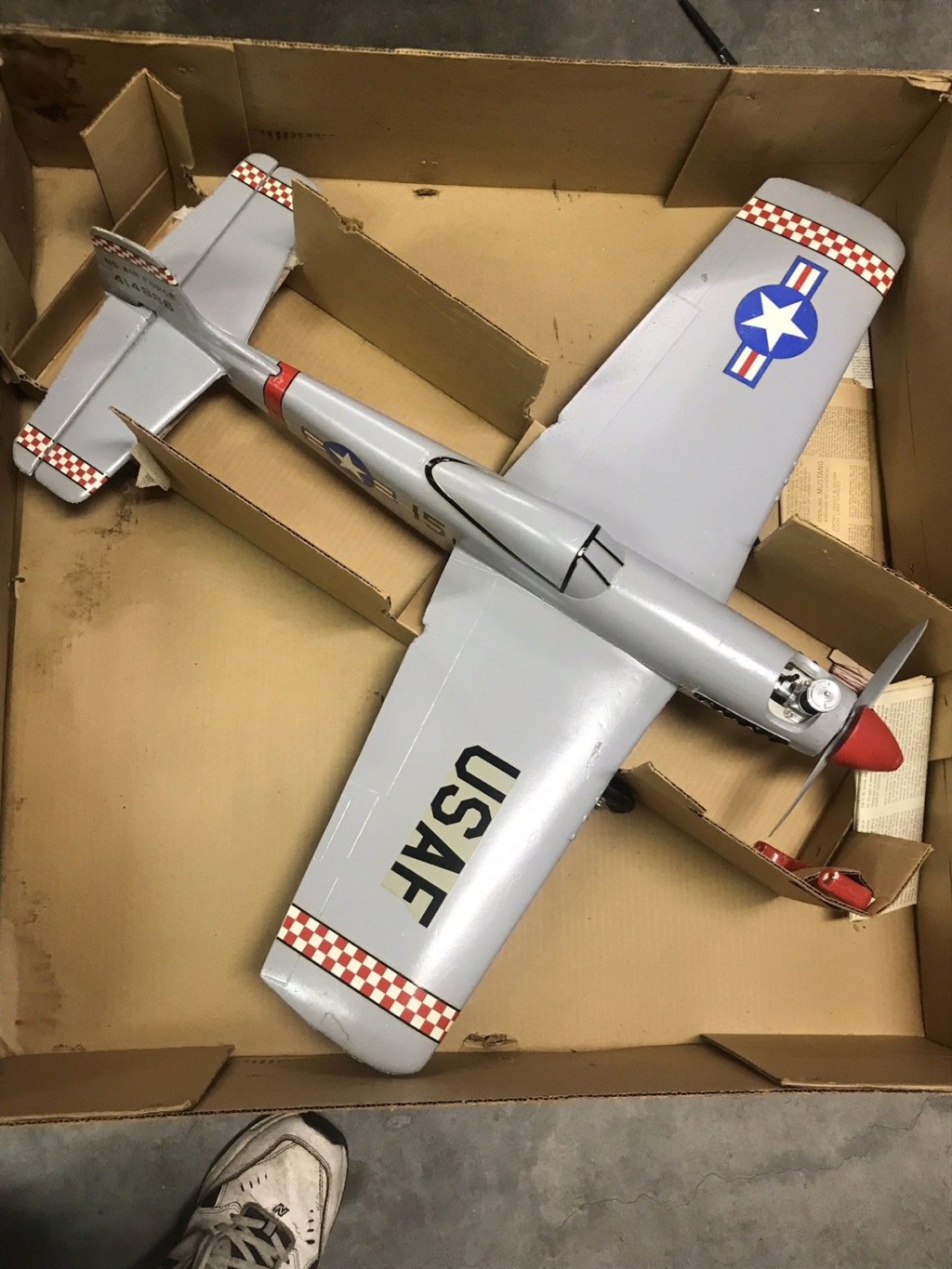 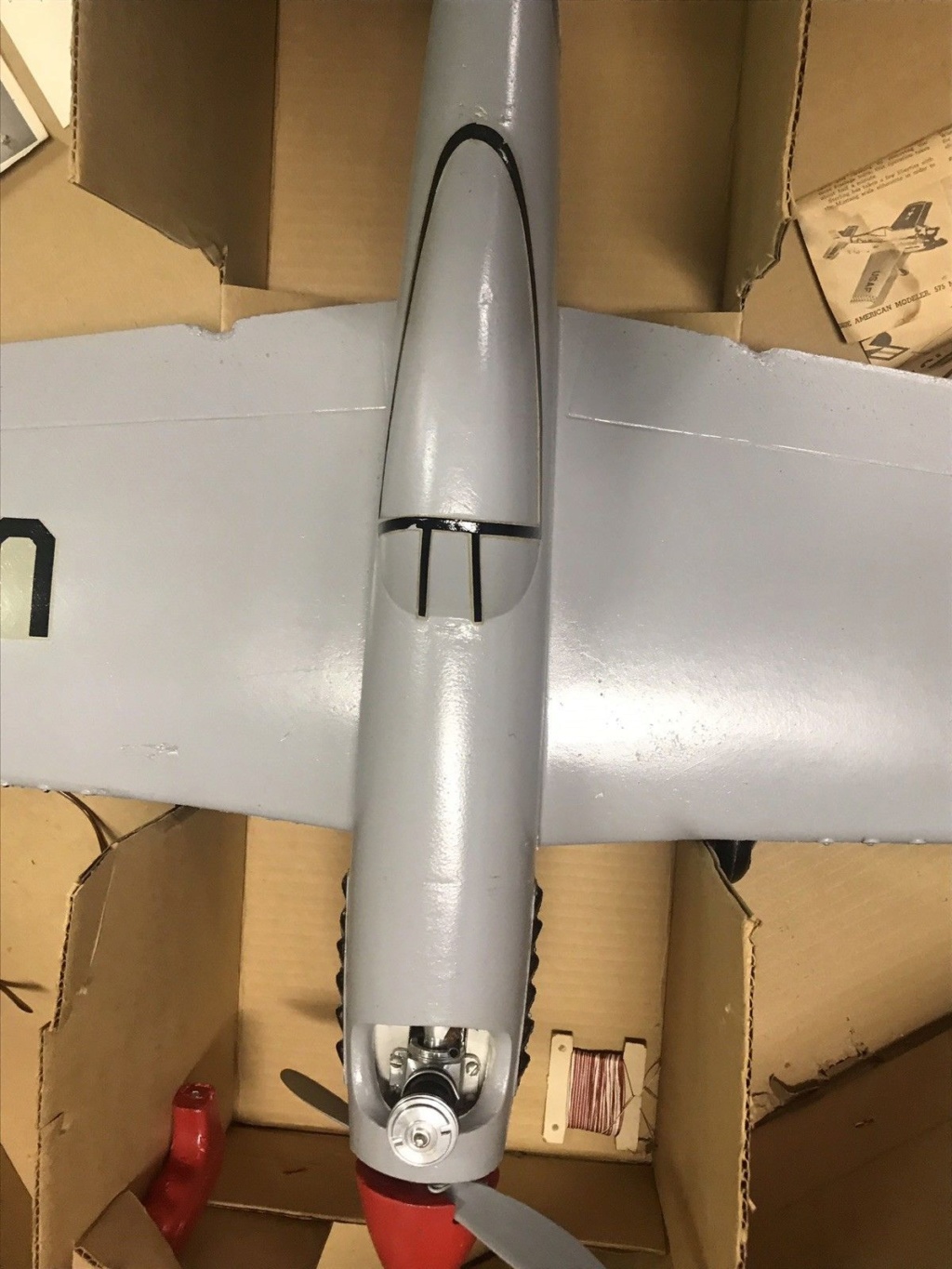 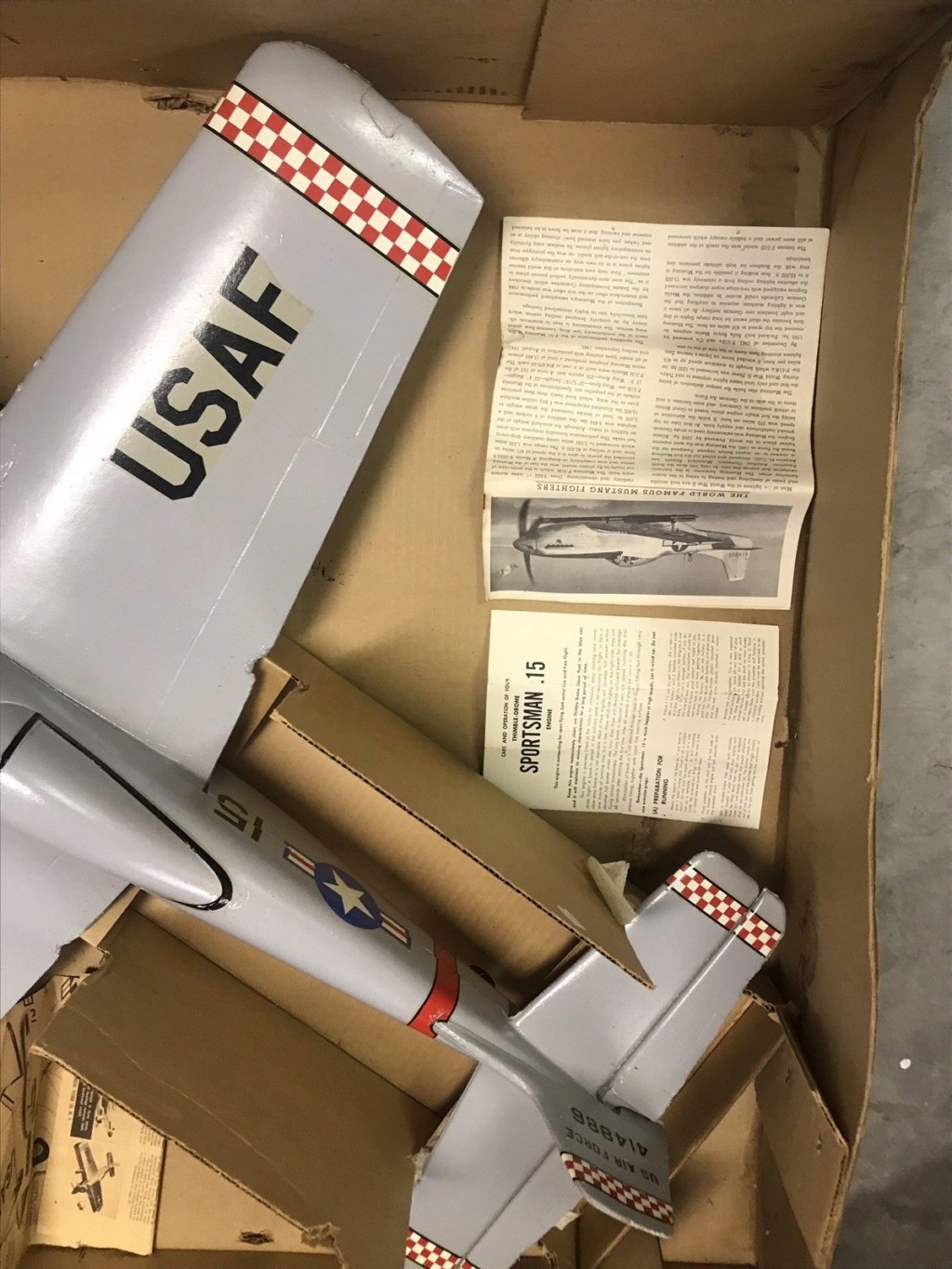 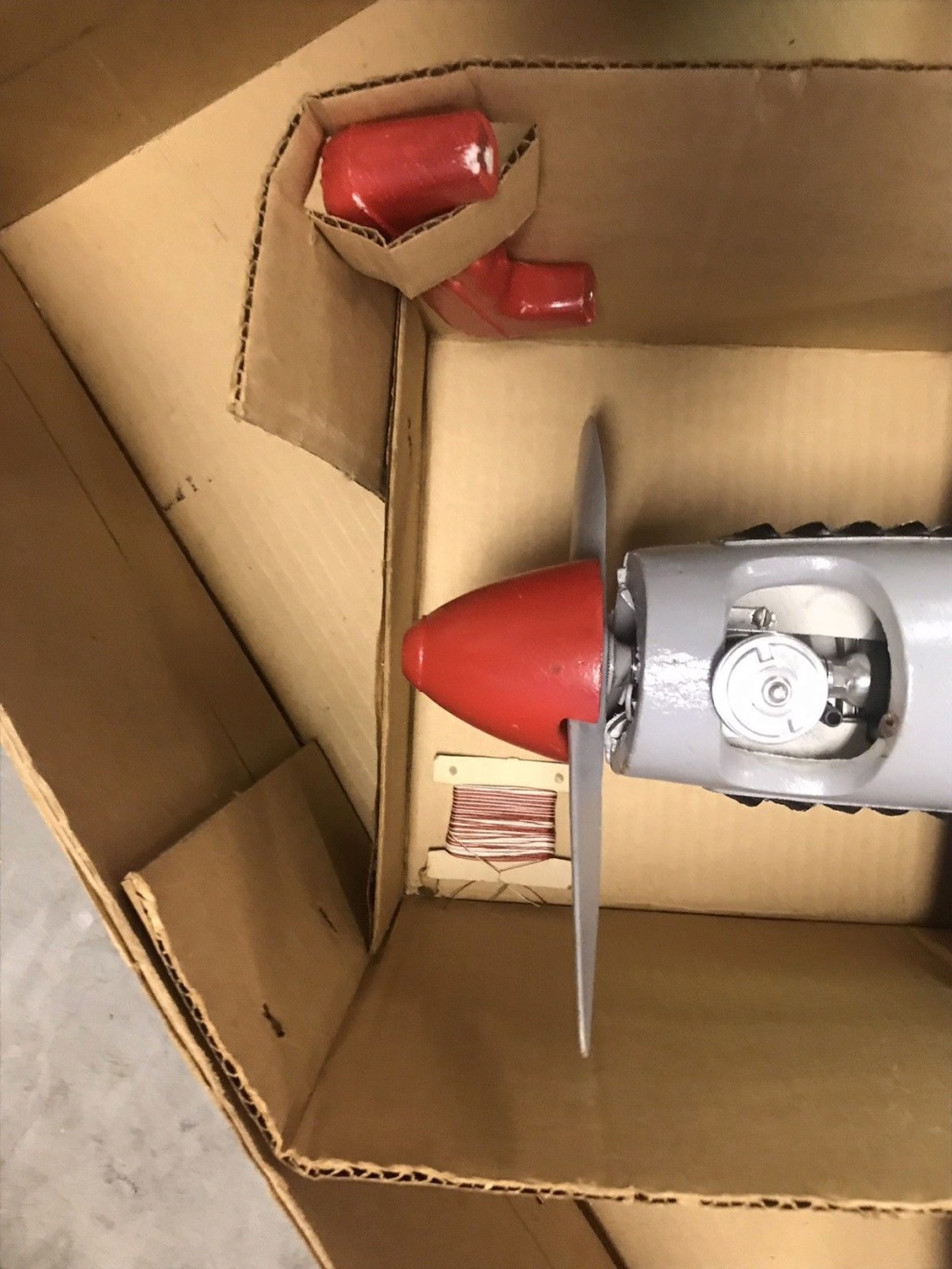 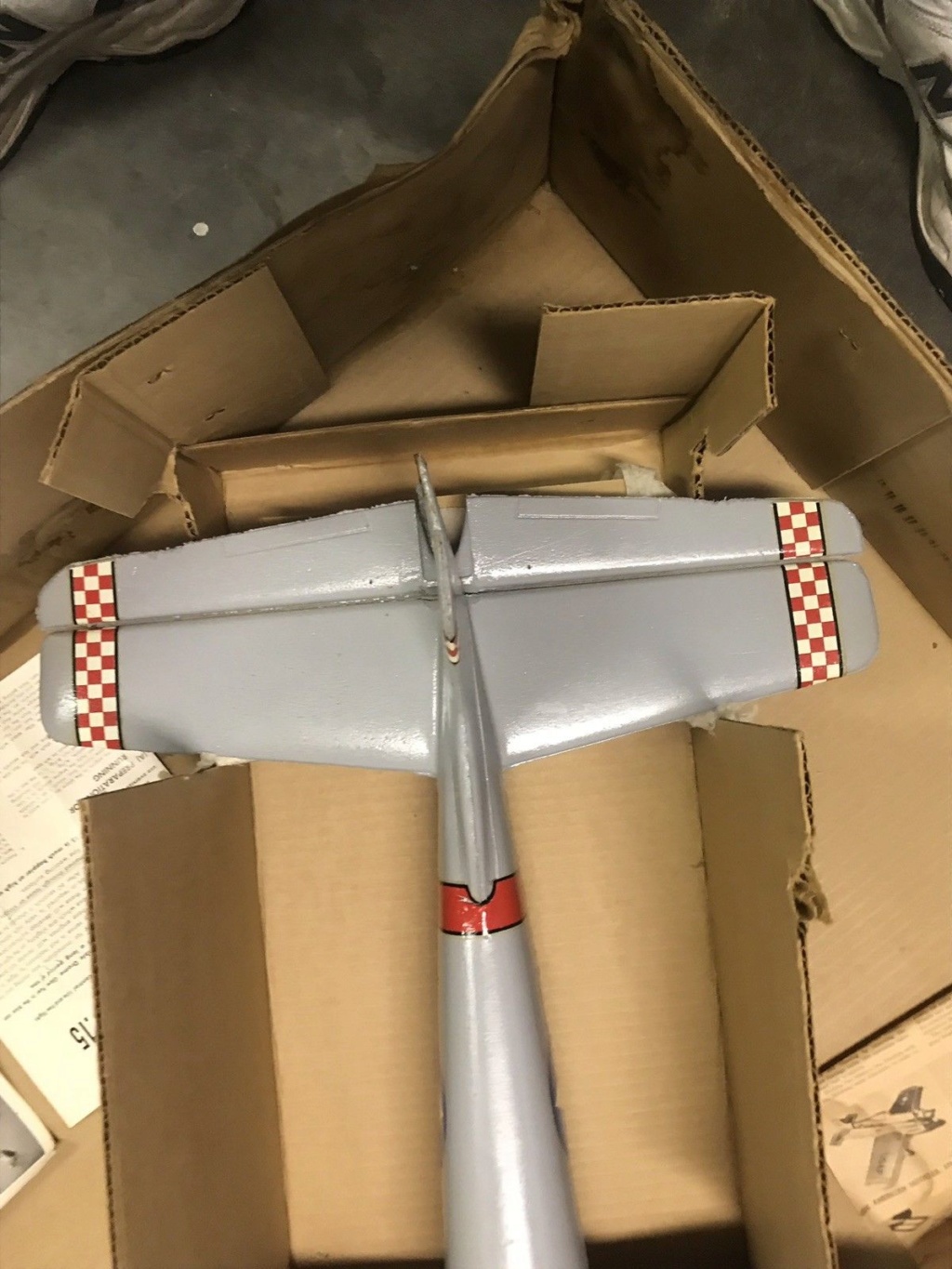 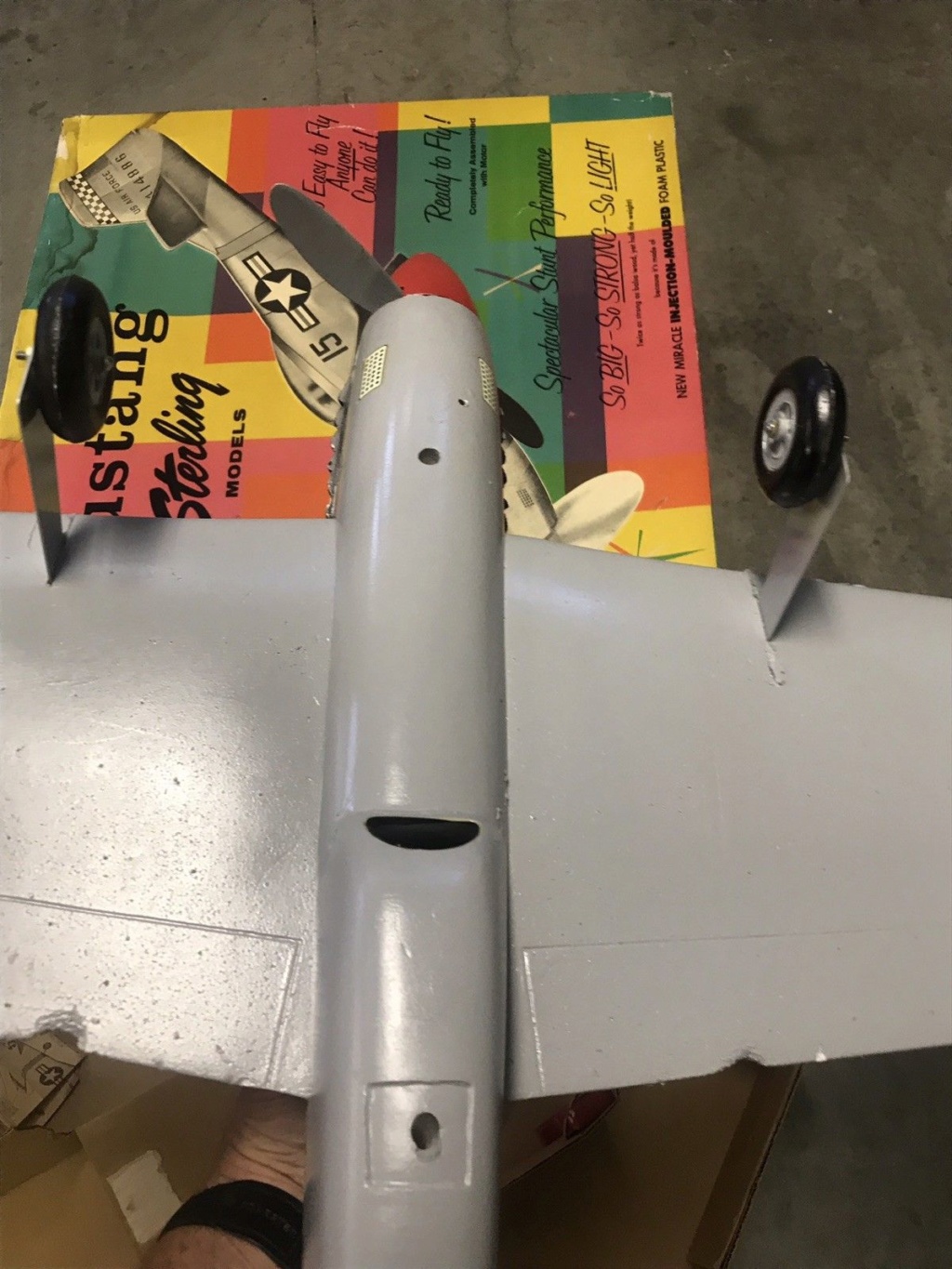 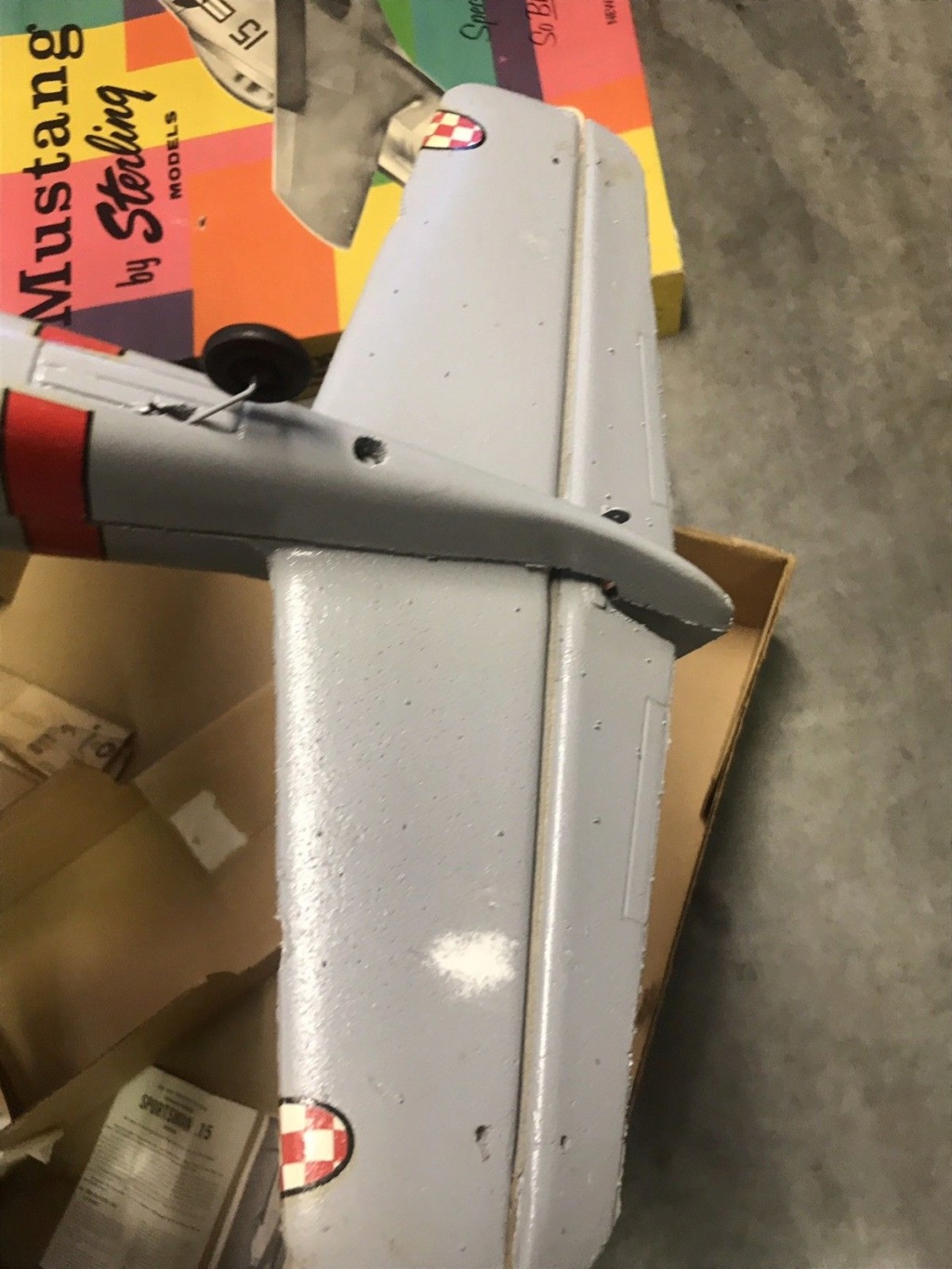 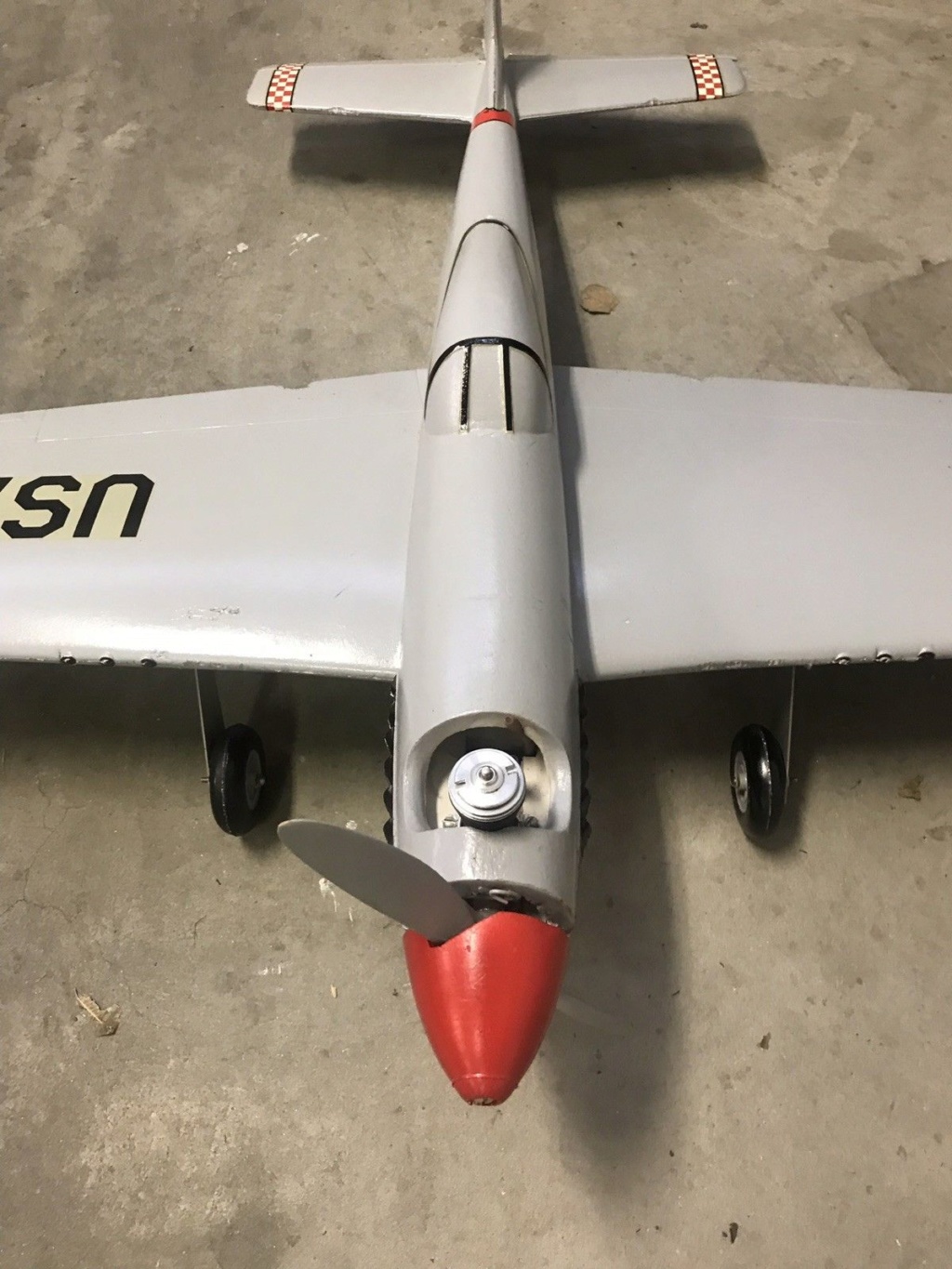 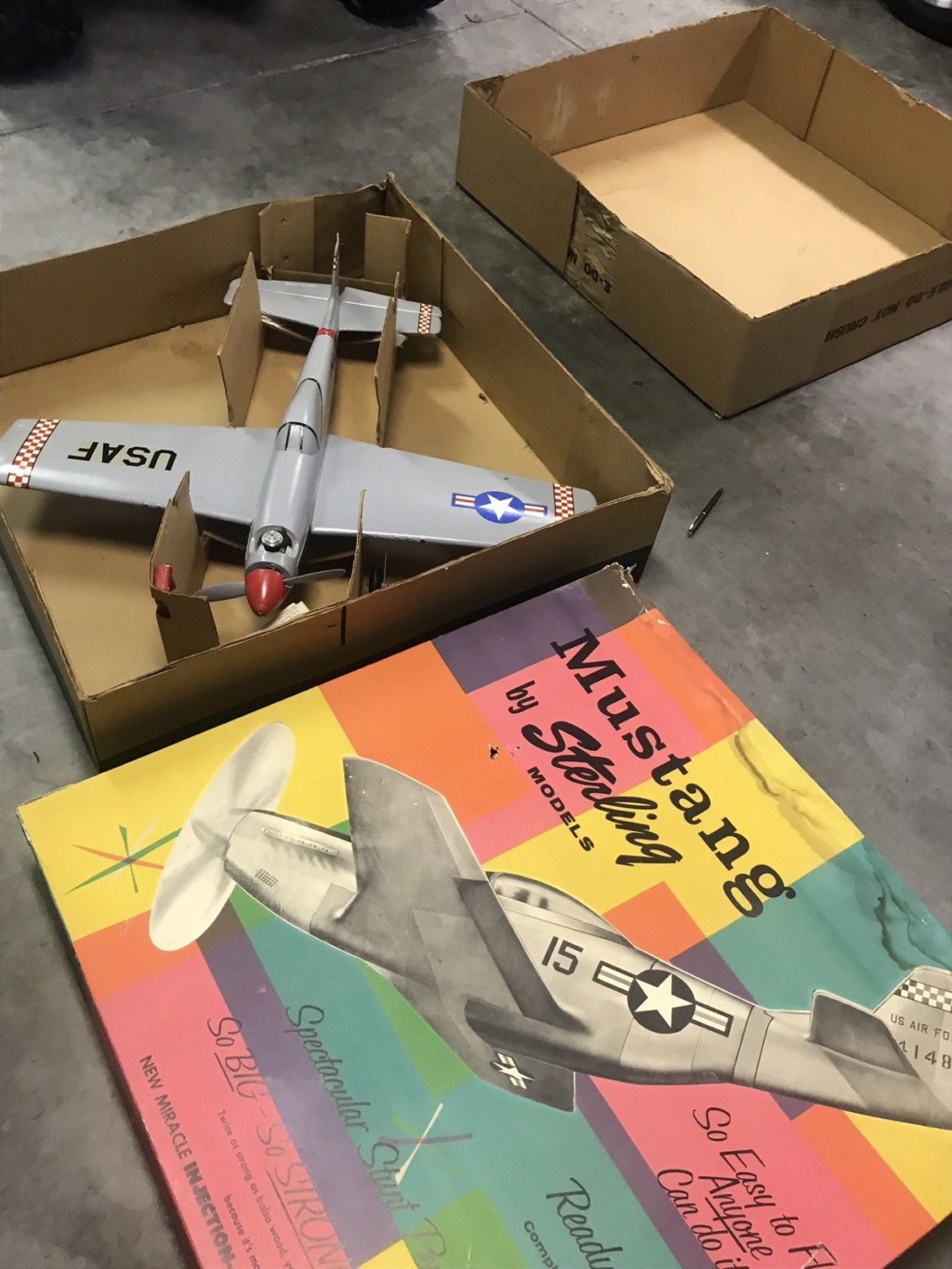 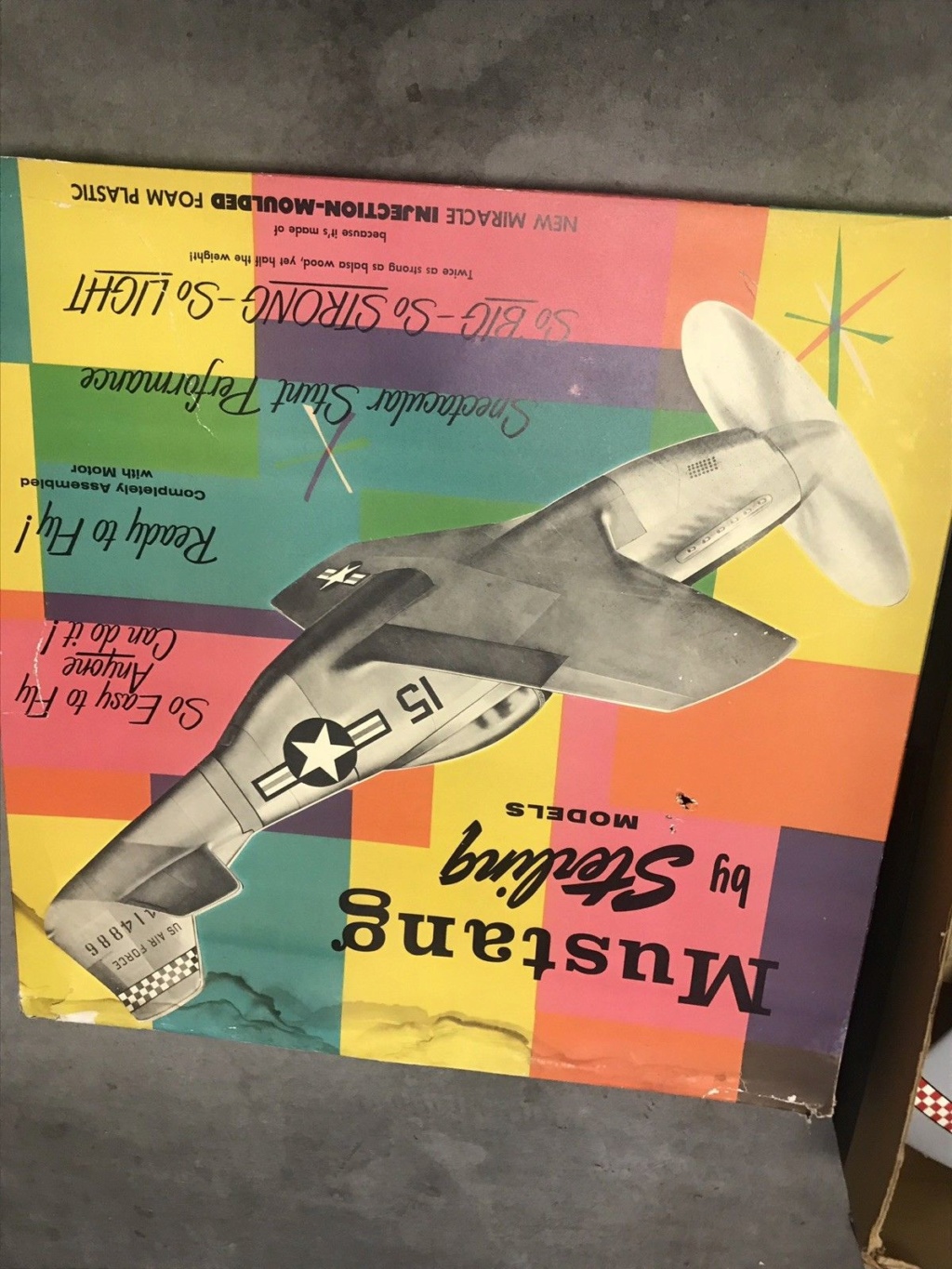 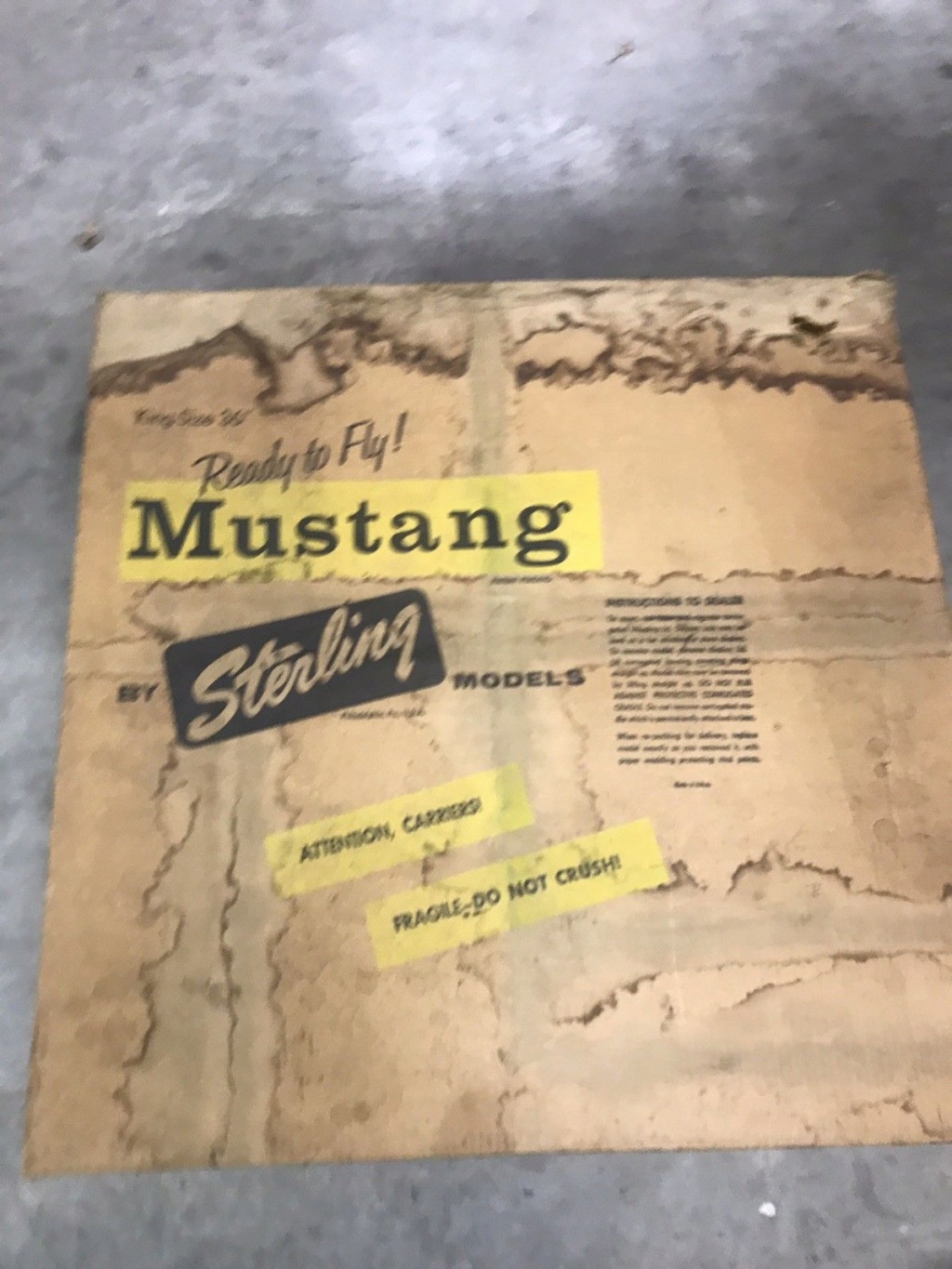 According to mh-aerotools.de, engine was produced from 1958 to 1965. Given that expandable foam was used to produce the RTF makes me think that this plane probably was produced some time in the early 1960's, but I could be wrong. I don't remember ever hearing about it, so it may have been a short lived item, thus making it very rare.

Anyone know much about this plane, and perhaps other large CL RTF's that may have been produced by Sterling along with competition? I imagine that it had very stiff competition from the less expensive .049 CL RTF's that made more suitable stocking stuffers, most modelers bought larger kits and engines and rolled their own, and as such was not a large seller.

What a great find, especially with that Cox Sportsman engine.

At that price it's a collectable.  Wouldn't want to fly it with that vulnerable foam already showing box damage to the way out of scale flaps.  But, being a P-51 fan I sure would love to own it.

To maintain perspective, not to long ago I bought a perfectly driveable 1974 MGB with the rare overdrive option for $866.  Drove it, enjoyed it, didn't just look at it.

But from a collectors perspective that's not an issue coming from a guy with well over 100 Enya model engines most of which just sit.   But at least they have potential.

Very interesting, very beautiful model. I didn't see this one in catalogs.

I have about a dozen decal sets for this plane. I've tried to use some and unfortunately they curl when placed in water. They release in pieces. My F-82 twin has the grille decal which is the square decal white background and black dots on it. They still adhere but they won't slide off the backing without falling apart. The two I used worked however. Sterling also did a large version of the P-51 for r/c which was a RTF.

The RTF Sterling Mustang came up a couple years back. I have no idea what the thread was titled.

I have also seen it advertised in MAN. 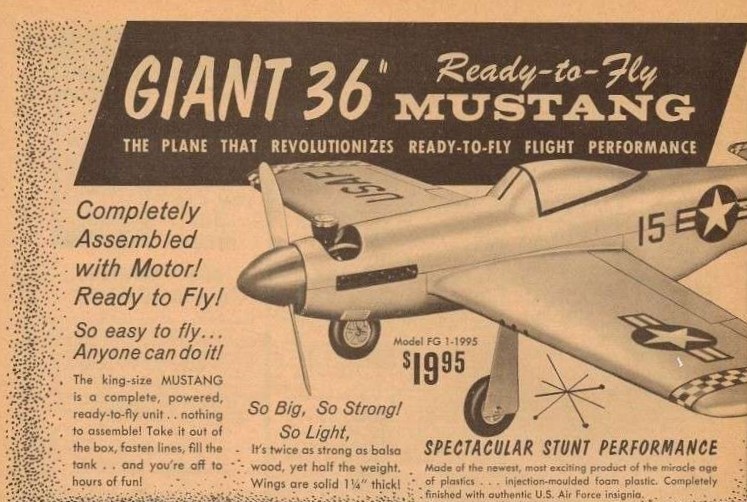 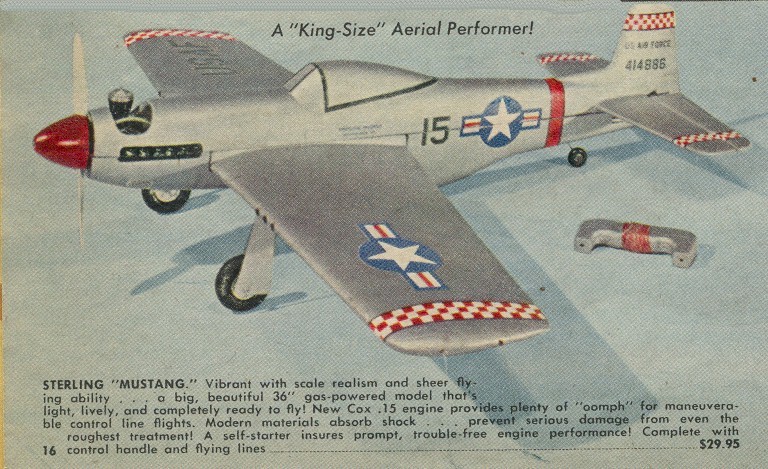 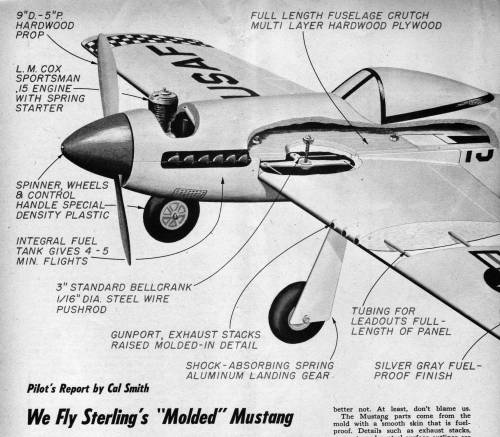 The plane looks like it would fly pretty well. Also a curious detail here in that the retail price ranged form 19.95 to 29.95. It wasn't on the market long enough for any of that level of generalized inflation to occur

Well, if it wasn’t on the market long, it probably started out at $29.95 and dropped to $19.95 until it was dropped altogether.

Or, perhaps the end of the Cox .15 Sportsman production in 1965 provided a convenient ending point for the P-51?

The provided prop is a pretty big load for that engine.

The Sportsman is nothing to brag about, it has ample power and that 9x5 would make it a complete turd. A 8x4 loads the Sportsman engine. It offered equal power as the Fox steelfin with the exception of being slightly lighter. The Fox .15X will run circles around it weighing not that much more than the Sportsman.

I did a little research on Sceptre Flight Engine Tests, sceptreflight.com Cox Olympic and Sportsman

Sept. 1959 American Modeler wrote:Both versions employ the triple periphery jet system and needle valve set-up used previously on the .049 Space Hopper. .... Like all reed valve engines, these .15's will run equally as well in either direction. ....

The Sportsman is recommended for control line sport and stunt. The Olympic for FAI and speed events. From our tests which confine themselves to manufacturers recommendations as to fuel and props, the Olympic outperformed the Sportsman by only 500 rpm. However, it is our opinion that the use of "toothpick" props and high contest nitro fuels will bring out the true power potential of the Olympic. This is one engine with all the design qualifications for truly sustained high speed operation.

Not sure why Sterling would select a 9x5 prop unless given the particular specifics, the particular 9x5 may be pitched in a manner that was perhaps like other 8x4's, etc.

Found this of interest to note:

The Sportsman lacks crankshaft ball bearing support, is plain bearing; compression ratio at 6.2:1 is low, and it is a reed valve engine. My personal limited experiences with the Cox reedies in general is that the are good torque engines and are capable of turning larger props with ease, benefiting slower aircraft that are more draggy.

Plus, in a CL setting, one would be running the engine in a richer, most likely wet 2 setting, perhaps breaking into a lean 2 in manoeuvrers. I just think that had Cox continued a .15 reedie, perhaps with modifications to make it less expensive to manufacture might have provided us with decent sport power in a larger size.

But I see your point, Ken, similar to the short lived .074 Queen Bee, the cost to manufacture this engine without added performance advantages over the competing .15's from other manufacturers lead to it's demise and reed valve technology for larger engines being discontinued.

Given that the plane was easily 3 times the cost of the prevailing .049 RTF stocking stuffers would help to explain its demise. Those who wanted larger would simply resort to building their own from kits. Around the mid 1960's, the RC bug was biting even stronger with model rockets following shortly after that.

As it is, now it is a collector's engine, clean, polish and put into the display case.