Flying a pattern at the Triple Tree contest.

Flying a pattern at the Triple Tree contest.

It's late so I can't post one of my classic stories tonight, but here it is in a nutshell. Not much of a performance today, but I did get the handle in my hand and had good fun. Maybe I can embellish and fill in the gaps later this morning. I once again could not have done it without my good friend Mike Londke. He looked after me and made sure I survived uninjured. Thanks Mike for making it possible. He had to bear hug me to keep me on my feet a couple of times, before I finally gave out.

So here's a quick paste job about the event on Facebook. Search FB for "Control Line Flying". And we're super proud of Sam, he's leaving a pile of us old guys in a smoking heap as he advances.
Rusty.

I had a great time Thursday up at Triple Tree, and then again Saturday, yesterday, at the Stunt contest. I flew on my own two legs with the cane, and was edged out by my friend, 10 year old son, Sam Londke. I was only able to do half the pattern, meaning 8 of the 16 maneuvers, before my failing stamina got the best of me. I did fly some good shapes for really good points while I was still up with Sam's dad Mike in the circle with me. He had to catch me a couple of times from stumbling, and I finally handed the handle off to him and went down(not so gracefully) to lay on the grass while he flew out the rest of the fuel and landed.

But I did get another glass trophy for 3rd place. I scored well on 4 of the 8 stunts I completed with 30 or more of the possible 40 points for each maneuver. The rest were horribly executed due to my stumbling. Lucky for me, only 3 people flew in my skill class, so 3rd place was just automatic no matter what would have happened, I still got a trophy.

But, what the heck, I got some time on the handle and I think I can be competitive by October with some good exercise and more handle time.

Scroll down that FB main page I mentioned, and you should see pictures of me, Sam and the 1st place winner, Charlie. I was flying a Stunt trainer that Wayne and I built back in 2015, called the IDS(Intermediate Death Star). I just entered Intermediate, but by October I hope to be back in Advanced.

So that's a wrap for Spring 2019. And it's really good to get out there with all my flying buddies. That's the best part. I even got a little clapping ovation too, Lol. 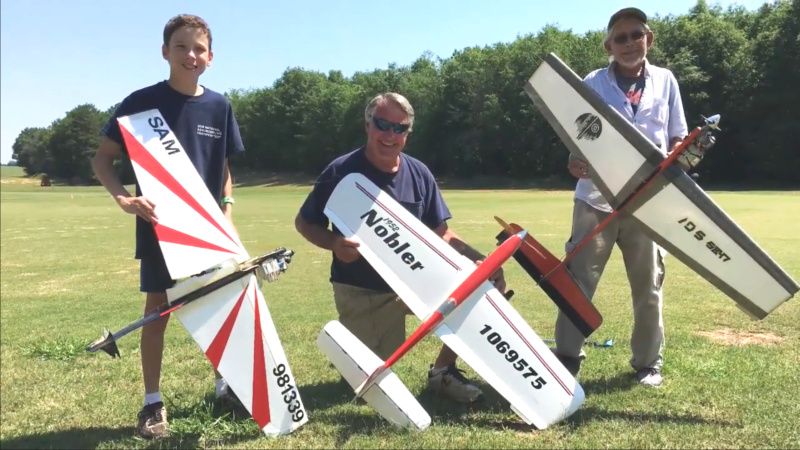 Here's a great video by Will Davis too:
https://youtu.be/WzaUnG3m-l4

Wow. Watching that guy doing the pattern from the 6.37 mark is just poetry in motion. Great stuff!!

Way to Rusty , Thank You for the Video , More flying would bee better but still nice to see all the people and fields and O yes the Planes !!! Good once again to hear your getting some fly time in you old die hard you Brother !!

That IDS is THE sweetest plane I have ever flown. I may well have moved up earlier if I'd ever tried it out.

I wrote more but couldn't post it when the forum went dark yesterday. I saved it in Notepad, so I'll fill out the story when I get home later. There'll be plenty to talk about on the show tonight too.
Rusty
_________________
Don't Panic!
...and never Ever think about how good you are at something...
while you're doing it!

Saw this on RC Groups.... been bummed for a while with all my CL planes and no longer able to fly

These sophisticated foamy models may let me play airplane in my front yard.....lots of space but NO CL as I am surrounded on three sides by High Tension power lines.... CL circle will always be way too close for my comfort

Here's the post I couldn't submit yesterday. It crashed while I was posting a reply at about 3:25 pm. Luckily my text stayed intact in the Chrome history.

So, I was replying to Rod as follows...

Oldenginerod wrote:Wow.   Watching that guy doing the pattern from the 6.37 mark is just poetry in motion.  Great stuff!!

No kidding, Rod. That's David Fitzgerald from California. He has won both National and world championships on the US team with that Thundergazer. He donated it to Triple Tree's museum and education center in a ceremony Friday. Derek Barry flew the last flight on it Saturday after it won its final contest in P.A.M.P.A. Expert Precision Aerobatics. Now it hangs with real historical significance at TT. It's unusual in that most of the planes on display were purchased for that purpose.

Everyone has a different flying posture, but the significance is consistency. Make the exact same motions each and every maneuver on each and every flight. You can tell the wind was almost zero by the backtracking he does to keep it out of its own wake.  no bobbles and exactly the same amount of lift on every pass. Like flying on rails.
Rusty

Just look at that wrist action from 2.56!! It just seems to happen so naturally.
It would make a great training video.

More sights and sounds from TT.
I know watching a Stunt pattern can be boring to most spectators, but I can't help that these world class pilots fascinate me so much. So for those who'll indulge me, here's Derek Barry bustin' out a nice one... from the wrong side, because the breeze flipped the circle again.
Rusty

Something’s not right. He had to step back on the outsides. What was going on Rusty?

Ron, it looks like he walks backwards during most of the stunts that are made up of consecutive passes. It wasn't dead calm air, which poses the danger of losing lift when flying through a hole in the air made by a previous pass. That can cause loops to grow larger, or fail to pull out at all.

In this case, Derek is probably is avoiding the wake from previous passes, which could cause points-robbing buffeting. So a step back on each loop keeps the plane in clean air. Then watch him return to center on the two laps prior to the next upcoming stunt. I'm pretty sure that's what we're seeing.

In David Fitzgerald's video, he makes it even more obvious on the outsides, but not the insides. That was also a practice flight on Thursday, I think. The wind conditions were basically the same on all three days of pattern flying. But if a steady breeze blew through during one set of loops, maybe he didn't feel the need to seek clean air.
Rusty
_________________
Don't Panic!
...and never Ever think about how good you are at something...
while you're doing it!

Similar topics
» Flying at Triple Tree, MCLS Meeting - August 25th, 2018
» Triple Tree all to ourselves
» I finally pulled it off at Triple Tree
» Twas a beautiful day at Triple Tree - Scores posted and maybe a video coming.
» 2 guys flying the pattern.. together